My first 10K race was Sentrumsløpet in 2014, which happened right in the middle of my peak Ultrabirken training. I signed up, pretty spontaneously, two days beforehand, just to see what I could do. I had fun, ran a huge negative split and finished in 47:21, convince I could do better. With that thought in mind, I signed up for Hytteplanmila, purportedly ‘Norway’s fastest 10K’, nearly 6 months ago. It’s also one of Norway’s most competitive 10Ks. I also signed up my mom, who has been making huge strides in the training the last couple years, so she would have something fun to train for. Dad also eventually signed up, as did Audun; this was going to be a family event!

I had this idea that I would put in six weeks of quality training for the 10K to round off my running ‘season’ (not that I’ve raced that much!), but I had a bad cold for the first week, still getting rid of the cough from the cold for the second, and then we went to Croatia and put in 600 kilometers for cycling. So yeah, not the optimal training cycle! I had a few good interval and track sessions though. Reassuringly enough, my last track workout the Wednesday before the race was great; I did 5x1000 meter progression intervals and texted Audun after the workout: “45 minutes. I think I can do it.” 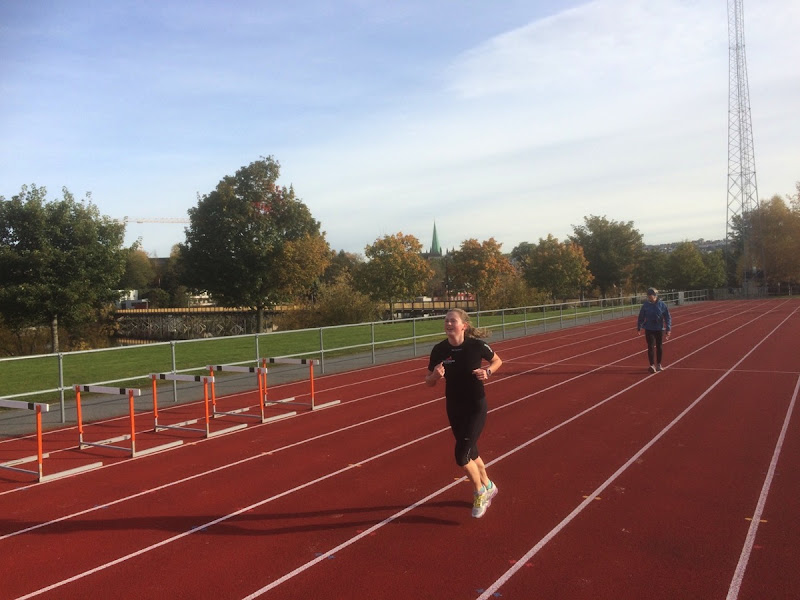 Last track session before Hytteplanmila at Øya in Trondheim in gorgeous fall weather. Photo by Dad.

It felt cocky to be trying for a PR of over 2 minutes, and as race day drew closer I grew more nervous. I feel that my nerves before a race are like stage fright; they prepare me for being ready in the moment and I usually perform better if I’m nervous first. Mom, Dad and I all arrived in Oslo by night train from Trondheim the morning of the race, and we stopped by my apartment to cook a good breakfast of pre-race pancakes with apples and almonds. These high-protein pancakes were the perfect thing, as I was too nervous to eat much lunch before the race and they stuck with me well.
Following a 45-minute drive to the race location, we picked up our bibs and commenced to mill around with the 1900 or so other people who were running. Audun and I put in at 25 minute warm-up with some strides, scouting the last part of the race course. The last 300 meters of the course were a brutal uphill in an otherwise fairly flat course. “This is going to hurt!” Audun remarked, and I could only agree. 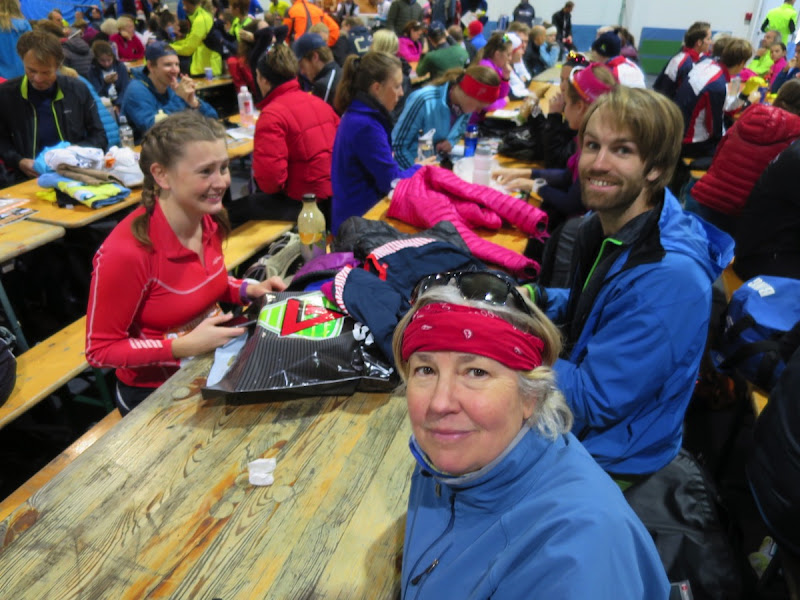 Waiting for the race to start. Photo by Dad.

Everyone started at the same time, but we were supposed to line up with the appropriate pace group to smooth things out. So Audun went forward to find the sub-40 minute group; I lined up with the sub-45 minute pacer, and Mom went back to the 60 minute pacer. Dad had unfortunately injured his calve a couple days before and was acting as the official photographer.

Standing alone in a sea of people before the start, I mulled over my race strategy: stick with the 45-minute pacer, and see if I could pull away from him in the last couple of kilometers for a sub 45 minute finish. But I would also watch my heart rate and keep it at a reasonable level. The magic number is 189: pass that and I am certain to crash and burn in anything but a sprint.

Bang! The start gun went off and the movement of the front runners soon propagated back into the pack. We were walking, then jogging, then running. I had no choice about my pace; I was surrounded by people and we were moving as a single mass inexorably forward. A man ahead of me was sporting compression tights, a water bottle fanny pack and had a banana in each hand. Really? Do you need all that for 10K? I thought.

The first kilometer was flat and then downhill, and we were moving fast. The sounds of hundreds of running shoes slapping on the pavement heavy breathing filled the crisp fall air. I didn’t dare look at my watch at first, not wanting to remove my eyes from the pacer for fear of him disappearing the crowds. When we passed the first kilometer sign I sneak a glance: 4:05. I nearly gasped; I was hoping to average 4:30 /km pace; this was practically suicidal! Well, this section had been mostly downhill. 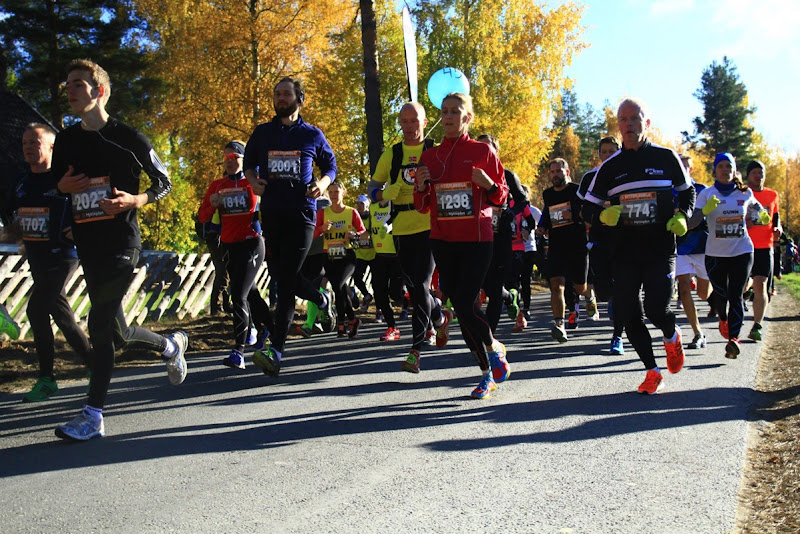 The 45 minute pacer, who ran way under 45 minutes! I’m somewhere in the group behind him. Photo by Hilde Oline Selte for Hytteplanmila.

The pacer slowed down, but just barely, at the bottom of the hill. Suddenly I saw everyone ahead of me running around something. As I jogged by I saw that a runner had collapsed and a group was performing CPR. I was horror-struck. What had happened to him? Was he going to die? How could we all just keep running like this? But there was nothing to do, apart from make space as the ambulances rushed in.

The road started to climb, gradually for someone who is used to running in the mountains and forest, but steep enough to slow me down at this hard effort. I struggled to keep up with my pacer, but even before I glanced at my watch and saw that my heart rate was 190, I knew it was useless. I had to run my own race. I let him pull ahead and found a comfortable rhythm up the hill.

The road rolled along for the next kilometer, and the pacer only had a 50 meter gap on me. Although I was focused on keeping my tempo up, I couldn’t help but remark at what a beautiful fall day it was. The fog of the morning had burned off the a perfect, if slightly chilly, sunny day.

The course started a descent towards a larger road, and I could see hundreds of runners stretched out ahead of me in the distance. OK, use the downhill, I told myself. Let your legs roll, and you’ll catch the pacer. As I tried to cruise down the hill, I developed a severe cramp in my abdomen. It kind of felt like my stomach muscles were trying to detach from the rest of my body, and it was so painful I actually teared up. Oh my god my race is over! I thought frantically, before trying to correct the negative thinking. You can still fix this. Breath in. Breath out. Don’t stop running.

It was flat and easy terrain now, and I wanted to speed up and catch my pacer, but I could barely keep myself from not walking. I passed the 5K sign in just under 22 minutes, and realized that the pacer wasn’t going to be running 45 minutes; no, he would be running much faster. I abandoned my race plan and decided to run completely at my own pace.

I slowed down slightly and tried to breath, hoping the cramp would pass. Slowly but surely it eased up and I sped up a little, praying it wouldn’t come back. The lyrics of several songs drifted distended through my mind… Young the Giant’s ‘My body’ suddenly came on full blast. “My body tells me no, but I won’t stop… cause I want more!"

As we turned off the main road, the course headed slightly uphill again. The carnage of the first 5K were starting to show; some people were starting to walk, and one guy was doubled over like he was about to vomit. A 10K is a hard distance, but I hoped that by keeping my heart rate under the magic threshold I wouldn’t blow up.

This was starting to hurt, when would we reach the top of this infernal hill? I thought about slowing down; I could almost certainly PR if I let up just a little? NO! the Competitive Instinct that lives in my head shouted, you have to run this as hard are you can. Come on, it’s only going to hurt for another 15 minutes. The sun was in my eyes now and I regretted not wearing sunglasses. I saw that the course would duck into the shade soon and used that as motivated to keep running hard. 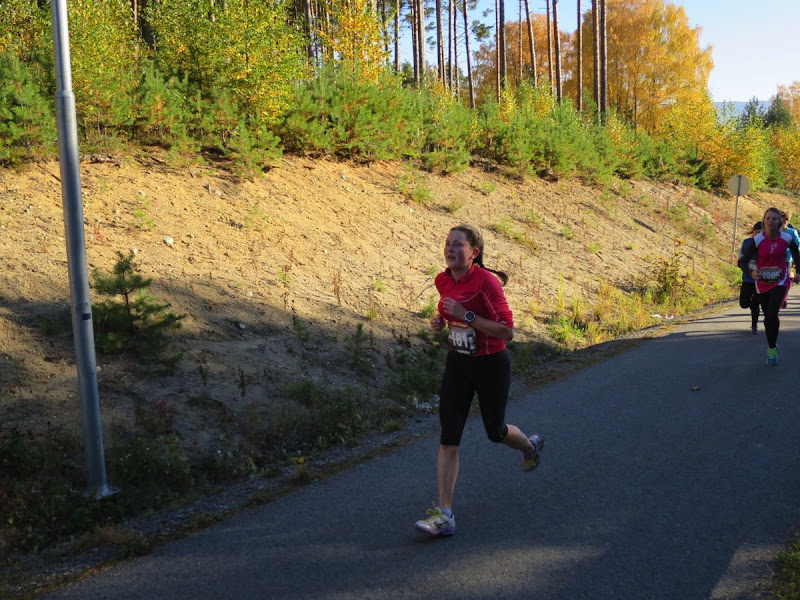 Don’t stop now don’t stop now. If you pass the 9K sign in less than 40 minutes you only have to run the last K in 5 minutes! That’s easy, right?

I had reached the final kilometer, and picked up the pace another notch. I dodged past a couple of women and grimly noted that I was moving up a couple places in the rankings, not that that really mattered. As I passed the 800-meter to the finish sign, I tried to my encourage myself, thinking, that’s only 2 laps around the track! Bad strategy - that sounded terrible. So I just stopped thinking altogether and started running.

Suddenly I was rounding the final corner and heading up the dreaded hill to the finish. It was easier than I feared, at first. Then I saw Audun, sweaty and wearing his finishers metal, and decided that it was time to start sprinting. The hill went from ‘not bad’ to ‘please don’t let me collapse this close to the finish line’ pretty quickly. A photographer from the race organization caught the moment pretty well: 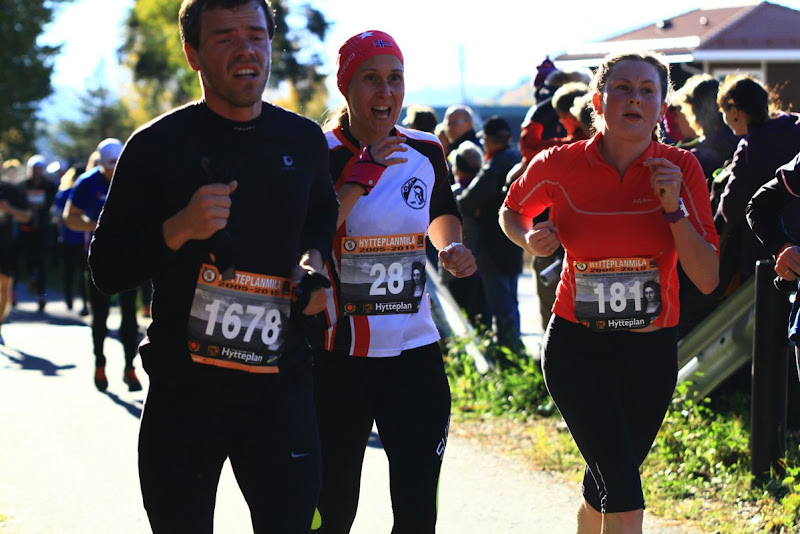 Pain embodied in my face. Photo by Hilde Oline Selte for Hytteplanmila.

I crossed the finish line, swaying and dizzy. I later learned that although finished 107 of 635 women, I ran the 53rd fastest time up that final hill.

I had broken 45 minutes, and set a PR by 3 minutes! I feel this is both a product of training and also experience in the 10K distance. I started harder at this race than Sentrumsløpet last year. Who knows how fast I can go with a little more training and experience? Mom finished in a solid 59:26 for her first race in over a decade, and Audun (being the animal that he is) ran 40:02. I like the 10K distance, and I think I’ll be running some more in the future. I also bought myself a PR present: my first pair of ‘fast’ running shoes, Mizuno Hitogamis. Excited to see how these work out for me next season! 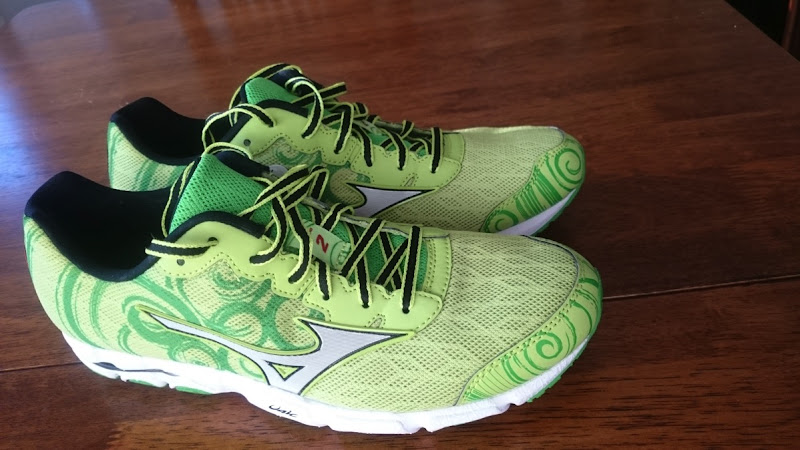