This is a story with several parts. If you haven’t already, check out Part 1, Part 2, Part 3 and Part 4
It rained all night in Vrsar and when we woke up the tent was covered in thick clay mud. All of our possessions including our bikes had been stored under in the tent garage, so they faired pretty well. The tent was a lost cause; we shook it off as best we could and packed the sticky mass of fabric into its stuff sack, choosing to ignore it until it could be cleaned properly. 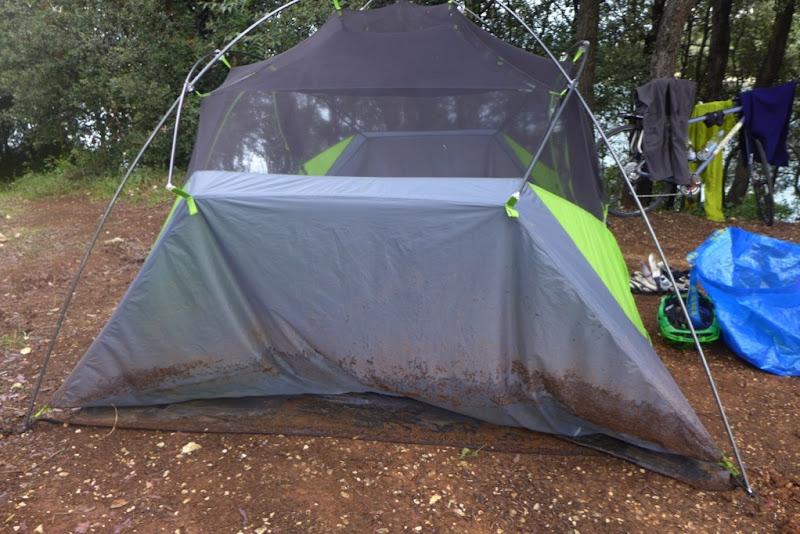 Muddy tent you say?
Clambering back on my bike and heading out of the campground, I felt like the rusty tin man. The first 50-odd kilometers followed the coast of Istria towards Slovenia, and I found them very touristy. Take these statues in front of the restaurant ‘Lord of the Grills’: 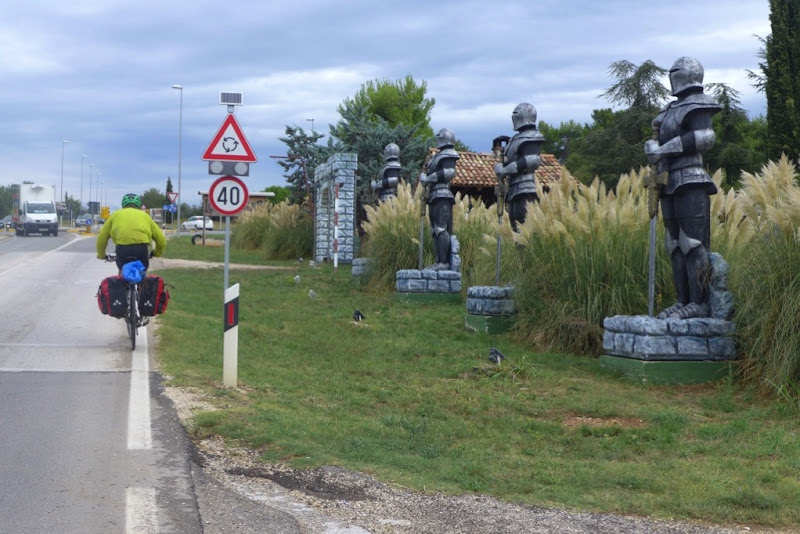 Lord of the grills. Possibly the tackiest decor I’ve ever seen.
We were on a busy road with cars zooming by, so we couldn’t really chat either. All of this put me in a rather black mood, and for the first time in the trip I put on a podcast (with only one earphone in of course) to entertain myself.
But the views gradually opened up again, and I put away my earphones and started to enjoy the ride. 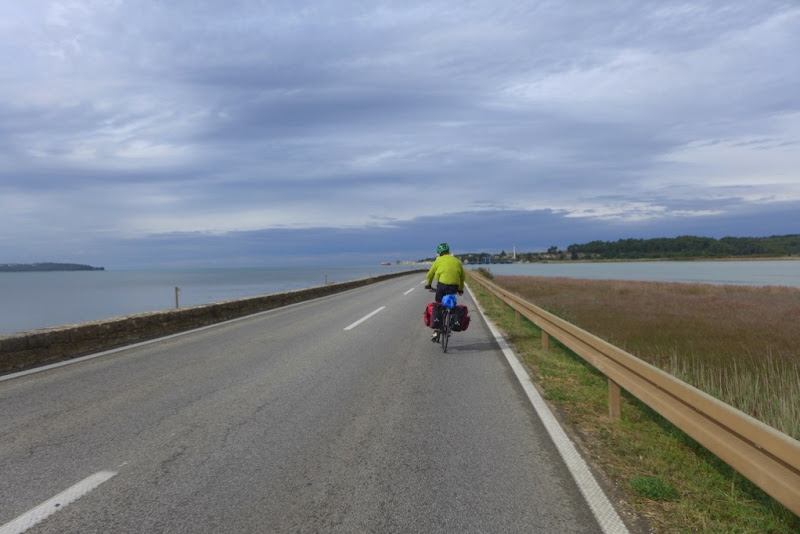 Sea and sky meld along Istria
We pedalled into our last city in Croatia, Buje, which housed not one, but two square towers. There we stopped for a lunch of more Nutella, cheese, sausage and the rest of our bread, which is what fuelled most of the trip. The cheese and sausage in Croatia were quite good. 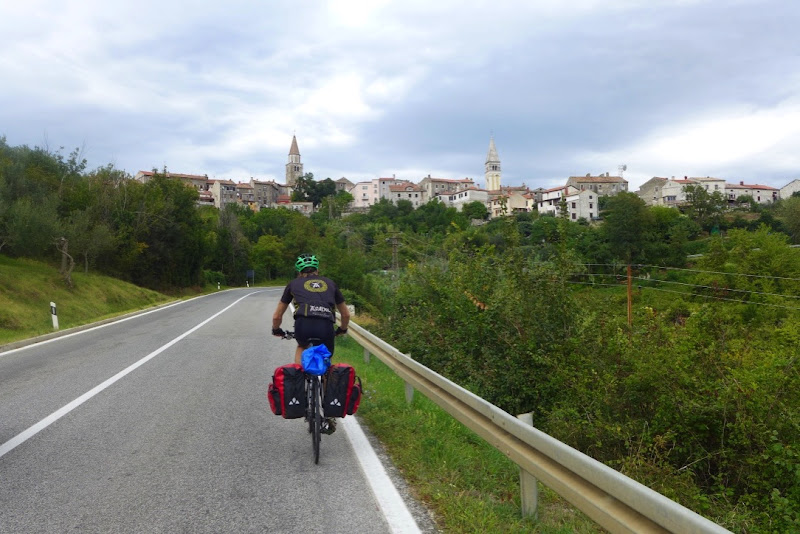 Entering Buje
Next was the Slovenian border crossing. This border defines the edge of Schengen, the passport-free zone within Europe. To enter Schengen in airports, you get your passport checked pretty thoroughly. I thought, with the refugee crisis going on not far from here, the border was bound to be a nightmare. Although there was a line, we basically just waved our passports at the guy and rolled through. He didn't even really look at them! 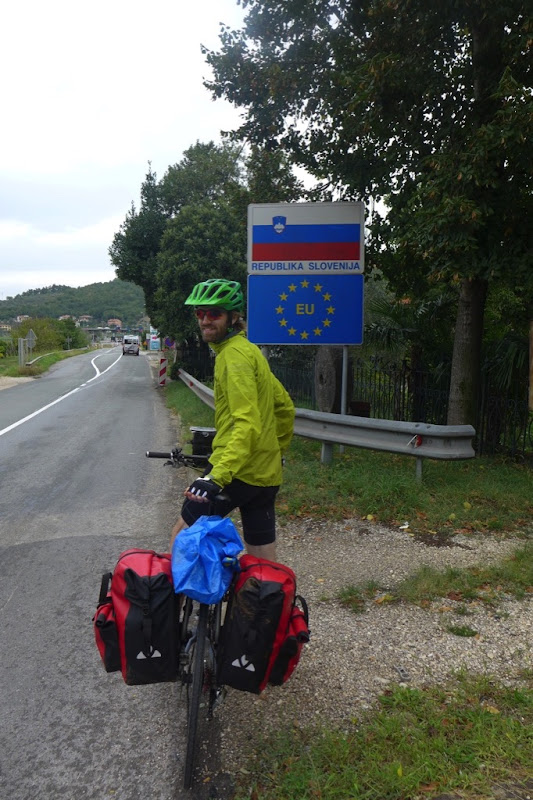 Welcome to Slovenia!
Although our original plan had called for a longer foray into Slovenia, we had been set back a whole day by the delayed ferries and would thus have to ride the shortest possible path to Italy. Bypassing the main highway, however, lead to a slightly more circuitous route. And by circuitous, I mean instead of following the nice valley, we got to climb 400 meters up to the hilltops, again. Post-depression of the morning I was digging the climbs though. The road had nearly no cars, and the switchbacks up through the forest reminded me of the road biking I used to do in France.
Plus, on the tops of the hills were more charming villages with - you guessed it - square towers. 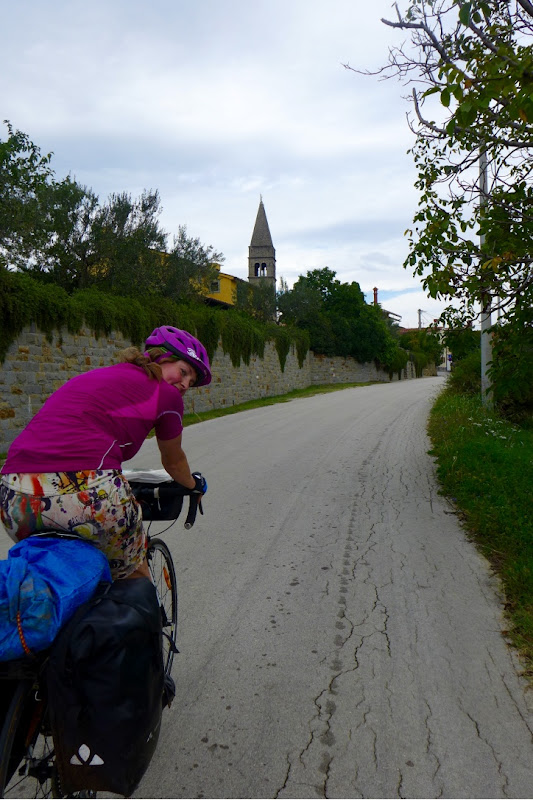 A tiny town in the hill country of Slovenia
A brake-screeching descent from the hilltops brought us back to the main road and reality. Now we would have to navigate through the crowded streets of Koper, and try to find a valid alternative to the enormous highway into Italy. As we stopped along a road in the outskirts of Koper to look at Google Maps, I noticed an official-looking sign. There was a stick drawing of a bicycle and an arrow, under which it said ‘Trieste’. Trieste, of course, was exactly the Italian city we were trying to get to.
Audun and I looked at each other and were immediately in agreement to throw navigation to the wind and try this bike path. 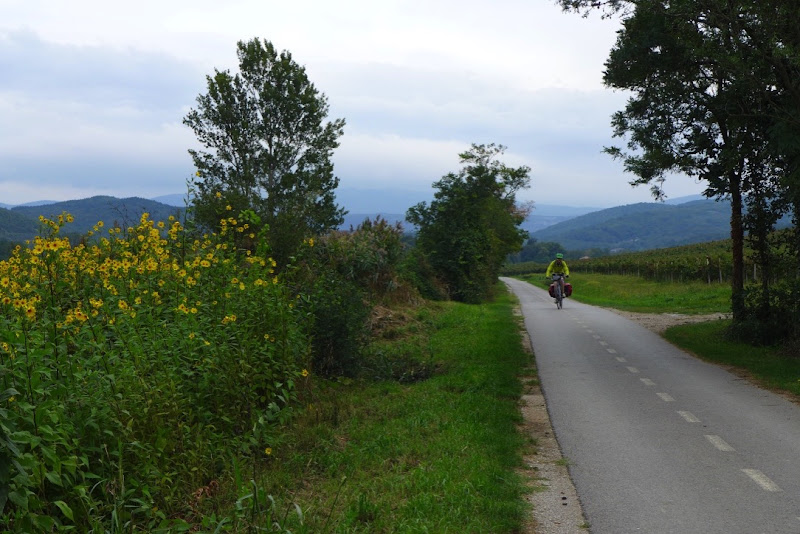 The magical bike path to Trieste
And like the proverbial yellow brick road in the Wizard of Oz, the bike path did bring us to Trieste. Magically, it wound through calm farmland and forest, bypassing both the city and the highway. It was almost too good to be true, and before we knew it we were on the Italian border, which was even more of a joke than the Slovenian border. 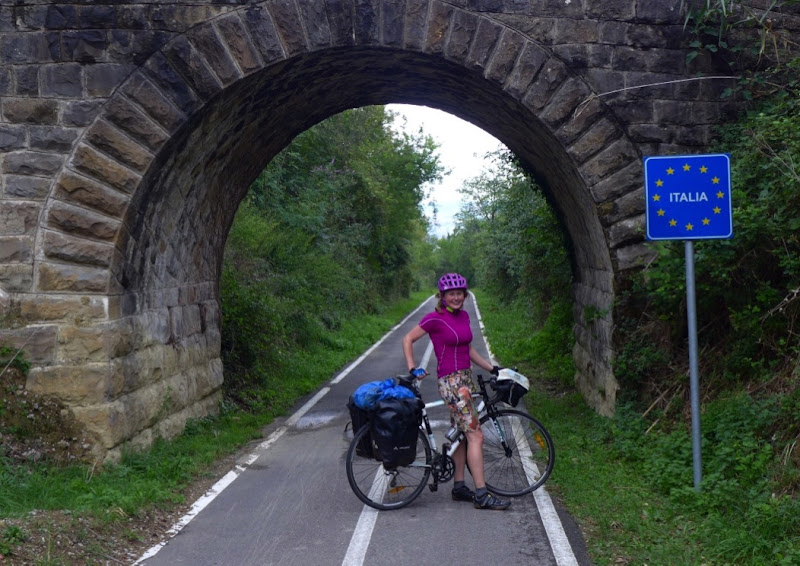 The Slovenian-Italian border, with absolutely no one watching.
After entering Italy, we spent a stressful hour pedalling through the outskirts of Trieste until we finally got to the city center and our accommodations for the night. My GPS told me we had racked up another 100 km day, and my legs confirmed that it had been another hard one.
That didn’t stop us from getting out to sightsee, though. Trieste was a great city to walk around in, with lots of cool buildings and statues ranging from all imaginable time periods from ancient Roman to modern. 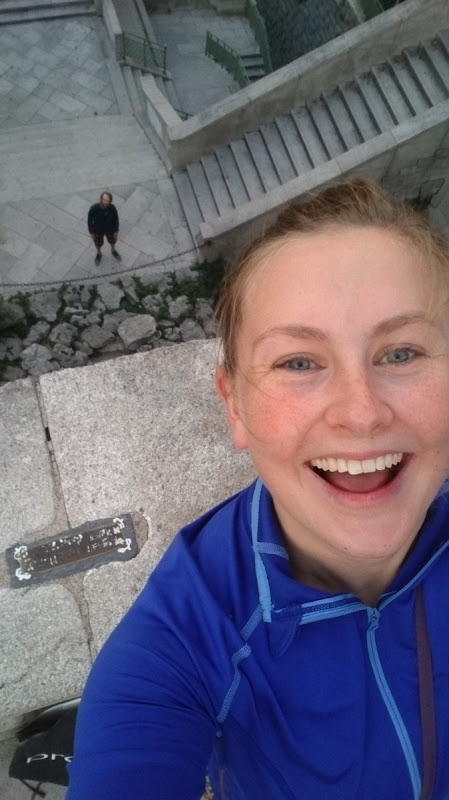 On a majestic flight of stairs built directly above a car tunnel in Trieste. Going for the ‘honey-I-shrunk-my-boyfriend’ selfie.
And of course, now that we were in Italy, we could enjoy Italian food. We managed to pick a quiet trattoria and had one of the best meals of the trip. 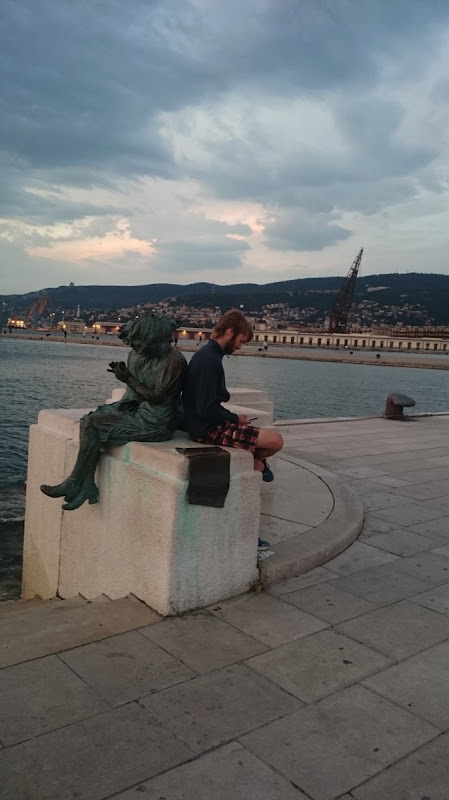 The waterfront the center of Trieste. Audun made friends with a statue.
Tomorrow? To Venice.
- The Wild Bazilchuk
Labels: adventure bike touring biking croatia road biking