This is a story with several parts. If you haven’t already, check out Part 1, Part 2, Part 3, Part 4 and Part 5
The final leg of our bike ride to Venice started, ironically, on a train. Wanting to have at least part of the day to sightsee in Venice, we opted to bypass most of the remaining kilometers and start riding from San Dona di Piave, about 40 km outside of Venice. 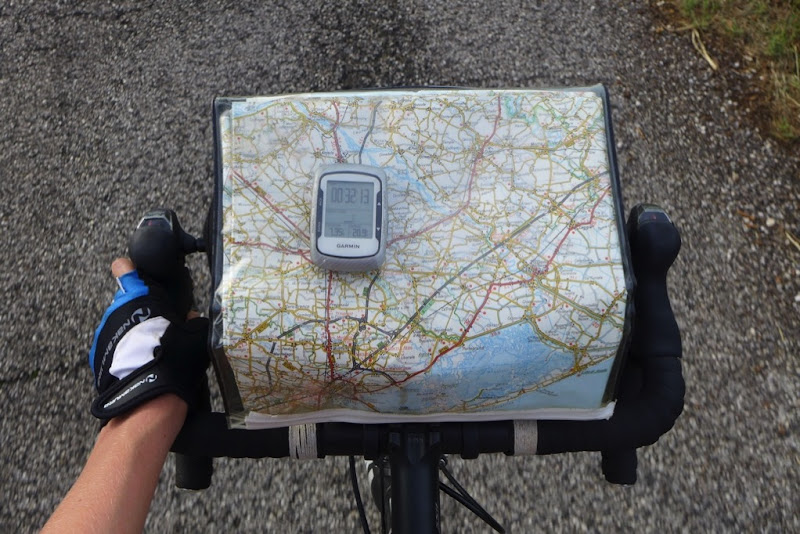 My navigation setup, heading to Venice
The last couple days had contained numerous climbs, but the road out to Jesolo and along the peninsula towards Venice was completely flat. It was so comfortable to be able to cruise along, nearly without pedalling, at 25 km/h. As was the case for most of the trip, we were travelling along the water. This water had a murkier sheen that the Adriatic coat, and the color sometimes seemed to meld with the cloudy sky. This was an area that was clearly touched by the passage of humans; the coastline was a cement wall and there were many boats in the water. 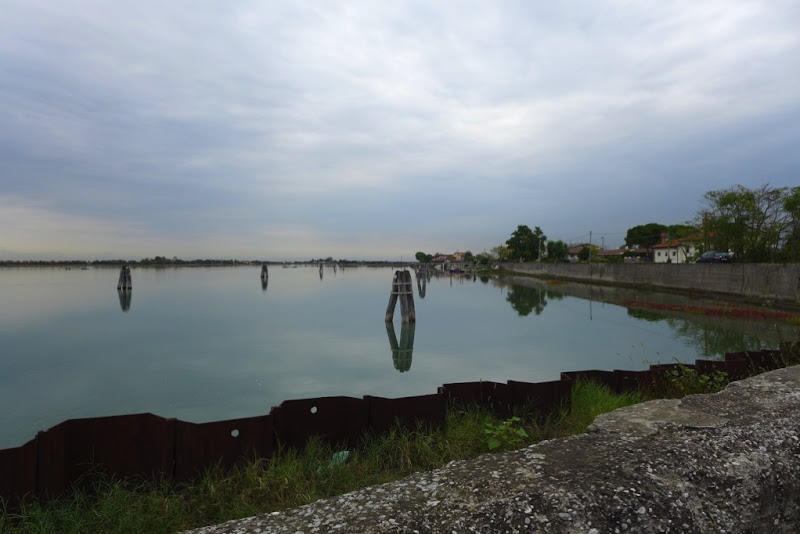 Incredible colors along the Jesolo lagune.
After a couple casual hours of riding we reached the end of the road, with only water between us and Venice. It would be a suitable end to our journey, I thought, to enter Venice by boat, triumphant with our bicycles. I headed over to the ticket both and asked for tickets for two people and two bikes. “No bikes,” the Italian woman at the ticket booth informed me, “You have to leave them here.”
Leave them here? But we had to get to the airport tomorrow! How could we have travelled all this way on our bikes and not be allowed to take them with us? If I had done a little more research before travelling to Venice, I would have realized that bikes are completely forbidden in the city. This is for good reasons; the streets are small and winding and there are numerous staircases.
It took a few minutes of questioning before the woman stopped repeating “No bikes!” and conceded that we could in fact take a ferry, with our bikes, to an area called Tronchetto. From there we might be able to find somewhere to leave our bikes and then walk into the city center. 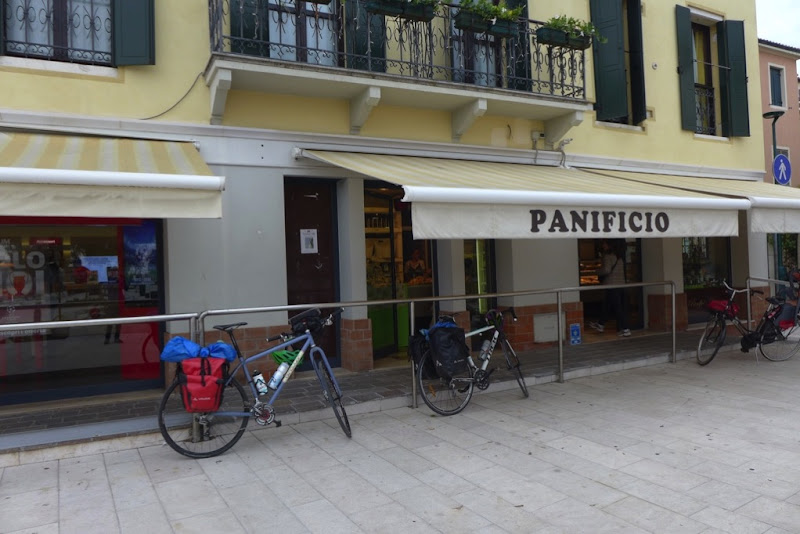 If you must wait for a ferry, cross your fingers there’s a panificio (bakery) you can stuff your face at in the mean time.
Thus began a two hour journey of getting ourselves and our bikes the last few kilometers from Punta Sabbioni to Venice. We refined our plan even more, realizing that since most of our luggage was camping gear would could just leave it with the bikes. And that’s how we took travelling light to new heights and repacked so that we would both enter Venice with no more than our 10-liter cycling packs.
The bright side of our long ferry journey all the way around Venice to get to Venice was that we got to go around Venice in a boat, giving us nice views of the city. 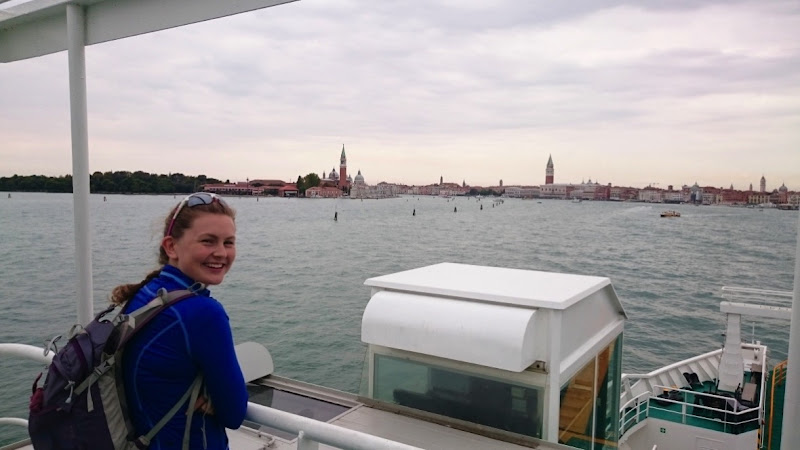 On the car ferry, with the Venice skyline in the background.
Finally at Trochetto, we located a parking garage where people from the mainland leave their cars before entering Venice. A familiar scene was replayed; I approached the ticket booth for parking and asked if we could leave our bikes somewhere in the parking garage. “No bikes,” the man in the ticket booth exclaimed, as though we were retarded. “You have car?” We shook our heads. “Then I can’t help you.” We withdrew to regroup, but I was beyond rethinking. How could everyone in Venice be so horrible to cyclists? Had no one else ever arrived here by biked? Audun tried to reason with me, saying that we could find somewhere outside to lock our bikes and then take a water taxi with our luggage, but I felt the reasoning pass straight over my head and tears well up in my eyes.
I was a snivelling wreck in an Italian parkering garage. But the crying helped more than any of our words had, and all of a sudden the man in from the ticket booth was ushering us to a back room where we could leave our bikes. I almost started laughing at the ridiculousness of the situation; ask a simple question and all you get is no, but start crying and they listen?
Soon we were waltzing down the streets of ancient Venice, free of baggage and bikes. I was hungry and started to look for somewhere to eat. Every snack bar seemed to display the menu in at least 4 different languages and give off a distinct vibe of tourism. I wanted something authentic, and Italian, and I didn’t even know what that would be.
That is, until we passed a tiny shop crammed with people, filled with the noise of Italians having a rowdy discussion with each other. Curious, I peaked in and watched as people procured sandwiches and tiny glasses of wine while speaking animatedly with three chefs, who were somehow able to gesticulate as they talked at the same time as they made sandwiches.
“I think we should stand in line here,” I announced to Audun, and he tended to agree. This shop seemed like The Real Italian Experience. 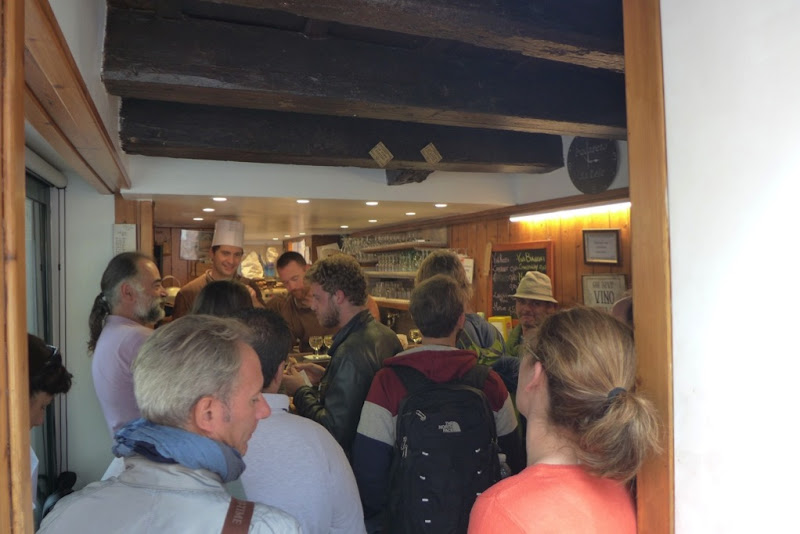 The Magic Venetian Sandwich Shop
After spending about 20 minutes being cut in line by Italians who were far less timid than us, we too had procured the magic sandwiches that everyone else was eating. They were great, and I finally felt like we had done something right that day. 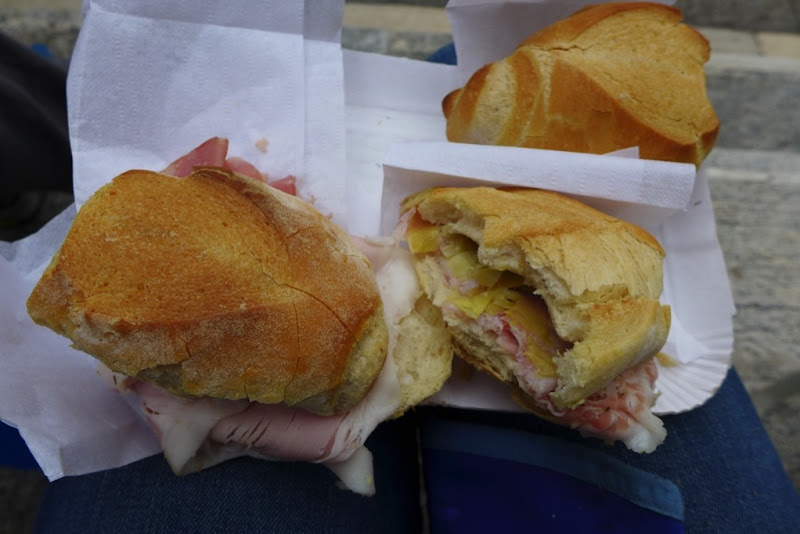 Magic sandwiches
After consuming our delicious sandwiches, we wandered towards the heart of the city and our AirBnB. Navigating in Venice is difficult at best; most of the streets are very narrow, they all twist and turn, and a fair number of them suddenly dead end at a canal. 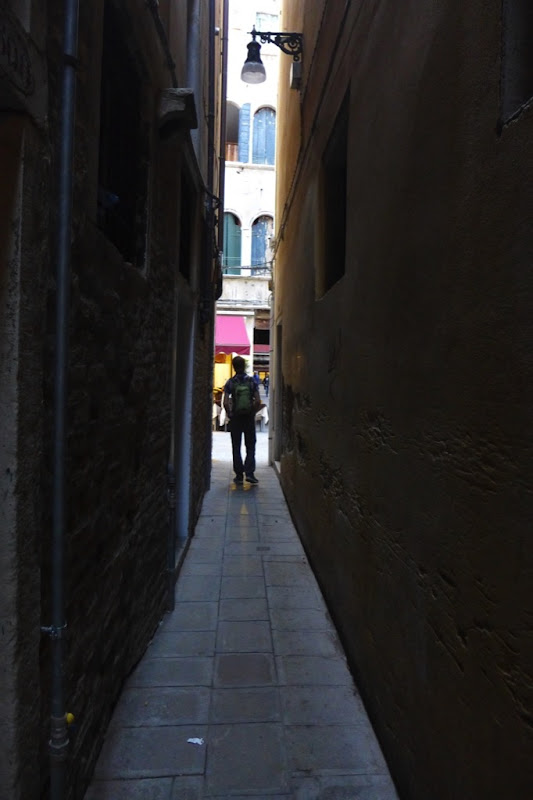 Audun in a typical Venetian alley
There were undeniably lots of tourists, especially on the larger streets and near attractions like the Ponte di Rialto. In these areas the cloying scene of masses of people armed with selfie sticks and DSLRs obliged me to put my camera away and simple watch. Although I like to take pictures, my motivation is to tell my unique story, and I find it frustrating when I encounter swaths of people all taking pictures of the same thing.
Amid the hubbub of tourism, the air of secrecy, power and decaying beauty were omnipresent in the streets of Venice. Sometimes we would round a turn and end up in a quiet alley which gave the convincing impression that we were alone, all alone in this labyrinth of a city.
After checking into our gorgeous AirBnB, we headed to the very center of tourism in Venice, namely the Piazzo di San Marco. It was every bit as crowded as I expected, but still impressively majestic. 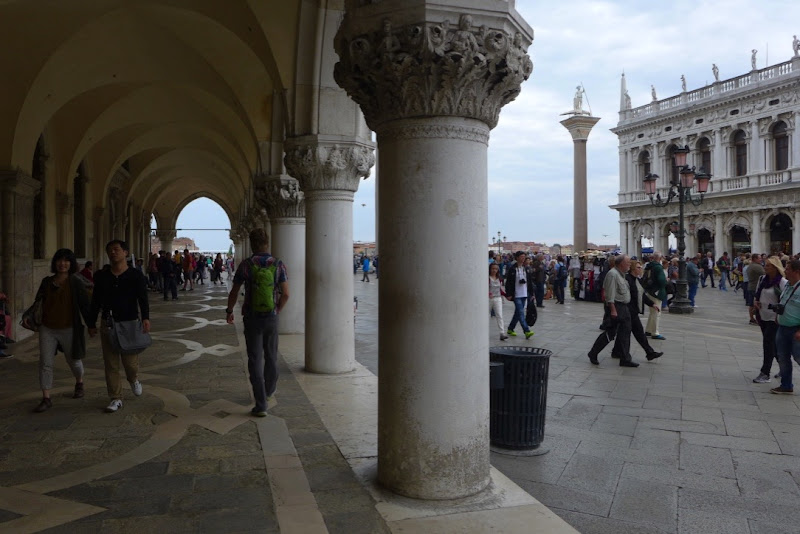 The crowds at Piazzo di San Marco
We only had time for one museum, and settled on the Doge’s Palace, which was once the very heart of political power in the Venetian Republic. It was impressive just how much money was put into making powerful places look fancy back then. Countless detailed paintings cover the walls and ceilings and I lost track of how many things were gilded and made out of expensive marble. There are also dungeons, although they aren’t very impressively displayed. 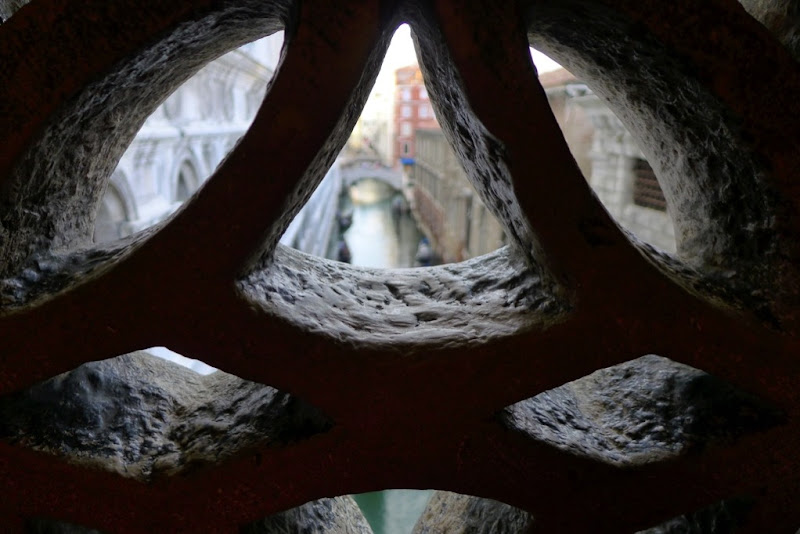 The view from the Bridge of Sighs, on the way to the dungeon in the Doge’s Palace.
The next morning we got up early for a run. Morning runs are my favorite way to experience big cities; there’s just something about the quiet lull of the morning and the empty streets. Venice did not disappoint. 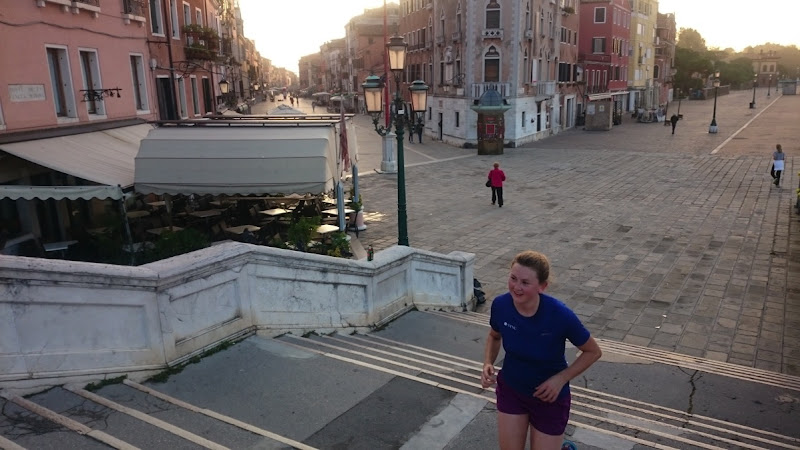 Just a casual morning run on the streets of Venice.
I even got to take advantage of all the empty space on the Piazzo di San Marco: 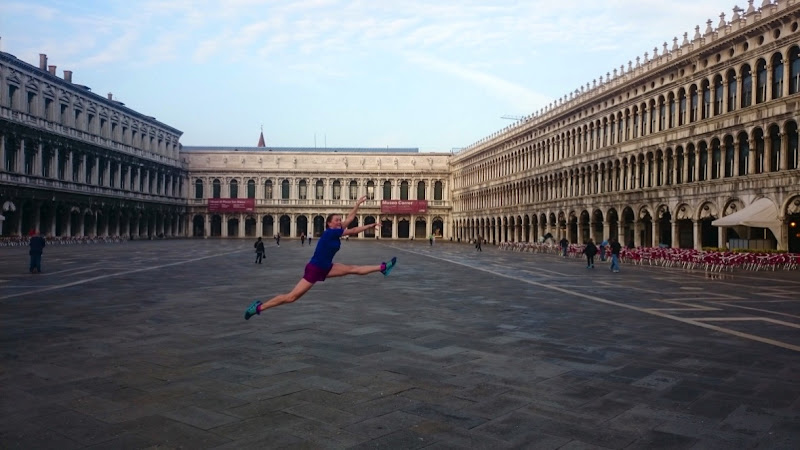 JUMP!
After a yummy breakfast, we headed out to walk back through the city to get our bikes. They were still in the parking garage where we had left them; success! We were hoping to take the bus to the airport, both because we didn’t want to ride the highway to get there and also so we wouldn’t have to fly all sweaty.
When we showed up at the airport bus ticket office, the ticket vendor gave us the at this point predictable "NO BIKES!". So we had to ride to the airport after all. 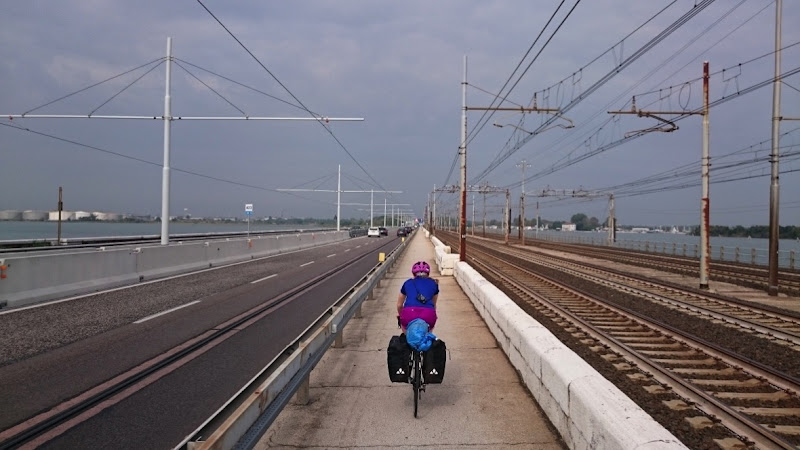 On the bridge out of Venice
But really, I wouldn’t have had it any other way.
- The Wild Bazilchuk
Labels: adventure bike touring biking croatia italy road biking