If you haven’t already, read parts one and two of this trip report!
The wind blew all night, sometimes practically flattening the walls of our tent. I woke up with a jolt many times to the sound of the tent poles straining against the wind, afraid that this time, the wind would actually break the tent. But the Palace of Spaciousness and Luxury survived the tent; wind test approved! 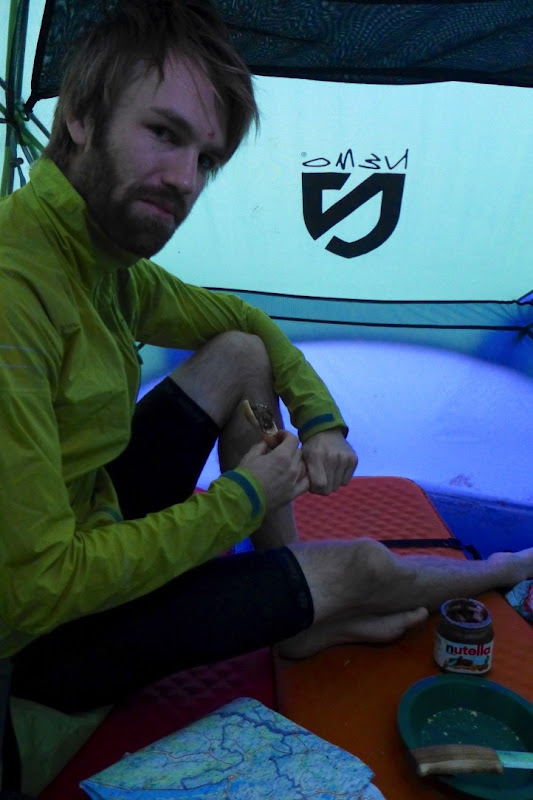 Nutelle: breakfast of champions in the tent
Today we had an alarm set, because we were touring cyclists on a mission. The mission was Take All the Ferries. After having crossed the Bridge of Windy Doom yesterday, we were now on an island, and short of turning around and going backwards, a ferry would be the way to get off. Furthermore, we had planned a complex route of island hopping for the rest of the day, involving 4 ferries in total. I have illustrated the route with a little help from Google: 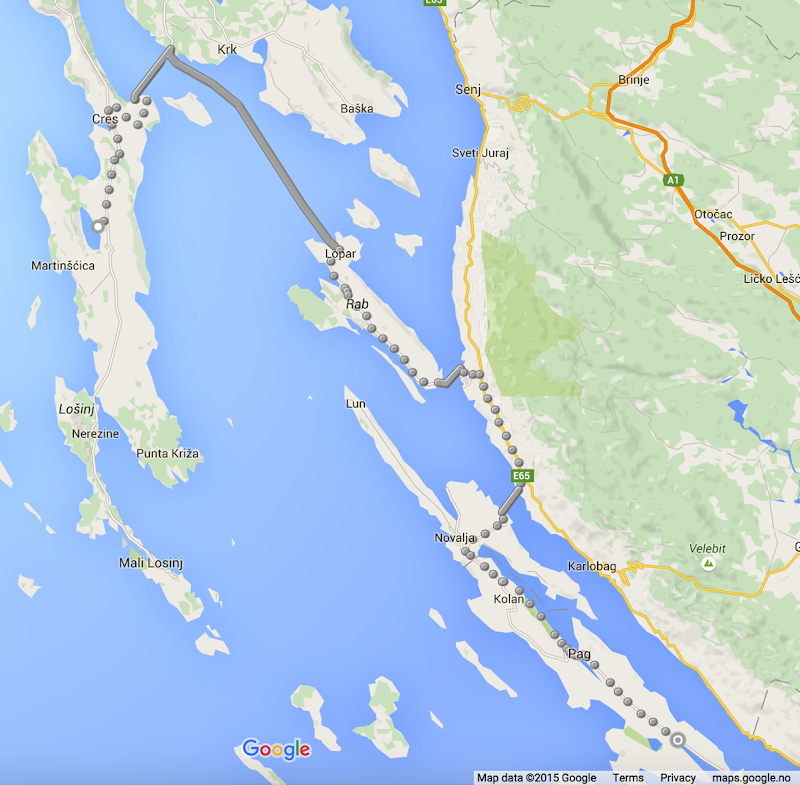 Dotted lines are riding, wholes lines are ferries.
The longest ferry, from Lopar on Rab to Krk, only ran four times a day, and the last passage would leave us cycling in the dark, so we were in a hurry to catch an earlier ferry. By 7:15 my bike looked like this: 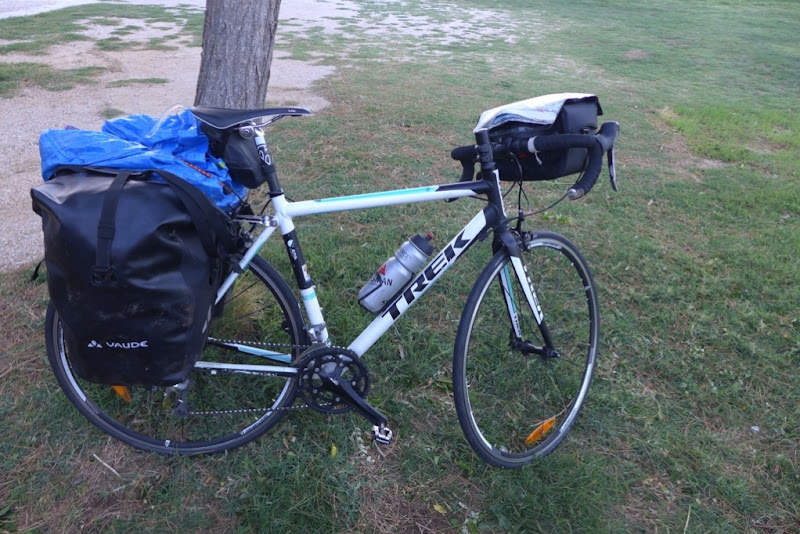 Sylvia, all hoboed up.
And I looked like this: 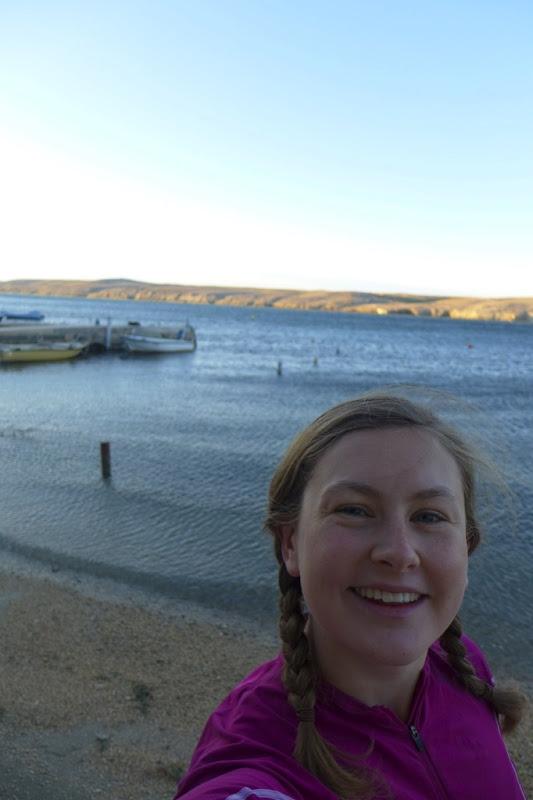 Ready to go!
We were ready to hit the road. As I started to pedal, I was filled with sudden euphoria. To be here, at this moment, and to be pedalling, moving forward! The road winded through tall grass and overlooked barren hillsides. For some reason, a number of low stone walls had been built in some of this hillsides, neatly partitioning the landscape. 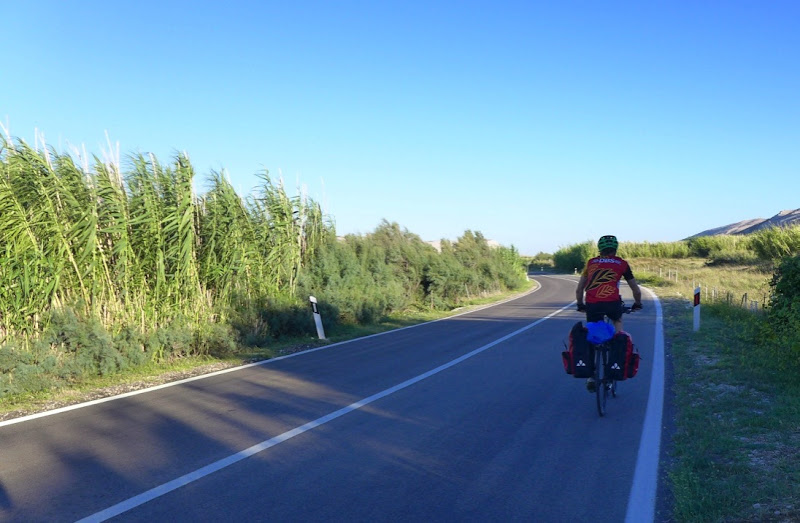 Tall grass on a beautiful morning.
After passing through the village of Pag, the road started to climb steeply. From what I could divine from the 1:500 000 driving map we were mostly navigating off of, we were crossing over to other side of the island. I hoped all this climbing wouldn’t cost us too much time - we had a ferry to catch, and missing it would have consequences for the rest of the day! We had given ourselves plenty of time though.
I like climbing. I like the steady work of moving uphill, and I like the view that comes with it. This one didn’t disappoint, and there was more sparkling blue seas and rocky hills. Cresting over the top and zooming down the other side opened up a whole new view and I realized how much closer I felt to the view on a bike rather than a car. Like I were moving into it unshielded rather than protected by my metal box. 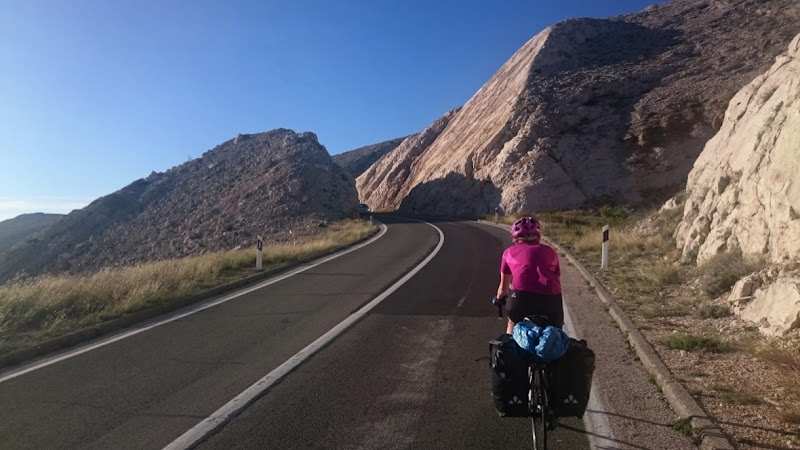 The road above Pag was practically dug into the hillside.
The road dropped us into another big climb, crossing the island yet again, and I got a flat tire. We quickly fixed it before grinding our way slowly upward. This section was proving harder than we thought! Descending from the second big climb lead us past a cheese factory (apparently that’s a big business on Pag!) and onto an open plane. The wind picked up, although it was less gusty than the previous day. I mashed the pedals, zooming across the plane at 30 km/h.
We turned away from the larger town of Novalja, heading instead for the unpronounceable ferry port of Zigljen. “You’re going so fast!” remarked Audun, “We have plenty of time though, you know that?”
Looking at yet another rolling set of hills ahead of us, I wasn’t so sure we had plenty of time. As we approached the first hill on this stretch, a car pulled over and rolled down the window. “There’s no ferry!” they exclaimed, “too much wind!” Audun and I looked at each other, and I felt my heart sink through my stomach. No ferry? How could it be? We needed to take that ferry!
“How long will the ferry not be running for?” I asked. They just shrugged and said they had wanted to tell us because we were on bikes and the next section was… wavy gestures were made with the hands.
After a short conference Audun and I decided to continue to the ferry port. Probably there would be someone there who could tell us how long the ferry was cancelled for. Backtracking all the way around to the mainland would be around 100 km, and although that would only take an hour in a car, it would take us all day and then some. The wind was supposed to die down during the course of the day, and surely there would be a café or something where we could sit and wait for the ferries to start running again.
Fat chance.
For the next 45 minutes, we battled brutalizing winds that seem to grow stronger with each successive hilltop. These were headwinds, the kind of wind that literally stopped me in my tracks. Many cars were driving down the road towards us, and several pulled over to give the same message: No ferry. Too much wind. No one could tell us when, if at all, the ferries would start running again. 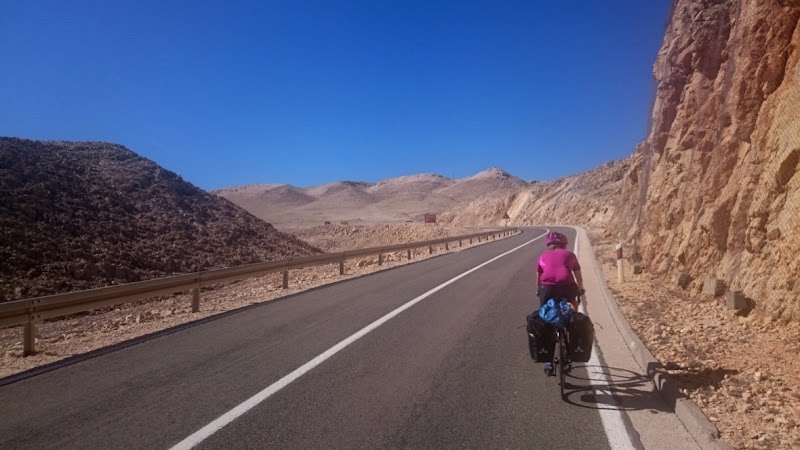 These lands had clearly felt wind before.
I was so demoralized I stopped in the road and starting sobbing. Stupid, stupid wind! I hated it! But I had decided to get to the ferry port, and get there I would - or bust. The landscape grew more and more barren as we drew closer to the ferry port, and to me it seemed hostile, wind-blasted and foreign.
There was a line of ferries at the ferry port, and absolutely no infrastructure other than a closed ticket both and ice cream stand. There was no one in the ticket both, no information apart from a small sign that said ‘No ferry.’ Well duh. 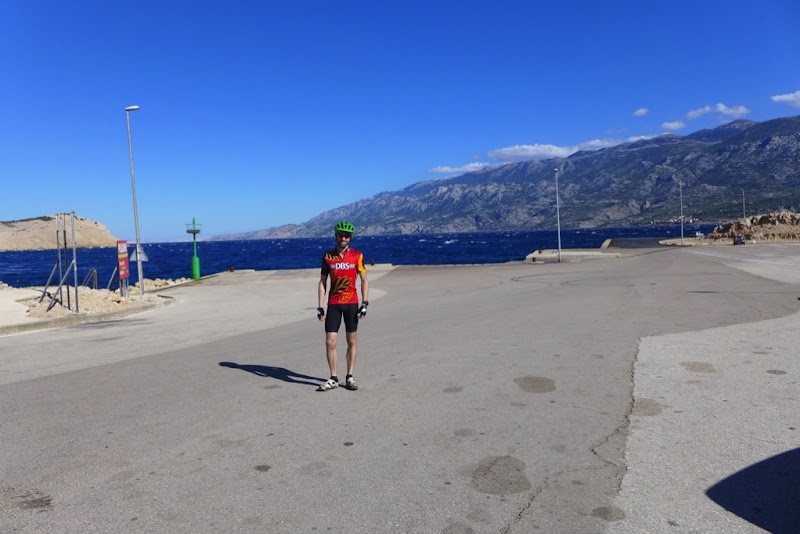 Audun at the desrted ferry port in Zigljen. Note the white caps in the background.
We ate second breakfast cowering behind the ticket booth to get some shelter from the blasting wind. Screw this, I thought. I wasn’t going to sit at this god forsaken place with no information about when the ferries would start running. And I wasn’t going to ride an 100 km detour either. I was going back to the town of Novalja, and I was going to eat a lot, read my book and thoroughly enjoy myself.
So that is how we ended up taking half a rest day at swanky campground filled with Germans in Novalja. Oddly enough, the winds were only strong on the ferry port, Eastern facing side of the island. At the campground, life was much more tranquil. 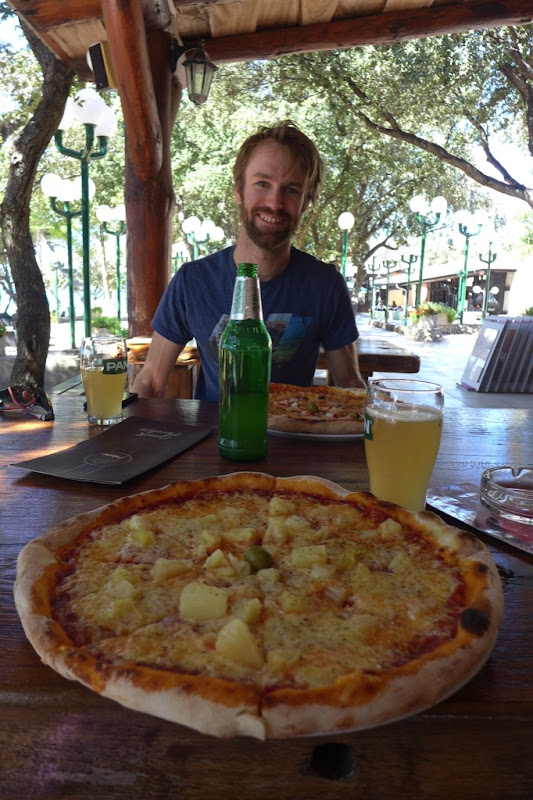 My pizza. My precious. ALL FOR ME!
We ate enormous pizzas and drank radler in the middle day. Then we fully enjoyed the private campground beach for the rest of the day, and I read most of ‘The Martian’ by Andy Weir. 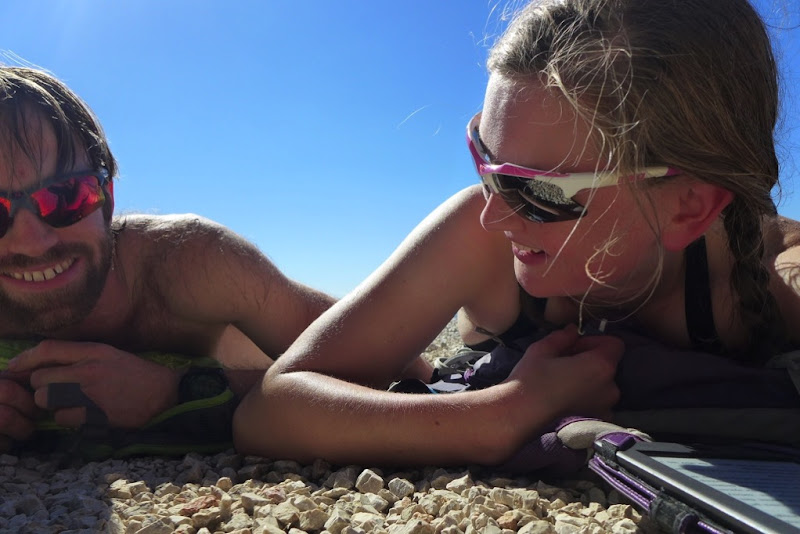 Lying on the beach. Yep, that’s the only time that is going to happen this decade!
The next morning we were up early (again) to try to catch a series of ferries (again). The wind had died down completely though, and the barren landscape we cycled across to the ferry port seemed more charmingly rugged than hostile. The ferry was running! 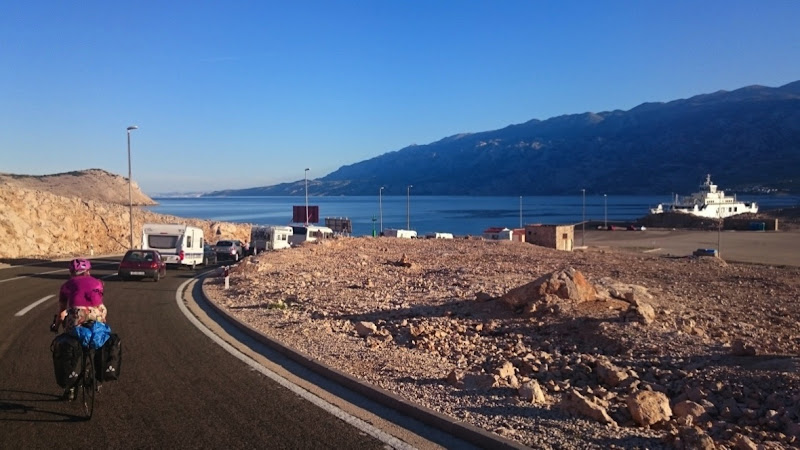 A ferry! And calm seas!
We then covered 20 rolling kms on the mainland to the next ferry port at Stinica, passing beneath Paklenica national park. There were almost no cars, and the views up to the mountains and down to the sea were beautiful. 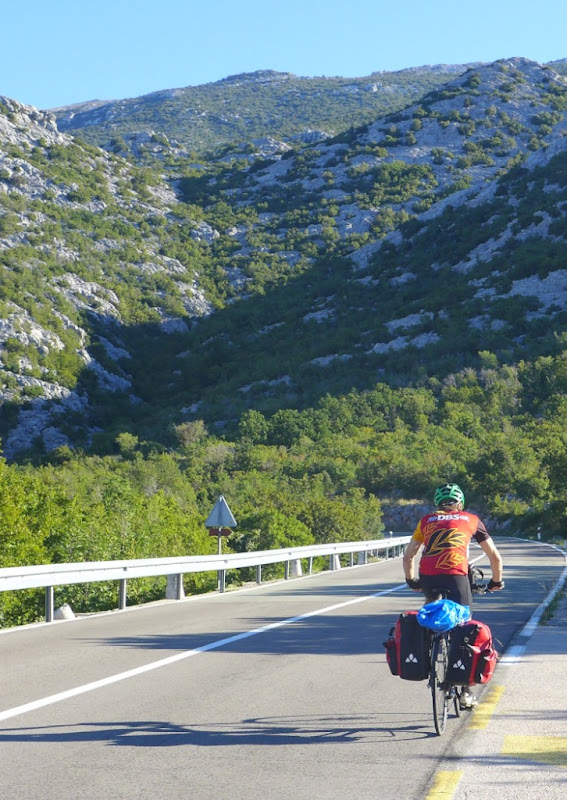 Audun in the foothills of Paklenica national park
The ferry from Stinica took us off the mainland again and onto the island of Rab. On the way into Rab city (all the islands had a town with the same name as them, which is slightly confusing!) to pick up refreshments, we met a talkative young German who was out bike touring on his own. He was riding a bike big, slow tires and seemed to be happy to find someone to chat with.
In Rab, we enjoyed an early, dockside lunch. We had plenty of time before the next, longest ferry ride. I decided to get french fries, and received a container of fries that had been salted so much they were absolutely unpalatable, making me gag. The man who made them had barely understood enough English to take my order though, so I didn’t feel like wasting time trying to compalin. I just threw them out and we left. This was very disappointing, and I haven’t craved french fries since I tasted the ones in Rab.
We still had an hour to kill before the ferry left from Lopar on Rab. Luckily there was a stretch of beautiful coastline to sit and enjoy while we waited. 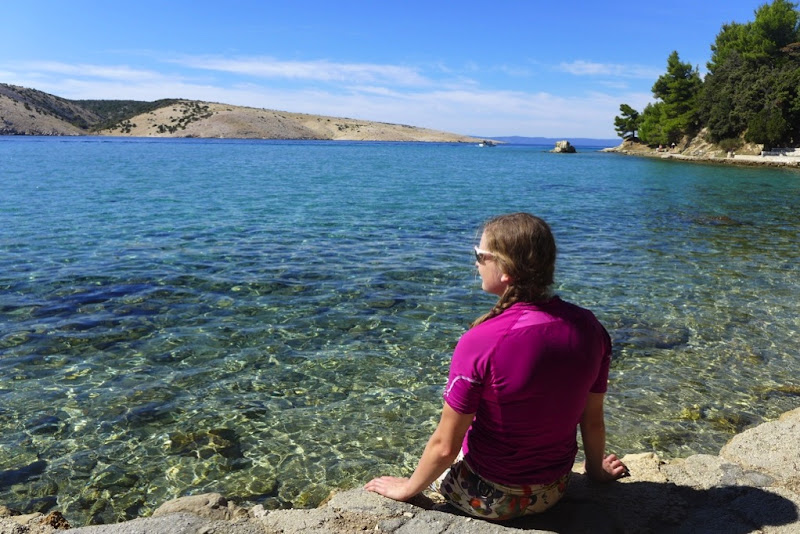 Nice Croation coastline and clear waters
My biggest regret of the trip is not taking a swim at Lopar. At the time I thought it was too much of a hassle to dig up my swimsuit, get changed, and then carry around the wet clothes, but just look at that water!
It was over an hour’s ferry ride to our next stop in Krk. The young German found us again and we chatted with him for most of the way. He was a medicine student, and headed in roughly the same direction as us. From Krk, though, we would take slightly different routes. I never got his name, but snapped a picture of him before we disembarked the ferry. 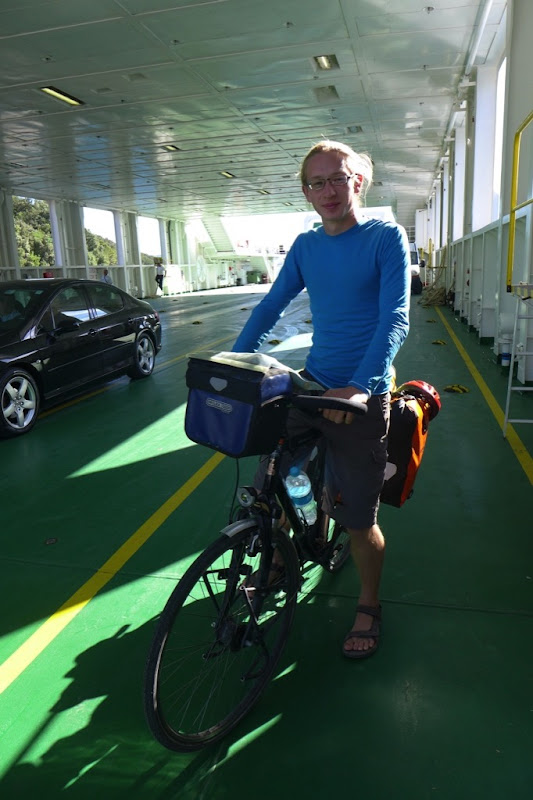 Our German friend. I wonder how his trip worked out?
We wouldn’t ride at all on Krk; we just had to wait for the next ferry to the island of Cres. For some reason, the ferries didn’t correspond at all, so we were stuck waiting for nearly an hour and a half. Although the coastline was less charming in Krk, there was a small café where they served enormous pieces of cake: 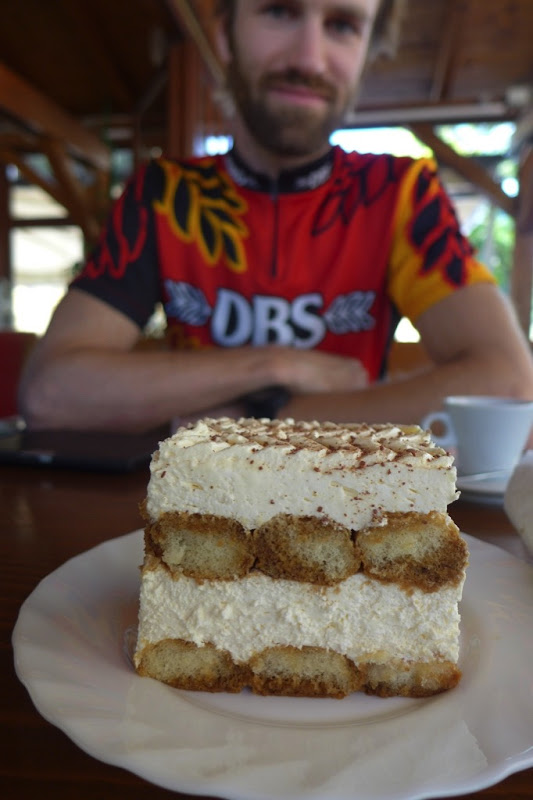 Tiramisu
By the time we stepped off our fourth and final ferry for the day, I was raring to go, feeling jittery from all the coffee, cake and waiting. After all, we had spent more time waiting for and taking ferries that day than actually cycling! The last 12 km into the town of Cres provided some good climbs that wore off any jitteriness in my legs. 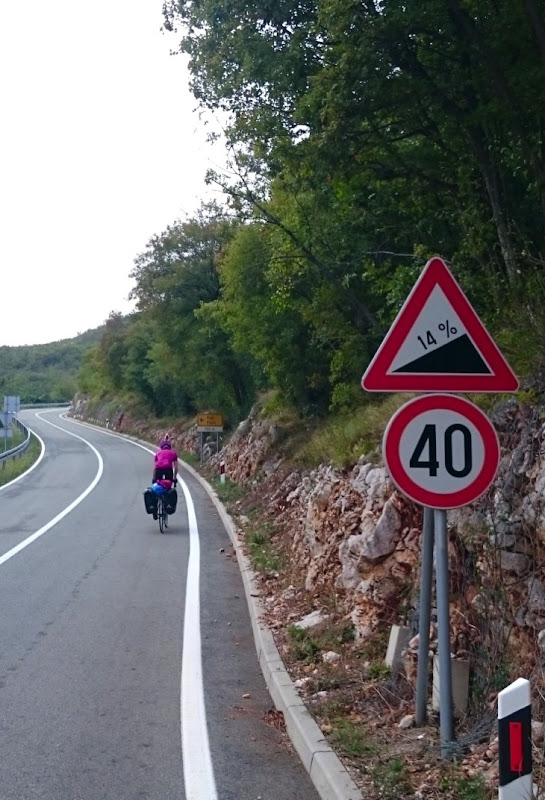 14% is pretty painfully steep actually.
On the way up, we started discussing something the German had said. He had a better map than us, one with actually topography. Examining it, I had pointed out the symbol for the campground in Cres where we were hoping to spend the night.
“That’s the symbol for a nudist campground!” he exclaimed. What would we do if the only campground in Cres was nudist? Would they force us to go naked? Would we be allowed to stay there?
“They must put on clothes in the evening,” reasoned Audun. “I can walk around naked for an hour till the sun goes down, if need be.” I wasn’t so sure I could.
Luckily this turned out to be a non-issue. While the campground had a nudist area, most of it was fully clothed. We set up our tent and enjoyed a meal in Cres. We were exactly where we had planned to be 24 hours ago, one day behind schedule. Could we make it up? Would we make it to Venice by Friday?
- The Wild Bazilchuk
Labels: adventure bike touring biking croatia italy sun