This is a story with several parts. If you haven’t already, check out Part 1, Part 2 and Part 3
The sun rose dusky pink on a baby blue sea while we munched on our morning Nutella, cheese and brown bread. Even though we had a ferry to catch (the last of the trip), we enjoyed a meditative breakfast. I was tired of basing my every move off the next scheduled ferry time. 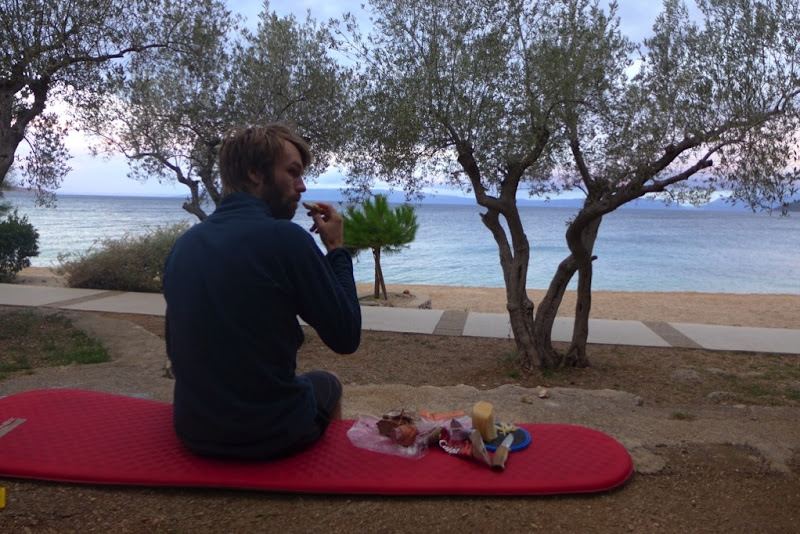 Early breakfast at the campsite
We had to check the ferry times as we checked out of the campground, though. The next ferry was at 9 o’clock, and they only ran every hour and a half. It was 7:15, and the distance between us and the ferry was nominally 22 km. I say nominally because the distances noted on our big planning map had typically turned to be slightly longer in the real world. Twenty-two kilometers in an hour and forty-five minutes may seem trivial to most road bikers (in fact, I can here them scoffing as I write this). But I vaguely recalled perusing our German friend’s topo map the day before and seeing some kind of hill. With heavily loaded bikes and an unknown amount of vertical between us and the ferry, we definitely didn’t have time to dilly-dally.
So I pedalled out to the campsite with my mind united in a single purpose: I would give everything I had to try and make that ferry. I would time trial this thing. As our path joined the main road, I spotted at sign: Porozina, 26 km. So my map distance was 4 kilometers off. Great. Maybe not a big deal for a car, but those extra four kilometers might be the difference between making and missing the ferry.
The road started to climb, and it didn’t stop. The grade was bearable, and I found that perfect point where my muscles were working hard, but not so hard that the lactic acid built up intolerably. I was going at a pace I could hold for an hour or two, but definitely not all day.
The clouds darkened to steely grey as we climbed, and I felt a twinge of nervousness. What if there was thunder and lightning? What if the ferry wasn’t even running? Despite the stress of trying to catch the ferry and the impending bad weather, I found myself thoroughly enjoying the climb. The road wound up steep, vegetated slopes dropping down to the ocean, now hundreds of meters below. I was strongly reminded of Skull Island from King Kong. Maybe there would be a giant gorilla at the top of the climb? 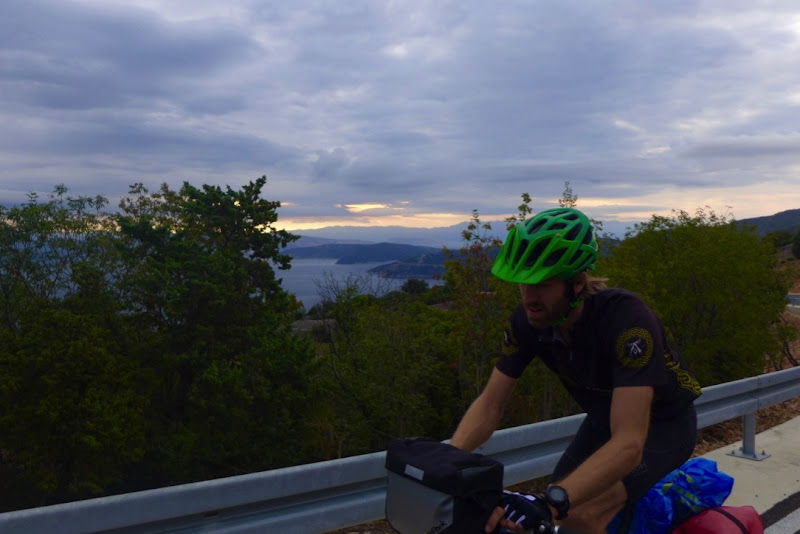 Dramatic light headed uphill on Cres. This is the best I could do shooting one-handed on a bicycle while pedalling up an 8% grade!
There was no gorilla, but climb topped out after numerous false summits. We had climbed from sea level to 500 meters, and our average pace was well below what it needed to be to catch the ferry. Luckily for us, ferries generally stop at sea level. There would be a fast downhill, somewhere along the road.
But first the road crested across the top of the island for a ways. Such was the urgency with which I rode that I didn’t stop to take a picture of the enormous bird of prey hanging in the air less than 100 meters above our heads. I had the sudden, swooping feeling that often overtakes me in the mountains, where I realize that this is a special time in a special place, and I have it all to myself.  I later learned that the island of Cres is famous for its griffon vultures - and I honestly think that’s what we saw. 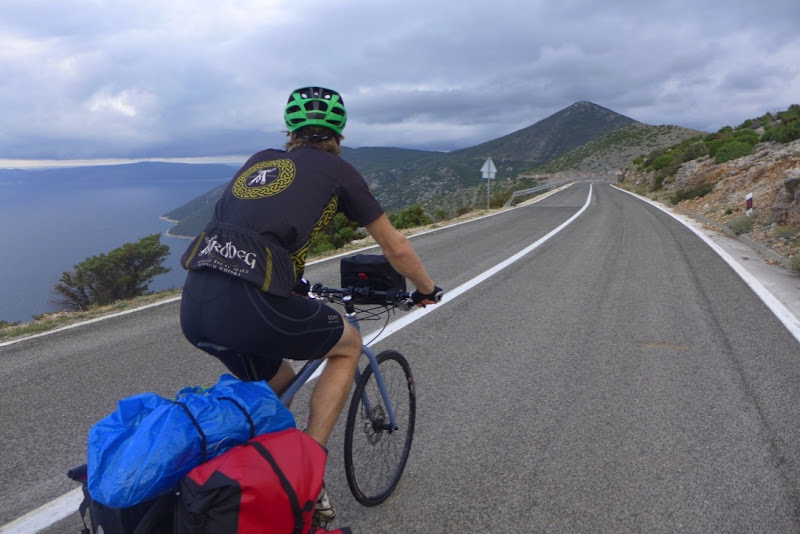 A view from the top.
Passing under the vulture seemed to be the turning point, and soon the road transitioned to a swooping downhill. The road was slightly wet, and I feathered my brakes cautiously on the way down. Even with cautious riding, we made up all the lost time climbing and rolled into the ferry port a full 15 minutes before departure, elated with our own performance. It began to rain just as we borded the ferry, and rained for the duration of the short crossing before letting up. 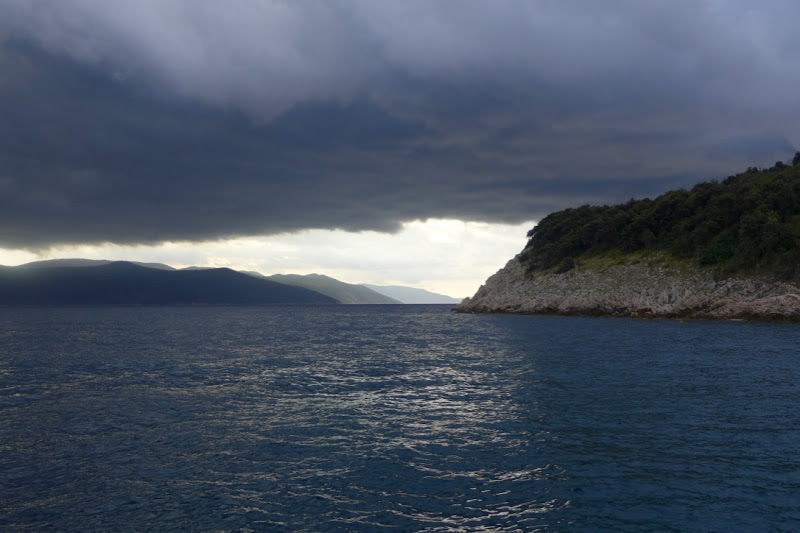 More dramatic light, looking back at Cres after from the ferry port on the mainland.
Now on the mainland, we aimed to spend the rest of the day pedalling across the Istria peninsula. I had imagined it would be easy after the strenuous riding of the morning, but the road through Istria started with another monster climb, this one graded at up to 15%. With the heavy load on my bike and my heavy gears, 15% grade translates to standing up and mashing the pedals while I almost hear the rush of lactic acid into my thighs. I somehow made it up several of these without walking, which I consider a triumph.
Then there was a leisurely downhill before we started to climb again, this time through the Region of Towered Towns (as I’ve decided to call it). This climb had a more pleasant grade, around 5% most of the time, but lasted forever. And around every corner of the road was a cutesy, Medival-looking city with almost identical towers. We almost stopped to check out Pican, but were deterred by the steep uphill to get there. 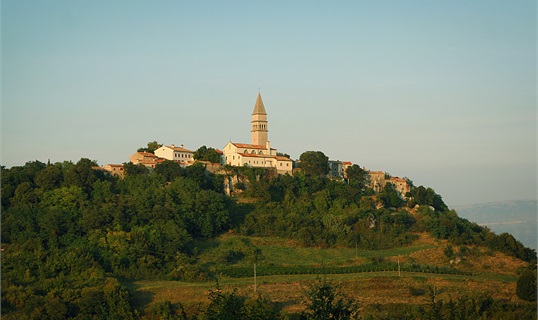 The city of Pican with its tower.
I had my heart set on a leisurely lunch break in Pazin, but climbing was heartbreaking slow. Pizza, repeated to myself, Pizza. Pizza. And before I knew it, we were zooming through the charming streets of old Pazin, finding a pizza shop, and ordering two enormous pizzas and soda. 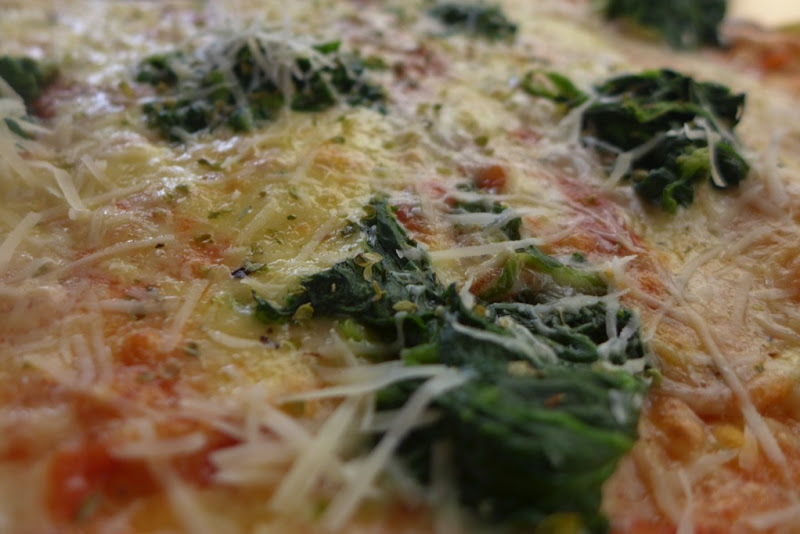 PIZZA!
I was tired as we left Pazin, my stomach full and legs leaden. I hoped there wouldn’t be more climbing - we had already done over 1500 vertical meters for the day in just over 60 kilometers. We were planning to do about 40 more, out a town on the coast called Vrsar.
This is typically the moment in the blog post where I go ‘FAT CHANCE!’ and it turns out there was another 1000 vertical meters of climbing. But the road gods were smiling on us that day, and the remaining 40-odd kilometers were almost all flat or slightly downhill. We rolled to out to the coast in under 2 hours and were settled into another enormous campground filled with German tourists in campers before we knew it. 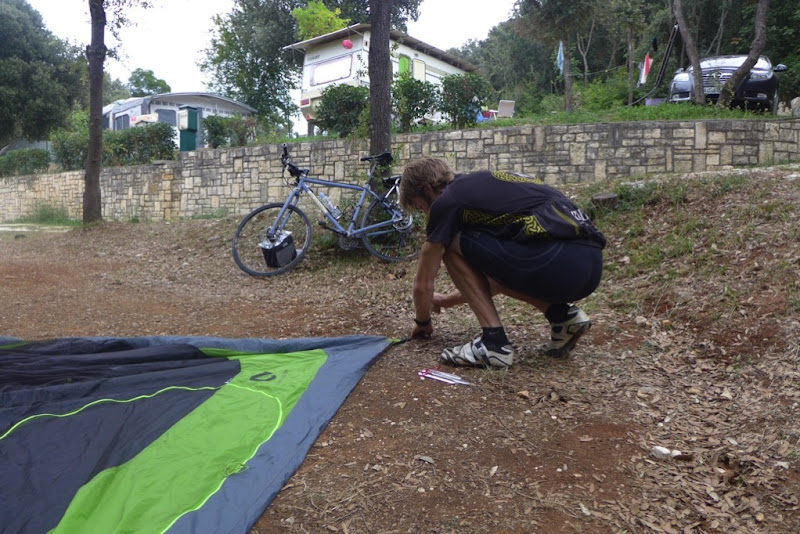 Setting up the Palace of Spaciousness and Luxury in Vrsar
I was tired, and happy that we were able to stop early in the afternoon after such a hard effort. I insisted upon sitting in the tent and finishing my book, The Martian, before we went out to eat. As we strolled into town to get dinner, the skies opened and it proceeded to pour rain for the rest of the evening. I had hoped we would have time to explore Vrsar, but the rain was so hard we could barely see the streets as we crossed them, so we went straight back to the campsite after another seafood dinner. As I listened to the pitter-patter on our tent fly, all I could think was, at least I’m not out riding in it.
This would be our last night in Croatia - tomorrow, to Italy!
- The Wild Bazilchuk
Labels: adventure bike touring biking croatia road biking