The weeks before going to the Lyngen Alps in Northern Norway, I was travelling so much for work I didn’t have time to really think about the trip or look forward to it. Before I knew it, it was May 1 and Audun and I were on the plane to Tromsø. It was bright and sunny as we stepped off the plane. Although the ground was bare at the fjord, the white-capped hilltops in the distance foreshadowed a promising continuation of the ski season.

Arriving in Tromsø on a Sunday meant the entire world was moving with great laziness. First we spent an hour waiting for the car rental place to open (it didn’t open until 1 PM, which seems pretty ridiculous to me considering how many tens of people were waiting for cars), then another hour looking for what must have been the only open grocery store in Tromsø. By the time we had driven to Lyngen, including a half an hour wait for a ferry, it was late afternoon. Not that the sky seemed to notice. May 1 is three weeks until the midnight sun starts up there, and that means it’s basically light all the time.

We found a gorgeous tent site near the edge of Jægervatnet lake, complete with picnic tables and a fire pit. It was rather close some houses, and kept wondering if it was someones private spot. In Norway, you are legally allowed to camp almost anywhere, but we were close enough to some houses that someone probably could have kicked out if they wanted to. We soon realized that this was a spot set up to attracted fishermen, so that the local landowner could make money selling fishing permits. With no fishermen in sight, we put up the Palace of Spaciousness and Luxury and started to plot an afternoon run. 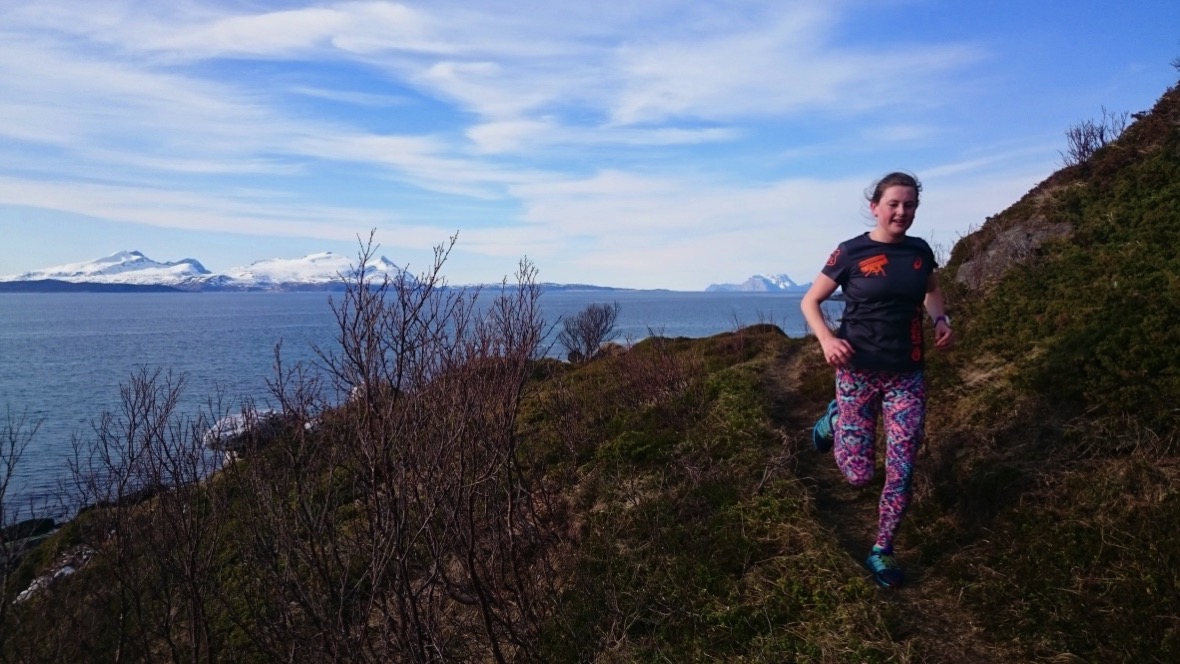 “We could go around this peninsula!” I exclaimed, tracing my finger around a leaf-shaped protrudence to the north of us. There was a trail marked on it, which turned out to be the faint, narrow kind of trail you only find in areas that don’t see heavy use. It weaved along the coast line, surging up and down along and above the beach. The air smelled of heather and sea salt, and I felt my mind grow quiet with the singular focus on where to place my feet next. In the distance were more mountains rising directly from the sea, but beyond that, the open ocean. 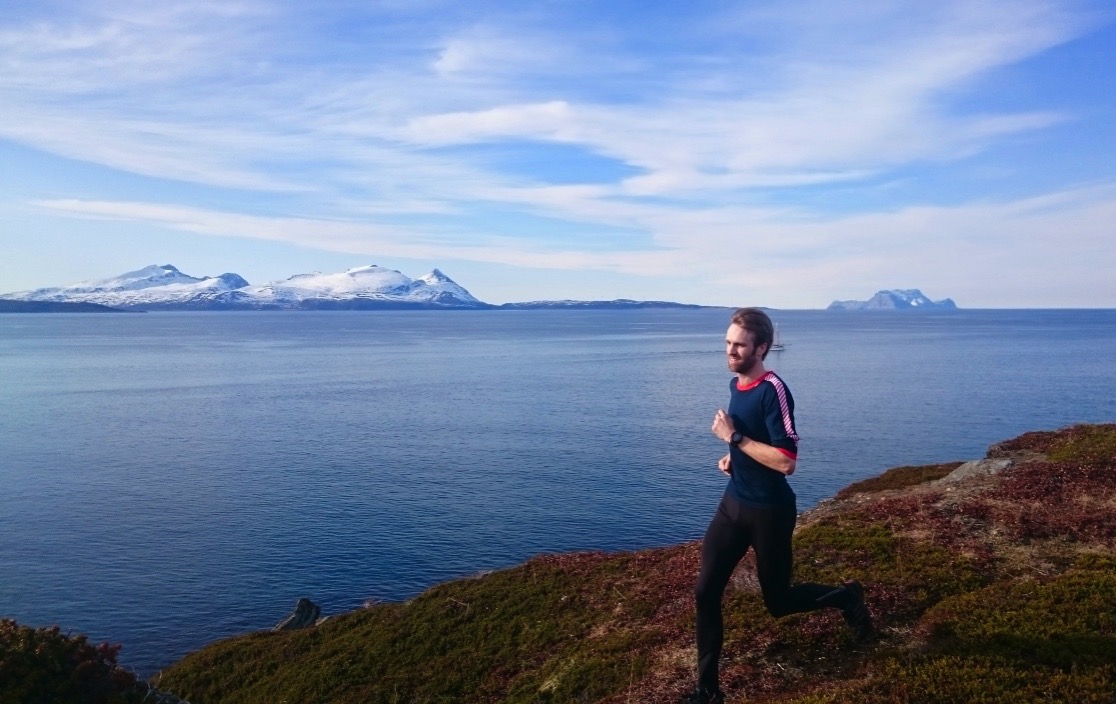 Audun and the islands that proceed the open ocean.

A sailboat trailed along the peninsula with us as we ran. It was moving very slowly, making basically the same progress as we did, although it was tracing a larger circle. Occasional wet patches soaked our feet, but life was sunny and we had dry socks in the car. The last bit to the car was 4K along a road, which was incredible straight. The farthest point along the road we could see never seemed to draw any closer, and I ran faster and faster in an attempt to catch up with it. Then Audun pointed out that we had 7 days of ski touring ahead of us, and maybe this wasn’t the moment to run quite that fast. Point taken.

We spent a tranquil evening in the sun, admiring the surrounding peaks and planning the next day. We settled on Fastdalstinden, mostly because it looked relatively uncomplicated, and we wanted an easy start so we could evaluate the conditions. 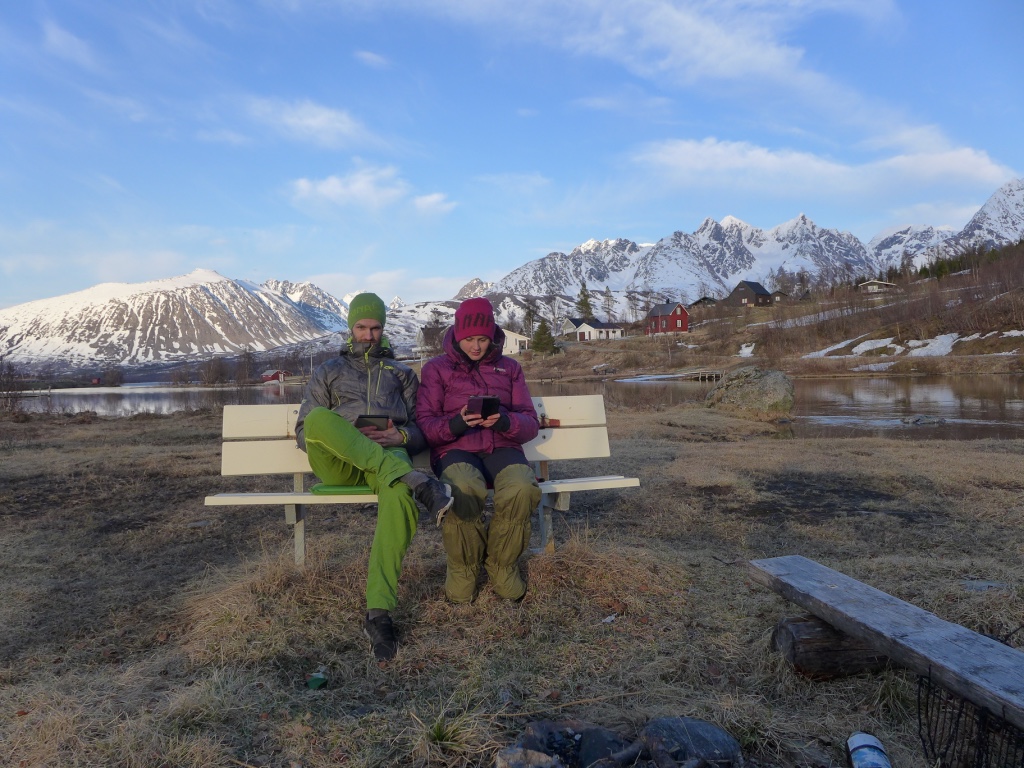 Self-potrait of the couple reading Kindles at their campsite.

The seagulls kept waking me up, and it was light every time I opened my eyes. I had no notion of time until my alarm went off, which meant it was time to get skiing.

The drive to the trailhead of Fastdalstinden brought us up a rutted, muddy road. “Abuse of rental vehicle, part 1000,” I joked, remember some of the previous ordeals we’d put rental cars through. We managed to get to the parking area without wrecking anything, and soon we were plodding up a tractor road that was just barely covered with snow. The jeep road was relentlessly steep and bare in places, forcing us to take off our skis. Soon we arrived at the power station that was the terminus of the tractor road, and the mountains opened up before us. 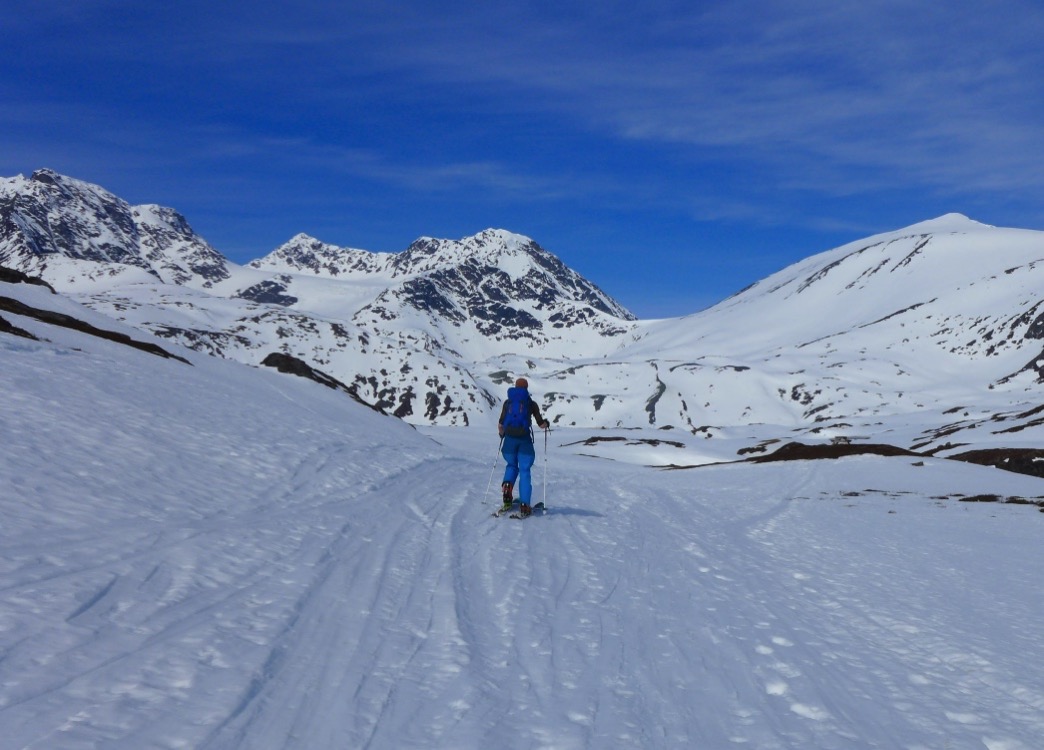 Audun takes in the view, Fastdalstinden on the right and Store Kjostind on the far right.

Following old ski tracks, we skinned to the top, stopping more than was strictly necessary to take in view of the glacier on the neighbouring mountain. At first, I saw what I thought was an impassable ice fall, but as we climbed higher on Fastdalstinden and saw the glacier from above, we could clearly see ski tracks on the upper part. So there must be a way!

There was only a slight breeze on the summit, and we took a long break to take in the beautiful day. 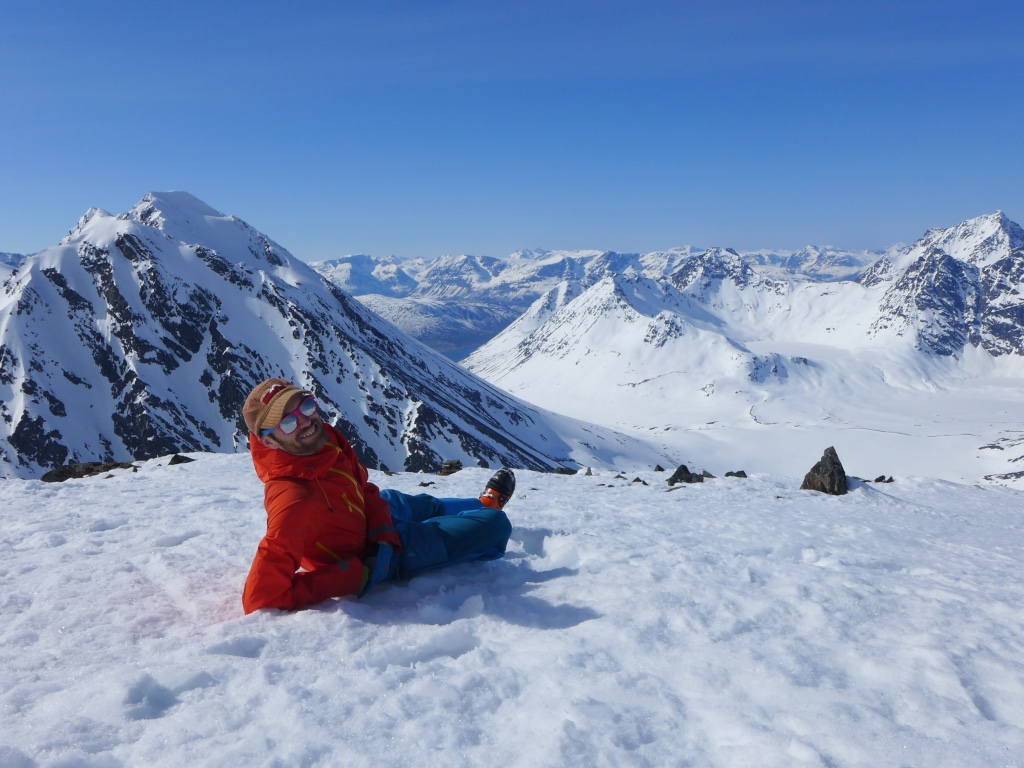 Audun chilling out on the summit of Fastdalstinden.

The ski down was decent. The main face of Fastdalstinden is south facing, so the snow had been cooked by the sun, but on the upper slopes there was enough resistance in the snow to make for some good turns. 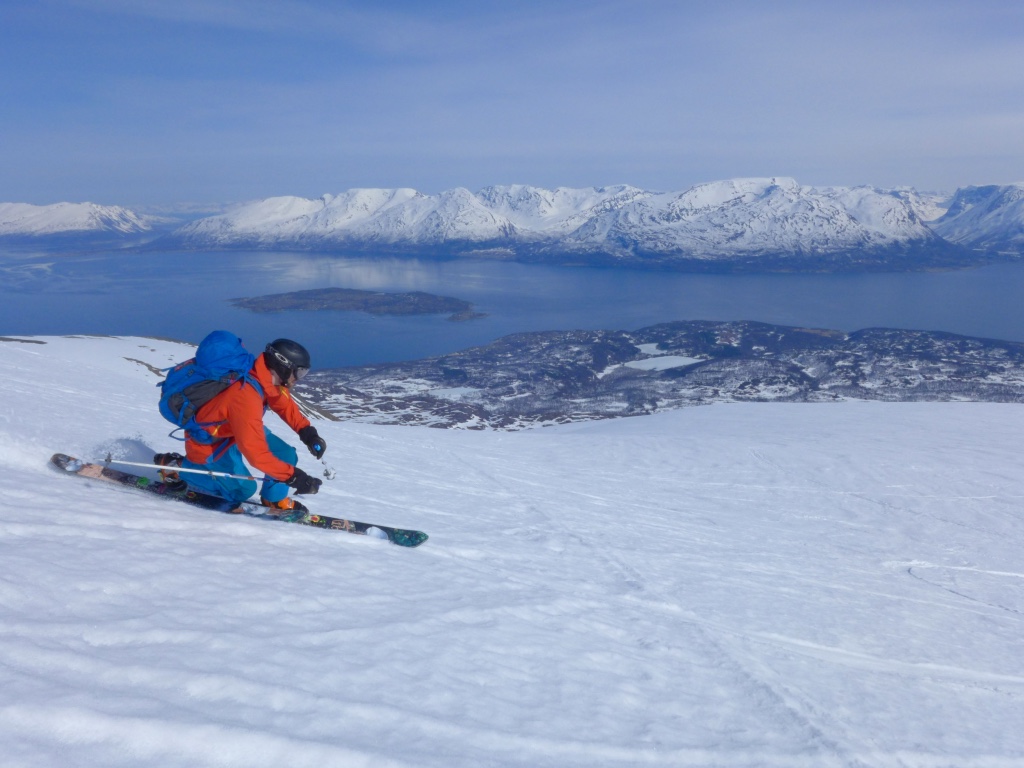 The lower down we got, the musher the snow became, until you didn’t have to do turns anymore and had to pole to make progress in the slush. 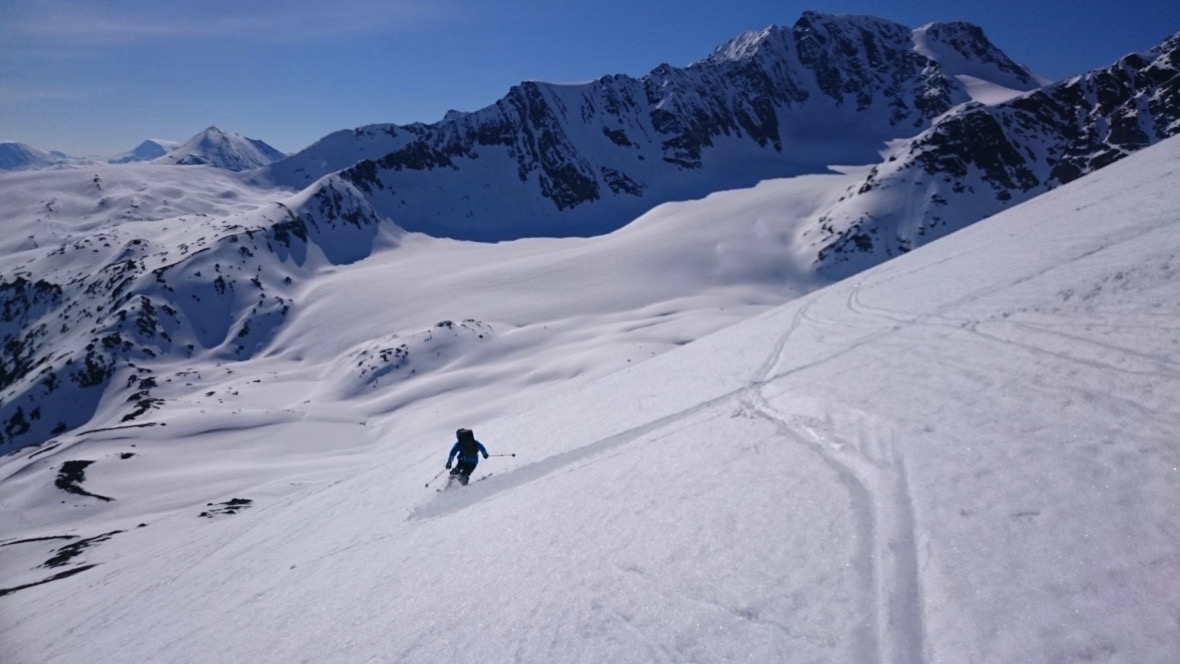 Intrigued by the ski tracks we had seen up the glacier, we studied our maps that evening and concluded that they could lead to a backside route up Store Kjostind. The main route up Store Kjostind, which is south facing and goes straight up from the fjord, had melted out to an altitude of several hundred meters and would therefore involve a tiresome climb on foot. So we decided to try this alternate, glacial route the next day and see where it would lead us.

Repeating the start of the previous day, we were surprised to see at least 20 people heading up the steep tractor road. The previous day we had only met two small groups, but apparently the word that the conditions were good on Fastdalstinden had gotten out. Soon, we veered off the beaten path from the previous day and headed towards the glacier. I still hadn’t seen a way around the bottleneck of crevasses in the middle of the glacier, but assumed it must be on the slope hidden from our view.

The route up the glacier turned out to be fairly simple, but we couldn't decide how to attempt the summit. Either we could climb a steep, exposed snow ramp that was clearly visible from the glacier, or traverse around the backside of a mountain to pick up the main route to the summit. The upper slopes of the visible snow ramp were directly over a cliff; it was definitely a no fall zone. Eying the cliff nervously, I suggested it might be better to attack the summit from the backside. 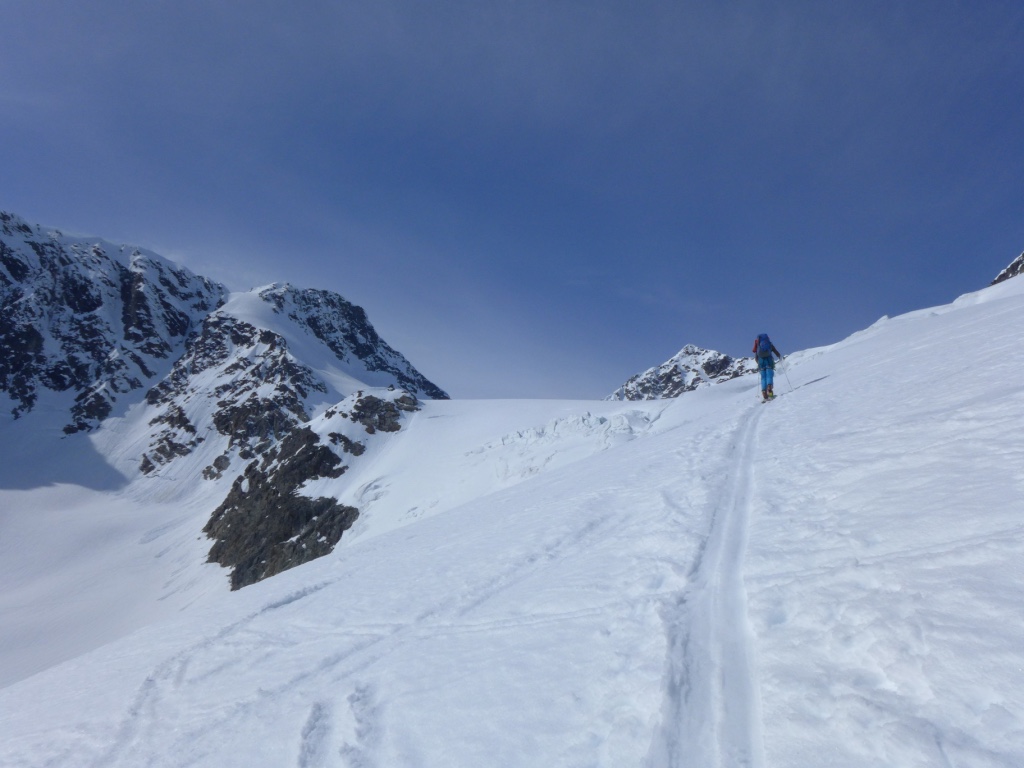 Audun on the Rotenvik glacier, with the crevasse field in the center of the picture. The exposed line to the summit is the band of snow above the cliffs in the left of the photo.

We reached the col in the early afternoon, finally catching up with a group of 4 frenchmen who had been ahead of us all day. They were turning at the col, and I grew uncertain of my own summit prospects. We still couldn’t see the main line to the top, just ski tracks that rounded the slope not far from were we stood. After some debate, Audun and I strapped on our crampons and headed off into the unknown, leaving our skis at the col.

To reach the main couloir we had to skirt around several steep, rocky bands. The snow near the rocks was so rotten that we sunk to our thighs at places. At the first rock band, the only obvious route was to down climb, dropping through the rotten snow with shifting rocks beneath us. As I turned around and carefully began stepping downhill, I felt my enthusiasm for this project waning. Why was I doing this? Why do I always have to put myself in the such uncomfortable, scary positions? I stopped, to take in the view and contemplate. 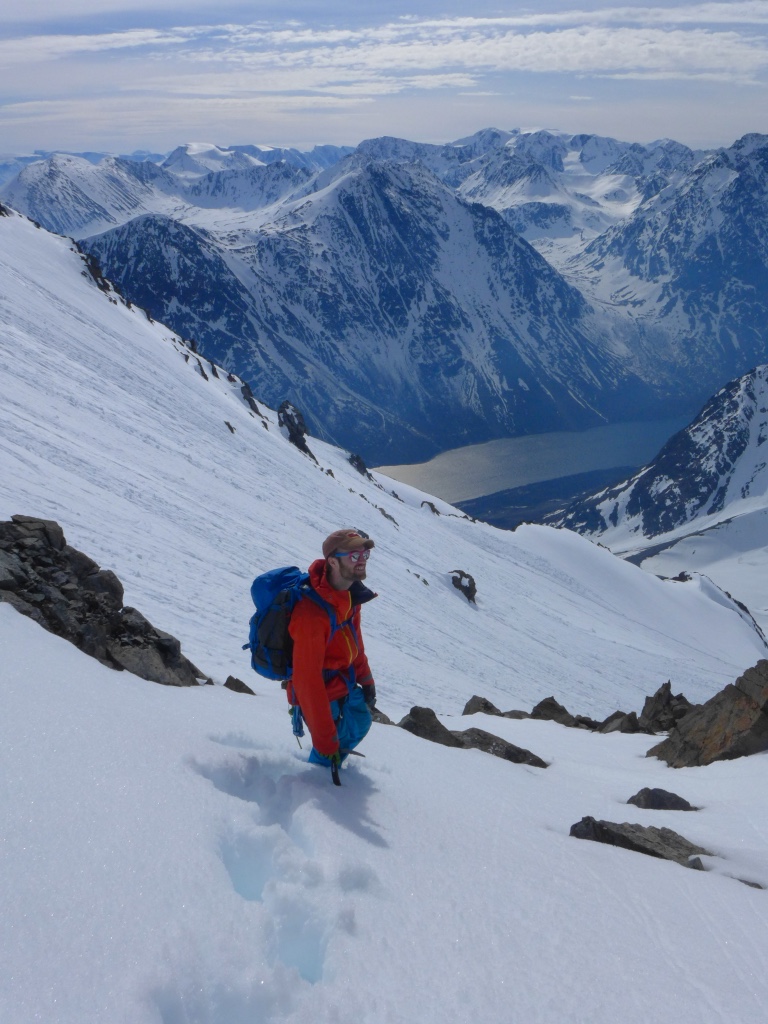 Audun in the rotten snow

“Do you want to turn around?” asked Audun.

“Do you think this is dangerous?” I countered, looking for an excuse to whimp out.

“No, not really,” Audun shrugged, “The snow conditions are pretty stable, except for this crap around the rocks. We can still turn if you’re not having fun."

I considered the prospect. “The thing is,” I said as I propped myself up on my ice ax and prepared to keep going, “If I don’t make myself do stuff like this, I’ll never get good at it.”

And so we continued on. 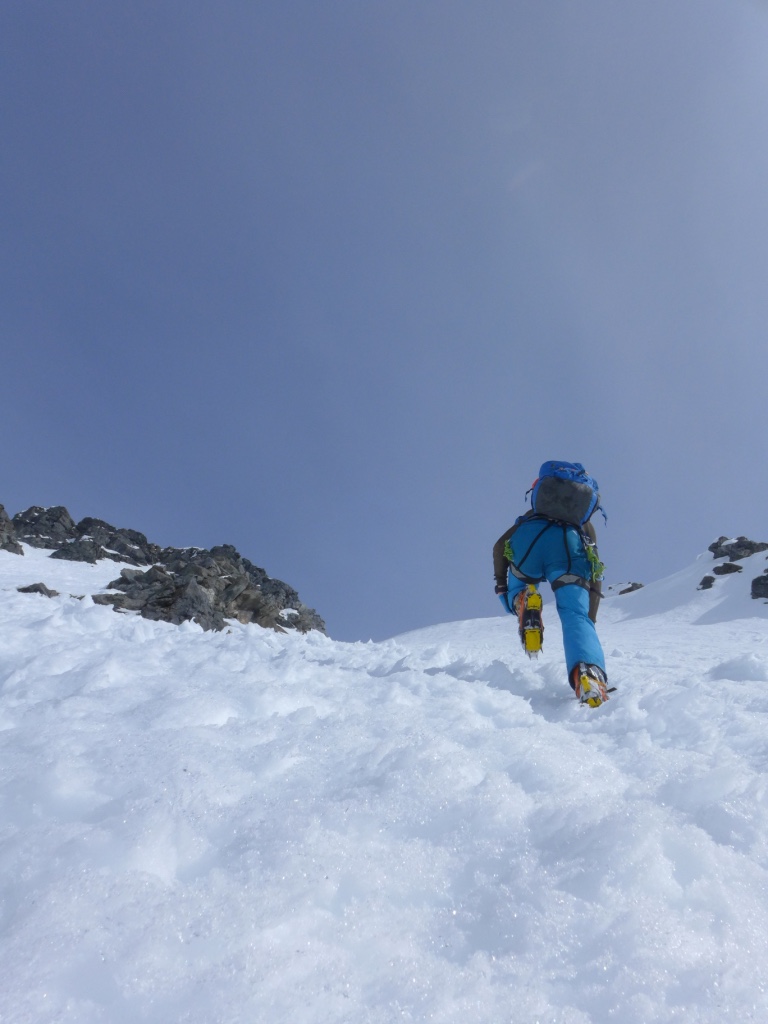 The down climbing on the rocks actually turned out to be the worst part - the couloir to the summit didn’t feel exposed because the hillside below wasn’t very steep. Besides, the whole couloir was what I would called a skiable grade (probably 40 degrees or less). I felt a little sad that we were going to have to boot down a perfectly skiable couloir, but I don’t think I would have made it to the couloir with my skis on my back to throw me off balance. 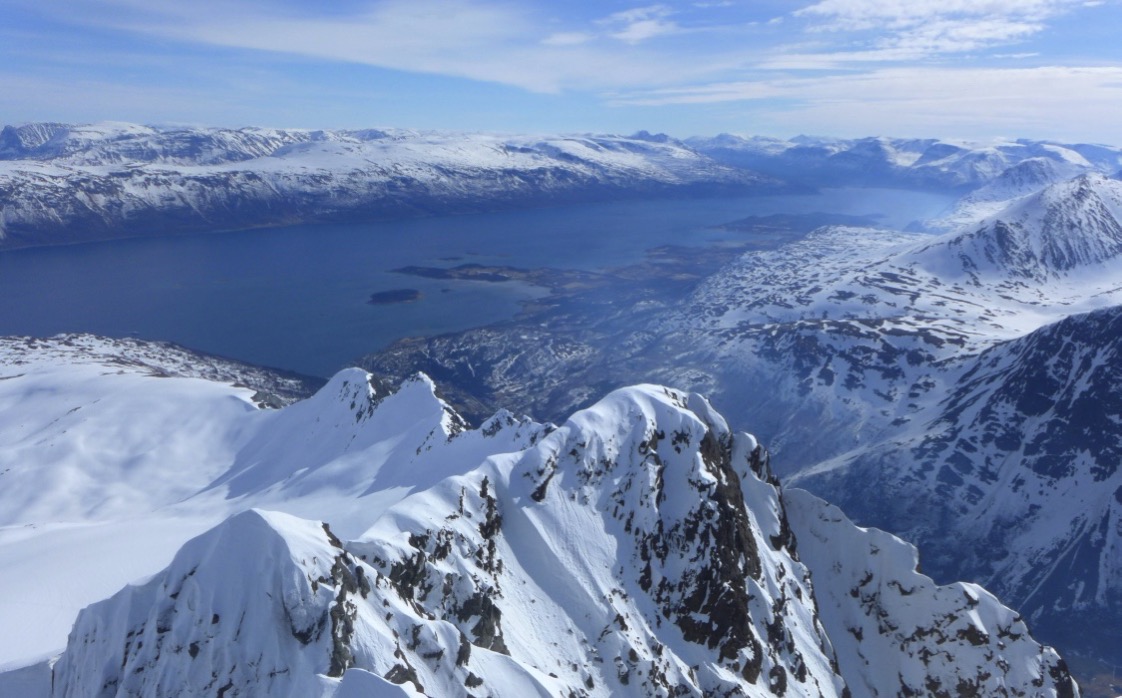 The view from the top of Store Kjostind

After taking in yet another breathtaking view, we turned to start our down climb, only to see three guys on top of the neighboring peak, Istinden. Interested to see what line they planned to ski, we kept our eyes on them as we walked down the summit ridge. They started to ski off the summit, and skied straight down to a bunch of cliffs.

“OK, either these guys are like pro skiers or they’re idiots!” I exclaimed. Audun tended to agree. “They could be planning to rappel?" 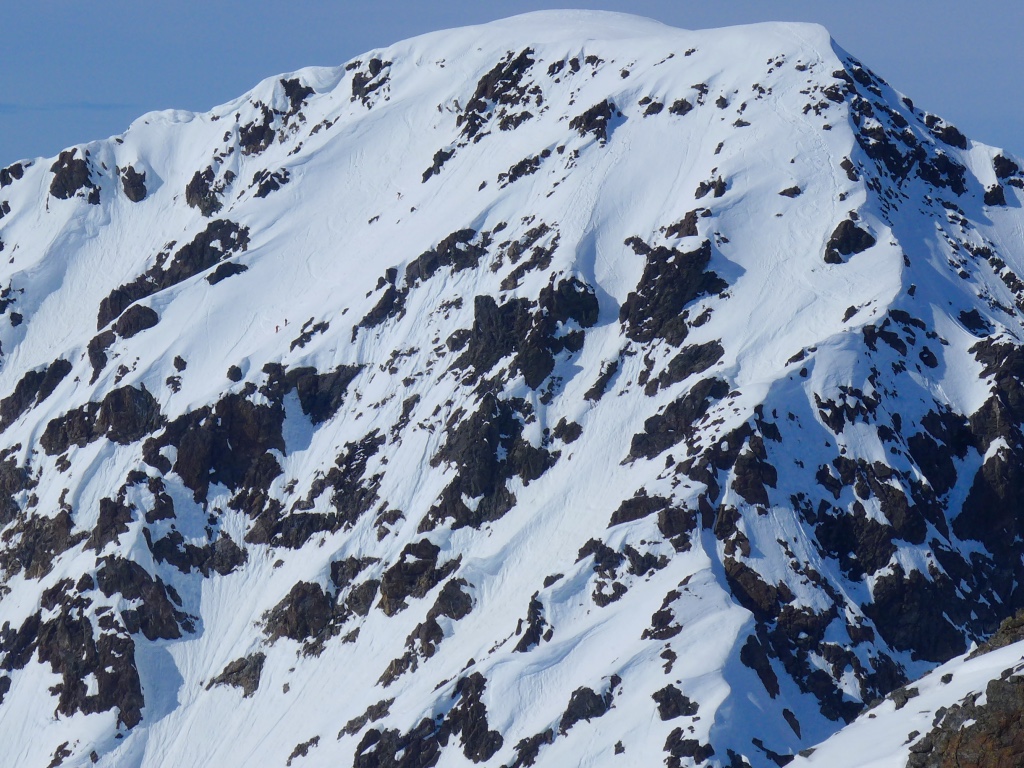 Three skiers nearly ski off a cliff from Istinden. Can you spot them?

They weren’t. They were idiots, and eventually they realized it themselves, strapped their skis on their back and boot back up to the summit. I was glad we didn’t witness a serious accident of any kind.

After reaching our skis, we cruised down the glacier in the afternoon sun, pleased with our little adventure. 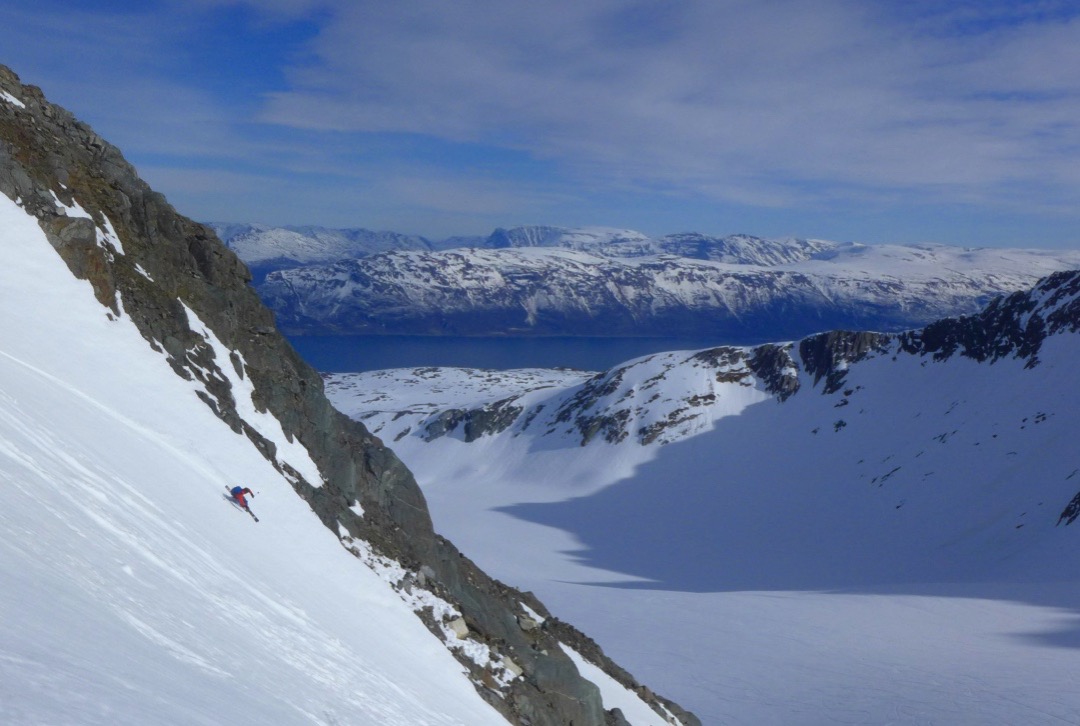