I spent the first week of May ski mountaineering in Northern Norway. Check out the first part of the adventure here!

On Tuesday evening, Dad flew to Tromsø to join Audun and I for the rest of the week of skiing. The sunny weather from the first days had passed and the weather forecast called for dreary grey. As long as the cloud cover stayed high, we should be good to summit some more peaks. After consulting various guide books, Audun and I found a suitable goal for the next day, a mountain called Durmålstinden. The route called for 4-5K of pretty flat skiing up a valley before climbing to the top of the peak. I imagined us gliding through the valley, quickly covering the distance and summiting the peak.

As we drove towards our goal, we were surprised to see how little snow there was on this southern part of Lyngen as opposed to the region we had skiied the first two days. We parked at a remote farm house called Skogly, from where we could see the top of the mountain, distant up the valley. As far as I could see, the peak was completely devoid of snow. Panicking, I was certain we had picked the wrong peak and alternatives started to run through my mind. Daltind? It’s a lot of extra driving. But there really wasn’t much snow anywhere in this region...

“There’s no snow up there,” I stated matter-of-factly.

“That’s not the face we’re going to ski though,” reassured Audun, “There’s like a bowl on the backside… I bet that’s filled with snow!” Skeptical, but willing to be optimistic, I agreed, and we strapped our skis on our pack and started walking into Rypedalen valley. 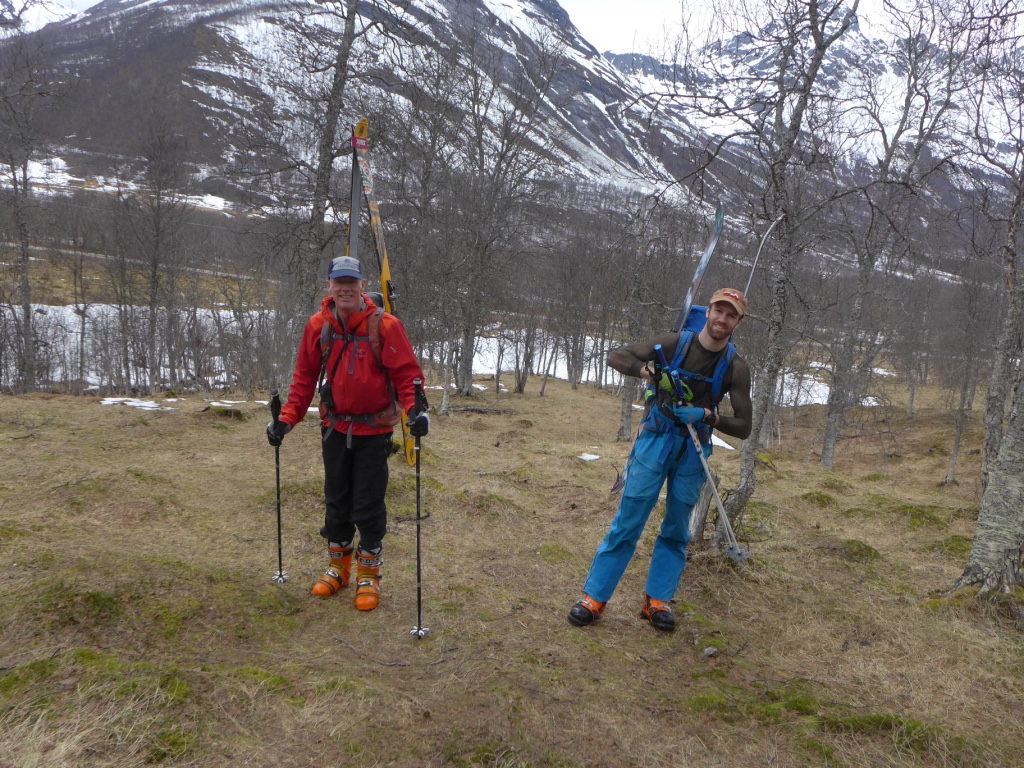 Dad and Audun, excited for some adventures in ski carrying.

We climbed steadily uphill through the forest, and I spotted a red fox slipping through the trees ahead of us. Soon small patches of snow morphed larger patches of snow and we decided to put on our skis. We followed in the labyrinth of snow patches and ending up skirting along on the north-facing valley walls. Still below treeline, we had to bushwack through tightly packed stands of thin birch trees. The progress up the valley was slow to say the least, but since there was no impending darkness to worry about we weren’t in any real rush. 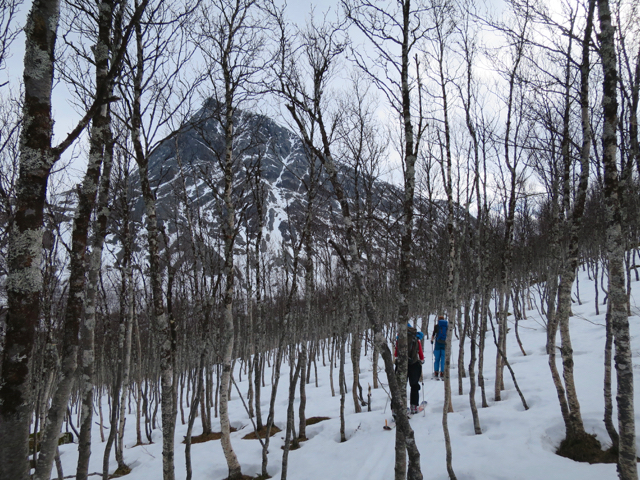 Me and Audun skinning through birch trees, with the summit of Durmålstinden visit ahead of us. Photo by Dad.

Still, it was frustrating when we realized all our uphill progress was for naught. The valley walls grew too steep to follow, and looking at the map we realized we needed to get to the other side of the rushing river below us. We slid down to the river and skiied along the river for a ways, scanning for a good place to cross. Our plastic ski boots are pretty waterproof, but woe betide the skier who gets their boots wet above the ankle! We finally found a suitable crossing, and put our skis back on, began skirting around the shoulder of the mountain. 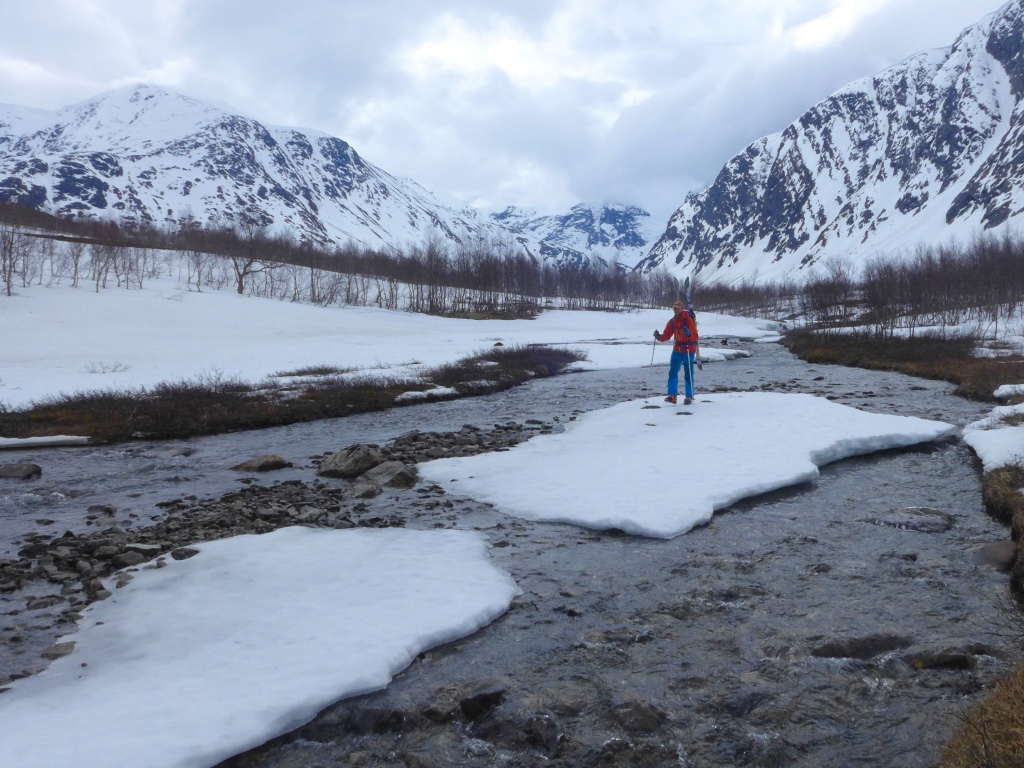 The name ‘Rydedalen’, meaning Ptarmigan valley, proved exceedingly appropriate as we saw at least 10 ptarmigan total during our ski. The ptarmigan were still in their white winter coats, and emerged suddenly, wings flapping furiously yet still barely lifting them off the ground and away from us. A brave one stopped and tried to stare us down. Undeterred, we snapped photos of it before skiing onward, still navigating patchy snow even though we had started to gain considerably elevation. 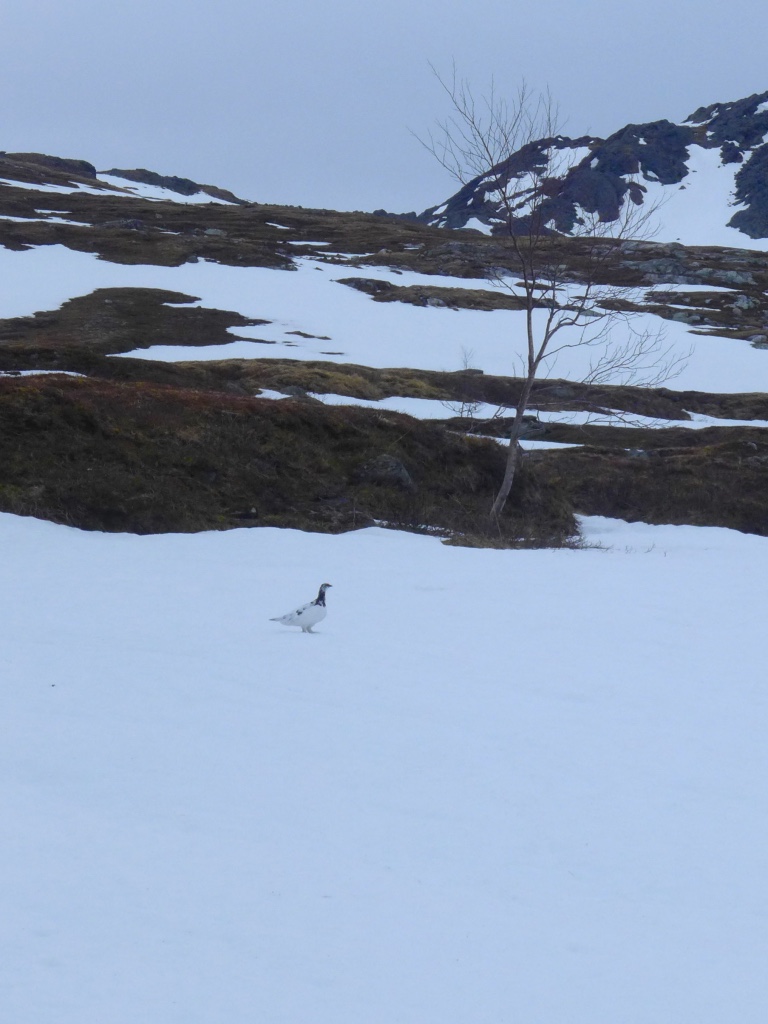 The bravest ptarmigan in Ptarmigan valley.

As we reached the shoulder between Biellogaisi and Durmålstinden, where the real climb to the summit should have begun, two things happen simultaneously. Firstly, the weather began to sour. Grey clouds descended on the mountain tops around us and a few drops of rain landed on the sleeve of my jacket. Secondly, we could finally see the bowl and upper part of the mountain, and my gut feeling had been right. There was almost no snow. All that bushwacking for nothing.

We sat down for a snack break, rather dejected. Looking around though, I realized it hadn’t been for nothing. We were in a beautiful valley, with mountains towering around us and glaciers spilling out from above. It was remote, it was wild, it was everything I love about Lyngen. But with the weather and conditions as they were, we decided it was time to throw in the towel. 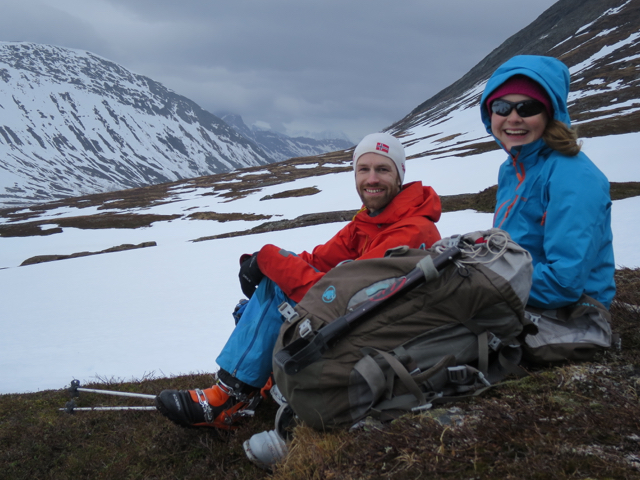 Lunch break at our high point for the day in the ever-worsening weather. Photo by Dad.

Usual descents give you something for free on skis, but descending the valley turned out to be nearly as hard as ascending it. We decided to follow a lower line, closer to the river, and had to take our skis on and off several times. The weather continually worsened and we were soaked by a light, cold rain. “Guess this builds character at least!” we joked. 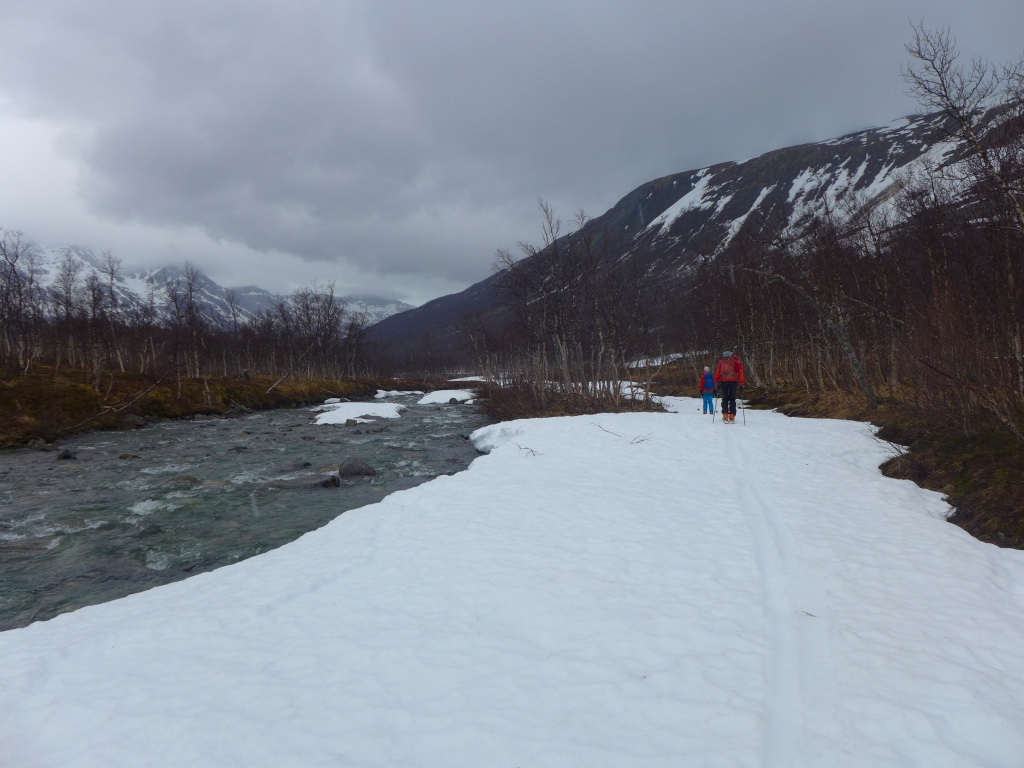 Dad and Audun pole down the last patch of snow before we capitulated and, once again, strapped our skis to our pack.

The cherry on the ice cream Sunday was several kilometers of walking on a barely-there, marshy trail with our skis on our back; since we had chosen a lower line, we walked more downhill than we had uphill. Dejected, but not yet despondent, we were happy to reach the warmth and safety of the car, and vowed to pick something with less bushwacking the next day.

By the time we set up camp in Lakselvbukt, the weather cleared off and we could sit outside to cook dinner. Gazing up at Fugldalsfjellet, the majestic peak above our campsite, we all agreed that was a worthy goal for the next day. Although there were some rocky patches on the mountain, there was a continuous line of snow all the way to the summit. And since it’s basically straight up from the fjord, we reasoned any necessary ski carrying on the lower part of the mountain couldn’t last for too long. 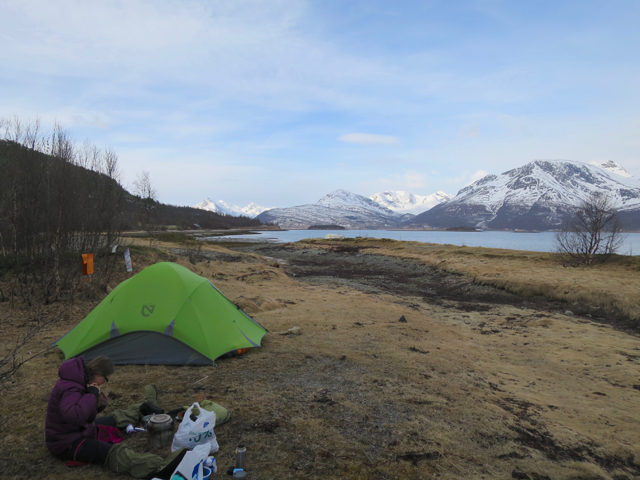 The campsite at Lakselvbukt. Photo by Dad.

We set off from our campsite towards Fugldalsfjellet early the next morning. We followed a trail for a kilometer or so before striking more directly towards the south-east face we hoped to ski. After leaving the trail, the walking went from pleasant to horrendous pretty quickly. To avoid the bushy forest, we crossed numerous open boulder feels. I felt like a old lady, using ski poles as support as I stumbled along in my stiff-soled boots. 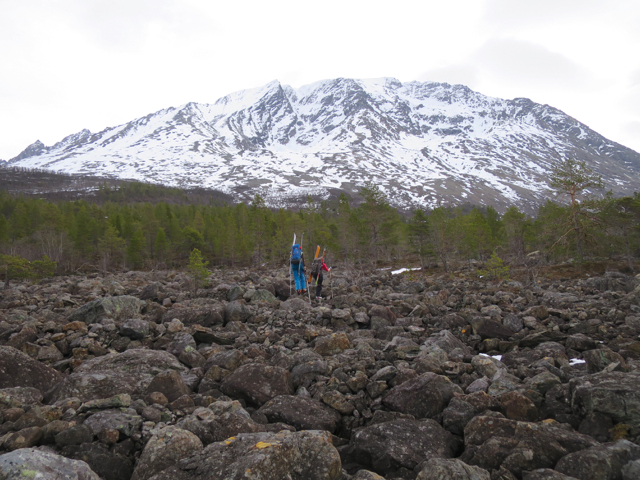 Crossing the boulder fields below the Fugldalsfjellet massif. Our intended line was up the bowl on the left side on the picture. Photo by Dad.

Eventually we hit snow, and I vowed to myself that today - today! - we would make it to the top and all the bushwacking would be worth it. Everything seem to be going swimmingly; we were climbing rapidly and there was more and more snow, albeit rather rotten in places. Even the weather was more promising that the previous days failed expedition. 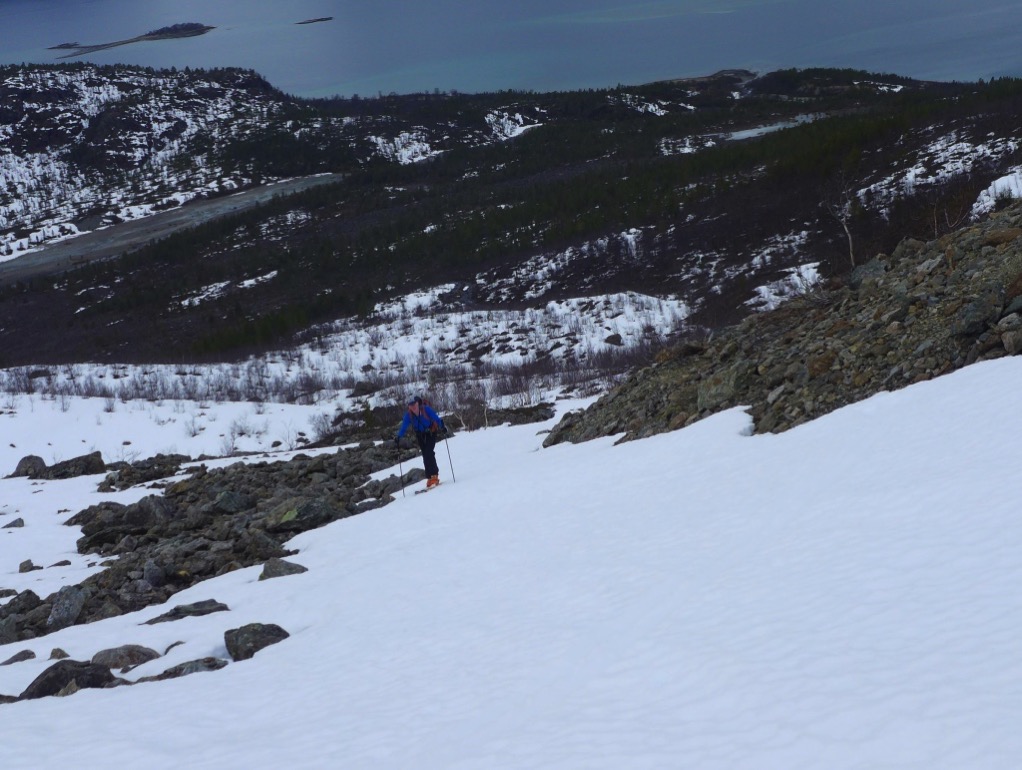 Dad skis through the patchy snow on the lower slopes of Fugldalsfjellet.

Then we drew close to the mouth of the south-east facing couloir we hoped to ski, and all of my optimism was blown away in a single breath. This wasn’t the snowy wonder we had convinced ourselves it must me. Most of the snow had been scraped clean from the face by an enormous slab avalanche. Even more ominous was the upper part of the face, which was intact and pristine. Did it have the same dangerous slab potential, or would it be safe to cross? As far as I could tell, we couldn’t judge the snow properly until we were on the potentially dangerous upper part of the slope. Still, I agree to continue a little ways, to attempt to find a way around the avalanche runout and into the intact upper face. 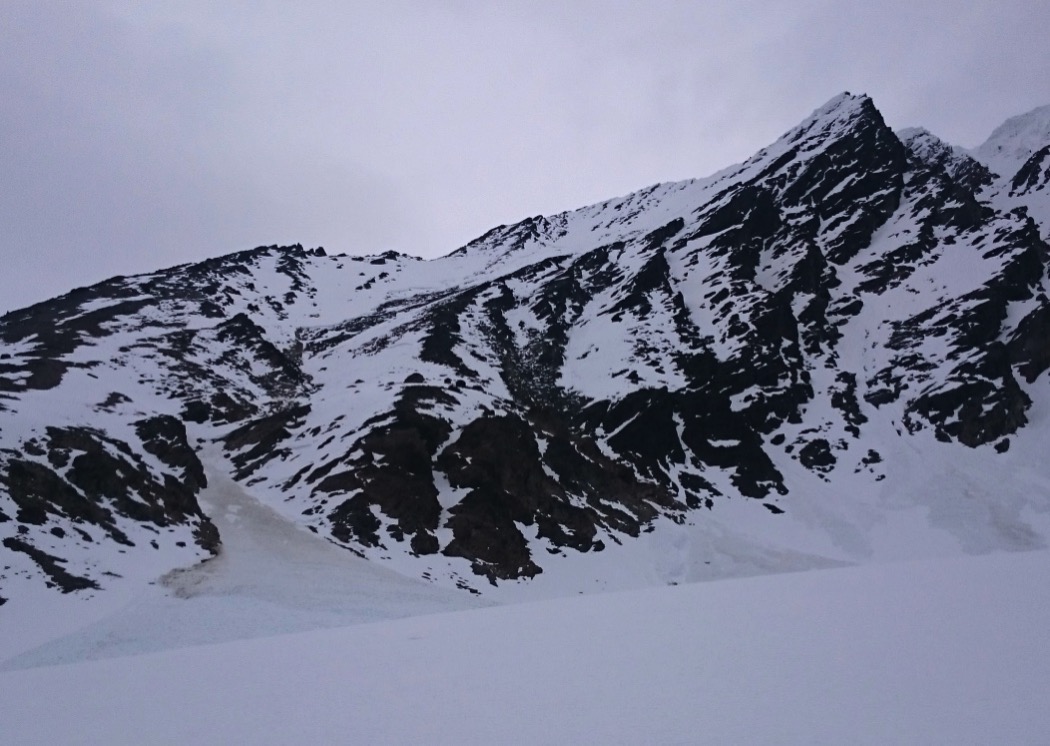 Our intended line and the avalanche runout.

Things grew pretty hopeless from there, and I soon realized that we wouldn’t be reaching the summit that day. I had a bad feeling about the upper face, compounded by the extremely rotten snow we were skinning up. Halfway in vertical to the summit, we decided that today was not a day to die in the mountains, and once again turned. 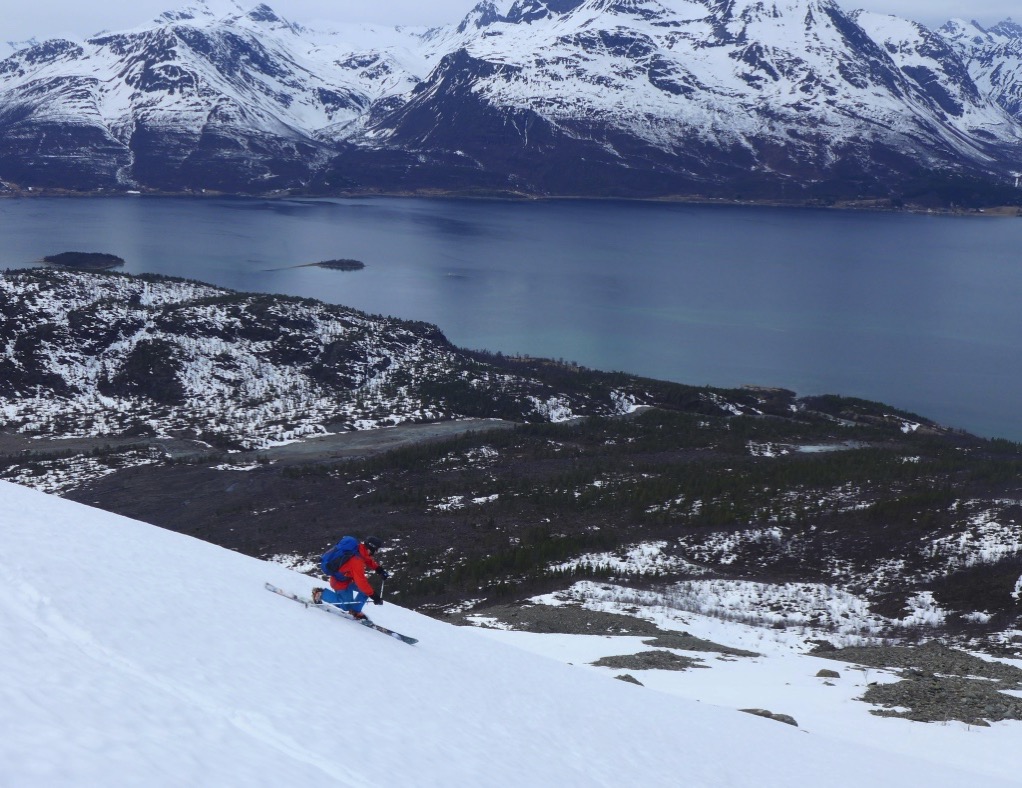 I fell into despair as we descended.  How could we choose the wrong summit, two days in a row? Why hadn’t we thought a little more about what aspect to ski, or gone back to the northern region of Lyngen where we were sure there was snow? I was a failure and this whole trip was a waste of time if all we were going to do was carry our skis around in the forest. 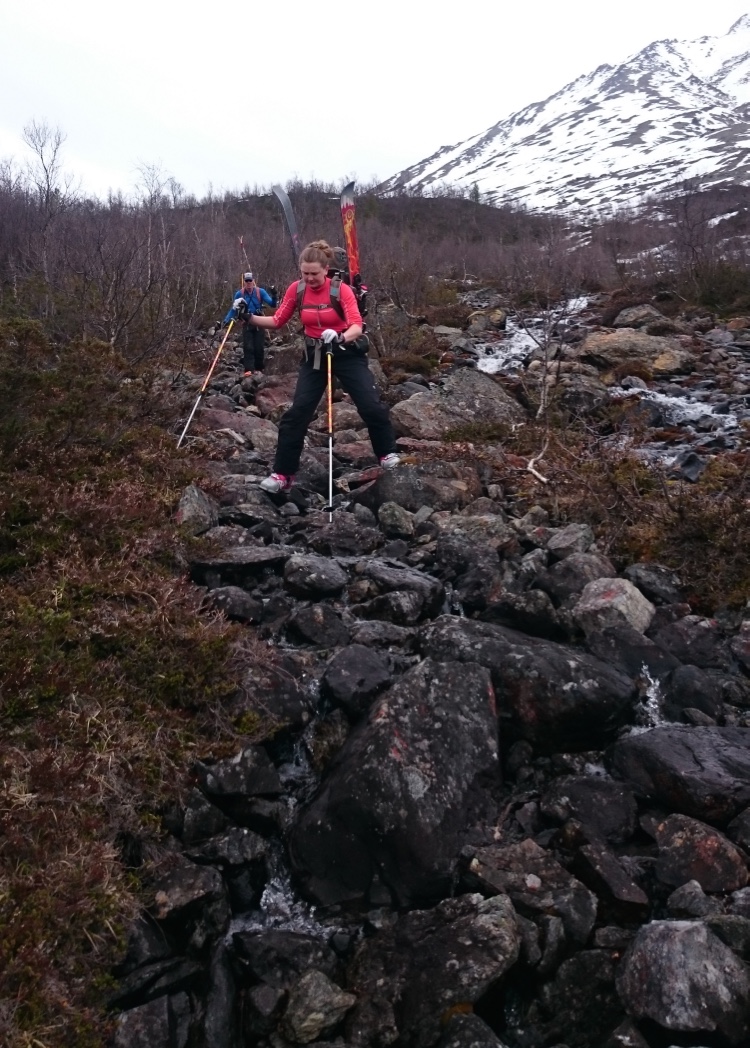 We decided to go back to Tromsø and regroup (and shower!). Clearly the heat of the week before combined with the lack of freezing nights had melted more snow than we realized initially. We needed more information about where there was still snow. We needed to find a peak we could summit, or bust!