I spent the first week of May ski mountaineering in Northern Norway. Check out the first two parts of the adventure here and here!

After two days of what can barely be called skiing, we picked up my sister Zoe, who is a student in Tromsø, and headed back to Lyngen to try, try again. The car ride was a tense affair. To be honest, I was sick of the rotten snow and bad weather, and felt like I would rather go home. But we were there for another three days, and ski we would, even if my expectations were lower than ever.

It was a couple hours drive to the parking area at the base of Storgalten, and I was reassured, if not overjoyed, to see a bunch of other cars parked there. Clearly others had the same plan for the day as us; maybe there was hope for decent snow conditions and less bushwhacking.

Although we started out carrying skis from the car, that particular state of being only lasted for about 15 minutes. Soon we were sliding along on our skis rather than lumbering up hills in stiff ski boots, skis throwing us off balance in the terrain. 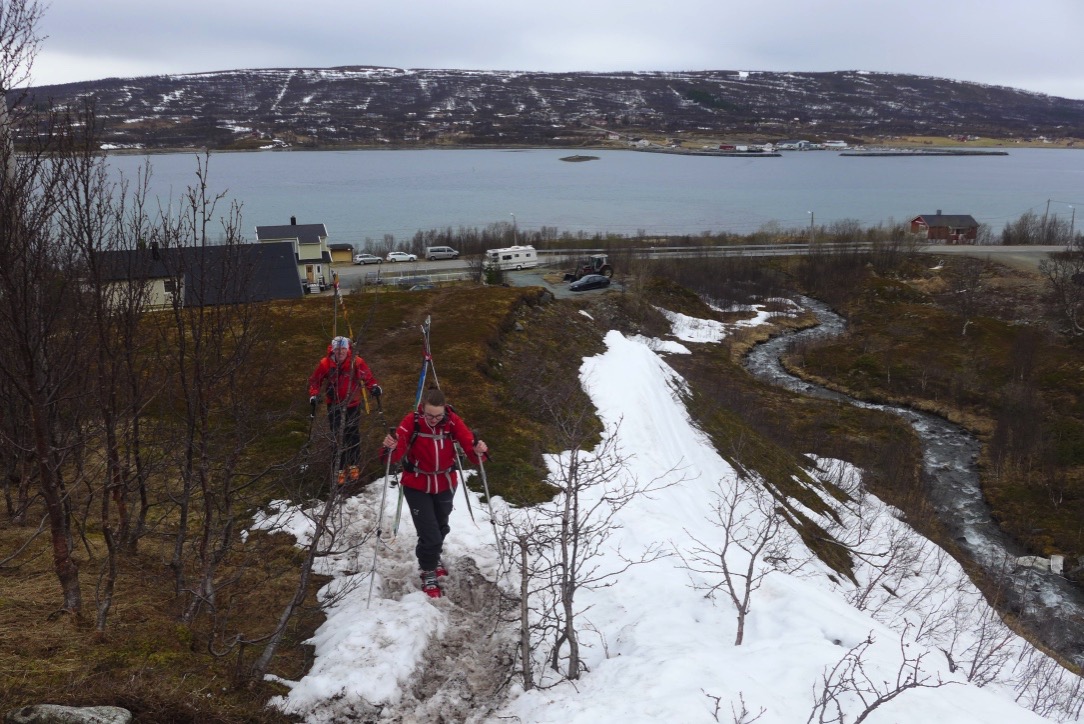 Dad and Zoe finding the first snow on Storgalten

All things considered, I was feeling great. Something inside me said “click" the moment I clicked into my skis. The anxiety about the tour of the day lifted, and I was light, floating up the hill despite my heavy ski equipment. Forward motion wiped away any doubts and questions and left only the pure drive to move through the mountains. 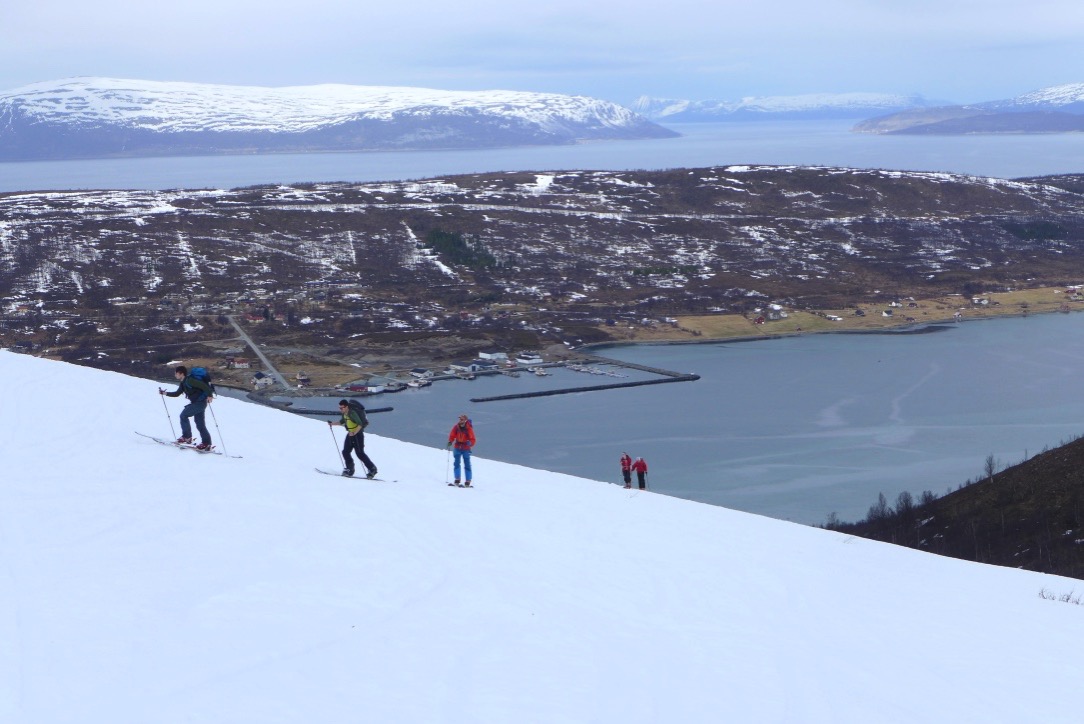 Two unknown skiers followed by Audun, Zoe and Dad crest the hill above the fjord.

The route up Storgalten is very straightforward, basically just a 1200-meter hill straight up from the fjord. The hill was well-worn with ski tracks, both uphill and down, but this was spring skiing, not hunting for fresh lines of powder. And it didn’t look half bad!

Audun and I climbed steadily, stopping to regroup and eat lunch with Zoe and Dad, then pulling away in the last few hundred vertical meters to the top. Someone had dug a bench into the snow at the summit, which functioned both as a comfortable seat and barrier against the chilly wind. We sat, eating sour candy and taking in the view all the way across the Gamvik glacier below us and further to the spires of the peaks of southern Lyngen. Another large group of skiers, all men, had reached the summit just before us and were discussing whether they were going to bag some more peaks in the area that day. I wanted to join them, to slide across the glacier and climb to another summit, but I knew that today, this peak had to be enough. 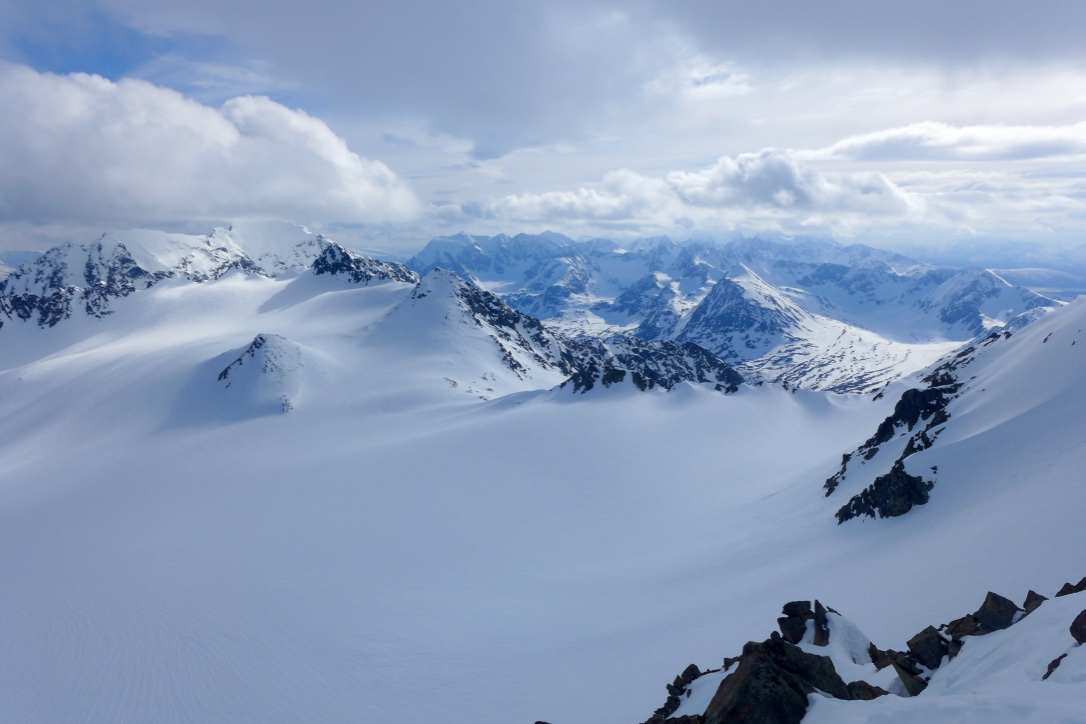 (Part of) the view from Storgalten

Soon enough, Zoe and Dad arrived at the top and we prepared for the descent. The ski down from Storgalten provided turns in slushy corn snow and a steady slope in the 30-35 degree range for our enjoyment. 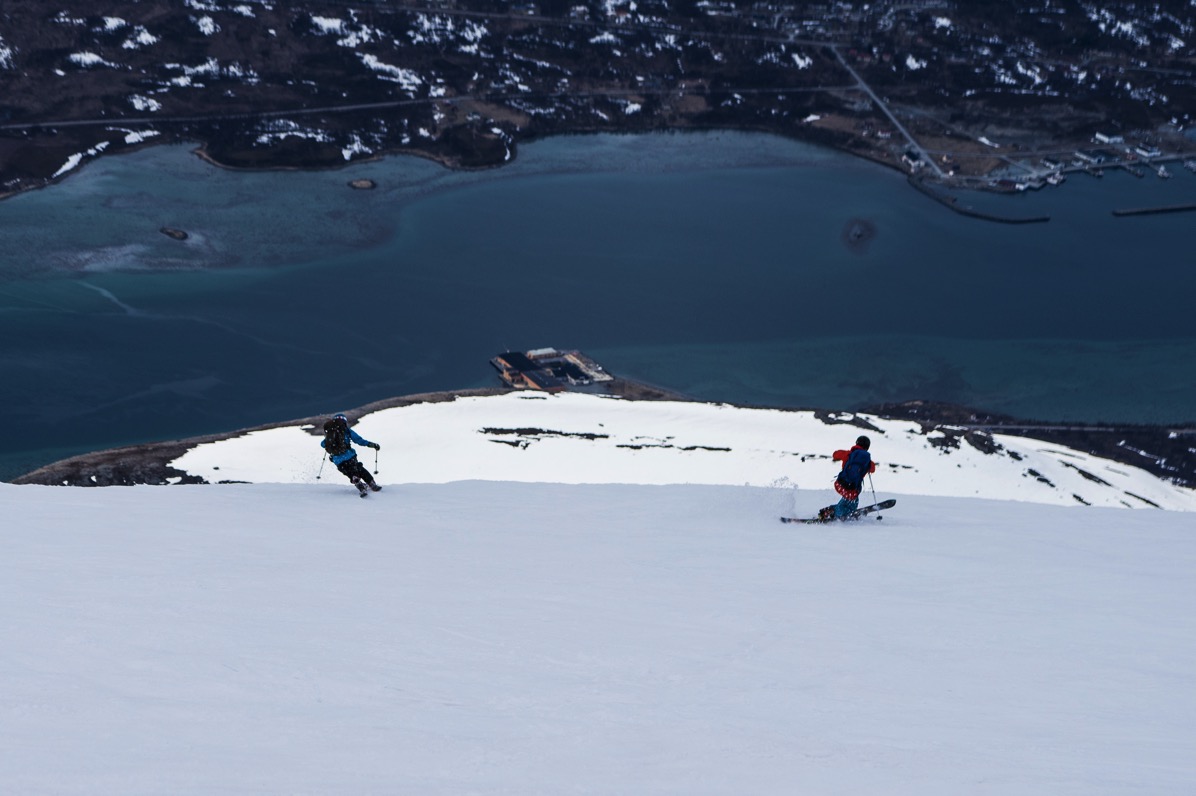 Audun and I descending Storgalten. Photo by Zoe. 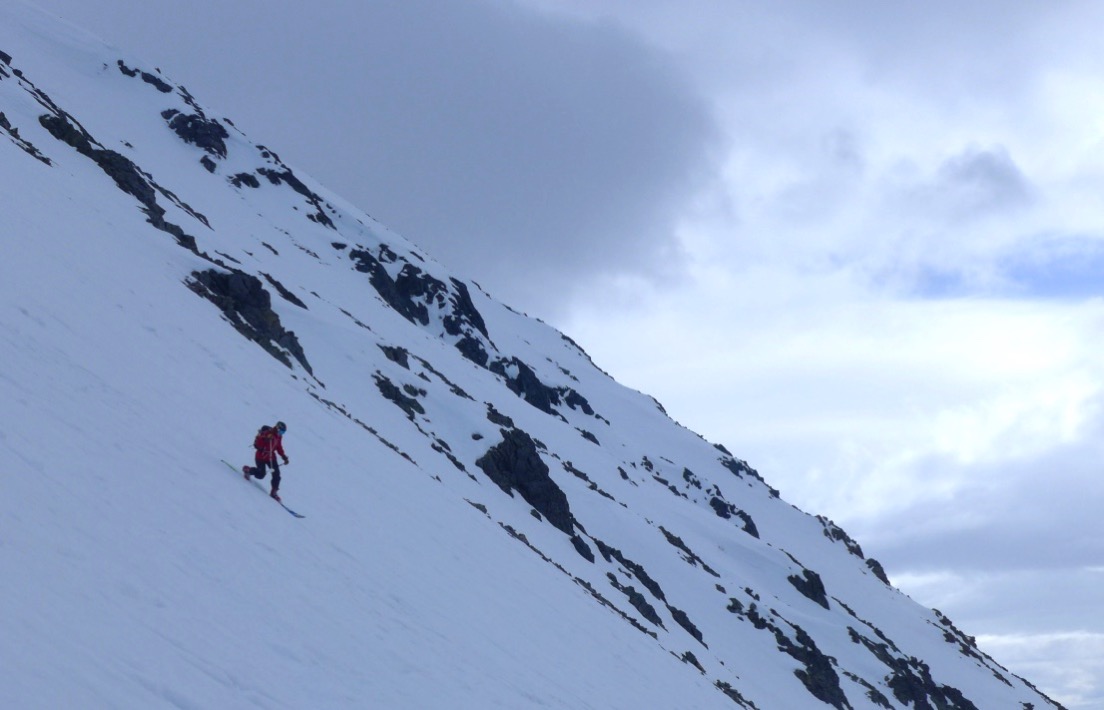 That evening, we camped along the fjord at Tytebærvika and plotted the next days ascent. The weather forecast was relatively ambiguous; it could turn out to be an overcast day with low cloud cover, or we could get some sun (I guess that’s the kind of weather you get in coastal Norway!). Hungry for a larger peak than Storgalten, we decided to try Daltinden near the center of the Lyngen peninsula. 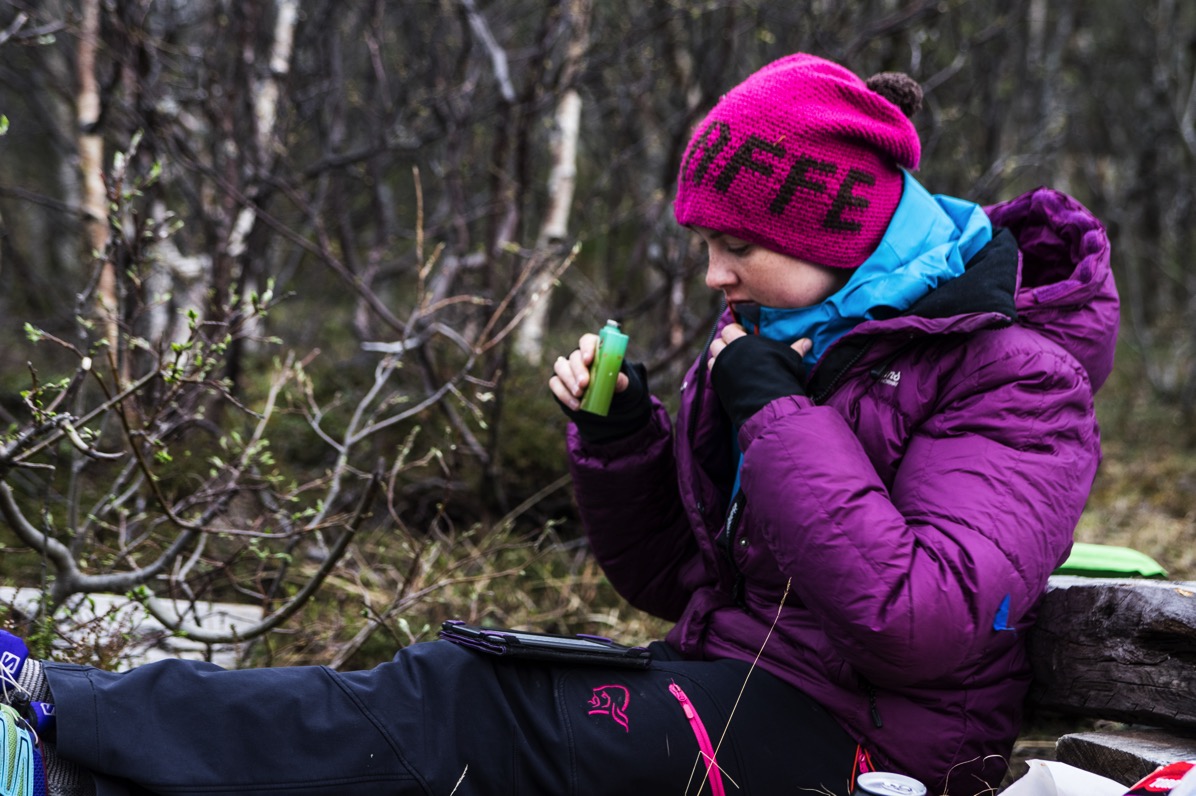 Reading in camp with my flask of whisky. Photo by Zoe.

As forecasted, the weather was kind of everything at once the next day, alternating between overcast, rainy and hot sun. My optimism swung with the bouts of sunshine. Once again, we were carrying skis up a brushy valley, but at least there was a tractor road to follow. Well, it stopped being a tractor road rather quickly and became a trail. Well, a trail mostly created by meandering sheep, but there was hope in the faint trace going in the right direction. 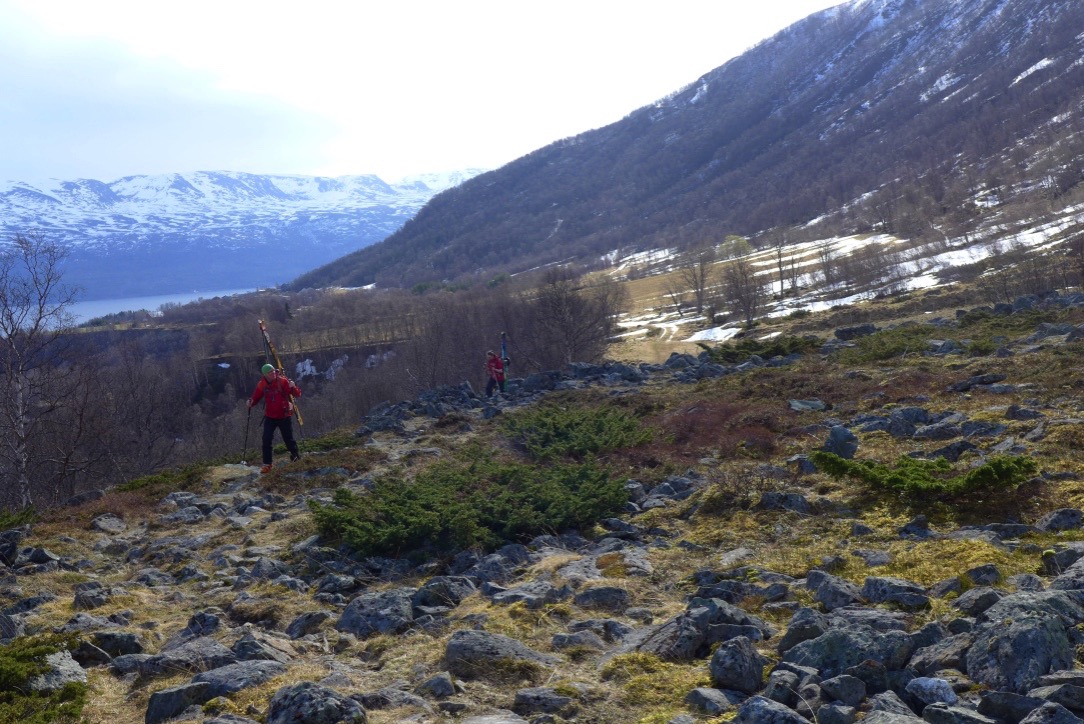 Dad and Zoe on the ‘trail’ to Daltinden.

We spent an hour or so walking up valley before we finally strapped on our skis and headed uphill. The first hundred vertical meters on snow were spent zigzagging through an endless garden of sharp rocks. This was not shaping up to be fun downhill skiing. Still, gazing up at the mountain above us, we could see a lot more snow in our future.

The climb above the valley brought sweeping views of glaciers spilling out from some of Lyngen’s highest peaks: Kveita, Jiekkevarri and Balgesvarri. Their summits were capped by clouds, lurking for another day. 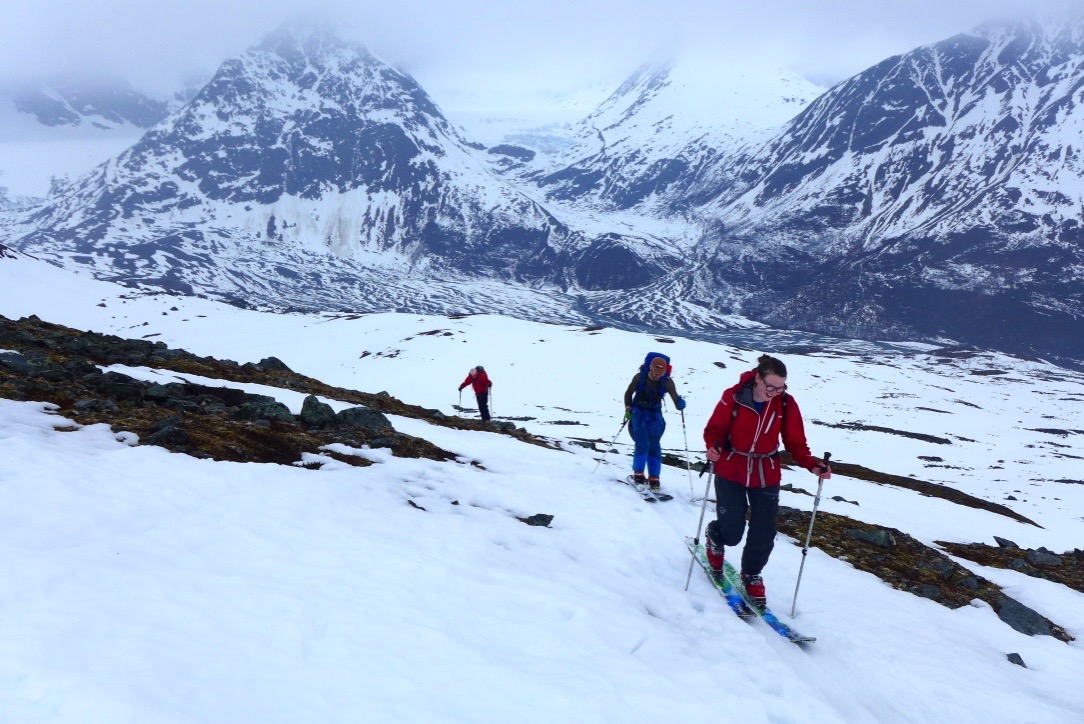 Dad, Audun and Zoe above the beautiful braided glacial outwash in the valley

Zoe grew tired on the climb, and complained of a sore hip. Audun, Dad and I, however, were single-minded in our drive to go to the top. We were not about to turn around and admit defeat after another long seance of ski carrying! So we coaxed Zoe up the hill, moving slowly and taking frequent breaks. I felt kind of bad, forcing her to go to the top if she wasn’t feeling great, but I knew she could make it.

A layer of clouds lay around the summit of Daltinden. Frequent breaks of sun on the climb left me hopeful that it would clear just as we reached the top. The clouds didn’t budge despite my wishes, and on the summit plateau there was zero visibility. We turned somewhere on the summit plateau, not willing to waddle around in the fog looking for a summit cairn. 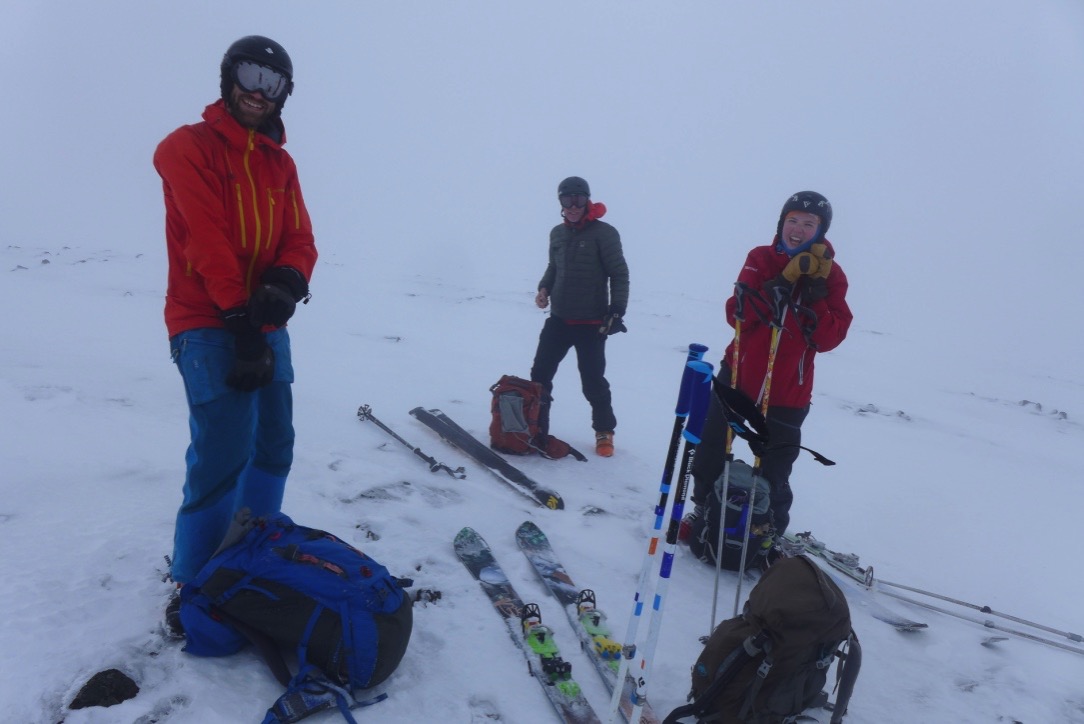 Enjoying the view from the summit (not).

The descent soon brought us below the summit cloud cover. 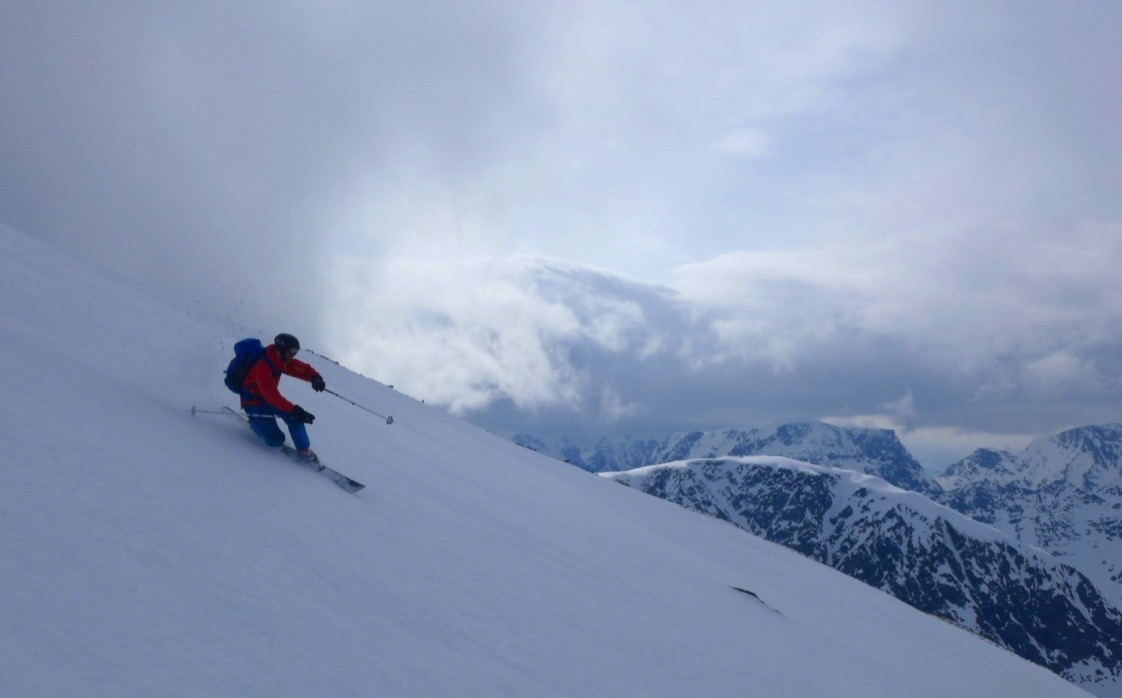 Audun skis through the weather divide

Despite the high temperatures in the region for the last couple days, we were high enough that some of morning’s rain had fallen as fresh snow. Even though it was just a thin layer, I’ll claim bragging rights to having skied pow in May! 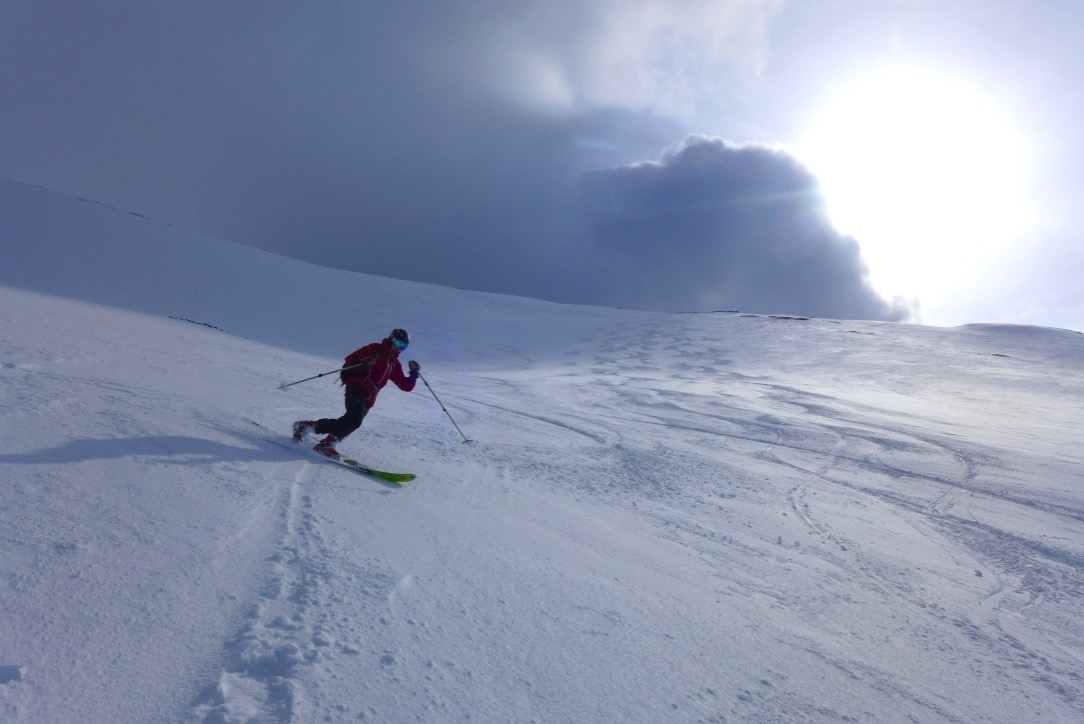 Zoe and the meager fresh pow. 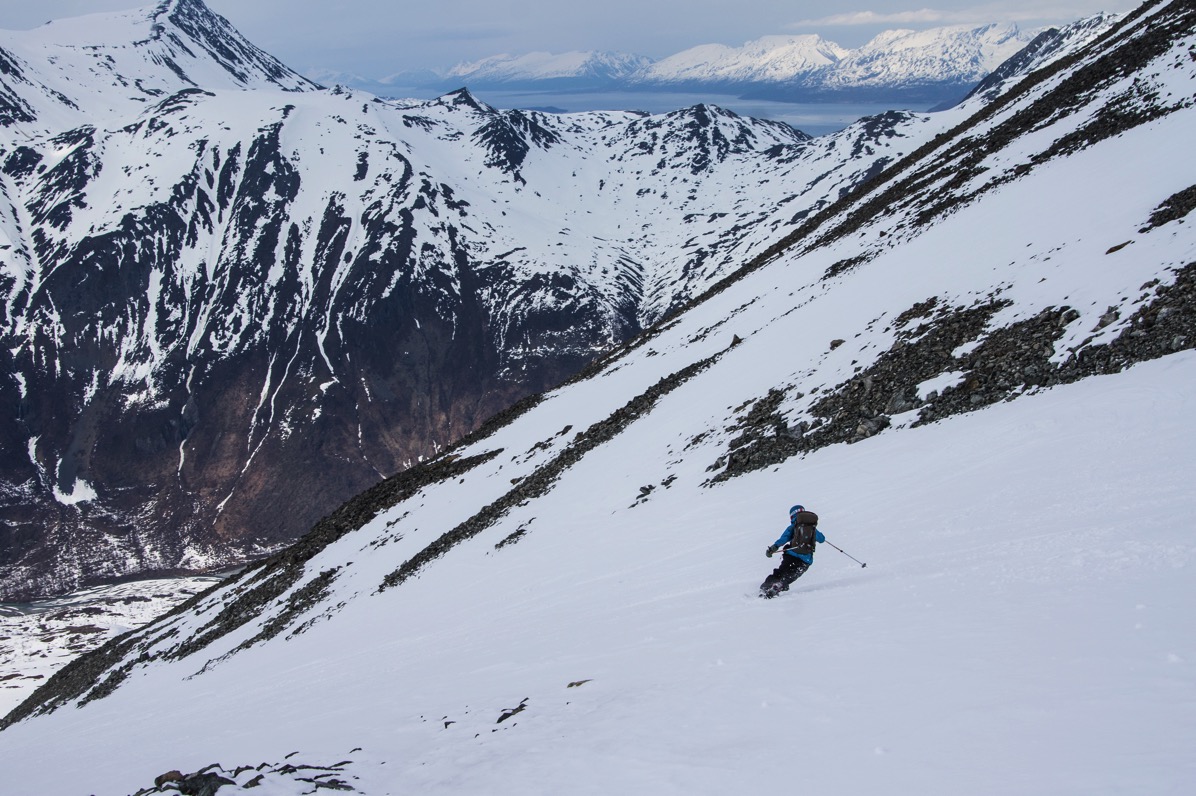 Me on the descent. Photo by Zoe.

Elated by our success and another good descent, the 5K walk back through the valley seemed almost pleasant. That is, until I realized we had been out for nearly 10 hours and my stomach started growling!

For the last day of skiing, we set our sights on a peak close to Tromsø called Andersdalstind that had been recommended to us by a local. His recommendation was on point; we were able to ski directly from the car rather than carrying our skis as we had grown both accustomed to and weary of. Ascending Andersdalstinden, before the weather really started to come in.

Only half way up the mountain, the weather went from mediocre to terrible. The clouds crept lower and lower, and it started to snow heavily. Additionally, upon reaching the main bowl to the summit we discovered that it was filled with packed, icy snow - not enticing conditions. Still 400 vertical from the summit, we decided to turn in the deteriorating weather. After descending in heavy falling snow that turned into driving rain at the base of the mountain, we were happy to relax over a cup of coffee in Tromsø while watching the rain come down outside. After all, we had earned it.