Last Wednesday evening, I ran Fjellseterløpet, a 8 km uphill race gaining 440 vertical meters here in Trondheim, Norway. I consider this race to be a very revealing test of what kind of shape I’m in. For this very reason, I was extremely nervous before the race. I have been training hard since February (more about that at the end of this post), and I thus expected to run much faster compared to the two previous times I’ve run this event (both before the inception of this blog).

Due to their interconnection, this post will be divided into two parts: the first about running the Fjellseterløpet, the second about what I’ve really been up to since February!

Fjellseterløppet: Pain in the rain

I got a text message from dad, whom I had convinced to sign up, the day before the race. “Have you looked at the weather forecast?” he asked. I had not, so I took the opportunity to do so. It was awful. This year’s Fjellseterløpet would be very cold, wet and windy indeed, not exactly the optimal conditions for setting PRs.

It was already drizzling and cold at the start area, but the bus carrying bags to the finish left early, so I had to ditch my rain jacket. Masses of people jogged around, trying to keep their muscles in some semblance of warmth. I saw many familiar faces: Sigmund, who would be duelling it out Audun like they did on the way up Togga, and Ivar, who would sprint up the hill miles ahead of me as usual. 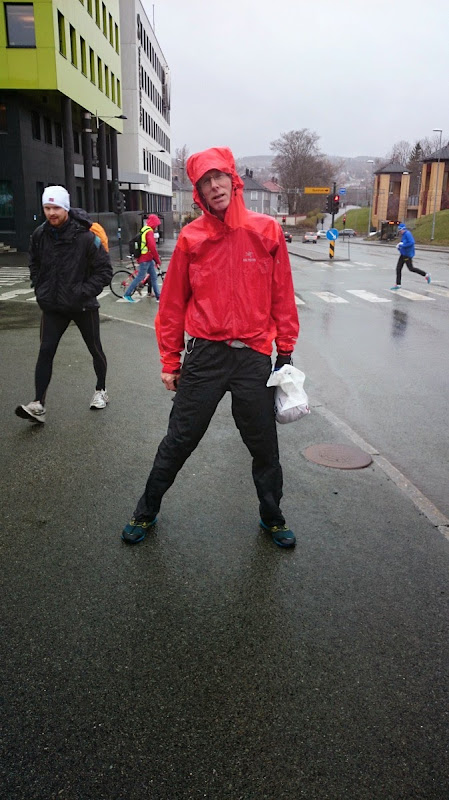 The crowd started to assemble around the starting line, and I followed suit. I was somewhere in the middle, not sure if the group around me would be too fast or too slow. I saw another familiar face, Eirik, waved, and we started chatting.

“I was just back there, warming up with Petter Northug,” Eirik claimed casually.

Eirik is somewhat of a joker, so I thought he was joking “No, he’s not!” I exclaimed.

We didn’t have time to argue about the fine details of the matter, because even though I didn’t hear the start gun go off, the mass of 600 people started moving, and I started my watch. We were off.
I quickly decided that the masses of people around me were moving too slowly. This was, after, the only flat kilometer on the course. I started weaving and dodging and moving forward until I felt like I was going fast enough, loosing dad in the process. Oh well, I thought, he’ll surely catch me on the hill.

The Fjellseterløpet course profile. Does this look like your kind of fun?

The start of the hill goes up Breidablikkveien, a steep road that I bike home from work nearly every day. I knew these first two kilometers of hill were the steepest part of the race, and I was determined not to blow up. My plan was simply to keep my heart rate at a steady value and not let myself get carried away by the race. Easier said than done. People will passing me left and right, included the aforementioned Eirik. I kept expecting dad to show up, and even glanced over my shoulder a couple of times. Stop it! I scolded myself, Just run your own race.

It rained steadily as I chugged up the hill, and the light headband I wore grew soggy and started to slide down. I crested up over Byåsen Butikksenter (a local shopping center), noting my time: 16 minutes. I was on time for breaking my PR, but the work wouldn’t stop here. 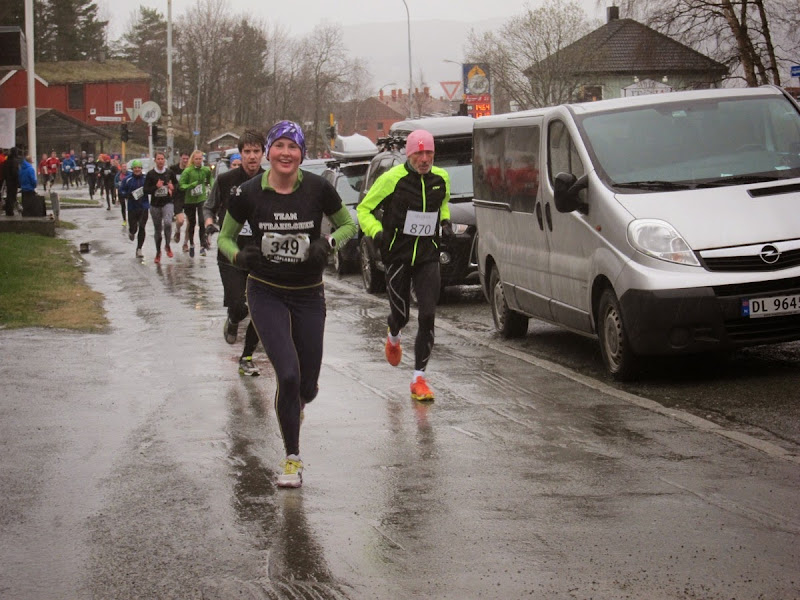 The first part of the race is about finding a steady rhythm and not blowing up. The second part, the last 5 km past Byåsen Butikksenter, are about keeping your speed up. You grab hold of the monster that is an uphill race, and you hold on, riding the beast and not letting yourself fall off.

I felt like my legs really started responding after Byåsen Butikksenter, and I started passing people. I played a game: could I cruise past them, shoes thunking evenly, without raising my heart rate significantly? I was 5 heartbeats below my limit and determined to keep rolling. Soon I saw Eirik a few hundred meters ahead of me. Could I catch him?

The kilometers passed in a blur of wet asfalt and the sensation of being just below my threshold. It hurt, but it was bearable. Finally, I passed the 7 km sign - only 1 km to go! - and I felt myself growing sick of the whole experience. Only 5, maybe 6, more minutes, I tried to encourage myself, don’t let your pace drop now! I was gaining on Eirik.

Five hundred meters before the finish, I saw Petter Northug walking down the road towards me. It was a very strange feeling, working so hard that I felt dizzy and then being sort of star struck by a famous skier who I’ve only ever seen on TV. I felt I needed to catch Eirik and tell him.

I started sprinting, and bellowed: “Eirik! I saw Petter Northug!” Eirik looked startled, and he later told me he found it scary that I was able to yell at that point! My surge was quickly over though, and I didn’t quite catch him. I still managed to sprint for the last 100 meters, passing one more person. The finish line wasn’t clearly marked, and I looked around, confused as I crossed.

I finished in 44:15, a three-minute PR, with Eirik 13 seconds in front of me. Dad rolled in two minutes behind me. Audun and Sigmund duelled it out, Sigmund dusting Audun by 1 minute (finishing with the scorching times 38:24 and 37:20, respectively). Audun pushed so hard to make up the difference that he vomited on the finish line.

As some of you may be aware, my A-races this year are Nordmarka Forest Marathon (previous race report here) on June 22, and UltraVasan 90 km on August 22. Currently, I’ve been focusing on the marathon distance in my training, and I plan to follow up this solid cycle of training with some big back-to-back long runs in the July to prepare for UltraVasan.
I sometimes feel like running is self-imposed OCD. Other times I think it’s freedom. Maybe it’s a quantum juxaposition of both? I voraciously tick of miles, obsessively counting, at the same time as I fly around the city, exploring places in Trondheim I wasn’t aware of even after 10 years of living here.

I’m following a training plan for the first time in my life. It’s Daniels 18-week Q2 marathon plan, which I like because it’s really open. Basically, there are two ‘quality’ or important workouts that I have to do each week, and the rest of my running is based on what I have time for. As someone who likes to ski tour a lot during the winter, it’s important to me not to have to hit a certain number of miles each weeks.  I think long ski tours build my body for racing marathons pretty well!
So how has it been going?

Training through the winter wasn’t easy. I had to get in a lot of runs in the dark and snow, but luckily I invested in Icebug Anima studded running shoes so I could basically go anywhere, and I have a Petzl Nao headlamp to keep me company in the dark. 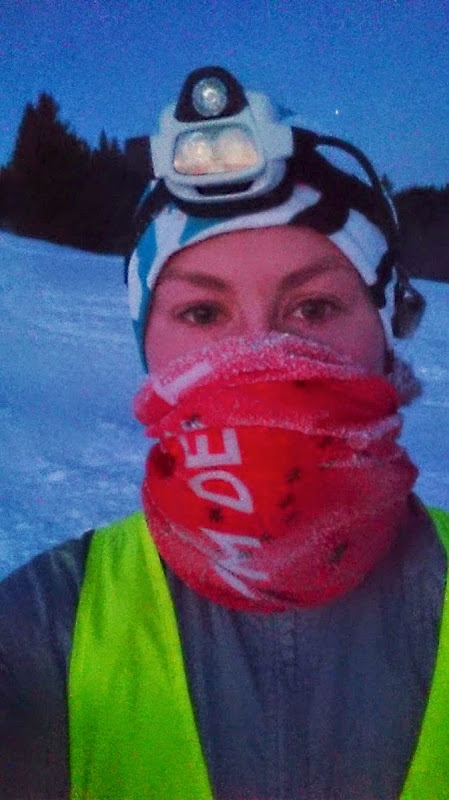 And then the sun came back. I love running in the sunrise, and in March I got to do this surprisingly often (now the sun rises at like 4:30 am, so, um, not happening). 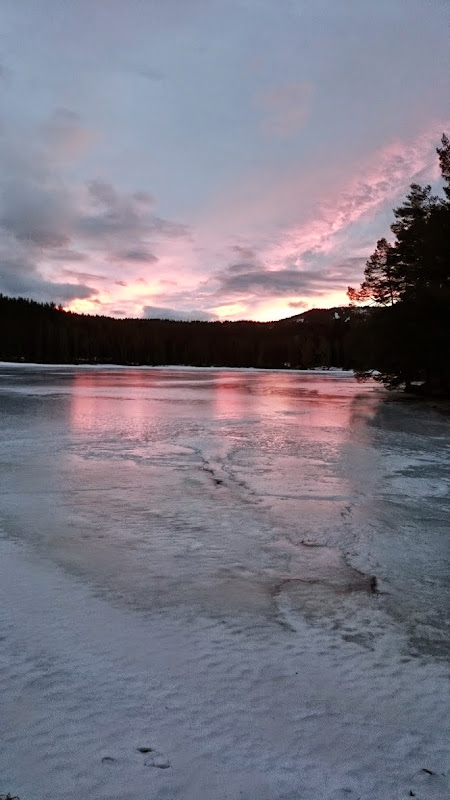 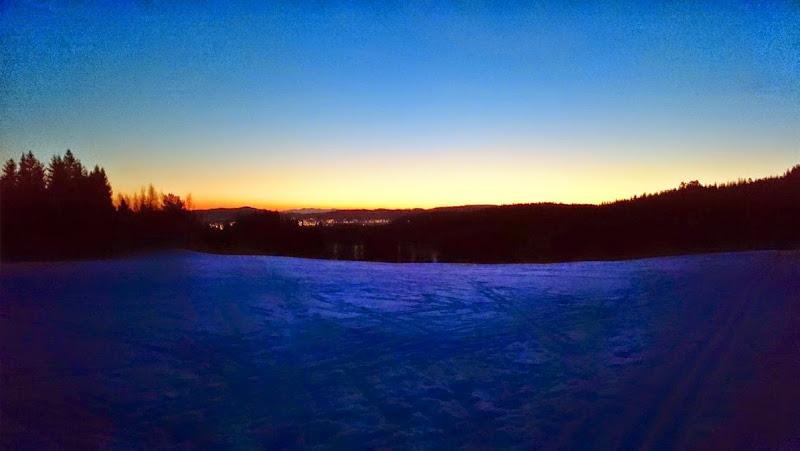 Sunrise above the city

Since I have workouts with specific pace goals to hit, I’ve been running less in the forest lately. Also, the forest has become a horrid mixtures of ice, wet snow and mud as spring sets in. I dream about dry trails to run!

I never envisioned myself a road runner, but it is fun to feel fast, which one does when transitioning from running on snow to running on roads. 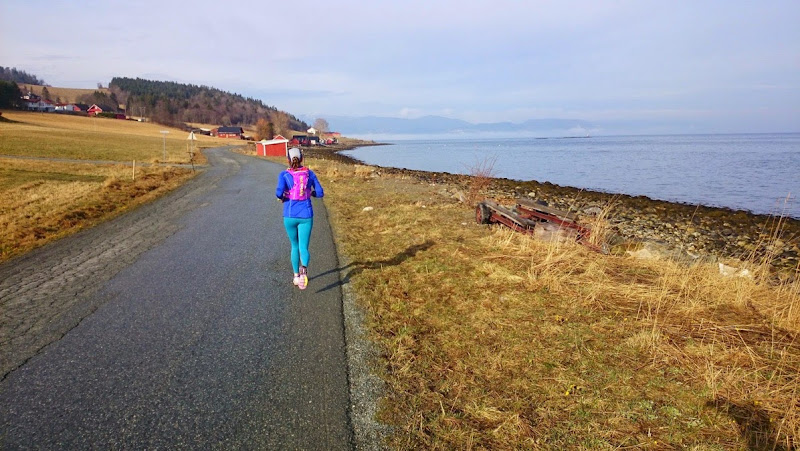 Road running by the coast at Byneset, one beautiful Saturday. 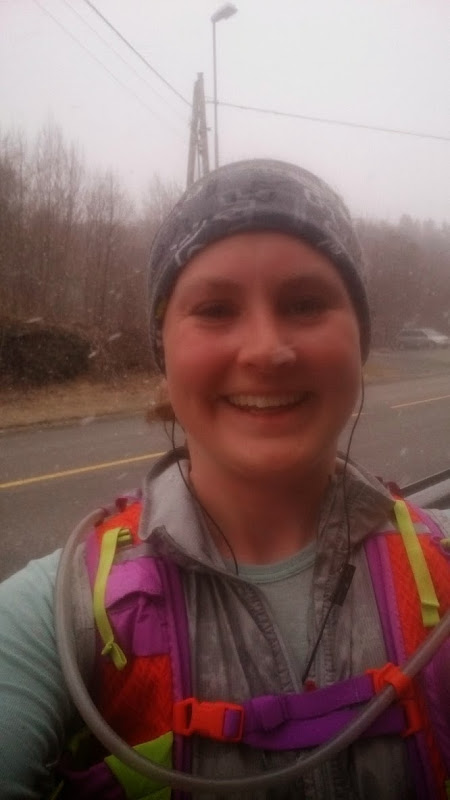 The spring in Norway can be pretty heinous, here exemplified by wet snow on a long run. 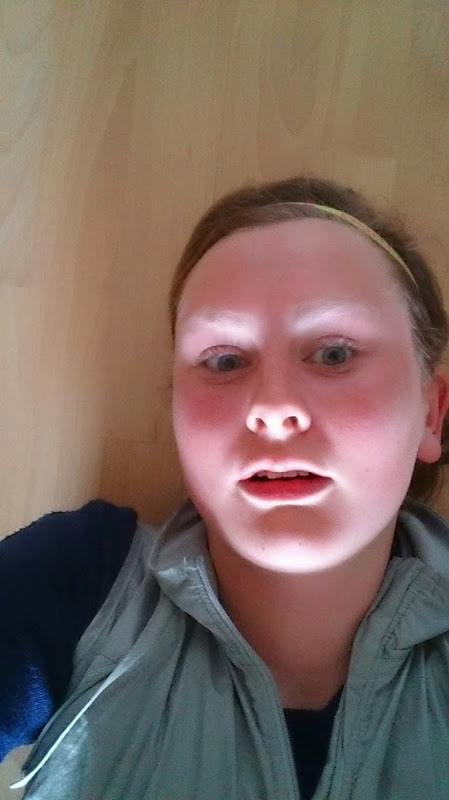 I’ll just be here, on the floor, until someone comes and scrapes me off.

I am constantly afraid of being injured, having read so many horror stories about runners put out of play for a year or more. So I jump at every niggle (and there have been a few, especially in the tendons around my calves and feet), and would rather take one rest day too many if that will allow my body to fly, far and free, across the forests of Norway and Sweden.

With only 8 weeks to go to Nordmarka Forest Marathon, I feel ready to decimate my previous time. I’m just going to put in a couple more days of ski touring first!