Easter part 3: Do it again

This is the third and final post about my Easter trip this year. If you haven’t already, check out the first and second.

On Thursday, we drove from Sogndal to Sunnmøre, hoping we could get in a ski trip in the spiky Sunnmøre Alps. It snowed like crazy during the 3 hour drive to Standalshytta. Standalshytta, a bustling ski hut, was full to the brim of Norwegians, Austrians and French, and we were forced into the shabbier old hut. But with hot food and a sauna, we couldn’t complain and we sat scheming about the next day.

The mountains were only intermittently peaking out of the clouds the next morning, and with all the new snow we evaluated the avalanche risk as higher than we were comfortable with. So we decided to do a day at Strandafjellet Ski Resort. This resulted in another hour and half of driving, and we weren’t exactly the first people in the lift line. It seemed like most of the people in the region had decided that Strandafjellet was the place to be. It was decidedly crowded, and I was decidedly tired. It was one of those days were turning my skis felt more like work than fun. 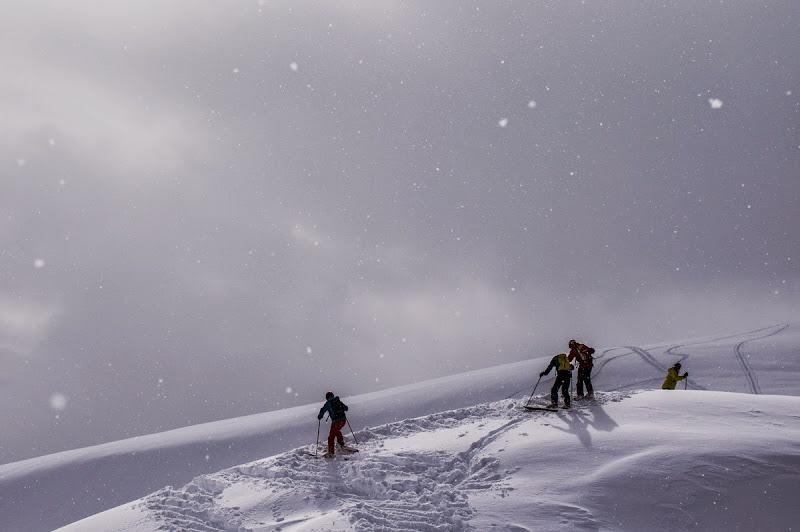 Side stepping up to the pow. Photo by Zoe

Being the powder hounds that we are, we were quickly searching outside the beaten sidecountry for fresh tracks. One such expedition lead us up a ridge at the far end of the resort. While everyone else sidestepped or booted up the hill, I quickly pulled out my climbing skins and charged passed them, wanting to prove that I could be first to the top. Because as I say, always bring skins! 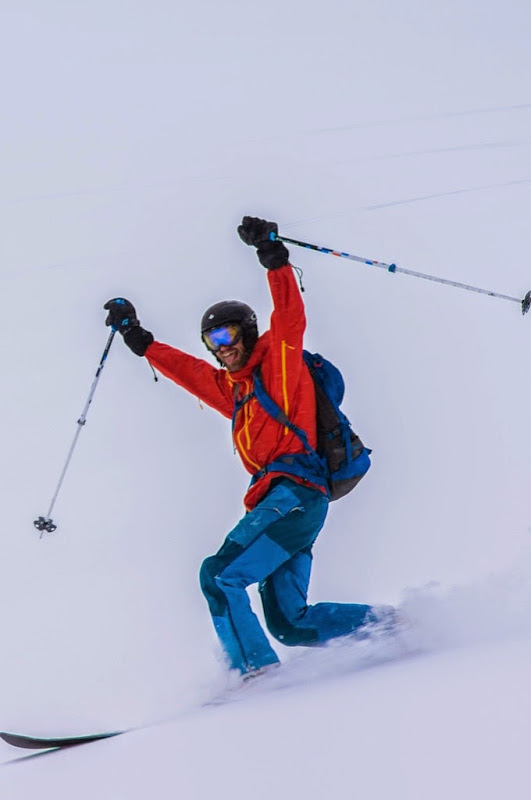 Audun, stoked after a sweet run. Photo by Zoe

Everyone was tired, and it ended up being a short day of skiing, especially as the mounds of new snow grew heavy and sticky in the sunlight. Then the gang split up; Sigmund, Andreas and Kenny headed to their respective families further north along the coast and we headed to Audun’s grandmothers house in Sunnmøre.

The next day, I whimped out and took a rest day. The story of skiing Tuva, therefore, will be told in the words of my sister, Zoe.

Easter Eve dawned sunny and beautiful. The giant blisters I’d accumulated throughout the course of the week were still there and still somewhat sore, but less so, and no longer feeling infected. It had been snowing the night before, and a good dusting of fluffy new snow was on the ground. Was I psyched to go skiing? Oh yes I was.

After a hearty breakfast, Molly, Audun, Odd Arild (Audun’s dad) and I geared up and headed for the car. As we started loading gear, Molly dropped her boots.

“My legs feel tired just from walking up the hill to the car,” she said, “I think I have to take a rest day today.”

I briefly considered sitting the day out as well. We had been skiing every day, for six days straight; my legs could probably use a rest. But I’d had a short day on Thursday, the sun was shining, and my feet were feeling as good as they had all week. Besides, the peak we had planned for the day, Tuva, didn’t sound particularly challenging, and I’m always the slowpoke going up anyway. Molly handed over her bottle of sunscreen and headed back to the house. We finished loading gear and drove up the road a ways, Audun and Odd Arild pointing out landmarks and telling stories on the way. 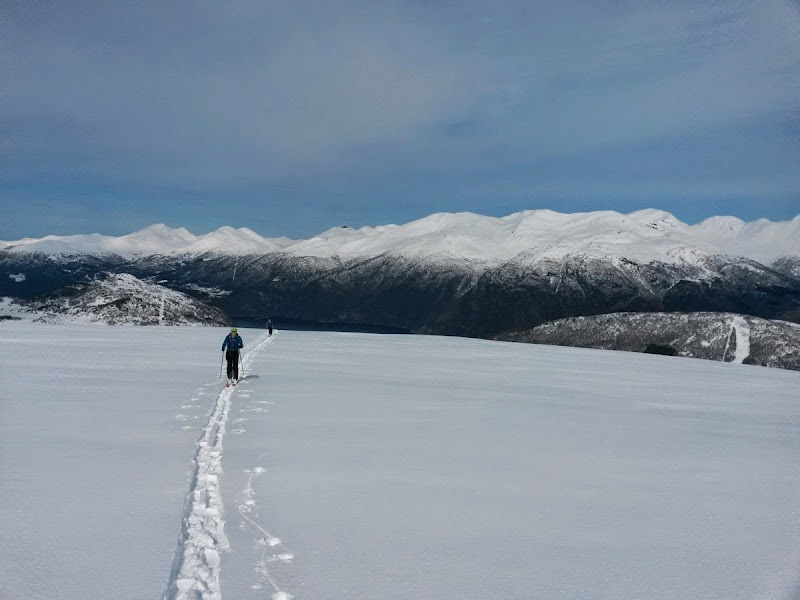 Odd Arild and Zoe on the climb. Photo by Audun

Our uphill ski route took us down a hill and across a small field on a groomed ski trail before we started our climb onto the ridge, so we waited to put skins on until we were at the base of the climb. The sun was shining, but the air was cold, and the new snow was light, fluffy, and 20-30 cm deep. Audun broke trail up a wide clearcut area up the ridge. It gradually became steeper, and he stopped to check the angle of the slope, finding it to be around 33º.

“Do you wanna dig a snow profile?” he asked. Despite the new snow and exposed slope, the conditions seem fairly stable to me, but I’m always curious to see what the snow pack looks like, so we got out our shovels and start digging. Odd Arild looked on, and I explained what we’re doing and seeing as we feel for weak layers in the snow and do a CT-test. The conditions were more or less what I thought, with all of the fluffy new snow sloughing off before the weak layer breaks, and only when Audun hit the block with a significant amount of force (we had a CT-28, for you avalanche nerds). We continued on our merry way, heading into the trees as the slope becomes steeper. Audun stopped a few times to inspect some confusing bird tracks, and Odd Arild regaled me with stories of ski trips and shenanigans in the area. We had a brief standing lunch break towards the top of the ridge, and somebody pointed out the huge halo around the sun.

“I guess it’ll snow tonight!” (Spoiler alert: it did.) 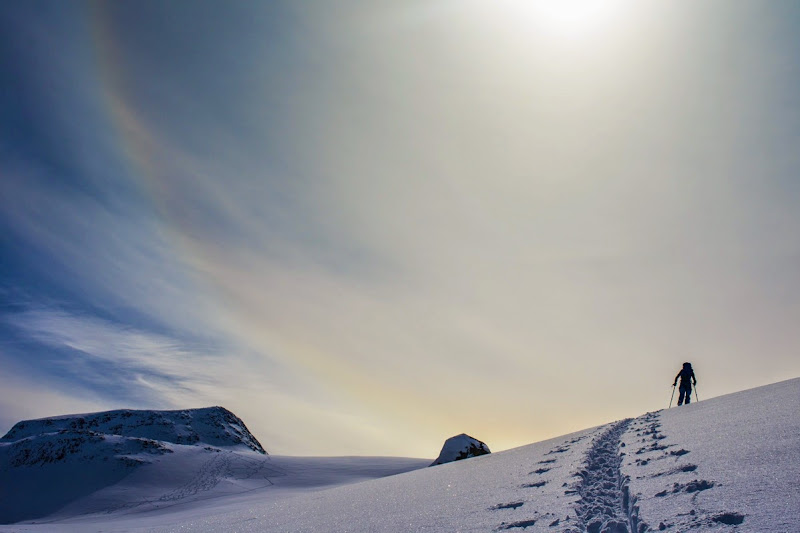 Halo around the sun. Photo by Zoe

We continued moving upward. I was really starting to feel the the past week in my legs, and the boys dropped me as we follow the ridgeline towards the high point of the day (not technically the top of the mountain, as this required more scrambling than we were willing to do in ski boots).

There were a few other people on the way up, most of them appearing to have started at the seter a little ways down the road from where our car was parked. Odd Arild stopped at a cairn on the ridge just before it got significantly steeper for a coffee break. 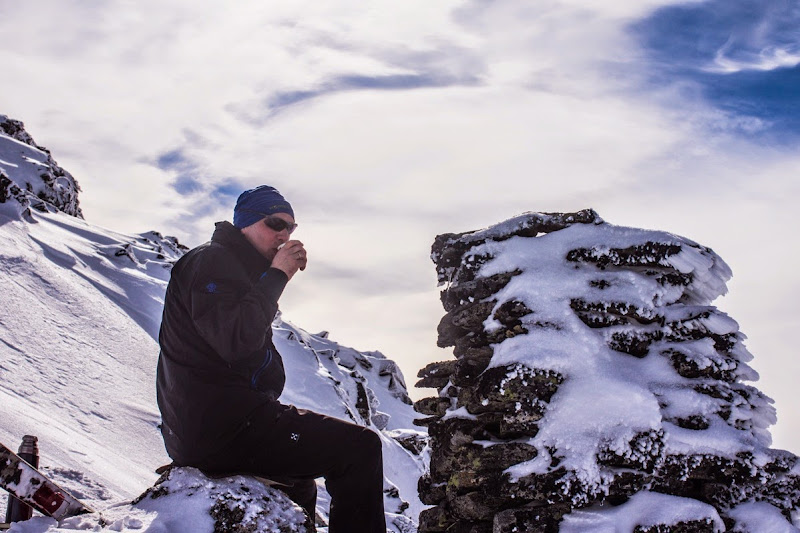 Audun took off his skis and booted his way to a higher point along the ridge, before the scrambling started in earnest. I stopped at the cairn with Odd Arild, ate some chocolate and started prepping to head down, chatting with two guys who’ve apparently driven ATVs at least part of the way up. The snow was light and fluffy as we set our first downhill turns, but the line we followed was pretty flat so we mostly just straight lined through the loose snow.

As Odd Arild continued to follow the main line of descent line into the trees, and Audun and I skied out to the side, to get a few turns in down a large open slope. Audun found a kicker get some air off of at the top, but I couldn’t muster the same enthusiasm with the past week heavy in my legs. We skied through the trees to a little seter where a bunch of people were lounging outside, enjoying the sun. Unsurprisingly (this is a small village!), they knew Odd Arild and Audun, who stopped to chat. I stood in the background and look clueless, definitely not a local. Somebody had a small fire burning, and some kids had built a tiny ski jump. One of the kids asked us if we’re going to jump off of the ski jump, so we did, Audun just barely getting enough air to land a 360.

We continued our descent on groomed ski trails. Eventually, we headed into the trees to get back to Nystad (Audun’s grandmother’s farmhouse), and Audun found a steep-looking line of pillows through the trees heading down in the right direction. I considered following him, but given my tired legs, the fact that I can’t keep up with him anyway and that I have no idea where I am, I choose to follow Odd Arild across the marsh instead. We picked up ski tracks through the trees from the day before, arriving back at the house to find Molly smugly lounging in the sun. Wild Bazilchuk my foot! 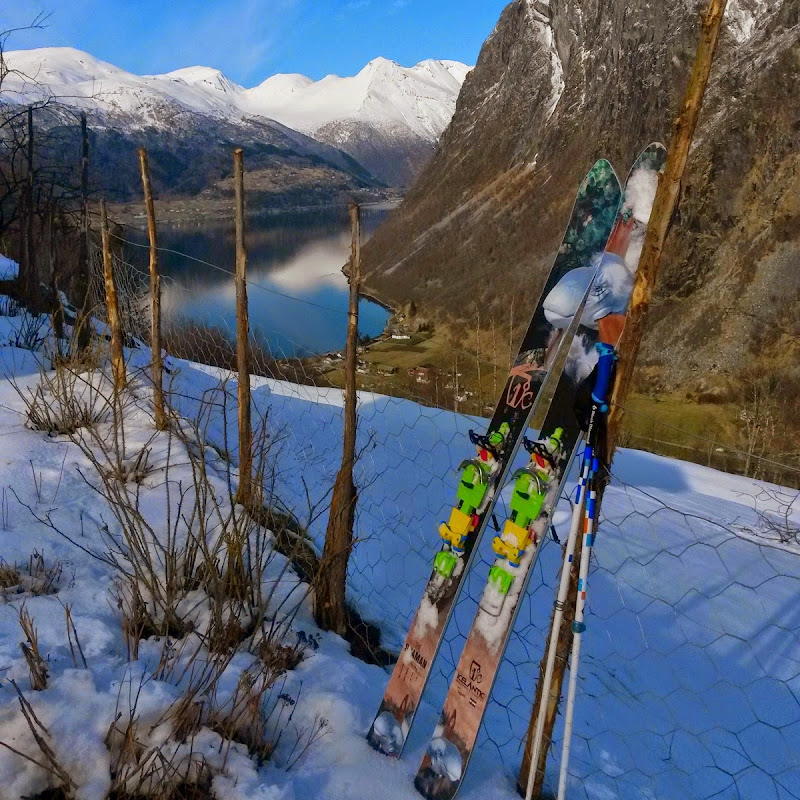 After ski with a view at Nystad, Norddal. Photo by Audun

The next day was foggy and rainy, so we took another rest day, getting out for a quick jog in Tingvoll. The day after was the last day of Easter vacation (Monday), and I was chaffing at the bit to get in one final mountain before heading back to Trondheim. We settled on Ytre Sula, a peak that I’ve often gazed upon from while waiting for the ferry at Kvanne.
It was already many degree above freezing when we clicked into our skis, and the snow was slushy. The weather forecast had been ambiguous, but the sun was out and there were only a few clouds in sight. 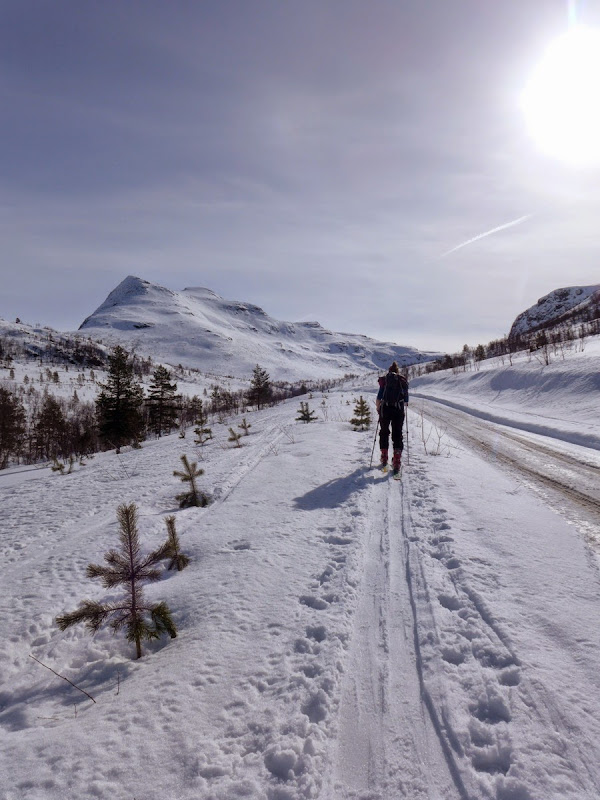 Zoe and our goal for the day, Ytre Sula
Following old tracks, we took a circuitous route around the mountain to take the gentlest slopes to the top. More clouds appeared, but stayed high in the sky, creating dramatic light over the surrounding peaks of Trollheimen. 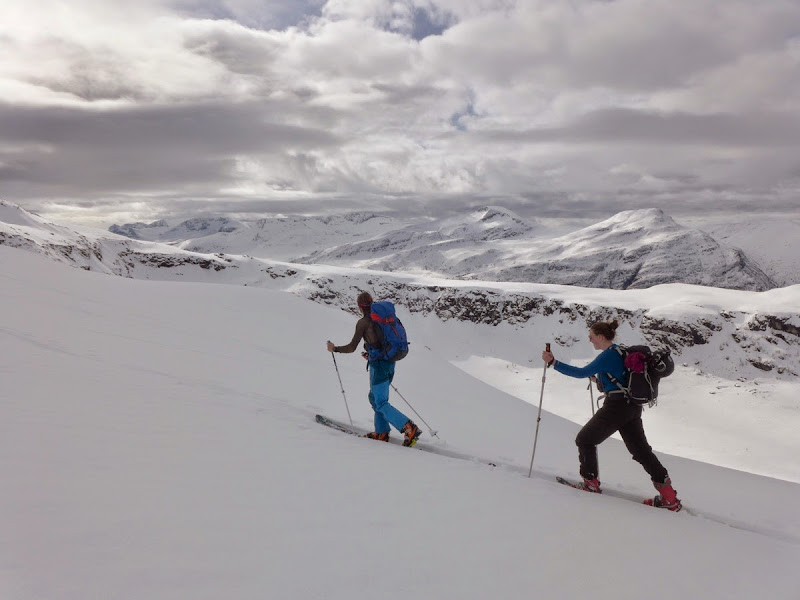 Audun and Zoe take in the mountains across Todalsfjorden.
Soon we were on the summit slope, taking in the stark contrast of snowy white mountains extending down to the deep dark fjord. 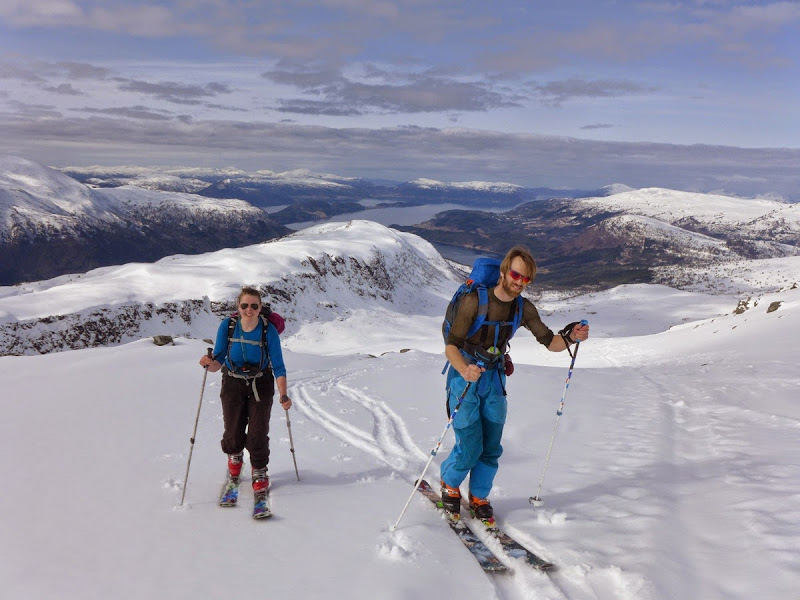 I <3 skiing in Norway
The wind whistled around the summit cairn. Audun took a short walk out on the ridge towards Indre (Inner) Sula, and soon became a tiny orange speck in a big, black-and-white landscape. 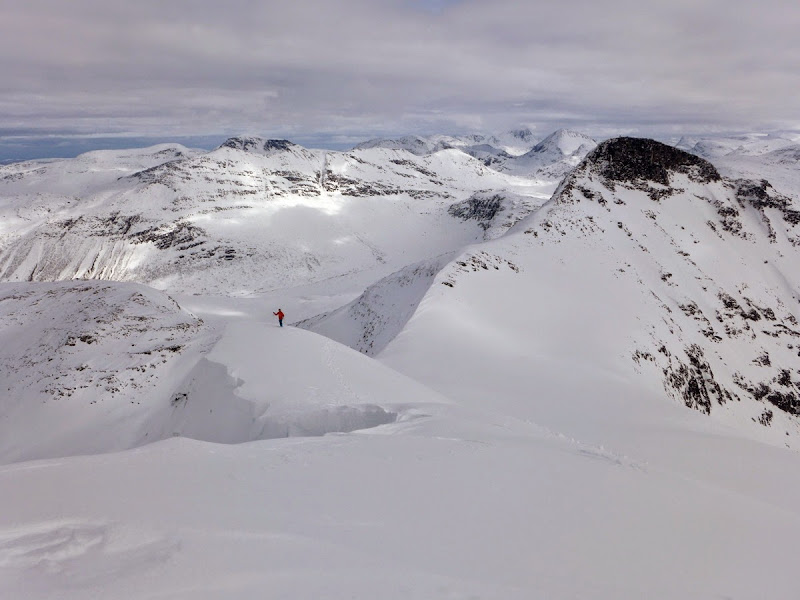 Audun on the ridge between Indre and Ytre Sula.
The snow on the way down was unfortunately a bit too slushy, unsurprisingly given the heat of the day. The slope down from Ytre Sula is grea for skiing, a big area to carve turns into with steeper pitches to keep it interesting. I would give a lot to be there on a powder day! 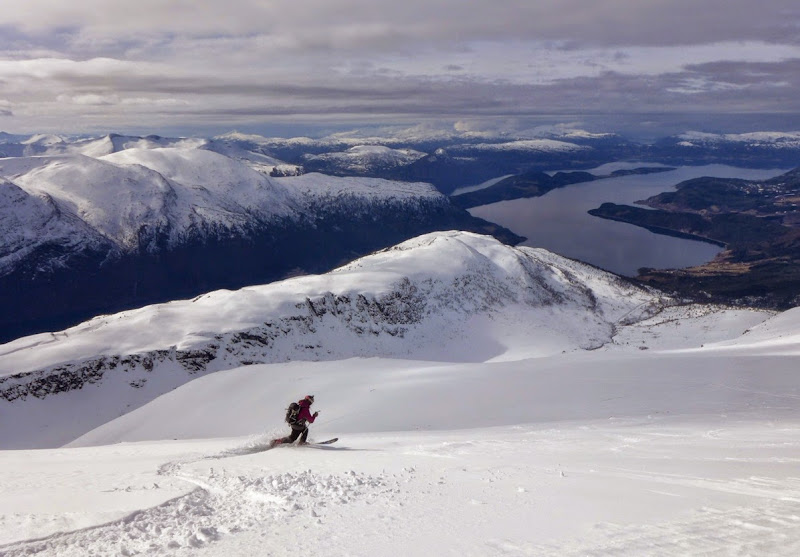 Zoe frees her heel on the summit slope of Ytre Sula
I managed to create a small, slushy avalanche on the steepest pitch. It was maybe 10 meters wide and slide around 50 meters, so nothing serious. Luckily I had had the presence of mind to tell Audun to traverse out from under me before I skied that pitch. At the same time, it’s a reminder to take care - had the slope been a tad bit steeper, or continued as steeply for longer, the avalanche might have accelerated more. 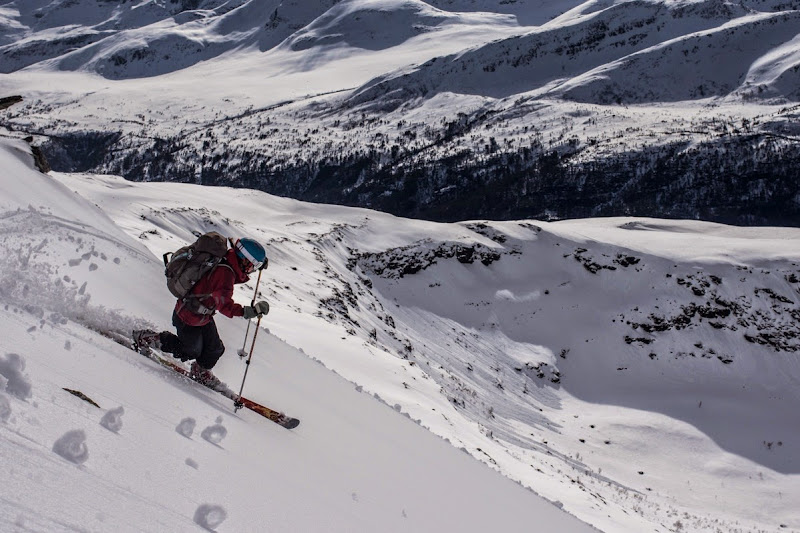 Me making one good turn, just before the snow started rolling. Photo by Zoe
It was an Easter of fair weather and good ski conditions. Let’s just hope we are just as lucky when we return to Tromsø (and Lyngen) next week!
- The Wild Bazilchuk
Labels: adventure avalanche bluebird norway pow skiing snow sunnmøre