This is part two in my series about ski touring during Easter vacation. Read part 1 here.

Our friends Sigmund, Andreas and Ken Roger arrived Monday evening, stoked off a long day of touring 1800 vertical meters of Skålåtårnet. The snow, apparently, had been atrocious. Score for Sogndal! I thought. We were in the right place with the right conditions and the right weather - a combo that doesn’t often happen.

It took a long session of consulting maps and guidebooks to decide our goal for the next day. Not knowing the area very well, the shear number of possibilities was overwhelming. In the end, we settled one of the self-proclaimed classics, Frudalshesten. Due to the low avalanche danger and our suspicion that the snow would be better on the other side of the mountain, we decided to take a back route up the mountain. 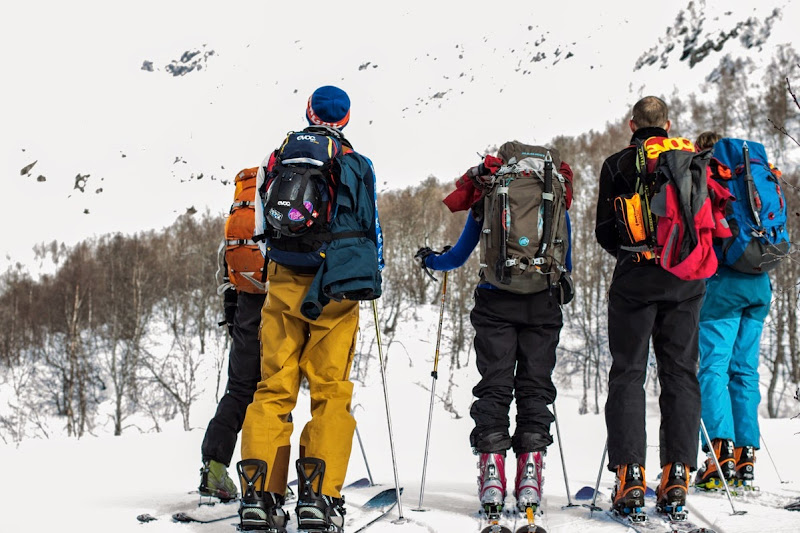 At the base of Frudalshesten. Photo by Zoe

There were a lot of cars at the parking lot, but luckily everyone headed for the main route up Frudalshesten. Our route (up Tverrelvdalen) had us first bushwacking through saplings, then traversing across a steep avalanche debris zone. 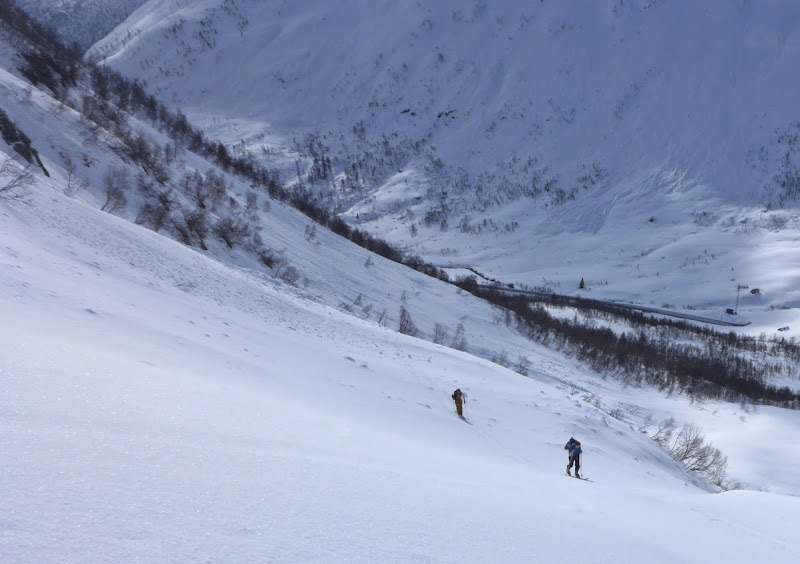 We spread out to cross the avalanche slope, although it was clear that the debris had fallen from above, and it was too early in day for more to come. Skinning alone made me feel apprehensive. I hate steep traverses. I tried to focus on the skin tracks in front of me, and not to look down to my side. Every time I did, I start to imagine sliding. Not good!

The top of this first steep pitch felt like the entrance to a hidden valley. We were alone in a untouched landscape of appealing snow. 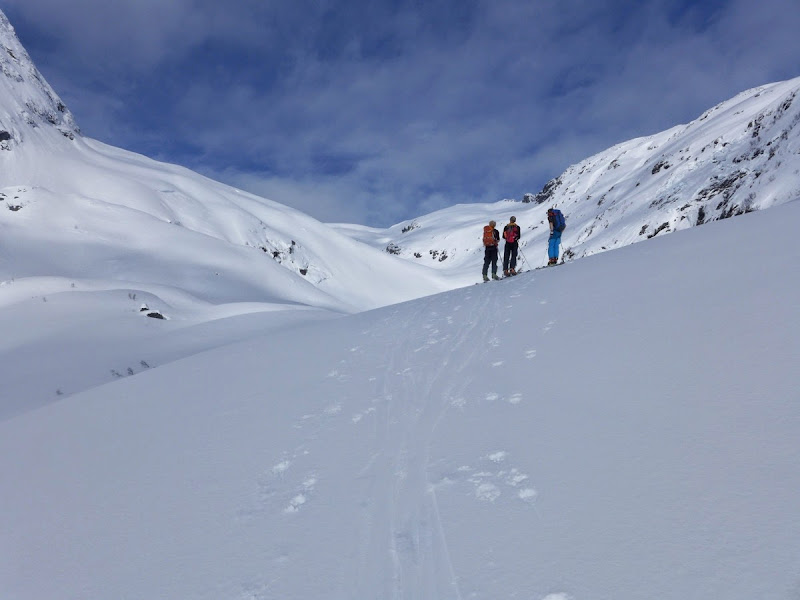 As we continued upward, the hidden valley transformed into a baking oven. The snow reflected the bright spring sunlight off all of the steep faces and onto to us. It was HOT! 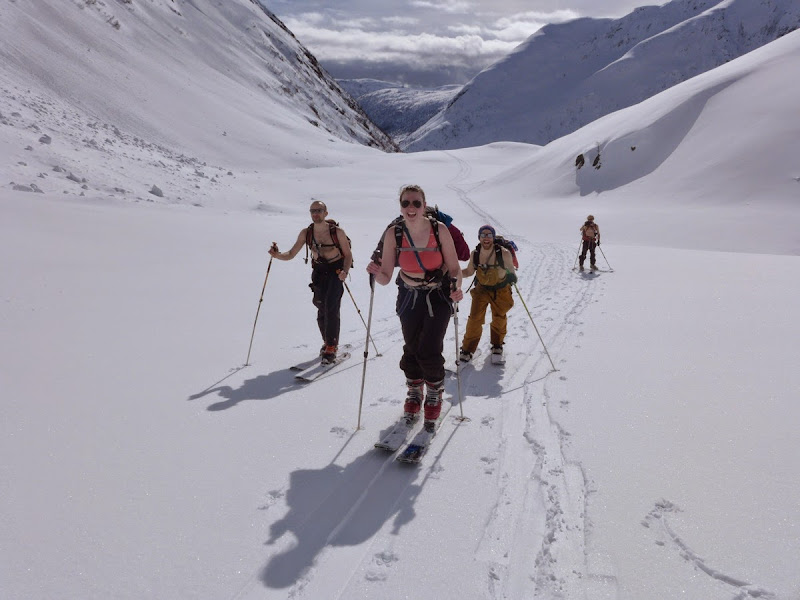 The large face below Frudalshesten offered numerous possibilities for descent. We scanned possible routes on the way up, until Sigmund found the perfect line. When he pointed it out, I got shivers down my spine. It was just steep enough to make me nervous and excited at the same time. And the snow was perfect, 15 cm of loose powder on a stable layer below.

It started clouding over as we approached the summit, and to our dismay a group of skiiers appeared above us. They had taken the normal route up - would they steal our perfect line on the way down? They hadn’t had the time we had to inspect possible lines, so they just followed our skin track up the least steep part of the face. HA! The perfect line would be ours on the way down. 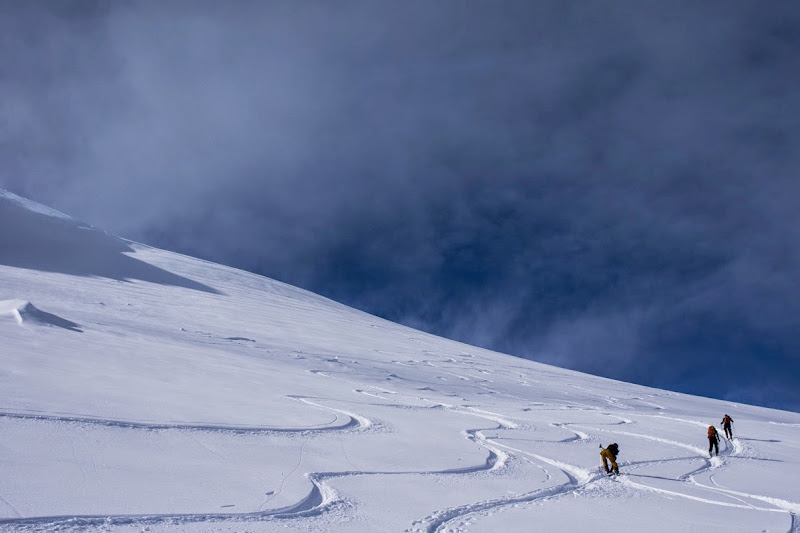 Climbing in the other skier’s tracks. Photo by Zoe.

There was a stiff breeze on the summit, so we changed quickly and headed down. Unfortunately, the light was really flat at this point, but the snow was good enough to have us whooping down the first section, until we reached the top of the steep gully formation that was our Perfect Line. 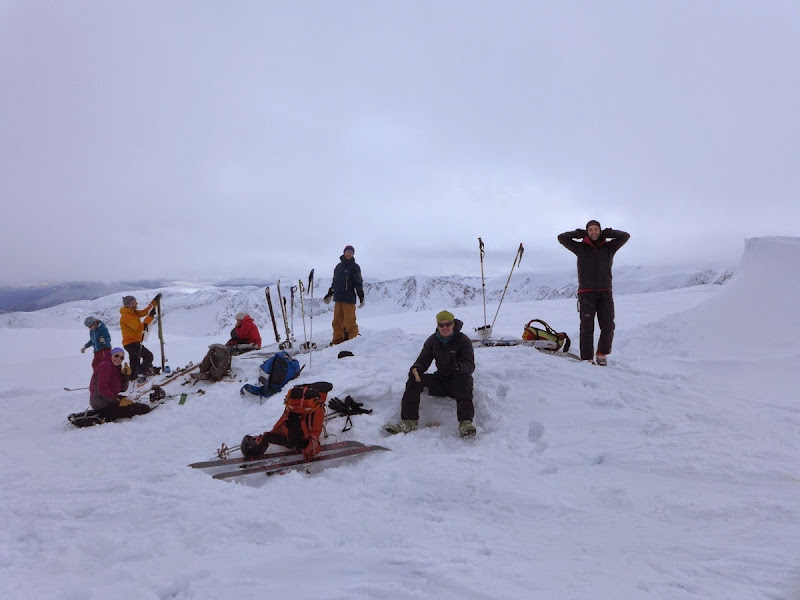 Audun went first, and reported back on his walkie-talkie: “I couldn’t see anything… I think it was pretty steep a the end though!” The rest of the boys went, one by one, and finally it was my turn. If Audun said it was pretty steep, it must be really steep, I thought, my stomach clenching. Even if the visibility wasn’t, the conditions were all one could ask for. I charged down the slope, feeling fabulous and following the other’s tracks. I kept wondering if there would be a cliff, if it would become scary steep. But it never did, and so I flew down the slow, exhilarated. 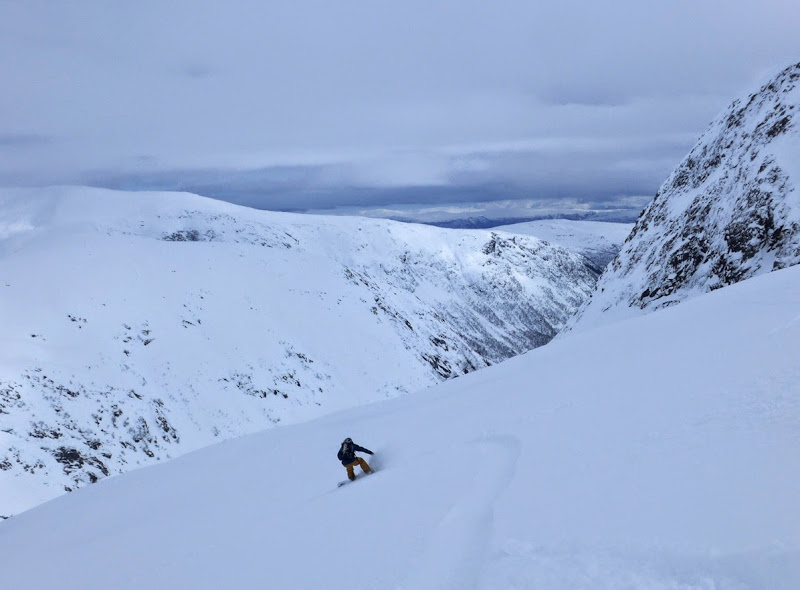 Kenny charging into the gully

We got backed to the campsite relatively early, and had time to swim in the fjord (yes, we don’t care how cold it is!) before making a gigantic burger supper. It was during this evening that the song Aggressive alpine skiing was introduced, and promptly became the theme song for whole trip. I would definitely recommend listening to this song as you read the rest of the post. 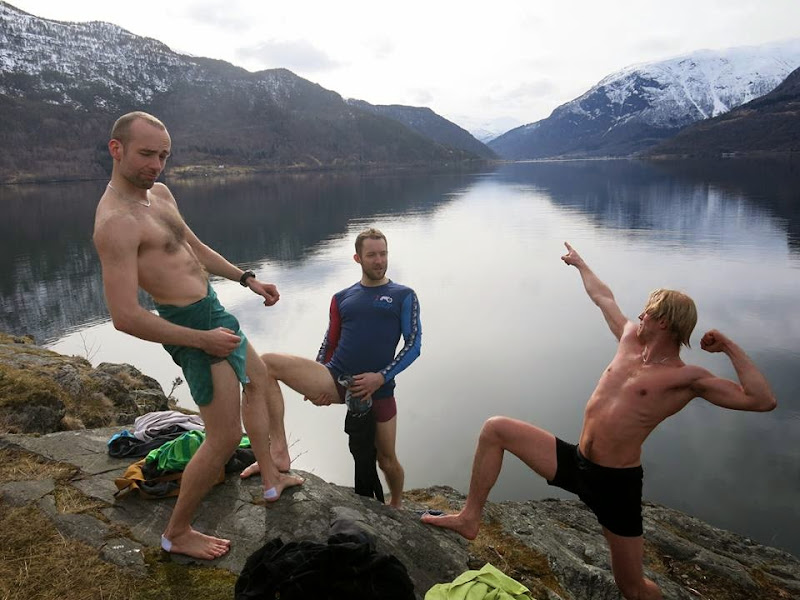 The next day, we decided to try one of the less famous peaks, Skjerdingane, in the same region as Frudalshesten. It was a grey day, but the weather forecast claimed that good weather was one the way. Ominously, we were the only car at the big parking lot, the same that had been full the day before. “Oh well,” we said to one another, “Guess nobody else read the weather forecast as carefully as we did." 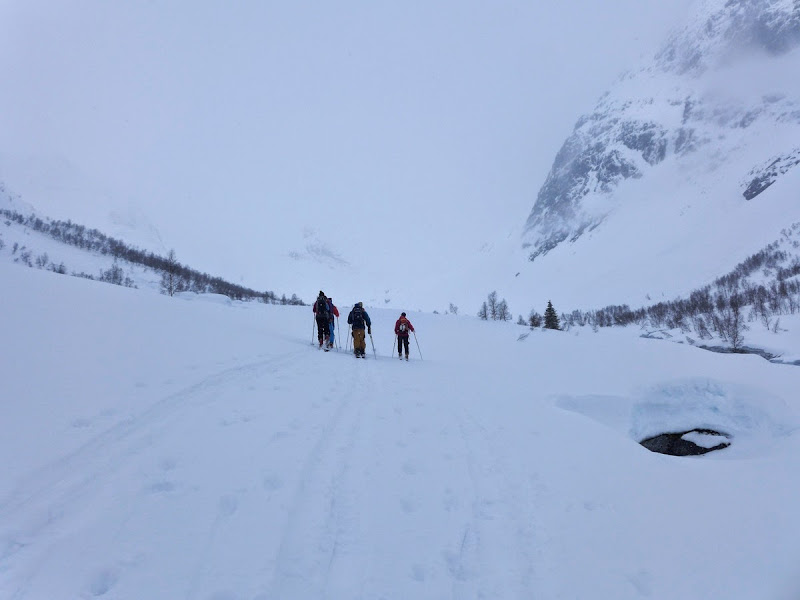 Skinning into Frudalen in so-so weather.

There was new snow on the ground and more in the air as we slogged up the gently valley. I caught glimpses of towering rock around us, but the tops of the peaks were shrouded in thick fog. It doesn’t look like this weather is going to pass, I thought, pulling on my hood and clinching it around my face. As we reached the first steep pitch up the mountain, I started to feel uncomfortable with the whole situation. After, we couldn’t see what was around us - what if the steep valley walls decided to avalanche?

The wind was blowing, slowly compacting the new snow into a loose, cohesive layer. This was a bad development in the avalanche danger situation. We stopped and I voiced my concerns. “Why don’t we go ski something in the trees, something where it doesn’t matter so much that there’s low visibility?"

Audun and Sigmund insisted that yr.no must be right, and that the weather would clear off any minute now. We waited, slurping hot drinks from our thermoses, and a gap in the clouds did form in the peaks above us, just giving a glimpse of the top of the mountain we aspired to climb. It was a beautiful, sharp peak, and seeing the top made me want to gain it. 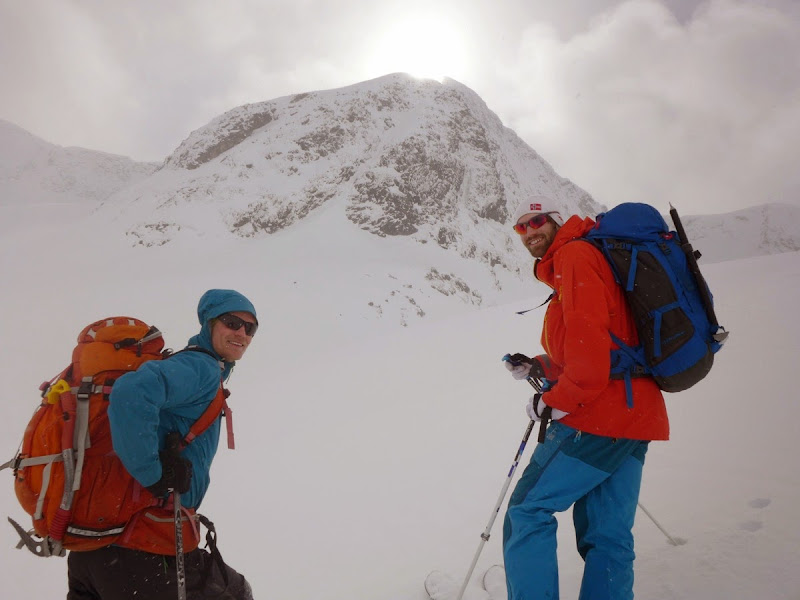 Sigmund and Audun below Skjerdingane

We continued climbing for a little ways, hoping it would clear off even more, but it never did. In the end, we decided the pitch to the summit ridge, which involved climbing at 40 degree couloir, looked too sketchy in the newly compacted snow conditions. We turned and got in a few good turns in all the new snow before a long session of double-poling to the car.

Undeterred (it was only 1pm!) we decided to ski up Togga again, and perhaps see if we could continue further along the summit ridge.

When we set out from the car, I lead the way, and I decided to see how long I could stay in front for. Sigmund especially had been climbing very fast, often leaving me slogging at the back of the pack. I just wanted to be in front for a little while; I wanted to feel fast. Something about my pace must have triggered Sigmund, though, because after a few minutes he shot past me like a rocket. Audun, ever competitive, soon ran after him as well. Well, boys, I thought, Guess I’ll try and join you. And I accelerated as much as one can do with well over 5 kilos of ski equipment on one’s legs.

I could not keep their pace. I went at the limit of my speed, hoping that I could at least keep them in the sight, but they were sprinting up the hill. Finally, gasping for breath, I gave up and sat down, defeated. Kenny, Andreas and Zoe came along and picked up my shattered pieces. Then we headed up the hill together, to where Sigmund and Audun were waiting, far ahead.

Above treeline, the wind pick up, and it became clear that we were on a divide between two weather fronts. On one side was sun and blue sky; on the other was fog and wind. I shot a panorama, trying to capture it:

We reached the first top of Togga and decided to turn, think that enough was enough with wind and bad weather. 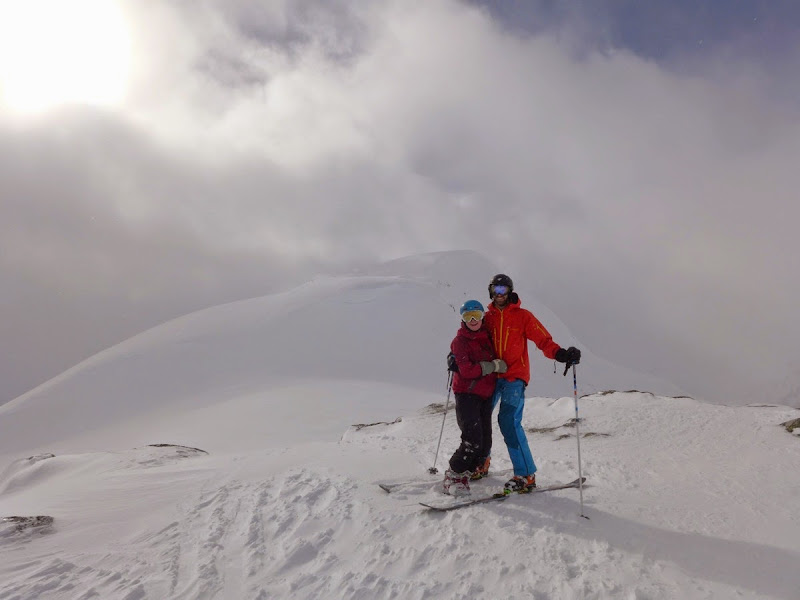 Audun and I on top of Togga.

The next day, the weather was much better, and we decided on Sogndalseggi, which gaves us the possibility to choose between 3 different tops. The ski started with a slog on cross-country trails into Anestølen. Shortly after, Zoe informed us that here blisters were too much and that she would go back to the car and relax. I kind of envied her; I was starting to get tired after 4 mountains in 4 days!

Although the sun was shining, there were intermittent clouds along the ridge of Sogndalseggi. As we later learned, the massif had formed another weather divide, with sun on the side we were climbing but bad weather on the other. We decided to shoot for the intermediate of the three possible tops, Sogndalseggi 1476 (referring to its height in meters of course).

We met one other group, headed down as we headed up, and I marvelled at how few people we had seen the last few days. Sogndal is this mecca of ski touring, so I had kind of expected crowds during Easter, especially with the big boom in ski touring in Norway during the last couple years. Whatever, more powder for me! 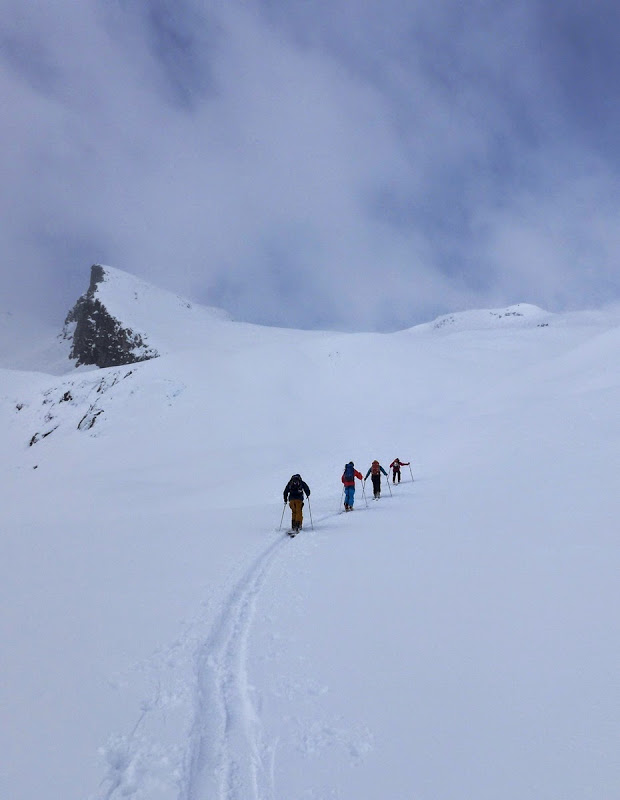 Kenny, Audun, Sigmund and Andreas on the climb. Our peak is behind the rocky outcropping to the left.

The climb to Sogndalseggi was long but uneventful, with exception of the final pitch to the top. The slope grew steep, and with all the new, heavy pow, we split up across the slope for safety. 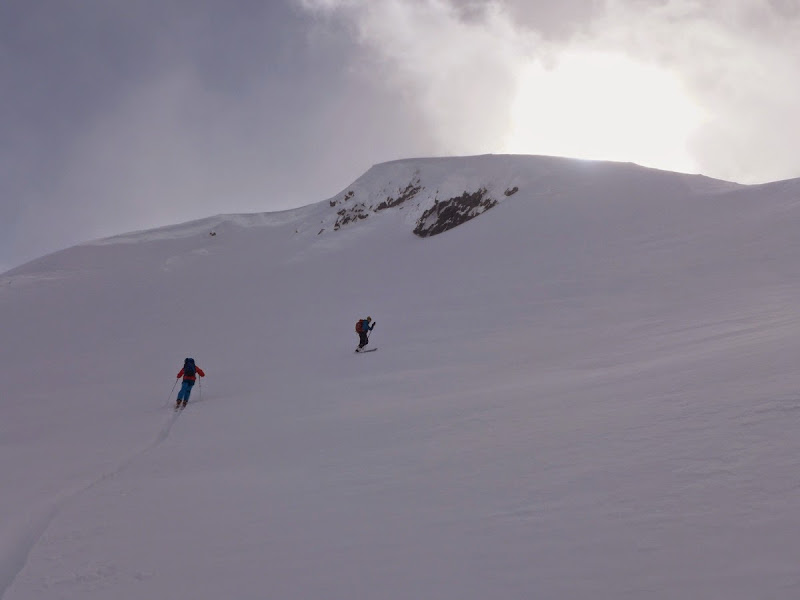 Audun and Sigmund, with the top just above them.

Sigmund was breaking tracks and he made it look hard, something he doesn’t usually do. There was a lot of new snow, and it was heavy! The slope was stable though, even if the trail breaking was hard. The wind was blowing hard enough to make conversation difficult on top, and we quickly peeled off our skins and put on our helmets. It was time for the main event. 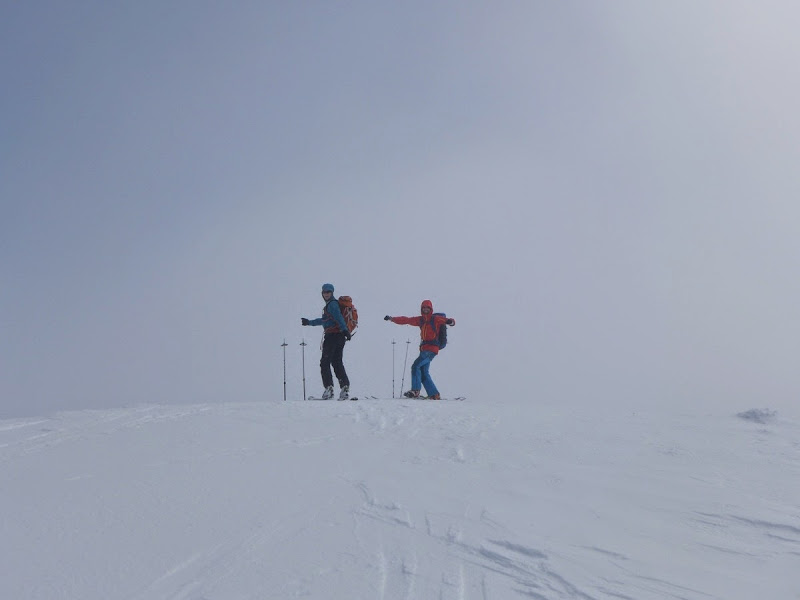 Sigmund and Audun on top. Not so much view.

The visibility on the ski down made it tricky, and unfortunately the snow, however plentiful, was not super forgiviing.. I got frustrated as I kept catching my back ski under the heavy snow and falling as though in slow motion. Others, however, had more fun: 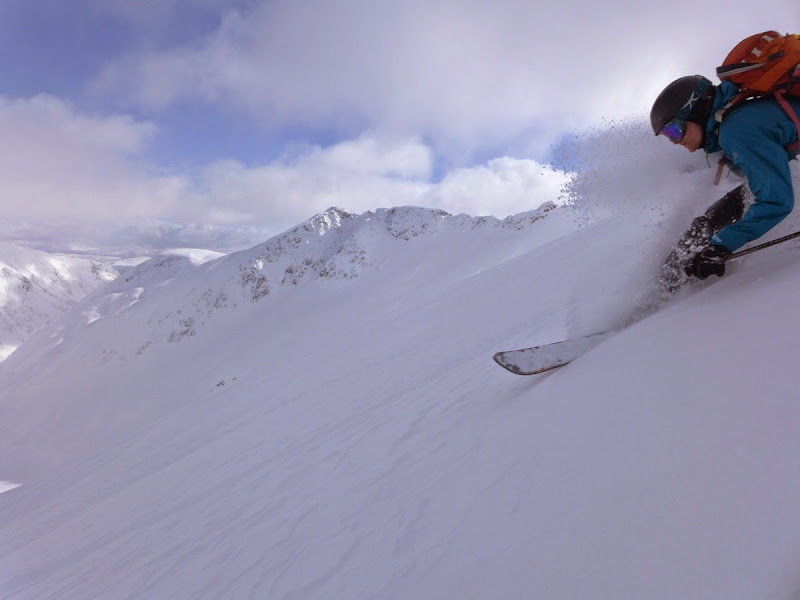 I’ll let Kenny’s video speak for the rest of this ski down. If you didn’t listen to Aggressive alpine skiing earlier, you can’t avoid it now!

With several amazing days in Sogndal, we headed north, towards Sunnmøre. But that’s story for another post!

P.S. For anyone planning a trip/for you map geeks out there, here’s a map with all the tours mention in this post drawn in: 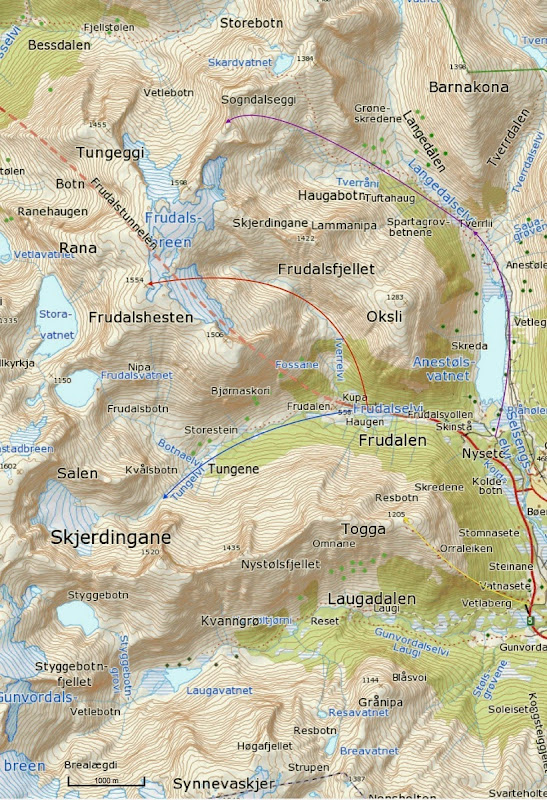