Easter part 1: This is awesome

As Zoe, Audun and I sat cross-legged eating our breakfasts outside the tents, the stoke was low. We had spent eight hours driving the day before, headed for the promise land of backcountry skiing: Sogndal. And here we were, quietly crunching müsli in a dismal drizzle. All I wanted to do was crawl back into my tent and wait for sunshine and pow.

But it was the second day Easter vacation, and the first had been spent in the car - it was time to ski. So we packed up the car and drove up to the mountains. Magically, only a few hundred vertical meters above Sogndal, the rain turned into snow, steadily driving into high snowbanks along the side of the road. Then the snow stopped, and the sky cleared. It felt like a omen of good things to come: there would be pow and sunshine a plenty for those who went to the mountains.

It was warm out and we quickly overheated as we climbed up the forested slope of Togga, sweating in our heavy plastic ski boots. 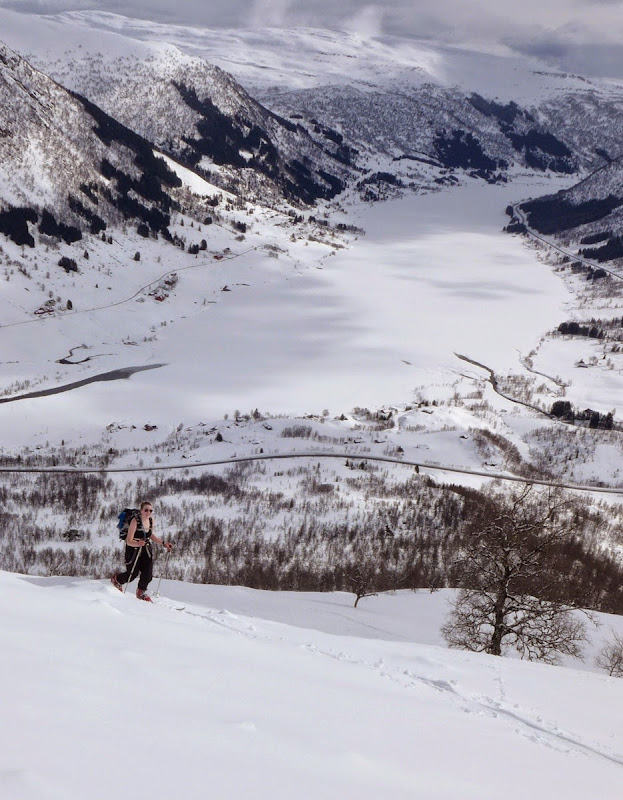 Togga is a relatively modest mountain compared to the surrounding peaks. The top at 1205 meters is really just the start of a ridgeline that arcs several hundred meters higher. I had a hard week of marathon training still heavy in my legs, and so I was glad that the top came so quickly. 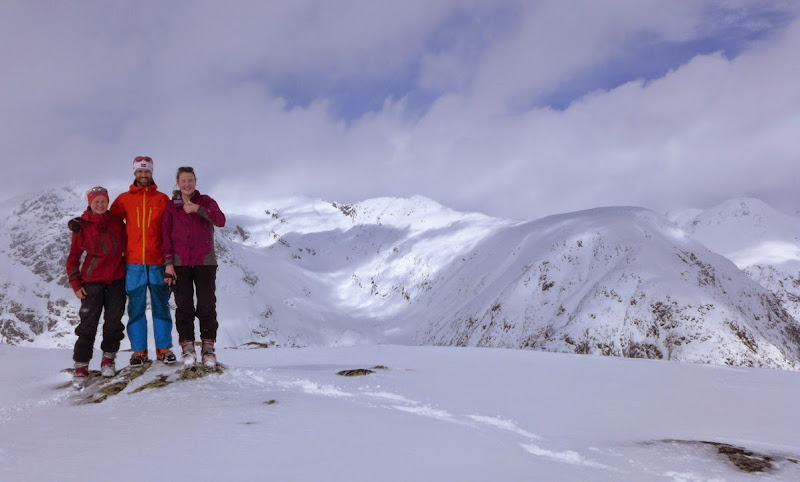 Me, Audun and Zoe on Togga

The ski down was as steep as the climb up, and there was good fun to be had in the slush through the forest. 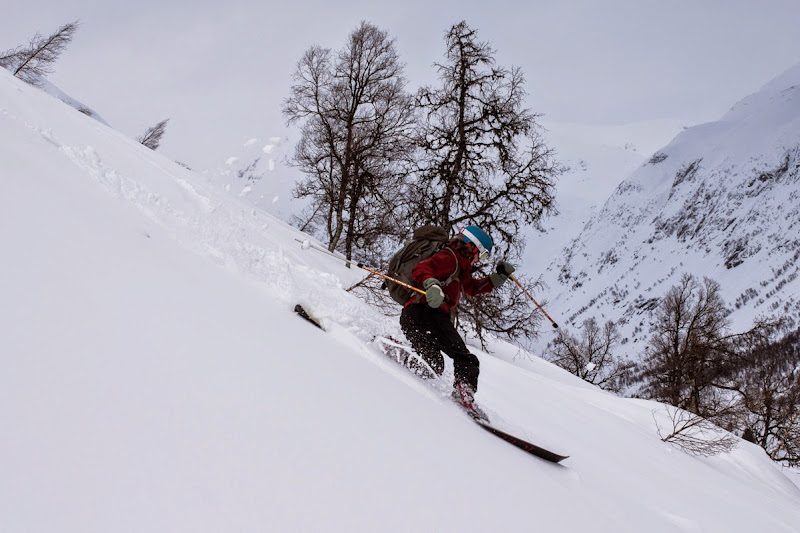 Photo by Zoe, awesome telemark style by me

The weather forecast for next day was better, and so we set our sights on a larger goal: Hest (which means Horse, although I didn’t see how the peak resemble a horse) in Jostedalen. We rendezvoused with another group of friends and set out into the bright, blue morning. 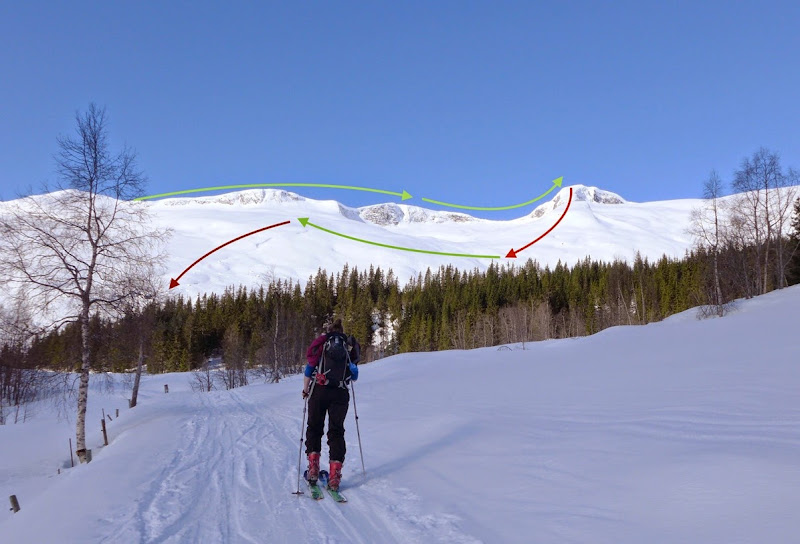 Zoe with the ridgeline of Hest in the background. I drew in the route we ended up taking. Green for climbing and red for descending.

Old ski tracks followed a summer road up to a large dam at the base of the mountain. The tracks were crusty and hardened from the night’s frost. I hoped that the sun would soften up the snow, or we were in for a rough ski down.

As we skinned up to treeline, I heard Audun and Øyvind talking about skiing straight down the steep-looking ridgeline from the top. The route was described in our guidebook as wind crusted during the winter, but a nice descent in the spring. At the end of March in Norway, it’s hard to tell whether a spring or winter description would likely apply. I hoped it would be the former.

Several members of our group were cross-country skiiers, and they sprinted up the hill like they were racing the Birkebeiner. Soon we were spread out up the slope, climbing in the increasingly dry and light snow. It was… dare I say… powder and sunshine again! 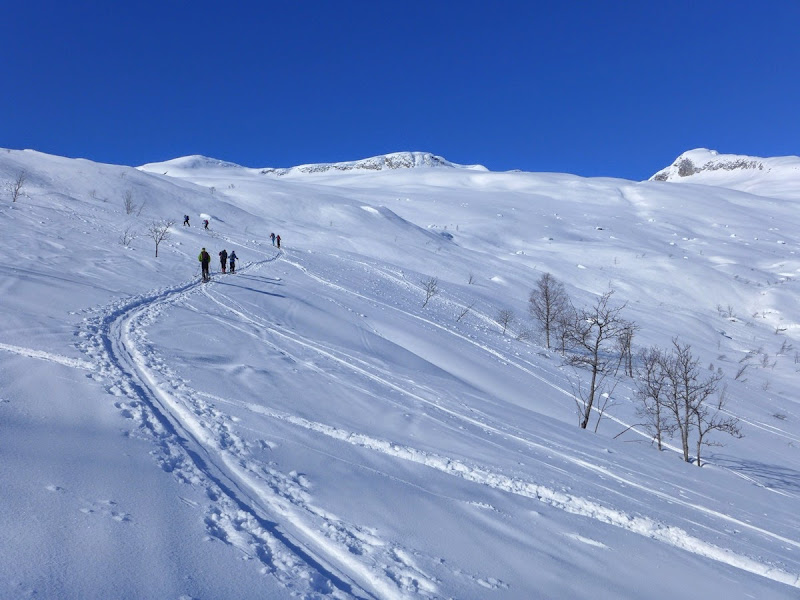 Climbing up to the saddle, the snow was already drier at treeline.

Just below the saddle leading to the main ridge up to Hest, we stopped to regroup. Zoe was lagging, and informed us that her ski boots, after several years of excellent service, had decided to give her blisters. Awesome! She and another guy, Kristoff, opted to head for the smaller top of Grøndalseggi, taking this incredible picture on the way: 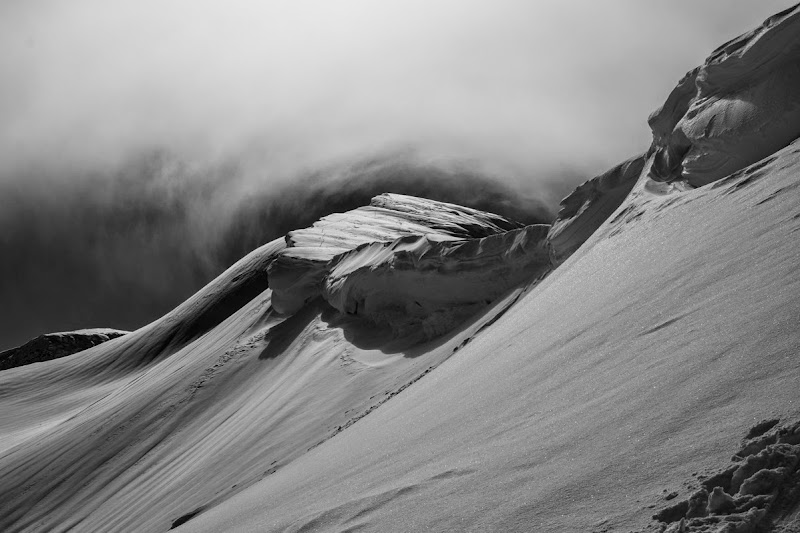 Cornice on Grøndalseggi, photo by Zoe

The rest of us slogged along the undulating ridge towards Hest i swirling mists. I couldn’t help but wonder if we would be able to see the slope straight off the top that we had purposed to ski. And would the snow be the same powder we had skinned up in, or the icy windpack we occasionally hit along the ridge? 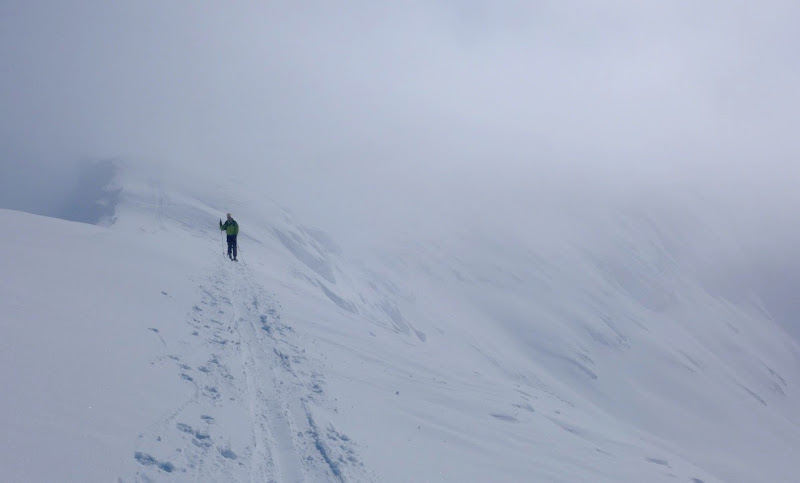 Eirik comes out of the mist

The last pitch to the top was very steep and slanting off into nothingness in the valley below. We put our skis on our backs, even though we met two women on the way down who had said that the visibility was too low to ski straight off the top. They had turned around for the long slog along the ridge. 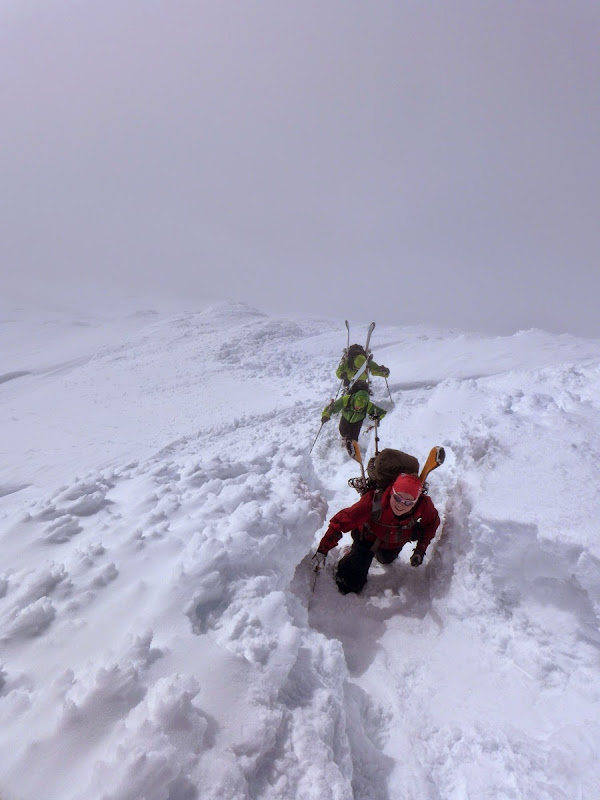 Booting it to the top of Hest. Don’t fall!

The snow on the last section was icy and loose, and it would be harder to get down that section safely than it was to climb up. I nervously hoped that the clouds would lift. We kept seeing gaps of sunlight in the clouds - the mist wasn’t that heavy!

When we reached the top, the clouds lifted just enough to tantalize us with the line straight down from the top, but not enough to see all the way down to the valley. It was unanimously decided that we would ski straight down from the top. The first section was broad, and I could arc big turns. But the ridge grew smaller, perhaps only 10 meters wide at one point, with a larger cornice on the left, forcing me to straight line as much as possible. Luckily, this was just a short section and the ridge was covered in really good, loose snow. 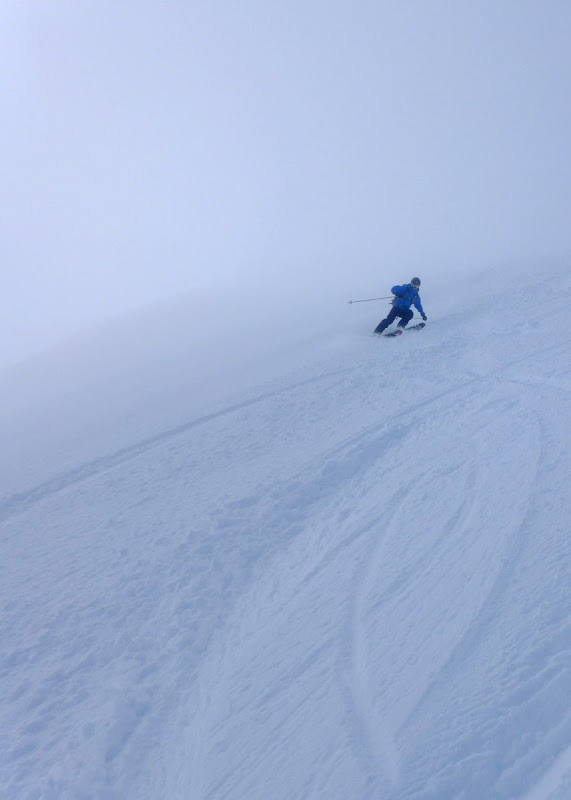 Øyvind comes out of the clouds off the top.

The clouds opened up as we descended and we were rewarded with sunshine and powder again. 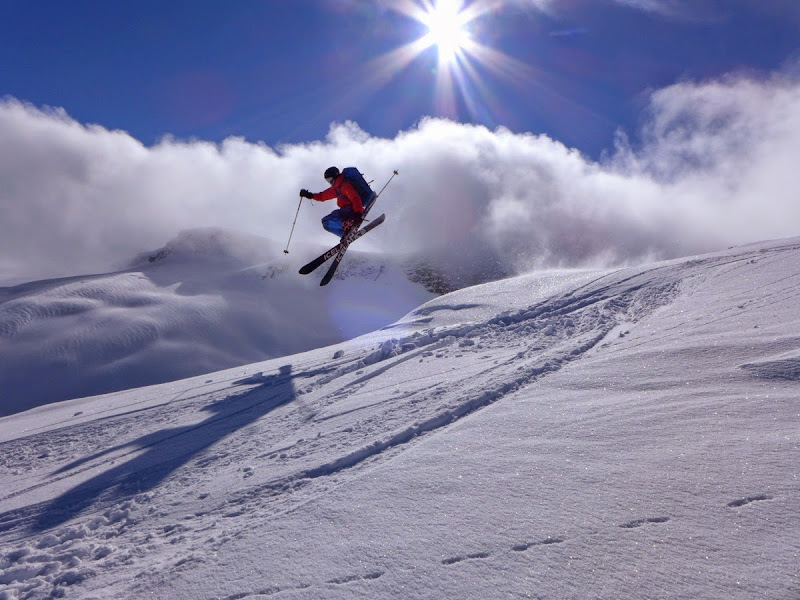 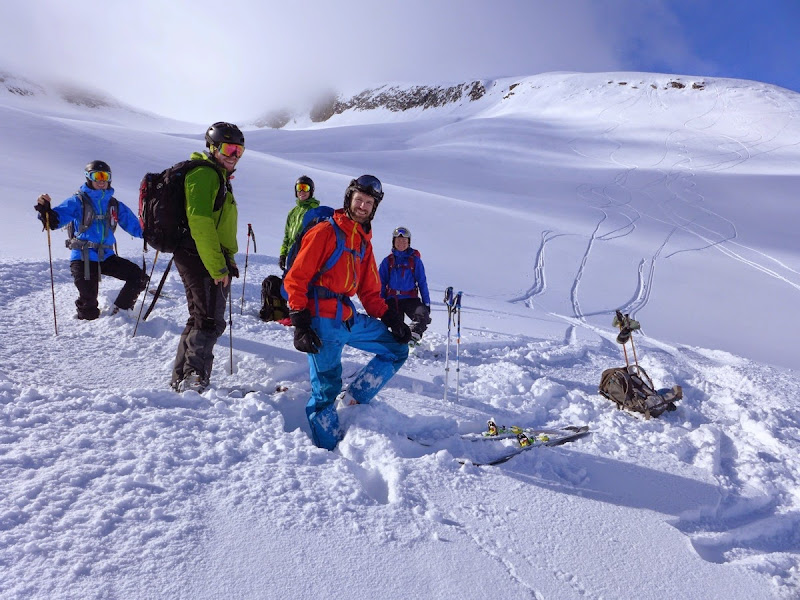 Looking back at our tracks. Stoked!

After the initial descent, we climbed back up to our uphill tracks to get even more turns in on this beautiful day. Could it be topped? We would see when my friends Sigmund, Andreas and Ken Roger (of this blog post) arrived...