The Proposal (The Philippines, part 2)

(Read part 1 of my trip to the Philippines here)

It was 4:45 am on my birthday, and a bobbing circle of wet trail was illuminated by the beam of my headlamp. Audun, our local guide Tony and I were hiking towards the ominously named Mt Purgatory traverse in the Cordilleras. Despite all of our hopes of improved weather today, it was drizzling. All of these factors combined may not sound like a set of an ideal birthday, but I was undeniably stoked to be out there, exploring this tiny, strange corner of the world.

After an hour or so we crested our first ‘peak’ of the day, Mt Mangagew. The Cordilleras are remote but inhabited, and Tony pointed out a tiny elementary school near the top of Mangagew. Every tiny town in the Cordilleras seems to have a school, which makes sense since they are so far from each other. 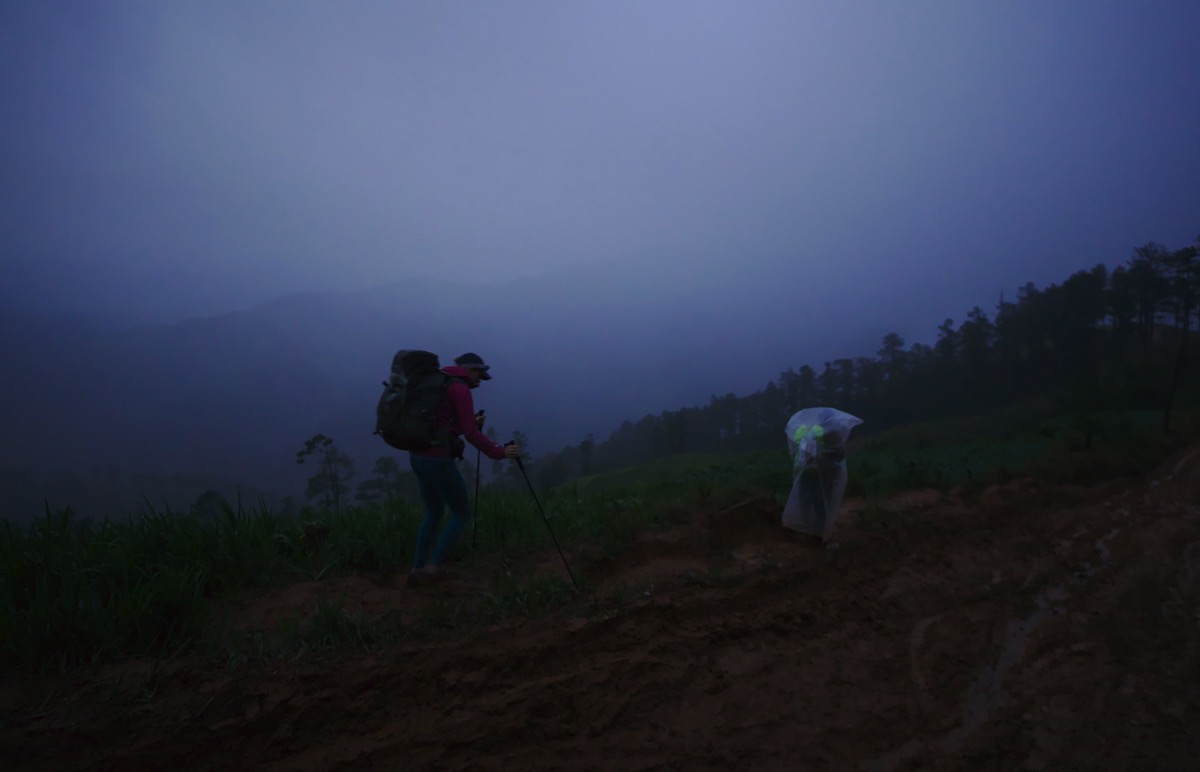 Hiking in towards Mt Purgatory in the predawn light.

After Mangagew, the path to Purgatory took us down an extremely muddy road. I couldn’t imagine a car getting anywhere in these conditions, when the peanut-butter like mud filled in every crevice in the tread of my running shoes and I fought for purchase with every step. Tony, covered in a see-through plastic bag and sporting practical rubber boots, floated like a ghost ahead of me, seeming never to slip. 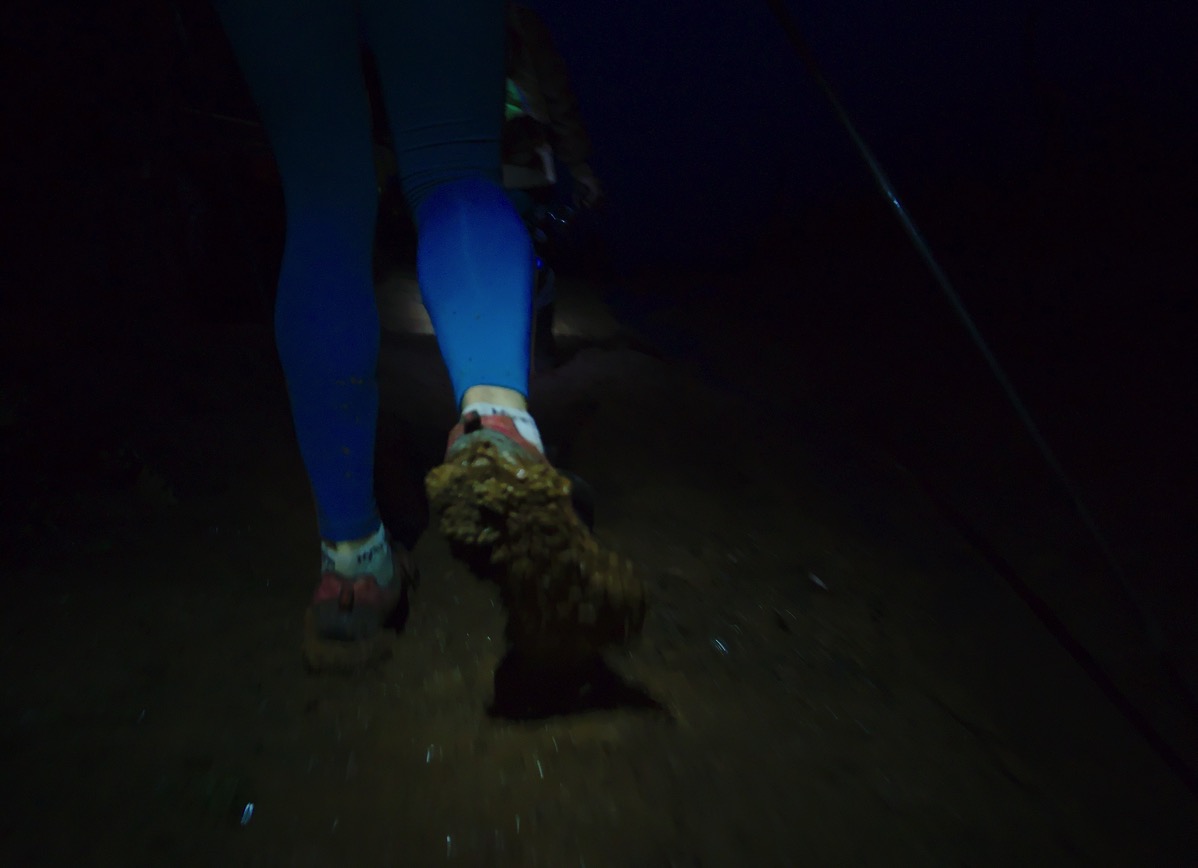 I was happy when dawn came, although the light didn’t improve the weather. The landscape was shrouded in clouds, and the rain continued. I guess early December is the rainy season in the Cordilleras despite the opposite impression I was given by my guidebook. The occasional guard dog barked as we passed by ramshackle farm buildings that bordered lush fields soaking up the rain. 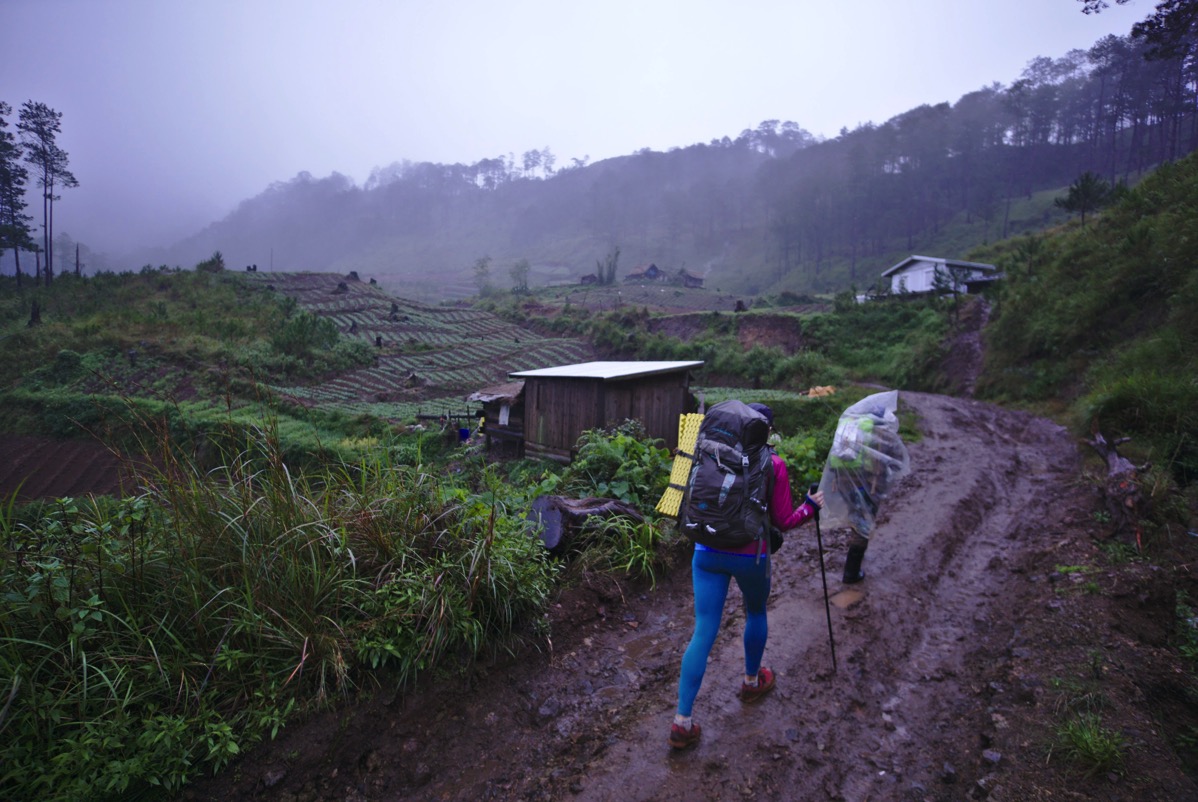 Dawn on the fields below Mt Pack.

Eventually we veered off the muddy road into a gravelly trail that provided much easier going. We were above the farmlands now, and soon entered what Tony called the ‘mossy forest’. I pity the people who tried to find their way over this range of mountains for the first time. The vegetation was extremely thick, and seemed to being doing its best to reclaim the trail. 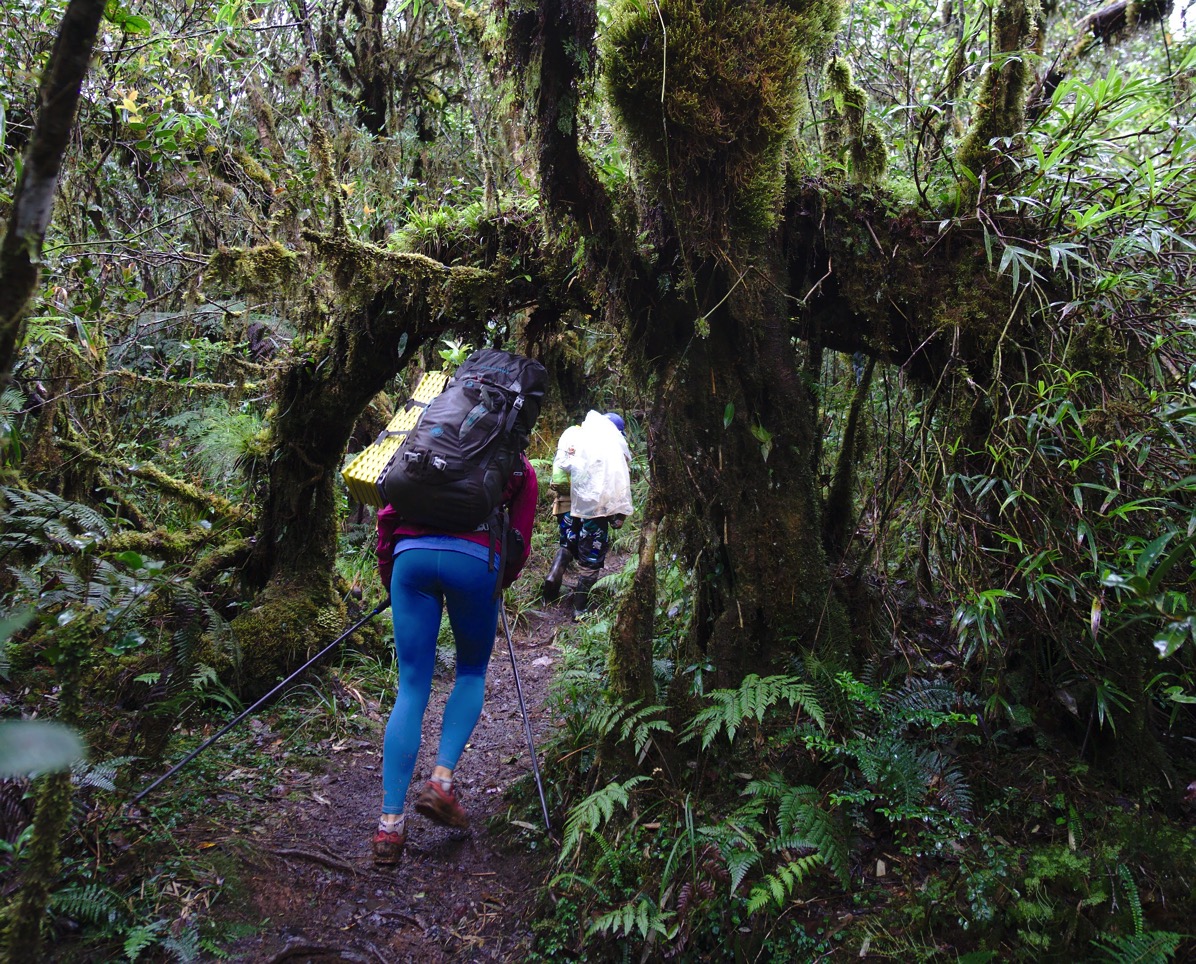 The mossy forest on Mt Pack.

A final steep climb brought us to the unassuming summit of Mt Pack, which was not much more than a sign post in a circular area of cleared forest. What must have been a viewpoint on a better day was a glimpse inside of the stomach of a cloud today. We stopped for snacks. It was still relatively early in the morning, but now hours since breakfast. Birthday candy bar, if not cake, I thought as I munched on a Snickers. 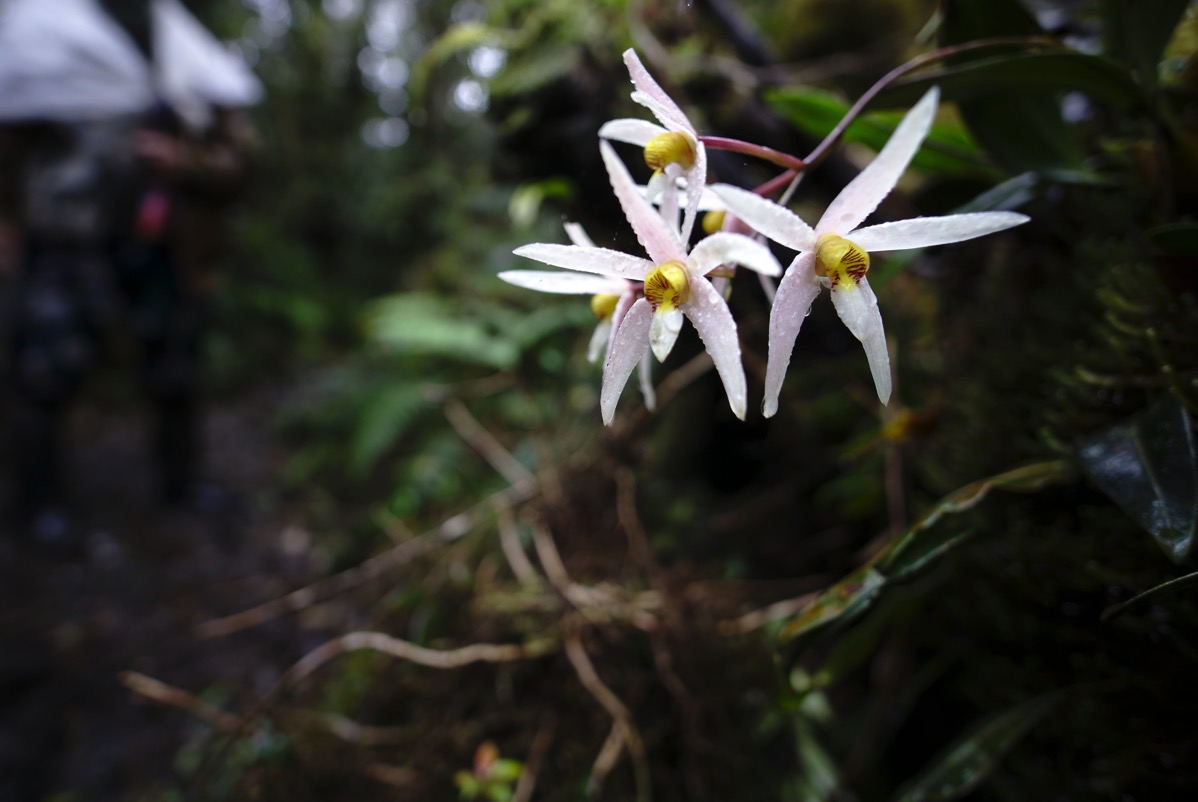 ‘Caution: slippery trail’ a trail signed warned, before the trail took a nosedive on wet roots. Usually adept on technical trail, I felt cumbersome with a heavily loaded backpack and was glad of my hiking poles to keep my balance. There was no longer any question of keeping my feet dry; the areas between the roots were filled with water so it was either get wet or slip.

“This is the wettest trail I’ve ever been on,” commented Audun. I tended to agree.

I was surprised when Tony informed us that were were on the ‘summit’ of Mt Purgatory. It seemed more like an open saddle point than the top of anything. Tony spoke with someone on his walky-talky, and I could detect a hint of surprise in the voice coming out of the walky-talky.

“We will go down to Bakian to meet the head of my guide association,” Tony informed us, “And then down the other side of the mountain to Cabayo. We can stay with my sister!” This was news to us, and Audun and I scrambled to look at the map we had downloaded on our phones. Going to Cabayo meant that would basically drop down the other side of the mountain from the main Mt Purgatory traverse trail. There was no trail marked on our maps for this option. 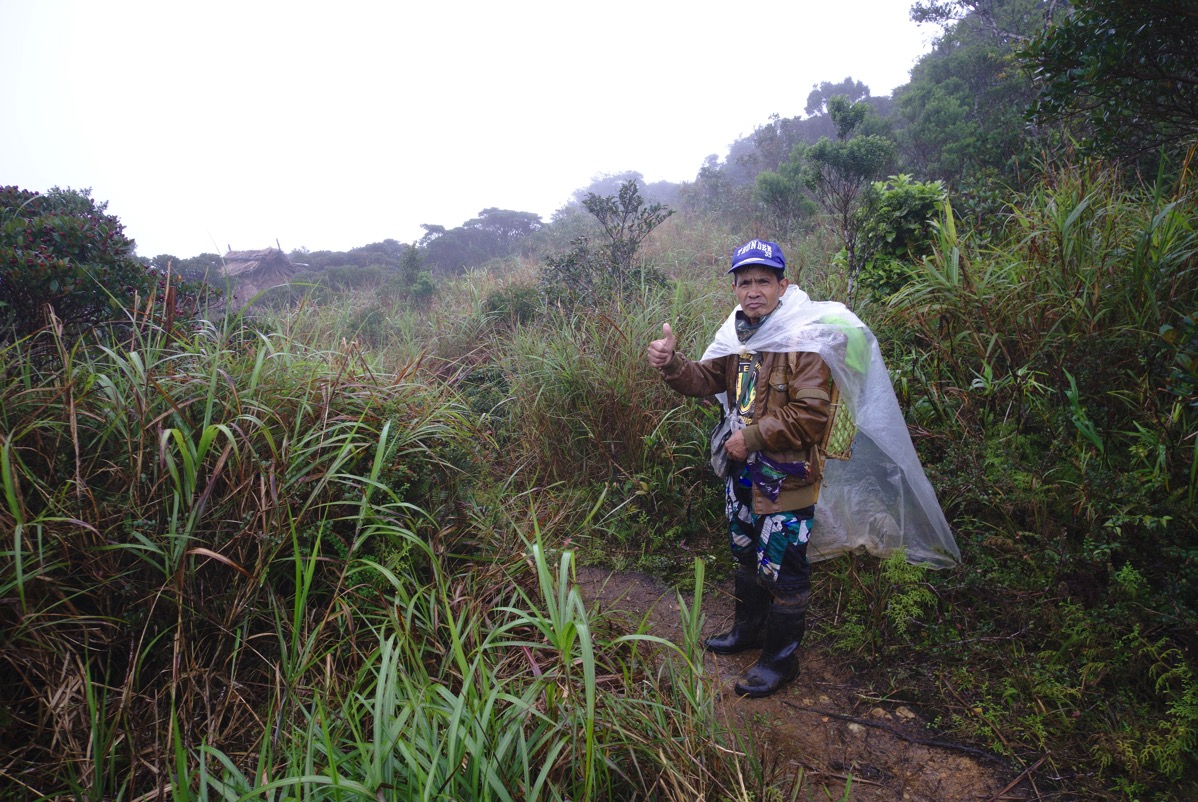 Following our guide, we trekked down the hill from Mt Purgatory to Bakian, which proved to be a small cluster of houses above another expanse of farmland on the steep hillside. Tony’s colleague showed us into a small, unfurnished hut where we could sit inside for lunch.

“Most people take 10 or 12 hours to hike here!” she exclaimed as she had us signed one of the ubiquitous log books. We had been out for just over 5 hours. 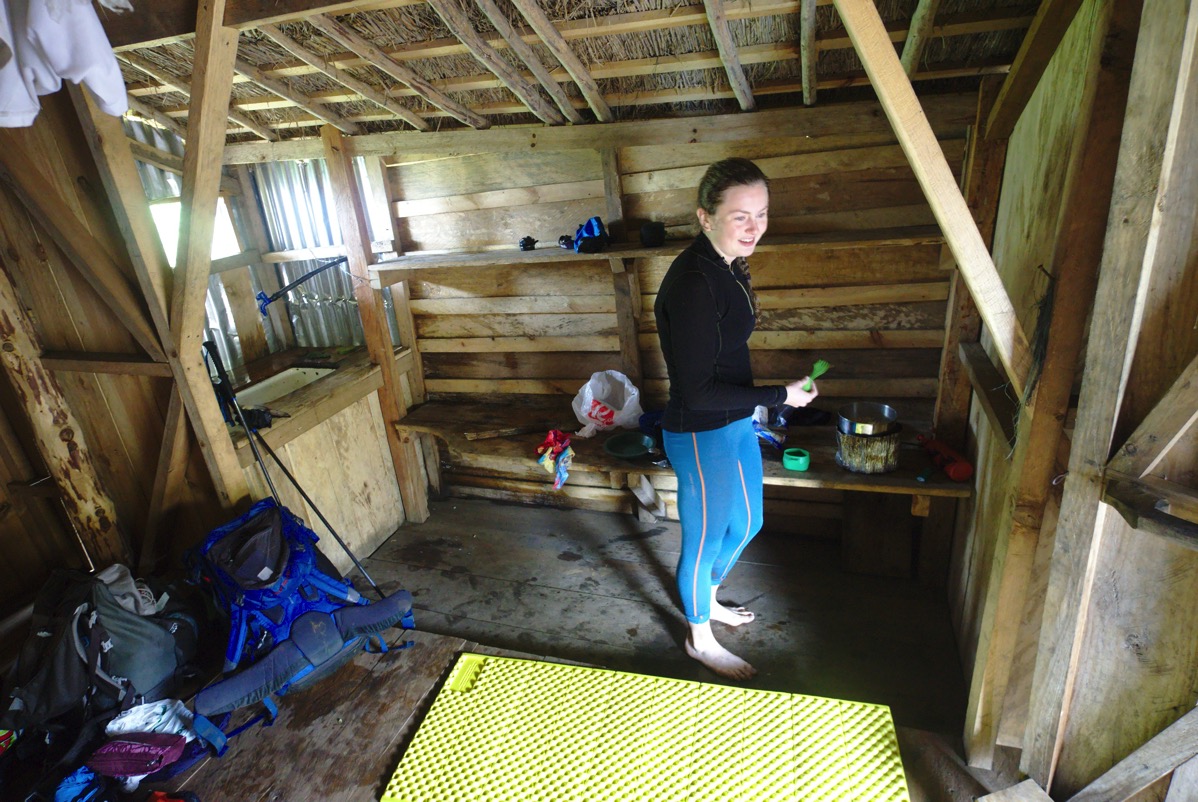 The wooden hut at Bakian where Audun popped the question.

As I entered the wooden hut, I suddenly realized how thoroughly soaked I really was. I changed into a dry wool shirt for lunch and began to cook some noodles. Audun rummaged in his backpack. He came over and sat next to me, holding a small black box. The next few moments are rather blurred in my mind. Before I could wrap my mind around what was happening, he was asking me to marry him and I said yes!

After such an emotional moment, it was surreal to go through the motions of cooking, and eating, and packing up, and then setting out to hike again. But soon we were back out in the rain, an engagement ring firmly placed on my grimy finger. We headed down a narrow trail, bound for Cabayo. 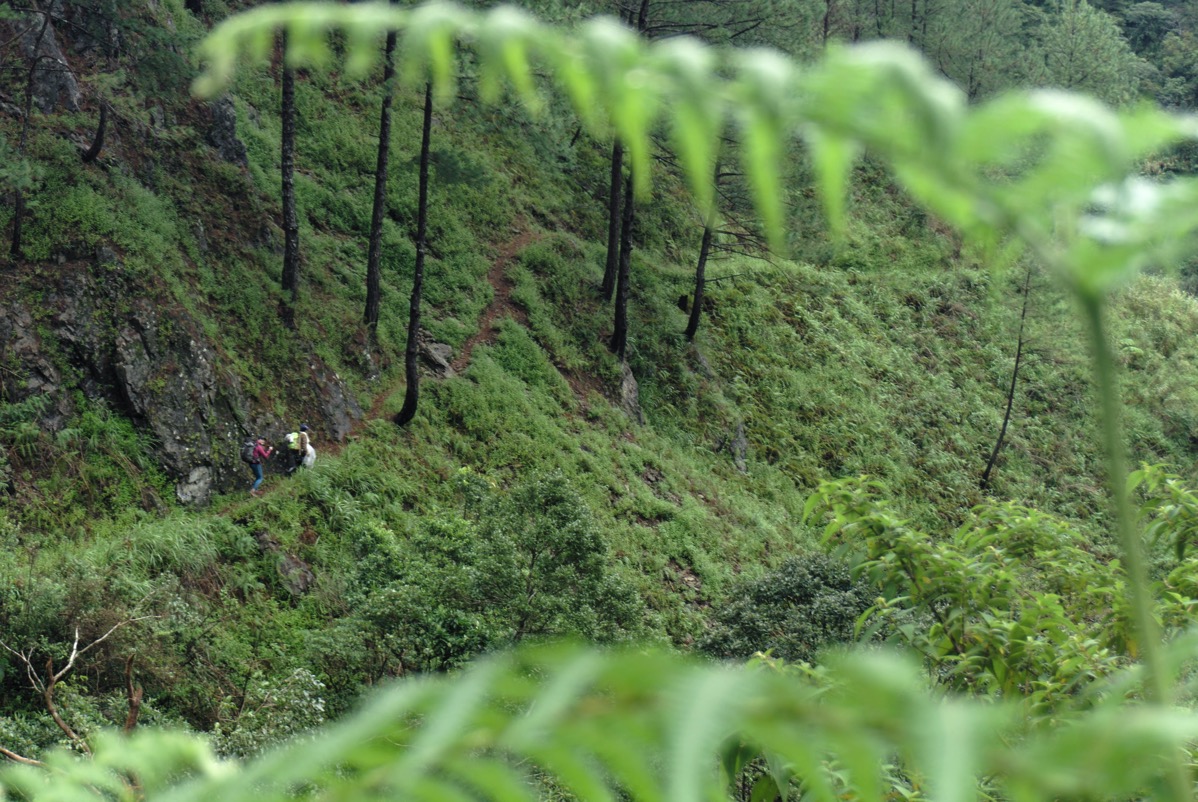 The trail was not very well used, and mudslides had taken out some short sections. Then we reached the first hanging bridge, constructed entirely out of woven steel cables. I looked at it dubiously before stepping on and immediately putting my foot into the void between two of the cables. In my scramble to pull out my foot I scraped my finger on the cable handholds. Stupid! 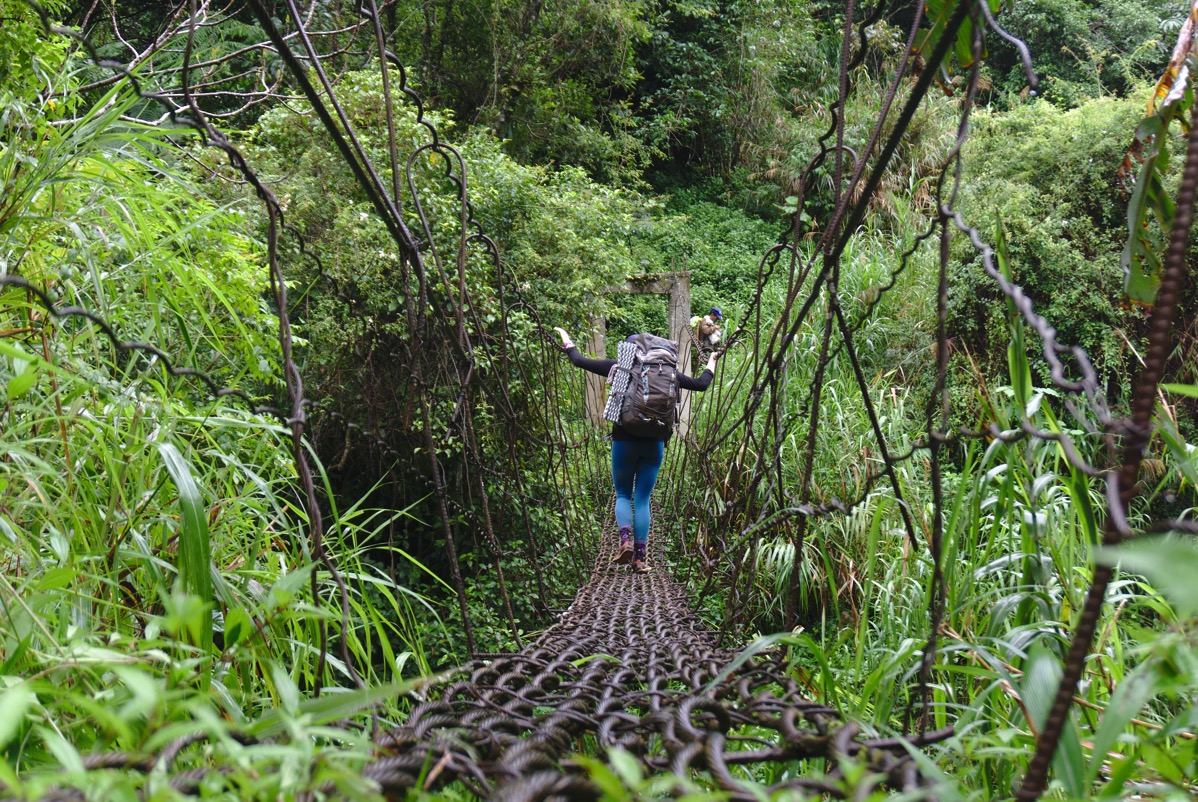 A little later I noticed something black on my shoe and bent down to inspect. To my horror, I discovered that several leeches had made their way into my ankle socks and were greedily leeching blood. I then discovered my irrational fear of leeches. I’m not proud to admit it, but I basically started screaming and made Audun pick them all off! (His reward for becoming my fiancé, I later joked). I changed to long wool socks, hoping the leeches couldn’t get through them. I hate leeches!

We continued on, and I nervously tried to avoid peeking my socks every few minutes. Audun firmly reminded me that every time I opened my sock more leeches could get in! 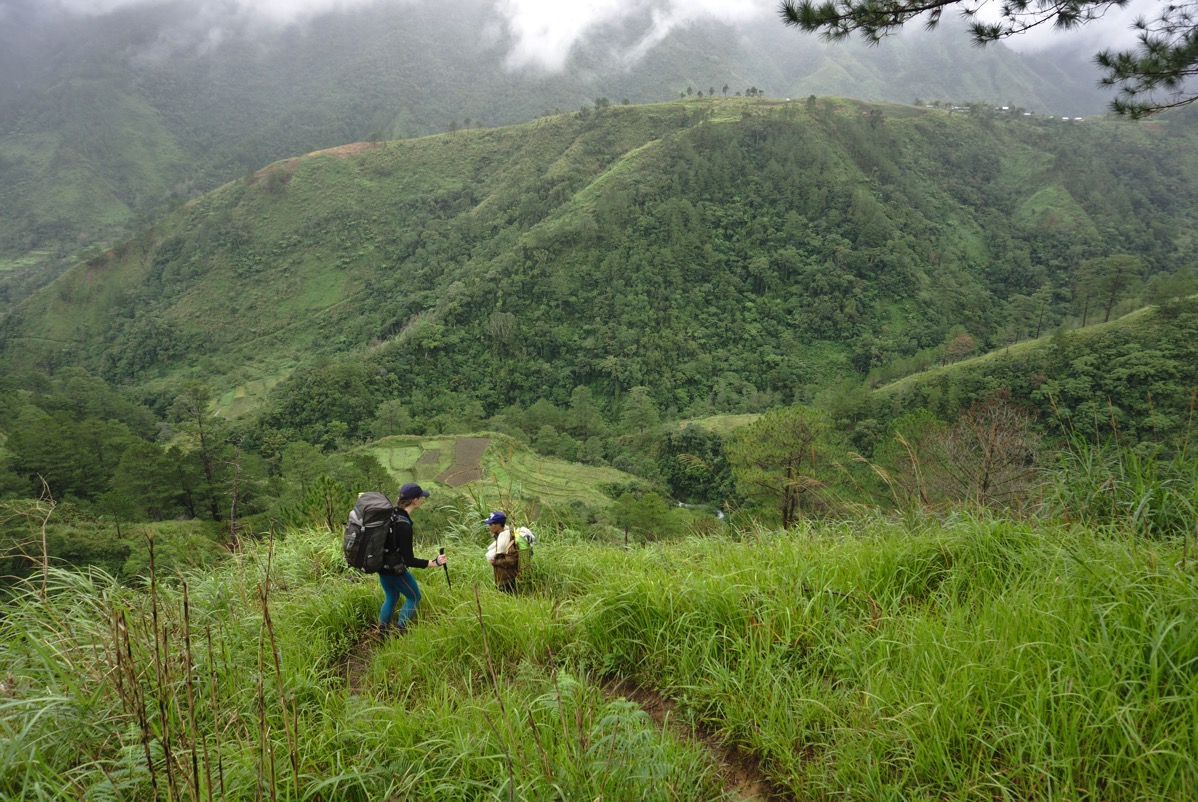 The trail descended steeply to Cabayo, over several more hanging bridges and passed numerous small rice terraces. Cabayo was another tiny village, connected to the outside world by an extremely muddy dirt road reminiscent of the one we had hiked early that morning. The entire population of the village seemed to be sitting around, watching us enter the town. We were the main attraction on an otherwise dreary Tuesday afternoon. We stopped at the Barangay hall to sign a couple of log books while Tony chatted with his friends.

It was mid-afternoon by now, and I was starting to get tired. I asked Tony how far we had to go to his sister’s house, and my heart sunk a little when he replied, “Maybe two hours.”  I still had some snacks, and I furtively ate them, not sure whether it would be polite to share with the towns people. They looked well-feed enough enough, but were clearly very poor. Most of them were missing teeth. 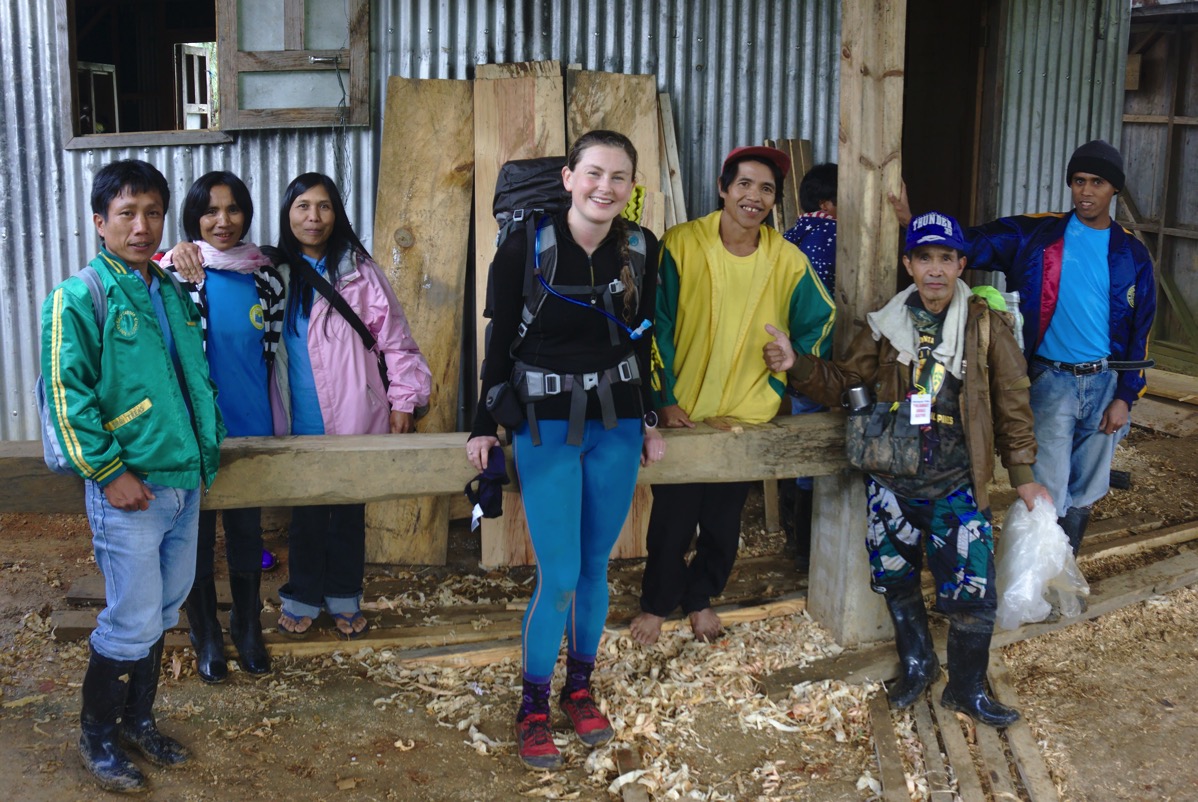 I’m a lot taller than most of the Igorot people!

It cleared off as we hiked out of Cabayo, and the sun hit us, just beginning to dry off our soaking things. 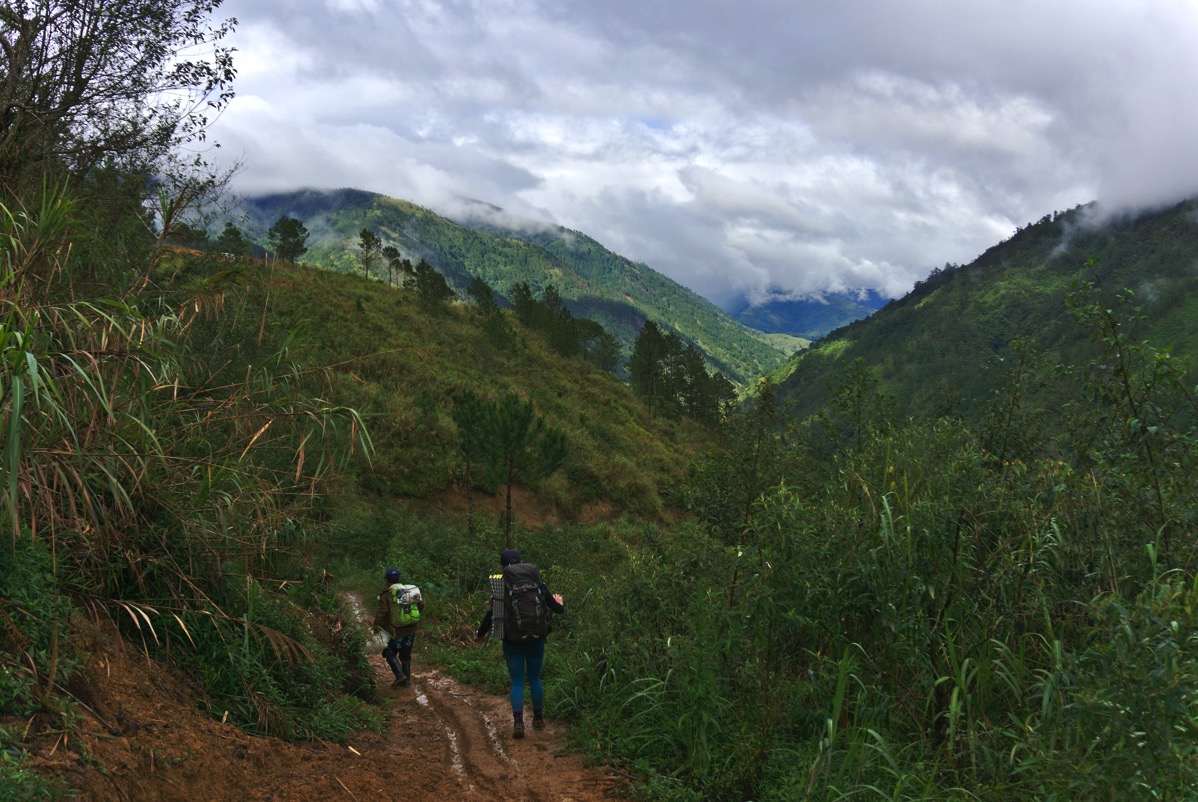 Up the valley, to Tony’s sister’s house!

We were on a well-established footpath, passing by numerous fields and cobbled together with a terrifying collection of suspension bridges. 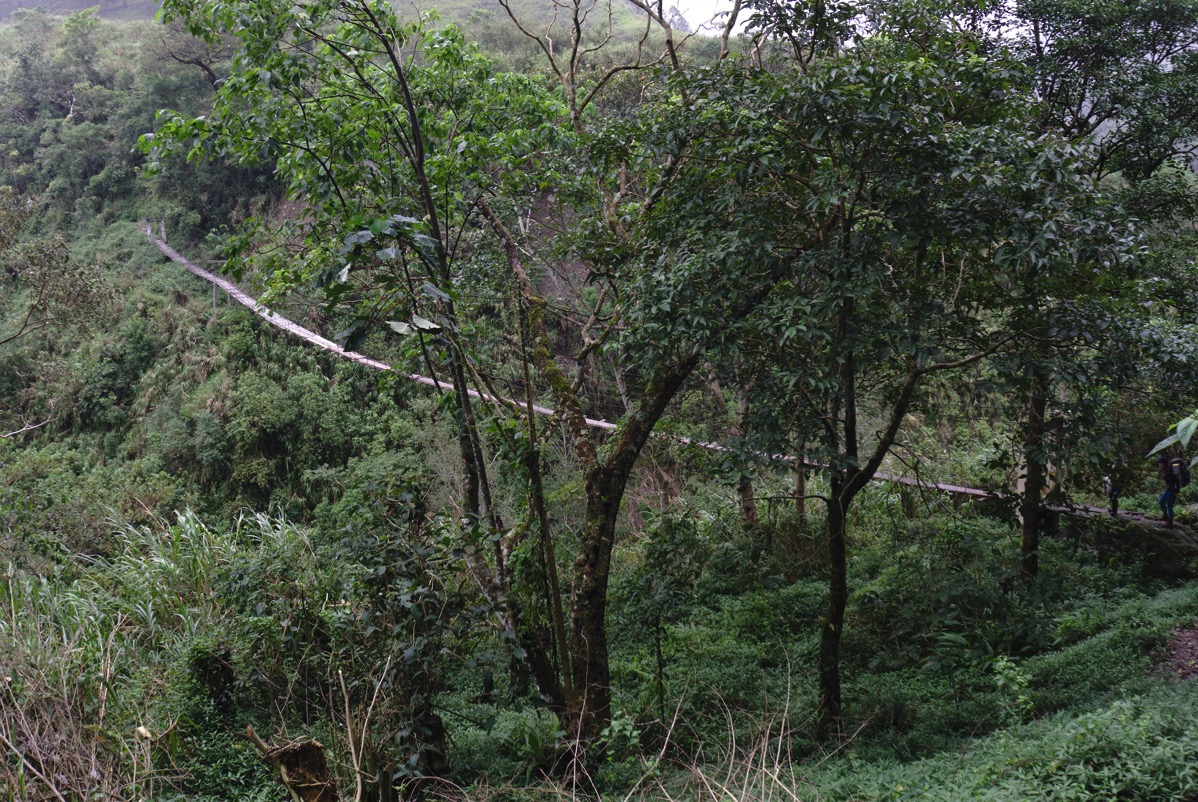 We had been hiking for nearly 12 hours and it had just begun to drizzle again when Tony pointed out a building just off the trail as our destination for the evening. It began to pour as entered the yard outside the tiny house and were shown into a secondary building which seemed to function as a storage shed. Tony’s sister, and three generations of family all lived in the tiny one-room house. 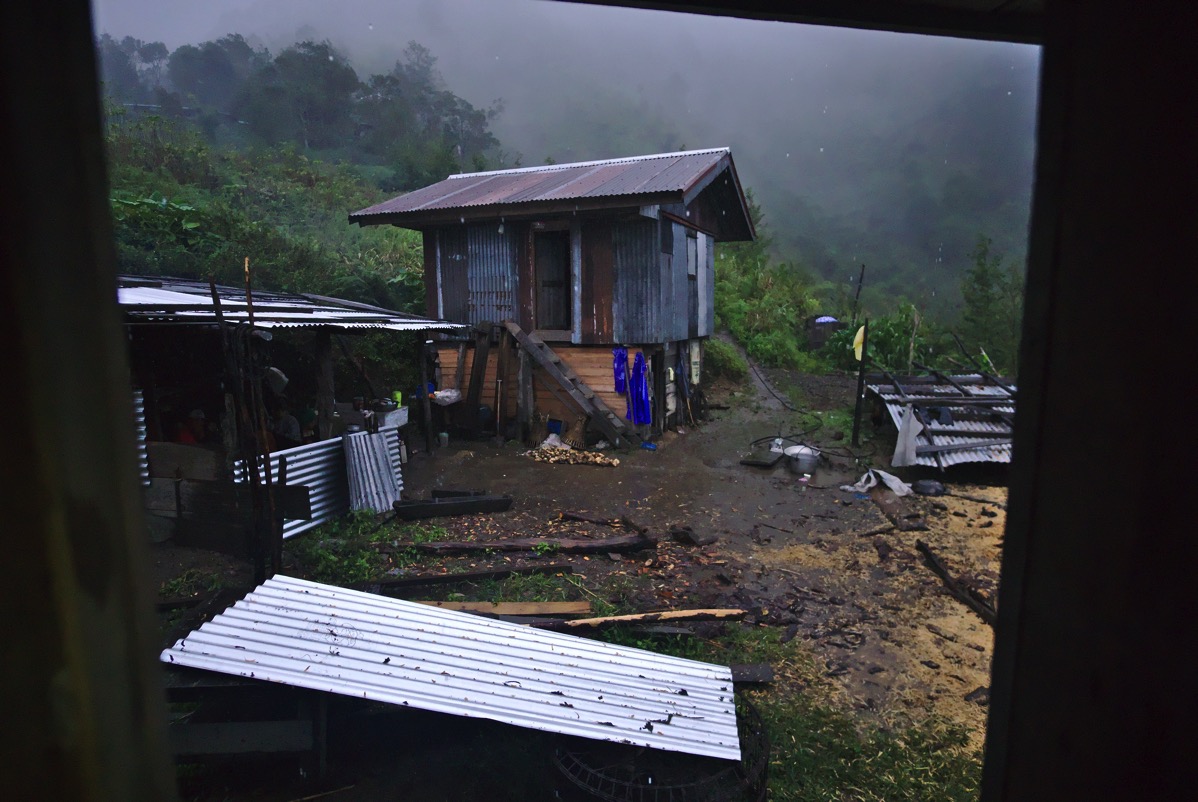 Tony’s sister’s house, where three generations lived in a single room. The lean-to on the left was the combined living room and kitchen for the family.

A lean-to containing two fireplaces under a tin roof functioned as combined kitchen and living room. Audun and I joined the some of the family around one of the fireplaces. Tony’s sister cooked over the other, which was covered by a shaped piece of metal that turned it into a primitive stove. Sitting by the fire was extremely peaceful; either no one spoke English or they weren’t really interested in talking to us. (Based on my experience with the Philippines in general I think it was the former). Tony’s nephew turned the handle on a crank bellows, producing a rattling sound that blew on the fire. The rain drummed on the tin roof and turned the yard outside into a pool of mud.

We were invited to share the family dinner. Once again, the main calorie source was red rice, this time with a side of a spinach-like vegetable and some canned fish. There was chili paste to spice things up. 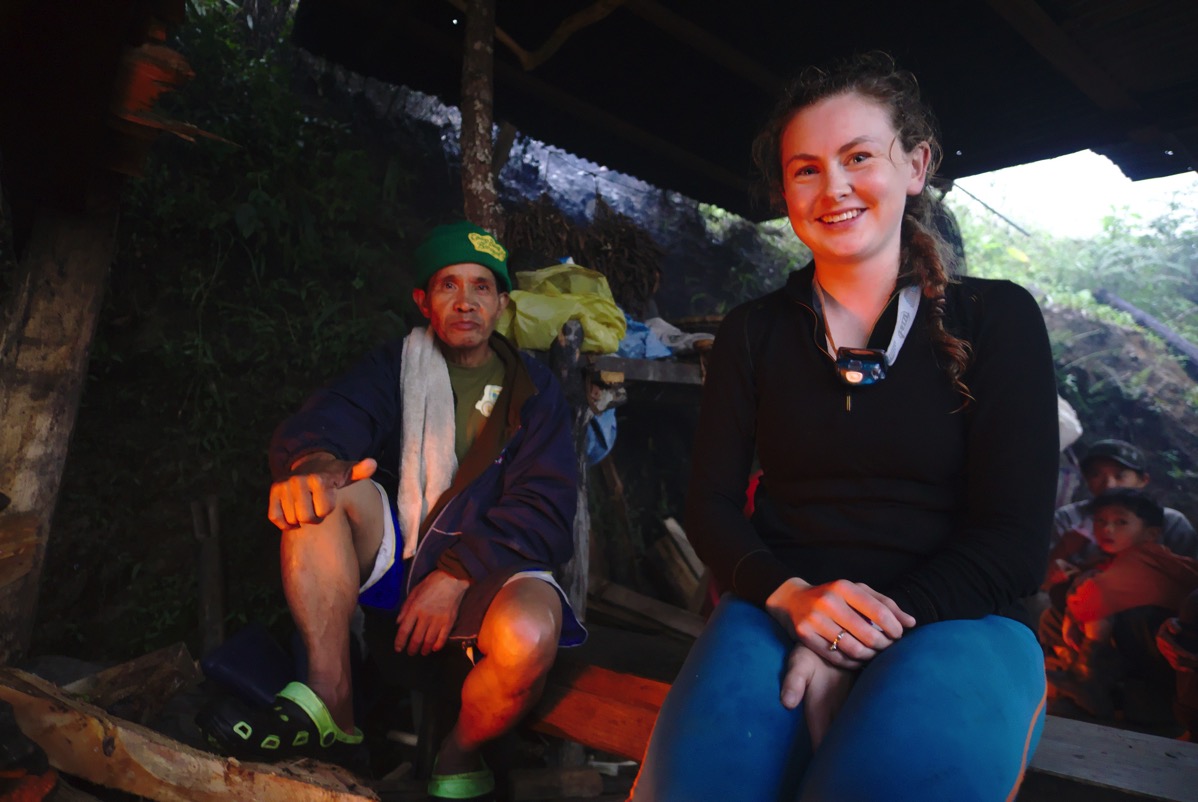 We sat around as the sun set, and the outdoor living room was illuminate by a single battery powered light. Tony’s niece, probably my age or younger, sat and played with her youngest child, smiling shyly as I looked on. Soon after dark everyone began to retire to the tiny house, and we retreated to our storage room. It had been a long, exhausting day, and I’ll remember this one forever.