From Balete to Bohol (The Philippines, part 3)

Read the previous posts on this trip here: [part 1][part 2]

Having falling asleep just after sunset, it was natural to awake just before sunrise. Everything at the tiny mountain farmhouse was just as peaceful as the day before. The fire place under the lean-to was crackling once more and we sat in silence again, waiting for the sunrise. Breakfast was boiled kamote, the local variation of sweet potato, peeled, boiled, and eaten whole with the hands. It was white and tasted vaguely of honey. The food may not have been complex, but there was a lot of it, and the leftovers would be lunch for the family. 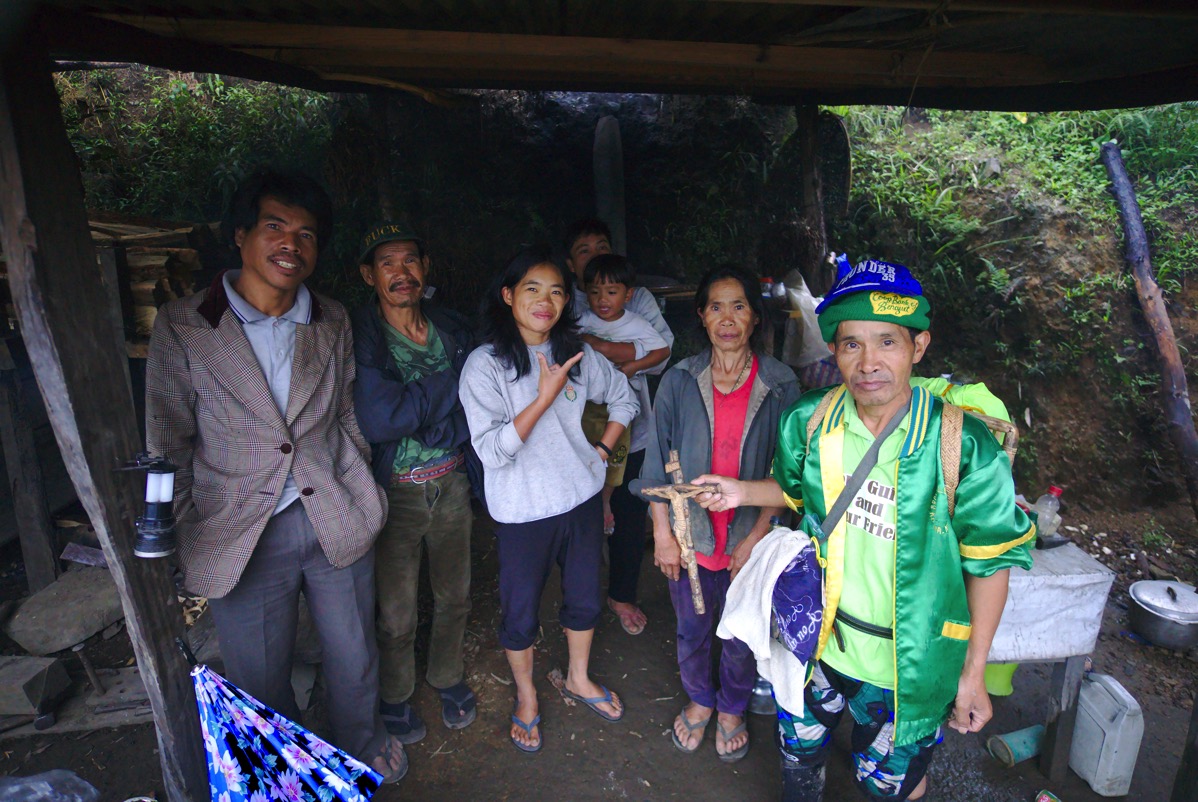 Tony and his family on the morning of our departure.

Soon enough Audun, Tony and I were off, hiking through the foggy morning. Although our original goal had been Mt Pulag, the highest mountain on Luzon island, we had decided to eschew this particular peak in order to enjoy the path less taken: first the Mt Purgatory traverse, and now to Dumli-ing falls. First we had a two hour trek out to the village of Balete, still all on trails, once again in variable but wet weather. I marvelled at how far we really were from the rest of the world. I hadn’t had cell phone coverage since Baguio. This was doubly strange since I had just gotten engaged, and only Audun and I really knew about it. 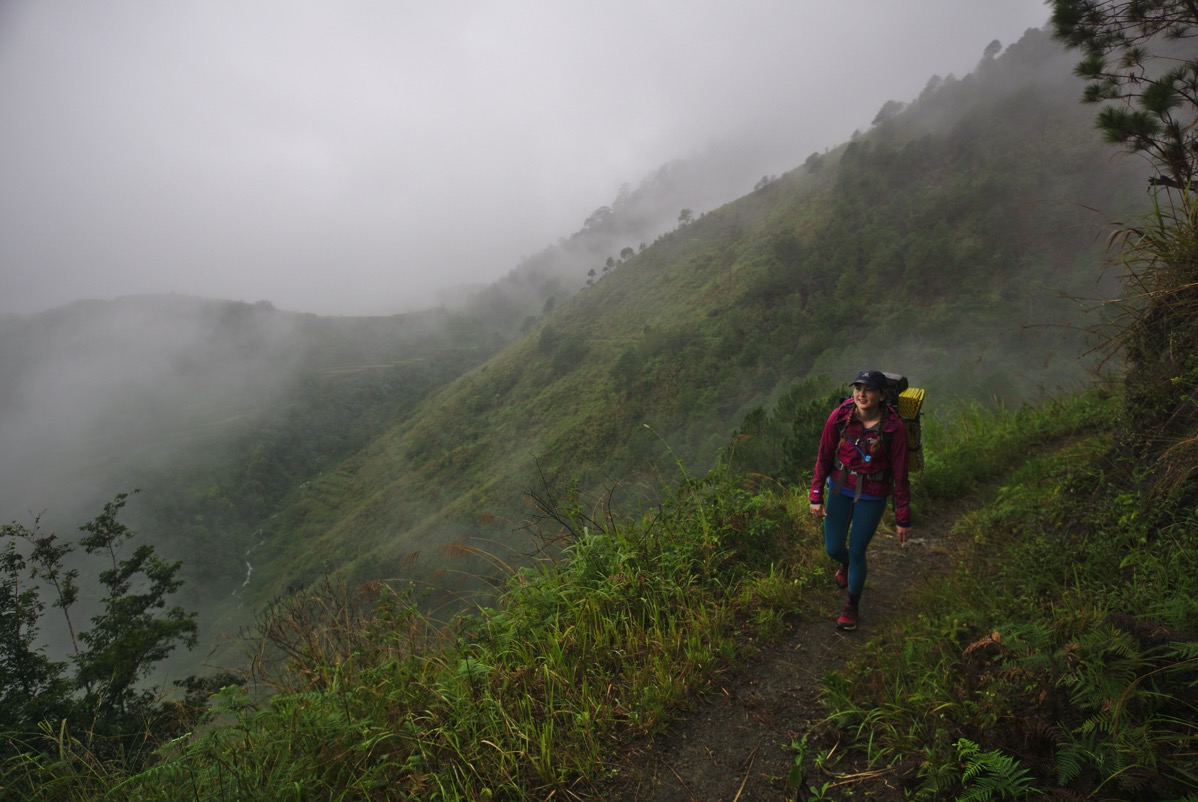 Hiking out to Balete.

The village of Balete is connected to the outside world by a rough dirt road, only recently constructed. We ditched our packs at the local Barangay hall and hiked down to Dumli-ing falls. The trail was overgrown, and Tony forged ahead with a small machete, hacking away the vegetation in front of us. I stopped occasionally to pick zealous leeches off my shoes, much less afraid of them now that my ankles were covered by long wool socks and the leeches were not sucking my blood.

Dumli-ing falls could have served as the model for Paradise falls in Pixar’s beautiful movie Up. A long, single drop fanned out and crashed on wicked-looking rocks below. This would be such a big tourist attraction, I thought, if it weren’t so hard to get to! 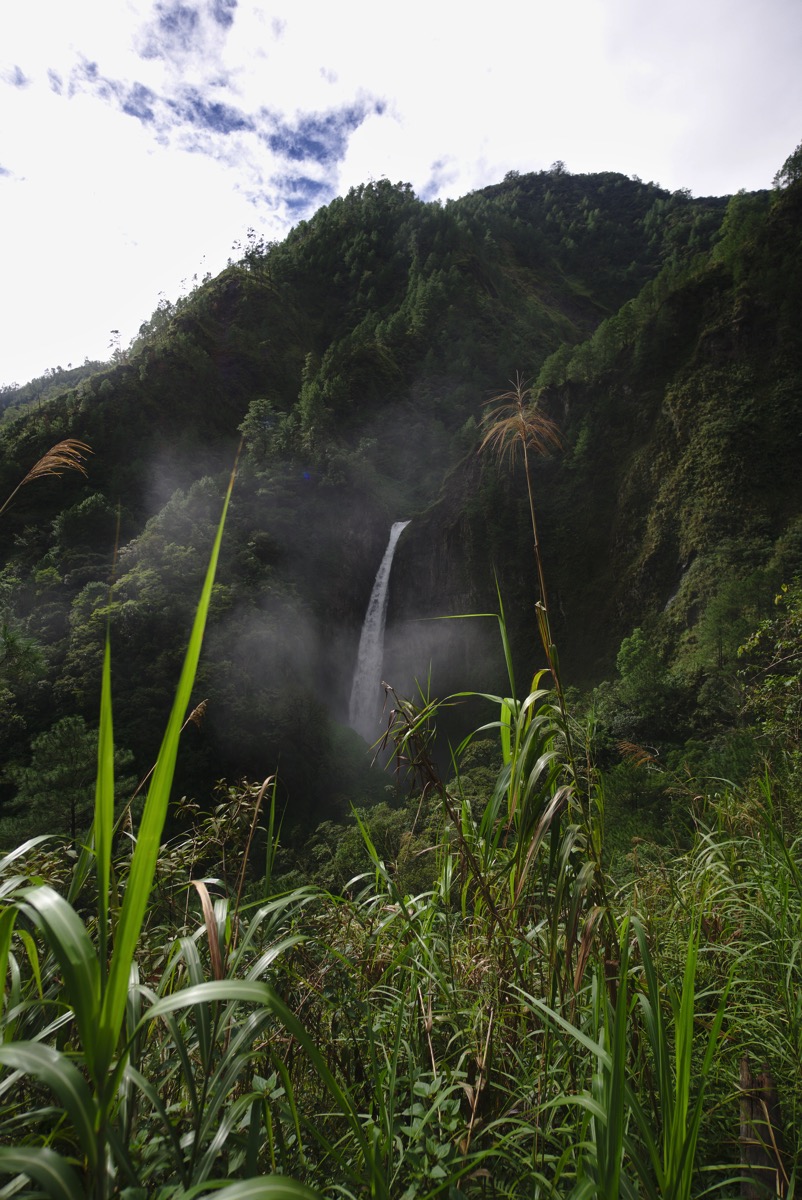 Back in Balete, we were invited for coffee, boiled bananas and buns at the local school. It was a national holiday, so the children weren’t there, but the administration was hard at work, and we discussed the challenges of education in the Philippines with the headmistress.

Afterwards we took a group photo, making what I only later realized was the Duterte fist symbol. It’s hard to understate how popular Duterte actually is in the Philippines. In the west, we only hear horror stories about all the murders happening under his regime. These stories are true, and it’s horrible. However, it’s hard to criticize Duterte to the locals in the Cordilleras, who just seem so damned pleased with him. (I’m sure this would differ if you polled opinions on the streets of Manila, where drug addicts and dealers alike are being slaughtered in droves). 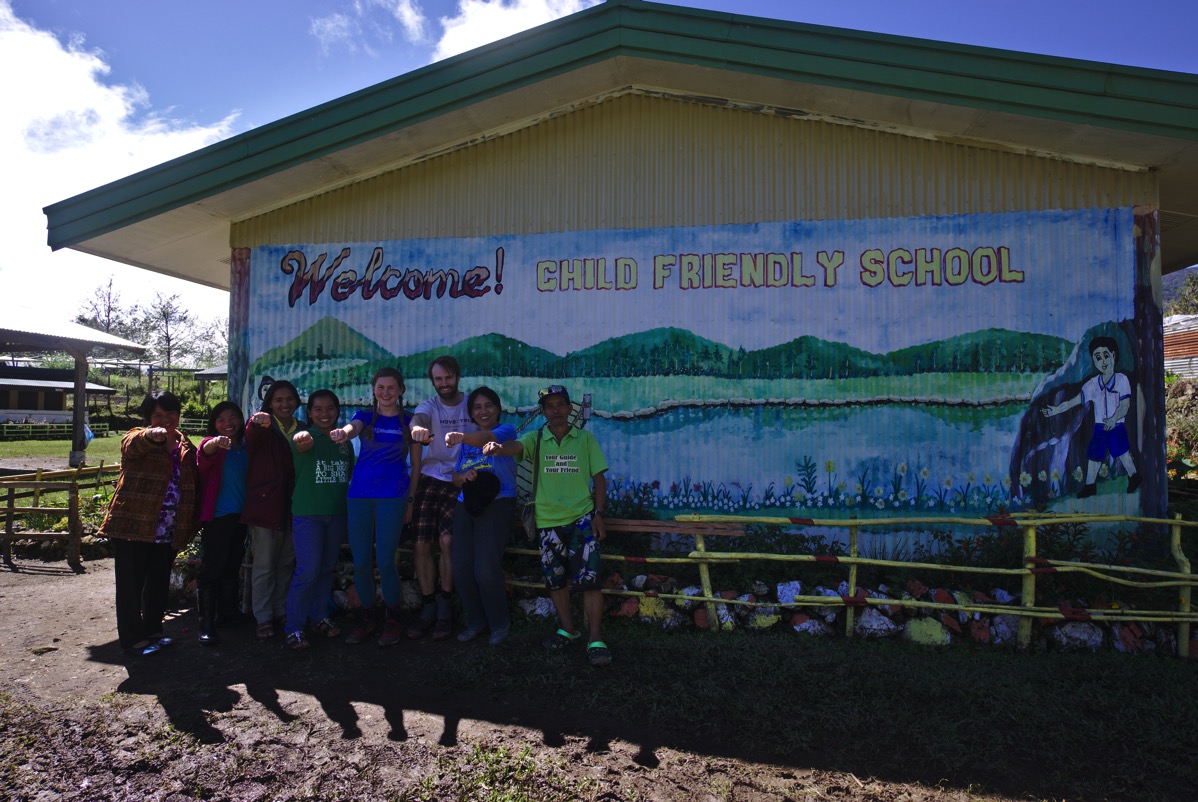 Go Duterte? With the administration of Balete School.

Next began a long, arduous journey back to Manila, in order to travel to our next destination, the tourist island of Bohol. We hiked up a muddy road from Balete for a while, before being picked up by a passing van and spending a terrifying hour wondering if the ageing van would make it up the next rugged incline.

Then we hitch-hiked down to Ambageg, where we waited for one of the ubiquitous vans headed for Baguio. All of the vans that passed were full, so we took a tricycle ride (also terrifying) a little further down to the main road. Finally, a van head for Baguio picked us up and we were off. 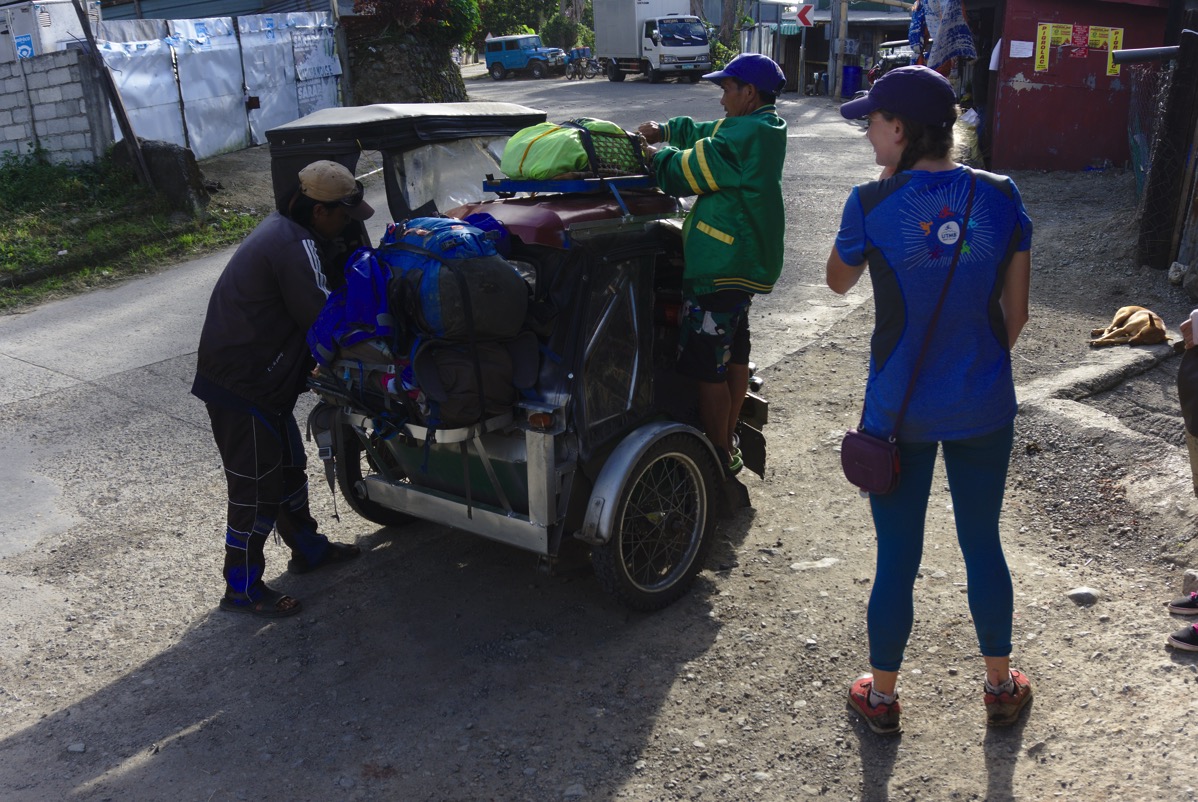 The tricycle driver and Tony load our things onto the tricycle.

From Baguio, another night bus brought us back to Manila, and we headed to the airport to pick up our baggage and catch the first flight to Bohol. Which eventually brought us to Pangalao Nature Island Resort, and an experience that was basically the exact opposite of what we had been doing for the first four days in the Philippines. It was so luxurious it basically made Audun and I slightly uncomfortable. 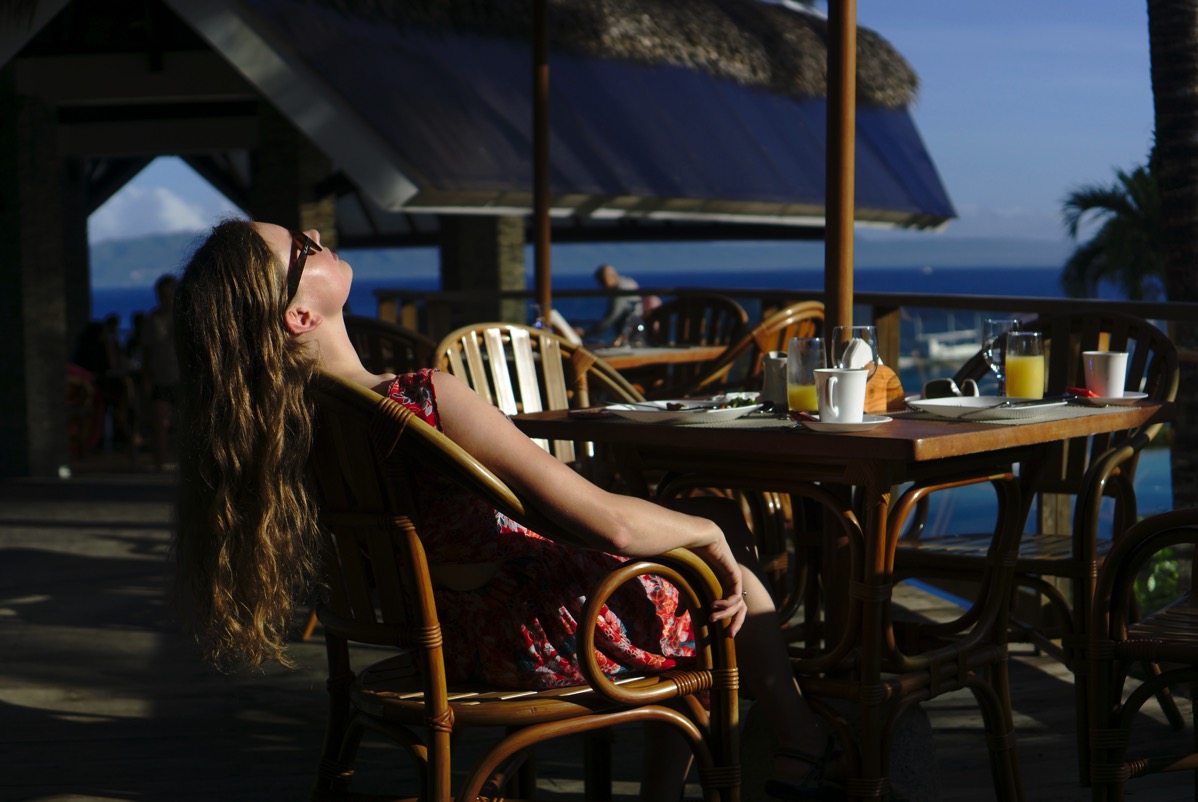 We arrived at our bungalow with a private jacuzzi and view of the ocean and proceed to unpack the wet, disgusting contents of our hiking packs, spreading them all over the spacious terrace. For the next three days, we attempted to live the resort lifestyle. We rented a tennis court for an hour, than lay by the pool, devouring books and editing photos. It was comfortable and relaxing in a way most of my vacations are not. Drying camping equipment on our terrace while enjoying the private jacuzzi.

Unfortunately, occasional rainstorms marred our tropical paradise. I also felt strangely imprisoned in the resort. We travelled to different places on the island to eat dinner, and the contrast between the opulence within the resort’s gates and houses of the locals was pretty stark. I felt like an outsider on a completely different level than I had while hiking in the Cordilleras. 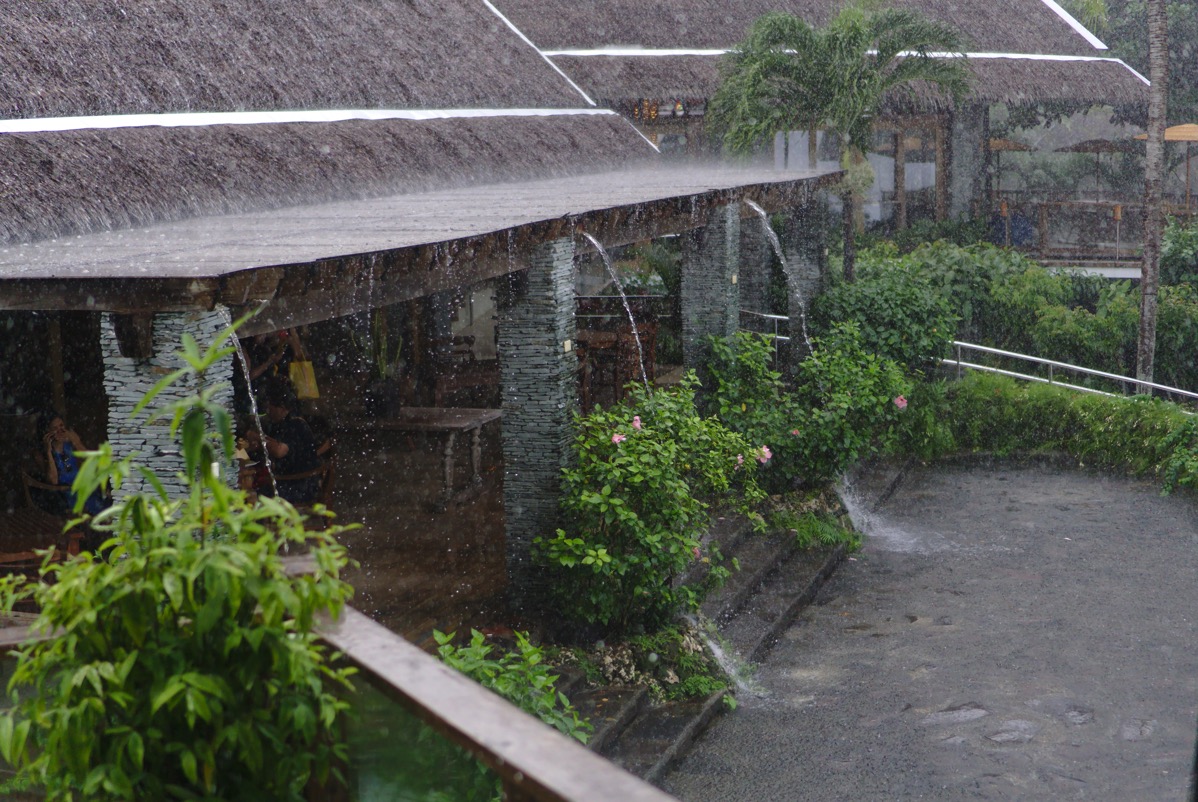 One of the daily rainstorms.

One day, we hired a car and a guide to see the main sights on the island. The tarsiers visiting center was pretty incredible, although I became dubious when I realized that tarsiers actually shouldn’t be awake during the day and that undue stress could kill them. The tarsiers in the reserve looked like miniature aliens, and they were most definitely awake. 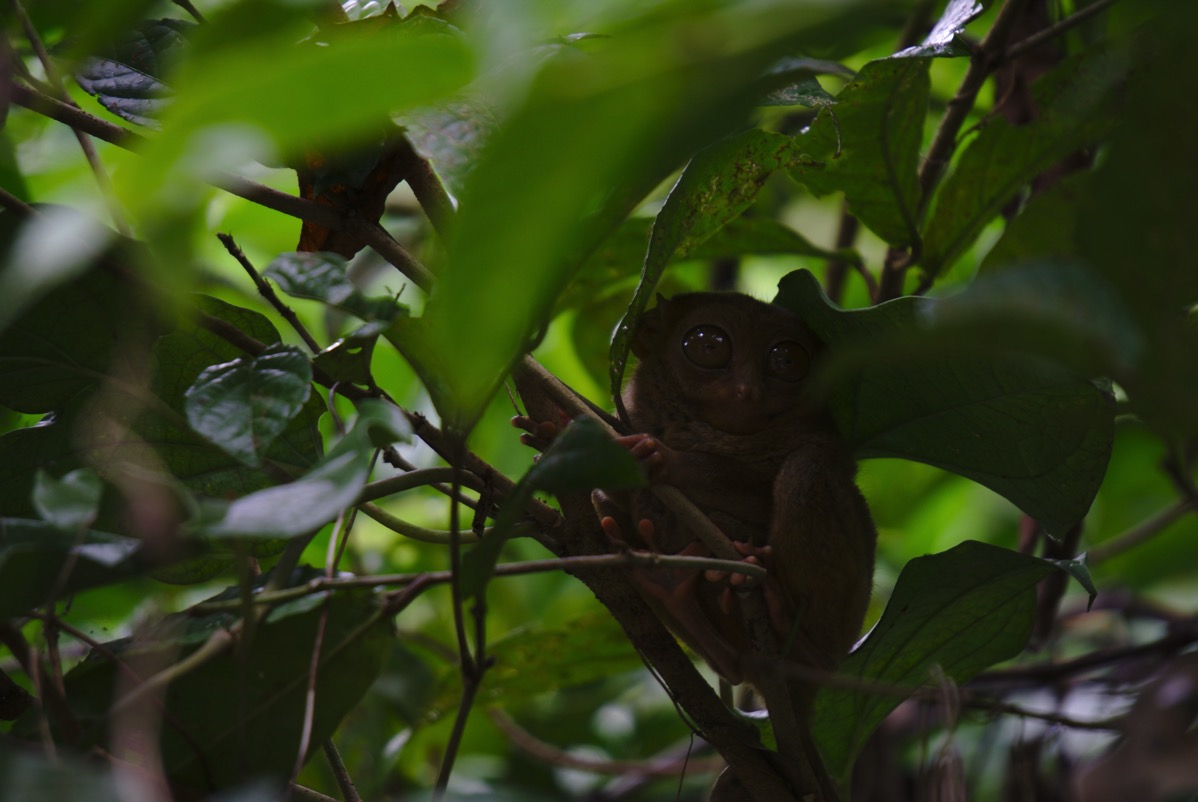 Tarsiers in a semi-natural habitat. They're vulnerable to extinction, and hopefully tourism provides motivation to keep them alive and well.

Then there was the famous Chocolate Hills, hundreds of natural conical karst mounds that dot the landscape of mainland Bohol. Audun and I had originally wanted to rent mountain bikes to see them, but we had had enough of being wet and muddy for one trip and so decided against it. Then our guide shanghaied us into rented an ATV to drive around the base of the hills. It was not my idea of fun. The guide made us stop all the time and pose for cringe-worthy pictures. I dislike the whole packaged tourism thing, where someone else decides where you have to take pictures and how you should experience a landscape. I guess I should have learned to stay clear of guided tours by now...

In all honesty, the best way to see the Chocolate Hills was from the viewing platform. One Chocolate Hill is cool, but it’s the experience of seeing hundreds spread into the distance that’s breathtaking. 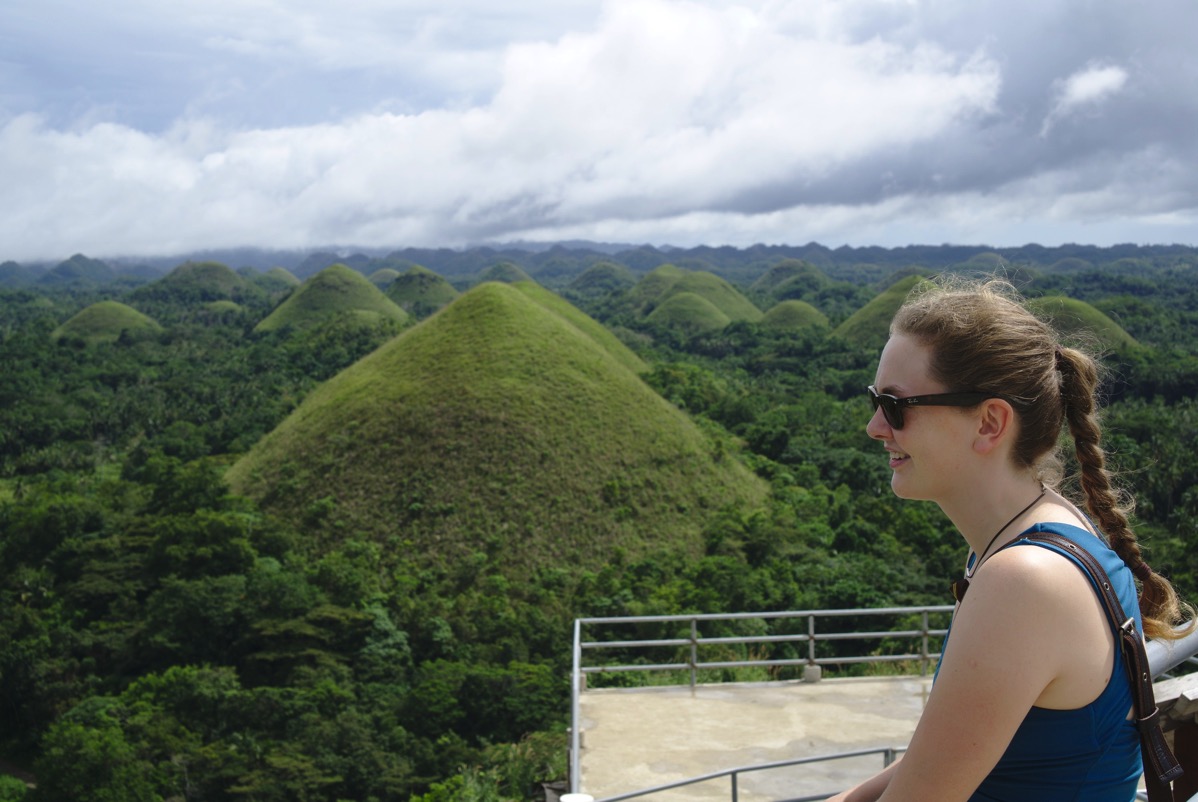 Taking in the Chocolate hills (they turn brown during the late summer).

Besides the tarsiers and the Chocolate Hills, we took in the Bataclan church, and a river cruise at lunch accompanied by lived music (ouch).

Three nights at the swanky resort was enough for both Audun and I. On the last morning, I decided to get in a run before the 30 hours of travel back to Norway. I settled on the hotel treadmill, but to my dismay there was a man whose job it was to watch me run and attend to my every need. He tried to give me a glass of water while I was going at full tilt, and I nearly fell over and spilt it. Then I paused the treadmill to collect myself, and he pretend to be all impressed with my 25 minute run. (You know nothing, Jon Snow!) It was super awkward. I guess I just not cut out for a lifestyle of being waited on hand and foot! 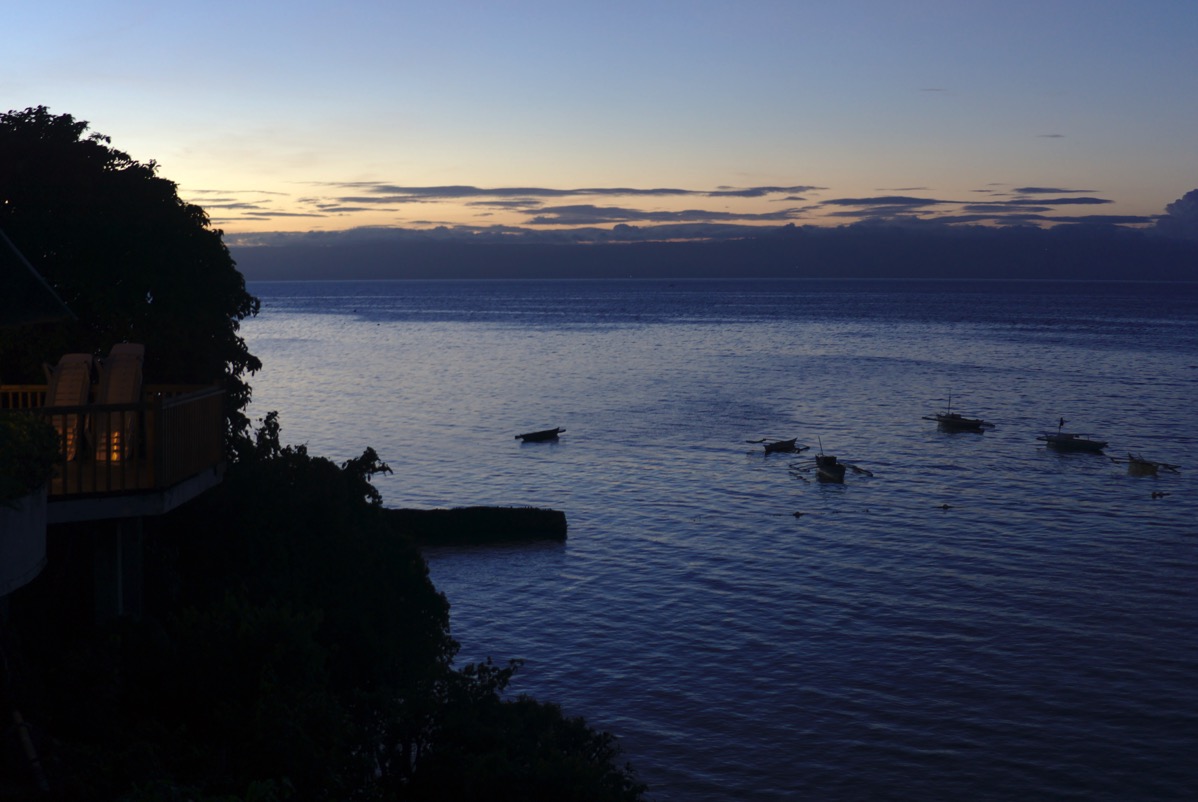 The ocean view from our bungalow at the resort.

The lesson? The best and most authentic moments of tourism are those off the beaten path.