Cycling in the French Alps, part 2

In June, Audun and I spent a week cycling through the French Alps. For various reasons I never finished writing about that trip, but maybe pictures from the warm, sunny Alps are just what you need to end the year? You can read the first post about that trip here.
Day 4: La Mure - Le Bourg d’Oisans + Alpe d’Huez. 99.3K, 2330 vertical
From La Mure, we pedaled up the road under the snow-capped peaks of Les Écrins up to Col d’Ornon. The climb was tranquil, but surprisingly difficult. It had looked like a pimple on the elevation profile for the day, dwarfed by what was to come. 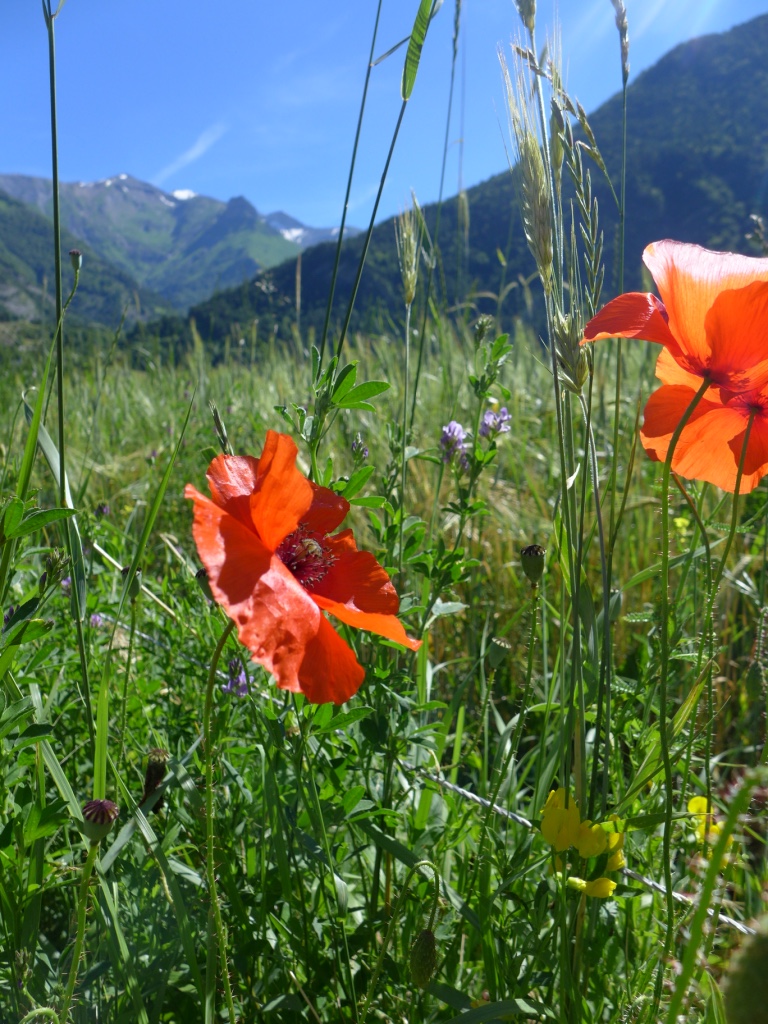 Poppies on the way up Col d'Ornon
We didn’t see many cyclists until we reached the top of the col. On the descent, more and more cyclists appeared, some climbing uphill, others taking in the view, while a few daring souls zoomed past us on the downhill at death-defying speeds. It felt like we were following a trail of ants to their nest, the nest in this case being the center of all things road biking in France: Bourg d’Oisans. 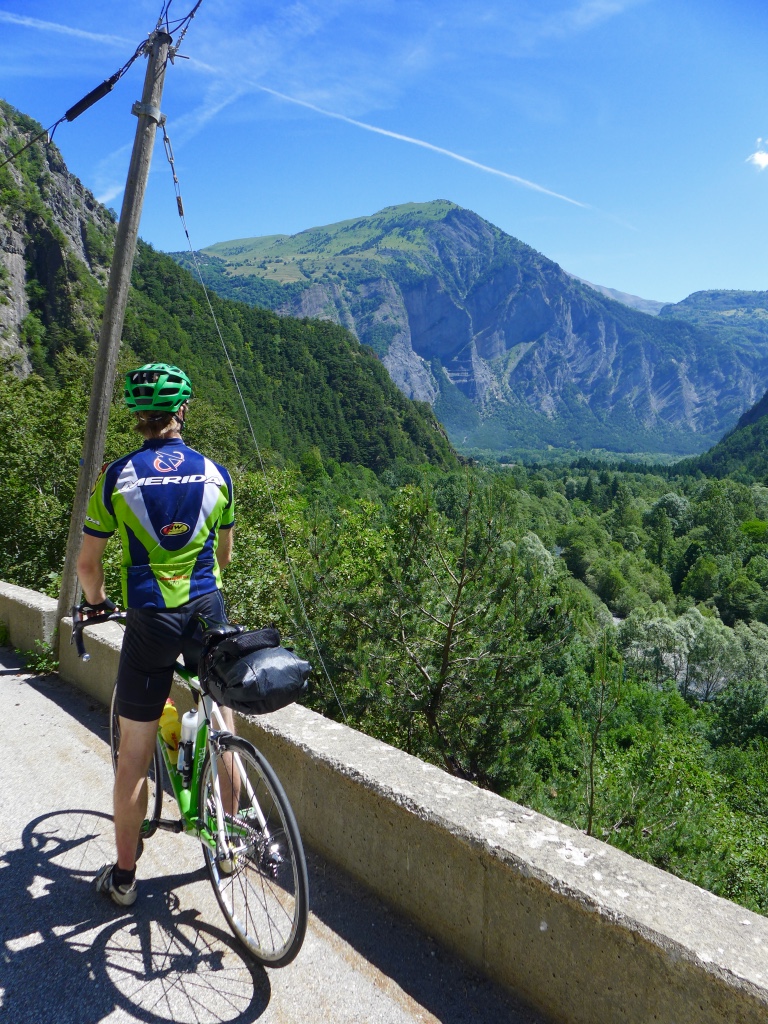 Audun takes in the view on the descent to Bourg d'Oisans
I have passed through Bourg d’Oisans once before, on a rainy October day shortly after purchasing my first road bike. Bourg d’Oisans in June is a completely different town. There were literally more bikes than cars. For the first time on our trip, lycra was the exactly right thing to be wearing.
We found our hotel, but the proprietor was out cycling (because why else would you live there really?). So we stopped for lunch in the shade, discussing our next move. Obviously we were going to ride Alpe d’Huez, the central attraction in Bourg d’Oisans. But I vaguely remembered seeing the pro riders descend down the back side in last year’s Tour de France. Audun found some information cards in the hotel reception, and we discovered Col de Sarenne, the alternative, roughly paved descent of Alpe d’Huez. We were sold.
But first I had to PR on the ascent of Alpe d’Huez. I certainly wasn’t going to let my 2012 self be faster than my 2016 self, on a new carbon bike to boot. It was a hot day, and I set out hard up the switchbacks. Audun rode next to me, not working nearly as hard, but pointed out that we were passing people whenever I voiced self doubt. We met a talkative Swiss guy who made the last few hairpins pass more quickly. 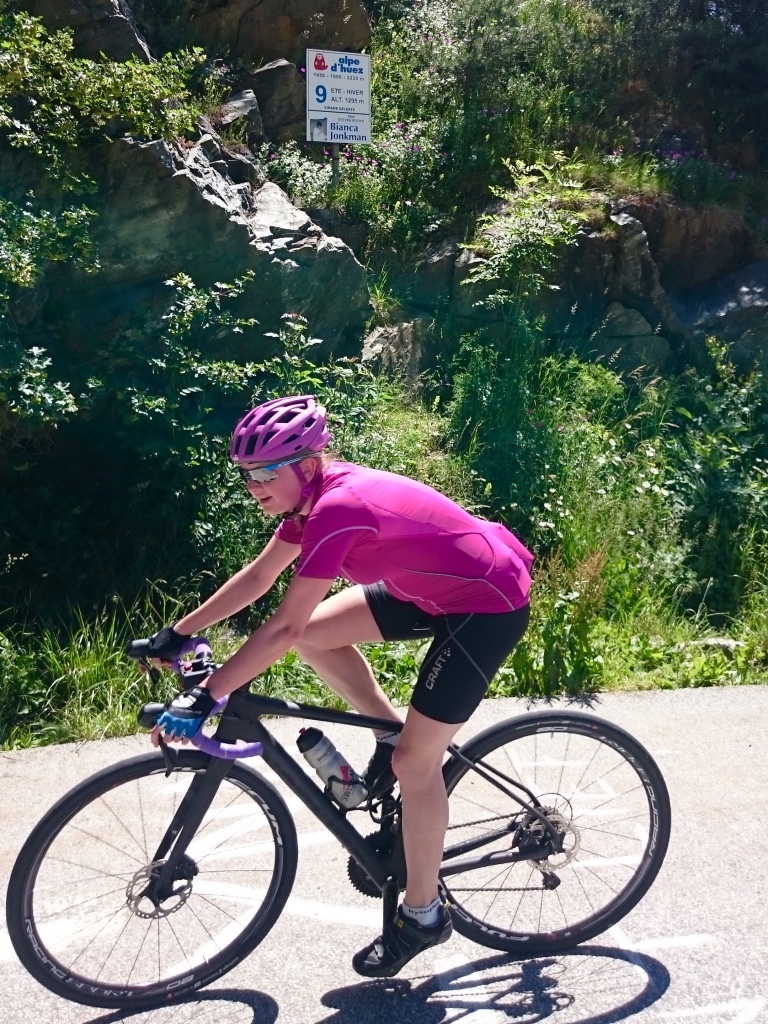 Working hard at hairpin number 9 on Alpe d’Huez,
By the time we reached the top, I had laid down a 20 minute PR on the climb, and had completely toasted myself in the effort. I was overheated, dizzy and queasy. Determined to continue, I found a stream to cool down in.
Soon I was ready for Col de Sarenne. The road continue to climb, and past the circus that is Alpe d’Huez, it turns out the scenery is stunning. I saw the peak of La Meije, so familiar from my ski days at Les Deux Alpes, in the distance. Then there was the long, hairpin descent, and the flat ride around the mountain back to Bourg d’Oisans. 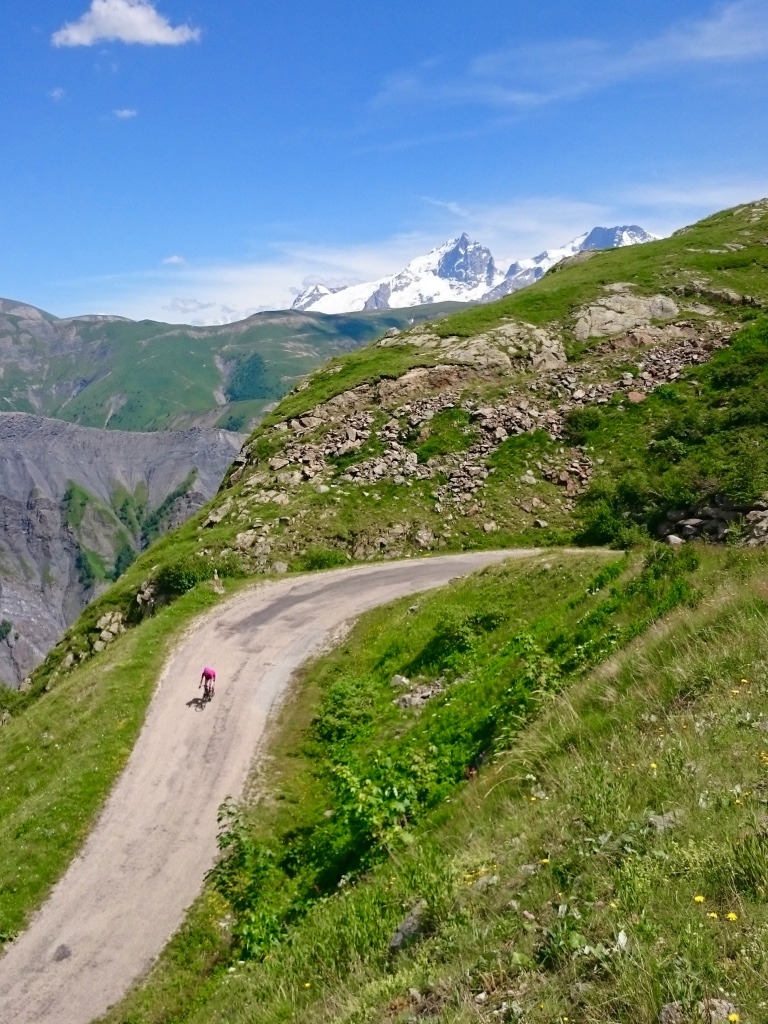 Descending Col de Sarenne, with La Meije in the background.
Back at the hotel, it was time to relax with some good food and beer. Tomorrow was the big day.
Day 5: Le Bourg d’Oisans - Albertville. 124.1K, 3027 vertical
On the menu for day five was two monster cols: Col de Glandon and Col de la Madeleine. We could choose to ride the valley around to Albertville after Col de Glandon if this turned out to be too much climbing. 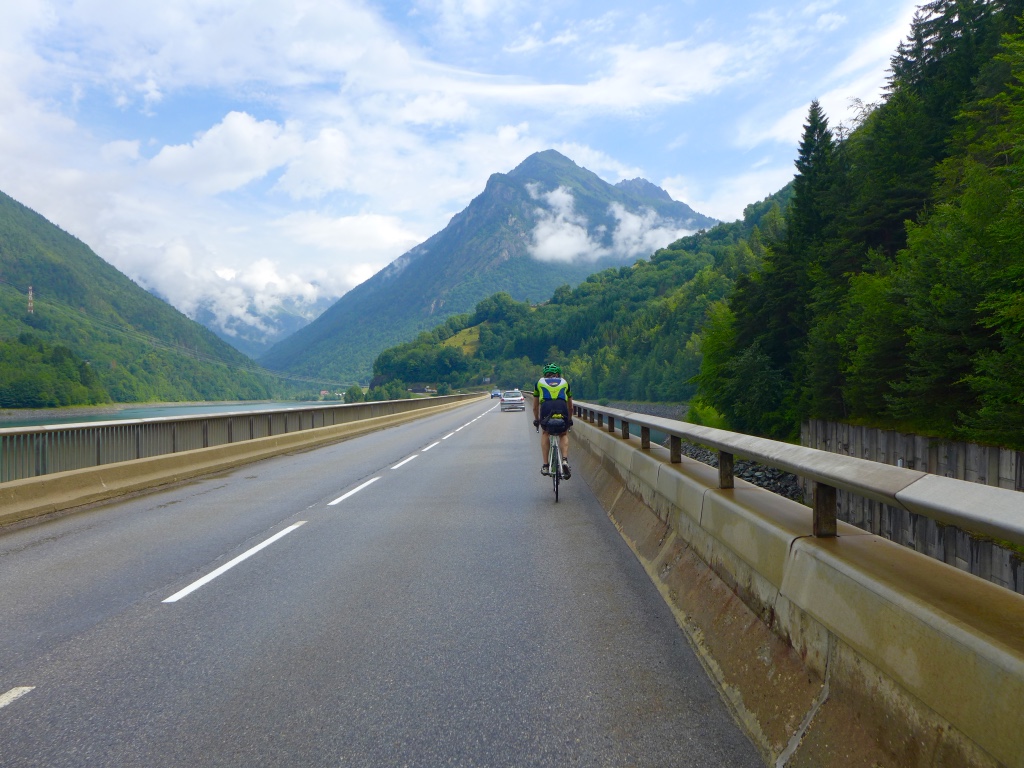 Setting out from Bourg d’Oisans.
Col de Glandon dovetails with Col de la Croix Fer most of the way. It’s a long climb, but the beginning is the steepest part and the scenery makes up for the pain of climbing.  We met droves of other cyclists to chat with on the ascent. 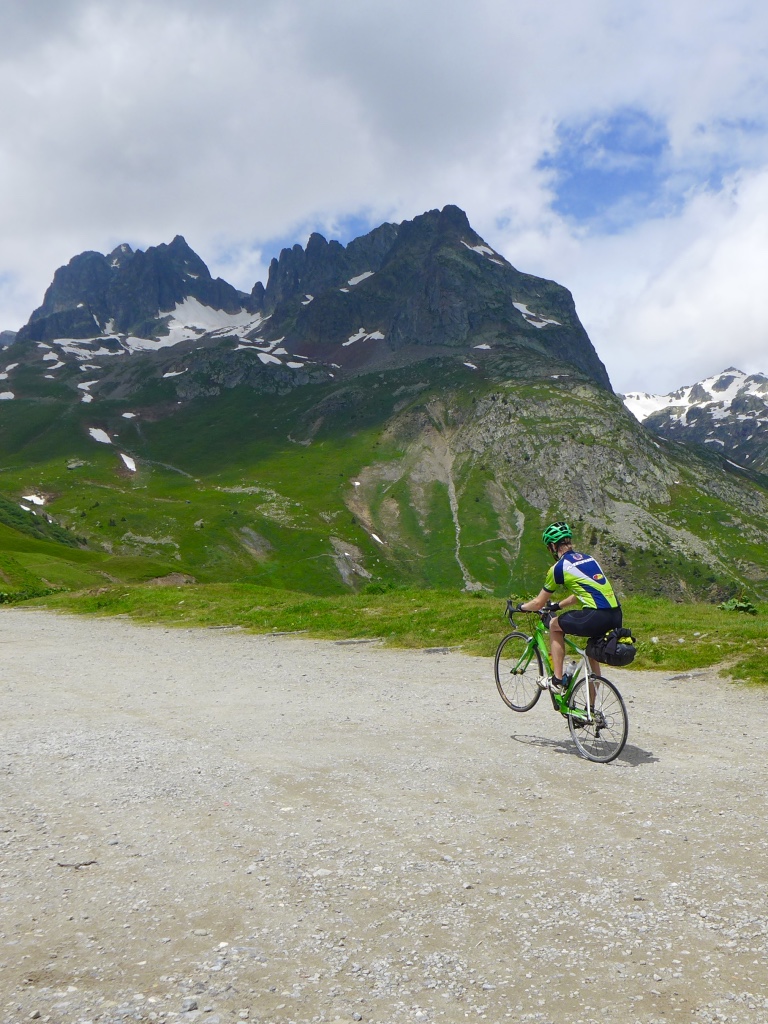 Audun eminates Peter Sagan on Col de Glandon.
The descent from Col de Glandon was beautiful, and faster than Col de Sarenne as the road was significantly higher quality. 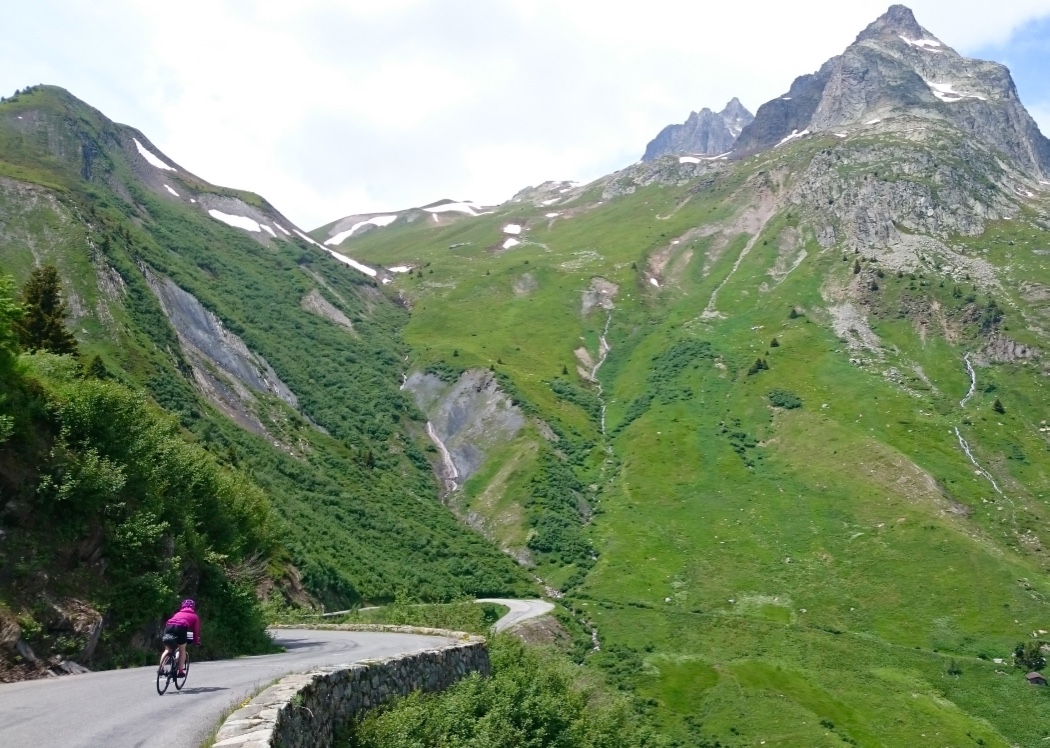 The descent from Col de Glandon
In the village of La Chambre, we reached the decision point: drag ourselves over one more punishing climb, or roll around the mountain to Albertville? We mulled over it over a picnic lunch. I was feeling pretty tired, with 5 full days of cycling in my legs. At the same time, who knows when I would get the opportunity to cycle Col de la Madeleine again? In the end, we decided to go for it. There was no hurry; I didn’t have a time to beat like on Alpe d’Huez.
It was a ridiculously long climb to the top of Col de la Madeleine, but at least there were wild strawberries to eat on the route. 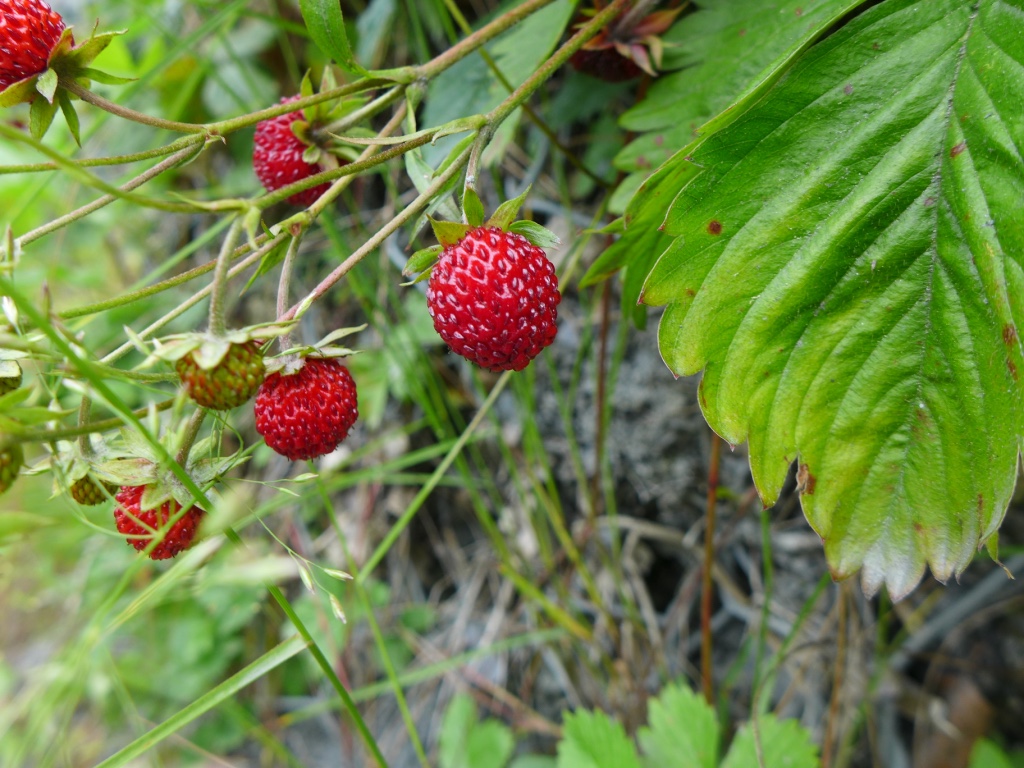 Strawberries along the Col de la Madeleine road.
Long distance cycling is like long distance running in some ways: just keep pedaling and you will get there in the end. 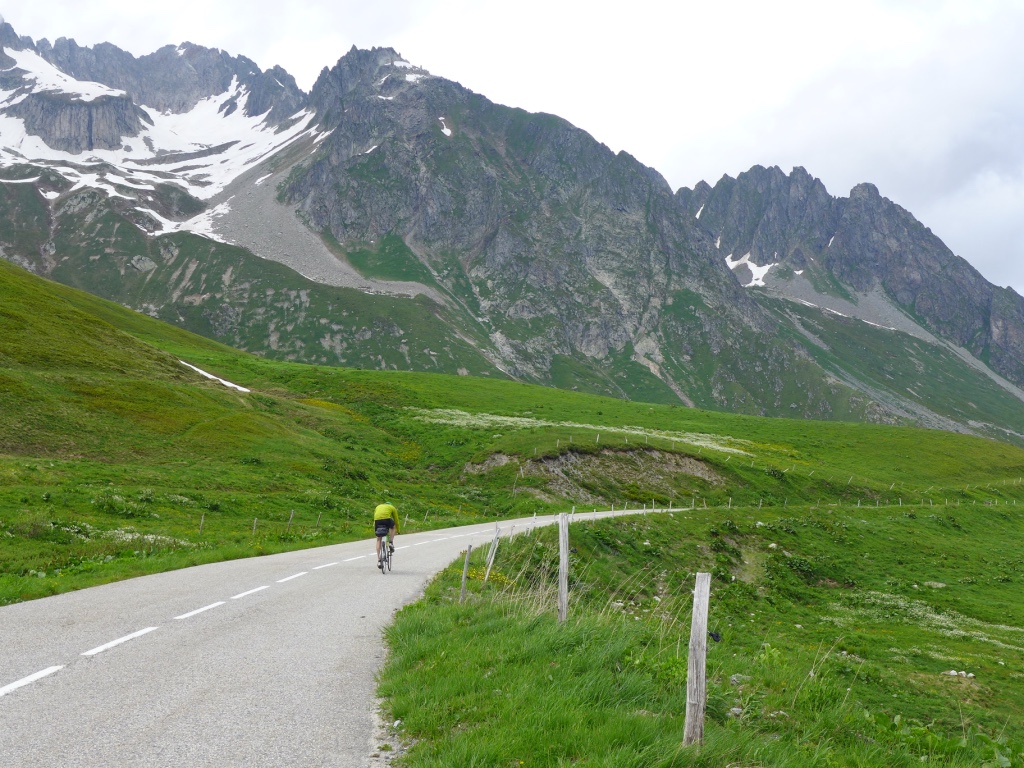 Col de la Madeleine.
Day 6: Albertville - Annecy. 55.2K, 798 vertical
I felt positivity hungover from the previous day’s efforts when we woke up in Albertville. Still, I didn’t want to just ride the boring, flat road around to Annecy. We decided to through in the smallest col would could find on the route to Annecy for good measured.
I regretted this decision as soon as we started climbing. My climbing legs were utterly trashed.
“I had better get a really big ice cream this afternoon,” I grumbled. 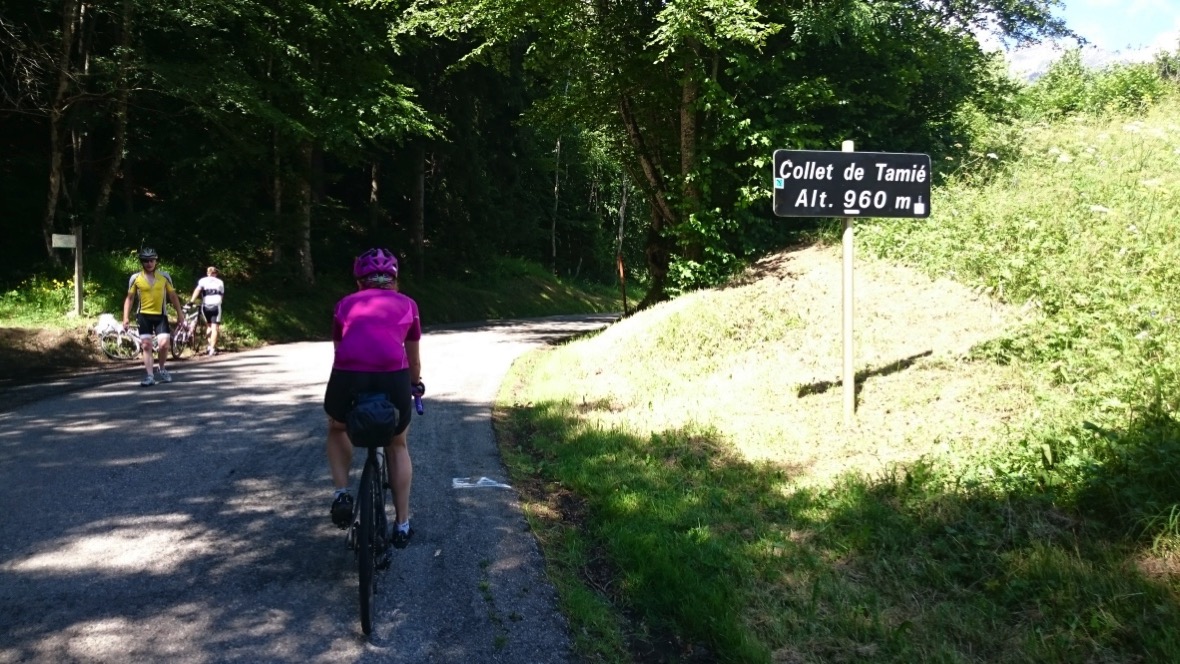 Col de Tamié. Phew.
I had vaguely remembered that there were beaches along Lac d’Annecy, and we managed to find one, deciding that three hours cycling would just do for today. Then we bought the largest ice creams the restaurant next to the beach sold... 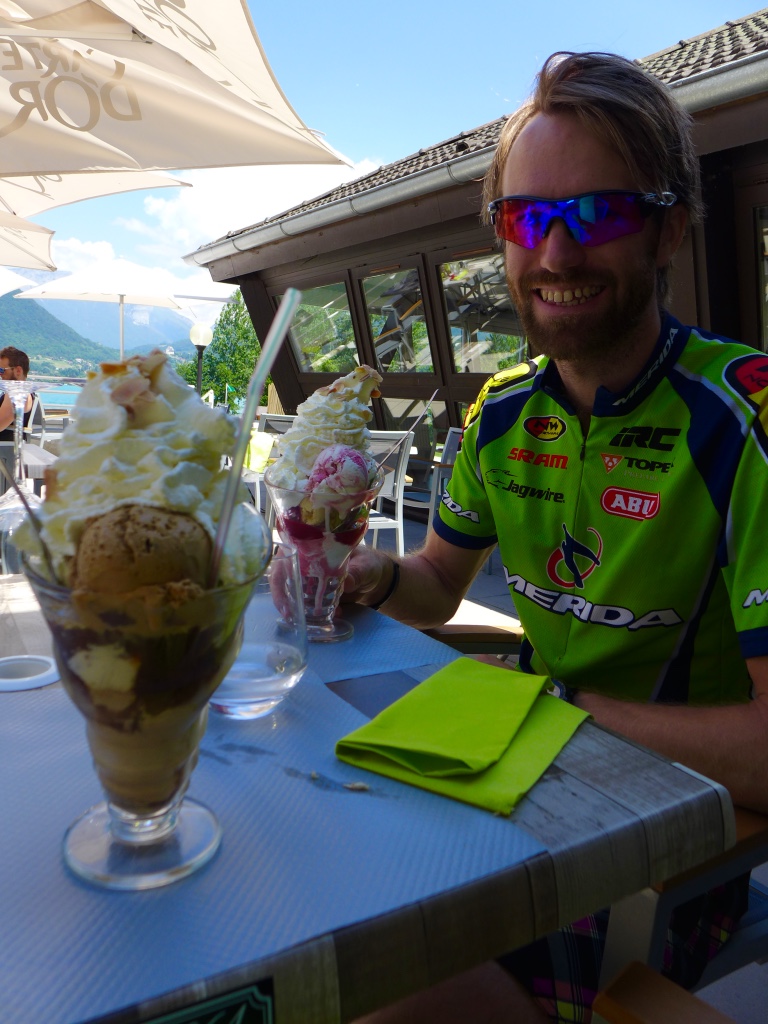 The largest ice cream sundaes on the menu.
…and enjoyed a relaxing afternoon watching the clouds drift over Lac d’Annecy. 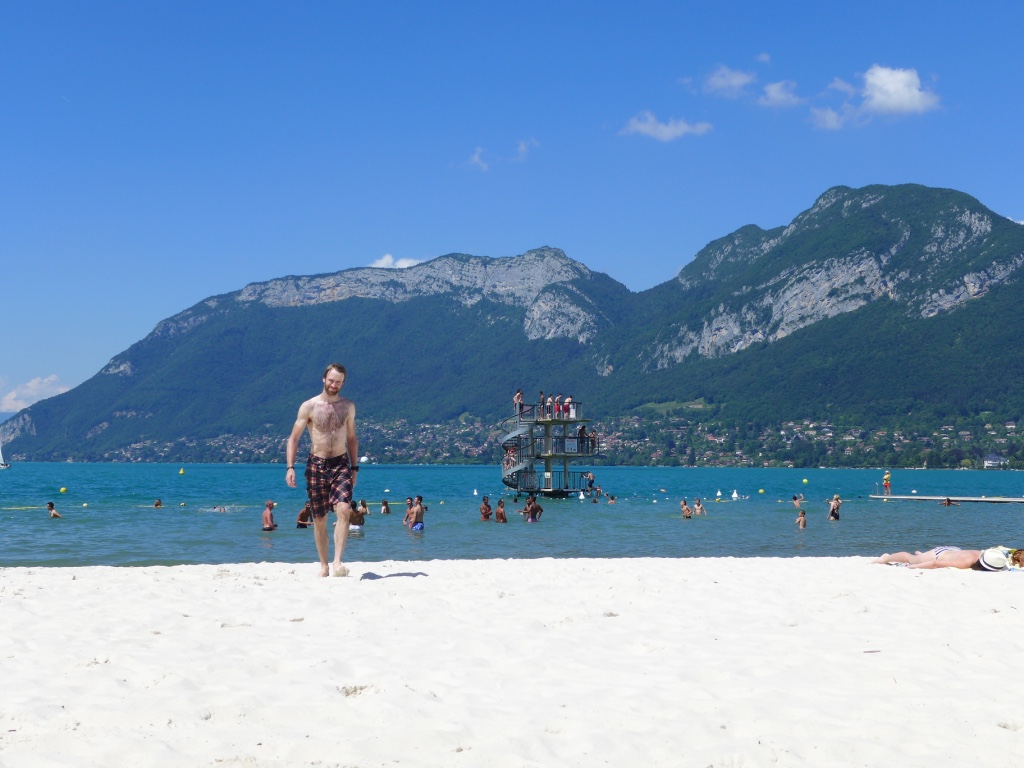 Audun on the beach in Annecy
After getting slightly too much sun, we pedaled the final kilometers into Annecy, and walked around the old city in search of raclette. Because, cheese for dinner! 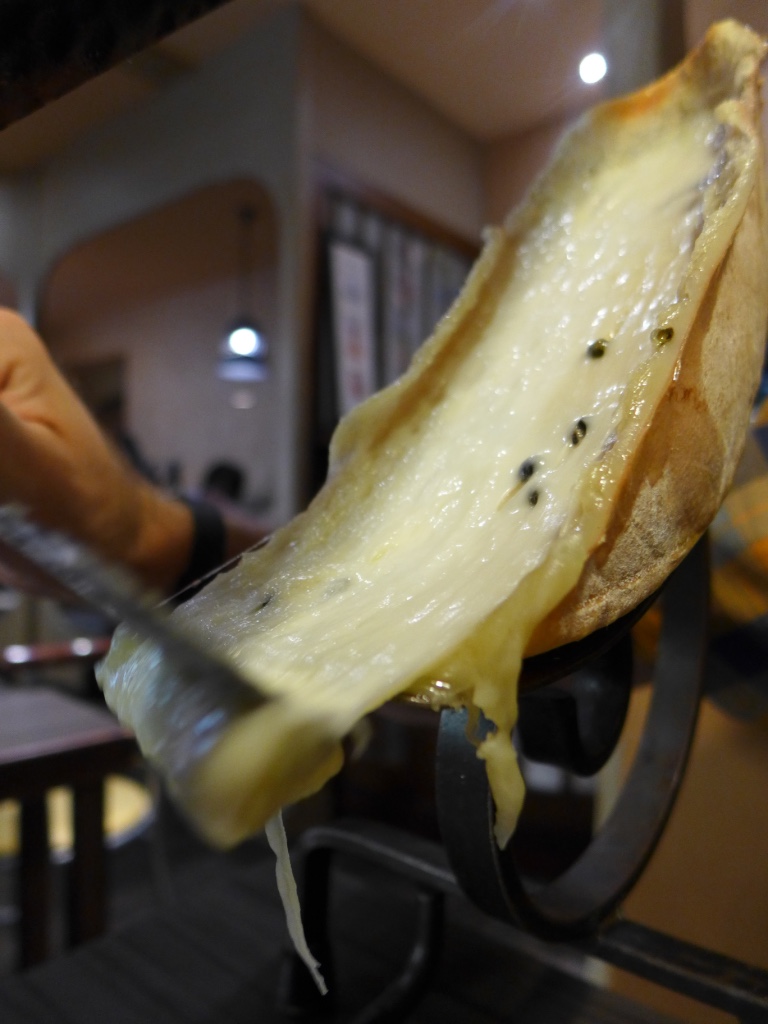 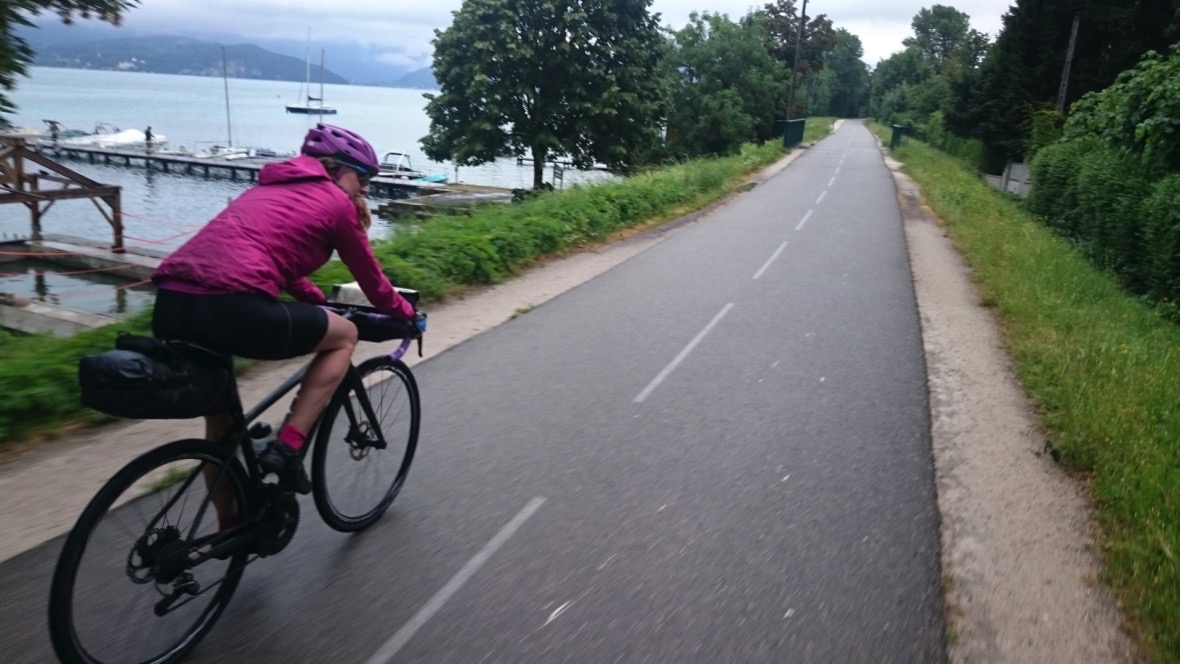 Rolling along Lac d’Annecy.
We started the day with a moderate climb over Col de Leschaux. It was a grey, dreary day, and we didn’t see much of the mountains. My legs were significantly fresher after the easy day in Annecy. 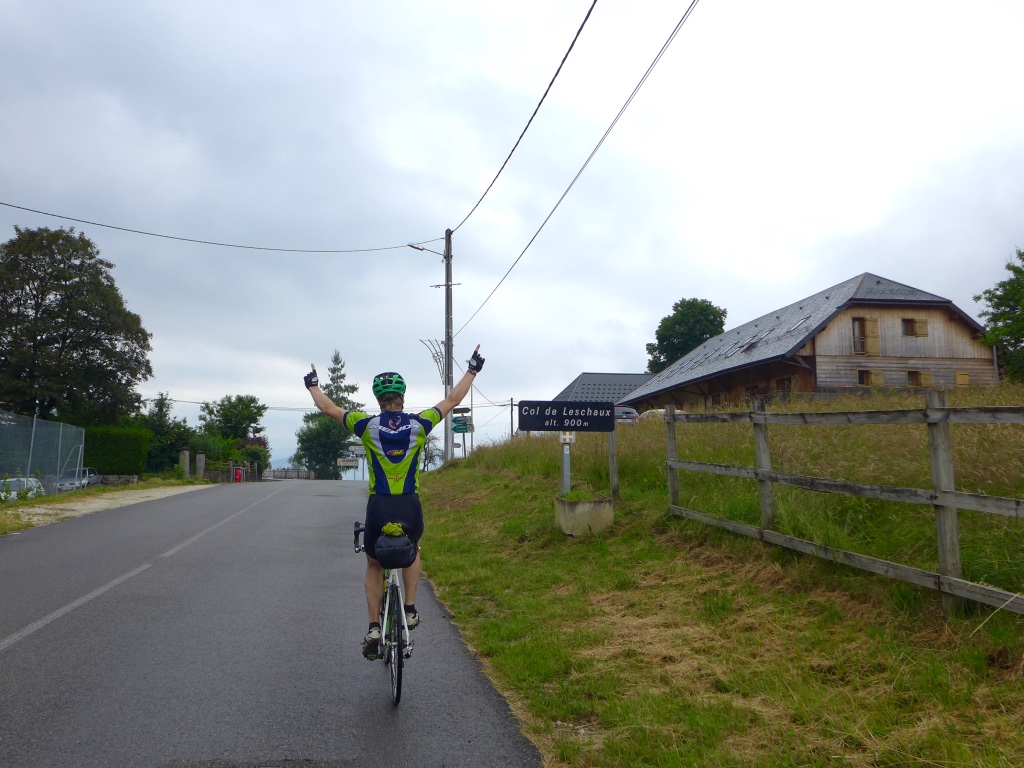 Audun crests over the last big climb of our trip, Col de Leschaux.
By the time we reached Aix-les-Bains, it was clear that the circuit of Lac de Bourget wasn’t going to be nearly as scenic as we had hoped. The mountains were shrouded in clouds.
“We could just ride to Geneva!” I suggested to Audun, half-joking. The look on his face made me realize that this was just stupid enough to sound fun to him. Geneva was 90 kilometers from Aix-les-Bains. A quick stop at the store in Aix-les-Bains to load up on snacks, and we were cresting through the rolling hills towards Geneva. I alternately regretted and thoroughly enjoyed extending our ride for another four hours. 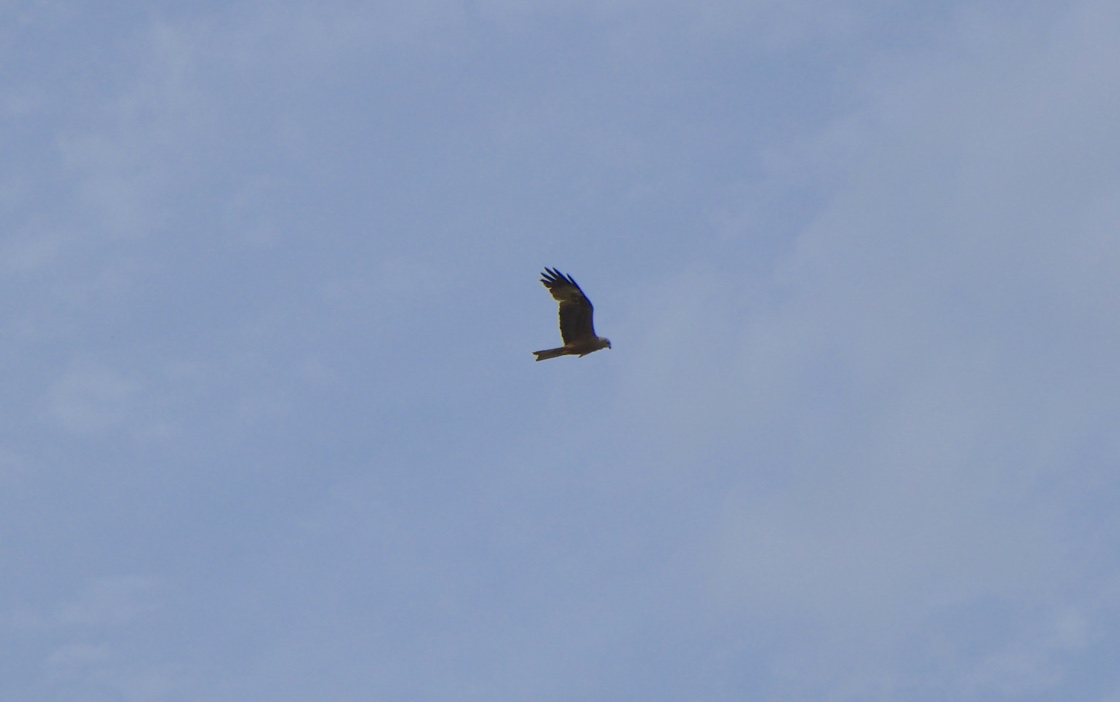 A kite seen on the road to Geneva.
It takes a certain kind of stupid to ride an extra 90 kilometers when you could take a perfectly nice train to Geneva. I’m glad Audun has just as much of that stupid as I do.
- The Wild Bazilchuk
Labels: alpe d'huez bike touring france mountains road biking