I have many failings as a road cyclist. The doctrine of the road cycling way and aesthetic is (half-)jokingly documented in these famous rules, and it’s safe to say I’ve broken pretty much every rule in the book. I still, even after owning a road bike for four years, use mountain biking pedals and helmet (gasp!). I am terrible at drafting, and I have been know to order lattes. As far as I can see, my only redeeming quality as a road cyclist is my utter refusal to let bad weather stop me. I quote, rule #9: If you are out riding in bad weather, it means you are a badass.

During the long weekend for Norway’s Constitution Day, May 17, Audun and his dad Odd Arild officially joined the club. The forecast was pretty atrocious for the next day, but we had driven 8 hours from Oslo to Sunnmøre with our road bikes, and we would not be kept from riding by a little rain! Audun just bought a new road bike, and was excited to share some time on the tarmac with his dad, who is a rabid road cyclist himself. We decided that nothing would do but that we cycled to Geiranger and back, even though the forecast was calling for snow in the mountains above Geiranger.

Geiranger is a tiny village in the inner part of Norway’s steepest, most dramatic fjord. On a summer day, it looks something like this: 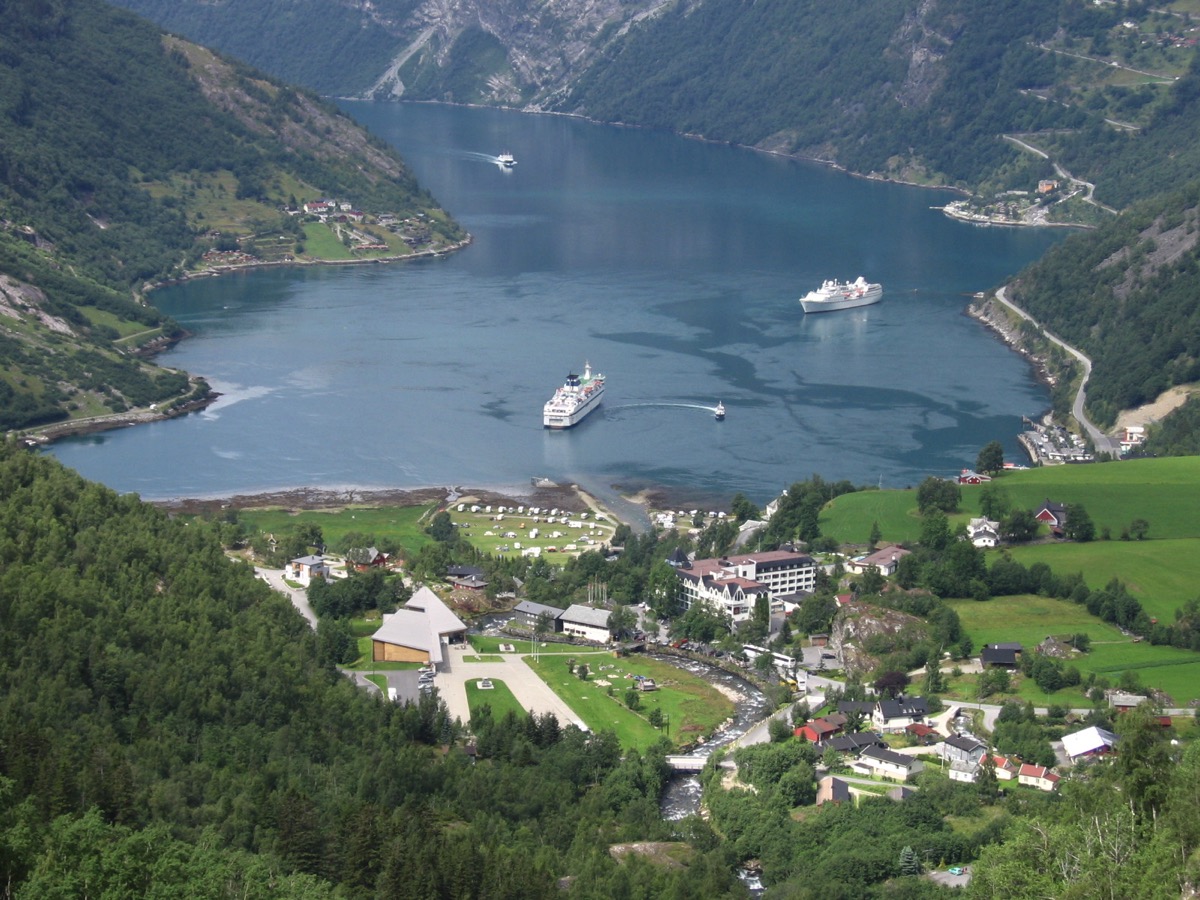 Note the steep switchbacks in the upper right of the picture. That is the Eagle Road, which we would descend to Geiranger before turning around and climbing back up.

We set out in full bad weather attire, with rain pants, shoe covers, long fingered gloves and buffs covering us from head to toe. After an initial chilling descent from the perch far above the valley where Audun’s grandsmother’s farm lies, we start to climb up the backside of the Eagle Road and were soon shedding our rain jackets.

The climb was gently graded, and we pedaled up past lush farmlands into increasingly mountainous and craggy terrain. This is my favorite kind of road biking, rolling through beautiful, mountainous places and experiencing them so much more intensely than you would in a car. 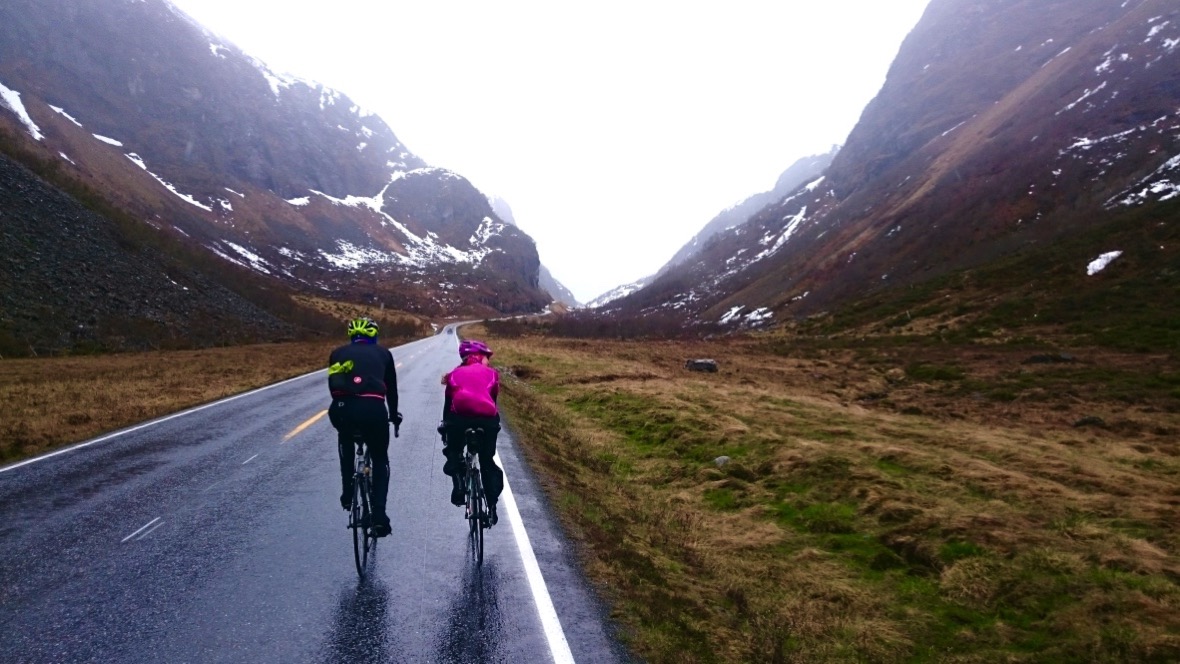 Odd Arild and I enjoying the mountain scenery. Photo by Audun.

Soon enough we were at the top of the Eagle Road road, looking straight down at the dozens of switchbacks than lead steeply to the fjord. As the forecast promised, it had started snowing. Big wet flakes that fell lazily through the air before disappearing when they hit the black asphalt. We put on all of our layers again and cautiously rode the switchbacks down to the fjord. 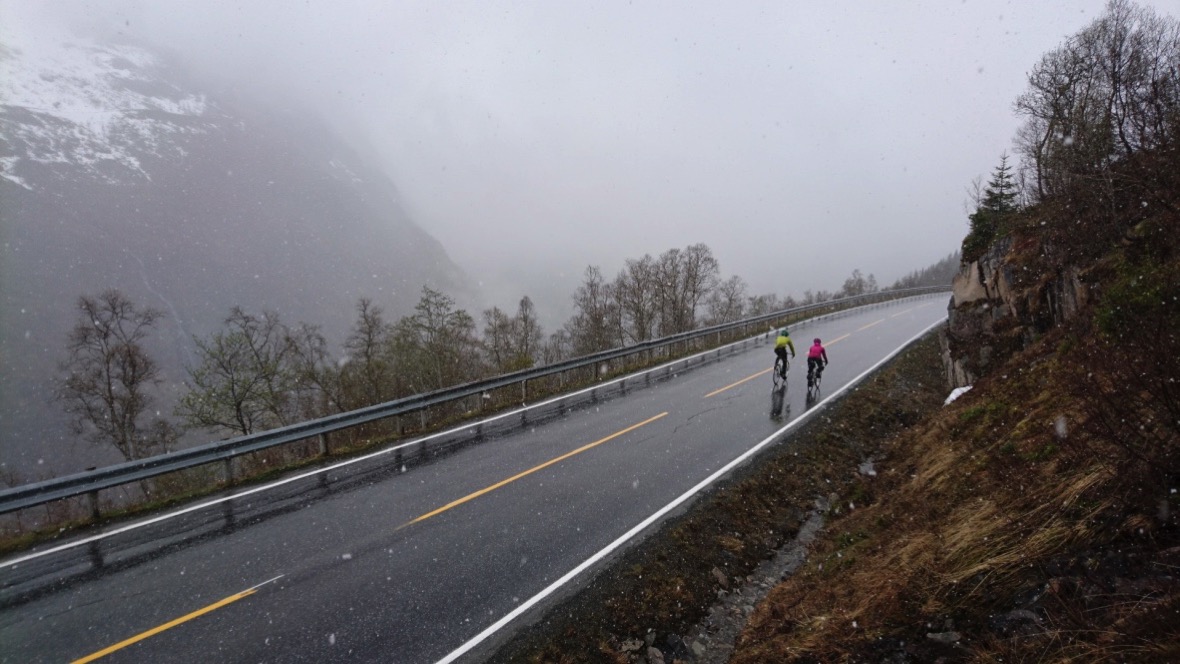 Audun and I descending the Eagle Road in the snow. Photo by Odd Arild

By the time we reached the bottom of the chilling descent, I was soaked through and so cold I could barely cling to my brakes. We stopped at a small bakery and sat down practically on top of the heater, slurping mediocre coffee from paper cups while we wolfed down sandwiches, cinnamon buns and waffles.

And then it was time to turn around and do the whole thing in reverse. It had cleared off considerably as we set off up the switchbacks. I was entertained to note the goat pasture carved out in the at least 30 degree slope between two switchbacks. People from Sunnmøre will build a farm nearly anyway! 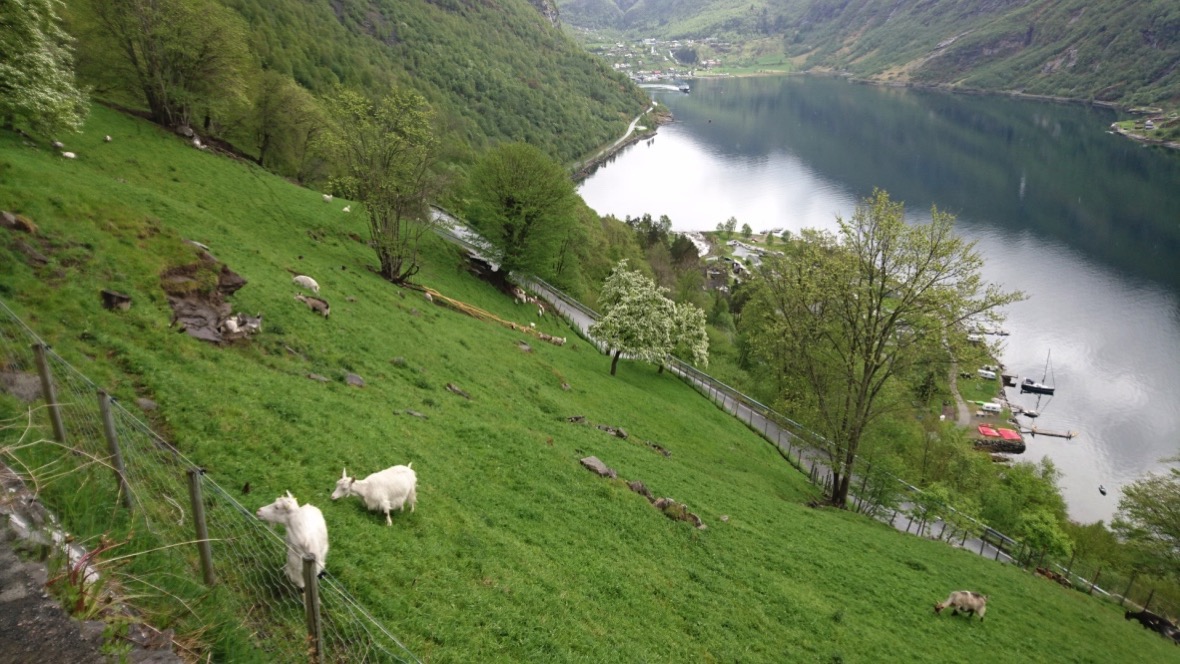 Goats enjoying the view of road cyclists head up the Eagle Road. The village of Geiranger can be seen in the background.

We started at a leisurely pass, spinning on our lowest gears and chatting. But then another guy on a road bike passed us, briefly biking along side to say hi. I decided I wanted to go a little harder, and I used the man ahead of me as a rabbit. 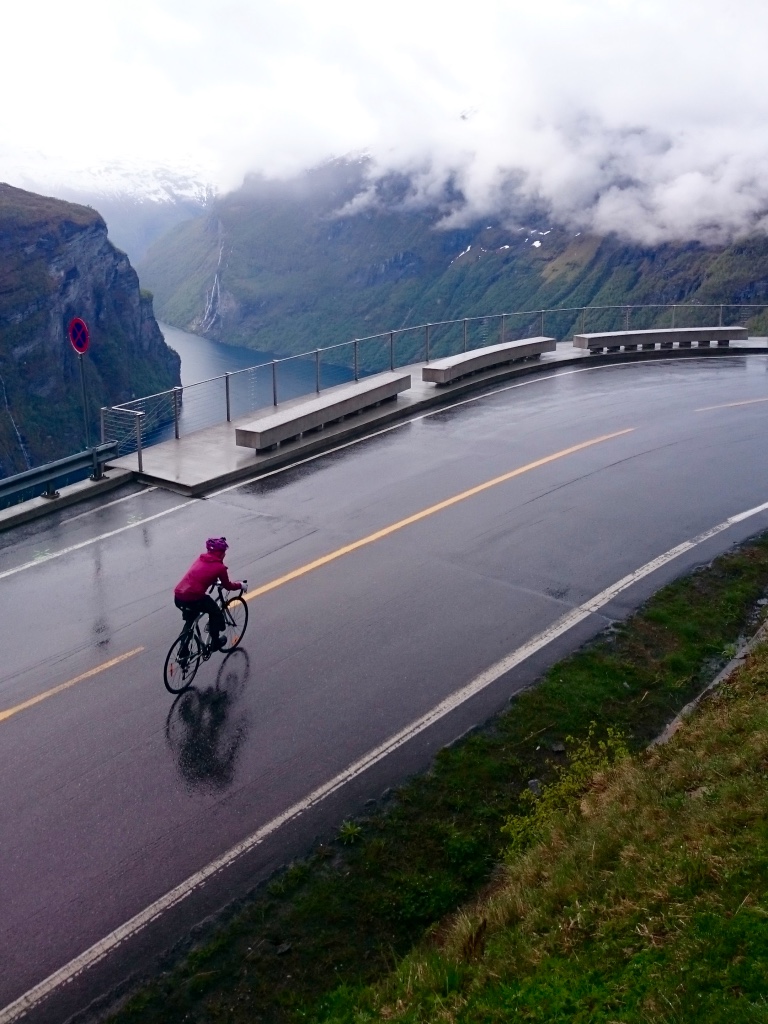 The Eagle Turn, with the fjord far below. Photo by Audun.

I worked hard the rest of the way up the Eagle oad, never quite catching the road biker who had passed us but reeling him in on occasion. I later regretted spending so much fuel on the climb, when we had to ride the final climb up to Audun’s grandmother’s farm. I was so spent I couldn’t keep up with Odd Arild and Audun any more, although I later learned they were actually pushing hard on this final climb. Strava data here. 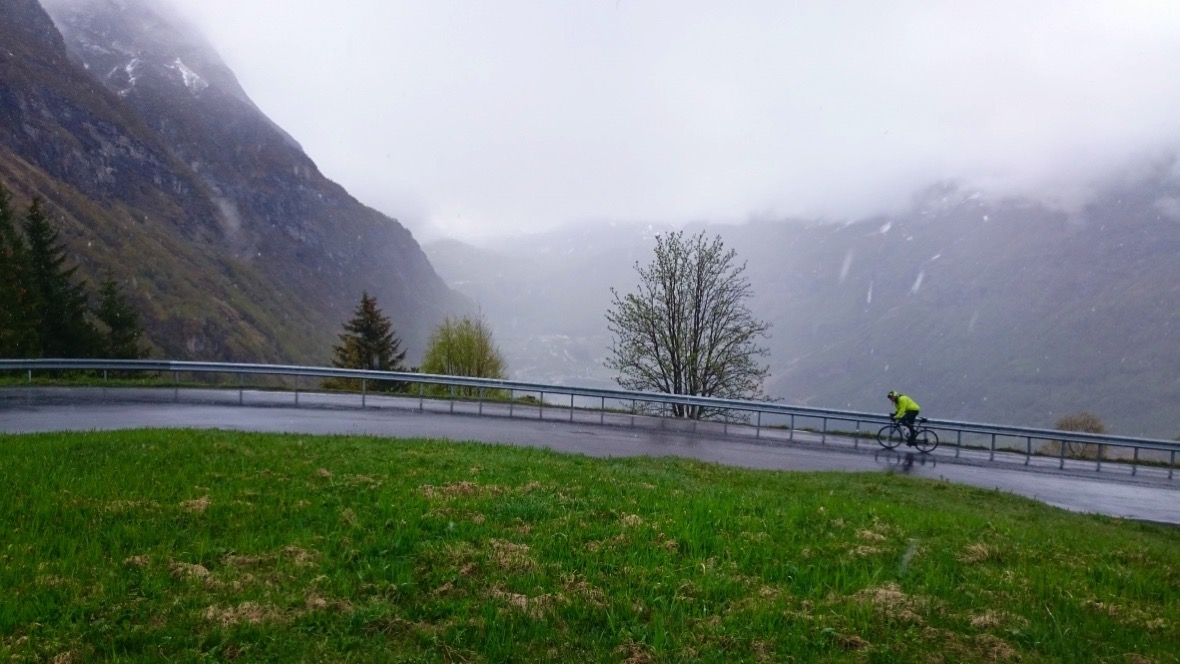 Odd Arild near the top of the Eagle Road. Photo by Audun.

A few days later, it was Norway’s Constitution Day, May 17! In lieu of a more traditional celebration, Audun and I decided to take advantage of the fact that we were heading back towards Oslo. We would start riding our bikes across the mountains, and Audun’s brother Vebjørn, who had carpooled with us, would take the car and catch up with us at some point down the road. We told him to start driving 3 hours after we left, which, we hoped, would give us a good long ride before he caught up to us.

Given the festive occasion, we attached Norwegian flags to our bicycles and set out towards Geiranger, following the same route as a few days previously. 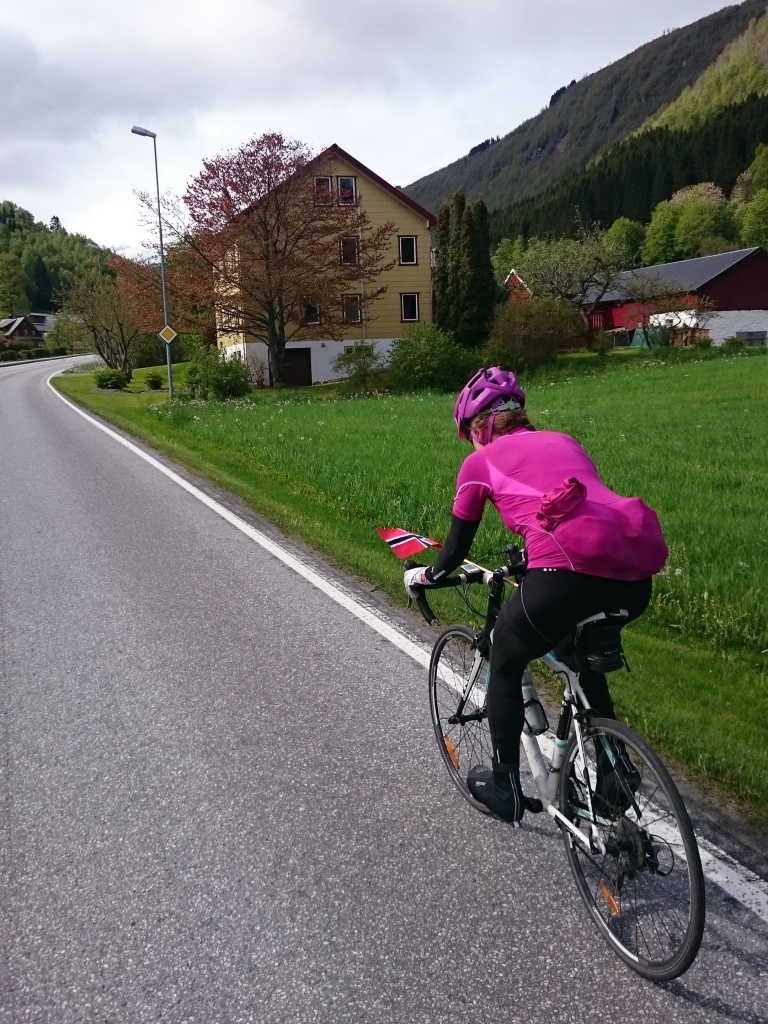 Enjoying the sun in Eidsdal, at the beginning of the first climb of the day. Photo by Audun.

It was sunny and pleasant this time around, although clouds still lay on the mountain tops above us. 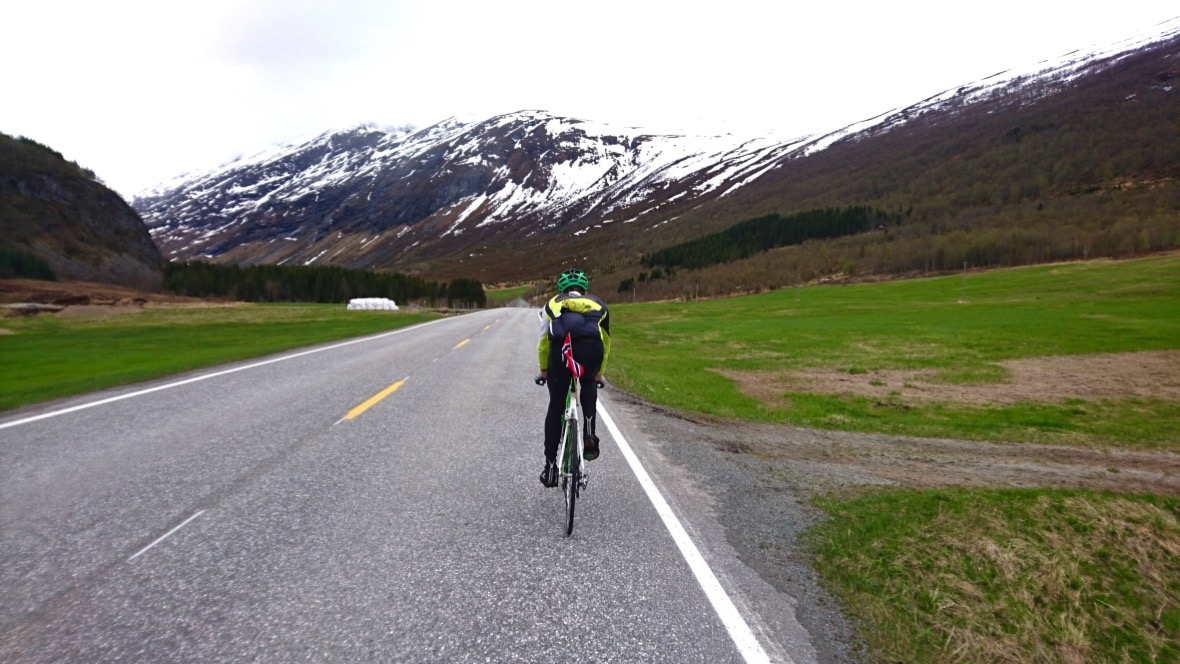 Audun placed his flag slightly more aerodynamically than me.

A large cruise ship was docked in Geiranger and there were literally hundreds of tourists loitering around in the tiny town center. Norwegians, dressed in their bunads for Constitution day, walk through the streets, in strange contrast to the causally dressed tourists snapping photos around them. And then there was us, two dweebs in full cycling attire, stopping to buy a hotdog before we left Geiranger for the next big climb. Lush Geiranger on May 17th.

We started on the switchbacks out of Geiranger, pacing ourselves for what we knew would be a long climb to Djupvasshytta. We had stopped in Geiranger for longer than I expected, and I was looking nervously at my watch, trying to calculate how far we would get before being caught by our car. 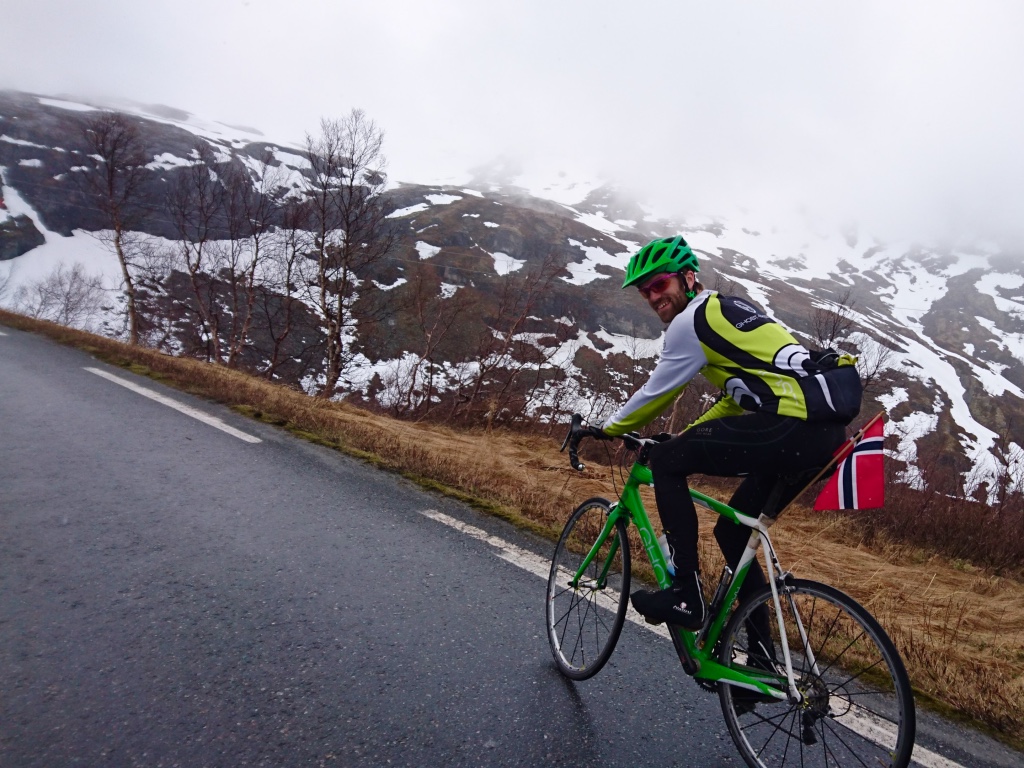 In the beginning, a train of tiny electric cars that tourists had rented in Geiranger zoomed by us. We kept catching them, since they stopped at every scenic viewpoint and we didn’t. Eventually the electric car tourists got sick of ascending into the fog and turned around, leaving us virtually alone on the long mountain road.

Caution! High risk of rock slide! Don’t stop!, a sign warned us. So we pedaled on, passing occasional high banks of snow where the narrow strip of asphalt had been carved from winter’s clutches by a snow plow. 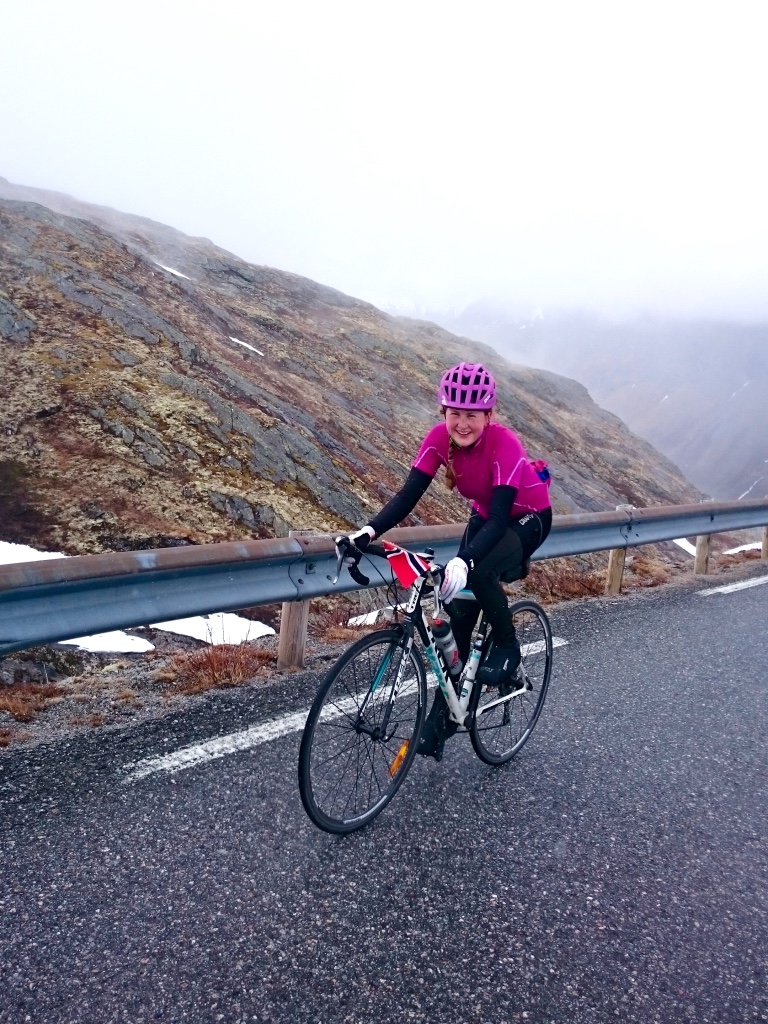 Are we there yet? Photo by Audun

I love a good, long climb, I thought to myself. Soon enough, we were at Djupvasshytta, 1000 meters above the fjord in Geiranger, and sun was penetrating the fog. 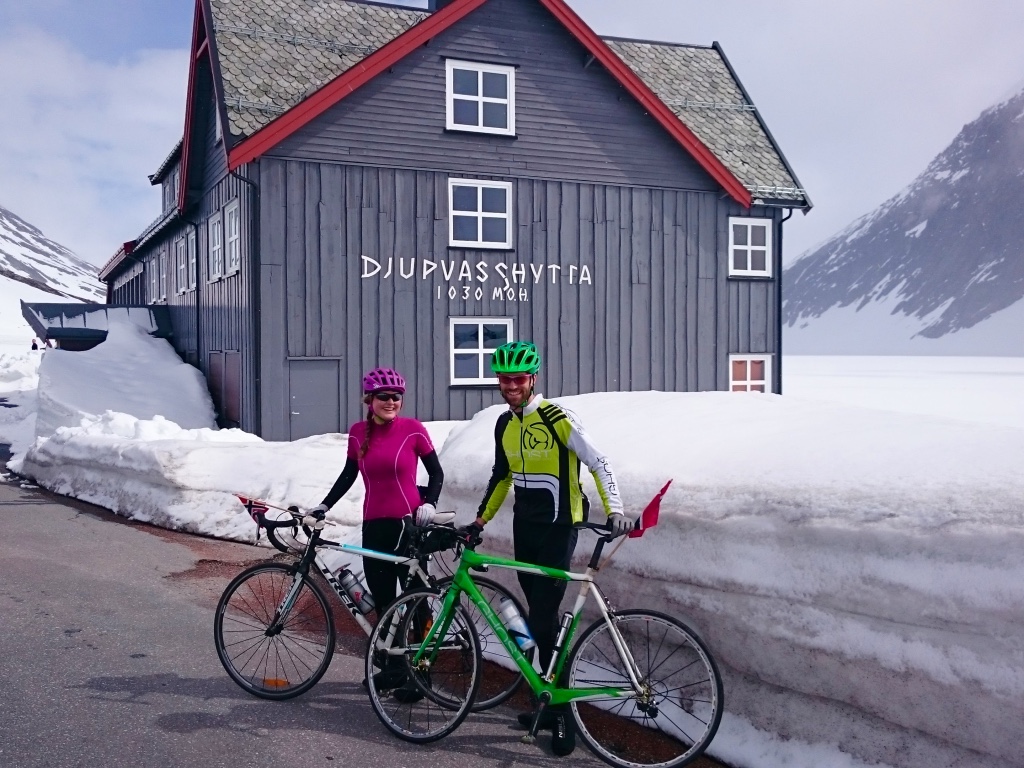 Group photo at our high point of the day.

The road from Djupvasshytta was a gentle downhill, making for extremely fast going. We were able to average close to 40 km/hour down from the top. When Vebjørn finally caught us in the car, we had ridden 99 kilometers and beg to allowed to make it past 100. In the end, we rode 103 kilometers from Norddal, a little less than a fourth of the long road home to Oslo. It was time to sit back and indulge in many ice creams, another time-honored May 17th tradition.