As unusual as it is, I find myself penning a race report for the second time in less than seven days (read the first here!). For easy perusal, this race report has four parts, with the following subtitles: Anticipation, How can I possibly be this slow?, Oh well., and Pedal to the Medal. Enjoy.
Part 0: Anticipation (no kilometers, well except for a few during my warm-up)
Birkebeinerløpet, which took place on Saturday, is a trail half marathon that is a sister race to the famous Birkebeiner ski race. Every year it attracts thousands of participants. It’s rare to see an event of this caliber and size on trails, but if there’s one thing the Birkbeiner people are used to dealing with, it’s crowds!
I had high expectations of myself going into the Birkebeinerløpet. I knew I was fit, and I was frustrated a having not been able to use the extent of that fitness at Oslo Ecotrail. Based on a multipart analysis of Jack Daniel’s VDOT formula, the fastest women’s times at Birkbeinerløpet from the previous years and their corresponding road half marathon times (yes, I am both a nerd and a PhD student, own it!), my A goal was to run the course in under 1:40. Still, I had a nagging ache in my hip flexor, a pulled tendon of some sort, that I was afraid might cost me my race.
Mom was also running the race, and Dad had signed up for the shorter, 12K event. Our start times were staggered throughout the day, and since I had the la
test start time, I spent a lot of time milling around in the morning. I checked the results as Dad raced, and was pleased to see that he took 8th place in his age group. I went to meet him at the finish and race expo, where I decided new sunglasses in order.
“They’ll make you go faster!” claimed Dad.
I certainly hoped so. 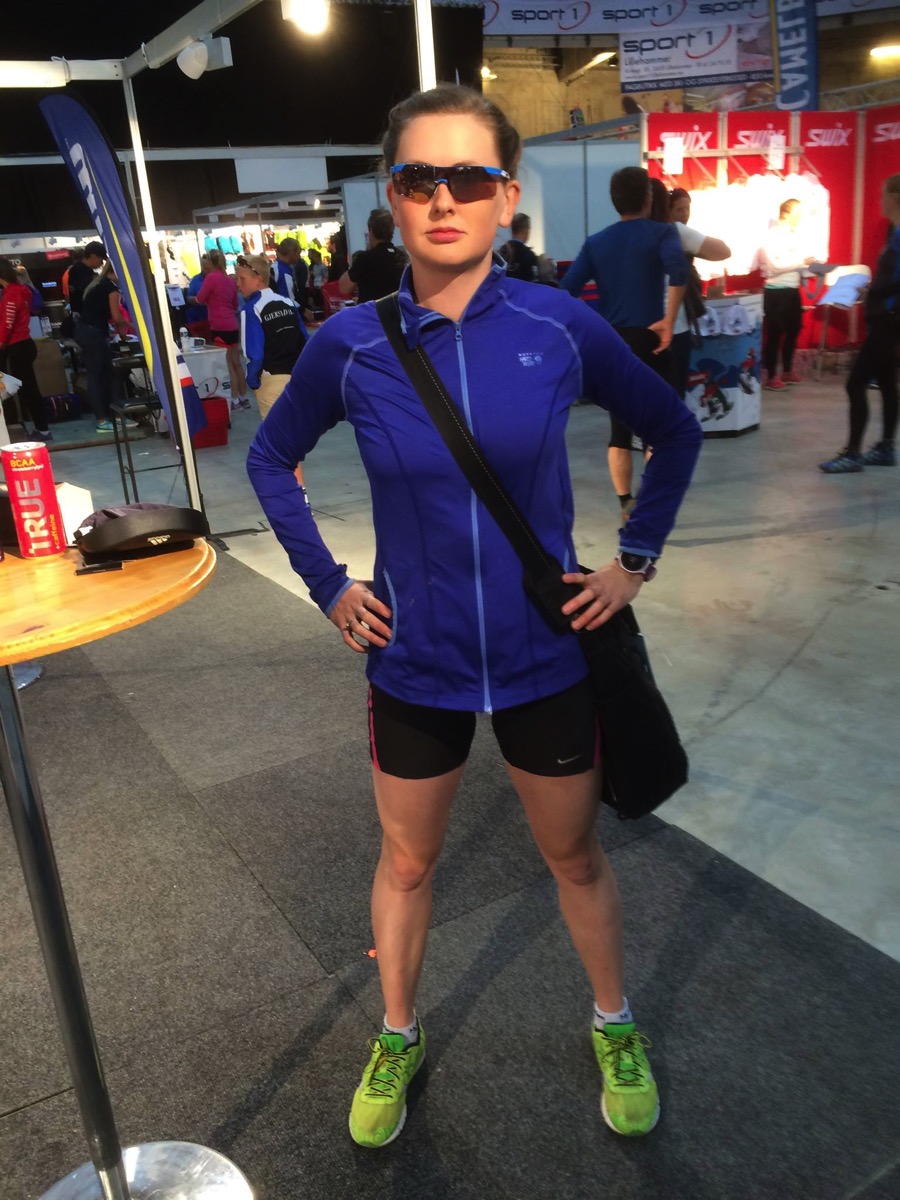 Fast glasses? We’ll see. Photo by Dad.
I took the shuttle bus to the start arena an hour before I was due to start and was happy to have plenty of time to warm-up and eat some last minute snacks, consisting of smoothie and a Snicker’s ar. I watched Mom’s splits online as I waited and was pleased to see her go through 15K before I lined up for start. I wouldn’t have time to find out about her finish until later.
In uncharacteristic fashion, I lined up towards the front of my starting wave, which consisted of a couple hundred people. The race organizers asked you to predict your own finish time in order to place you in an appropriate wave, and I had decided, perhaps unwisely, to start with the 1:44 group.
Here. Goes. Nothing. I thought as the person on the loudspeaker counted down to the start.
Part 1: How can I possibly be this slow? (0-10K)
I accelerated slowly, and tried not to get caught up in the current of people rushing past me. I was being passed left and right, but I actually liked not having to pass people for once. I found a comfortably hard pace as we charged around Birkbeiner Stadium and headed out into the woods.
The first section of the course was in rolling terrain, and I had a basic plan to try and stick to 5:00 min/km pace. As we hit the first hills, I saw that pace come and go. These hills were steep, and given the length of the race I didn’t find it wise to charge up them as hard as I could. I think I walked at least three times during the first 4K. I kept thinking the terrain would get easier and my pace would get faster, but I just saw my average pace getting slower and slower.
I was surprised at the technicality of the trails as well. Based on my experience on the last section of the course, which is the same as Ultrabirken, I had decided to wear my road racing shoes. But I found myself working to stay upright on muddy patches and off-camber doubletrack. Bad choice. The hundreds of participants running in the vicinity of me churned up dust on the trails, and I felt it mixing with the sweat coming off my temple. The sun beat hot down on us all, and I happily gulped sports drink at the aid stations.
I was passing people on the short sections of downhill, only to be caught again on the uphills, unwilling to work hard to stay ahead. Glancing at the pace on my watch far too often, I wondered how I could possibly be this slow. Maybe I was sick? Maybe I hadn’t slept enough? Maybe it was too hot? Maybe I was just having an awful, terrible day?
I sucked down a Strawberry-Kiwi gel after 8K and gagged at the burning sweetness. Half-marathons are stupid. Maybe I’m just really bad at this, I thought woefully.
Part 2: Oh well. (10-15K)
After 10K, I stopped looking at my watch so much. It was just too depressing. You can still run under 1:45! I told myself. Just keep going. I was entertained to see some Ultrabirken runners stumbling through the last section of the course. I kind of envied them, they didn’t have to run nearly as hard as I did. Not all of them looked like they were having fun though. Sixty kilometers is a long way.
Then, in typical schizophrenic Norwegian weather fashion, it started to rain. First a few drops, then a full on rain shower. “This is not what I signed up for!” I joked to a man running near me. Still, the rain cooled everything off, and the dust was settling. Rain drops rolled down my face and into my mouth, tasting of the sweat of the first kilometers.
With the pressure of following a strict pace gone, I settled in and found myself enjoying the actual running part of the race for the first time. The course started to incline inexorably downhill, alternating between double track and dirt roads. The rain shower passed, leaving behind only the bright sun and some spots of dried raindrop on my new sunglasses. In my new, relaxed state, the kilometers ticked by.
At the final aid station at 15K, I saw a display showing that I had been running for 1 hour and 13 minutes. A few quick calculations left me elated: even if I only ran 5:00 min/km for the rest of the race, I would still finish in 1:43! Maybe I wasn’t doing terribly after all!
Part 3: Pedal to the medal (15-21K)
It was then I decided it was time to turn on the afterburners. I started to charge all the downhills with reckless abandon, passing people left and right. I felt two of my toes rubbing together, the dirt that had sifted into my shoe functioning like sandpaper. Still, I could ignore it, unlike the ungodly side stitch demon during Ecotrail. I had more important things to think about. I had acquired a shadow, in the form of a woman in a pink shirt who tried several times to pass me. 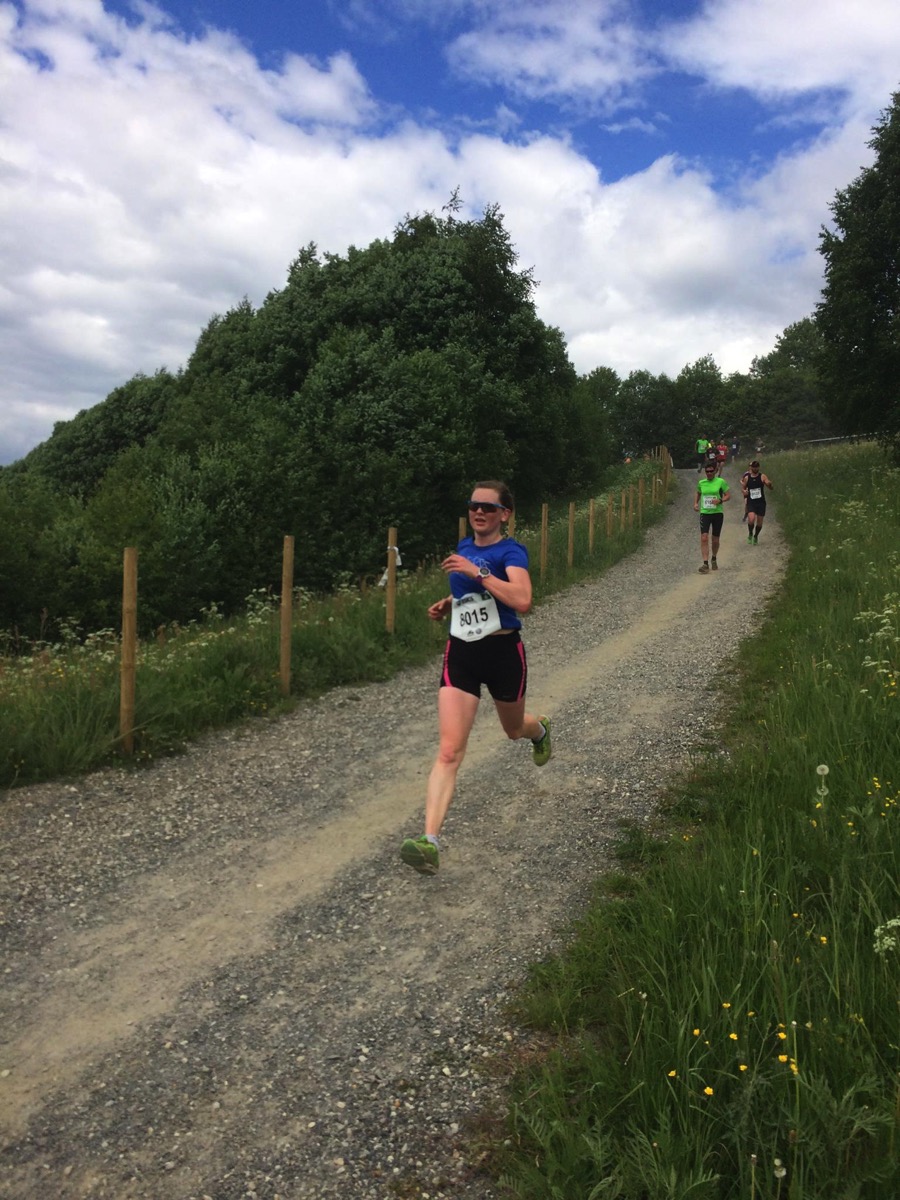 Charging the downhills. Race face: on. Photo by Dad.
Oh no you don’t! I thought to myself, speeding up even more. It soon became clear that neither of us was going to shake the other off, and she drew up alongside me.
“Thanks for pushing me to run so hard!” I told her through deep gulps of air, actually meaning it. I noted that her bib had the same color as mine - we had started in the same wave.
“Yeah, being fast on the downhills is definitely an advantage on this section!” she answered, “You know, if we keep pulling each other, I think we can go sub 1:40!"
Sub 1:40?! I had given up on that dream long ago. But I had lost track of how long we had been going for, and if she said we could do it, I would be damned if I let that time go.
So we alternated pulling, pushing each others pace harder and harder. I was pulling away on the short uphills, almost sprinting, but she was starting to leave me behind on the downhills. I finally lost her on the last downhill to the finish, but I had saved enough to make the victory lap before the finish a full on sprint, passing several other people in the last few hundred meters.
My official finishing time was 1:39:24. Although Strava counted this run as under the half marathon distance (20.3K in fact!), I still know this is a strong time. I came 31/250 woman in my age group, and beat 10 of the women who had started in the elite field. 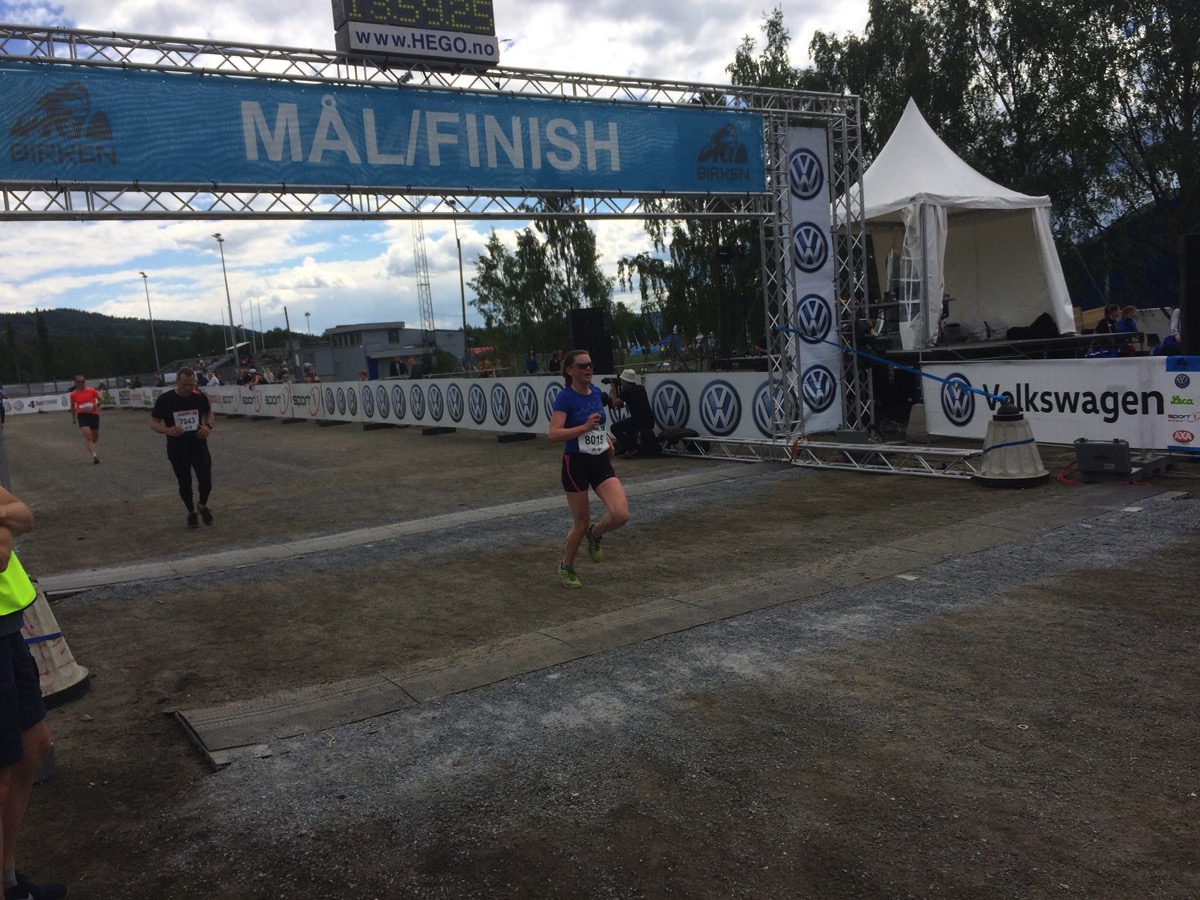 The men behind me are busy eating my dust. Photo by Dad.
My hip flexor was fine. The sandpaper feeling between my toes turned out to have been most of the skin on the inside of my toe ripping loose (Gross!). I hobbled around afterward, grinning like I had won the race outright. In some ways, I had.
- The Wild Bazilchuk
Labels: norwegian summer races running