Preface: Tomorrow is Birkebeinerløpet, which will be my first ever half-marathon. I’m kind of nervous (as usual), partially due to my high expectations of myself (as usual) and partially due some lingering pain in my hip flexor (not usual). The hip flexor issue started about two weeks ago, but it doesn’t seem to be the ‘bad’ kind of pain, although it’s definitely exacerbated by running. Of course we’ll see how bad it gets during the race tomorrow. *Nervous laugh*. Anyway, on to the race report!
An uphill race is a borderline ridiculous proposition, yet sometimes I find myself drawn to them time and time again. Oslo Bratteste - 'The steepest in Oslo’ and Fjellseterløpet in Trondheim are two that have appeared on this blog. I often jokingly claim that I’m drawn to the pain involved in these races, but the reality is I love their stripped-bare nature. You cannot fake your way through an uphill race. There is nowhere to hide, and you can throw everything you have into the hill. It’s a kind of soul-baring experience, transcending the monotonous predictable of the everyday. I race uphill to see who I am.
In the ongoing effort to combat my race nerves, I signed up for the first in a series of uphill races on my local trails in Oslo on Tuesday. Although I had run in the area before, I wasn’t sure exactly where the race course went, so I was glad to have time to jog the first couple kilometers before lining up to start. The race was of the informal type, just a bunch of people lining up at the start of a dirt road through the forest with timing chips. I made sure to line up behind the women dressed in only sports bras and lycra who were clearly in it to win it, but tried not to start at the very back. 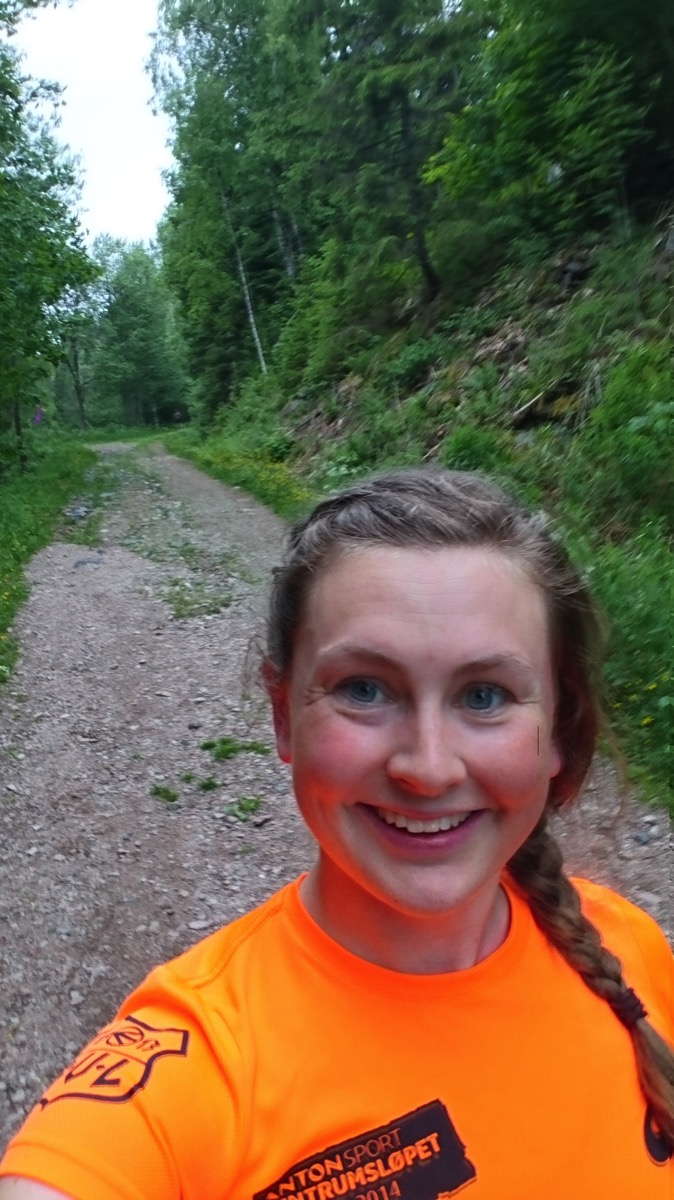 Selfie on the first portion of the course, during my warm-up jog.
Kilometer 1 (4:54, HR 169): I didn’t want to start too hard, so I fell in behind a woman in a red singlet who seemed to be running at a reasonable pace. As usual, all of my pre-race jitters disappeared the moment I started racing. The first part of the race was on undulating dirt road, and was all runnable. I felt comfortable, but knew it this was bound to get harder.
Kilometer 2 (6:27, HR 188): The dirt road continued, but did steeper and steeper rollers. Red singlet woman set a hard pace up the hills, but I was determined to cling on. The race was only 4K after all, and I wanted to leave it all behind on the course. We were getting pass left and right, but I decided I couldn’t care about all those other people. I was going hard enough for me and that had to be good enough.
Kilometer 3 (8:19, HR 189): The course left the dirt road and hit rooted, rocky, and occasionally wet singletrack. It felt like coming home; I was in my element. The trail steepened so much that all the racers near me started to powerhike, heads hanging and arms swaying. Something inside of me shifted. It was close to instinct, a feeling so automatic I had no choice but to obey. Go! it said. This is your moment. Pass them. Crush them all. So I went. Hiking as efficiently as I know how. Ducking around other panting racers, picking up my feet and forcing myself into a run any time the trail flattened. The third kilometer seemed to take forever, and I guess compared to my pace on road races it basically did! 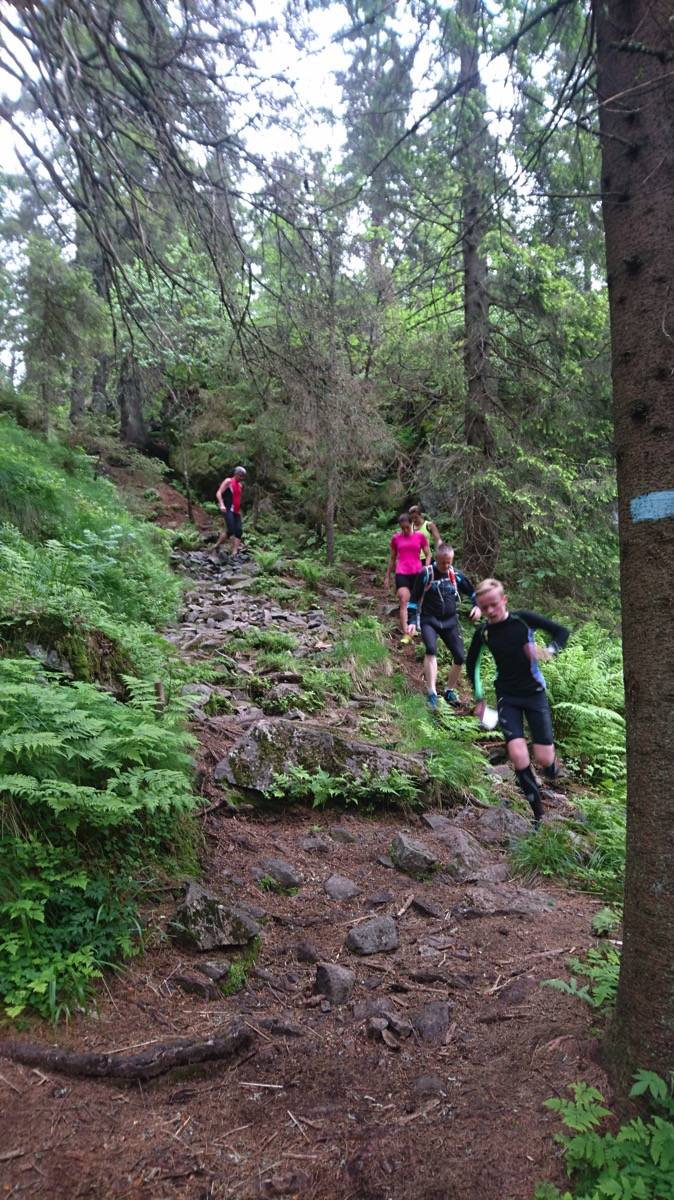 A technical section of the course, taken during the jog down from the top.
Kilometer 4 (8:35, HR 188): Although I was still reeling in racers, I was starting to feel the effect of nearly 20 minutes on or near my lactate threshold. The trail grew increasingly technical, alternating betweens jumbled rock gardens and dropping steeply to small creek crossings that had to be leaped. Watch the ground, stay on your feet! I told myself. I was having a little trouble breathing, coughing as I overtook a man in a grey t-shirt. I glanced at I my watch, noting that the finish line was only three hundred meters away. The trail was suddenly a steep wall of slippery rock, and I grimaced, putting everything I had into powering over the rocks. As I rounded a bend to the final stretch to the top, the grey t-shirt man caught me again in his finish sprint. Laughably, the final 100 meters were across a bog which sucked you ankle deep into the peat. 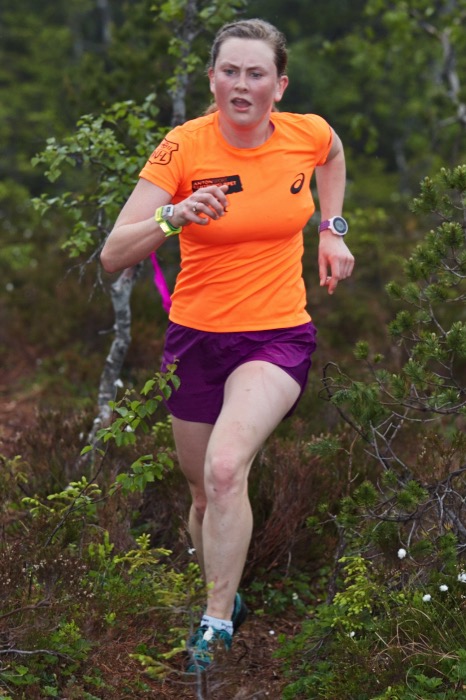 Finish sprint. Photo by Stian S. Møller for Kondis.no
I crossed the finish line in 28:44, elated to have had such a successful race. I loved the ridiculousness of the course; it just kept getting harder and harder, and I hope I come back next year to throw myself at Mellomkollen again.
Results here. Strava here.
- The Wild Bazilchuk
Labels: adventures this week oslo races running stupid ideas