It took six weeks of slow rebuilding before my right foot finally felt completely better after I injured it during my mountain escapade. Six weeks of slowly gaining momentum.  with my foot on my mind with every step I took, gingerly gauging. Will it start hurting again now? What about now? I was indescribably grateful for every kilometer. My functional range slowly expanded and I was able to soak in the views in the high places in the forest in Bymarka and enjoy those late summer mornings. 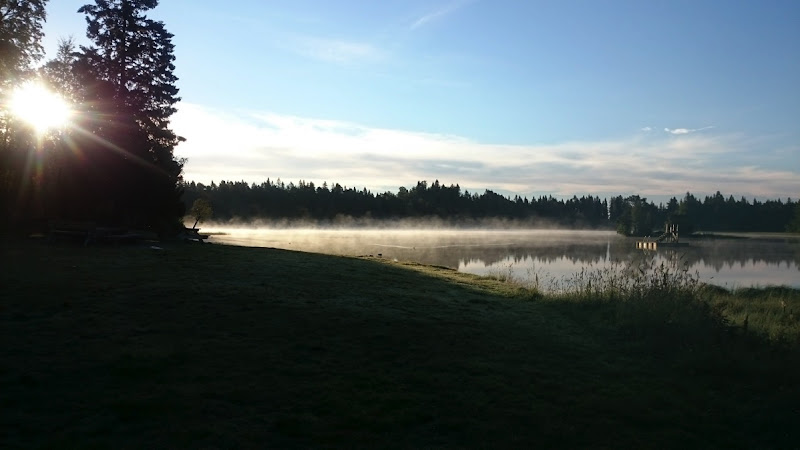 Then came the time to pack up all of our things and move from Trondheim back to Norway’s capital, Oslo. I complained a lot about the move, but the fact is I have moved a least once a year since 2009. Hopefully this time it will stick - for all intents and purposes I should be based in Oslo at least the next two years.

The weekend after moving to Oslo, I finally decided that it was time for a Long Run. It was with some irony I realized that my first long run after my injury would be on the same day as the Ultravasan 90K, which I had decided not to start.

I designed a point-to-point run which involved taking the train along the border of Oslo’s public forest for about 15 minutes to get to the start point. I love using public transport like this, to allow me to see areas that I wouldn’t see just running from my house. I started early, and although it was a beautiful Saturday, the forest was mine, only mine, for most of the run. 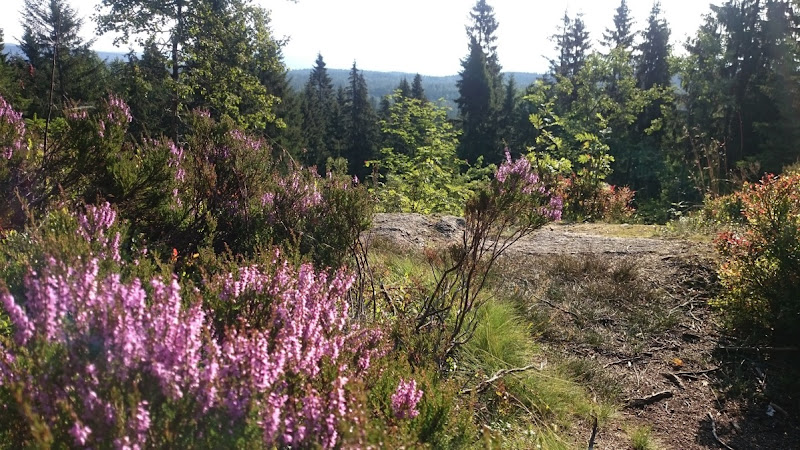 My route had me running over the picturesque spine of Barlindåsen before dropping into a labyrinth of steeply undulating technical trails. I was glad when the trails finally spit me out on a dirt road and I could let my legs run on there own, without all the concentration technical trails require. I looked at my watch and realized I could have been nearly 4 hours into Ultravasen 90K, had I chosen to start. I was running 21 kilometers today; could I have done 90? I wondered what I would have been thinking about. I wondered if I would have been eating enough. Probably not, I never seem to be able to eat enough while running. Was I a coward for not going to Sweden and at least trying? Or was I smart for not risking many months of injury?

In the end, I had been more afraid of not being mentally prepared to run 90K than physically. I couldn’t start the race doubting myself; there would have been no way I would have finished! You have to start with the conviction that you are able and ready. And after finishing my long run, I was glad I didn’t have 70 more kilometer to go. Maybe I had lost some endurance in my down weeks. 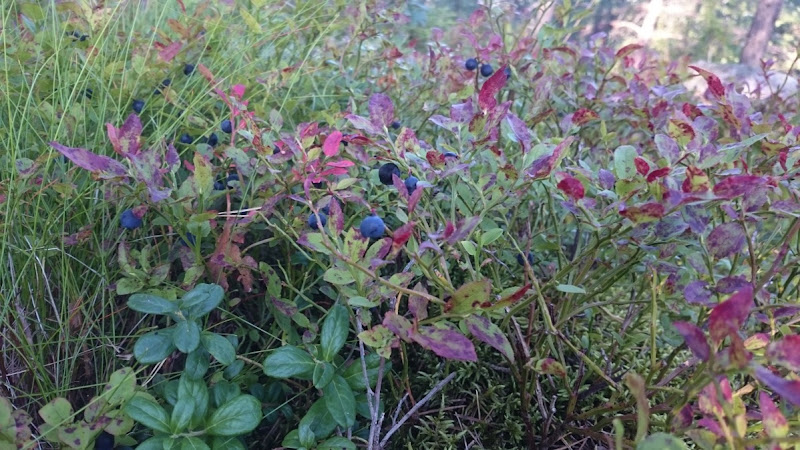 Free range, organic blueberries are the ultimate running snack. They are probably a superfood or something.

So what’s next? I’ve been casually training for a 10K in October; by casually I mean I started running intervals and stuff, and then immediately got a nasty cold. I’m still battling some remnants of coughing and congestion, and am currently unable to run hard without my throat closing up. Fun times!

I read somewhere that one should consider ones training like the Great Wall of China. The Great Wall is enormous and consists of some ungodly number of bricks. Every time I go for a run I imagine I'm placing another brick on my Great Wall. So bad days aren’t so important; if you skip a run that’s just one tiny brick. It’s the sum of all the runs, the consistency, that will build the Wall. 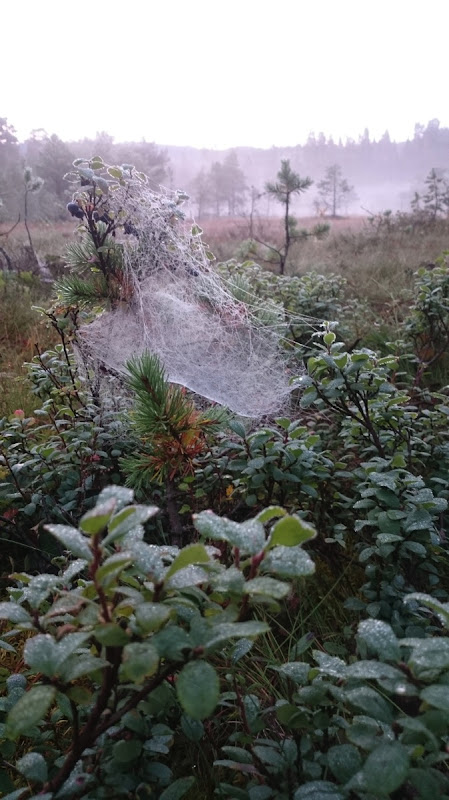 Spiders have been hard at work during the night. From an early morning on Fuglmyra.

But 10K is hardly a Great Wall, and I’m all about big, hairy goals - that’s why I wanted to run Ultravasan 90K in the first place! So I’ll just put it out there. I want to able to run Ultra-Trail du Mont Blanc. Yes, the 166 km ultra race with 10K meters of climbING, and yes, I am insane. No, not next year, and maybe not even the year after that. This is definitely a long term project.

I first encounter the trail that runs around Mont Blanc through France, Italy and Switzerland in 2006. We hiked the trail over the course of 12 days, as a family. 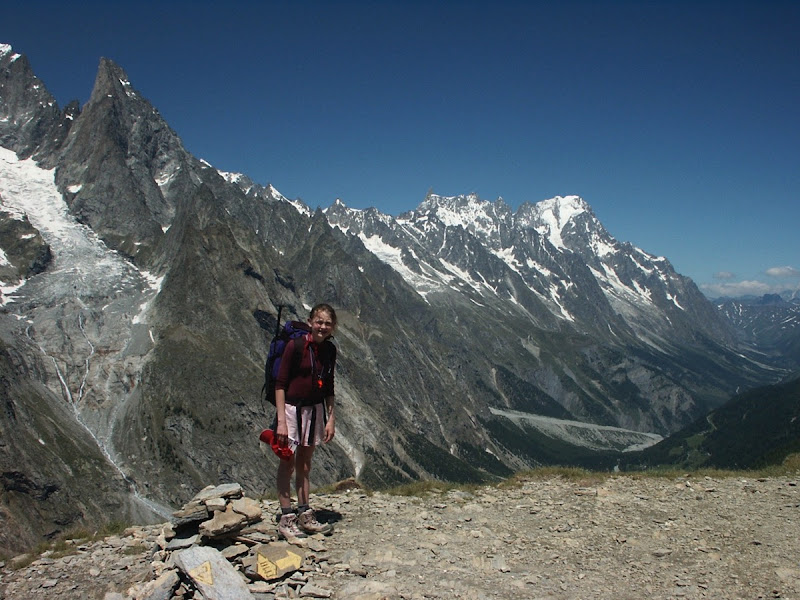 On the UTMB in 2006. Those views! Photo by Richard Strimbeck

I then returned in 2012 and mountain biked the trail in 4 days. Now I have the crazy idea to go back and do it in one day (or, umm, probably more like 30-40 hours, as anyone who is not Kilian Jornet is likely to take!). I long to be one of those superhumans who just keeps going through darkness and pain, and is rewarded with epic sunrises on the Swiss-Italian border and sweeping views of sprawling Alpen glaciers.

Next are the challenges of actually running UTMB. I was able wrap my head around 90K, but I still wasn’t able to go through with it. However does one prepare mentally for 166 km? This is a distance that, on Norwegian roads, would take at least 3 hours to drive. And 10K vertical meters is also mind-boggling. Climbing up and down that much will shred legs that aren’t strong enough, that haven’t prepared well enough. The greatest challenge for me, I think, is that UTMB starts in the evening. So the race has you running into the night from the very beginning. I am (very very much) a morning person, and thus I will be tired and sleepy just starting the race. How do I keep myself from quitting, and keep eating, through those long, dark hours?

I won’t surmount all of these challenges this week. All I can do is go out for another run, put another brick on the Wall, and hope that my mortaring skills are up to UTMB.