Read part 1 of this trip report here.
Strava data (a map) for the section described below can be found here.
The party next to the campground in Murter continued all night, blasting thudding techno music through the thin walls of our tent. Luckily it started to rain. By ‘luckily’, I mean that it rained so hard that the rhythmic pounding of the rain against the tent fly drowned out the noise of the party. Flashes of lightening occasionally light up the tent like someone flicking a light switch.
Suffice to say we did not sleep very well.
We awoke blearily at 8, and it took us two hours to shake off the long night, compress all of our belongings into panniers, and hit the road. I remember the stretch of road between Murter and Biograd that morning as less spectacular than what we had ridden the day before, but in hindsight I realize that lack of sleep and the greyness of the day may be playing tricks on my memories.
I was still hungry after our rushed breakfast of leftover bread and cheese from the day before, as well as desperate for caffeine. I quickly located a tiny market in the first town we rolled into, and timidly entered the market, passing two elderly Croatian gentlemen drinking beer and shouting at each other from plastic yard chairs on either side of the entrance. I exited the store presently clutching a large baguette, apples and yogurt - but no coffee. 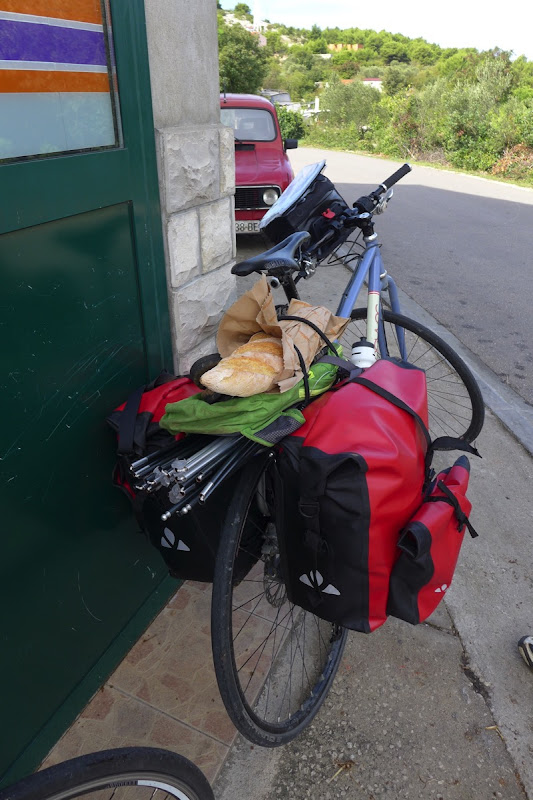 Baguette transport for the classy.
Despite the total lack of caffeine, second breakfast woke up my system and the day seemed to be looking up as we pedalled towards Biograd. One doesn’t need sleep to bike tour! Most of bike touring is an exercise in combatting boredom, or allowing hours to pass while floating (relatively) slowly through the landscape. A little tiredness just let my mind drift more easily.
I looked at the map in the waterproof case on my handlebar bag. We would be coming up to a big city, Zadar, later in the day. I could just imagine spend an hour trying to get through another maze of one-way streets and highway entrances like Sibenik. Slowly, I began to trace an alternate route on the backroads around Zadar. If there just was a larger store in Biograd, so we could be sure to get enough food to last through the next morning, we could skip Zadar.
There was, in fact, a shopping mall in the outskirts of Biograd, and we were not only able get a ton of food but also scored half-finger cycling gloves at a sports store. Being from Norway, and doing mainly mountain biking, full-finger gloves are much more useful than half-finger gloves most of the time. But for cycle touring in Croatia, full-finger gloves turned out not to be the right choice.
From Biograd, we left the main coast road and headed out into the countryside. Finally, the roads were quiet enough for us to ride side by side and chat! The roads cut through vineyards and other farmland, with the occasional tiny village thrown in. Now far out of sight of the coast, the villages lacked businesses peddling to tourists and felt more authentic. 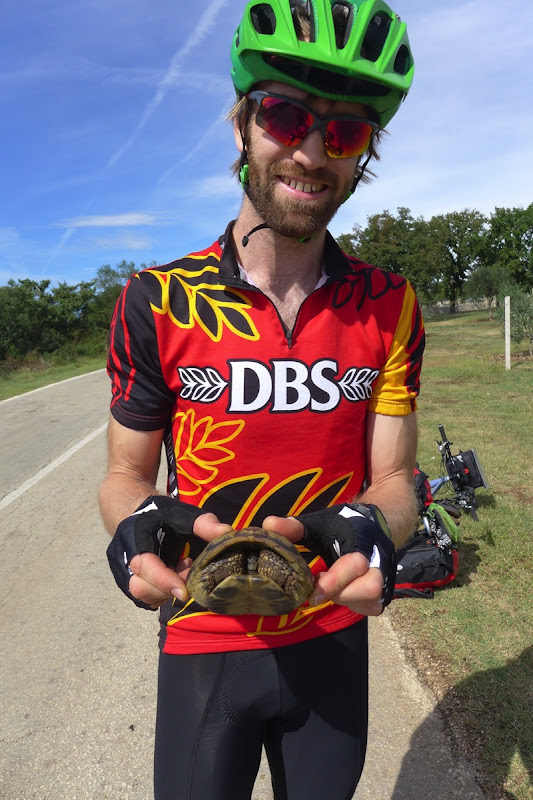 A turtle rescue was performed on the road. The turtle did not appear grateful.
Gradually, the flat road through dusty farmland turned towards the east and pointed us towards the inland mountains of Paklenica national park. The 1600-meter peaks were crowned in a swath of fluffy clouds and towered above the plane we were crossing. They imposed the horizon as far as the eye could see, a barrier to the rest of Eastern Europe. 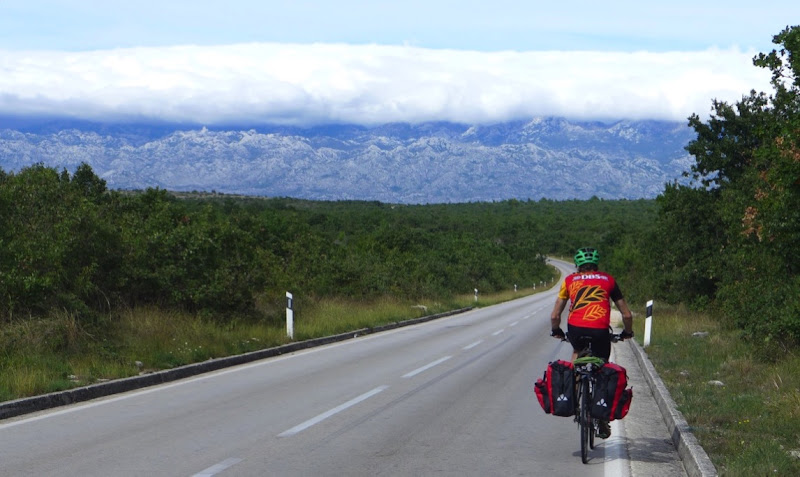 The Misty Mountains?
The road did several big rollers, with me huffing and puffing up the climbs. I had recently swapped the triple crank that came on my Trek Lexa for a compact crank. For all you non-bike nerds out there, that means that my easiest gear had just gotten significantly harder. Adding 15 kgs of touring equipment to the back of the bike didn’t exactly remediate the situation.
The last roller brought us into a sharp northward turn, and we descended onto the peninsula that would run into the island of Pag. It was breathtaking. The blue sea was sparkling, surface buffeted by a light wind. A dramatic coastline extended ahead of us, and the barrier of mountains still loomed to our right. 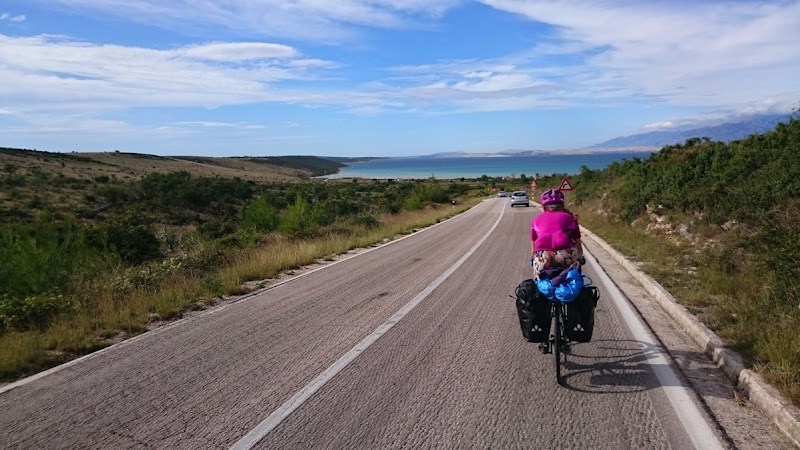 To Pag! Yet another case of ‘the picture can’t possibly capture the depth of landscape as we experienced it.’ But beautiful nonetheless.
As we pedalled along the once-distant coastline, the wind started to pick up. It didn’t just get stronger, it started to blow gusts of cross wind. In the cross wind, our panniers acted like sails, threatening to push us over with every gust. I quickly learned the trick of leaning in the wind, anticipating a gust at any moment, and pedalling forward as hard as I could when the gusts came. Physics, I reasoned, was on my side. The more forward momentum I could create, the more momentum the wind would have to create to tip me over.
Then came The Bridge.
The bridge between the mainland and Pag is an arching engineering wonder stretched between two barren sea cliffs. On the Pag side of the bridge is a ruined fortress, gazing up at the curved steel of the bridge. How long did the fortress stand for? How long will the bridge stand for? Who knows. 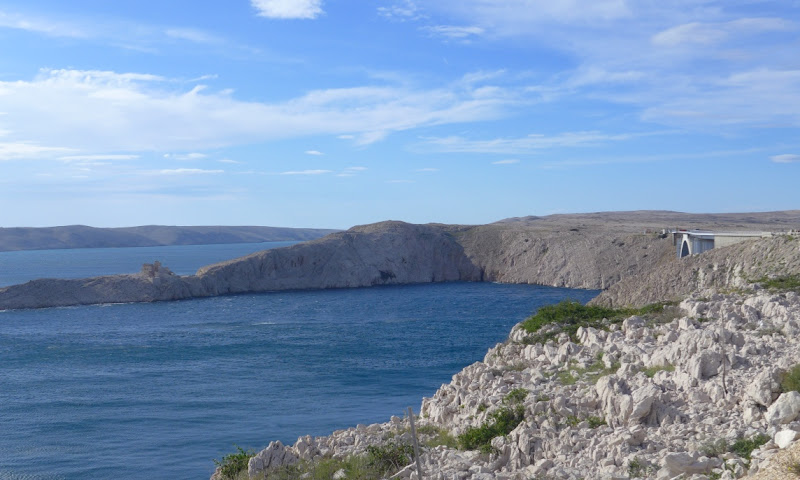 A ruined fortress and a bridge, staring at each other.
As we approached the bridge, the wind went from ‘strong gusts of cross wind’ to ‘gusts of cross wind that actually threatened to blow me over’. If I got blown over, I realized, I would fall directly into the road, in front of any passing cars. The apex of the wind seemed to be around the bridge itself, where the landscape acted as funnel.
“This wind is really strong!” I whined to Audun, “I’m scared!"
“It’ll be alright”, he reassured me, “Just ride carefully!” I proceeded to categorically refuse to cross the bridge while riding my bike. So we squeezed up onto the tiny pedestrian walkway and pushed our bikes across. Audun admitted soon after crossing that this, in fact, had been a good choice. The wind was strong enough to actually stop us in our tracks as we walked.
Soon after the bridge, higher terrain around us provided enough of a shield from the unrelenting wind for us to ride. We quickly pedalled the last few kilometers to the town of Dinjiska, our final destination for the evening.
As we looked for a campsite, an elderly Croatian woman beckoned to her driveway, and I saw a small sign for ‘Autocamp’. The woman apparently only spoke German (in addition to Croatian I presume), and assuming we looked German enough, start to explain the campsite procedure in German. I stood there, smiling like an idiot. Thankfully Audun speaks enough German to be able to ask all the right questions, and soon our Palace of Luxury and Spaciousness was set up in the lady’s back yard.
Then we went to swim in the ocean, and there were swans there. Swans! Enormous, white birds with loooong elegant necks. Actually, they were kind of scary; they wouldn’t move when I walked out into the water and I was kind of afraid they would attack me. Which just goes to show: don’t feed the wildlife, tourists! 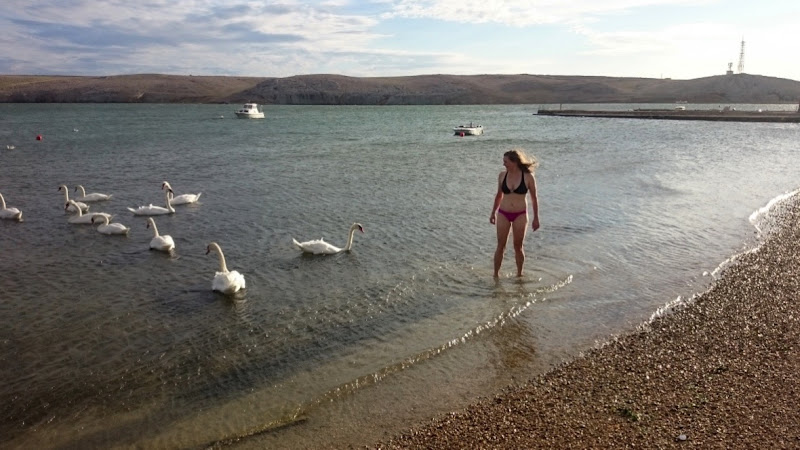 Swimming (err, shying away from!) with the swams on Pag!
We ate an enormous dinner at a tiny restaurant where we were the only customers. A news station was blaring in Croatian on the TV, reporting about Syrian refugees trying to cross into Europe, which, come to think of it, was happening not to far from here. The familiar images of swaths of people all trying to force themselves onto an already overflowing train flashed across the screen. Would we be affected by the refugee crisis? How would our border crossing into Slovenia be?
Those questions would be answered in due time. We tumbled back to our tent, where the wind fly was flapping ferociously in the still strong wind. Sigh. And I had been hoping to get a good night’s sleep...
- The Wild Bazilchuk
Labels: bike touring biking croatia italy sun