How are adventures born?
“We should take a week of vacation in September. We should ride our bikes. Let’s go somewhere warm, not cold, rainy Norway.” And that was how Audun and I ended up being spewed out of a plane with hundreds of Norwegian tourists seeking the sun in Split, Croatia. Our return tickets were from Venice, Italy, and we had 7 days to get there, hopefully mostly propelled by the power of our own pedalling. 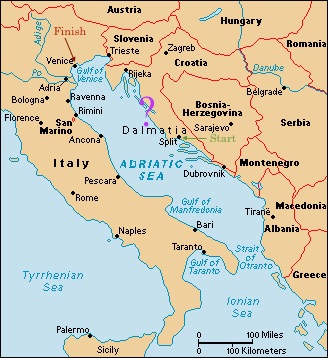 Start: Split. Finish: Venice. Route: TBD
As tourists continued to crowd the tiny baggage pick-up terminal at the Split airport, Audun and I set about repacking our things and changing into bike clothes. Being the only people with bikes and  luggage exploded all over the terminal, we got a lot of strange looks. After all, who in there right mind would travel to a beach paradise like the Adriatic coast and ride their bikes, instead of relaxing like a sane person? 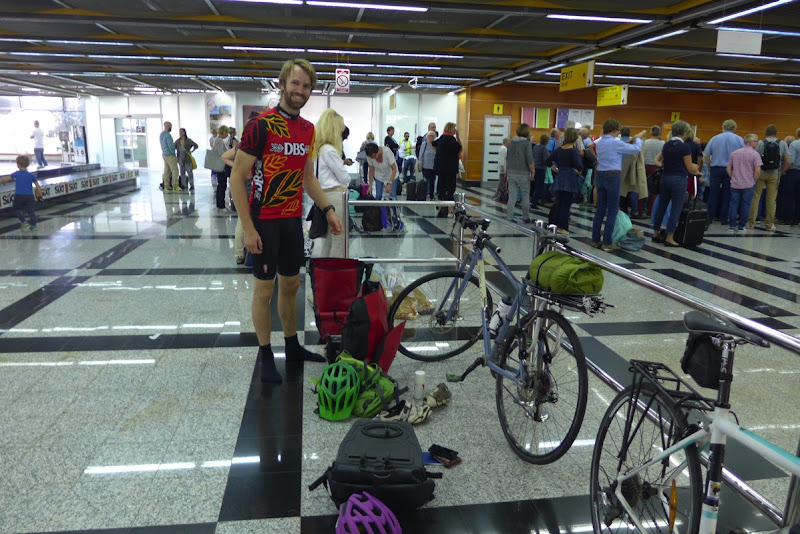 Just casually repacking in the baggage terminal
Us, apparently. It was absolutely sweltering as we wheeled our fully ladened bikes into the main terminal. We didn’t have any water, and were looking around for somewhere to get some when a security guard told us off for loitering with our bikes. So we entered the merciless Croatian sun with no water, and started to pedal, hoping we would find some soon.
The area around the airport was dusty and decrepit, strewn with litter ignored by the cars zooming by. After a couple kilometers, we located a large supermarket, and purchased water, ice cream, bread, sausage, cheese, chips and drive map of Croatia and the surrounding countries. Now feeling more prepared, we headed up the coast. The villages grew more charming as we rode further away from the airport, but the temperature kept rising, to an unpleasant 37 C. 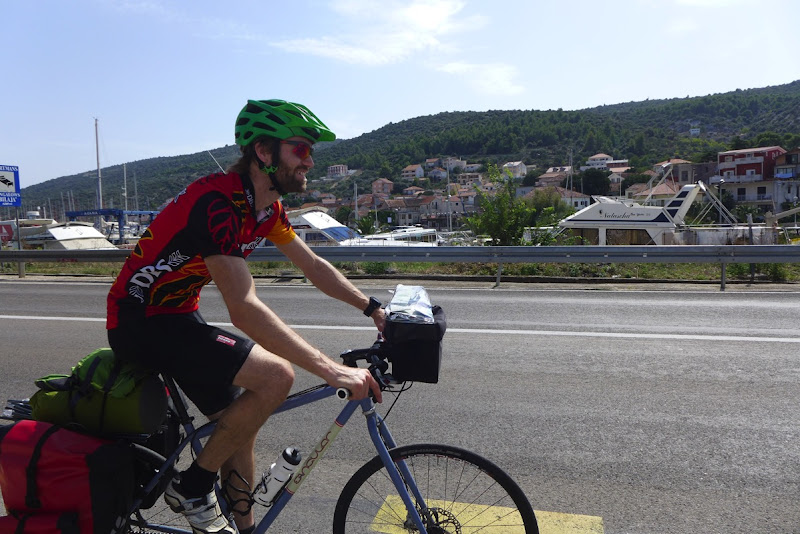 Cruisin' through Marina
We were both drinking water like crazy, and had to stop several times for more refreshments, consuming a total of 9 liters (!) of water total, plus Cokes and ice creams.
The charming villages near the coast were well-maintained, but as the road veered away from the coast the houses told a different story. There were many half-finished or abandoned houses with empty windows staring out at the dusty landscape populated by scrub brush and rocks. What was their story? What would possess someone to build half of a house, and then just stop? 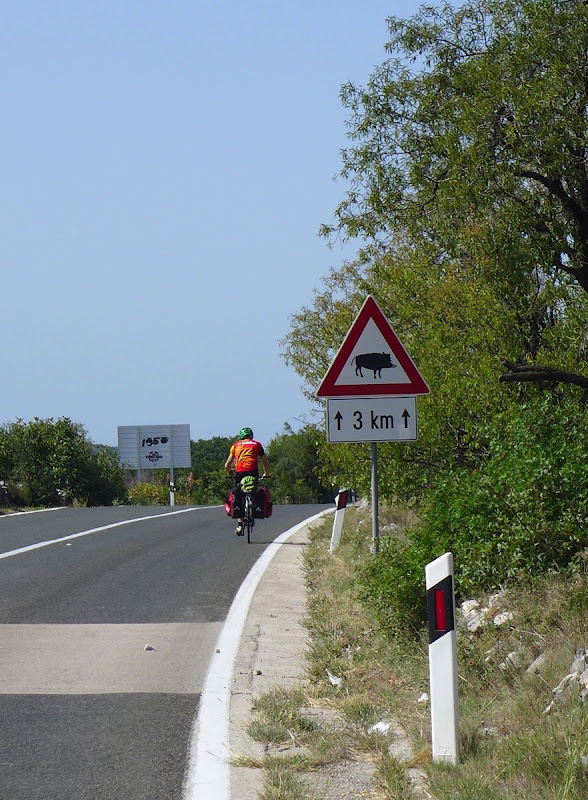 Beware of wild boar.
The most beautiful view of the day was coming into Primosten, a town built on a tiny island off the mainland. We met some German tourists (meeting German tourists would become a theme of the trip; apparently Croatia is where they all go), and got a rare shot of the two of us, sweaty and on the verge of overheating above Primosten. 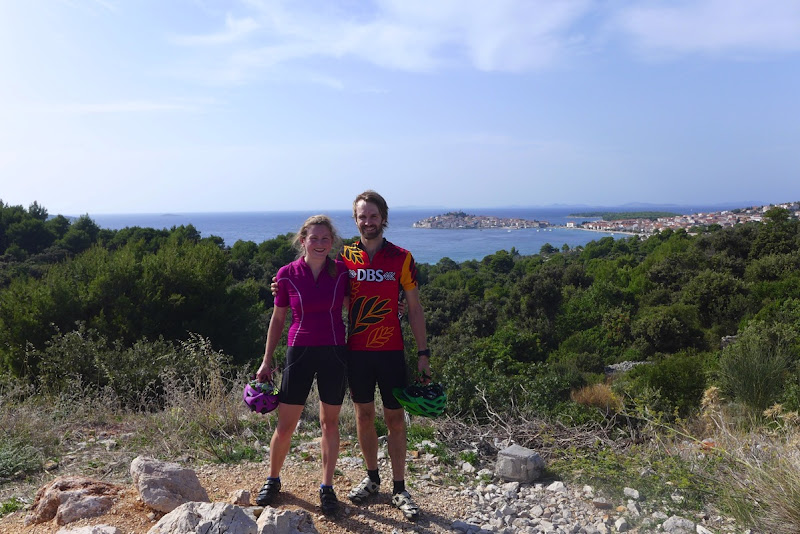 Well, at least it’s not raining!
After some difficult navigating through the city of Sibenik, we decided it was time to make a plan for where to camp for the night. The road map had campgrounds marked on it, and we decided to shoot for Murter, an island connected to the mainland by a bridge. I was feeling sluggish and hot as we left Sibenik but perked up as the temperatures starting dropping. We stopped at the first campground on Murter, to minimize the amount of backtracking out to the main road the next day.
The tent we had on this trip is a recent purchase, and I don’t consider it a tent so much as a Palace of Spaciousness and Luxury. Backstory: when Audun and I started dating, we each had our own tiny, two person tents. The kind of tent that two people can fit into, but only one person can actually move around comfortably at a time. So much research was done before the purchase of our first joint tent, and we settled on the Nemi Losi 3, with the Garage add-on. Compared to our old tents, this 3-person tent feels so big I’m actually kind of embarrassed when I set it up.
The crazy thing is that the Nemi Losi is almost as light as our old tents. This trip would be its first real test round, and we had brought the Garage as well. The Garage is an enormous vestibule that almost doubles the size of the tent, and allowed us to store our bikes ‘inside’. Yes, our tent literally has a bike garage. 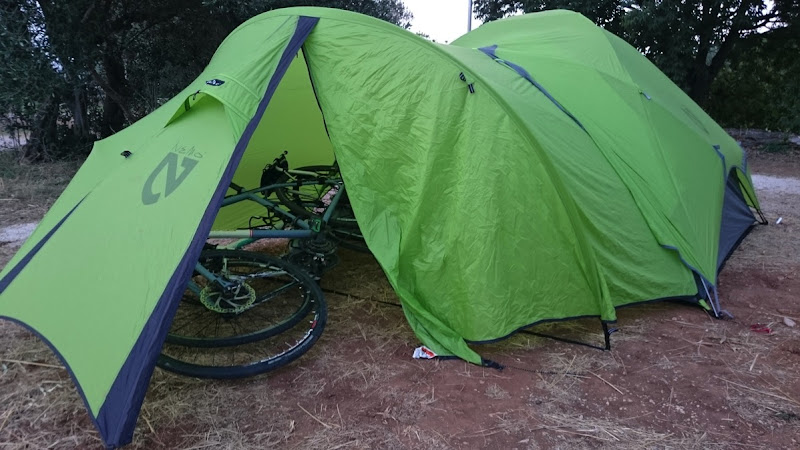 The Nemo Losi with Bike Garage.
After setting up the Palace of Spaciousness and Luxury, we walked into the village of Tisno for a dinner. The food was so cheap - I don’t think you could make the same food at home for that price in Norway! - and we had a large platter of grilled meat while talking to an opinionated Austrian guy at the table next to us. Everything was wrong! No one cared about the planet! Global warming was hoax to make money! He was very talkative, and had travelled a lot around Croatia (“The weather is always bad north of Zadar!” he proclaimed), so we got a couple of good tips. 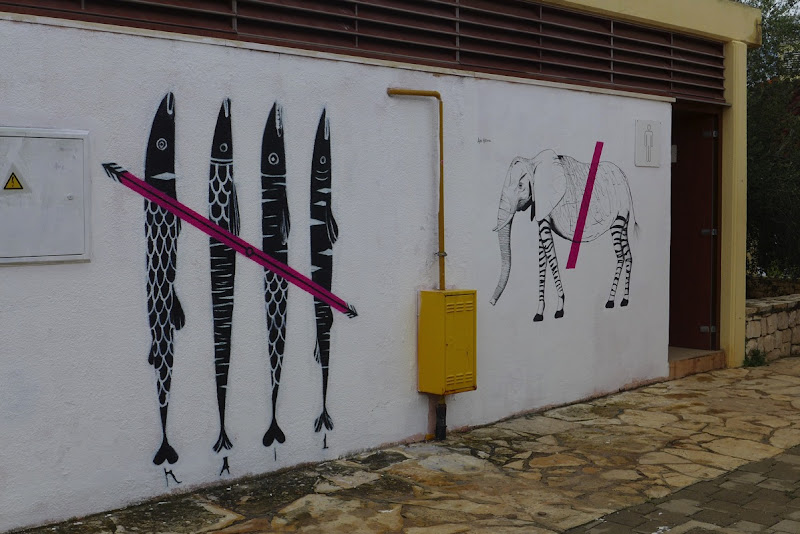 Cool wall art on the bathrooms at the campsite.
Back at the campsite, the neighbouring jet-ski rental place had decided to have a loud party. Sigh. Hopefully it wouldn’t go too late. Despite the loud music, we both fell asleep, feeling the effect of an early morning to catch the plane and a long, hot day riding.
Stats: 92.4 km ridden, 806 vertical meters, moving time 4:46
- The Wild Bazilchuk
Labels: adventure bike touring biking croatia italy sun