This is the third part in my series about skiing during February break. The others parts can be read here: Part 1, Part 2
I'd been looking forward to a chance to explore the Belledonne mountains ever since I moved here. These mountains are sharper, and by far larger, than Vercors and Chartreuse, the other two mountain ranges that encircle Grenoble, and they were the first elements of the Grenoble skyline to become temptingly frosted in snow in the fall.
We took a rest day after the traverse in the Aiguille Rouges and emboldened by fresh legs and fresh mountains, I decided I wanted to go up a big one. Perusing the oddly-named Volodia Shahshahani's indispensable ski touring guidebook of the Belledonnes with the criteria "steepish, longish", we settled on Grand Lauzière. The guidebook claimed the trip would take around 5 1/2 hours. I'm going to go ahead right now and say that if you are not on super lightweight gear (Dynafit bindings, skis so skinny you can floss with them, etc) and if you plan to take a reasonable amount of breaks (i.e. you plan on eating at some point during your ski), these guidebook times are extremely ambitious.
With light hearts and heavy legs we set out from Freydieres the next day in perfect bluebird weather. The parking area for the start of the ski was in a town so small that the road to the village was actually not on the car's GPS. Luckily a good navigator riding shotgun with a topo map will get you there every time! 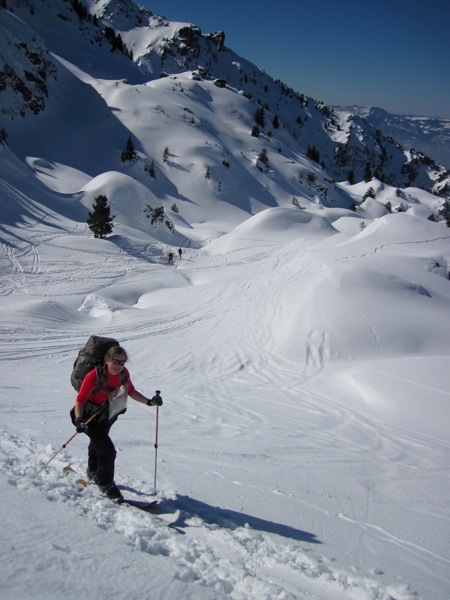 As the day progressed we were passed by many Frenchmen on floss skis, and my legs grew progressively heavier. As we skirted around the steep slopes of Lac du Crozet, it was passed midday, and the map showed that we still had a ways to go before we even climbed the main flank of the mountain. In the end we decided to climb Le Grand Colon, a peak much closer to the lake. 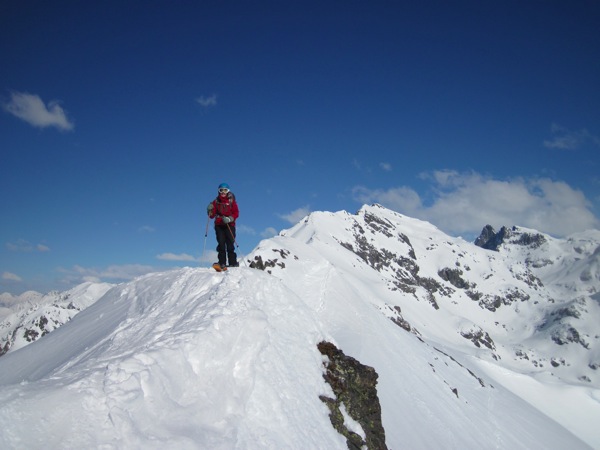 From the top we decided, with Volodia's help, to ski the north-facing couloir straight down from the top. This particular couloir was about 40 degrees at the top, which seemed practically flat compared to the Couloir of Terror in Chamonix. The snow was hard and skied off, but on the low slopes we traversed out to find powder (!) on the lower section of the couloir. 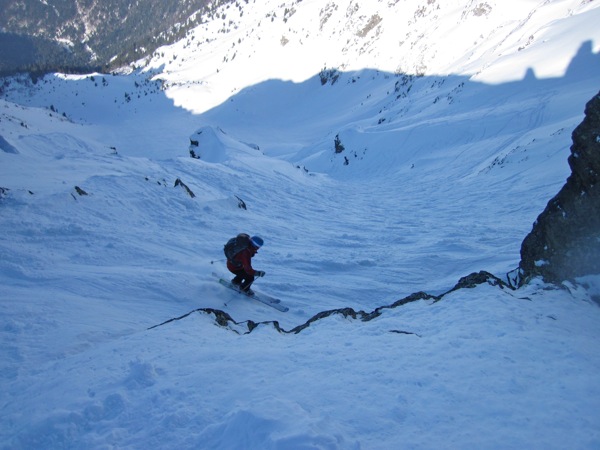 The next (and last) day we summited Orionde, a small peak slightly further north. There are no pictures of this event. I was extremely slow and grumpy all day - I literally felt as though my skis were two anchors dragging me down.
As Audun said, "All of our vacations are bootcamps!"
This is basically true. What does that say about me?
- The Wild Bazilchuk
Labels: belladonne grenoble skiing snow sun