This is the second post in my series about skiing during February break. The first can be read here.
Twilight had begun to engulf the Swiss road up Col de la Forclaz, and sparkling flakes of snow drifted down through our cars headlights. The altimeter on our GPS climbed steadily. 900 meters… 1000 meters.
"How high is the pass again?" asked Audun.
"Around 1200?" I answered, not really sure. We had stayed at Col de la Forclaz for the our last night out on Tour de Mont Blanc in August, but I only had vague recollections of the height of the pass.
"It's getting icy," said Audun. "We should stop and put the chains on." So we pulled over and got out in the cold to put snow chains on the summer tires of our rental Citröen, then inched over the col as cars with winter tires whizzed past us and night fell completely. I was completely off - the pass topped out at 1500 meters, and we descended slowly into Chamonix valley with our snow chains still on.
Pleased with our success in surviving the drive to Chamonix, we enjoyed a meal at a small restaurant near our chalet and made a plan of attack for the next day. With nearly 3000 vertical in our legs from the weekend, we decided to head for a day in the slopes at Grand Montet.
Forty-three euros and one cramped gondola rid up later, we had what (unfortunately) turned out to be the worst ski day of the trip. Although the weather was gorgeous, it hadn't snowed for a week except a slight dusting the night before. We did some ok runs in the 'magic' forest tucked away between two lifts and then headed for the (tiny) park to do some jumps. Towards the end of the day we headed higher up on the mountain and tired ourselves out skiing off-piste moguls in the side country. 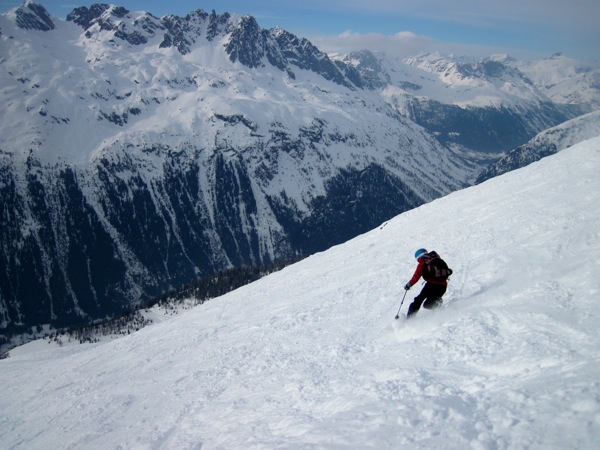 The next day we decided to forego the skied off slopes and head out for a ski tour. I had bought a ski tour guide, but to my frustration most of the trips in the guide required glacier equipment and experience. If I ever go back to Chamonix, I want to know how to handle glaciers! We did  manage to settle on an interesting-looking tour: a traverse from Col du lac Cornu (towards the top of the Brevent ski area) to Col de Berard and down almost to the Swiss border.
The next day dawned even sunnier than the last, and we took the bus into Chamonix center and walked up the ticket counter at Brevent (I'm going to take a moment to mention that I felt incredibly hardcore trooping up to the ticket counter of a ski area with an ice ax on my backpack. There, I've said it).
"Two one-way tickets to the top of the Cornu lift," I said.
The ticket lady blinked at me. "Do you want a ticket to the mid station, or to the top of Brevent? Those are the only single-ride tickets we sell." Five minutes later we left the ticket counter with 38 euro four-hour ski passes for all of Chamonix. This was apparently the cheapest way to get up that particular lift one time. "This better be worth it," I grumbled under my breath.
"It will be," said Audun, "Especially because our alternative is skinning up the blue ski trail for 1000 vertical meters." And he was right. 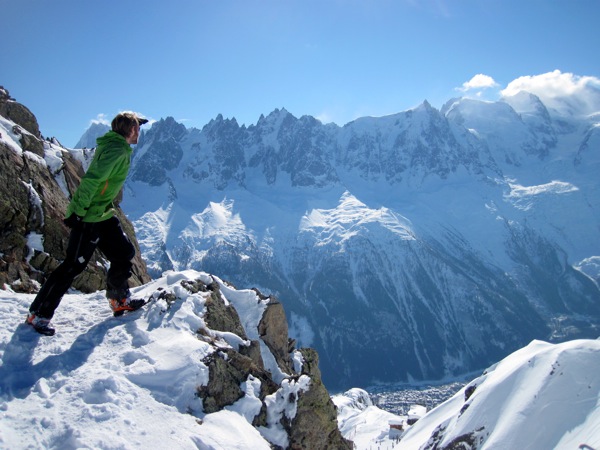 The from Col du lac Cornu was incredible - every spiky peak in the Mont Blanc massif seemed to have been polished for our enjoyment. Mont Blanc herself was shyly draped in some clouds (far right in the picture above). We had also left all the tourists behind, and were alone on the mountain except for one French man on light rando skis.
"Can you take our picture?" I asked, in French. He did: 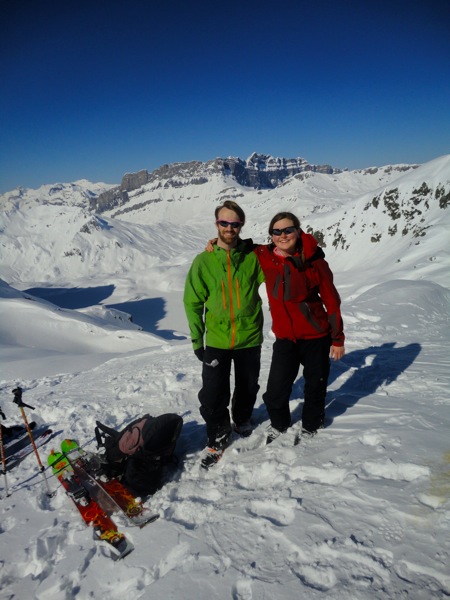 And then we took a few pictures of him, posing with Mont Blanc behind him. We chatted for a bit, and then he asked the question that made my day.
"Are you Swiss?"
Let me explain the significance of this. As far as I've understood, if a Frenchmen asks if you are Swiss, that means:
1) You speak fluent French, but...
2) You have a strange accent that he can't place.
So for someone still learning French, this was a huge complement. Then Audun pointed out that is was almost 11 o'clock, and that we should get going as we had barely started our tour. So the photo session and the chitchat ended. The view continued to be not too shabby: 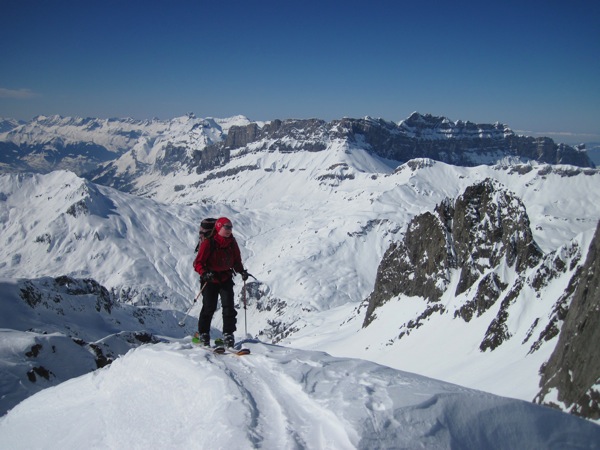 The going gradually got steeper as we headed along the ridge until we had to put our skis on our packs and boot it. 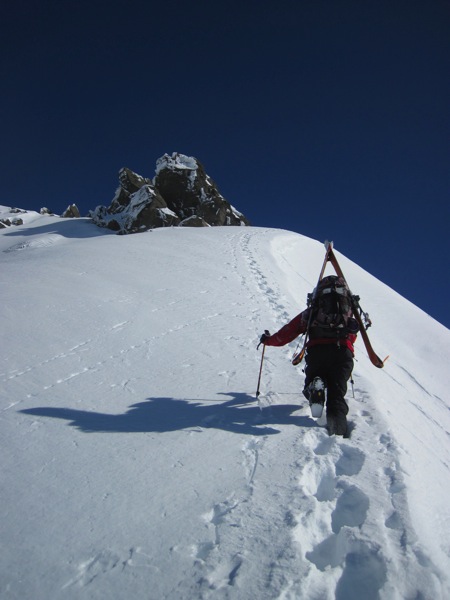 Then we stopped for lunch and had a Norwegian moment with the Norwegian chocolate Kvikk Lunsj, obligatory for every Norwegian mountain trip. 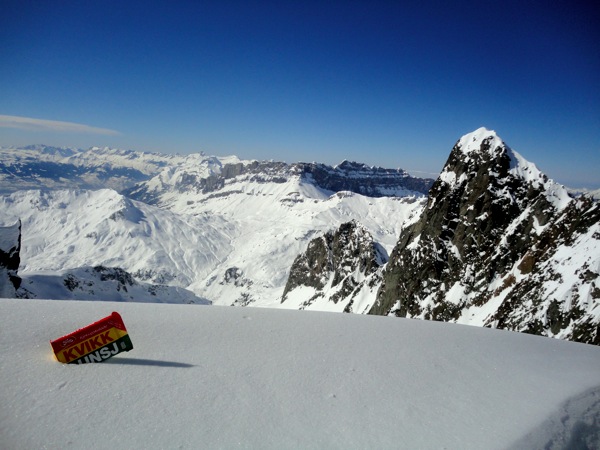 After lunch we headed over the top point of the day at about 2800 meters. We were supposed to ski down to a glacier before skinning up to to Col de Berard, and I could see the glacier below us. I could not, however, see how we were supposed to get down from the spiky, vertical ridge we were standing on. This is when I started to get nervous. We rounded a corner a saw a steep couloir covered in ski tracks that dropped down to the glacier. Well, if so many other people did it, I guess I can, I thought.
Standing on top of the couloir with my skis and helmet on, I wasn't so sure. I wasn't looking down a hill to the glacier, I seemed to be looking directly down on the glacier. I kind of think just agreeing to start skiing the couloir is among the braver things I have done, considering I was seeing my life rush past my eyes as I stood on top. Once I started down though, I was committed. I did kick turns and side slipped most of the way down, but I made it.
The glacier was covered in heavy powder snow and had a more appealing steepness to it. As we skied down it, I had to take several breaks because my legs were literally shaking. It like my dad always taught me, it takes more energy to fight the hill (i.e. sideslip down it) that to work with it (i.e. ski fast).
I didn't take any pictures in the couloir (I was to busy trying to stay upright and conscious). I did, however, snap a shot of the ridge and the glacier as we started climbing up the other side to Col Berard. Here's what it looked like (see if you can see where we skied down from the top of the ridge!): 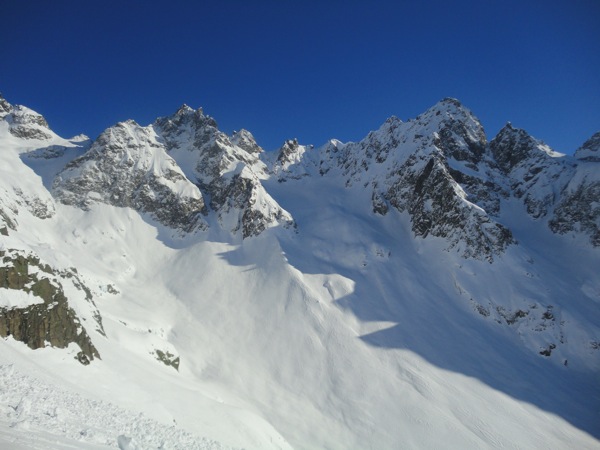 For illustration, I've cropped the photo so you can see the couloir we skied:

The rest of the day was a mellow climb up to Col de Berard and then an easy slide out through the trees to le Buet near the Swiss border. We caught a free bus back to Chamonix valley and got giant burgers at Jekyll and Hyde, and decided to head back to Grenoble the next day, as Chamonix was basically pretty skied off. Luckily there are mountains near Grenoble, so the adventures were continued… in the next post!
- The Wild Bazilchuk
Labels: chamonix france skiing snow stupid ideas