This past week was French February vacation, a godsend of a vacation conveniently placed smack in the middle of prime ski season. Luckily, Audun came for a visit, and happened to bring his skis. We picked up our rental car, a dark blue Citroën C4 and headed for Lausanne, where we met up with a Norwegian friend, Vibeke. Saturday morning we headed out for a full day of ski touring with some Swiss friends of hers.
Vanil d'Ecri
Grandvillard, a tiny hamlet between Lausanne and Berne, was so bucolic it made me want to puke. I'm sure if there had been no snow there literally would have been milkmaids dancing through the streets with garlands of flowers on their heads. As it was, the streets were empty, the air was cold but the skies above promised a beautiful sunny day. As we pulled into the parking lot (or farmer's driveway, really), I felt the wheels of the car spin. Odd.
"We have summer tires!" Audun exclaimed incredulously. I looked at the tires. Unbelievably, the car rental company had given us a car with summer tires. And we were somewhere in the middle of the Swiss Alpes in February. This could get interesting. We decided we would worry about it later, however, and began to get our gear out of the car.
Then Vibekes friends pulled up (with winter tires of course) and came over to say hi. Since I've been in France for a while, I thought I had this down.
"Bonjour", I said, and leaned in to give a bisou or kiss on each cheek. After the second kiss I pulled away, while the Swiss continued to bob around for a third kiss. Awkward!  And that's how I learned that in Switzerland, unlike Grenoble, they give three bisous.
Twenty minutes later, the skis were out, the skins were on, the backpacks ready, and we set off. Our goal was Vanil d'Ecri, a full 1600 vertical meters above the parking lot in Grandvillard. Audun and I were on the heaviest gear by far, as we both have big powder skis and tele bindings, while the Swiss opted for light Dynafit bindings and skinny skis. Today was going to be hard. 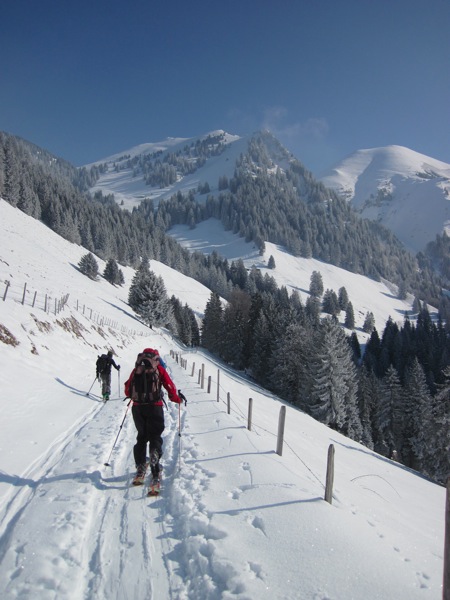 After a first mellow stretch upward through the trees and farmer's fields, we hit a huge avalanche path which we either had to circumnavigate or climb up. Vibeke, Audun and I opted to strap our skis to our packs and head straight up the slope. The avalanche debris was hard and icy, and the sun had begun to beat down, making the climb a sweaty affair. 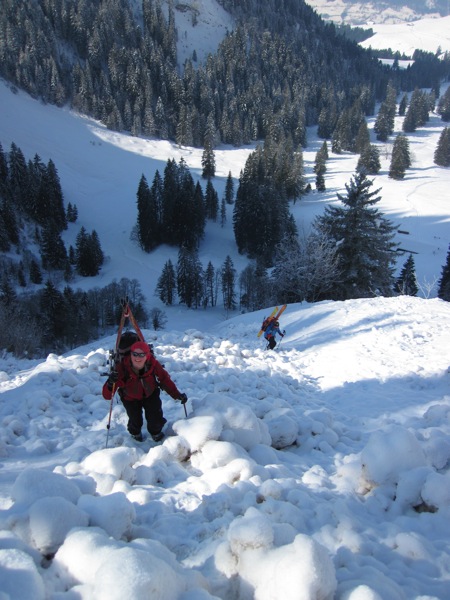 The further we climbed the more it became apparent how much the sun affected the slopes in this area. Most of the south side of the valley had avalanched, leaving bare ground, while other slopes remained pristine. Just look at the bare hills behind these guys: 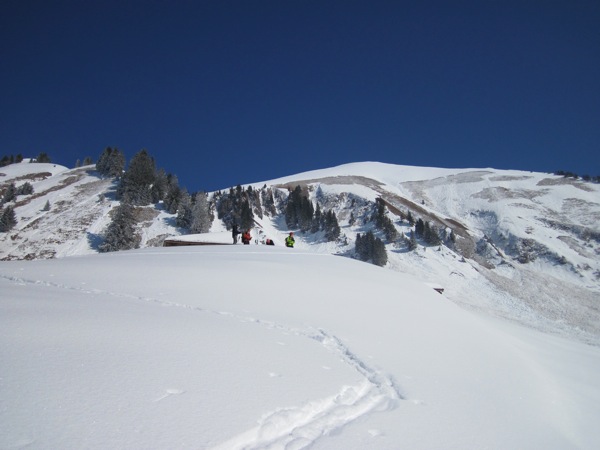 This just goes to show how much the orientation of the face matters when you're picking a peak to ski! Around lunch time we round a corner in the valley we were climbing, and saw the couloir up to Vanil d'Ecri for the first time. It was in the shadow, and the snow appeared to mostly untouched. Score! It pays to ski with locals. We still had several hundred vertical meters of hard climbing to do, and I felt my blood sugar drop. The Swiss behaved like Frenchmen and refused to show the slightest inclination of a need to eat as they charged upward on their lightweight skis. I swallowed some chocolate and steeled myself for the climb. 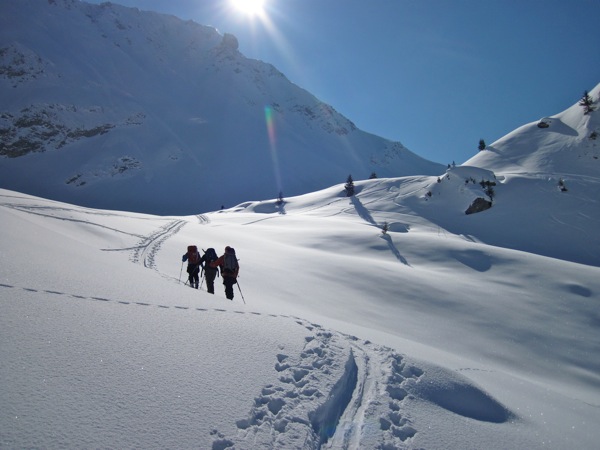 We began to zigzag up the couloir, which was wide at the bottom. I felt the snow with my pole, and started to get excited. The loose, powdery texture spelled fun! All of a sudden I heard a whoop of joy and saw a couple skiers appear from the couloir. They looked like they were having a great time - and they were stealing first tracks in the couloir! Oh well, there's plenty of snow for everyone. 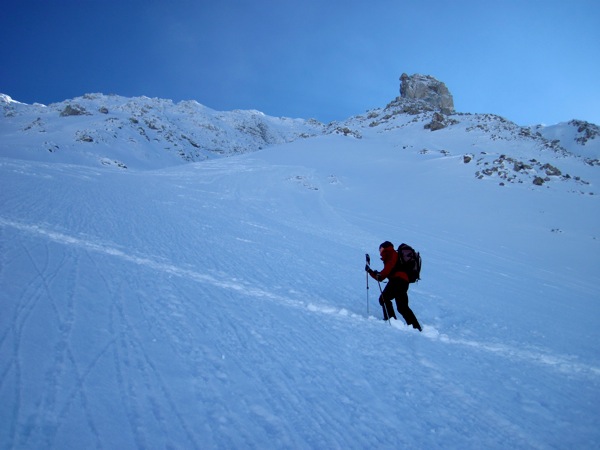 The couloir steepened and narrowed as we climbed higher. As we stopped to put our skis on our packs, another group of skiers came down the couloir. With them came a steady stream of sluff, or top layer snow, as well as chunks of harder snow that bounced down the couloir. I struggled to attach my skis to my pack as the snow showered down. The skiers finally passed, and I was able to hoist my backpack onto by back and start booting up the steep couloir. 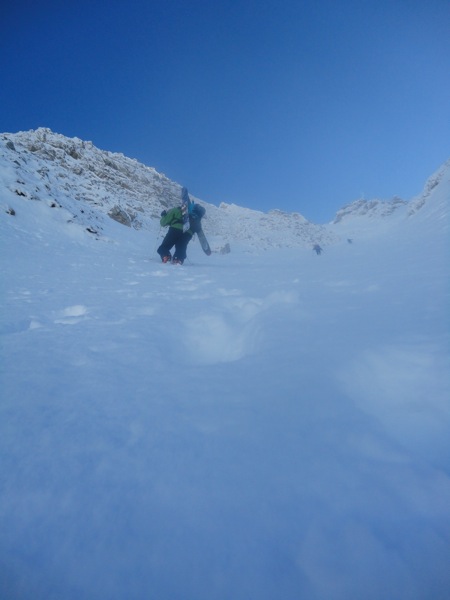 After a lot of huffing and puffing up the couloir, we scrambled up on the summit ridge to a breathtaking view. The Swiss alpes seemed to stretch endlessly in every direction. 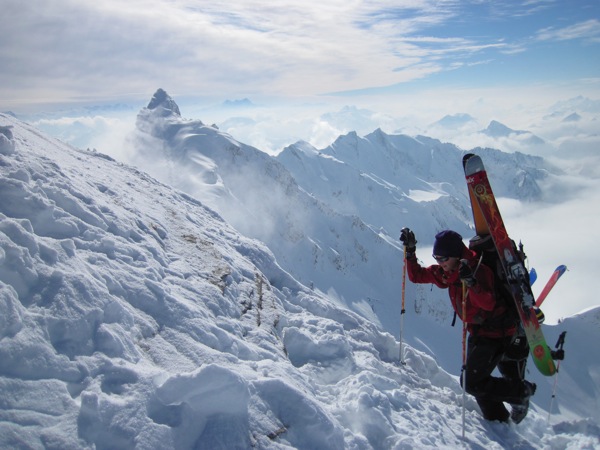 A final 15 minute walk along the ridge brought us to the summit of Vanil d'Ecri, where the Swiss were waiting, happily snacking in their down jackets. I felt pretty spent, but was excited about the descent. Powder!  We took a quick summit photo and got busy taking off our skins and getting ready for the descent. 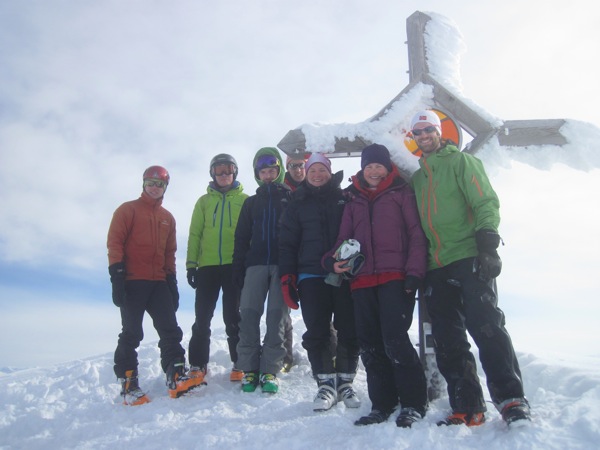 The top of the descent was pretty steep, probably 45 degrees. Steep skiing is one part scary, one part exhilarating and one part exhausting. You have to stay in control all the time - falling and sliding is not a great idea. So the challenge is to link super controlled turns and have enough speed so it's still fun. I did choppy parallel turns for the first half of the couloir, and then relaxed in to my preferred mode of gigantic, flying telemark turns as the snow grew softer and the couloir less steep. Audun, as usual, flew down the couloir at a break-neck speed, jumping of rocks and seeming to be just on the edge of a giant, tumbling fall. 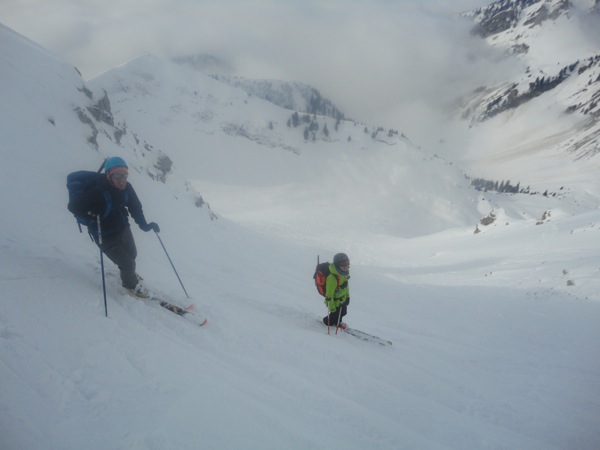 As we came down to tree line, the clouds came in and the visibility decreased. We still managed to do some nice turns through the trees before traversing out under the avalanche path and down through the farmers' fields, out to the cars.
That evening, at Swiss David's chalet, we made cheese fondu and scoured a map of the area for tours for the next day. Our bellies full of cheese, we finally agreed to try for a summit not far away called Le Tarent.
Le Tarent
The next day dawned cloudier, but the visibility was still ok. This time the group was much smaller (just me, Vibeke, Audun and David), and all of us had 'heavy' skis except David, so the pace was more moderate. 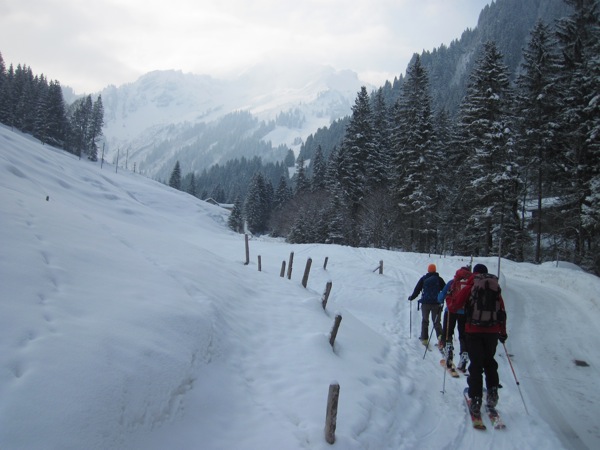 My legs, however, were heavy from the tour the day before, and as we headed up above tree line I felt a growing resistance in my mind. This is stupid,  I thought,  your tired and weak and you should be lying down. You should just stop, put on your down jacket and eat chocolate.  Luckily, the Nazi in my head kicked in. You will not be putting on your down jacket, he said, You will go to the summit. You're tired and weak because your lazy. And so I kept going. 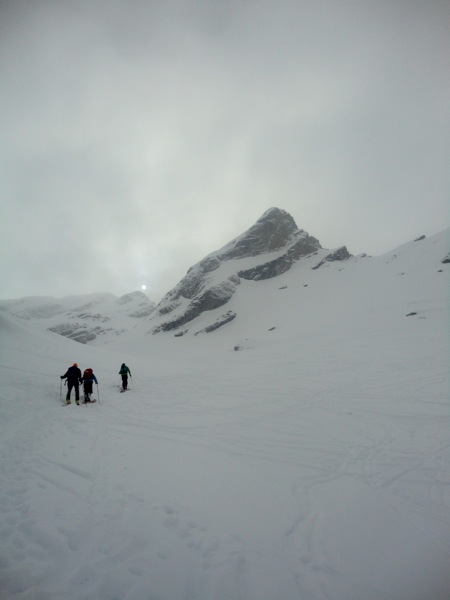 The summit was quite exposed and I felt pretty nervous at the top. In the rush to get my skins off and head downhill, I didn't even take a summit photo. The ski down was basically the opposite of the ski up. As I flew down the hill my legs lightened and I felt fearless and fast. The terrain was super fun - lots of steep parts with big, powdering lumps to jump off of and trees to swerve around. I'm not usually a big jumper, but in those conditions (soft powder) even I got some air. Look, there's even proof: 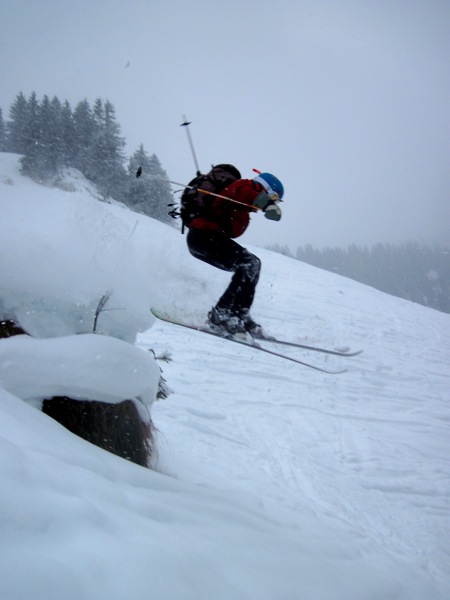 I ended the run with a huge smile on my face.
"That was my best run so far this season!" I enthused.
"That was my best run this season and last season!" said Vibeke.
We stopped at a small café to drink vin chaude (mulled wine) and discuss the finer points of the descent (Did you see when I almost hit that tree after that drop?!), before me and Audun parted ways with Vibeke and David. We were headed off to Chamonix. Over the Col de Forclaz pass. On summer tires. But that's a story for the next blog post...
- The Wild Bazilchuk
Labels: pow skiing snow switzerland