The weather forecast was too good to pass up.

I’ve wanted to participate in the iconic 54 kilometer Birkebeiner cross-country race for years. If cross-country skiing is Norway’s national sport, the Birkebeiner is its biggest festival, attracting thousands of participants. In previous years, all the slots got sold out months in advance of the event.

Every year, I’ve had some excuse. My skis are too old and crappy. I only run/bike/backcountry ski anyway, I’m not a cross-country ski racer. I don’t want to sign up for months in advance to ski the Birkebeiner in bad weather. In 2007 and 2014, the weather was so bad the race got cancelled - what it that happens again?

This year, the stars aligned. I finally bought new cross-country skis, and had enthusiastically put in a couple of long training sessions on them. The Birkebeiner, for some reason, has nose-dived in popularity, so much so that there were many available slots the week before the race. And then there was the weather: Big sun, all day. All the signs in the universe were telling me to just do it!

So that’s how I ended up on my balcony on Thursday night, skis set-up on a make-shift waxing bench of two chairs, waxing my little heart out. Long-time readers might remember my waxing woes from the 2014 Holmenkollmarsjen; I was determined to start the Birkebeiner with The Right Wax. I studied Swix’s guide obsessively and bought a few more tubes of kick wax as back up, to cover every range of temperatures I could plausibly meet, from -10°C to +10°C. 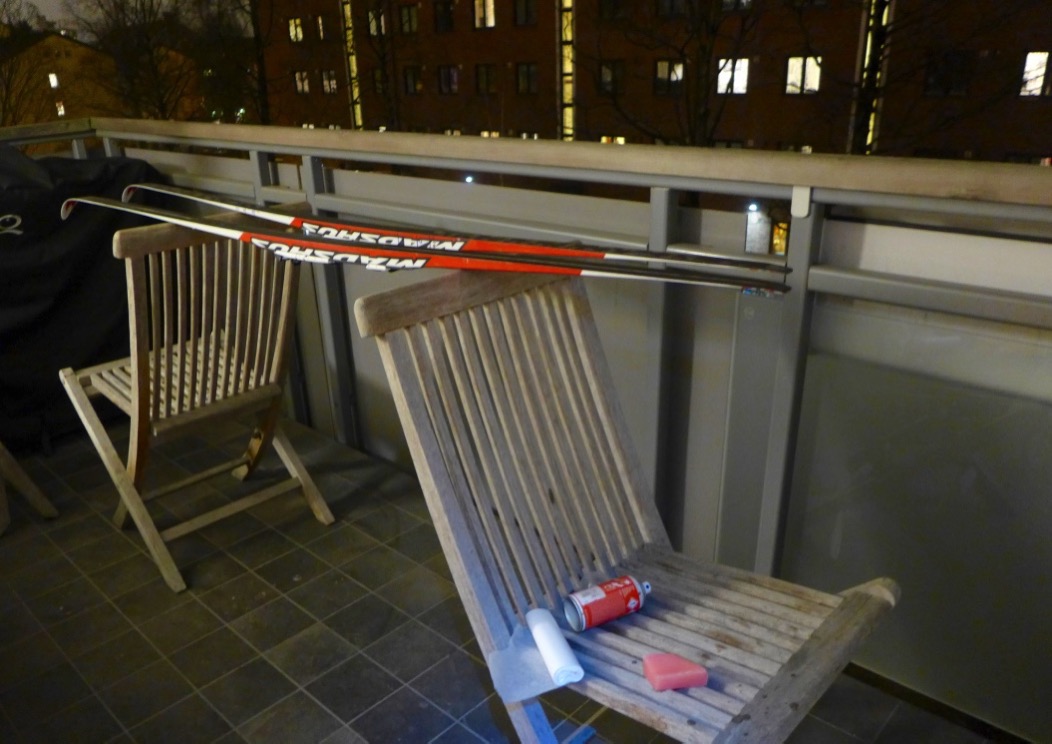 My waxing bench. This is totally how the pros do it.

I even planned to cart a whole variety of waxes with me over the mountain. After all, the race requires you to carry a backpack weighing at least 3.5 kg (symbolizing the weight of the infant king for whom the race commemorates) throughout the race. Since I wanted to use one of my small running vests, I had trouble making the weight requirement even after adding a rainbow of waxes and all the obligatory bad-weather clothing. 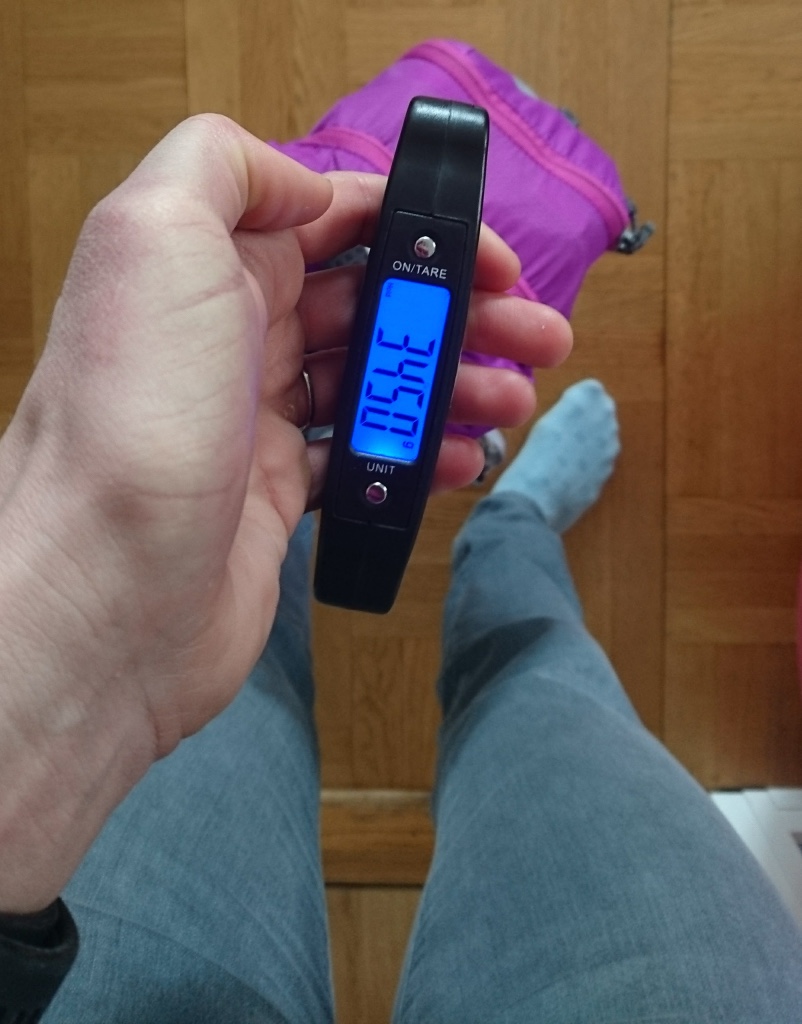 Obsessively weighing my backpack. 50 grams below the requirement, have to find something more to add!

To push my backpack over the weight requirement, I ended up with some rather unorthodox items. There was a 750g plastic bag containing assorted coins and small rocks, including the rock I carried for the last 25 K of Oslo Ecotrail last year. And then there was a small bottle of plum schnapps. 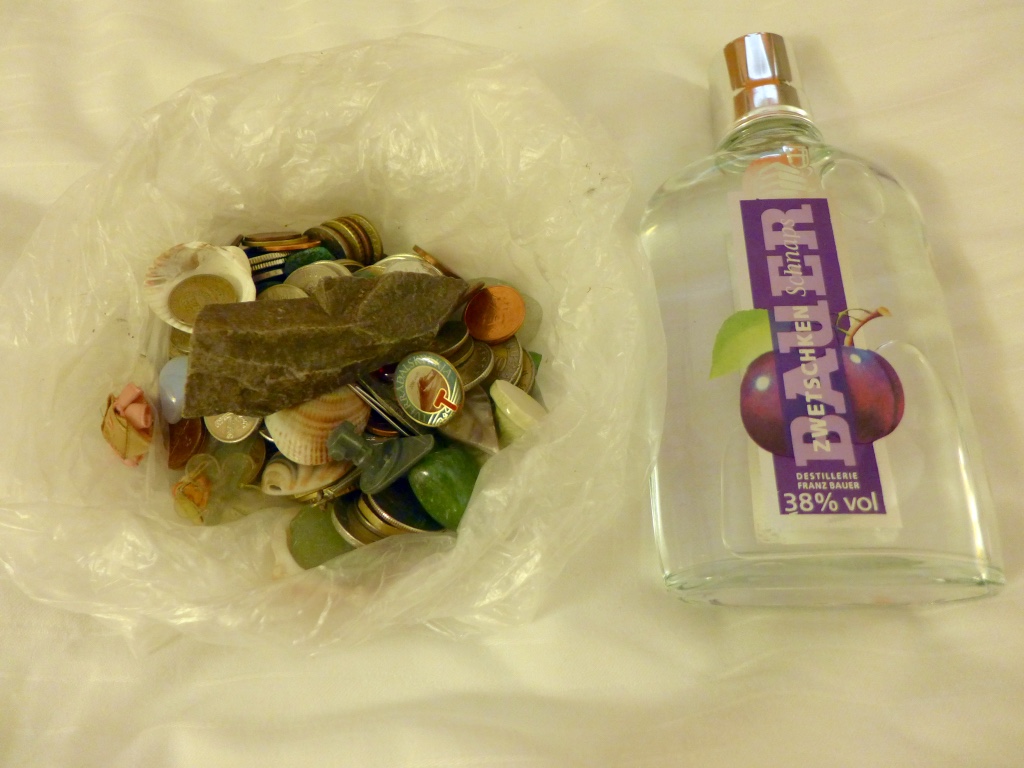 This is not obligatory equipment in the Birkebeiner. I carried it anyway.

After a fitful night’s sleep at a hotel in Hamar, I rolled out of bed and wolfed down eggs and toast at the breakfast buffet, which conveniently opened 2 hours early that Saturday for the Birkebeiner racers. The following hours were spent in a whirlwind of logistics: getting to the bus stop to the start at Rena, getting on line to pick up my bib, marking my skis and backpack with race stickers, changing my shoes and braiding my hair. By the time I had handed in my luggage to be transported over the mountain and applied a final layer of kick wax, I only had 10 minutes to go before my start and no time to get nervous. 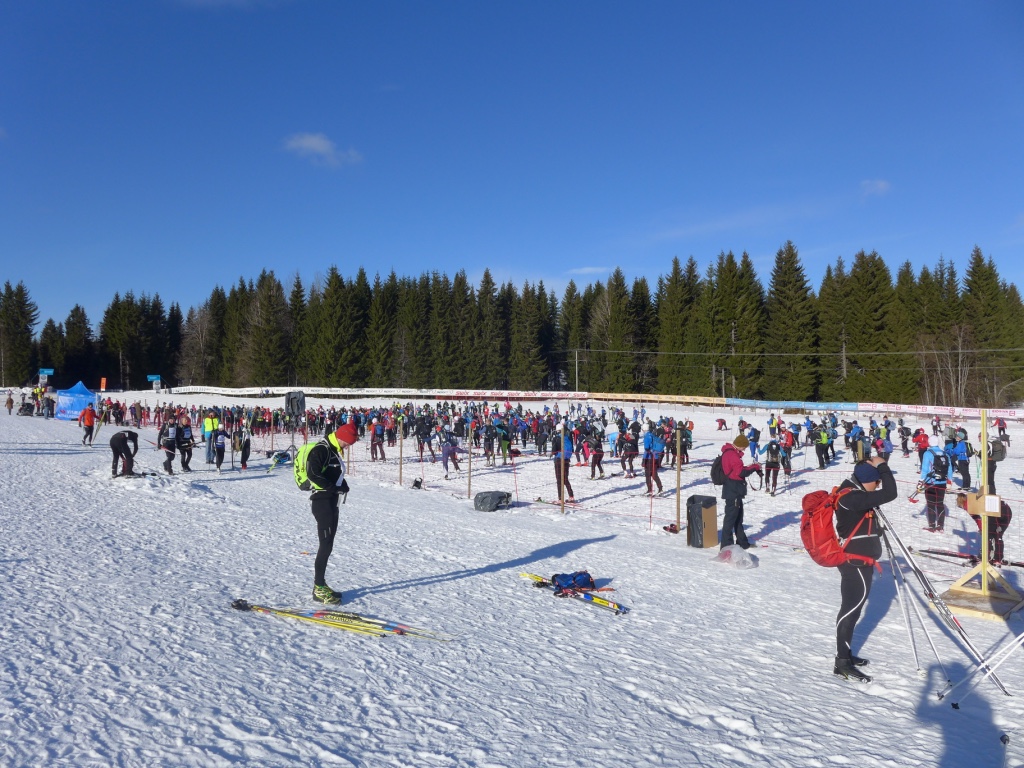 Racers line up at the start at Rena.

I was starting in wave 13, aeons after the elite skiers. My wave was open to everyone, whereas earlier waves were only for those who had participated in qualifying races. The people lining up around me ran the gamet from faster-looking guys in full lycra to older woman with a few pounds extra, not counting their race backpacks. I lined up in the middle of the field, not sure where I would end up in this mix.

The sun was shining, and I chatted with a girl lined up next to me who seemed very nervous. “You can do this!” I encouraged her, silently also encouraging myself. “It’s going to be a beautiful day! Just enjoy yourself and ski!” I only hoped that the sun wouldn’t melt the snow too much, changing the waxing conditions. 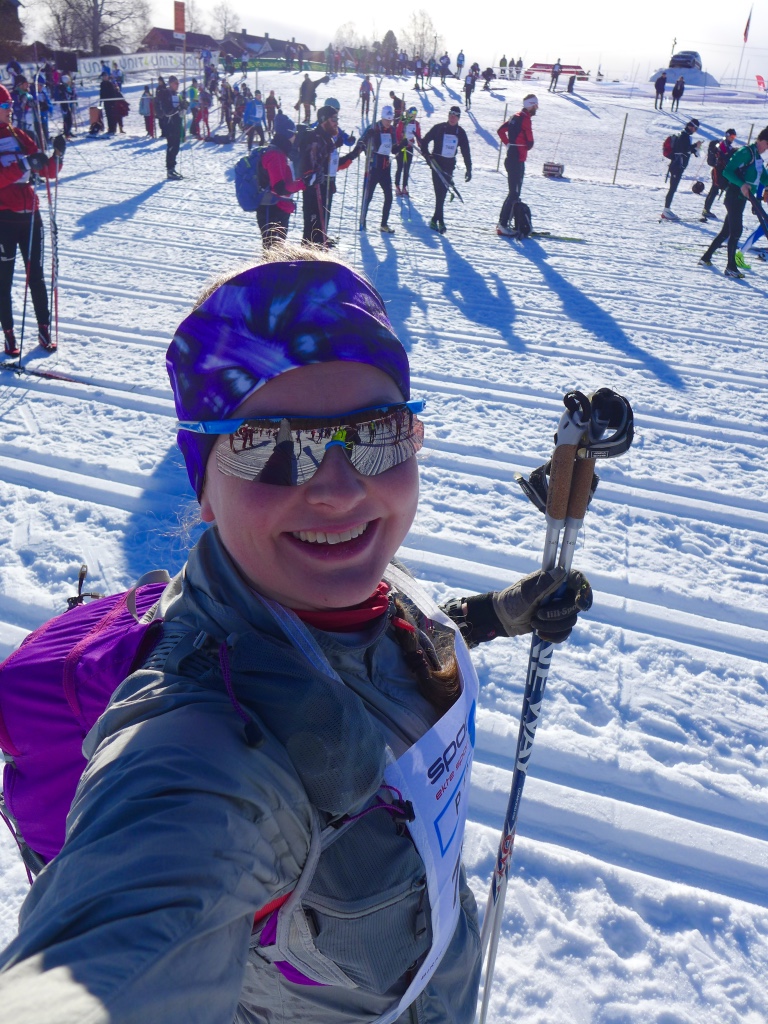 Lined up at the start. I sure am glad I remembered my sun glasses!

The gun went off, and the mass of people in front of me started moving forward. There were 8 sets of tracks heading off into the forest, and despite thousands of skiers already having used them that day they were in OK shaped.

I soon realized that I was going to be passing people today, and after the initial chaos I moved towards the left sets of tracks where the pace was faster. I tried to check myself, reminding myself that there was more than 50K left of this race. I soon settled into a comfortably groove, letting skiers in front of me set the pace until I decided to jump passed them. The first 12K of the course are gradually uphill, but rarely steep enough to push me out a gliding diagonal stride. 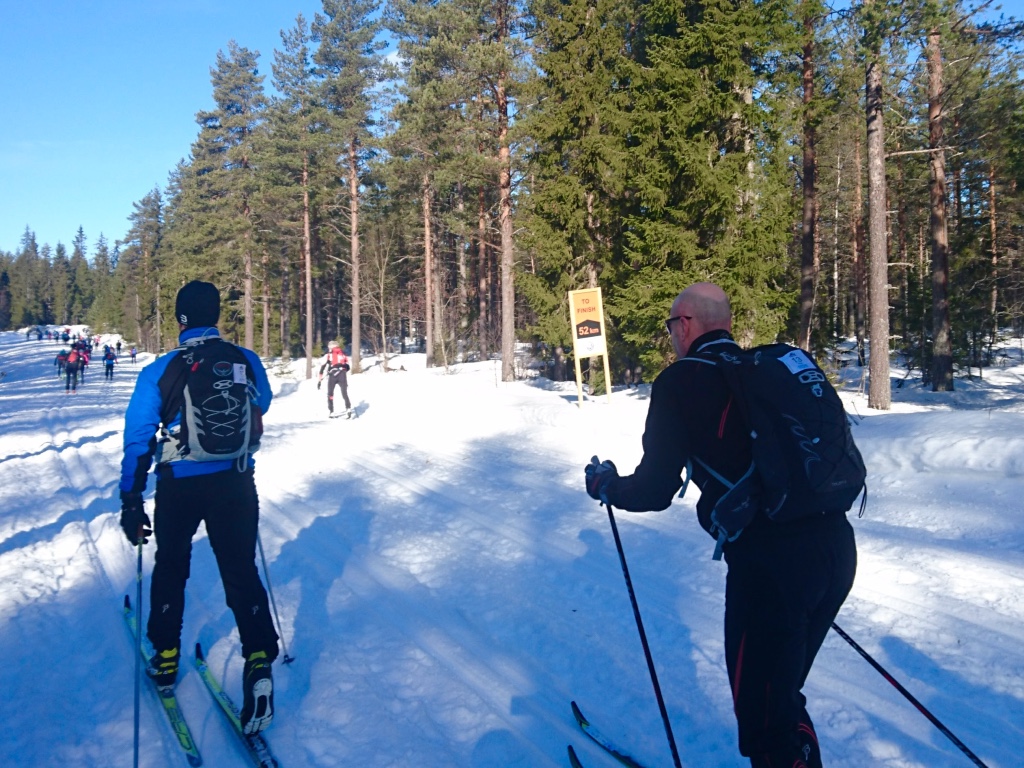 The sign says 52K to finish. I found this funny as it seemed ridiculously far.

It was relatively warm out, and soon I was passing people who had stopped to change or rewax there skis. Happily, my kick wax was working perfectly, although I was too warm. I decided to wait for the first aid station and see if I still felt like taking off my shell jacket then. 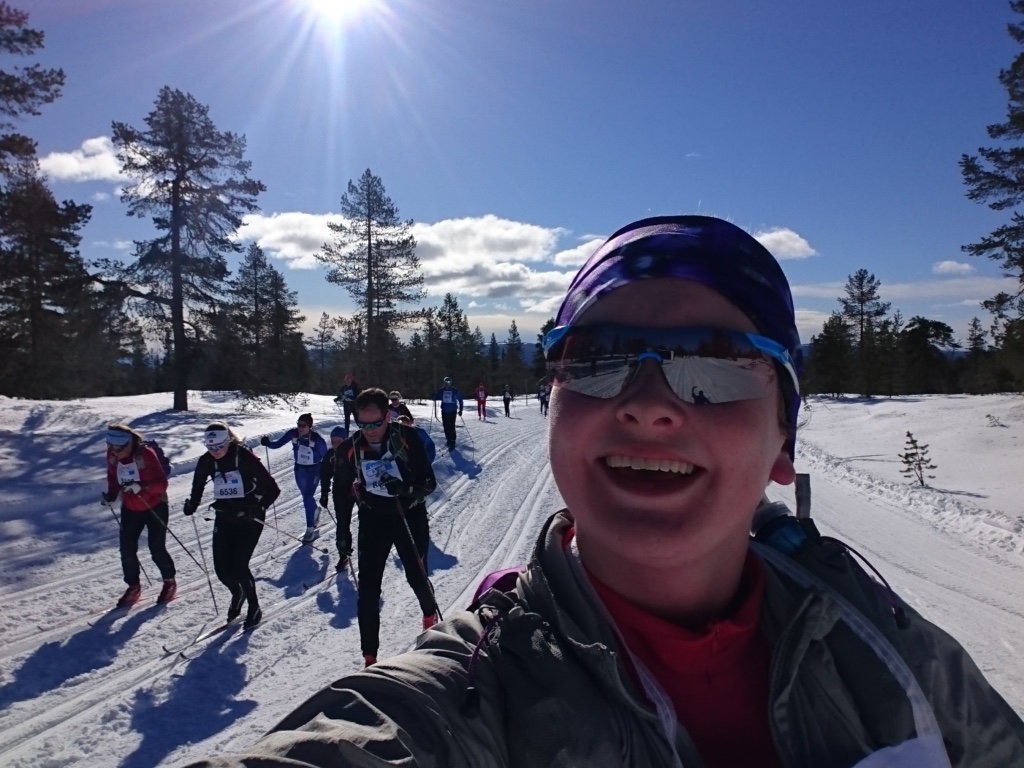 This turned out to be a good call. As the course climbed, the terrain grew more open and occasional chilly gusts of wind cooled me off. I marvelled at the number of people sitting along the course, spectating the race. Whole families had skiied up, dug benches in the snow and were merrily grilling hot-dogs over camp fires while watching racers go past. I idled wondered how many of the spectators would be there if the weather weren’t so great.

At each aid station, I had a volunteer refill the soft flask I was carrying. I was trying to minimize the volume of drinking water I carried, since whatever I drank during the race wouldn’t count towards my overall backpack weight at the end of the race. Still, refilling the bottle at every end station turned out to be pretty clumsy. I had forgotten how the combination of ski poles with velcro straps and gloves numbs your fine motor skills! 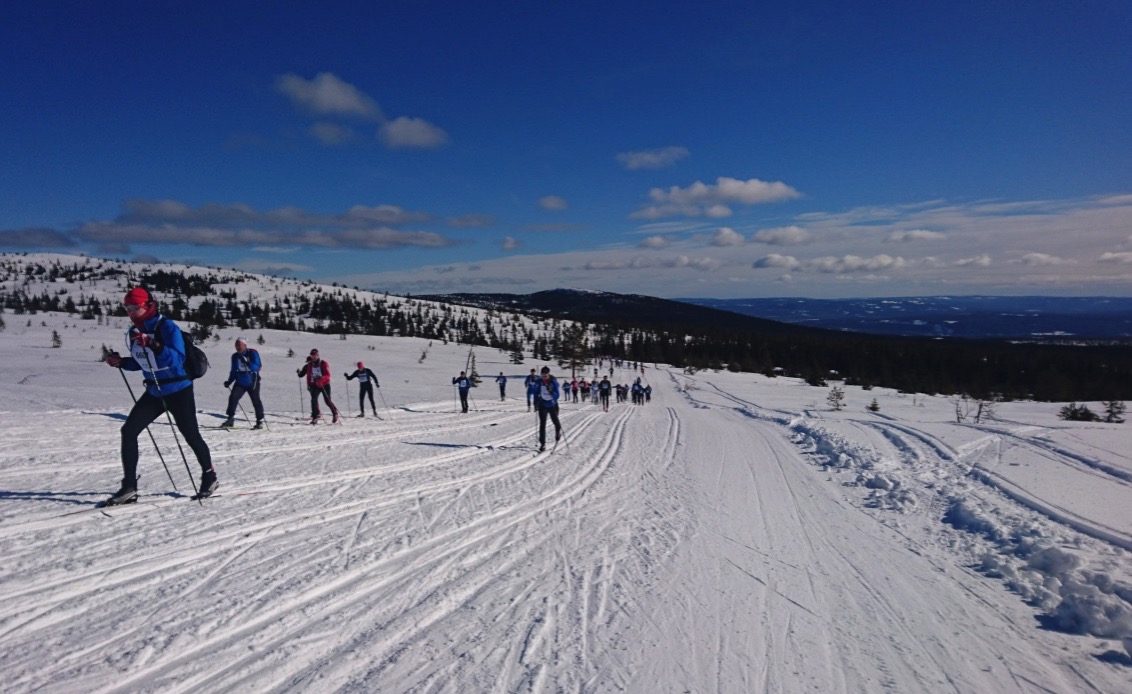 Views from the Birkebeiner course.

An hour in, the first big climb was over, and there was the blissful relief of whizzing downhill and across a flat section. Unfortunately, I was losing time to people around me on the flat section. Try as I might to double pole powerfully, I still can’t seem to muster the force that many others can.

I fidgeted with my bib continually. It’s designed with a loop around the neck and a drawstring that goes around the waist, but my torso was too short for it so it often rode up. I wished I had thought to secure it with some safety pins. As I poled, the cuff of my glove pushed my watch strap up and down, rubbing my wrist raw. I tried to pull my glove cuff over my watch, but it didn’t help and soon a glove/watch blister formed. 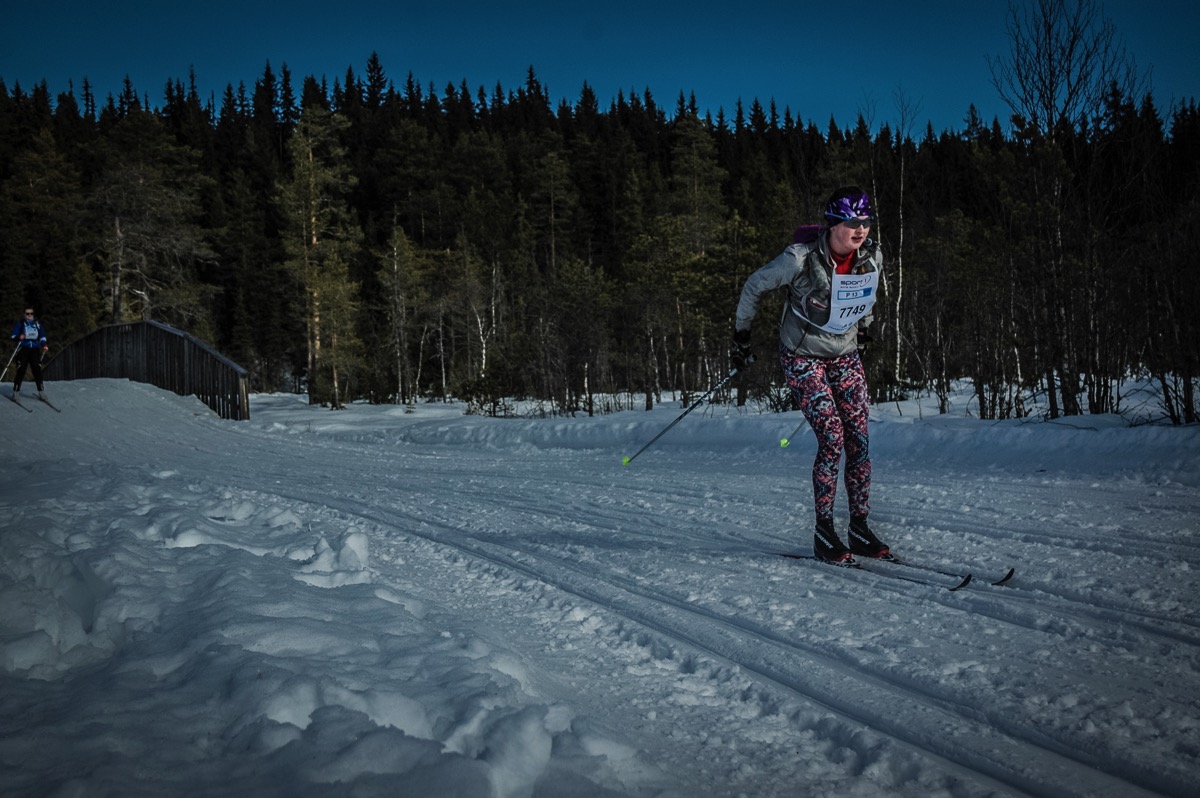 Double-poling along a flat section. (This photo from the race organizers has a weird exposure - it was still sunny out!)

The course continued to climb gradually. It was a gorgeous day to be out and I was enjoying it, until I hit a low point around 30K. It was then I realized that I was getting tried, and that I still had more than 20K to go. I identified the source of my fatigue as not enough calories, and consumed the magical double espresso gel I had hoarded for just this. It was hard to eat enough with poles and everything, and I guess I should have had some snacks between the hotel breakfast at 6 am and my 9 am start.

To cheer myself up, I started to examine the bibs of those around me and realized that most were marked as being from wave 10. That meant they had started a full 20 minutes ahead of me! I’m beating you by 20 minutes, I silently crowed at another racer, and you. and you!

After Sjusjøen, the last 20K of the race are mostly downhill. Some of the downhills were steep, and the trail was dived into two sets of icy tracks from people snowplowing. Signs indicated that slower skier should hold the right track. I jumped into the left track and whizzed by some people snowplowing, barely braking. Why ruin the free speed? Still, I soon ended up in line behind someone snowplowing in the left track. Then a skier in the right track fell over, and suddenly there was a pile-up going on in front of me. Ok Molly, use your backcountry skills! I thought, and jumped out of the trail, neatly skirting around the pile of fallen skiers.

I continued on, feeling cocky as hell. When I ended up behind another snowplowing skier, I decided to try my jump-off-the-trail manoeuvre again. This time, it didn’t go so well. I hooked my skinny cross-country skis on something and went down hard on my face. Sun glasses filled with snow, I jumped up and skied on, nursing my scratched hip and my bruised ego. 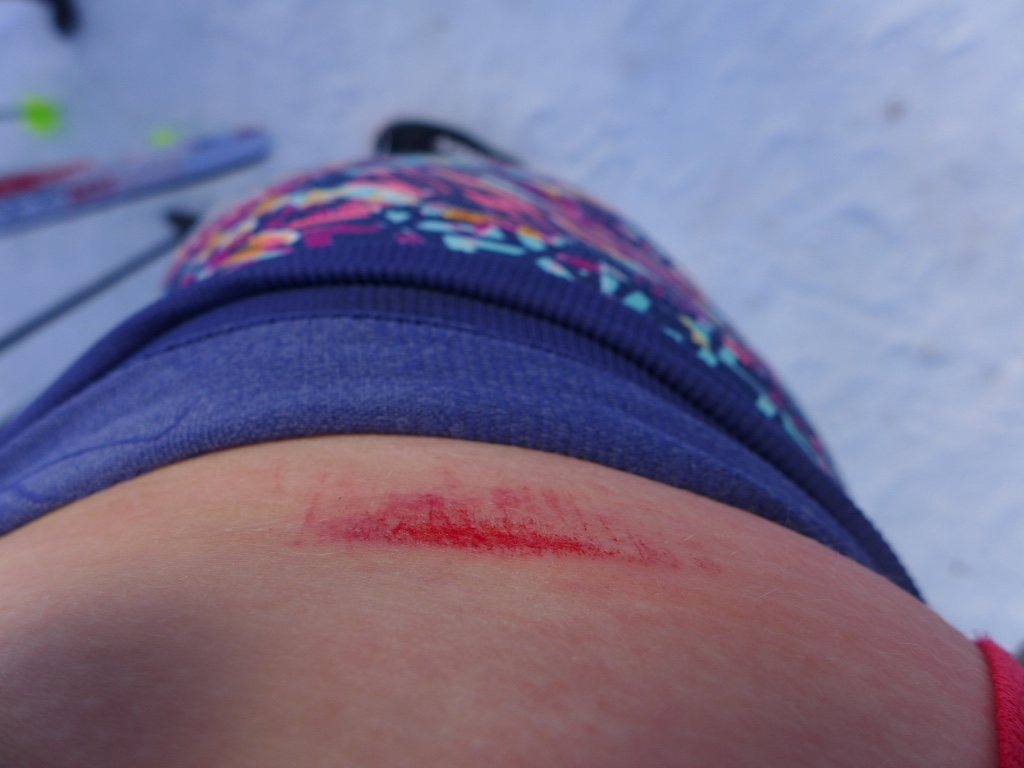 My scratched up hip (photo taken at the finish).

The final stretch of the race whizzed by, and I hammered the final uphill, trying to give everything I had. So I was entering Birkebeiner stadium, and poling the final stretch to the finish. I crossed the finish line, hardly daring to believe it when my watch claimed I had skied the 54K course in 4 hours and 33 minutes. My original goal had been sub 5-hours - I beat that by a long shot! 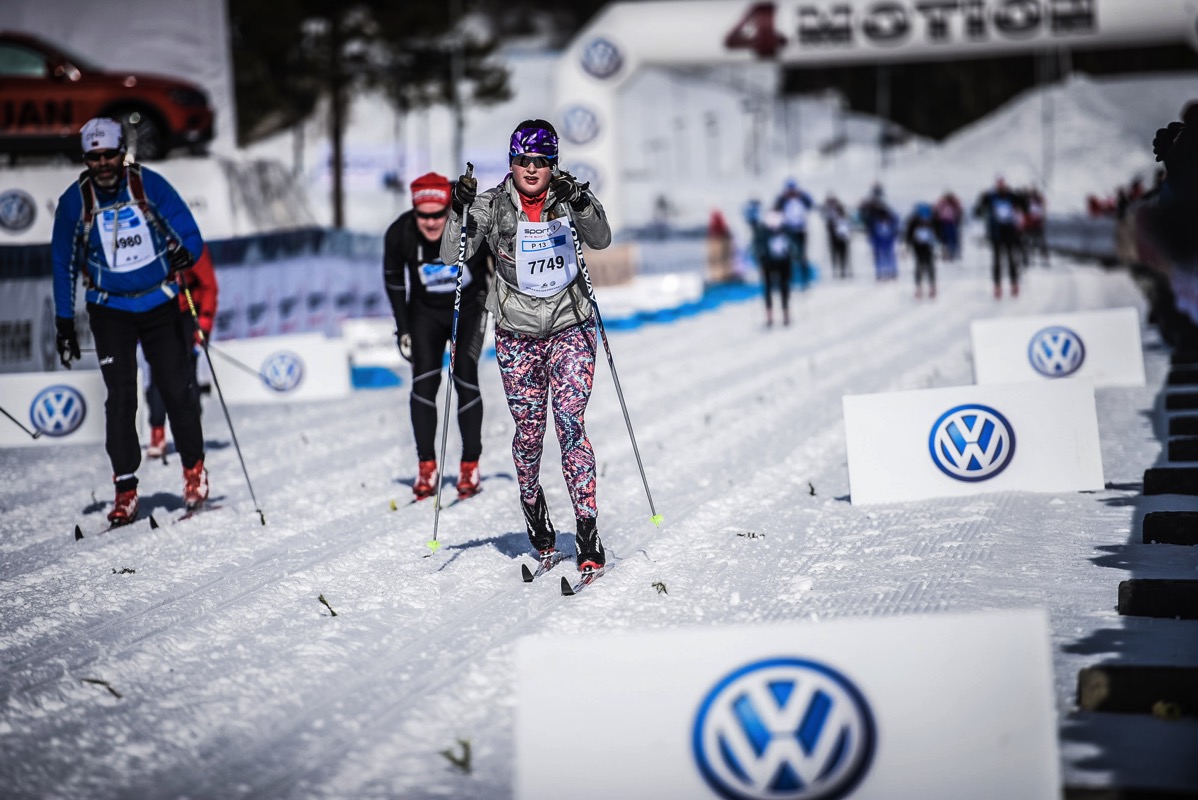 Poling the final stretch to the finish.

While I’m still not a cross-country racer by any means, the Birkebeiner ski race was a good test of fitness and I’m glad I got to ski over the mountain on such a beautiful day. Now I just have to learn to double pole powerfully! 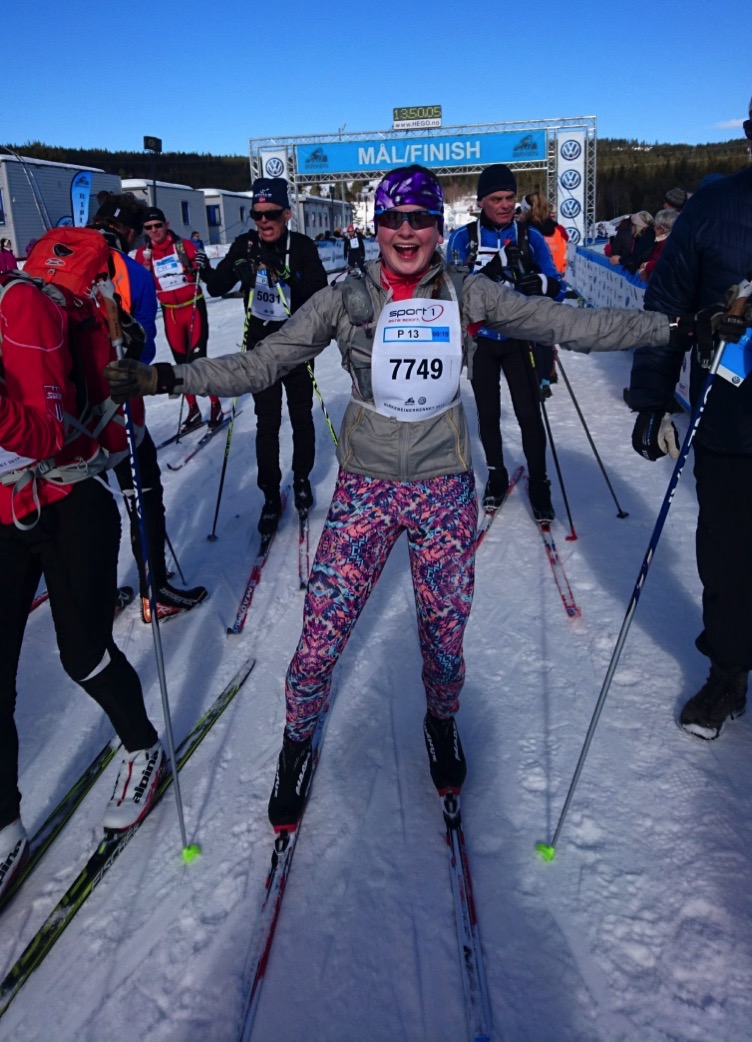