What's in a season?

I’ve been posting a weekly ‘training log’ since January (you can find them all here), and I realize it might not be entirely clear what I’m training for. It has taken me a while putting together the pieces of my running season this year. I wanted to do some big races that challenge me at the same time as I want to avoid injury. Although I considered trying my hand at some longer ultramarathons, ultimately I decided to limited myself to sub-60K distances, and to challenge myself with some new sub-marathon distances. It takes years, not months, to develop the strength to run long distances, and I have plenty of time to get there. Here’s a breakdown of the main running events I’m going to do, with my initial goals. It will be interesting to see if my goals change at all throughout the season! 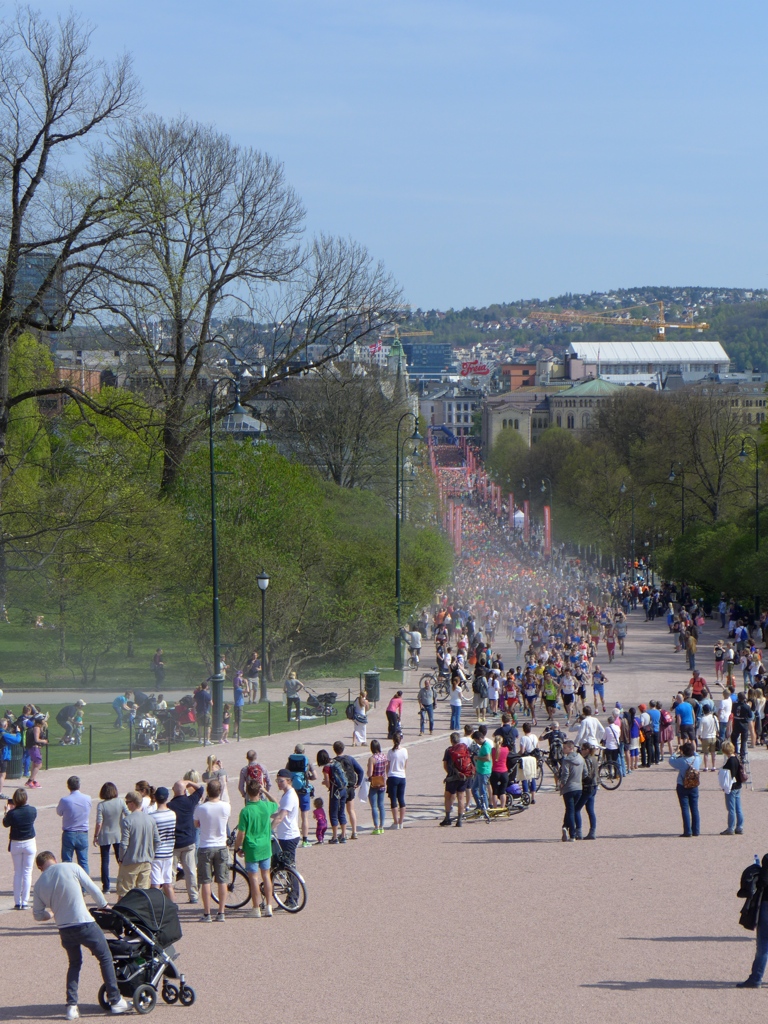 From the start of Sentrumsløpet 2014.

Sentrumsløpet was my first 10K race ever in 2014 (race report here). It is a very large race, with 7000 people already signed up for this year’s event. The course tours the most scenic part of downtown Oslo, and there are lots of spectators. My A goal (given an ideal day) is to run sub 44 minutes on the 10K distance, shaving 20 seconds off my 10K time. I’ve starting doing intervals training specifically geared towards the 10K distance, and in a month we’ll see if the hours circling the indoor track at Bislett pay off! My B goal (if my day is only ‘OK’) would be another sub 45 minute 10K, and my C goal (given a bad day) would be a course PR, or sub 47:21.

Ecotrail is a trail running series originating in France that highlights urban trail systems. Given Oslo’s extensive public forest, my home city is an obvious place to host such an event. I’m running the 45K distance, which is the second longest. Although this is only slightly longer than a marathon, I know that some of the trails are quite technical and the finishing times from last year reflect that. I don’t have any time goal for this event. My goal is to try and enjoy it! I still believe I performed under my potential at Oslo Skogsmaraton last year because I wasn’t enjoying myself and let negative thoughts get to me. Ecotrail will be all about positive thinking, and not about finishing times. Given last year’s finishing times though, I expect to finish somewhere around the 5:30 mark. To train for Ecotrail, I’m planning to build my weekly long run up to around 30K, hitting up technical trails along the way, which I think should be plenty for this distance. 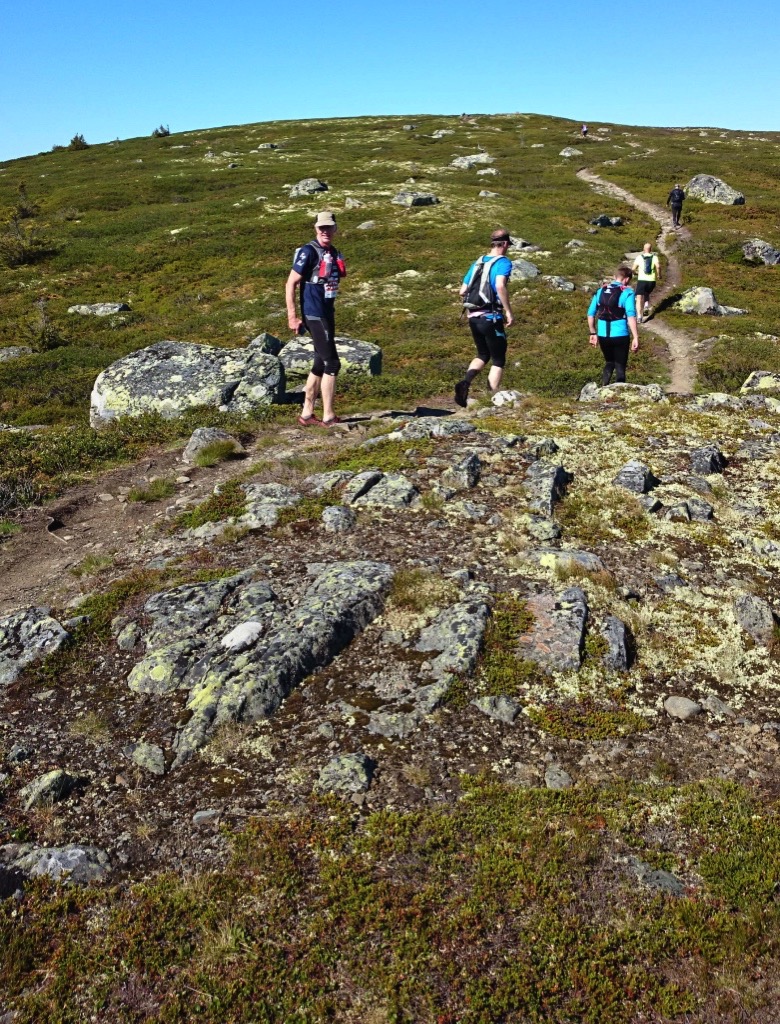 From the Ultrabirken 2014 course, the last 10K of which is the same as the trail half-marathon I’ve signed up for this year.

Birkebeinerløpet is a running race in the ‘Birkebeiner’ series, famous for the iconic cross-country ski race. I’ve done the big sister of this event, the Ultrabirken, which dovetails the Birkebeinerløpet course for the last 10K. I’ve actually never run the half marathon distance before, and this seemed like a good opportunity. Additionally, I signed my incredible mother up for this race as her Christmas present (I always give great presents like that :P), so I figured it would be fun to race at the same time as her. My A goal for the day is to finish in the top fourth of my class, which based on last years times would require me to run a 1:48. My plan to train for this race is to throw in some longer, half-marathon paced runs as soon as I recover from Ecotrail.

A promo picture for Hornindal Rundt, taken from the website. I’m expecting it to be stunning Norwegian mountains at their best.

My monster race of the season is the OCC in August (see more below), and during the summer I need to put in a lot of vertical to prepare (this means fun adventures in the mountains!). I decided it would be good to plan a shakedown race that also had lots of vertical, and settled on Hornindal Rundt. I’ve thought about doing this race for a couple of years now, although I really would love to do the long course (75K, 5600 meters of vertical). This year I think the short course better suits my needs though, which are training rather than pushing myself to the limit. I expect the course to be stunning, and for my quads to be completely destroyed at the end of the day. Based on last year’s results, I’m hoping to finish in somewhere between 7 and 8 hours, with a smile on my face. 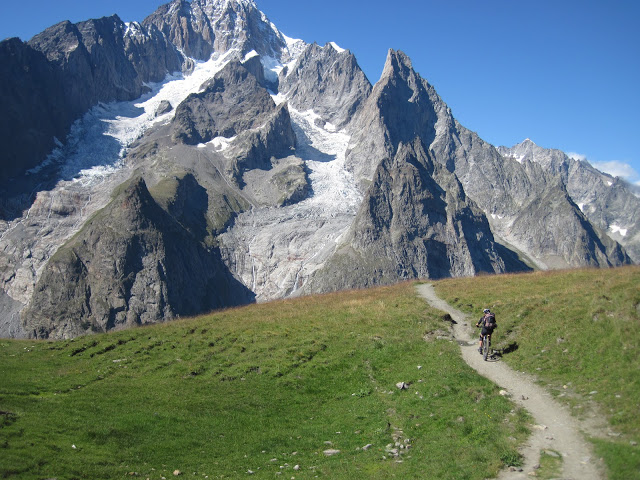 As I’ve waxed poetic about before, something about the trail that encircles Mont Blanc enchants me. I’ve biked it, I’ve hiked, and now I’m going to run one third of it in one day. The OCC starts in Switzerland and ends in France, after tackling som epic climbs and spectacular scenery. I expect this to be hard; the average finishing time last year was ten and a half hours. That’s practically walking pace! I don’t really have any time goals for this event; just like Ecotrail, I mostly want to finish strong and enjoy myself. And start getting to know the course as a runner so that maybe, someday, I’ll be able to tackle the grandaddy of European ultramarthons: UTMB.

So that’s my race calendar for this year! All that’s left to do is diligently train for all of these adventures. Here’s my training log for last week.

I was in Trondheim to do some experiments and spent quite a lot of time in the lab. As a consequence, I wasn’t able to do in my weekly interval workout or long run. In the face of stress it’s sometimes better to back off than push yourself to the breaking point.

Monday: I got up at 5AM to catch my flight to Trondheim, and was at work until 8PM. Probably I should have just relaxed, but I wanted to test out the skiing conditions in Trondheim. Dad and I skate skied around the illuminated ski trails near my parent’s house. (Side note: if anyone ever asks me “Why Norway?”, public, free cross-country ski trails that are lit up at night in every city is a heck of a good answer!) Skate sking is hard work, especially on the hilly trails of Estenstadmarka. 8K, 254 vertical, 42min

Tuesday: I had planned to get in a long run after work, but I got delayed in the lab as well as on my way home. By the time I was ready to start running I was stressed, hungry and the sun was about to go down. I started running but quickly realized that my head wasn’t in the game. I jog 4K and went home to relax. Good decision. 4.4K, 113 vertical, 30min + 20 min AM yoga

Wednesday: Easy midday run with mom, did some drills and strides to shake off lingering calf tightness. It worked beautifully, my calves felt totally fresh after the run. Inspired by watching the Tour of Canada on TV, I went out for another quick skate ski in the evening. Run: 8.5K, 93 vertical,1h2min, ski: 7.7K, 265 vertical, 41min

Thursday: The weather was beautiful and I took a break from running experiments in my windowless lab to get in midday a run along the river. There was quite a lot of snow even at that low altitude, although I imagine it will melt quickly with sunny days like that.  11K, 164 vertical, 1h12min + 1h AM yoga and strength

Saturday: For the first time in weeks I was in Oslo for the weekend, and I decided to take advantage of the great cross-country skiing we have here in the south as well. Audun and I took the ski bus to the far north of the Oslo forest and skied back to Oslo. Although the route was net downhill, there was lots of climbing to begin with and the waxing conditions were very challenging, with the temperature hovering right around freezing. 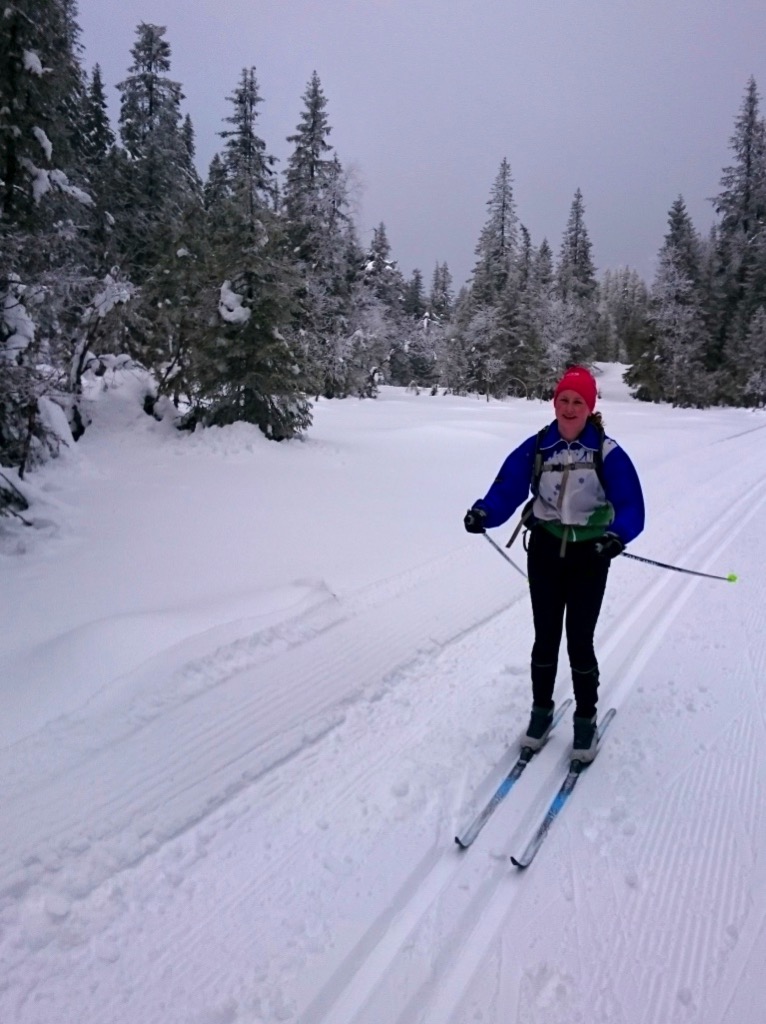 On route to Oslo!

This was by far my longest ski this year - over 40K! - but I felt surprisingly good afterwards. I guess the net downhill (and the waffles we stopped to eat along the way) helped. 41.4K, 1090 vertical, 3h56min

Sunday: We spent most of the day spectating the biathlon world championships at Holmenkollen. It was really exciting being the crowd; biathlon is a pretty nerve-wracking sport because every time the skiers stop to shoot it really shakes up the ranks. 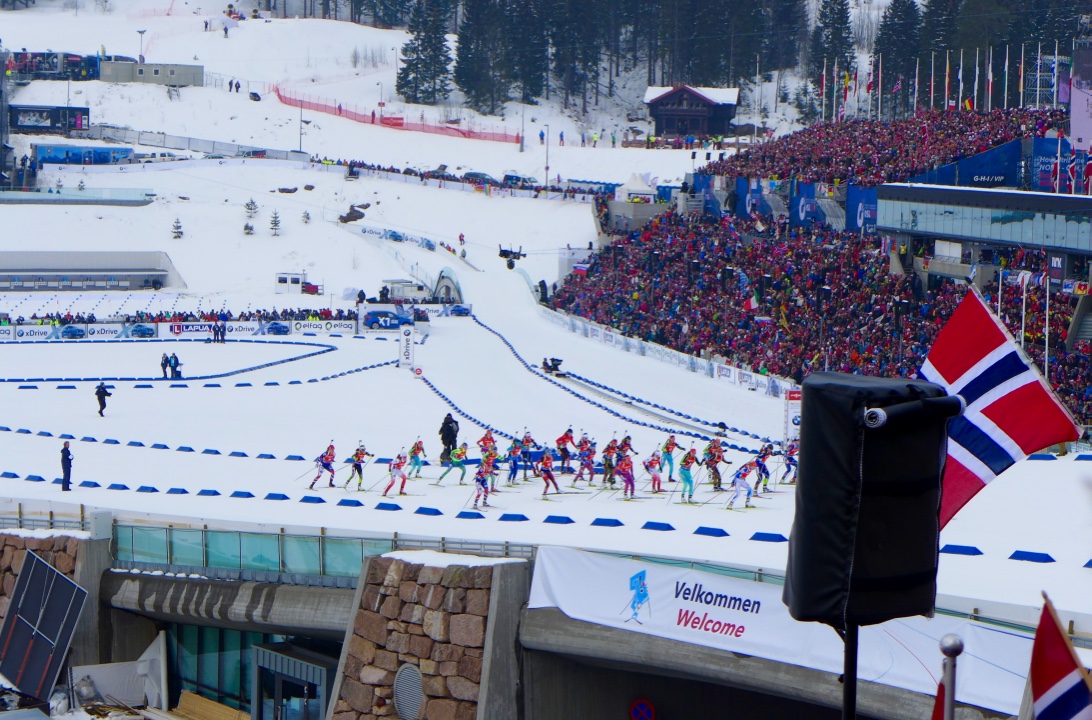 The pack heads out at the women’s mass start, eventually won by Frenchwoman Marie Dorin Habert. A Norwegian took the gold in the men’s mass start though, much to the crowd’s delight!

I was feeling restless when we got home and went out for a run before dinner. I felt good, and I think that this relatively easy week (running-wise if not skiing-wise) was what my body needed. 7.1K, 105 vertical, 44min