Easter is a big holiday in Norway, not because of religion, but because of skiing. As the days grow longer, the weather in the high mountains starts to get sunnier, softening the wind-blasted winter snow. All over the country, Norwegians dust off their skis and take advantage of the three days of public holiday to take a long weekend, or a long week, off.

As with all of my vacations, I go crazy daydreaming and planning well in advance. This year, I had my sights set on the newly established Jotunheimen Haute Route, which crosses ‘the Home of the Giants’ and ascends some of Norways highest mountains. In addition to Audun, our friends Vibeke and David planned to join us.

As we head to Jotunheimen now, it looks as though the winter storms haven’t quite died down and we may not get the weather necessary to summit big peaks. Luckily there is a Low Route running parallel to the High Route, so we are still going to attempt our crossing of Jotunheimen. No matter what I’m looking forward to a week of adventure! 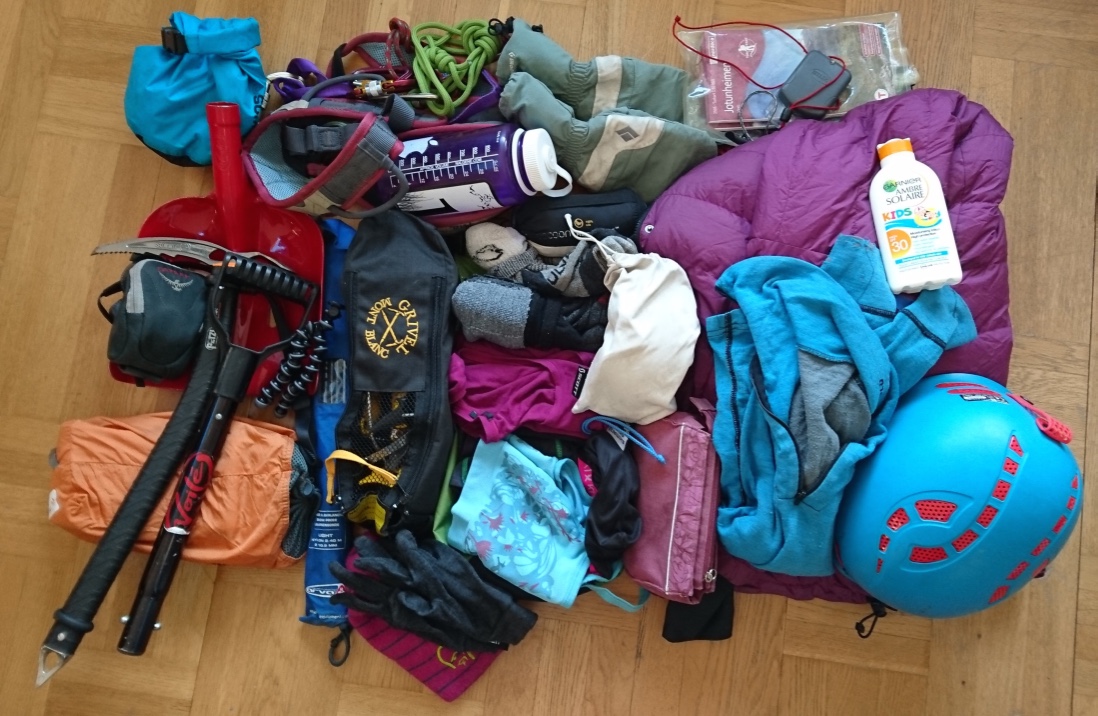 What’s in my backpack.

Due to my departure to the high mountains, I’m recapping this week’s training early. I had a really good week, and was able to hit all of my goals training-wise. Let’s hope I haven’t tired myself out too much for skiing this week!

Monday has become long run day, and this time I was able to get out in the middle of the beautiful, sunny day. I optimistically thought that most of the snow would have melted around Maridalsvann, and ended up churning my way through several kilometers of slushing before rejoining the mercifully bare road. I had fun though! 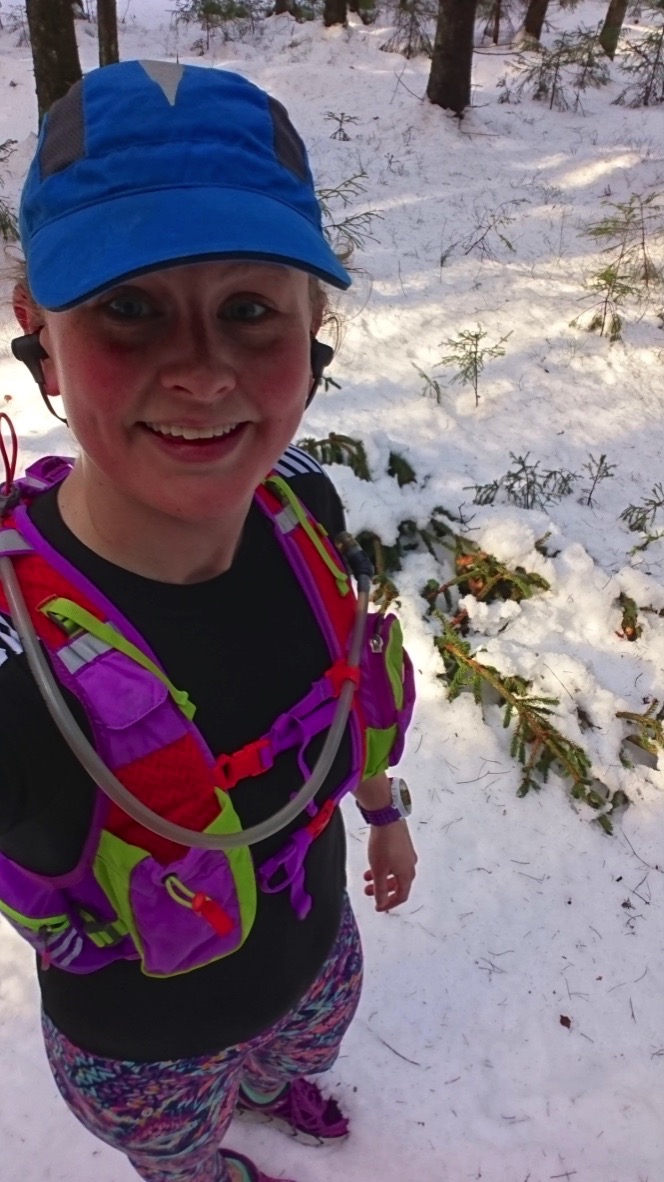 After running most of the way around Maridalsvann, I wanted to find the ‘secret’ system of trails I’ve been exploring, this time from the opposite end of the trail system where the trail is more faint. I headed off behind the farmhouse where I had popped out from the trails previously, and started following some tracks in the right direction. Upon closer inspection, I realized that the tracks belonged to a moose and not a human. And then I saw the moose. It was standing maybe 100 meters away, off the trail, in a stand of trees. For those of you who have never seen a moose, they are impressively tall and large and you don’t want to provoke them. The moose started to walk away from me, and I figured I could follow the trail around the trees it was standing in. I passed it a second time, glaring at me through the trees, and spent the rest of the run jumping at moose-like fallen tree branches. 25.5K, 340 vertical, 2h50min + 20min strength session

Bike commute to and from work. I’m still using my winter bike with studded tires, but the bike path was ice and snow free on Wednesday - I’ll be back on my road bike after Easter I think. 31.6K, 369 vertical, 1h45min

Time for my weekly thrashing at Bislett stadium. This week Audun went with me, although he had given blood earlier in the day and so took it much easier than me. I was glad of the company as I once again circled the monotonous indoor track. This week I did eight 400 meter repeats, which I still think are pretty fun because you feel like you’re going so fast! My foot pod reads a little faster than I’m actually going, which is encouraging but not useful for practicing holding a pace. Hopefully the outdoor track will open soon and I can get more realistic speed estimates. 10.7K, 34 vertical, 1h + another 90 min dance class 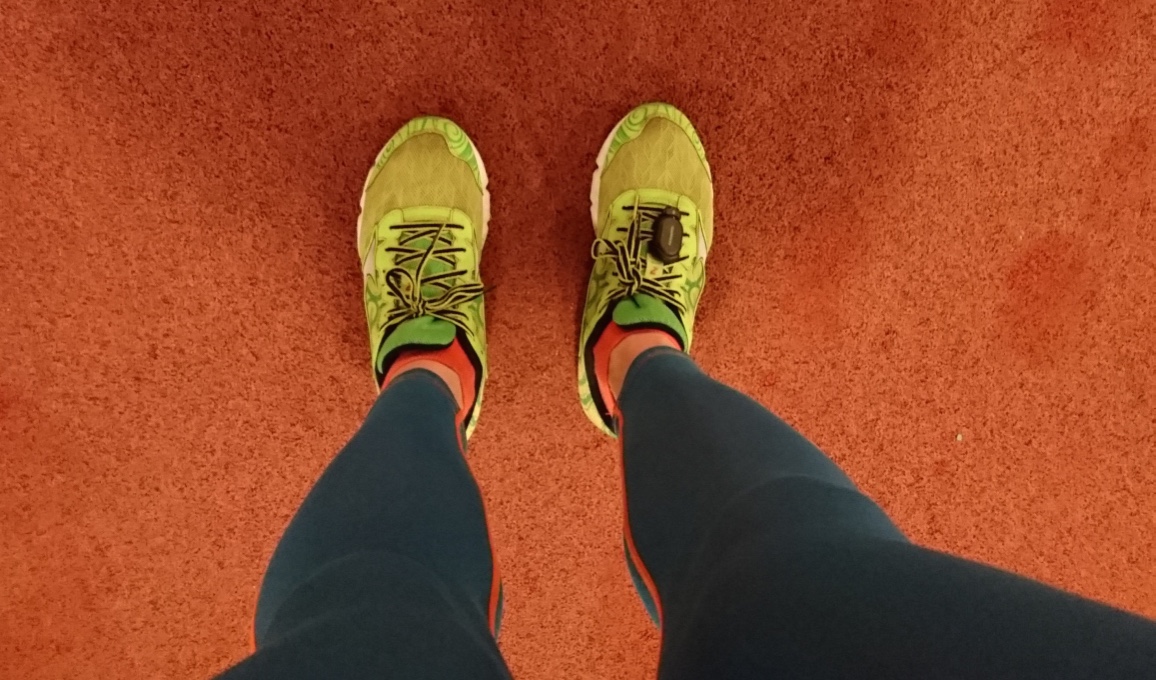 Wearing my fast shoes on the indoor track at Bislett.

Commute on foot. I felt sluggish to begin with and thought a lot about giving up and catching the bus. I think that it’s important to have mental battles with yourself sometimes though, just to prove that you can persevere. So I saw it through. I can always look forward to the last part of the commute, which goes over a big hill through the forest. A great reward after many boring kilometers along the highway! 12.9K, 213 vertical, 1h25min + 20 min strength and foam rolling 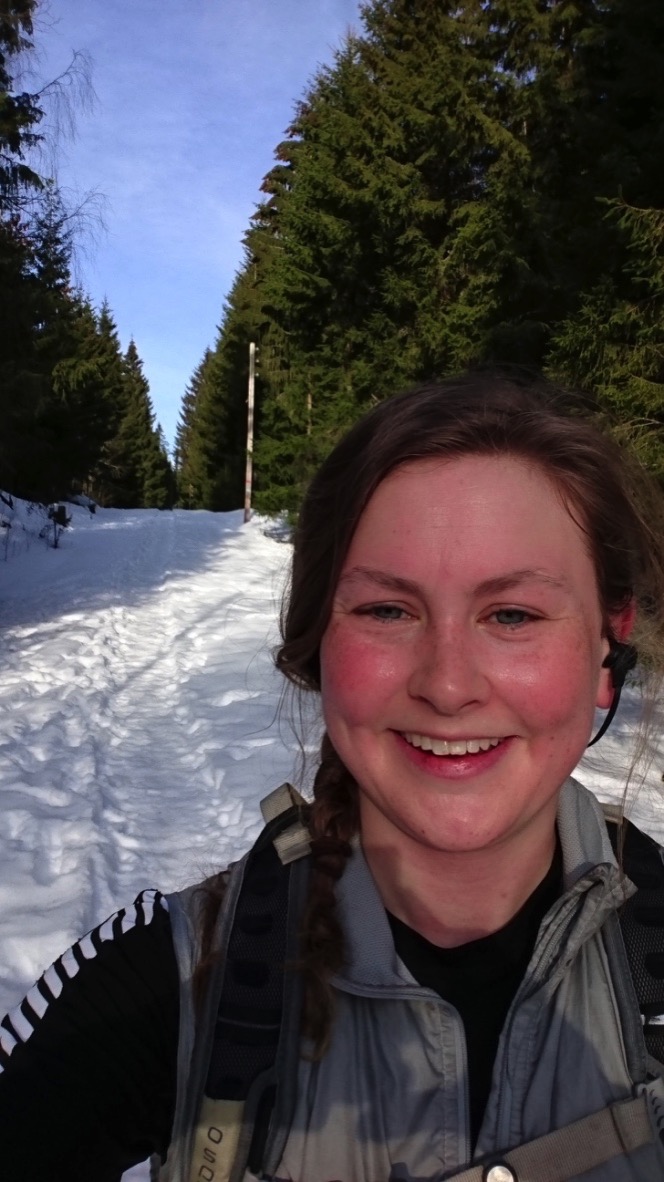