As we climbed up the steep, snow-covered road through the forest, each of us silently switched off our headlamps. First me, then Dad, then Ben, a fellow Vermonter who has found his way to Norway and was joining us for a weekend’s adventure. The darkness slowly sank in and grew brighter as our eyes adjusted. The moon was only a quarter full and surrounded by light cloud cover that diffused the light. It gave just enough light to see the track ahead of us and the dark depth of the surrounding trees. The world was rendered in muted greyscale.

Innerdalen is often called ‘Norway’s most beautiful valley’. Although I can hardly claim to have visited all of Norway’s numerous valleys, I’ll admit that Innerdalen has a certain mystical appeal. The DNT cabin Innerdalshytta located in the valley is spectacularly located below Innerdalståret (‘Innerdal Tower’), a cone-shaped peak that conjures to mind trolls and fairytales. Innerdalstårnet is a spectacular hike, but we were there to ski. Our goal for the next day was Storsalen, a chunky, 1700-meter at the very end of the valley. 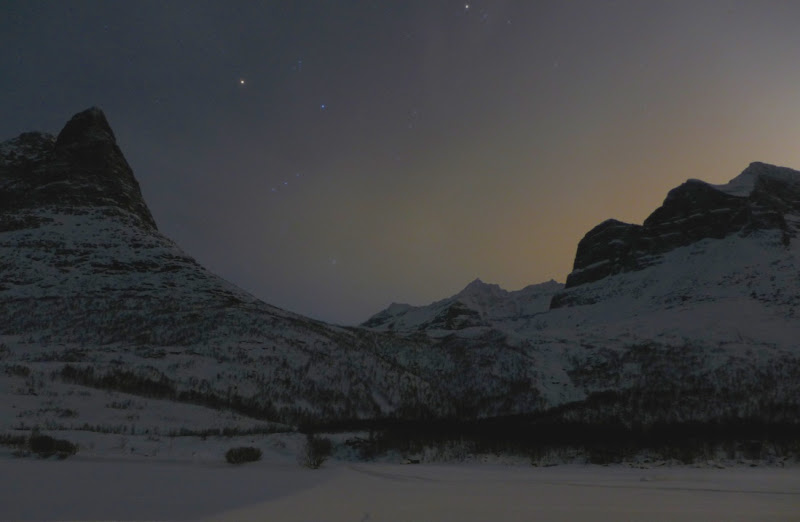 As we left the cabin at 8:30 the next morning, the sun was just warming the tops of east-facing peaks above us. The last weather forecast I had seen before we left Trondheim was for cloud cover and light snows after lunch, but the forecast had changed nearly every day for the last week. One thing you learn about the weather in Norway is that you have to be willing to gamble to win; there is no certain weather forecast! This one looked to be panning out well, although the top of our goal, Storsalen, was encircled in clouds. 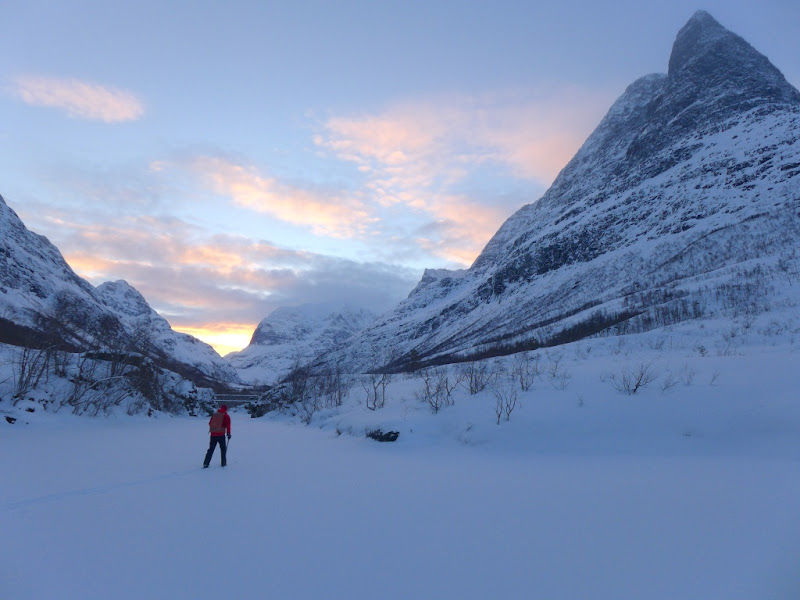 Dad crossing the frozen lake near Innerdalshytta, Innerdalstårnet to the right and Storsalen in the clouds in the center.

It took two hours to ski the 6 kilometers up Innderdalen to the base of Storsalen. We had to break trail, but the snow conditions weren’t too difficult. Ten centimeters or so of fresh snow lay on top of an older, more compact layer. The most challenging factor was the brushy stands of trees we had to worm our way through. I wondered how many days or months it had been since the last people other than us had skied up this way. There were no tracks to tell their tales.

At the end of valley, we finally bushwacked our way above treeline. The valley sides were pretty steep, but the conditions were very stable, avalanche wise. The sun was creeping towards us on the the valley walls, even though it was well past 10 o’clock. The arrival of the sun after the darkest months isn’t sudden; it’s gradual, with a little more light every day.

In the upper bowl of Storsalen, the terrain was barely covered by snow, and we had to weave a path through rings of rocks to get to the summit ridge. The snow that covered the rocks was light and tantalizingly fluffy; this was definitely ’shark’ terrain, where a surprise rock could appear in the snow and bit your skis as you descended. Luckily we spotted a more direct line from the top that looked have better snow cover. 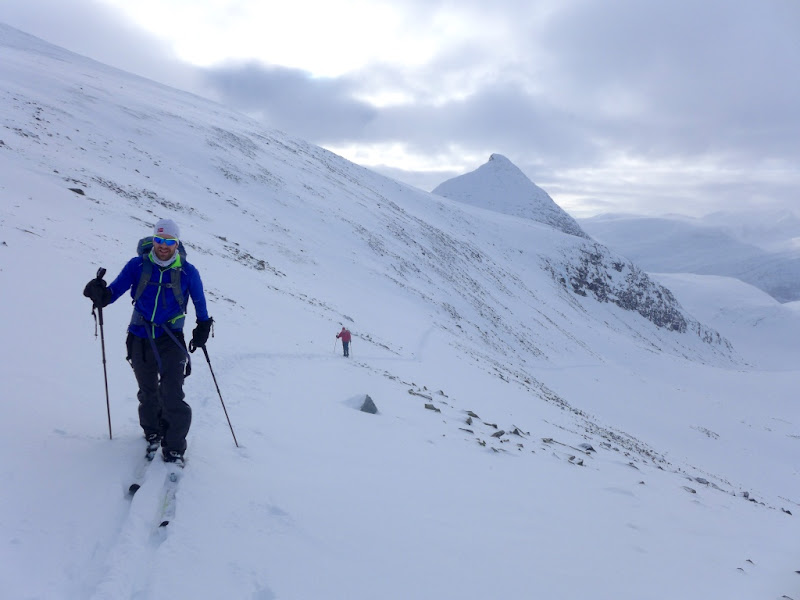 Ben and Dad traverse the final band of rocks to the summit ridge.

The sun had been lurking behind light cloud cover, but it came out in full force as we climbed the summit ridge. I had that magical feeling of being in just the right place at just the right time. The weather was great, the conditions were great and we had the mountain all to ourselves. 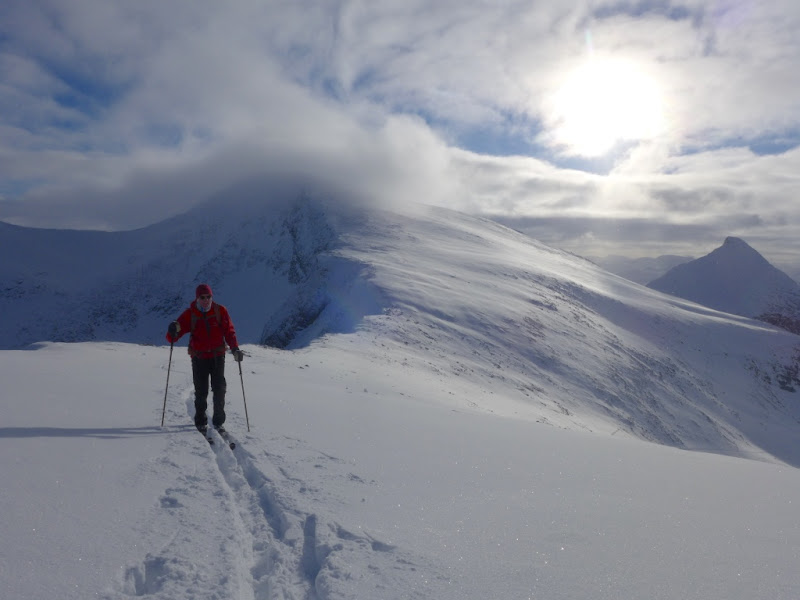 Dad on the summit ridge just as the clouds disperse. 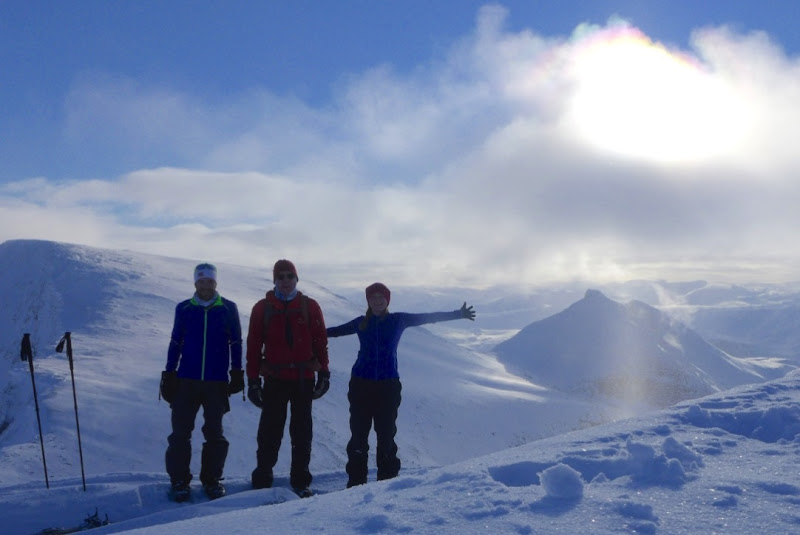 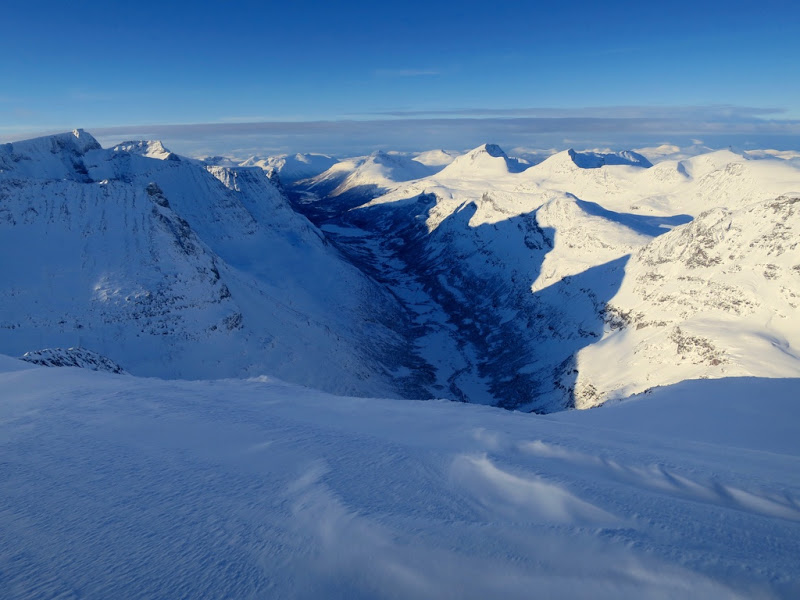 Looking down into Innerdalen from the top; the shadow of the mountains on the valley wall. Photo: Dad.

The skiing on the way down was everything I had hoped for, fluffy and fun. I struggled a bit on my skinny skis at first, mostly because if you go too fast they start to wobble, but soon adapted to the great conditions. I’ll let the pictures from the descent do the rest of the talking: 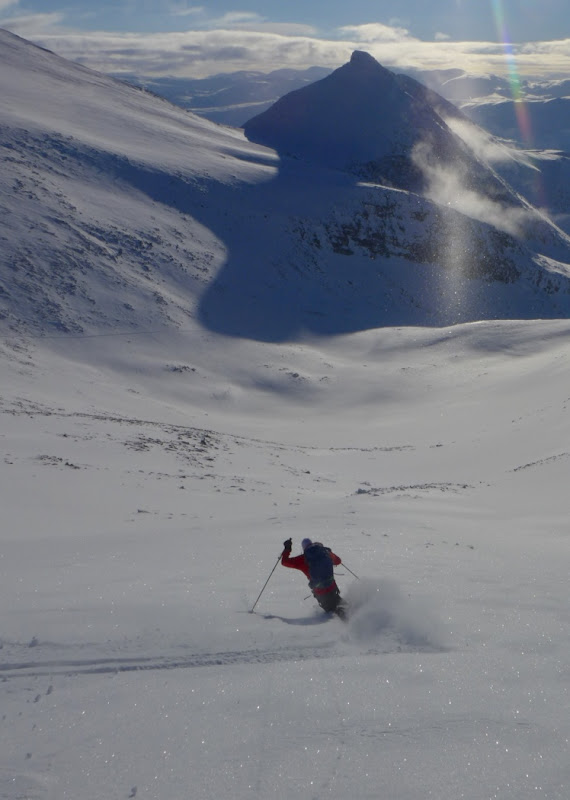 Ben in the summit bowl 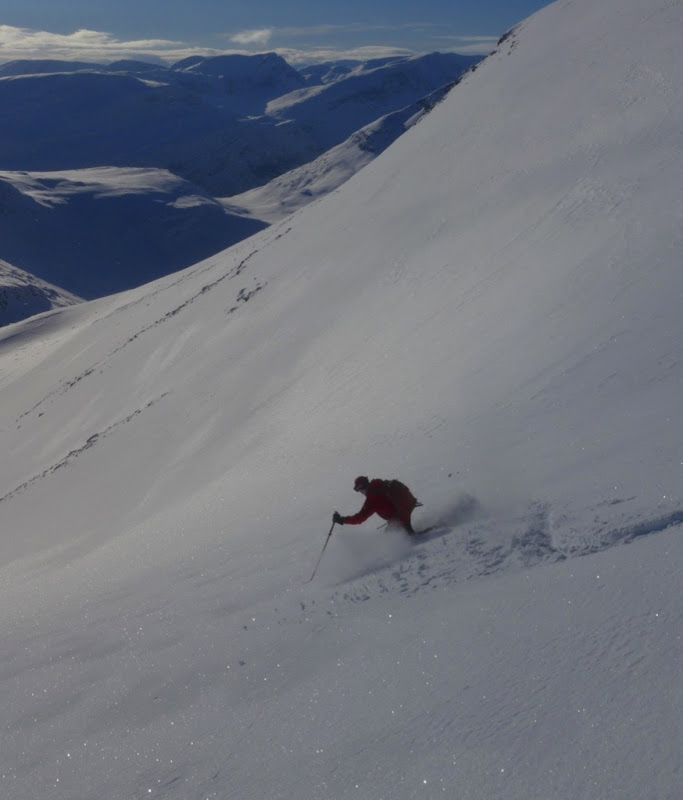 Dad in the summit bowl 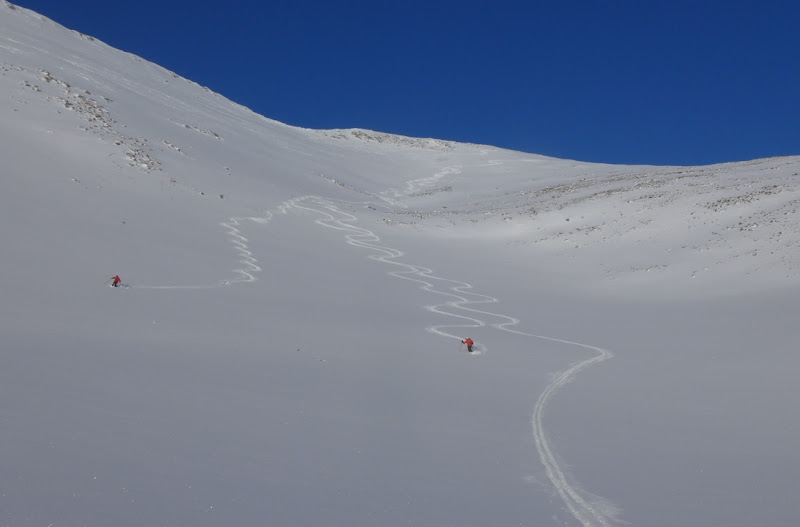 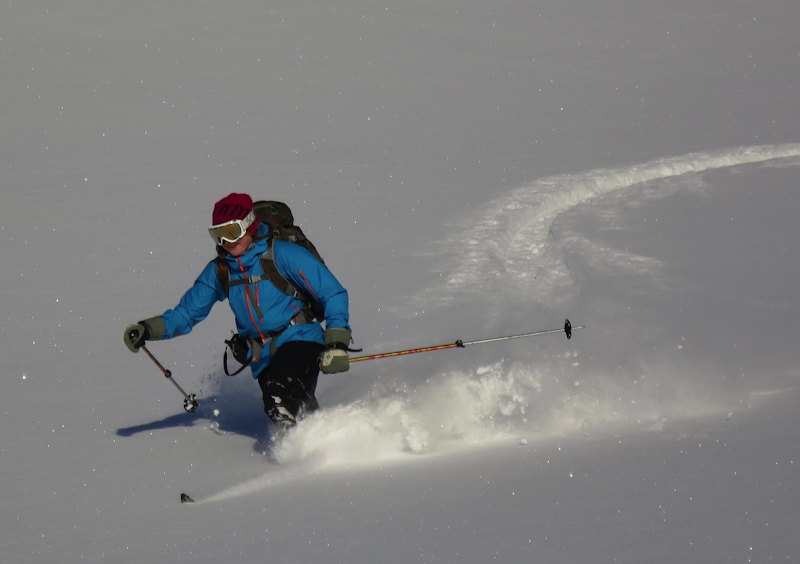 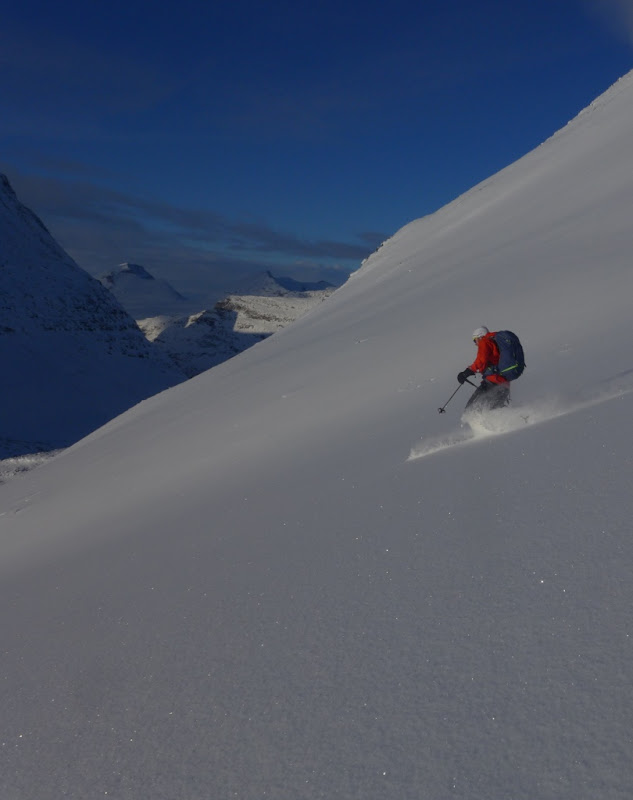 After finishing our amazing run and arriving back to the valley, we skied out 6K back to the cabin as fast as possible, trying to beat the imminent sunset. Our tracks from the morning made for fast going. After we stopped at the cabin for a snack, the sun had already crept behind the horizon. We needed our headlamps for the fast descent back to the car, and the final leg of the day passed quickly and in silence. I was beat, and I took the silence of the others as a sign of fatigue. It was the beautiful fatigue of a day well-filled with great skiing!

Here’s a brief recap of the rest of my (rather light) training week. No pictures because I broke my smart phone a week ago, and don’t bring my camera with me on runs!

Tuesday: Rode my bike to and from work and into the city for dance class. Total 40K biking. It rained a ton on Monday, and the bike paths were basically completely ice and snow free. Although the biking was refreshingly fast, I would rather have good ski conditions and slow biking!

Wednesday: Feeling under the weather, so I took an extra rest day. Better to be undertrained than overtrained. I took the night train to Trondheim to do research in the my lab there.

Thursday: Really easy jog with mom, just to get some fresh air. Just over 5K.

Friday: AM 20 minutes yoga session with some functional core work. Then I took some time off during the day to get in a run. It was sunny out, which was great considering I’m spending all day in a lab with no windows. I ran the river trail, which is a nice green lung in the urban part of Trondheim. The trail was crusty snow with a narrow line of footprints packed out in the center, which made for slow going as I was trying to stay within the packed out area to avoid scraping up my ankles on the crusty snow. Total 11K

Saturday: Because of #PhDlife, I spend most of my Saturday in the lab, but went out for a lunchtime run to keep sane. I choose to run on bike paths and sidewalks which made for a faster pace than Friday. Total 10K + 20 min AM yoga + evening ski to Innerdalshytta.