Last weekend, Audun and I and our friends Joar and Anette drove to Vådalen in Rauland, looking to earn our powdery turns. We planned to camp, but only decided in the car on the way there that we would ski a little ways up a valley to find a campsite. No one had packed quite right, so we all ended up with ridiculous lopsided loads. 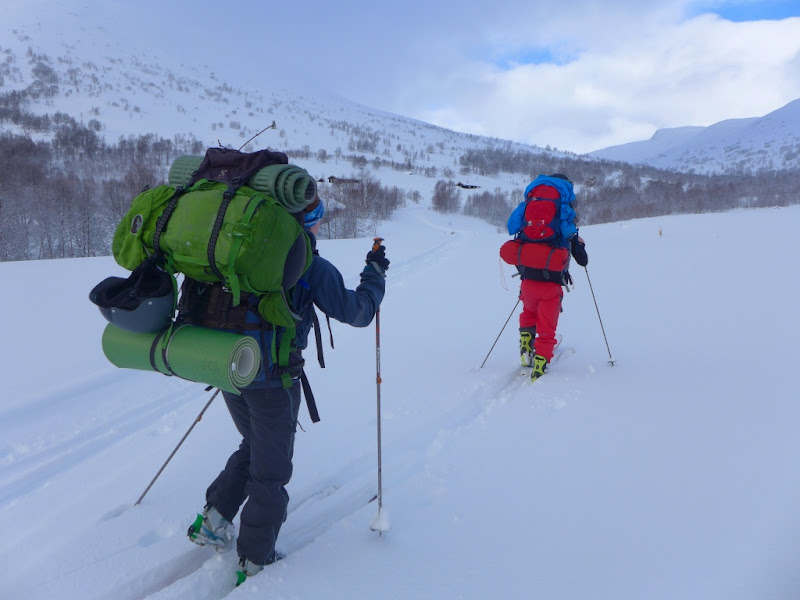 Anette and Joar headed up the valley with big packs

After finding a flat, sheltered area in the trees, we set about making camp. Audun and I were testing the Palace of Spaciousness and Luxury in the snow, although it’s technically a three-season tent. It’s important to challenge the limits of your gear! Joar had a more traditional Norwegian tunnel tent, which does really well in high winds. 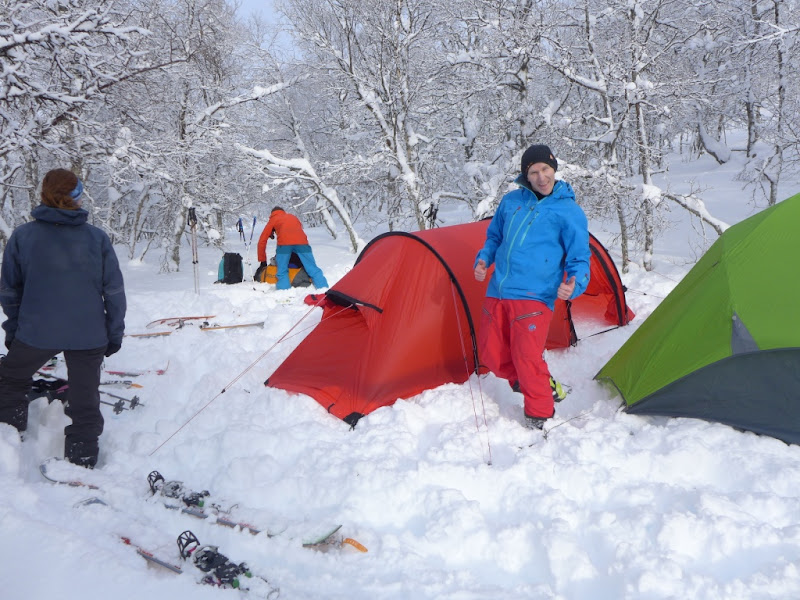 Joar with his new tent, the Palace of Spaciousness and Luxury on the right.

By the time we were done setting up camp, it was lunch time, so we ate our sandwiches standing up before skinning up hill. The light was dramatic, with lots of shifting clouds, and the snow was loose, if a little heavy. 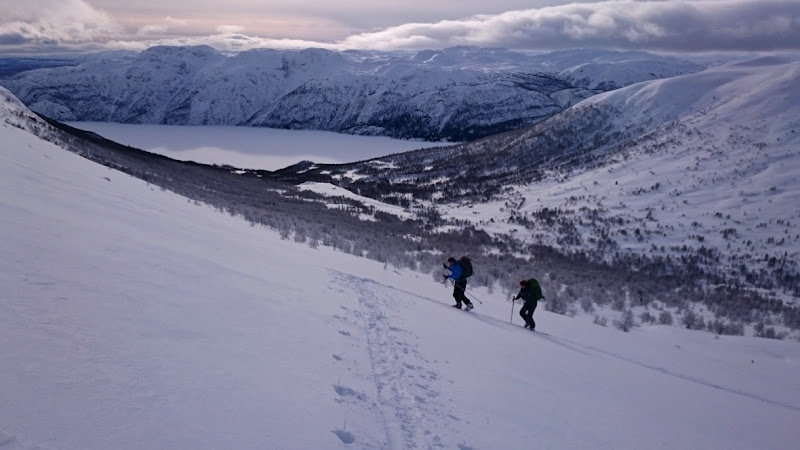 Anette and I skinning up the valley wall.

The downhill skiing was more than acceptable, although I felt hesitant and slow since I was making my first turns of the season. We did two laps up to a ridge where the snow grew hardpacked by the wind. It was maybe 45 minutes before sundown when we decided to call it a day, hoping for some fresh snow during the night that could make for a great day of skiing on Sunday. Not bad, not bad!

Back at camp, I unzipped my pocket and realized my GPS wasn’t there. Gulping, I remembered the sensation of something falling out of my pocket as we took our skins off on the last run. I had looked around, but didn’t see anything in the snow, so assumed it must have been nothing. Suddenly, I was sure I had left by GPS at the top of the last run. After a few minutes of deliberation, Audun and I decided to race the last of the light to the top of the run to look for the GPS. I went as hard as I could sustain uphill. As I panted uphill in my heavy tele gear, I thought about Emelie Forsberg, mountain runner and skier extraordinaire, who just tore her cruciate ligament. This is for you, Emelie, I thought, I’m doing this extra lap now because you can’t.

We reached our previous turn around point and spent a while digging in the snow. No sign of the GPS. As it was starting to get dark, we decided to turn and had a final delicious run down to the campsite, where Joar had dug a fire pit. He and Audun spent the next half hour trying to start a fire with wet wood. They succeeded in producing flames by literally put gasoline on the wood, but it didn’t last. 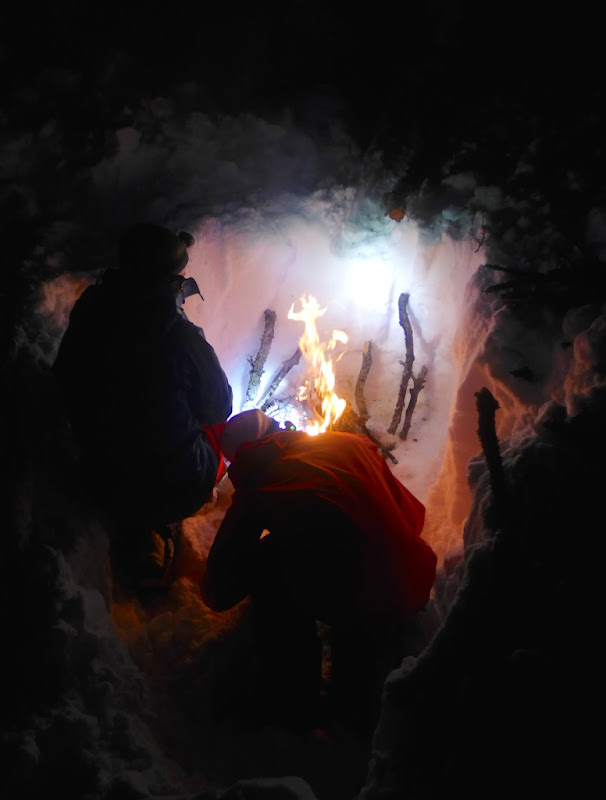 Working on the fire.

After we ate, it started snowing, so we retired to our tents early for a long, winter camping night. When I took off my jacket for the night, my GPS feel out. Oops. At least the extra lap was nice!

Sometime in the middle of the night, the falling snow turned to rain. We all listened to the rain pitterpattering on our tent flys the next morning, and stayed in our sleeping bags for as long as we could justify. Here I am, cooking bacon from my sleeping bag. 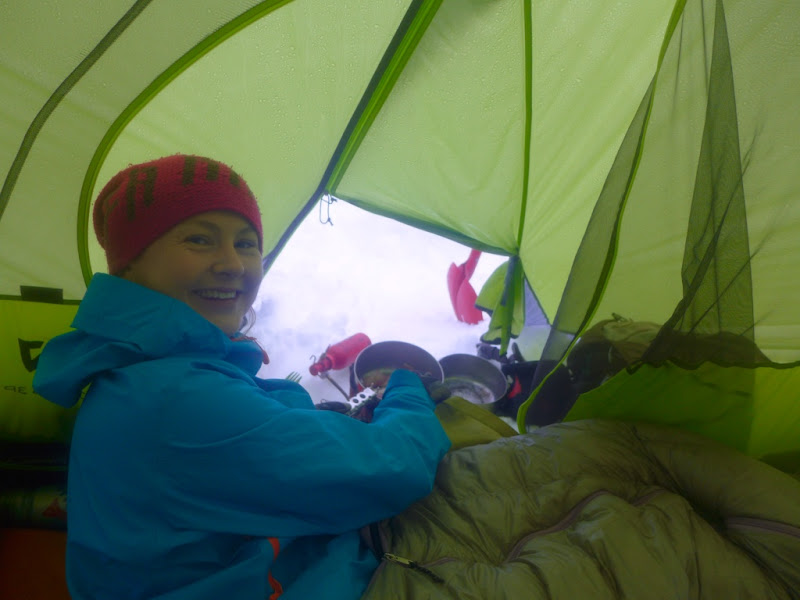 Final we decided we had to go out skiing. Even if it was raining, there was still snow! As we skinned uphill, the rain turned to snow and the skiing conditions grew drier. However, the wind was picking up. We turned at nearly the same place as the day before, but barely talked as we removed our skins due to the howling winds, everyone bundled up in their hoods. 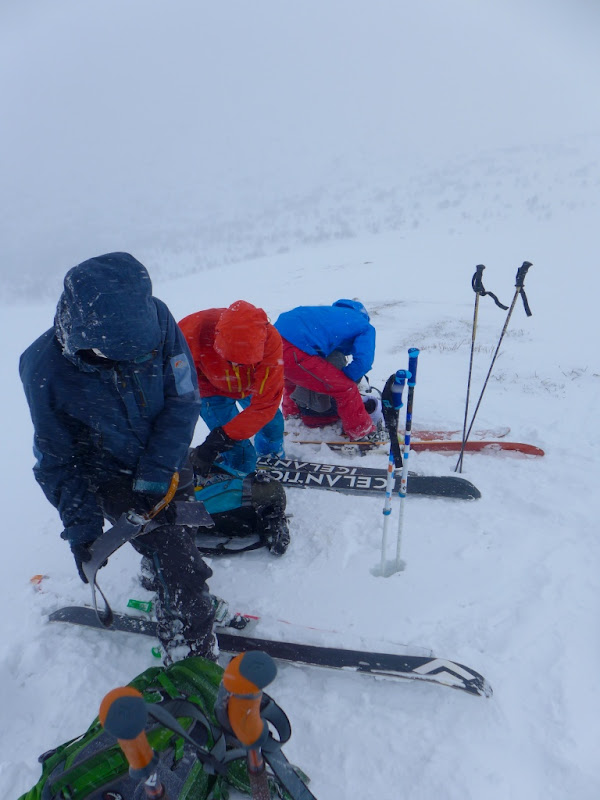 Adverse conditions on the mountain

The skiing down to the rain line was good, so we did another lap, but then we’d had enough wind and wet for the weekend. After packing up the tents and skiing back to the car, I felt incredibly tired. The conditions were challenging to be out in, and it had been a long week!

Here’s a brief recap of what came before:

Monday: Bike ride to and from work. It snowed a lot during the day, and the going was slow on the way home. It was fine as long as you stayed in the track of other cyclists, but wobbly if you went outside. Probably a good day for a fat bike!

Tuesday: Run to dance class through the city. I was hoping that the sidewalks would be less slippery because some of the snow had rained away, but actually the rain had just exposed the ice underneath the snow. Oh the joys of winter running.

Wednesday: AM strength training + evening run with Audun. I was glad we had agreed to go running before hand, because boy was I feeling sluggish! We did about 12K, but with the fairly big climb uphill Grefsenkollen in the mix. The conditions were slow again, but we chatted and the kilometers passed quickly.

Thursday: Trying to avoid the sloppy roads, I ran 10K on the salted bike path into the city to go to another dance class. The bike path unfortunately follows a highway, but I rain through Frogner Park at the end, which was icy but as least slightly scenic. Evening yoga.

Friday: AM yoga and strength training + a long run home from work. I’ve long deliberated an extended commute route which would go through the forest rather than following the highway, and on Friday I decided to pursue it.  They hadn’t groomed the ski trails in several weeks, so I assumed they would be icy. It started snowing right after I starting running, and the trail conditions quickly morphed from icy to snowy. The run turned out to be nearly 20K, and could in some ways be described as grueling, but I was so excited to be in the forest rather than on roads that I didn’t care. I also brought Stroopwafels, special caramel waffel cookies I bought in Amsterdam on the way home from Japan. They tasted fabulous - maybe they will be my go to fuel now?! 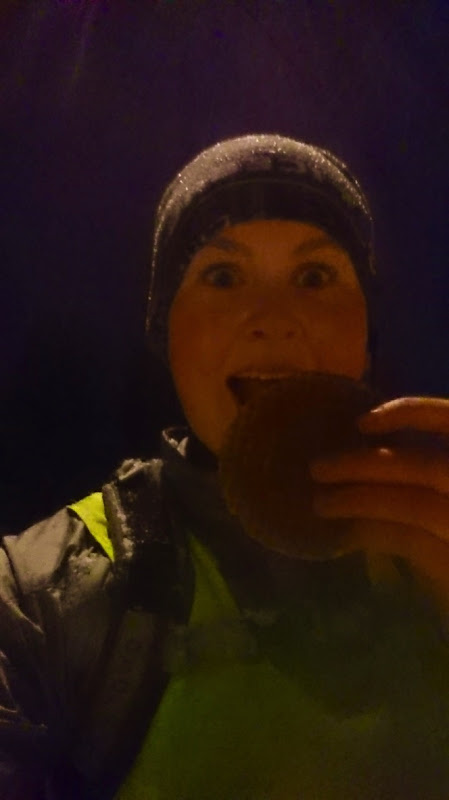 Eating my second Stroopwafel. So. Good.

This was a big week, and I definitely am feeling the repercussions. Time to rest a little and get strong!