The day we hiked over Forrester Pass started overcast but warm, pregnant with the possibility of thunderstorms. We started early, wanting to get over the highest pass on the John Muir Trail before any bad weather could set in.

On the climb. Photo by Annavitte Rand

As we passed above tree line and into a moonscape of rocks, I motored ahead of the group. The view grew more dramatic the higher I climbed, although it was hazy. Long, spiny ridges extended on either side of us. Finally I came over a crest in the hill and saw a small notch in the ridge - the pass! 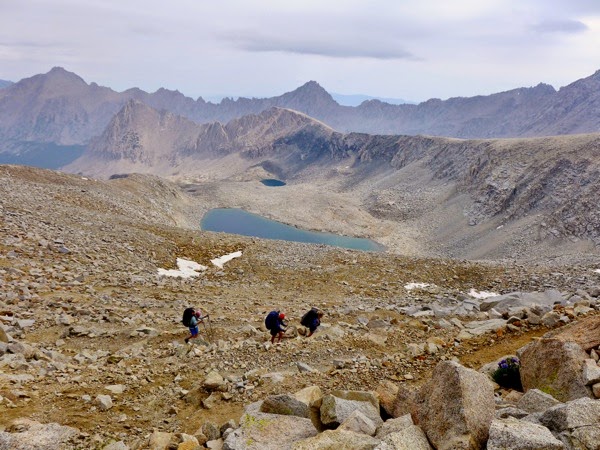 Matt, Pennie and Karin on the last stretch to the top.

I really chugged up the last stretch to the pass. Dad was closing in, motivating me to keep ahead and race to the top. I finally felt like all the time we had spent at altitude was starting to pay off. We were at 13000 feet and I could go hard. The top itself was pretty narrow, and sky pilot flowers dotted the rocks as the only vegetation. The trail heading down the other side was carved into what I would under most circumstances call a cliff. 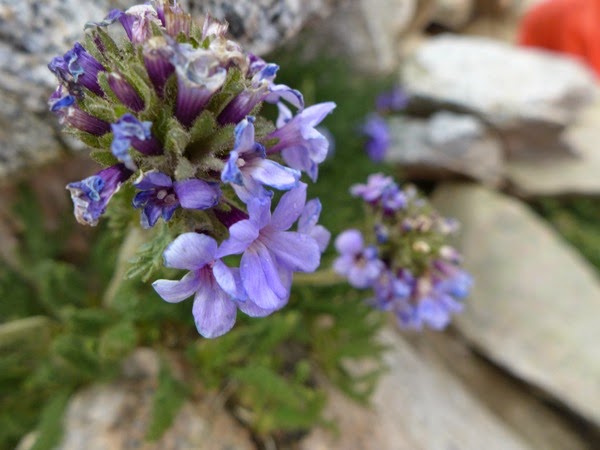 We could see far into the distance, but were unable to identify Mt Whitney. We did, however, identify some ominous grey clouds above the valley in the direction we were headed. I put on my wool shirt, rain pants, and rain jacket in anticipation of some waiting for the rest of the group to arrive. Slowly they trickled in, and I was pretty chilly by the tim I had eaten my blueberry Caveman Bar. We had a quick photo session, and headed down behind a couple to whom Mom regaled the whole Muffintop saga. 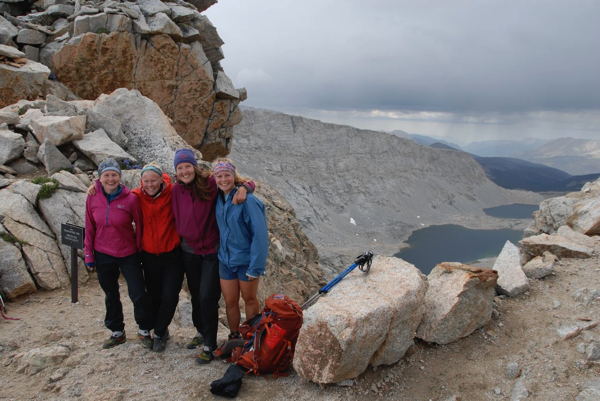 Me, Karin, Zoe and Annavitte on Forrester Pass. Photo by Pennie Rand 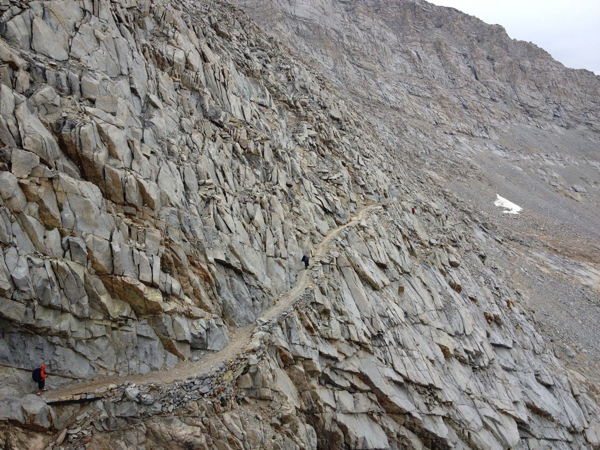 Just before the ominous storm clouds brought rain, I took the most magnificent picture of a pika, poised at the edge of the trail, peering at me like it had never seen a human before. 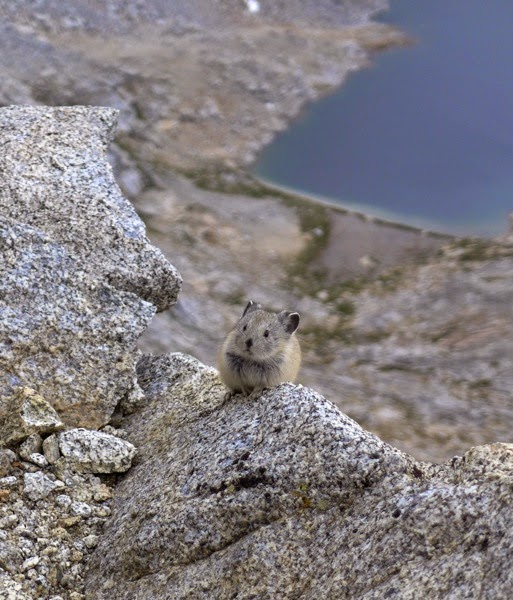 The rain started a couple of switchbacks down the pass, and it came down hard, soaking us and hitting us with hail. We could see and glimmer of sun in the distance, and with that glimmer rested our hope. The glimmer became a beam that shone on us as we traversed the plane beneath the steep slope of the pass. 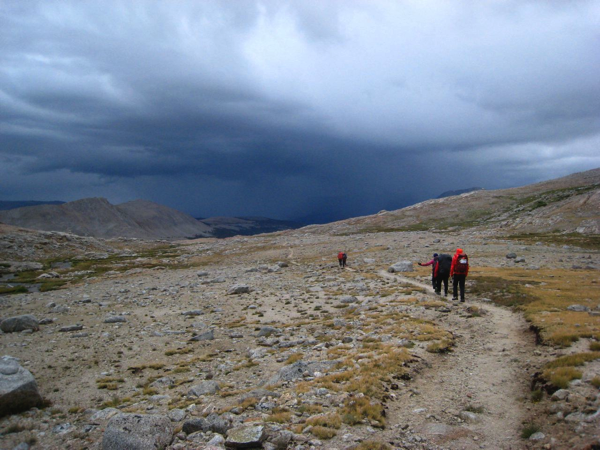 Into Mordor. Or something. Photo by Pennie Rand

Unfortunately, a dark, broiling storm cloud had been hidden behind the first hit of rain. In anticipation of lightning strikes, our group decided to hunker down behind some boulders and wait for the worst to pass. Personally I would have preferred to continue and get even lower down, as we weren’t at a high point in the first place. The Strazilchek family hunkered under a tent groundcloth, while the Rands were a few meters away under a tent fly. I disliked the anticipation, being cold and wet and waiting. Listening to the thunder was worse than being out in it. I started to sing, and my family joined me - “My Favorite Things”, “Rocky Racoon”, “Part of That World”, and some Stan Rogers.

The closest lightning strike was about 3 seconds away, on a ridge line well above us. When we finally decided to start hiking again, it was still raining and I was freezing cold. We hiked fast - racing, really - towards tree line and cover, but I couldn’t help but admire the spectacular vista before us: The dramatic light, with dark clouds ahead of us and blue sky behind. A mountain ridge that looked like it had been sculpted with a giant chisel. 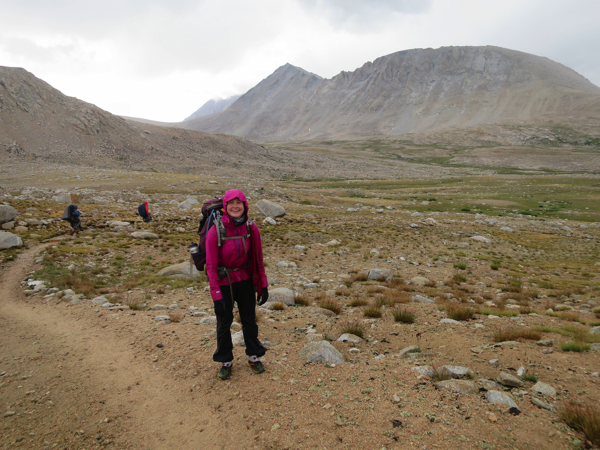 We reached the first patch of trees, and had to cross one more open stretch before ducking into the trees for good. Annavitte was terrified of crossing the open patch. We discussed it. Dad and I were vehemently opposed to waiting anymore; I knew I wouldn't stay warm unless we set up our tents and I got into my sleeping bag, and we needed to hike at least a few more miles. We also didn’t see crossing the open patch as so dangerous. The actual probability of being hit is so low, especially when you’re not really at a high point. But perceived risk is very subjective, and the consequences of actually being hit are catastrophic.

In the end, we went for it, and charged through the cold rain to Bullfrog Lake/Tyndall Creek, where there was a bear box (very handy). This was about 1 mile from where we actually had planned to stop, but more sheltered, so we decided to call it quits for the day.

Zoe and I found a stretch of ground where the water wasn’t pooling, and set up our tent as fast as we could, but everything still got wet. And the floor still wasn’t waterproof (we need a groundcloth!). I threw in all of my dry bags, and clambered in, dripping. I then went through a complex process of changing clothes and unpacking in an order which minimized wetness. When I finally made it onto the dry(ish) haven of my sleeping bag in (semi)dry clothes, I realized that I had to pee. I stripped of my down jacket and made a mad dash out into the rain, returning to the tent shivering. That was the last straw. Zoe and I crawled into our sleeping bags and snack on crackers and cream cheese we had cleverly pilfered from the lunch bear canister, and read until the rain stopped. 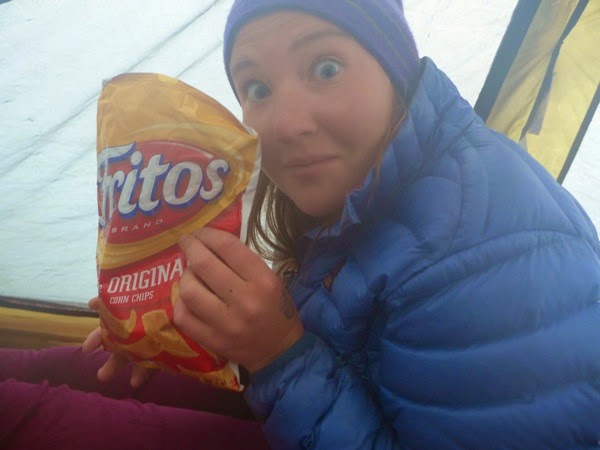 Zoe in the tent with Fritos.

That wasn’t until 5 pm, a full six hours after it had started! Matt, for some reason, stood outside for the whole time, jogging around the camp and chatting with the rest of us in tents. He said he wanted to save his dry change of clothes for when he knew would they stay dry. Personally I’m glad I got in the tent. 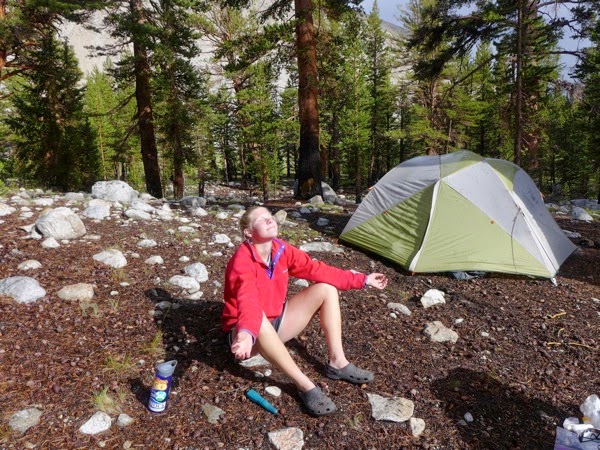 Blessedly, the sun came out, and we crept out of our dripping tents. Everyone spread their wet stuff around on the rocks, and we basked in the warm glow. There was thick, hot potato cheese broccoli soup for dinner, and all was well. We just hoped we could stay dry the next day. 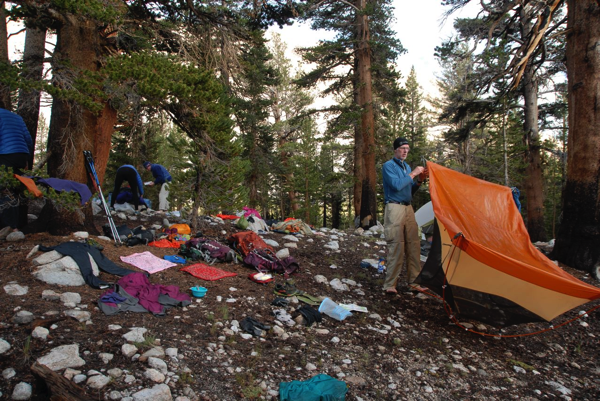 And the drying process begins. Photo by Pennie Rand 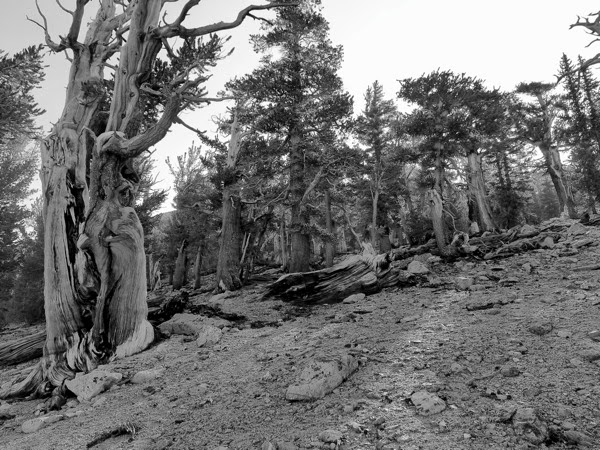 Foxtail pines in the morning light

The day dawned sunny, and the trail brought us up through a magnificent foxtail pine forest. Beams of light that I wasn’t able to properly render on cameras shone through the trees. We stopped before Bighorn Plateau, and spread out our things to dry before taking a side trip up Tawny Point. It was a 30 minute scramble, going hard without our heavy backpacks. Everyone but Mom and Zoe went. We could see Mt Witney from the top - the end was finally in site. 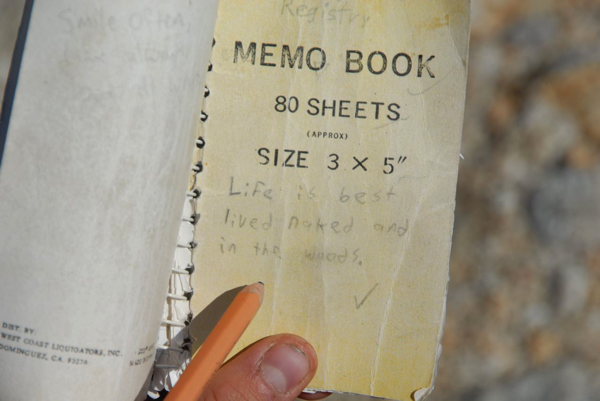 The log book on Tawny Point. Photo by Pennie Rand 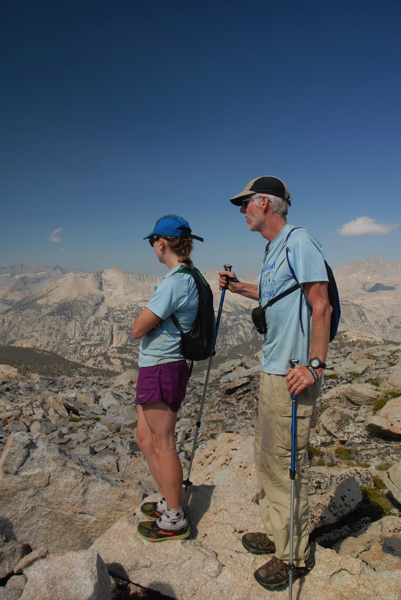 Me and Dad enjoy the top. Photo by Pennie Rand

Fat, fluffy clouds materialized in the short space of time we were on top, but they were ‘fair-weather cumulus’ as Dad said, and nothing to be worried about. I ran down from the top, skirting the rockiest face to find soft soil on a ridge that descended into the foxtail pines. We packed up quickly and traversed Bighorn Plateau, a large flat area among all of these mountains, with a circular lake in the middle. There were marmots frisking in the grass near the lake. 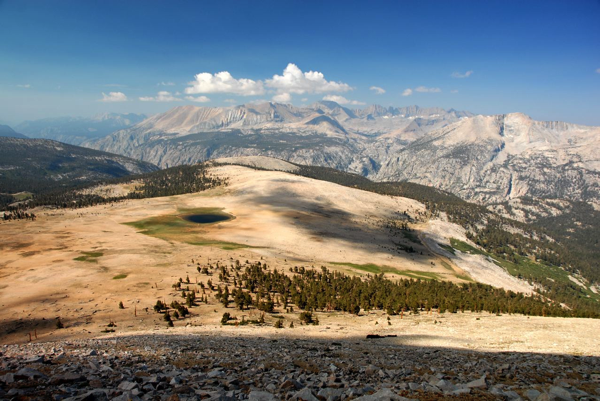 Looking down at Bighorn Plateau from Tawny Point. Photo by Pennie Rand 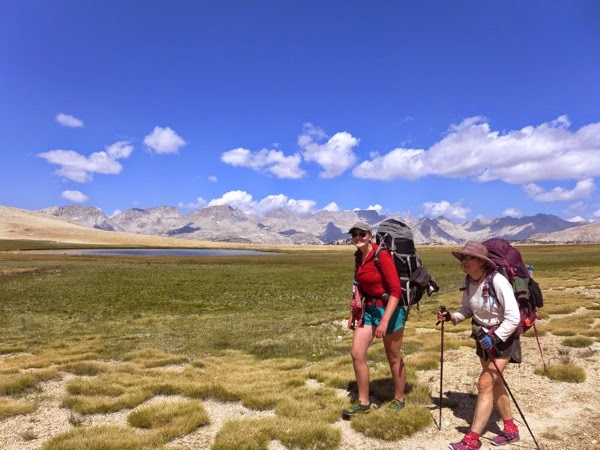 Us girls broke ahead and together we headed down to the intersection of the JMT with the High Sierra Trail at Wallace Creek. On the way, we met a rangerette named Chris. Apparently there would be a chance of thundershowers for the rest of the week. But she also said that in 8 years as a ranger, yesteday was the worst storm she had seen.

By the time our parents caught us at the crossing, it was high noon and we stopped to devour cream cheese, hummus and cheddar cheese with tortillas and chips (the luxuries of resupply!). My trail mix had gotten wet and sticky during the storm the day before due to some small perforations in the ziplock. 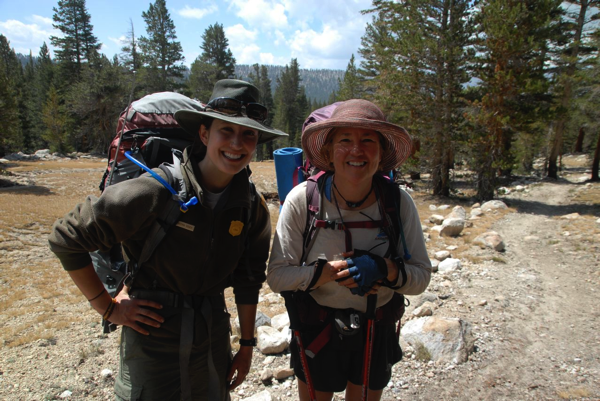 The Tyndall Creek Rangerette and Mom. Photo by Pennie Rand

Mom had also talked to the ranger. Apparently a 75-year-old man had gone missing on Mt Whitney, and was just found dead on the north side of Whitney. His wife had been waiting below at Whitney Portal.

After lunch, we climbed up and over to Crabtree Meadows before started the ultimate ascent towards Mt Whitney. Near the Crabtree Meadows ranger station we met a huge troop of boy scouts. They nearly walked past the (mythical, but real) box of Wag-bags at the junction, until we shouted that they needed to stop. The Wag-bag system, which is intended to keep the amount of poop on Mt Whitney to a minimum by making people carry refuse out in plastic bags, definitely isn’t without flaws.

A helicopter also landed near the station. Mom saw an older woman, who she reckoned was the deceased man’s wife, get in. I wonder what happened to him. The Tyndall Creek Ranger didn’t know the cause of death.

From Crabtree Meadow, the trail climbs steadily to Guitar Lake, tucked in a sort of valley below Mt Whitney. I was really hungry, and tried to eat the gross, vegan Rise protein bar (which I had selected because it had the most calories of all the bars). My pack was weighing me down like an anchor, but I knew we were close, so close to our goal - no stopping us now!

The sun was stilling shining directly above us, be we appeared to be right between two large thunderheads: one above Mt Whitney, and one behind us. I hoped no one was up on Whitney right then; it looked really dark. 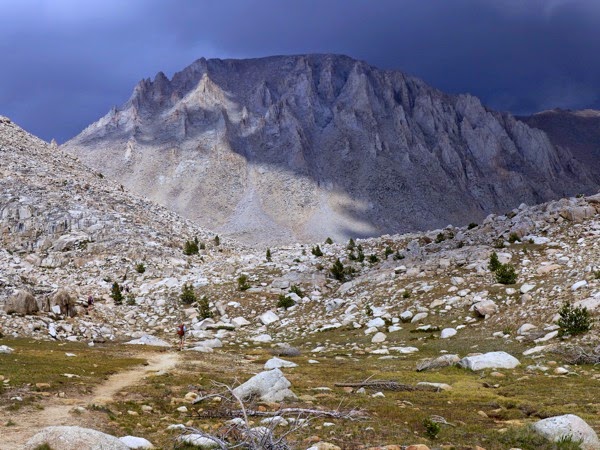 We arrived at Guitar Lake, the base camp for assaults on Whitney from the west. There were tons of people camped there compared to what we had seen on the rest of the trail. I found it rather ironic; remote places like Rae Lakes and Evolution Valley are much more beautiful in many ways, but much less crowded. But that’s the reality of mountains that are the biggest!

Luckily there was no shortage of sites, and we camped between some big boulders on a rise above the lake. Although the area around Guitar lake is mistreated due to its proximity to Whitney, it’s still pretty spectacular. We seemed to be on the cusp of a battle between dark and light, of thunderstorms and sun. The sun was winning at Guitar Lake. 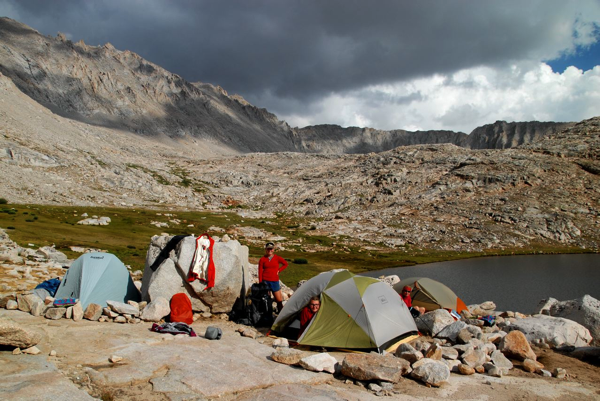 The camp at Guitar Lake. Photo by Pennie Rand

We swam in the lake. It felt magnificent, cool and clean and close to nature.

A rodent chewed a hole in my soggy trail mix bag. 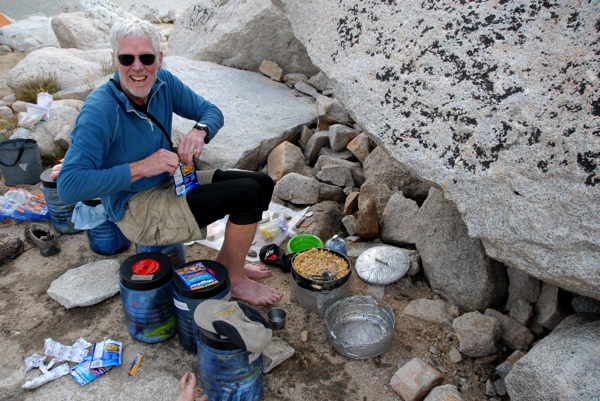 We had tuna pea wiggle with double cheese for dinner. It was great. Matt played the mandolin. We purified water. We steeled ourselves. We were ready for Whitney.