JMT Part 10: The end of all things

In the dawn light wafting over our little campsite, I realized it was August. “Rabbit, rabbit!” I exclaimed, a saying my family uses meaning good luck for the next month.

Our preparations started with being woken by Dad’s ludicrous bird sound (“Hing!”) at 5:15. It was colder than I was used to on the trail; probably because of our early start. 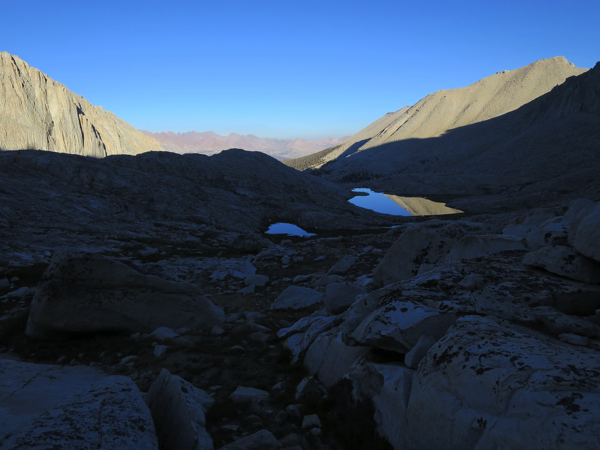 Looking back at Guitar Lake. Photo by Rick Strimbeck

We had set up our Wag-bags (waste disposal bags with powder to neultralize the odor) on a bear canister in a make-shift latrine. Originally members of the party were skeptical, but in the end it was deemed a great success. Dad, the inventor, was allowed to carry this particular bear canister (followed by loud rounds of the joke, “He’s carrying a load of s***!”)

We left camp at 6:50 am, first climbing gradually, then beginning to traverse the motherlode of switchbacks. They sure do a lot of trail building in California compared to Norway! Switchbacks with a low grade were a given on any hill. 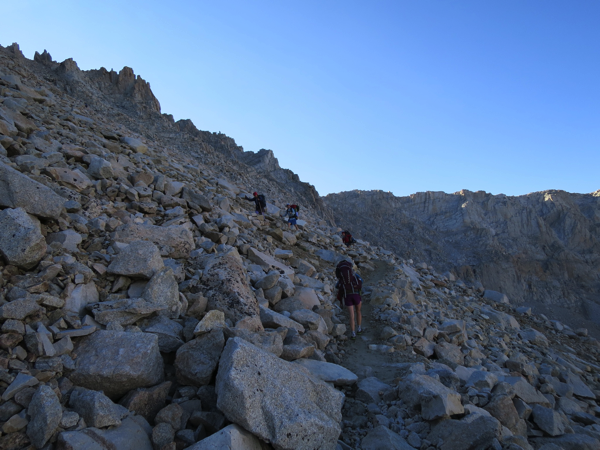 The switchbacks up to Trail Crest. Photo by Rick Strimbeck

I was feeling a little queasy as we headed up, and so I lagged behind. The weather was beautiful; not a cloud in sight. But we knew the clouds could come int quickly. We were in the shadow of the cool mountain, with a brightly light valley full of deep blue lakes spattered below us. Distant peaks glimmered through the haze.

The switchbacks eventually led to a junction, Trail Crest, where we left our packs. There were people pouring in from all three forks of the junction: one trail lead to the top, one to Guitar Lake where we came from, and one down to Trail Camp and Whitney Portal. It was the most populous stretch of the trail since Happy Isles, oh-so-many days ago. At the corner of the trail sat Worldest’s Fattest Marmot, glowering from under a rock, waiting to be fed. It literally looked like it had swallowed a bowling ball. 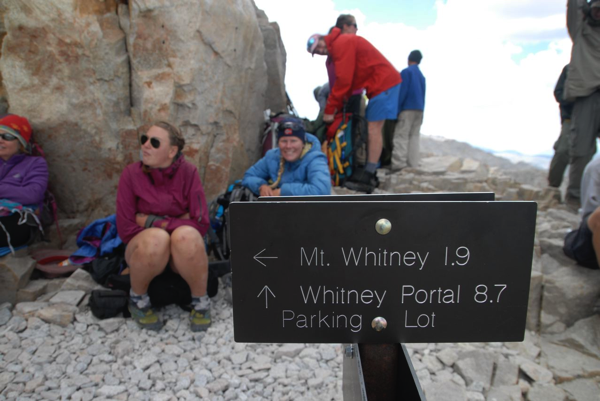 Once we left our packs and started the 2 mile ridge traverse to the top of the Continental USA, I started to feel better. Maybe I was actually acclimatized, and it was just my pack weighing me down all this time. I will never get used to carry big packs, I thought, not until I find one that fits me properly at least. 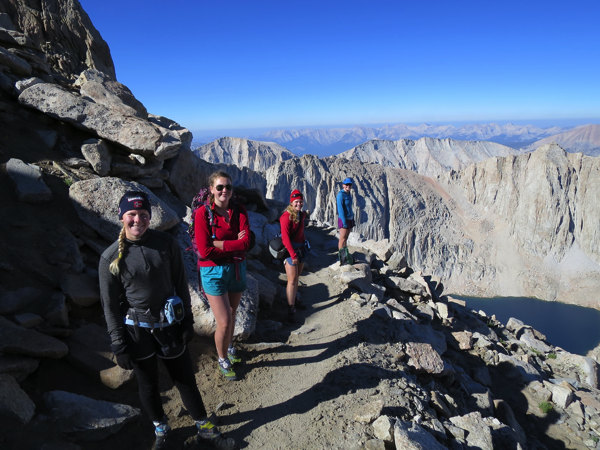 On the ridge: Karin, Zoe, Annavitte and me. Photo by Rick Strimbeck

I hiked with Annavitte and Karin, stopping frequently to take in the breathtaking rock formations and peering over the edges all the way down to Lone Pine and the hazy desert, thousands of feet below us.

There are several passages known as the ‘Windows’ along the ridge line to Mt Whitney, so-called because they are open on either said. Mom had heard and consequently obsessed about them. She asked every Northbound hiker for the last 4 days about them, and choose to believe the testimony of people who claimed they were ‘terrifying’ rather than others who said they were no big deal.

Quoth Mom crossing the broad, smooth path across the first Window, stopping to take in the view: “Is this a window?" 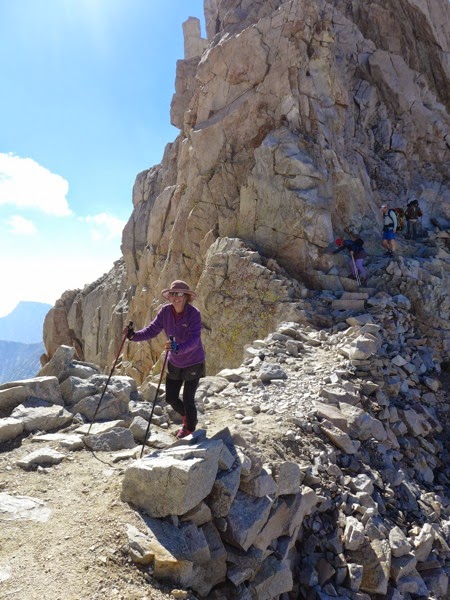 Mom, dubious of the non-terrifying opening: “Are you sure?” The windows were not a big deal after all.

As we came around the slope and saw the final massive, rocky, but not steep, slope to the top of Whitney, I saw Dad and Zoe far down the trail ahead of me and something came over me. I can catch them if I want to.

It felt great. We were a high altitude now, and I booked up the trail. I passed hikers who had come straight up from Whitney Portal, gasping for air like fish on land. I was immune; I was something more powerful. I didn’t need as much oxygen as everyone else. I drunk in the felling of being fast, enjoying the feeling of all of my muscles urging me forward.

I caught Dad and Zoe a few hundred meters before the top, and broke out in a run. I was the first of our group on top (not that it mattered!), and by passing Dad and Zoe I ruined their JMT experience for the last time. 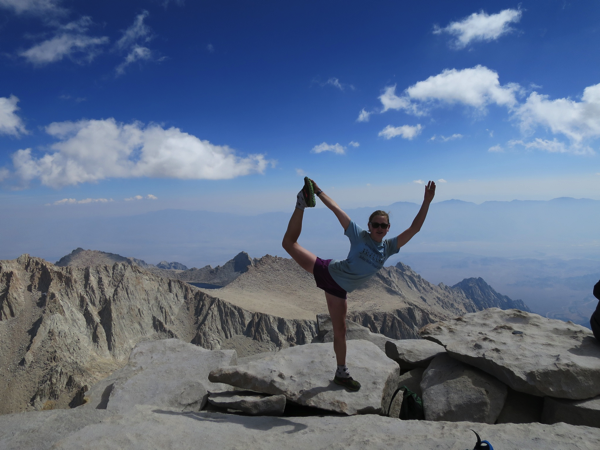 On the top, there was homemade beef jerky, hugs and many pictures. Matt made a little speech about how we would take the completion of the JMT with us as a strength. Mostly, I think the JMT was about putting one foot in front of the other. We each got a surveyors mark pin of Mt Whitney. We made it! Photo by Pennie Rand

Matt then held an impromptu mandolin concert to the general enjoyment of the 30-odd people on the summit. I took to summit yoga pics, and we headed down, not wishing to risk exposure to afternoon storms. 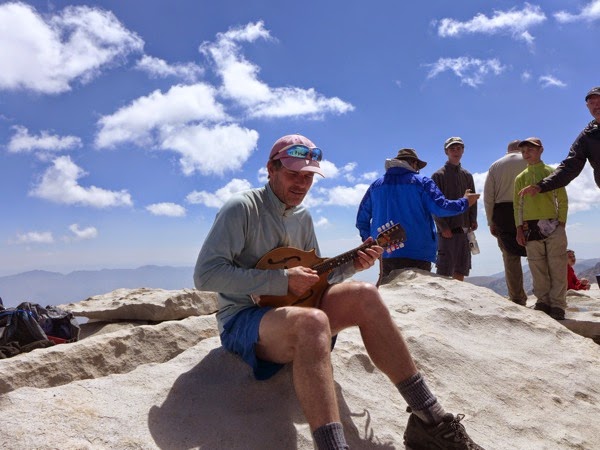 Dad and I decided to charge ahead; we had a mission in mind. It was called Mt Muir, a second 14-thousand foot peak along the ridge line back to where we had dropped our packs, and involved a scramble to the exposed summit (route description here). Mom, of course, was worried about gathering clouds, but Dad said they were fair weather cumulus. We had time yet.

We had trouble finding the actual gully up Mt Muir. At one point we started to scramble up the ridge just to get a vantage point, and in the end we found the steep talus slope that wound its way to the final, class 3 scramble to the summit. There was a trail broken into the loose slope. Once at the cliff to the summit, we went out to the far right, as in the red line below: But the move to get up to the shelf at the end of the red line turned out to be too long for me. Dad went up, and I first I thought I would just let him go to the top and wait it out. But then I started to think about the other possible route, and decided to go down and try it. 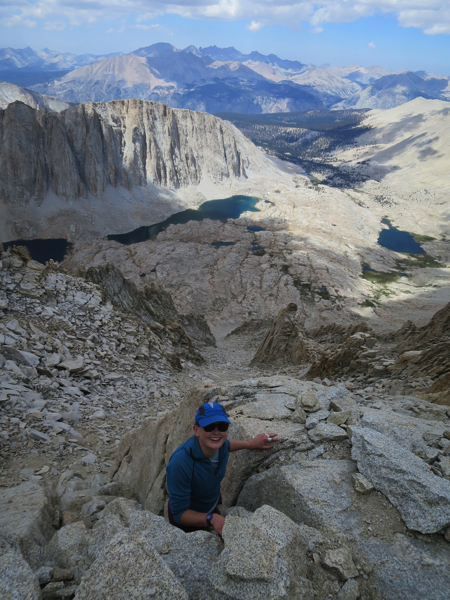 On the climb. Photo by Rick Strimbeck

The other (blue line) route was great, it basically consisted of a series of big steps up through the sheltered gully. After I met Dad on the ledge, we continued climbing, mostly easy, but with one ass-in-the-air traverse across a big boulder. Finally we squeezed into a crack between two rocks and we were just below the summit, with a thousand foot drop on every side of us except the way we had come. 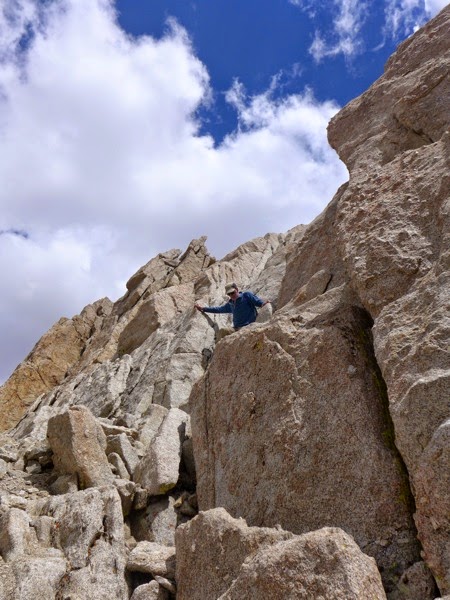 Dad on the downclimb

The final move to the top was easy, just pulling yourself up a sloped boulder covered in nubs. I knew I could do it, but the exposure was just to scary. So I sat just below the top, and let Dad go up and open the tiny summit register. We could see the trail below us, and I waved to the Rands passing below. We scrambled back down, satisfied to have done something a little extra. 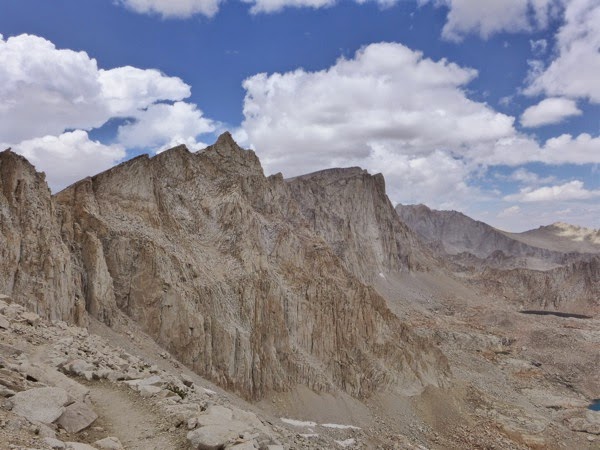 Mt Muir as seen from a distance - looking like the boss of the ridge even though the taller Mt Whitney is hulking behind it!

The rest of the day was a zillion switchbacks down a crazy steep slope to Trail camp. We got down and found a site just as it started raining. After the rain storm, I crawled out of my tent and watched stragglers coming down from the mountain. It would not have been cool to be out there during the thunderstorm. 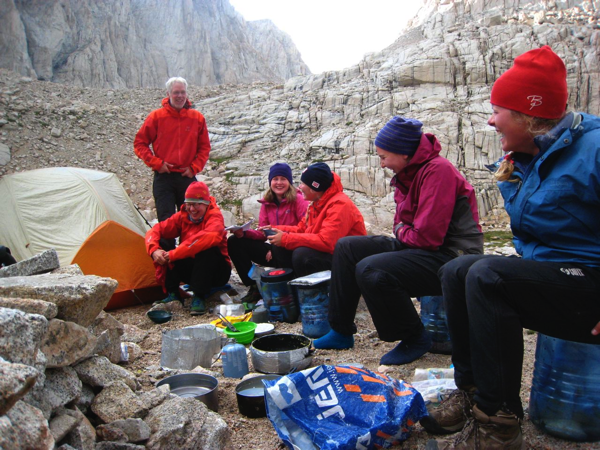 The last night at Trail Camp. Photo by Pennie Rand

Late in the evening, the final three stragglers came down. There was a couple, lightly dressed, who had been caught in the thunderstorm. The women was delirious from heat stroke or exhaustion or something, and could barely walk. She was being supported on one side by her husband and on the other by a boy scout who had helped them down. All respect to the boy scout for helping them, but I find it difficult not to be cynical. What did they expect, headed up a 14 000 foot mountain in t-shirts and shorts, starting late, with a little water and couple of Power Bars? Although the first death accident we heard about at Tyndall Creek had shocked me, after seeing people climbing the mountain, I’m surprised more people don’t die.

The last day would be a 6-mile hike downhill to Whitney Portal and civilization. Dad and I geared up for one final side trip: sunrise on Wotan’s Throne. We started climbing around the steep, rocky massive above Trail Camp 45 minutes before sunrise, our tiny headlamps illuminating a few meters ahead of us. The back of the Throne was steep, but not as steep as the front, and we picked our way up. The sunrise was dramatic, red and black and illuminating the face of Whitney behind us. 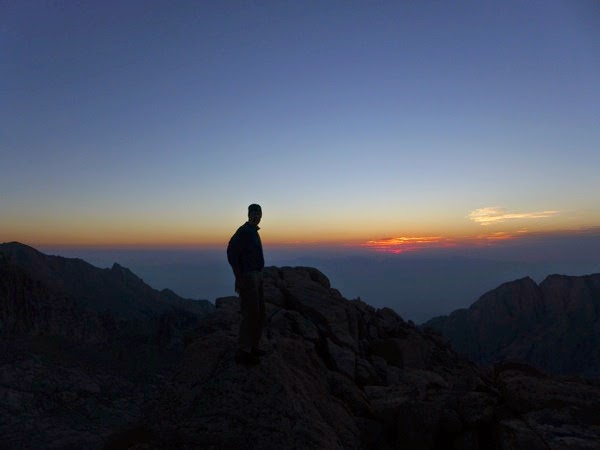 I chewed on a granola bar and looked down the valley where the trail would take us to our final destination. Hot showers waited, and endless food of our choosing. No more tortillas with peanut butter! There would be internet - I would final talk to Audun, after 16 days of silence. Then I turned back and gazed up at Whitney, and the sharp peak of Mt Muir. For a little while longer at least, it was just us and the mountains. Twenty-five sunrises and sunsets, and each more satisfying than the last. 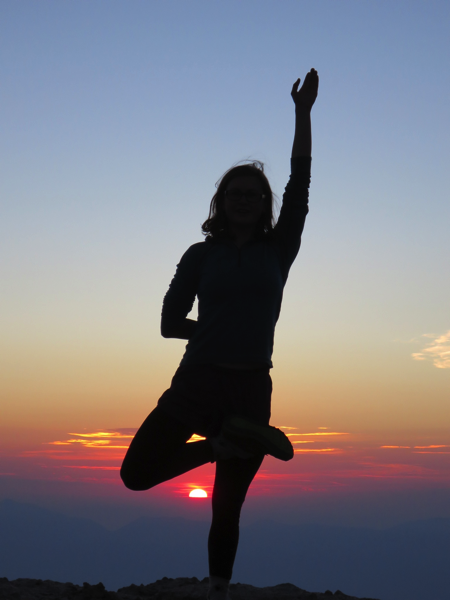 We turned and headed down the slope to Trail Camp. It was almost over. We just had to put one foot in front of the other. Again. And Again.