Audun and I got married - read part 1 of our honeymoon adventures in Norway here!

It was the gentle east wind that greeted us on the narrow ridge leading to Sjurvarden, a completely different world from the mountain we had been blown off three years ago. The steepness of the tractor road hadn't changed though, nor had spectacular view out to sea.

At the end of the narrow ridge, the trail divides, leading to two different peaks. We went up Sjurvarden first, and enjoyed a windy lunch at the top before riding back down to the saddle to take in Melen, a next door peak. Sheep grazed in the grassy terrain high on the mountain as we whizzed by. Plots of farmland were wedged into the flat area of land far below us, using every available piece of land.

The climb up to Melen was gruelling, and I push my bike up the long final section. The trail followed an old stone wall, now crumbled to a line in the earth where a wall used to be. The hill grew steeper, but the wall persisted. I kept thinking to myself, "I'm not going to ride any of this downhill, why should I bother to push my bike up it?"

I was pleasantly surprised to be able to ride most of the descent, although certain sections were too steep and rocky for me. Audun didn't have that problem.


The weather forecast was for sun on the coast the next day, so we drove north to Tustna. Audun was ready for a rest, while I was ready for a day running in the mountains. The idea of traversing the entire horseshoe-shaped ring of mountains that encircles Gullstein valley on Tustna has appealed to me since we first visited the island.

It was an absolutely gorgeous day, and I set out from Gullsteinvollen hut to run a couple of flat kilometers to the road before the first big climb to Knubben. My legs were feeling pretty flat, and I started to wonder if this wasn't such a good idea after all.

So I put on a podcast, put my head down and ground up the hill. As I rose above the trees, the views grew and my motivation grew with them. By the time I reached Knubben, I didn't need my headphones anymore. It was just me and the mountains.

After Knubben, I followed the trail along the ridge, with a steep drop on my left and a mellow grassy slope on my right. The trail was mostly runnable and I felt sky-high as I frolicked all alone in the mountains.

I crested Jørgenvågsalen, the second peak, and stopped on the top just long enough to write my name in the book before charging down the steep rocky descent.


I reached the saddle, from where I could easily have bailed back down to the hut. But nothing would stop me now, and I charged up towards Skarven. There were delicious blueberries among the rocks which I snacked on as I ascended. The path was steep and rocky, and required the occasional scramble.

I met two women hiking up towards Skarven, and as we chatted, a wispy cloud settled on the peak above us. I passed them and ascended towards the cloud. Miraculously, the cloud had settled on one side of the ridge, while the other side was completely in the clear. I followed the path on top of the ridge, on the knife edge between cloud and sun, for some ways. 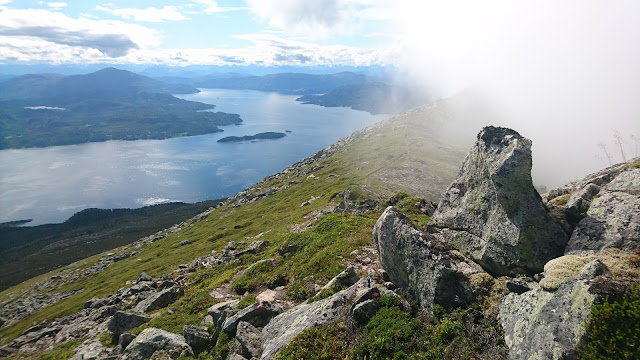 Then there was a long descent, rocky and first and then boggy and muddy, befor the final few kilometers on a tractor road to back to Gullsteinvollen hut. The traverse took me just over 4 hours {Strava here}. I was happy to relax for the rest of the day as Audun and I drove towards the Valdres region, the only bright spot in the otherwise dismal weather forecast for the weekend.

We pitch at tent near the road part way through the drive, and continued driving the next day through heavy rain. Just as predicted, the rain let up as we neared our destination. Based on some recommendations online, we decided to ride our bikes on Jomfruslettfjell.

We did a loop around Jomfruslettfjell with trails of variable enjoyment. The very best were open mountain paths, while the worst were overgrown, wet and virtually unridable. The final descent to the car brought the fun-o-meter back up again though.

For our last day, we rode up Spåtind, a 1400 meter peak. I was starting to feel pretty tired after 7 challenging days. I grew increasingly frustrated at not being able to climb what looks like simple trails on my bike. I threw myself into the uphill, my heart rate peaking at 195 as I desperately tried to stay on my bike for as long as possible. I couldn't keep that up for long though, and soon was pushing my bike up steep sections.

After the first long climb, the trail flattened out and provided fun riding in open terrain up to the mountain peak.


I felt nearly invincible on the descent, riding down rocky sections that I am sure I would have walked on some days. I know that my mind is what limits me when riding a mountain bike. Some days I am filled with an ineffable panic on difficult sections, whereas other days I am just able to relax, ride and see what happens. If I fall, I fall. It really shouldn't be that scary. I wish I knew what switches on the bad days, and I think I'm not alone.