Jotunheimen Rundt starts this evening (!), and I feel surprisingly calm. I'm still most nervous about the prospect of racing all night, but I have to believe it will be OK somehow. It’s taken me all six months of training, in addition to 4 years road biking, to finally admit to myself that I can do this. What follows is a recap of some of the training it took to get there. (Also see Gearing up, part 1)

The race starts on Friday, July 7, at 9:15 pm (Central European Time). You can follow my progress through different checkpoints on Eqtiming. 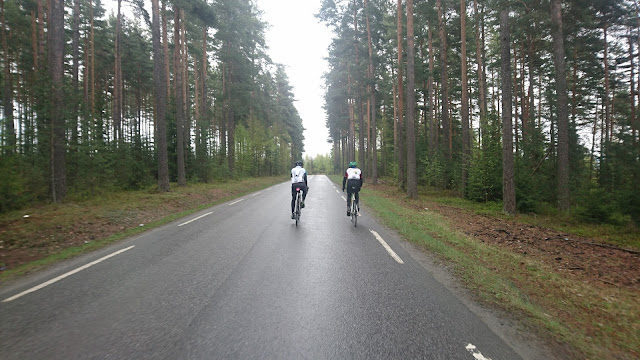 This was, mentally, the toughest ride I’ve done. I decided it would be good idea to go for a long ride the day after Holmenkollstafetten, the relay where I trashed my legs by running for three different teams. My legs were groaning from the moment I climbed on the saddle. It didn’t help that it was raining steadily for the first three hours of the ride. Despite wearing shoe covers, a rain jacket over a wool shirt and bike jersey, leg warmers, thick gloves and a buff, the cold slowly sunk into my bones. My weary legs couldn’t muster the energy to create more heat. After 30K, I was thinking about cutting my losses and quitting, and I told David and Audun as much.

“Just keep going a little further,” they said, “You can decide when we get to the crossroads in 10K.” There was no discussion of quitting at the crossroads. I just put my head down and continued pedalling.

I grew colder and more miserable as we continued. Although the rain stopped, my feet remained numb. Once we were in Vikersund, halfway around the lake we were circumnavigating, we stopped for lunch at a fast food place. Normally I object to longer breaks during training rides, but wearing thick gloves made it extra hard to keep eating, and I was desperate to stop and warm up my feet.

Hot chocolate, chicken nuggets and french fries provided me just enough motivation to continue on, although I was grumpy for most of the ride (sorry Audun and David!). I’m proud to have gotten this one done, although I couldn’t have done it alone. I’ve now invested in thicker, more waterproof shoe covers, and I’m crossing my fingers for less rain around Jotunheimen.

May 17th is Norway’s national holiday, and after a celebratory brunch, Audun, Vibeke, David and I took the boat across Oslo fjord and pedalled around Nesodden peninsula. We practiced drafting, and I had the exhilarating experience of leading the group on a steep downhill. With three rides on my wheel, I felt like I had to go extra fast, and both Audun and David noted my daring descent. I hope this means my bike handling skills are getting better - this is certainly important in a 20 hour race! 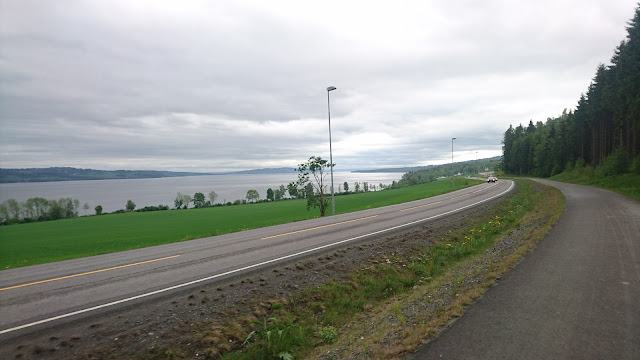 The same weekend as Birkebeinerløpet, I decided to ride my bike home to Oslo from Lillehammer, a ride of a approximately 200 km. “Riding 200 km the day after racing a hard half marathon sounds like a bad idea, Molly!” you might exclaim as you read this. And you would be right. I felt mentally drained, and met moderate headwinds early on. I was riding alone, and I felt demotivated by the wind and my tired legs. Ultimately the wind caused my pace to be much lower than I had hoped, and I would have easily been riding to 8 or 9 pm to get home. So I threw in the towel and jumped on a train from Eidsvoll, after riding 120 km solo. Although I was disappointed that I wasn’t able to persevere, I think this was the right decision.

Three weeks before the race, most of our team met and spend a weekend training on the Jotunheimen Rundt course. We stayed at Ingeborg’s cabin in Vang, along the first section of the course. The first day we set out to bike from Vang to Lærdal, where the race starts, and back.

We set a moderate pace and practiced our drafting formation, chatting and eating and generally enjoying ourselves. The mountains along the road were still partially covered in snow, and shone in the sunlight. If only we could have weather like this during the race, then everything would be easy!
I had taken two rest days earlier that week, and felt fresher than I had for a long time. Even after completing our 210 km right, I felt as though I could have continued and for the first time felt confident about completing Jotunheimen Rundt.

The second day we biked to Beitostølen and back, around 75 km, on a little of which was actually on the course. I felt tired when we started biking, but my legs woke up after an hour or so of riding. The only major mishap was when I blew a snot rocket so hard that I gave myself a raging nosebleed!

This final weekend was the perfect end to the bulk of my Jotunheimen Rundt training. Let's just hope I can find that happy place again tonight!