The month of May in Norway is full of days off, little gifts to those of us who like to enjoy the last of the winter’s snow during the long days of late spring. Two weeks ago was a four-day weekend because of Ascension Day, so Audun, Dad, Mom and I decided to ski in to Pyttbua hut and tag some peaks to round off the ski season. The ski in to Pyttbua is long and flat, so we opted for our skinny mountain skis rather than our heavy ski mountaineering gear.

Since we had plans earlier in the day, we didn't get to the trailhead until 4pm. We assumed that, this late in the season, the road up to the summer parking area would be open and it would only be 8 kilometers to the hut. But the road was closed far below the summer parking. As we got our gear ready, we still hadn't fully realized how far it was to the hut. Unknowing and blissful, we set off up the dirt road.

I put on my skis when I saw the long first stretch of snow covering the road, hoping this would be the end of the bare ground. It wasn’t, and neither was the next one. Or the next. Or the one after that. There was snow, but only in stretches of a few hundred meters at a time. It continued like that until we finally reached the summer parking area. I looked at my watch. We had already gone 8 kilometers! The ski in was shaping up to be at least twice as far as we thought, but hopefully we would be able to ski more as the trail climbed. 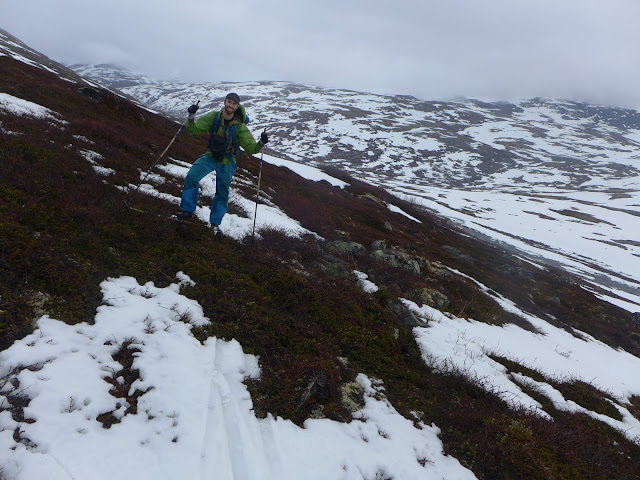 On the (literal) bright side, there was plenty of daylight, sunset being at 11pm these days. It was suppertime thought, and realizing we still had hours to go, I stopped and ate a bunch of snacks. This turned out to be a good call, since the skiing only grew more frustrating. On a trail now rather than the dirt road, we spent the next 4 hours bushwhacking through scrubby trees. We tried to cobble together continuous snow routes on the maze of slushy spring snow that patterned the ground. In some places, the trail was completely exposed and we walked, carrying our skis. I sometimes tried to walk through short stretches of snow. I was rewarded by post-holing up to my thigh, sometimes plunging my foot into an icy bog. 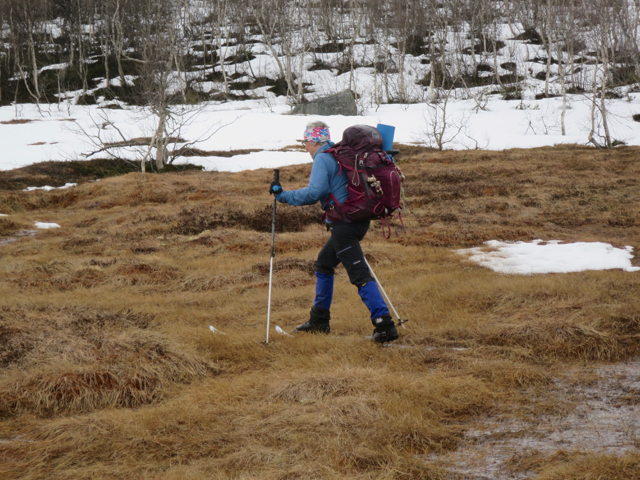 As the day drew on to evening and the ordeal continued, we couldn’t be bother to take off our skis anymore. Sometimes the trail would cross a bog, and if I didn’t see any rocks, I would just march right across, skis and all. We finally reached Pyttbua hut at 10:30pm, exhausted and swearing that we would never do that again. {Strava}

After a leisurely morning, Audun, Dad and I headed out to ski up Høgtunga, a 1900-meter peak behind the hut. It was sunny, but there were low-hanging clouds crowning the mountaintops. The clouds above us evolved in mesmerizing patterns as they rushed passed in a brisk wind. 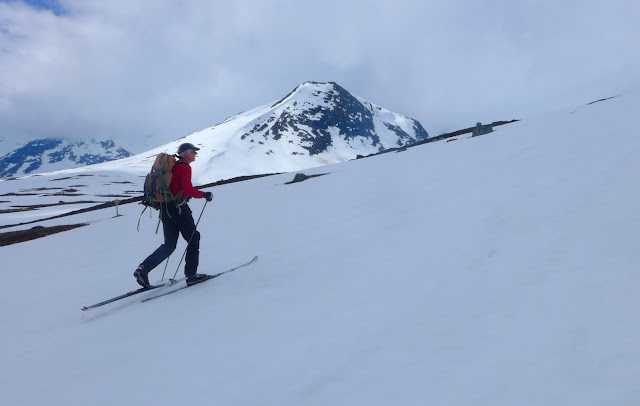 There was much more snow now that we were a little higher up and out of the trees. It was the thick, slushy variety, saturated with water. Clearly there hadn’t been a frost in the nights proceeding. The visibility shifted constantly: sometimes clouds would encircle us in the thick fog, but only a few minutes later the clouds would clear and we could see the valley below. It was a little nerve-wracking to loose visibility so abruptly, especially when climbing steeper sections.

The top of Høgtunga was almost above the clouds, permitting us little window-like views as we sat in the shelter of summit cairn, snacking. 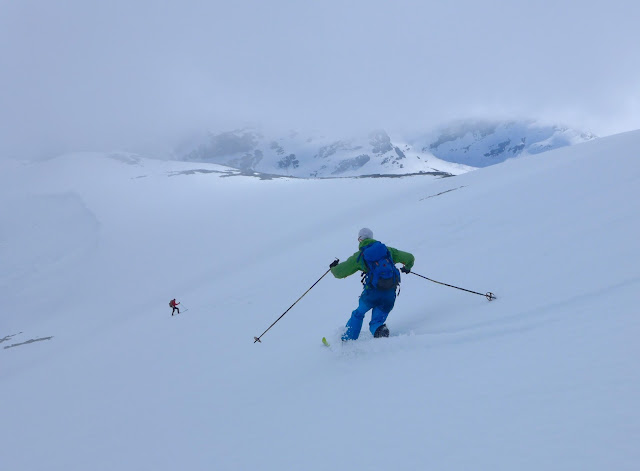 The descent, which would have been easy on our larger ski mountaineering equipment, proved challenging on our skinny mountain skis. It was back to my roots as a telemark skier. No plastic boots or fancy bindings, you have to drive the ski with muscle power alone. I like to hope I still haven’t forgotten it.

The sun came out as we descended back to the hut, and the temperatures became absolutely summery. I spent the rest of the afternoon sunbathing in front of the hut, reading my book and enjoying having no where to go.{Strava} 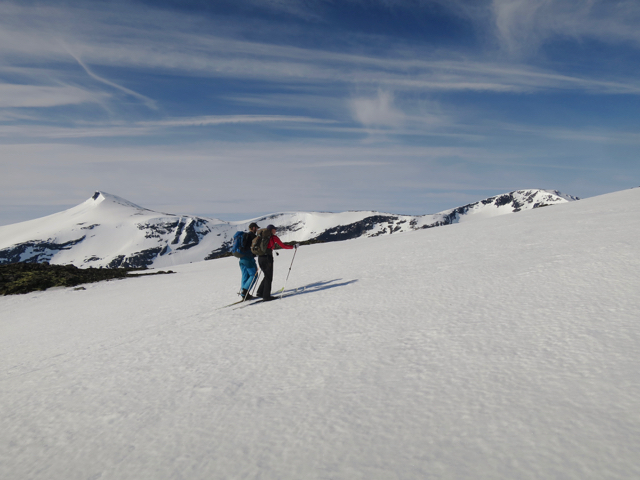 The next morning, the cloud cover had retracted to high above the mountain tops and it was time for a bigger adventure. Audun, Dad and I had our sights set on the Horseshoe Traverse, a natural line that passes over three mountaintops: Pyttegga, Høgstolen and Karitind. 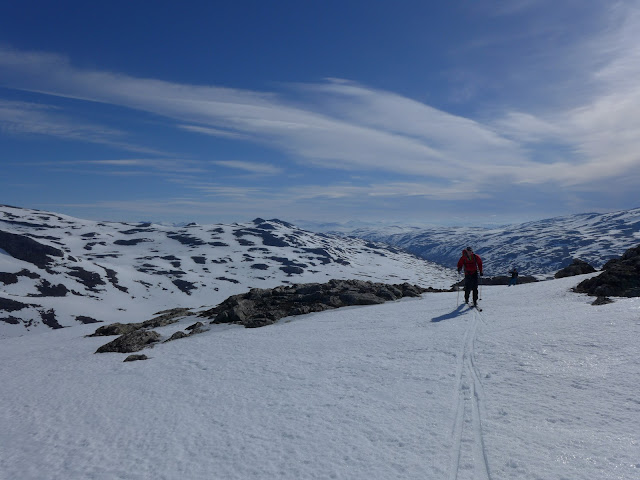 The climb up to Pyttegga was straightforward, following a mellow ridge line that afforded views of the rest of the traverse to come. There was a rocky stretch that forced us to take our skis off once, but it was nothing like the ordeal of coming in to the hut. 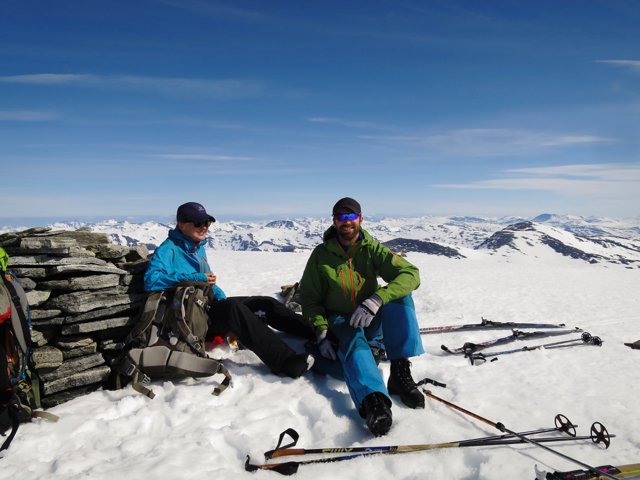 Audun and I had anticipated navigational difficulties from the top of Pyttegga. We had done this traverse once before, on foot, and there had been fog on top of the mountain which forced us to take a very steep line down from the top. With good visibility and snow, this link up grew more easy. We avoid clambering down the steep, south-facing ridge and instead descended on skis in a south-facing bowl before traversing out to the saddle between Pyttegga and Høgstolen. 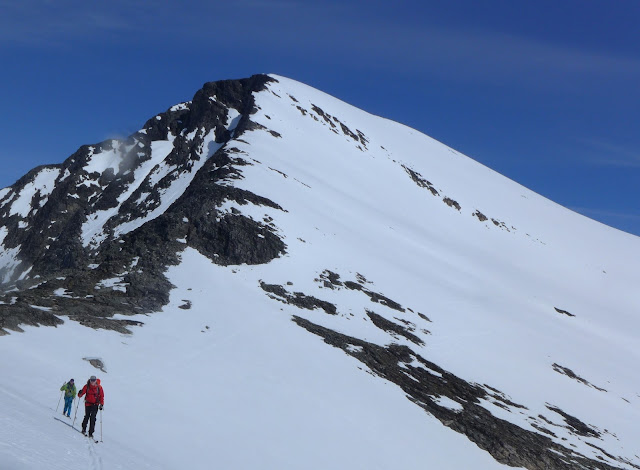 The climb to Høgstolen followed a steep ridge that was narrow and rocky on once side and corniced on the other. Having noted the size of the cornice from the previous summit, we opted to strap our skis to our packs and clamber up the rocks. As our poles clacked against the rocks, Audun and I cracked jokes about dry-tooling (ice climbing on rock). 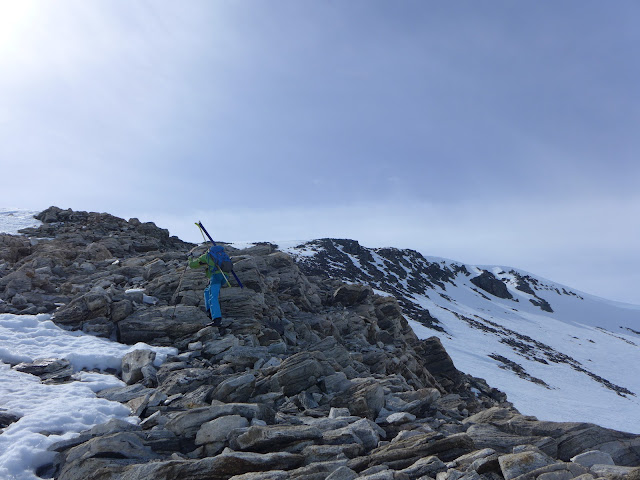 The wind was strong on top of Høgstolen, and we dug a bench on the lee side of the cairn to have lunch. After lunch, we picked our way down the ridge between Høgstolen and Karitind. There were more bands of rocks and cornices to be wary of, but we managed to get away with only taking our skis off once. 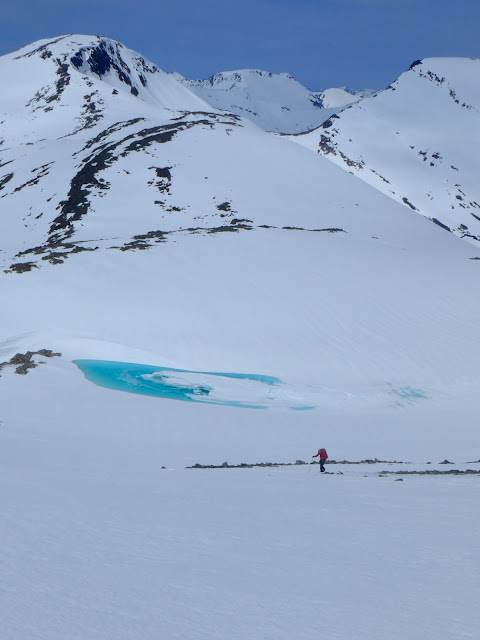 The final ascent to Karitind was steep, but we were rewarded with more spectacular views. I love spending days high on mountaintops. The descent to Pyttbua was challenging on skinny skis, but we got the hang of it, and were soon all linking turns down the slushy slops. 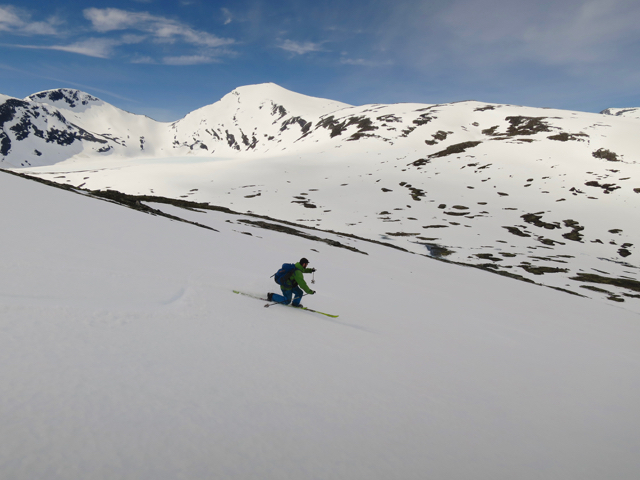 At the bottom of the descent, we could look back at the circular ridge above us, knowing we had covered all of that ground in one day. {Strava}

Although I was tired, I felt guilty about sitting inside while the sun still shone. The problem with summer in Norway is that if you want to use all the available light you would never get to sleep!
The next day we steeled ourselves for the ski out. Having thought through our route a little more, we opted for a high route with more continuous skiing and considerably less bushwacking than the ski in. {Strava} 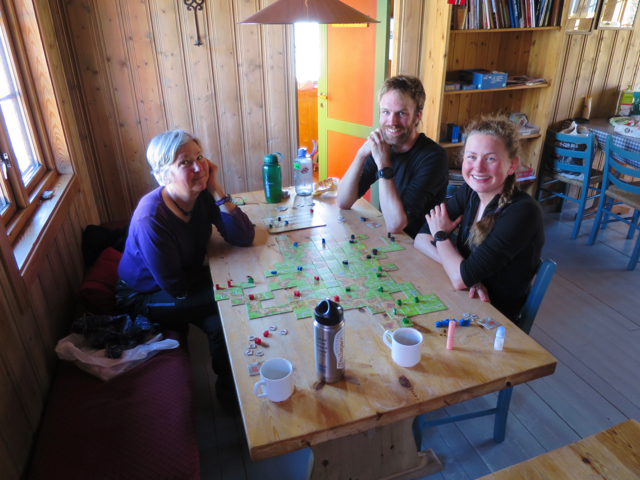 I think this trip marks the end of my ski season this year. Soon the snow will melt and it will be time for adventures on foot in the high country!