Many people go from couch to 5K; I found a more roundabout way to get to the 5K. My first race was Oslo Marathon in 2010, and I spent years shying away from shorter distances, telling myself than long distances were my thing, until I decided to try my hand at a 10K in 2014. Since then, I’ve realized the advantage developing speed over shorter distances gives me in long trail races, and whittled down my 10K PR considerably. I’ve even come to enjoy the pure, hard effort of training and racing 10Ks. I began to wonder what it would be like to run a 5K. After a particularly exhilarating track workout I decided to go for it, and signed up for Sentrumsløpet 5K two days before the race.

My goals going into the race were (a) race hard and see what I could do and (b) break 21 minutes, with the subgoal of getting as close to 20 minutes as a possibly could. 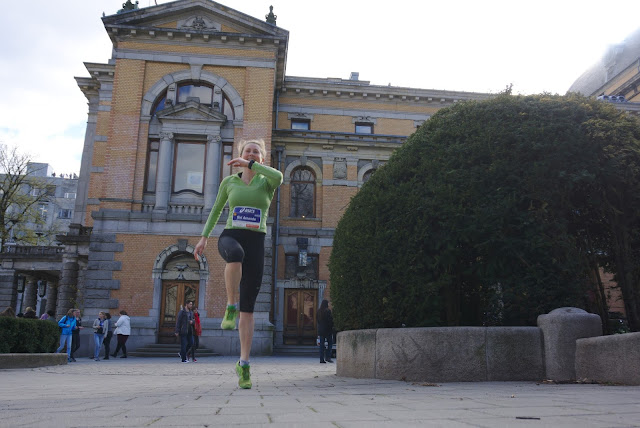 Warming up for the Sentrumsløpet 5K. Photo by Audun

I ran to the start of the race to get a good, long warm-up. It was a sunny, but chilly, day. Unfortunately I spent a little too long milling around before the start, and probably wasn’t quite warm enough by the time I went to line up for the start.

I moved forward through the crowd, trying to look for runners who looked about as fast as me. I ended up only a dozen or so rows of people from the front of the field. Most of the people around me were wearing lycra, racing flats and GPS watches, with the notable exception of ten women in matching green t-shirts, sporting backpacks and hiking boots. I bounced up and down on my toes, debating whether I should politely let them know that this was a race, and probably if they were going to walk they should start further back in the field. But they all looked so excited, and it seemed unnecessary to bother them.

I regretted my decision as soon as the gun went off. As a sea of a thousand runners moving inexorably forward, I jostled to get into position to get around the women in green. The start was total chaos as I propelled myself across the start line, accelerating as I dodged slow-moving, mispositioned race-walkers. 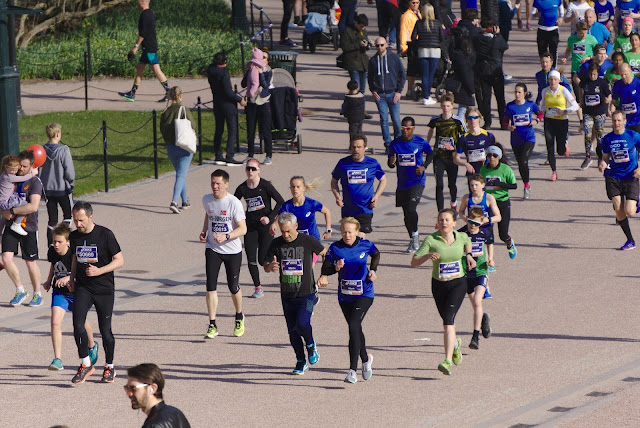 5K runners on the hill up to the royal palace. Photo by Audun.
The beginning of the course is uphill to the royal palace, and I sprinted along, worried I had lost time weaving around people at the beginning. My lungs stung with effort by the time I reached the top of the hill, but to my delight I was rid of the race-walkers. Now I could concentrate on finding my legs, which somehow already felt fatigued. Never did 4 kilometers remaining seem so far. Kilometer 1: 4:11

I settled into a steady rhythm as the course flattened and made a few turns before heading downhill. I wanted to relax and regain my breath down the hill, but I had just passed another runner and I didn’t want to let up. I couldn’t afford to take it easy, so I push the downhill, using it to gain even more speed. Kilometer 2: 3:52 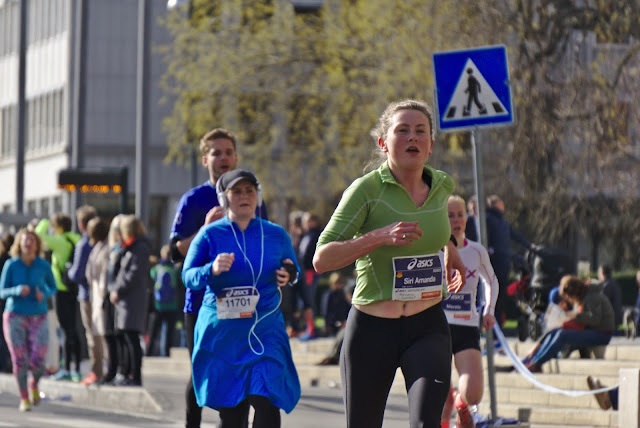 It was then that the leaders of the 5K race started to hit the tail end of the 10K that had started earlier in the day. I felt like superwoman as I bounded passed a few of them. As I ran past the city hall, I saw Audun cheering for me, but I was in too much pain to even try to smile. My singular focus was to keep up the effort for the remaining kilometers. Kilometer 3: 4:06

As the course wound around the wharf, the congestion of 10K runners grew and I was forced to the edge of the course, making wide turns, to pass them. I scanned the street ahead of me for other 5K runners, but I was on my own.  I began to cough a little, my throat constricting in the asthma-like way that I sometimes experience during hard efforts. Kilometer 4: 4:15 /km

The final uphill on Kirkegata seemed to take forever, and I lagged mentally, unwilling rather than unable to push myself harder. I nearly had to shout at a group of 10K walkers who filled up the street. It was lucky they noticed me, since I don’t actually think I had the breath to shout. I turned the corner for the final stretch to the finish, and mustered my energy to give it my all for the last hundred meters to the finish. I crossed the finish line, so glad it was finally over. Kilometer 5: 4:10 /km 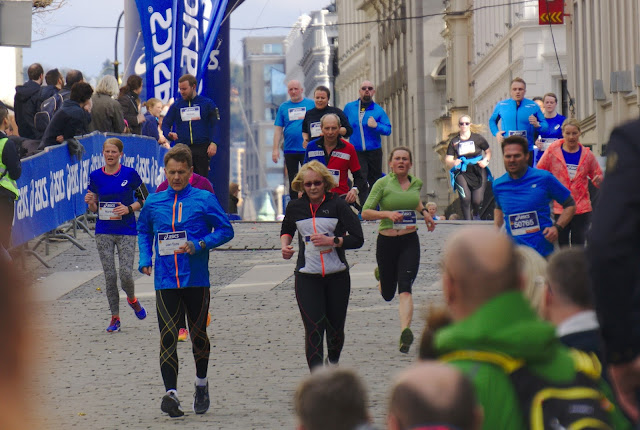 Angry sprint to the finish. Photo by Audun.

I finished in 20:49, a decent if not surprising time given my current fitness. Racing the 5K was incredibly intense, and I found it pretty stressful that I had to push so hard the whole time to keep the pace. I also wish the race organizers could have found a way to avoid the sending the 5K runners out on the tail end of the 10K race. I spent so much time dodging other people that I never really found my flow. Still, it was an interesting step out of my comfort zone.