Among skiers, Japan as a ski destination is kind of a holy grail. People gush about how much it snows, how there’s powder all the time. It’s the most amazing place they’ve skied, everyone says. I went to Hokkaido for the last two weeks of January, pursuing the myth of Japanuary. Having high expectations is a dangerous game, and although I had a great time, I want to be honest.

Skiing in Japan, like all places, has its ups and downs. There’s powder, but there’s also competition for it. There’s amazing tree skiing, but the runs are short because the resorts don’t have big vertical fall. 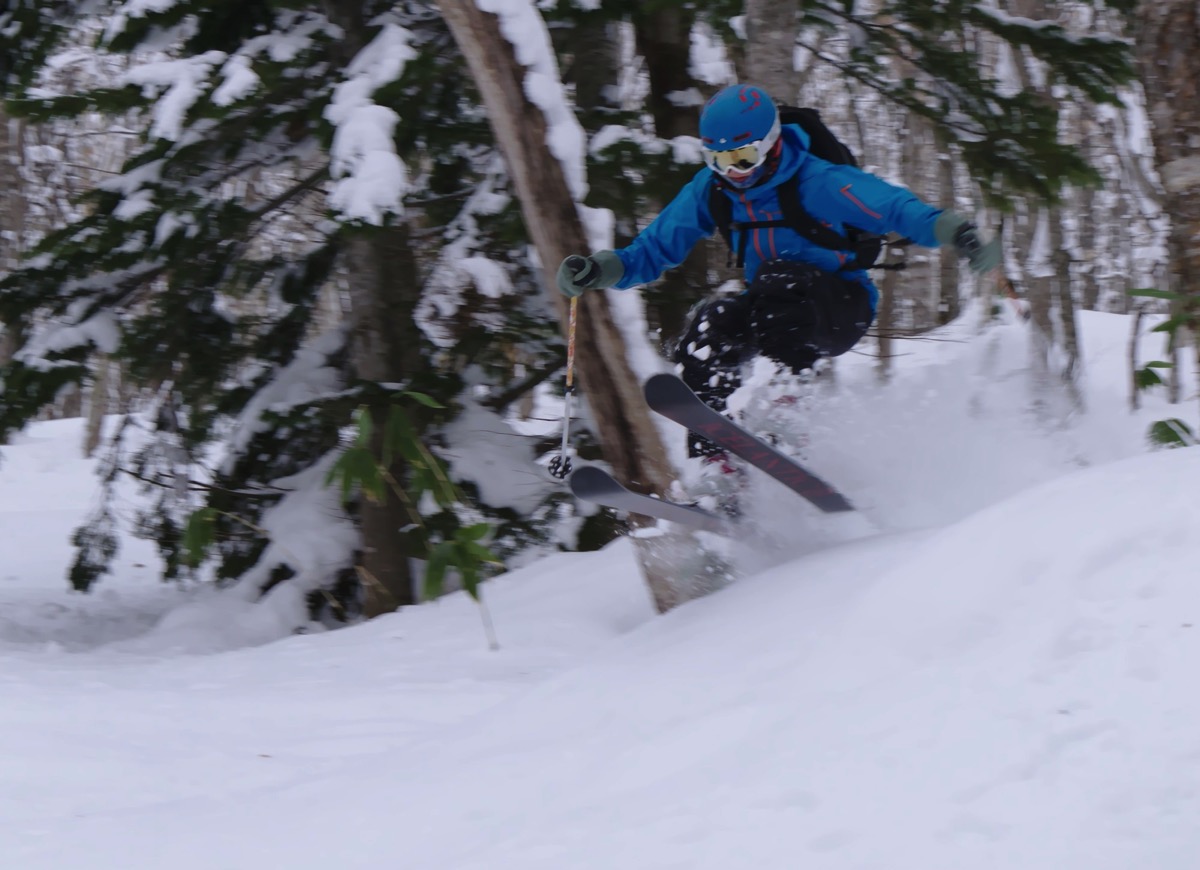 Look, I jumped! Both my skis were in the air!

The terrain was insanely fun, if you are willing to punch a couple of trees. Most of skiing in Japan was mastering the art of squeezing between increasingly tight trees to find an original line. Audun had a little too close encounter with a tree in Rutsusu on the first day, and managed to break his wrist. We spent 4 hours in the emergency room in Kutchan, where they get so many tourists that they actually had translators on hand. 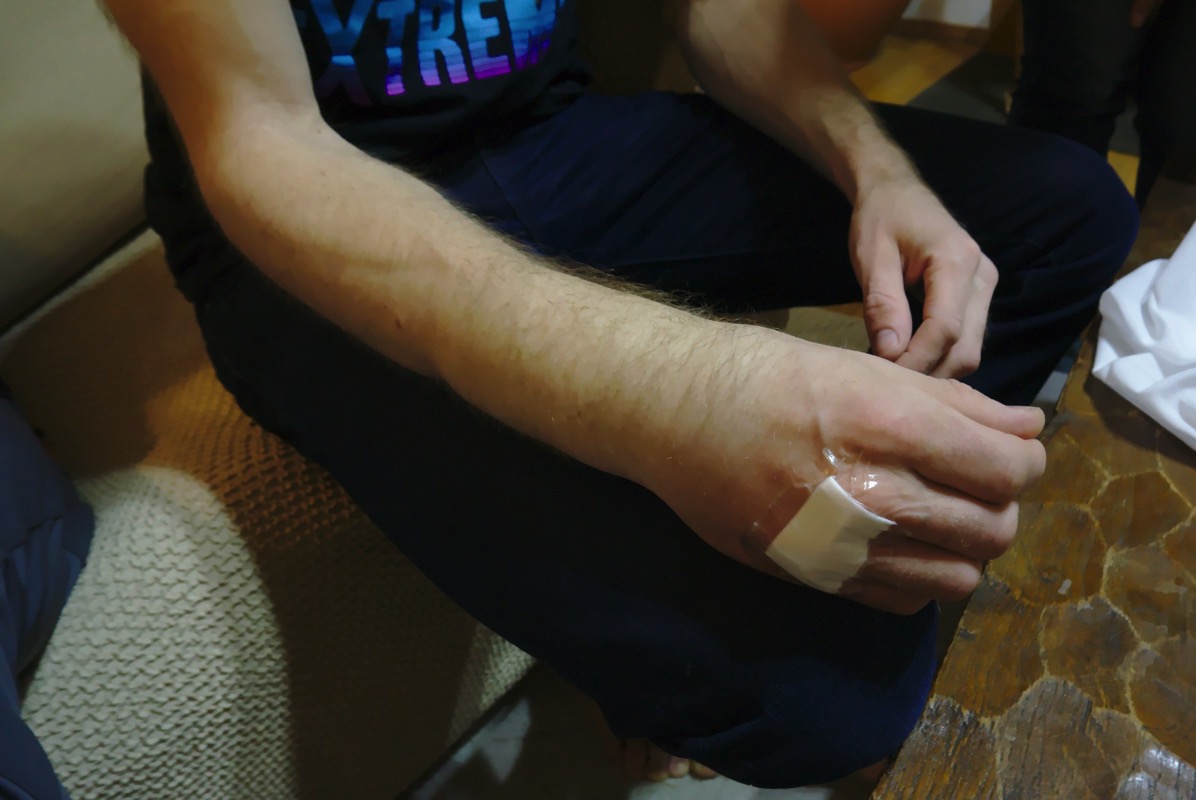 With Audun resting up his arm, I explored the enormous Niseko resort with friends Vibeke, David, Hilde, Solenne and Lars. In Niseko, almost everyone is foreign. Most of the people working in shops and restaurants are Australian. It is, in fact, the least Japanese place I have been in Japan. There’s also an enormous amount of competition for the powder, especially anything that’s remotely life accessible. 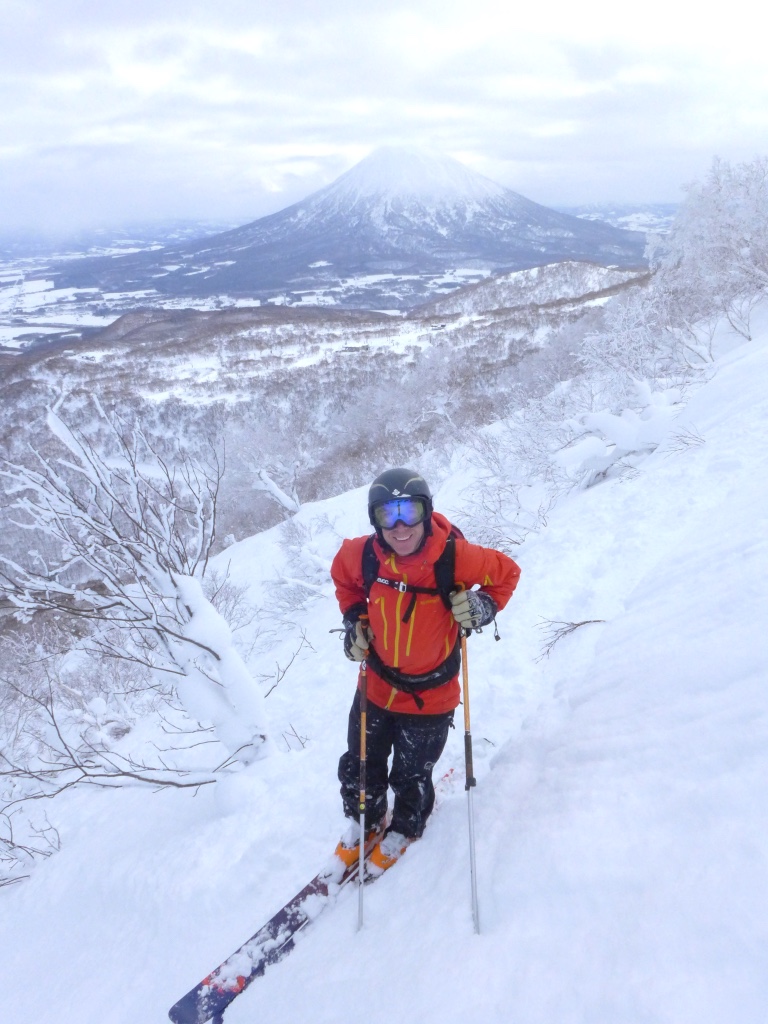 David digs the view of Mt Yotei from the backcountry of the Niseko resort.

If you’re willing to earn at least some of your turns, it's much easier to find untracked snow. With the help of Hilde, who had skied in the area before, we managed to find the promised powder and enjoyed great turns. The Niseko resorts cover about half of a round, volcanic mountain. If you climb up to the top of the mountain and ski down the backside, you can be in for a treat. 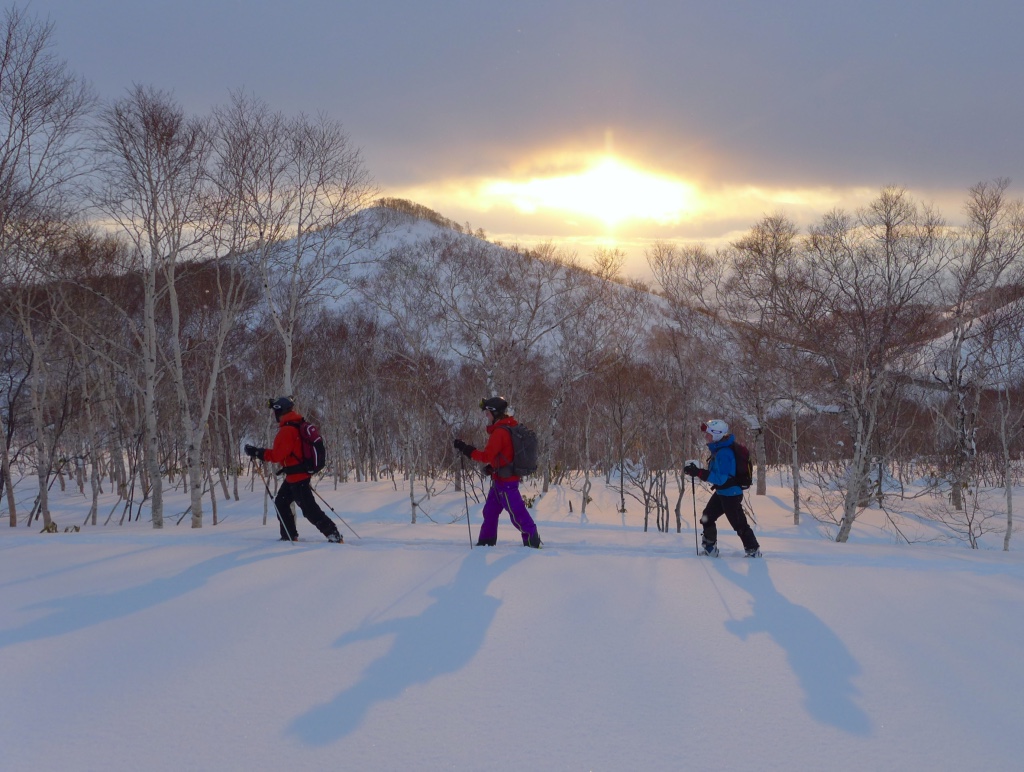 Skinning back to Niseko from Goshiki onsen

It only took a couple of days for Audun to decide that skiing with one arm in a sling was a good idea. Honestly, if you are not skiing, there’s not a ton to do in Niseko other than visit onsen, hot springs. (We spent some time in onsen as well, unfortunately you’re not allowed to take photos). 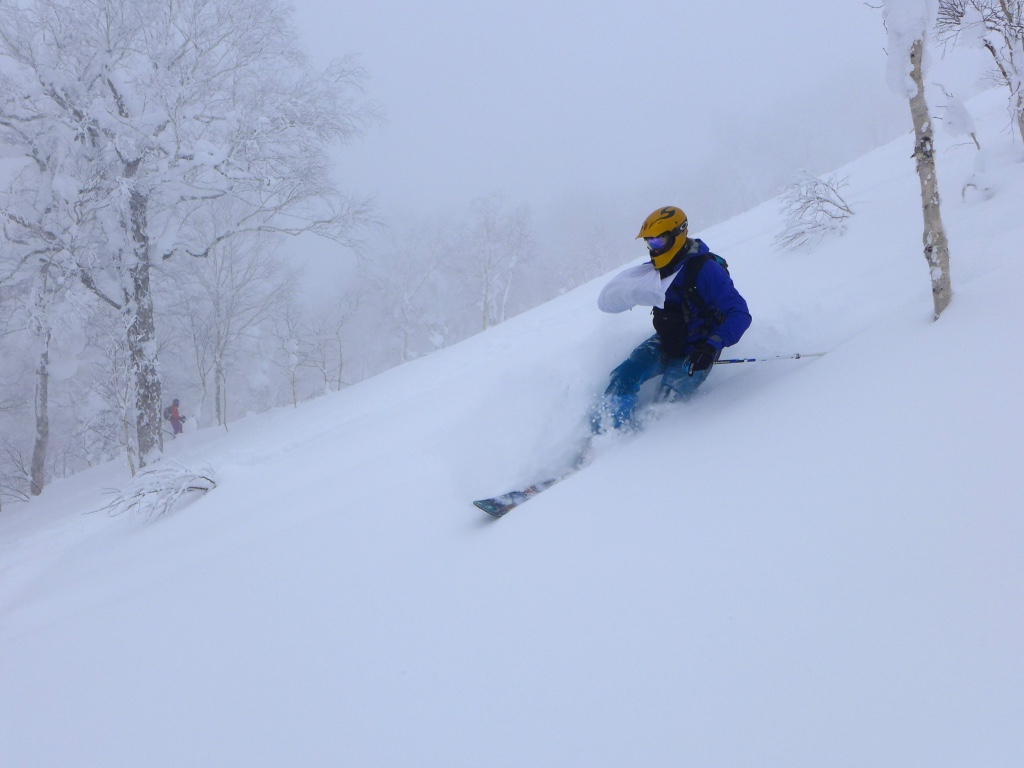 The one-armed telemarker in action

The snowfall seems to vary locally in Hokkaido, and we observed that a ski area called Kiroro was getting a lot more snow than Niseko. It turned out to be more than worth the 1 hour drive to ski all day in thickly falling snow. The world was our playground in Kiroro. That is, after we had stood in line to get the required backcountry passes. There are lots of rules about going off piste in Japan, and they vary from resort to resort. Coming from Norway, where the very idea of restricting an area from skiers is laughable, it was sometimes hard to be patient.

Good things come to those who wait! 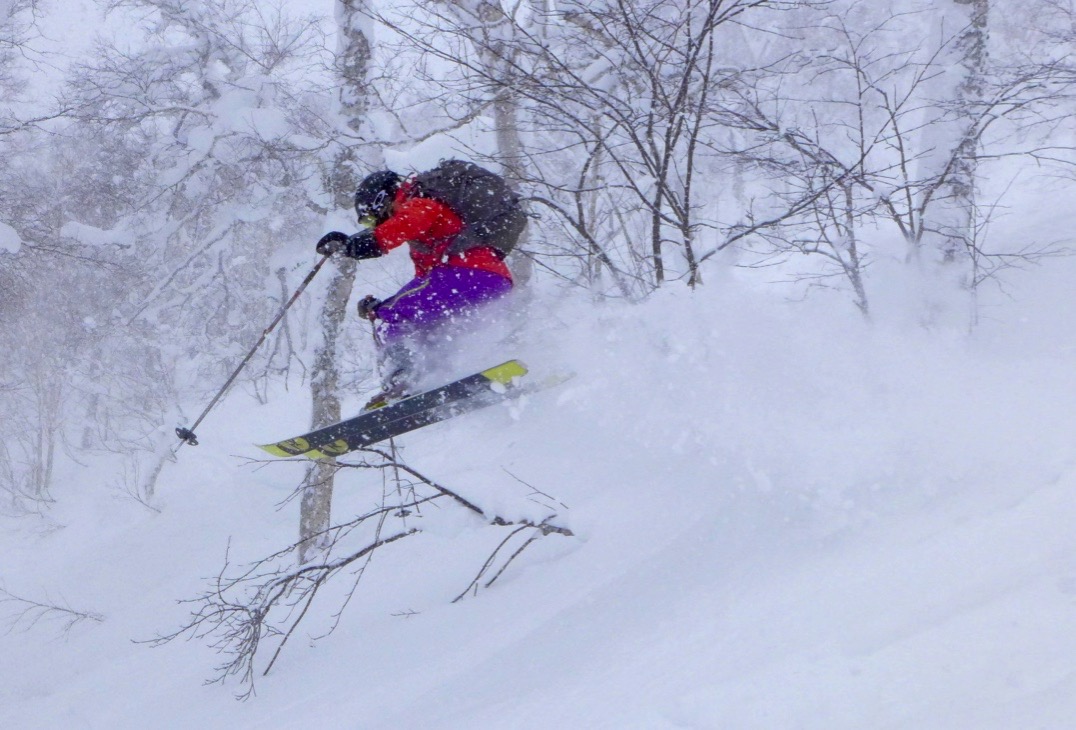 Hilde blasts through the pow in the thickly falling snow in Kiroro.

Another problem I encountered was the ‘everything was better last season’ mentality. According to most of the people we talked to, this was a bad snow year in Japan. When we said things like, “Well, there’s still a lot of powder compared to Norway!”, people would shrug it off and continue to insist that this was the worst snow year ever, and that everything was terrible. I guess this is true of most places - you remember the epic days and forget mediocre ones. 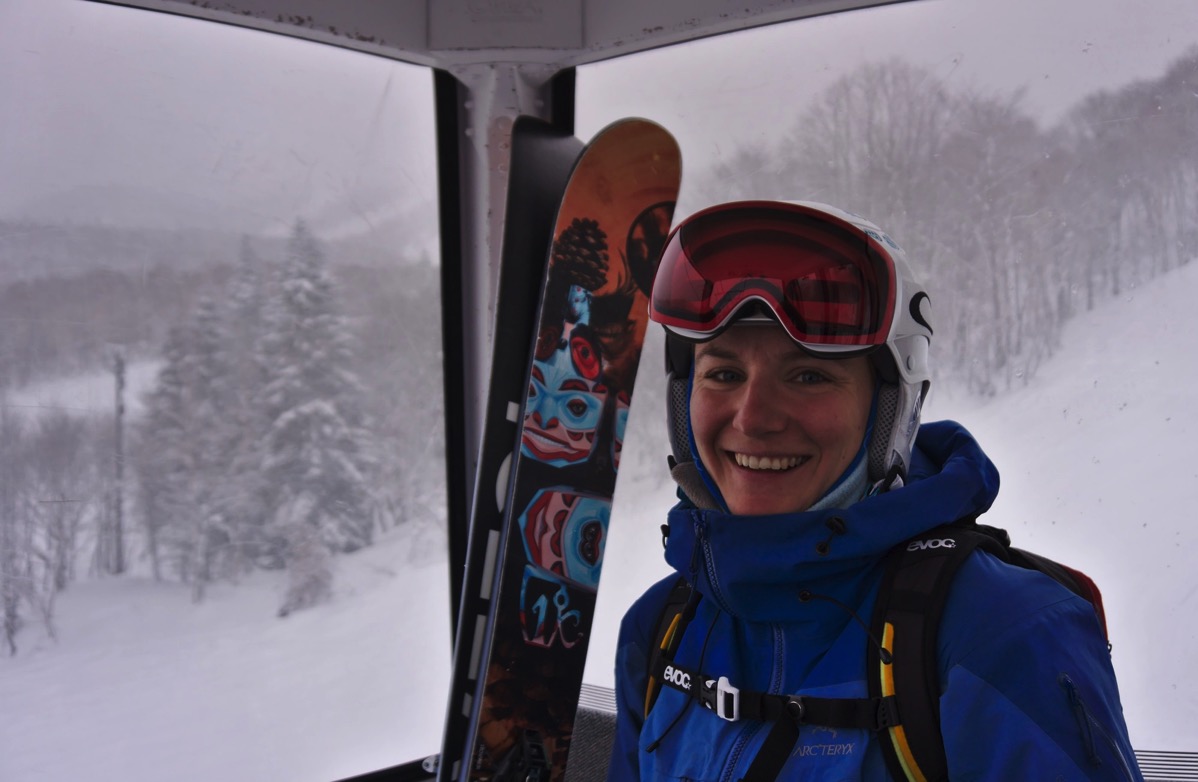 Vibeke smiles in anticipation of POW!

On our friends' last day, we skied in Niseko again, for once in bouts of sun. Despite competition for the powder, we found of own little powder paradise - albeit with some traversing - in the Annapuri area. 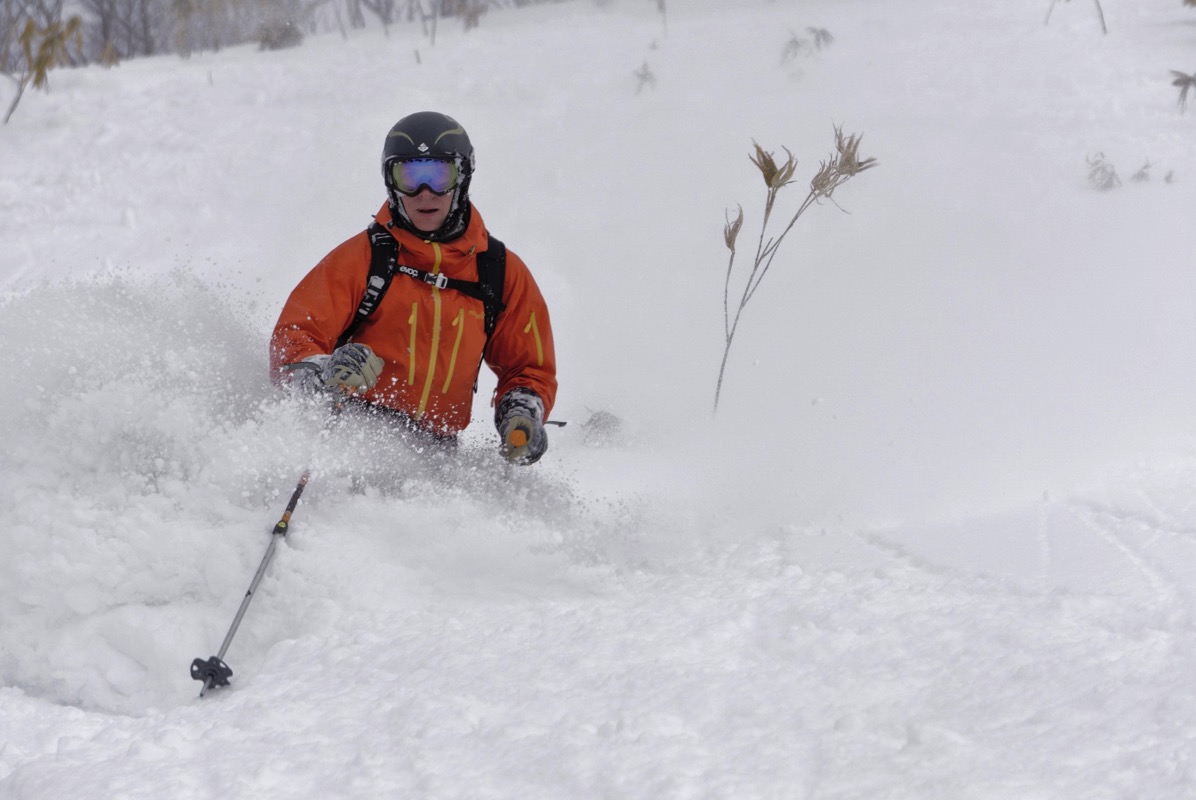 After our friends left, Dad arrived. We started by taking him to Kiroro, which upheld the standard from our previous visit. And now we knew how to get in line for the backcountry passes as fast as possible! 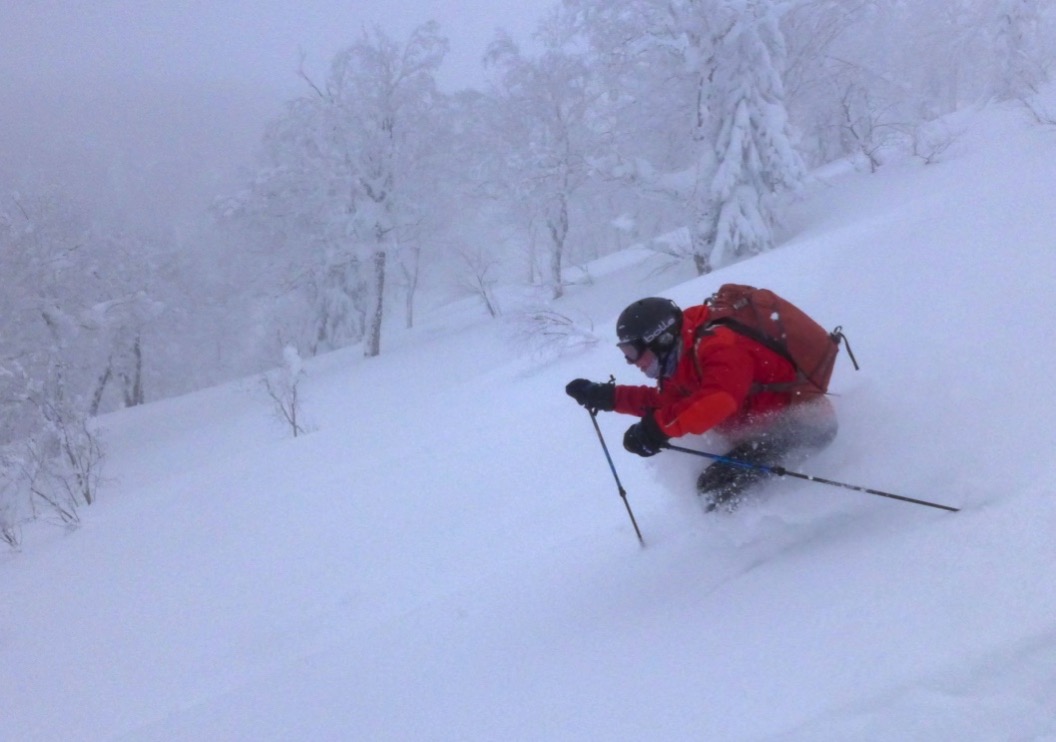 Dad gets aggressive in Kiroro.

The next day brought high winds, and we feared that many of the lifts would be closed. Audun decided to rest his broken wrist again, while Dad and I decided to go skinning on the backside of Niskeo mountain. The strong winds and low visibility virtually limited us to skiing below treeline. Despite the adverse conditions, the snow collected throughout the day and we got in some laps in deep pow in the trees.

Our last day in the Niseko area, the weather had cleared off and we hoped that the storm had deposited lots of snow at the Rutsutsu ski area. Unfortunately a lot of it had been packed by the strong wind. But it you bypass the ‘Danger! Keep out!’ signs and are willing to skin out afterwards, good things can come your way... 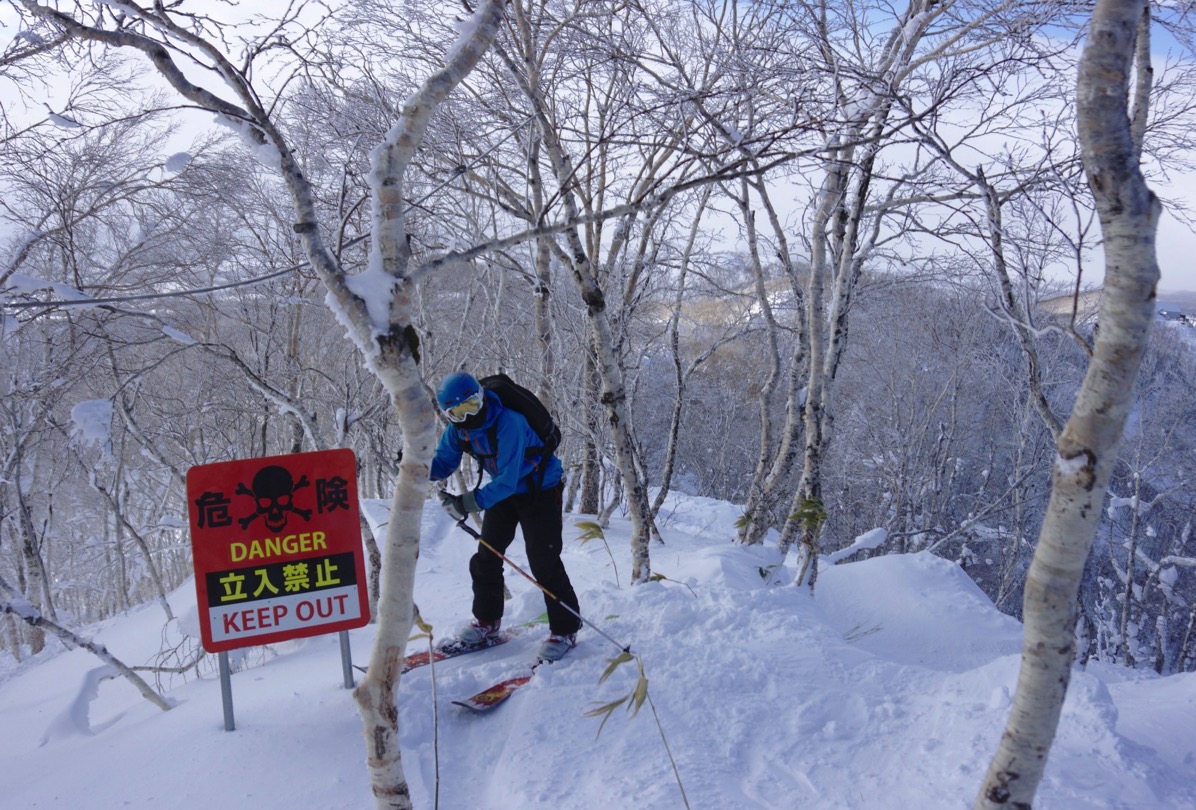 Ready for an adventure!

Next we travelled to the Furano region, for a new host of mountains to explore. We rented a Japanese style apartment on the outskirts of Furano town, and were delighted when we realized we could go skiing right out of our back door! 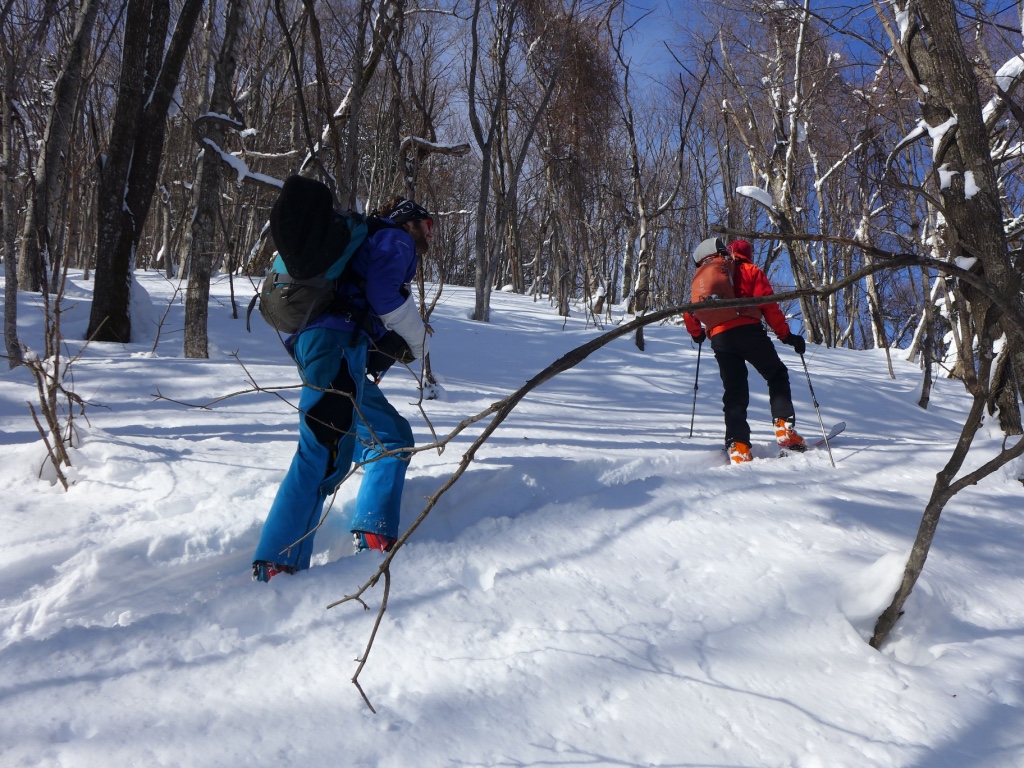 Skinning through the trees in Furano

It was a beautiful, but very cold day in Furano, and although the snow was good, the terrain just out of our back door wasn’t steep enough for much fun. We got a map and some advice from an Australian working in a ski shop, and decided to try a ski tour in the Tokachi mountains the next day. This turned out to be a total bust - the wind had collected the snow on the west-facing aspect near our apartment, but blow it off the main, east-facing aspects of the Tokachi mountains. What I can’t recommend enough, however, are the onsen (hot springs) of Tokachi. Fukiage Onsen is hands down the best onsen I’ve been to in Japan. There were amazing outdoor pools, built out of natural stones, with all different temperatures of water.

Despite the disappointing skiing in Tokachi, we now knew that all the good snow was on the west facing slopes near our house. We just had to find the right slope. After pouring over our topo maps, we picked out a route that looked promising, up some slopes near Ashibestudake. It was a total gamble - we didn’t even know if we were allowed to ski in the valley we were headed to!

The gamble paid off. Big time. It turned out a group of Americans was being guided on the same mountain as we planned to climb. They were being driven in on scooters by some locals, packing down the flat skin into the valley into a manageable trail. In addition, we could trade off with them breaking trail. And in this serious deep snow, breaking trail was hard work. 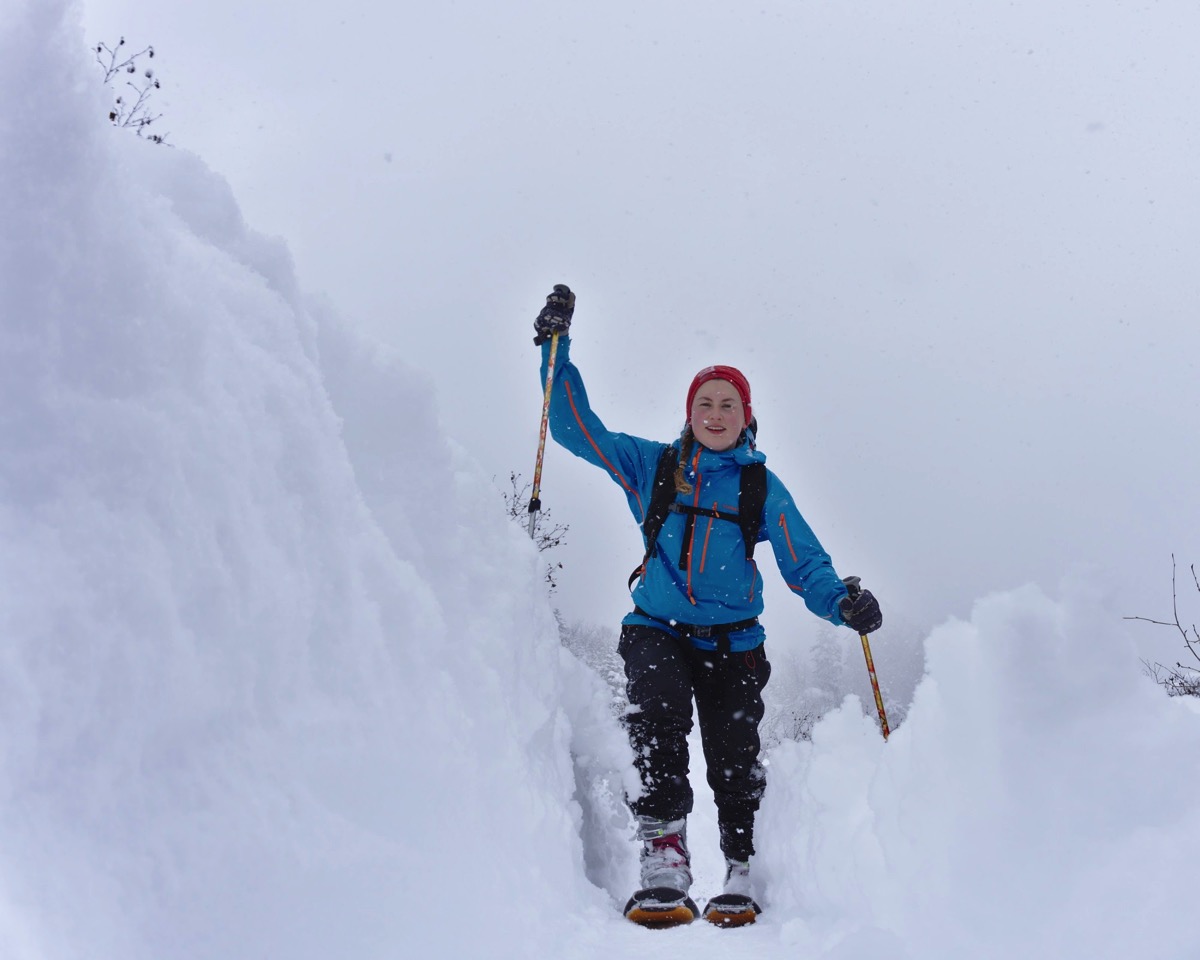 I’m smiling because I don’t have to break trail, so everything is easy.

It was totally worth all the work. Although we didn’t make it up to the top of any mountain due to low visibility and potential avalanche danger, our descent through the trees was the best of the trip. Waist-deep powder, completely unmarked, all for us. No worrying, just point your skis downhill and fall with them. 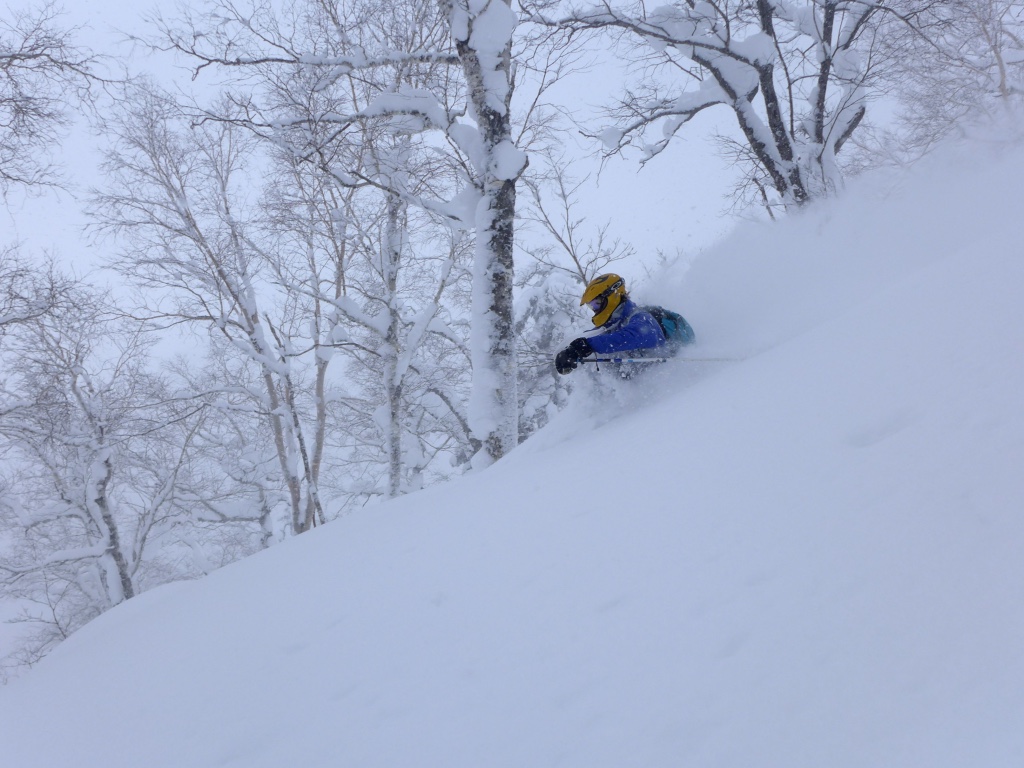 Audun cruising through the pow 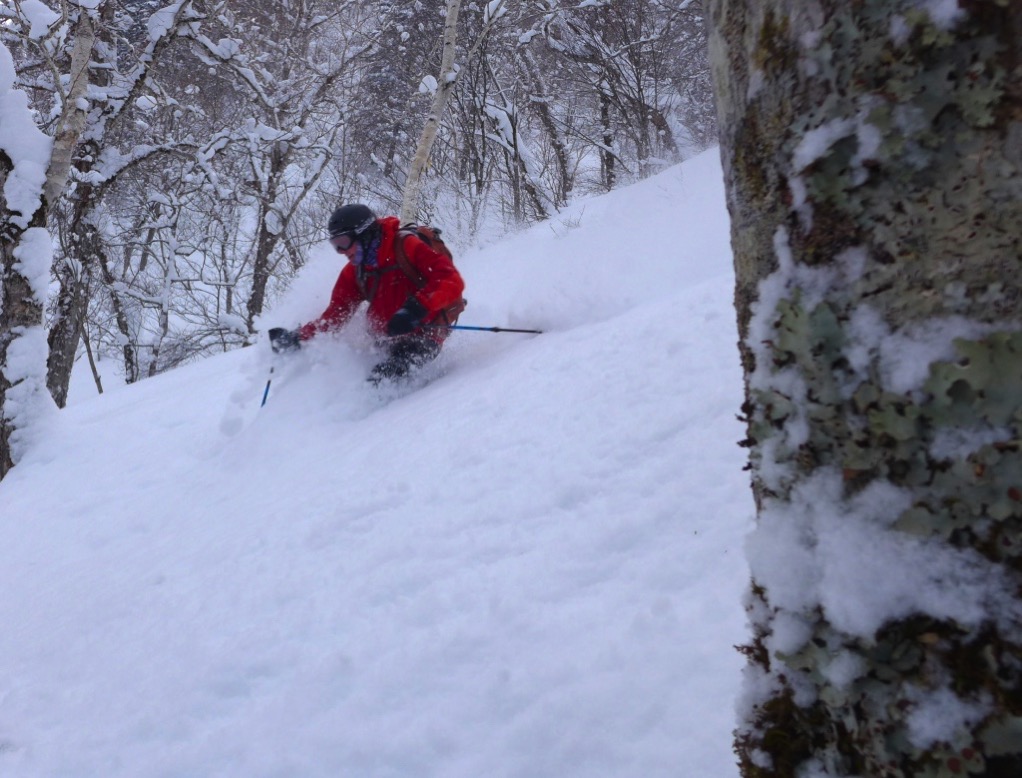 Dad finds an open glad in the trees. 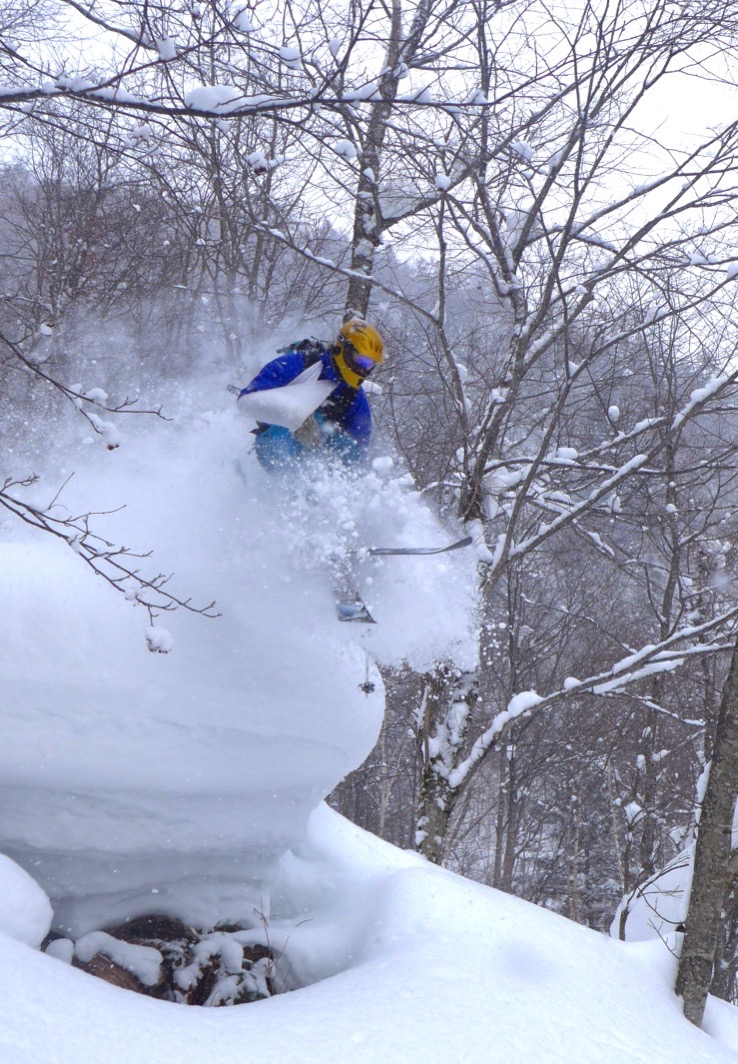 Suffice to say we went back the next day. Unfortunately the temperature had risen, and powder had compacted. It wasn’t the same magic as the day before, but we still got in some good turns. 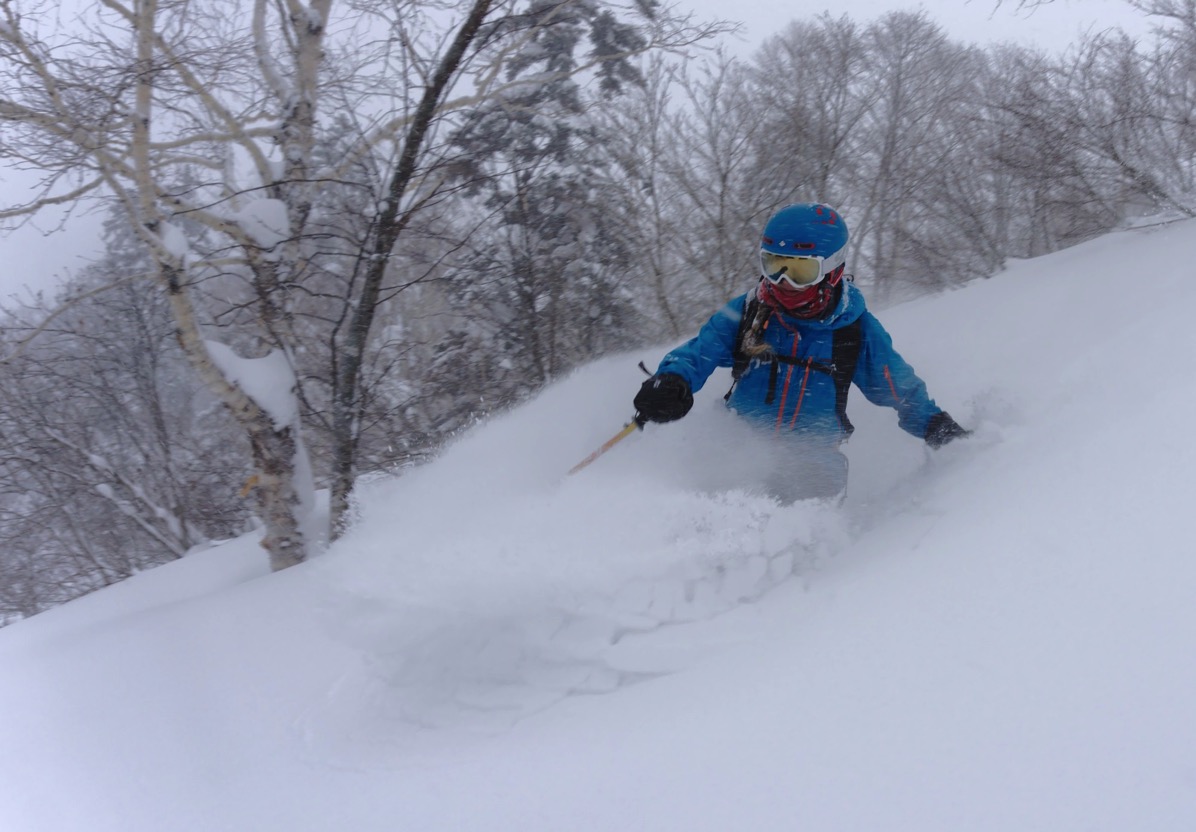 Heavier pow, but still so. Deep!

On our final day, a big storm rolled into Furano, and we decide try our luck with the lifts. The snow that fell added to the already deep powder, compacting into extremely heavy, almost cement-like snow. It was hard to move forward off of the groomed pistes. At one point, I was actually stuck in waist-deep snow for a couple of minutes, kicking with all my might to get out. In the end, we had to contain ourselves to the pistes - there was simply too much snow!

Sayonara for now Japanuary - you were wonderful!