Cycling in the French Alps, part 1

In the last week of June, Audun and I jetted off to Geneva for a week of cycling in the region where I learned to love road biking during my exchange year in France. This is the story of that week.
Day 1: Geneva. Mileage: 0
It’s always a nuisance to lose baggage when travelling, but especially so when that baggage consists of two bicycles and your entire vacation plan consists of riding them. A baggage workers’ strike stranded our bicycles in Brussels, and we were left hanging in Geneva, possibly the most expensive city in the world. Knowing that our travel insurance would help us out, we enjoyed a leisurely day seeing the sights in Geneva, wondering when (or if!) our bikes would arrive. 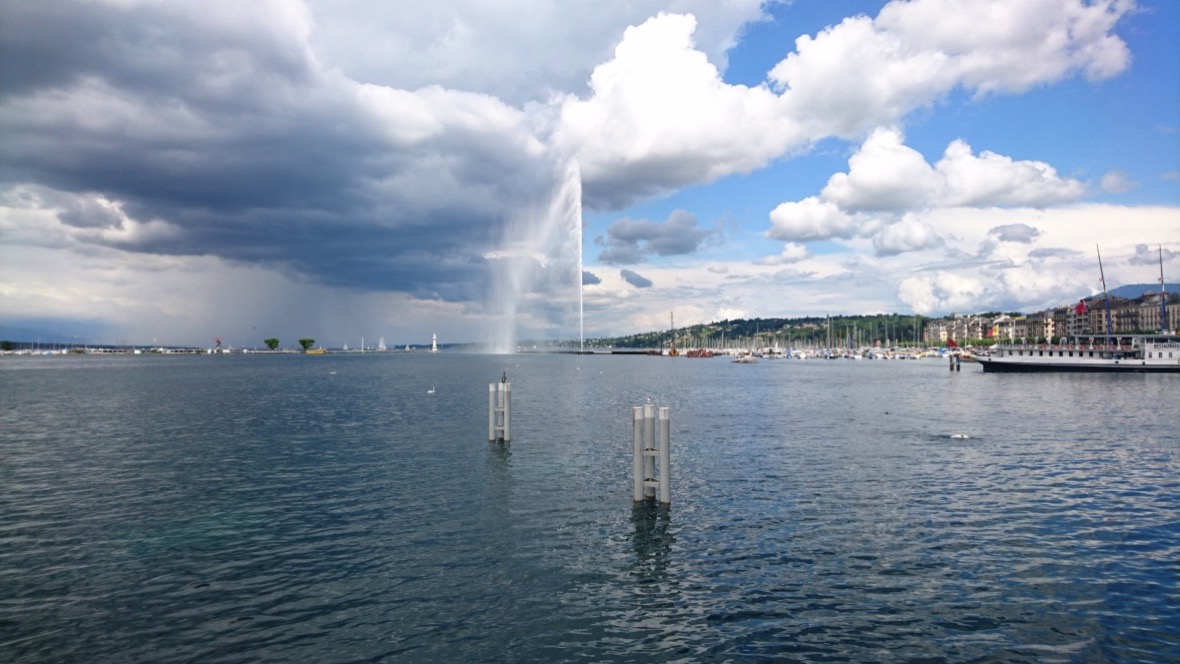 Jet d’eau divides the sky in Geneva
Day 1: Aix-les-Bains - Grenoble. 83.7K, 2279 vertical
The next morning, we still hadn’t received any information on the status of our missing bikes, so we decided to go back to the airport to find someone to yell at. To our surprise, our bikes were in fact already at the airport waiting for us! The tracking website was just useless at giving us updated information. So we turned on a dime and sped back to our hotel to repack and catch the next train to Aix-les-Bains. Originally we had planned to ride out of Geneva, but luckily we could just take the train to make up for the lost day.
From Aix-les-Bains, our ride for the day was the classic ‘Trans-Chartreuse’ route I rode on several occasions during my year in Grenoble, but this time in reverse. It was an ambitious day given our noon start, but we were revving with pent up energy from our day spent waiting. 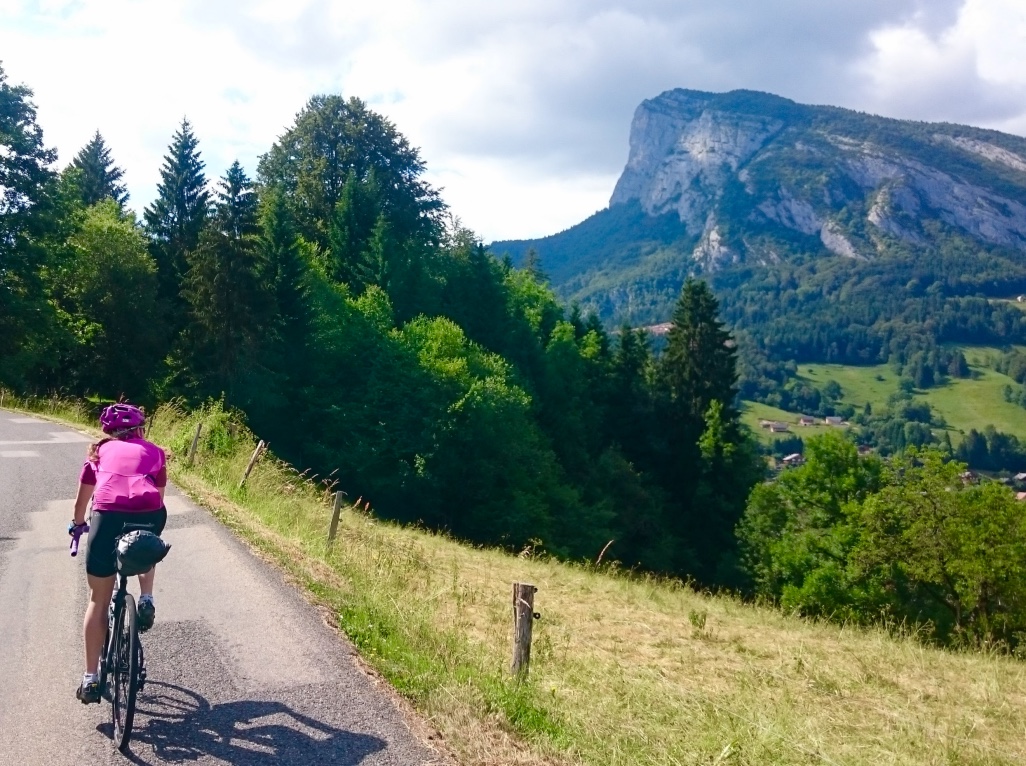 The mountains in Chartreuse are totally different from Alpes. They come from a sort of limestone plain that was tilted upwards and broken up as the Alpes rose up.
I was on a brand new bike, a Genesis Datum that I bought in May. Despite having all new components, on the first day I discovered an ominous grinding sound in my bottom bracket, and halfway up the Col de Granier, an oil leak from my hydraulic disk breaks.
While the bottom bracket noises were annoying, the hydraulic oil leak lost me the use of my front brakes. During the short but steep descent from Col de Cucheron, I started to worry about the even longer descent to Grenoble in our future. I felt like I had no control, only being able to brake with my back brake. As we swooped through St Pierre en Chartreuse, salvation came in the form of a bike shop. This bike shop happened to be open, even though it was 6 pm on Sunday afternoon. Not only that, but the proprietor happily drove 15 min to the mountain bike center where he serves bikes to pick up the tools he needed to bleed my breaks, and happily did so for only 10 euros. I was amazed at his generosity and elated to have working breaks again. 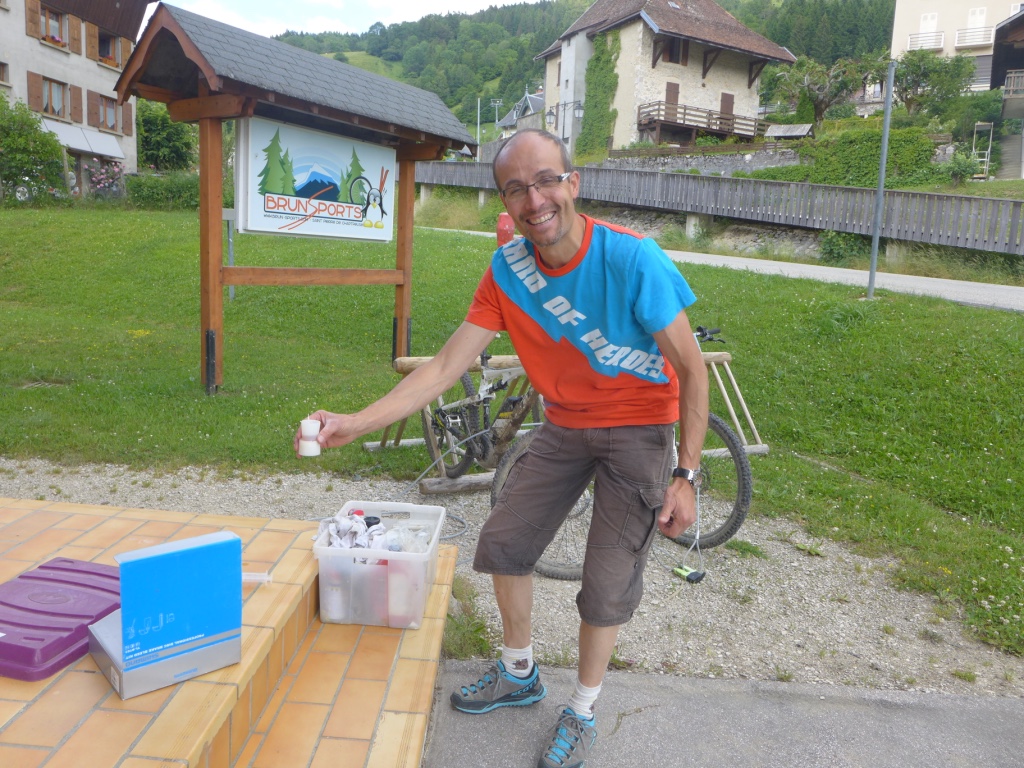 My favorite bike mechanic in France. Seriously.
With my brakes in order, we tackled the final climb to Col de Porte before rolling down 1000 meters to Grenoble. I felt an eery sense of homecoming, like I had lived there in a past life or something. I still knew my way around, and all the houses and shops were still in the places I expected them to be, but all the people I associate with living there (other exchange students, or french students who have now graduated and moved) are gone.
Day 2: Grenoble - Die. 131K, 2594 vertical
The next day we started the day with steaming bowls of coffee and crusty bread at my favorite breakfast place in Grenoble before heading for another climb I did numerous times during my exchange, the long road up to St Nizier de Moucherotte. Le Moucherotte mountain gazed down at us during the climb, the solemn sentinel of the Vercors. 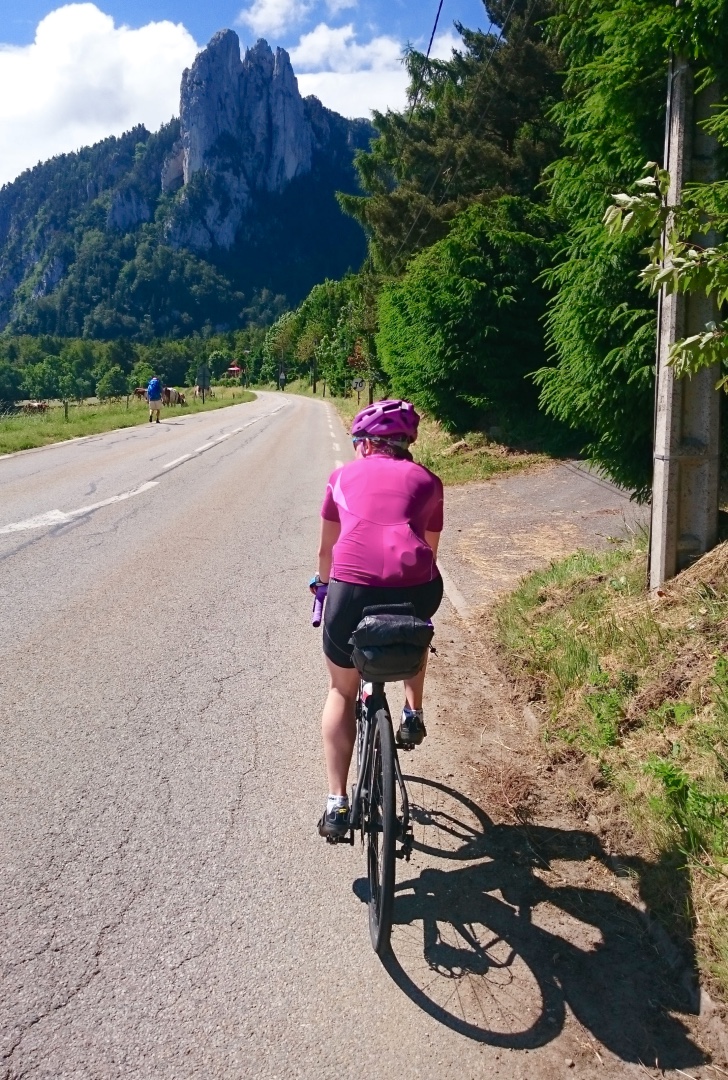 The rocks that make up Les Trois Purcelles, a well-known climbing route, above me on the climb to St Nizier.
After entering the Vercors, we took the road down the west side of the massif through Les Gorges de la Bourne. The road winds past limestone cliffs, sometimes so narrow that the road is carved through them, other times opening into a wide panorama. It was a long, gentle downhill, during which we gradually lost all the elevation we had spent the morning gaining. 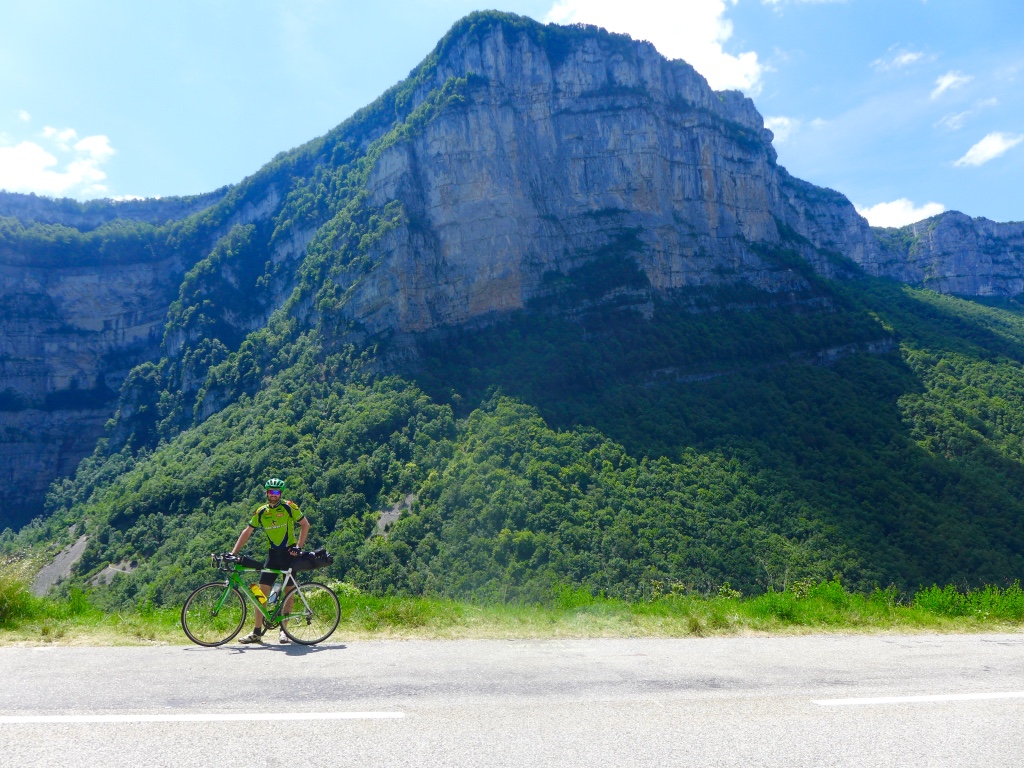 Audun blends in with the scenery in Gorges de la Bourne
After lunch in charming Pont-en-Royans, it was time to tackle the second big climb of the day: Col de la Machine. Now I was venturing into uncycled terrain. My friend Roddy had spoken warmly of Col de la Machine, but I had never gotten around to doing it, given that it was half a day of riding from Grenoble just to get to the base.
A sign pointed us in the right direction, and we starting the brutal climb in what was now the heat of the day. I couldn’t figure out what all the fuss was about; we were climbing steeply through the forest, with occasional glimpses of the flatland Drôme region spread out below us. We were also surprised to see no other cyclists and just a handful of cars, mostly trucks, on the road. 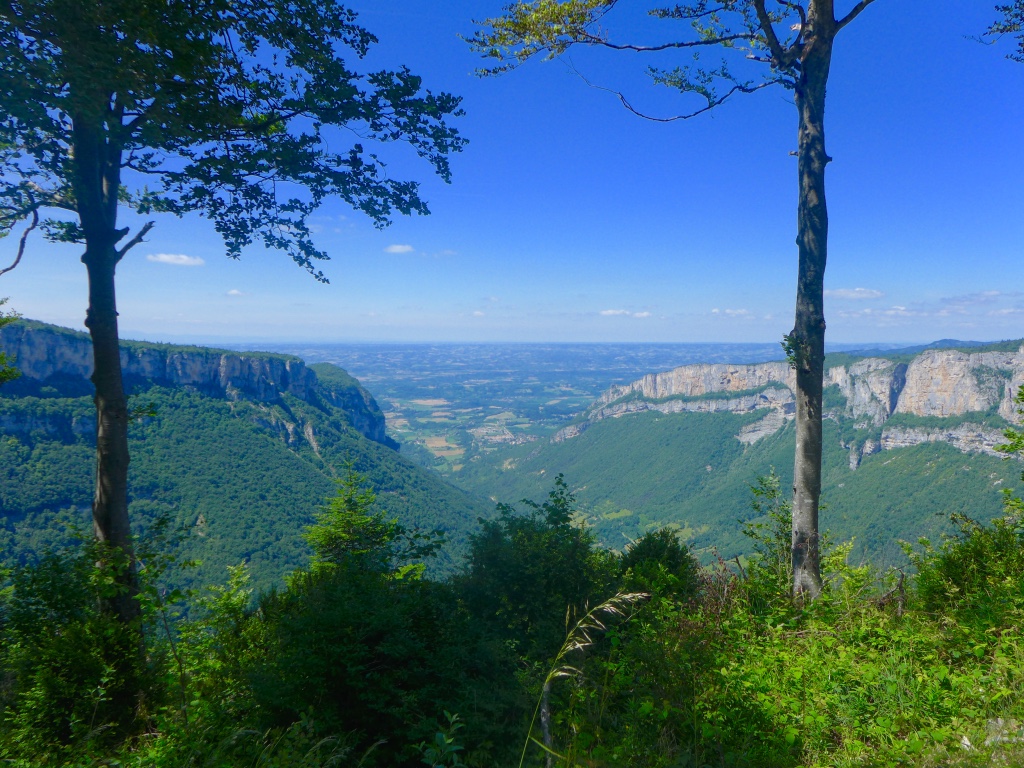 Looking back at the flatlands from the road up Col de la Machine
As we approached the top of the climb, we started looking at Google Maps and realized that there were two roads up Col de la Machine. From the top of the Col we could see the other road, which cut dramatically through more limestone cliffs and was clearly much more spectacular. Having just climbed 800 meters, we weren’t about to turn around ride back down, but I was disappointed that we had ridden the wrong road up the Col. There will be other views, I told myself.
After the final climb of the day to Col de la Chau, we had well over 2000 vertical meters and nearly 100 km in our legs. It was time to rip the descent down to Die. From the top, the road took us through a sharp tunnel. As I pedaled out of the darkness on the other side, I was caught by a gust of wind that nearly threw me off my bike. I put my foot down, blinked and gasped in awe at our descent laid out before us. The road zigzaged steeply under moonscape-like limestone features. In the distance a hazy view of rolling foothills spread as far as we could see. 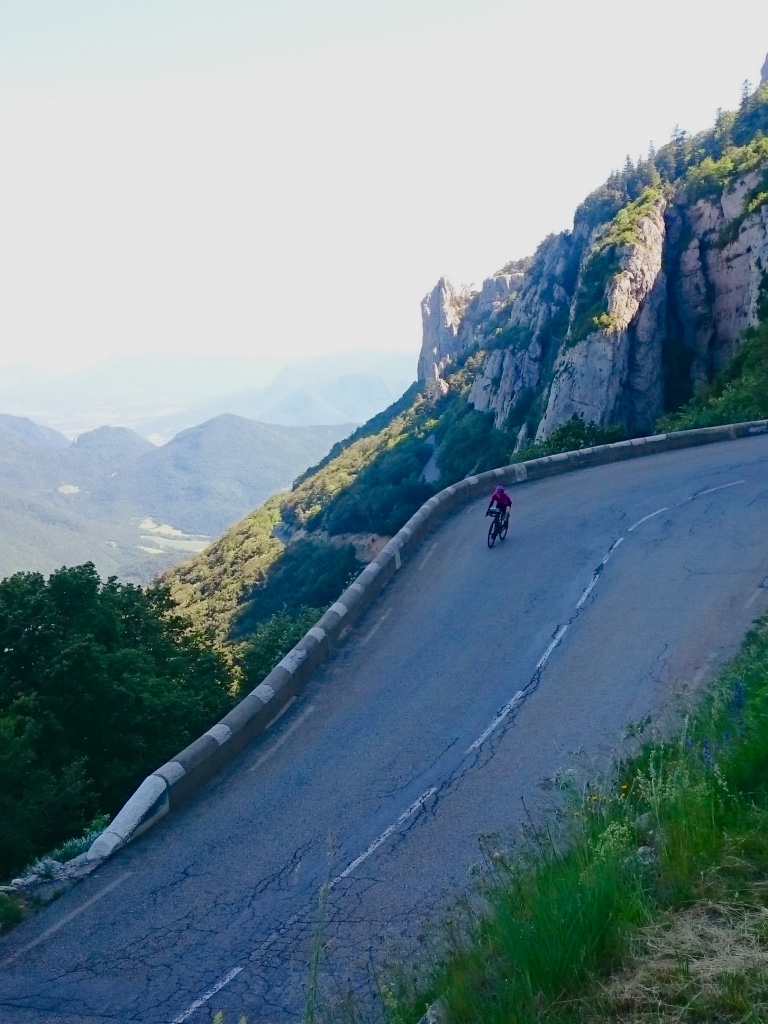 The descent to Die.
We soared down to Die, elated to have finished our first really long day.
Day 3: Die - La Mure. 85.3K, 1846 vertical
The next day was supposed to be a kind of easy day before we hit the Alpes for real. This was hill country though, and there was still a big climb on the schedule. Up Col de Menée we went, and I soon began cursing the absurd idea that this day would be easy. 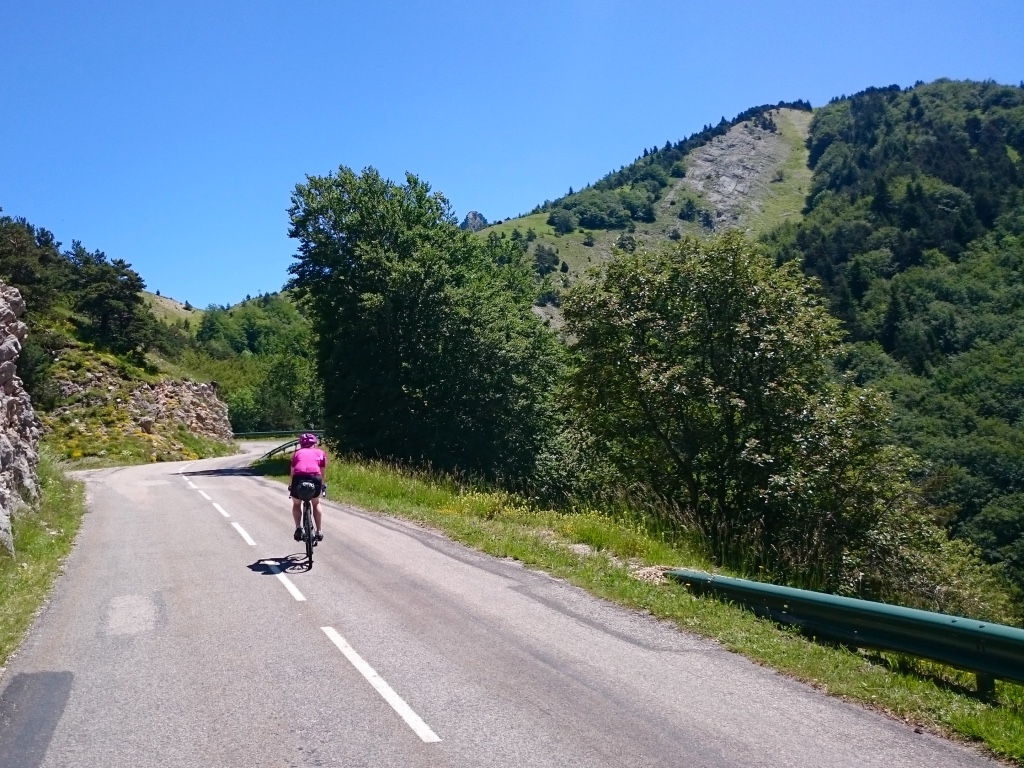 Grass-covered hills surrounded the hot, dusty climb to Col de Menée
From the top of Col de Menée, we were treating to views of Mont Aiguille, one of my favorite features in the Vercors skyline. Meaning ‘Mount Needle’, this monolith jabs at the sky, defiant. I have never climbed it but had admired many times on hikes. 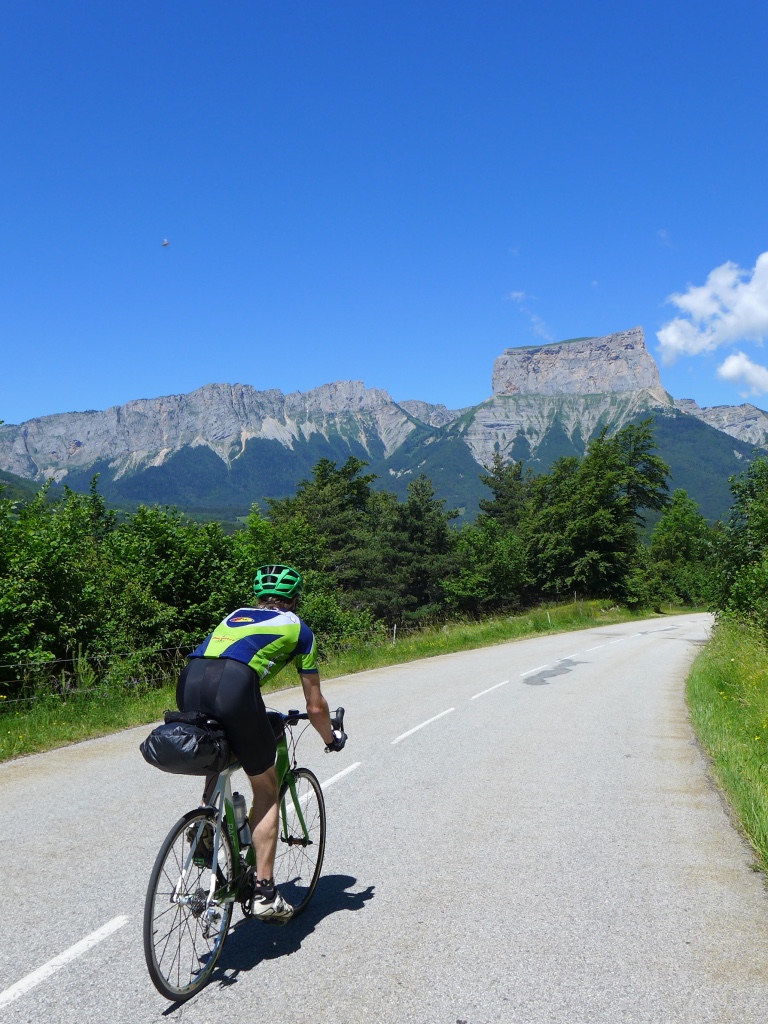 Audun and Mont Aiguille
Near Clelles, we decided it was time for lunch, only to find that all of the shops in Clelles were closed for lunch. Of course! We backtracked to a snack bar we had seen, and managed to order two whole (but tiny) partridges with an accompaniment of ratatouille. Only in France!
The rest of the day I was hot and bothered and just wanted to get to La Mure. I sweated and cursed myself for designing this hilly route all the way up the last hill to our destination for the evening. And tomorrow we would be climbing in the real Alpes...
To be continued.
- The Wild Bazilchuk
Labels: adventure bike touring grenoble road biking