In the days leading up to Sentrumsløpet, the largest 10K race in Norway, I knew I was perfectly capable of PRing. I have been running all winter, even putting in time on the fearsome indoor track at Bislett. I felt myself getting faster and stronger, and conquering speed workouts, which I have always been my weakness. During our last track session, Audun and I ran kilometer repeats, and I nailed each one at faster than goal pace. Still, I was scared. Terrified I wouldn’t live up to my own expectations. Afraid I wouldn’t be able to make myself race with the intensity necessary to take another big chunk out of my 10K PR. 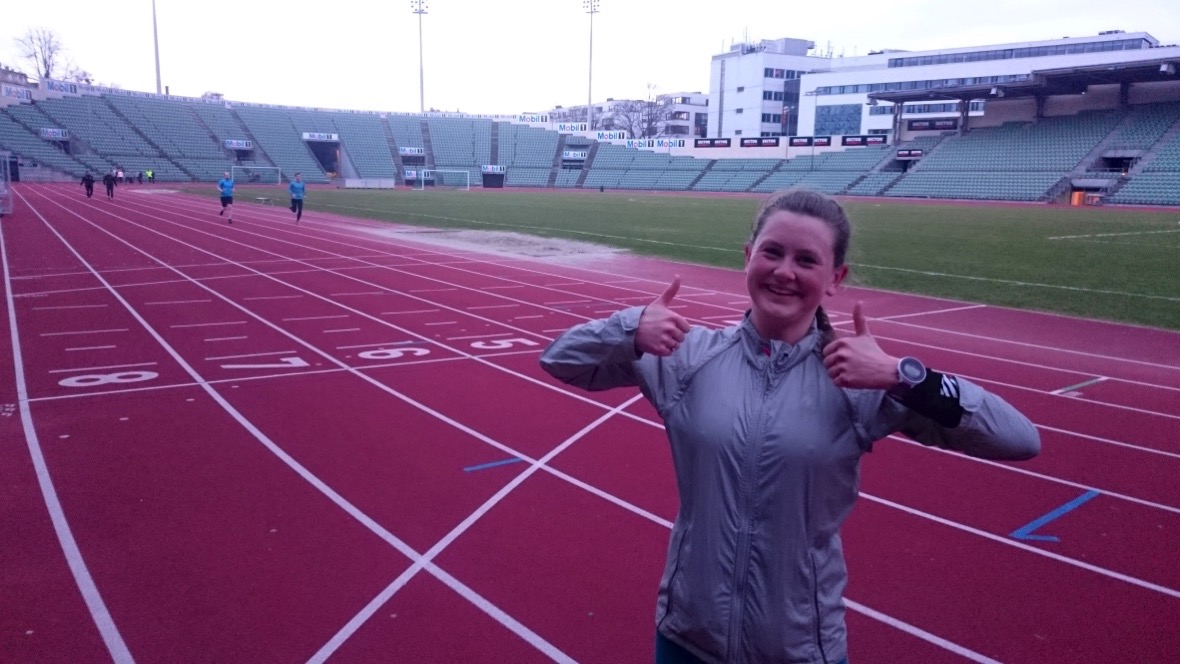 Thumbs up for a good final workout at Bislett.

I’m starting to get superstitious about race day routines. I have to braid my hair a certain way (a double french braid that joins into a single braid at the base of my skull). I have to eat very specific things (pre-race pancakes). My legs must be freshly shaved (something I usually don’t bother with!). I think very carefully about what data fields I want my Garmin watch to display, and how I will use this information during the race. While none of these things make my self-doubt go away, they give a semblance of control.

Sentrumsløpet didn’t start until 4 pm, which I though was terrible. Somehow I managed to while away the hours, and soon it was time to go downtown and pick up our bibs. Audun and I thought there would be long lines and got there way too early. I was too nervous to do anything but sit around on a park bench and waste time. It was cold out despite the sunshine , and I started to second guess my clothing choice of 3/4 length tights and a t-shirt. Audun and I joked that if we were cold it might make our legs go numb, which could be performance-enhancing.

We were meant to meet our friends Vibeke and David for warm-up, but they were running late. We wondered if they had backed out of the informal couples competition (lowest combined time!) we had jokingly agreed upon after Jotunheimen Haute Route. I didn’t see them before the race, but they did show.

Finally it was time to warm-up, and I had a purpose again. We ran a conversational lap around the royal palace, and I felt the blood rushing to my extremities. The weather flickered between bright sun and showers of snow and hail. Typical Norwegian spring weather. My whole body seemed to ache slightly, but I knew it was just just pre-race jitters. On our second lap around the royal palace, we ran strides and a few simple drills, and I was comforted by the familiarity of doing the same warm-up routine I did before all of my track sessions this winter.

We meandered back to the enormous start area at Karl Johan street, and jog up and down the street with undulating masses of nervous people. Soon it was time to line up in our respective waves to line up, and Audun had to go up front. I asked him to take my picture before he went, but I was nervous and bouncy and I could’t decide how to pose. 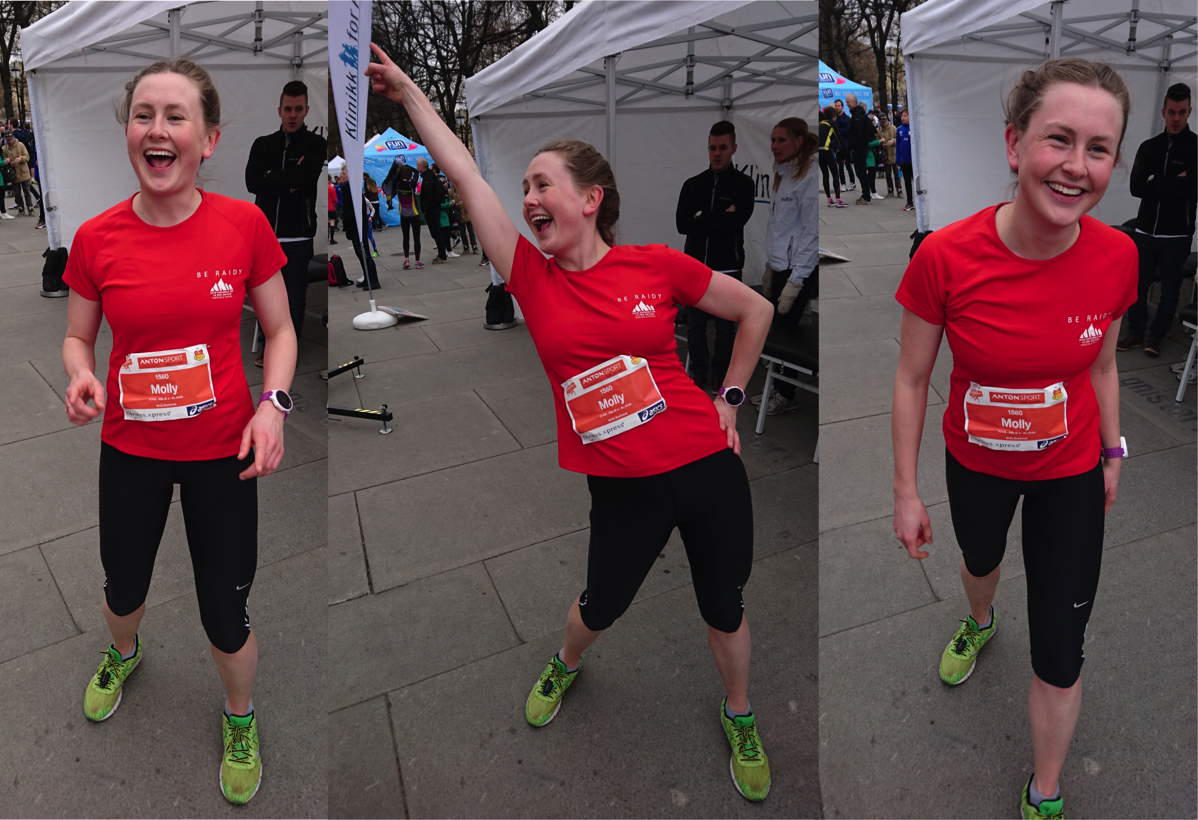 I call this: Portrait of a Nervous Runner

I found the front of my wave, and then decided to move back a little ways to not get dragged off by the speedsters at the start of the heat. I stood, jumping up and down on the balls of my feets, just barely able to see above the heads of the masses of people in front of me.

Somewhere in the distance, the gun went off, and the crowd slowly ground into motion like an old-fashioned steam engine. After walking 100 meters to get to the start arch, the crowd loosened up and I was able to accelerate into a run. The first half a kilometer are uphill to the palace, and I promised myself I wouldn’t looked at the pace on my watch until I got to the top of the hill. Still, why was everyone going so slow? This was a 10K, after all, and these were supposed to be people who would race about the same time as me. I passed a bunch of people, not wanting to loose too much time on this initial hill. 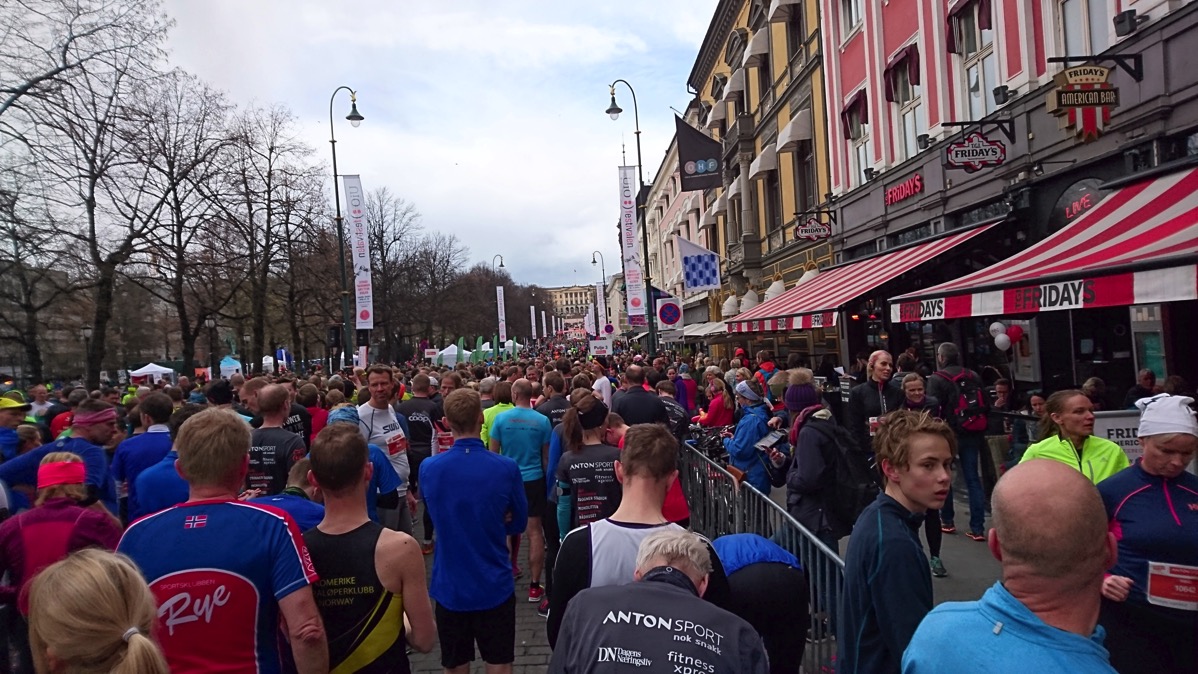 Milling around with thousands of other runners, the start arch and royal palace in the distance.

After passing the royal palace, the course was flat for the next couple of kilometers. I picked up the pace, repeating to myself: Fast, smooth. Fast, smooth. Fast, smooth. The mantra synced with the rhythm of my feet, but in truth I felt neither fast nor smooth. Everyone around me was huffing and puffing and I knew we looked nothing like the gazelles at the sharp end of the race. Still, I was moving at a good clip for me, nothing to worry about yet.

Then the course took us onto Frogner park, home of Vigeland’s famous sculptures. National monument aside, the path through the park is made this weird gravel that seemed to roll around like so many tiny tennis balls underfoot. The course climbed once again, and I saw my pace going down. Oh no, I thought, it’s all over. I have failed, and I’m not going to PR. It will all have been for nothing.

Luckily there was more than one voice in my head that day, and the other voice was feeling argumentative. You can make up these seconds! it insisted. What goes up, must come down! Smooth! Fast! I thought of Haruki Marukami’s famous quote: Pain in inevitable, suffering is optional. I started repeating it to myself, and the words formed a complex rhythm, juxtaposed on the quick slap of my feet and the breathy Fast, Smooth!

Was I suffering? I wasn’t really in pain, I just didn’t want to go any faster. I was out of Frogner park by now, and the ball of Wild Bazilchuk was rolling down the hill. Everything got sloppy in my head, and I started mixing up pain and suffering in the Marukami quote. Wait, pain isn’t supposed to be the optional one?! Oh shut up.

I passed the 5K mark, and pressed my lap buttom. 21:40. I had hit my split for the first 5K perfectly. There was nothing left to save now, I had to muster everything I could to go balls out to the finish. The next kilometer was all downhill, and I was flying. Bank the time, I told myself, you may need it later. My heart rate had been about 5 beats lower than it felt like for the entire race, so I started to ignore that particular metric.

When the course flattened out again, the lazy voice in head came sneaking back out. You’ve made plenty of time, it said, even if you just cruise to the finish, you’ll still PR. Why even bother to work this hard at all?

I had to find a way to make this positive, even though I was going so painfully hard. Then I remember the science tidbit I had heard somewhere, that smiling forces your brain to release endorphins, and that makes you feel happy. So I smiled as hard as I could, grinning like a maniac as we ran the short loop below Akershus fortress. Well, at least I look like I’m having fun! I thought.

Finally I passed the sign for the final kilometer, and I tried to find a higher gear for my legs. Almost immediately, a wave of queasiness met me, which I’m never had happen in a race before. The final kilometer was mostly uphill, with a slight downhill to the finish line. As I crested the top of the hill, I looked at my watch to see I had 15 seconds left if I wanted to beat 43 minutes. I mustered everything I had and took off sprinting, which didn’t turn out to be much faster than I was already going. I crossed the finish line in 42:58, totally spent. I had done it, I had beat my PR by 1 minute and 22 seconds! 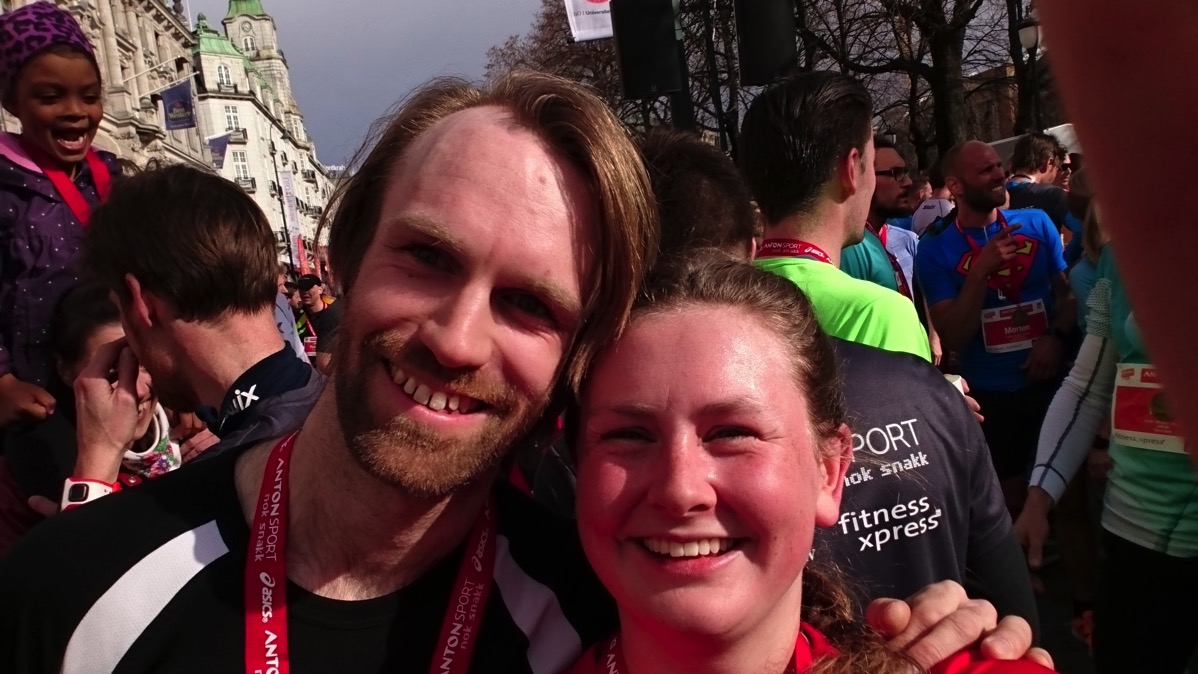 The funny thing is, all I can think about now is: how fast can I go? Time will tell.