What I learned about running in 2015

In 2015, I ran more than ever, totally 1953 kilometers and 46 007 vertical meters. It was the second year I decided to train ’seriously’  for running races, the first year being 2014 for Ultrabirken. I have had several successful races, but one less successful (Nordmarka Skogsmaraton, more of which in a moment), and one DNS (Ultravasan) due to injury/undertraining. A new year will bring new chances, and I hope to become even stronger in 2016. Here’s some lessons I learned in the last year that I will take with me into the 2016 season.
Racing really gets to me. I only raced 5 times this year (well, 6 if you include the spontaneous Scottish hill race), and looking back, the clear trend I see is that I let racing wrack my nerves too much, especially if I have high expectations of myself. Before Fjellseterløpet I was so nervous that I couldn’t eat after lunch, even though the race was at 6 pm. Fjellseterløpet was short though, and that mistake didn’t matter so much. Where they did matter was in the longest race, Nordmarka Skogsmaraton, I ran this year. I plan to race more often in 2016 and try to lower my expectations for every race. After all, you can’t PR every time! 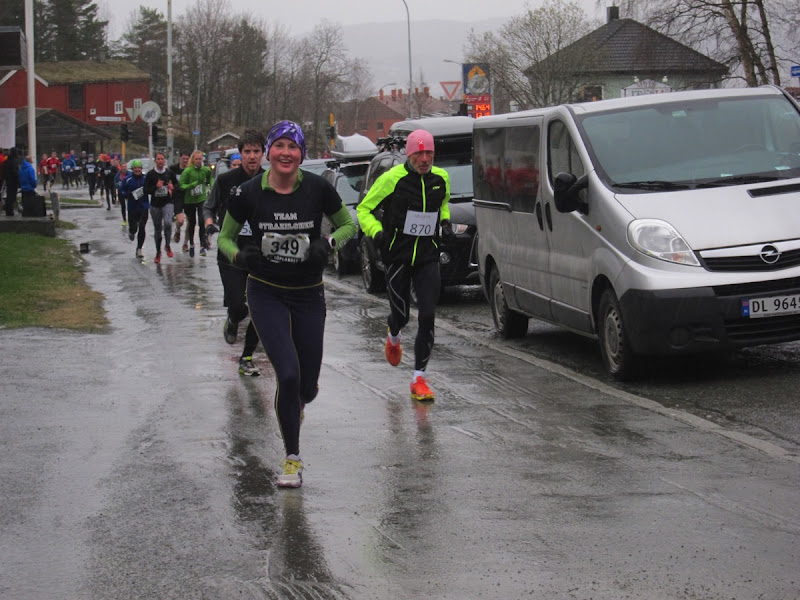 Running a PR on an empty stomach in the rain at Fjellseterløpet.
I need to up my mental game. In some ways, it’s strange that I consider Nordmarka Skogsmaraton such a failure. I did, after all, PR by nearly 20 minutes. There are two reasons I’m not satisfied with how that race went. First of all, I am sure I was fit enough to run at least 10 minutes faster than I did, and secondly, I didn’t enjoy myself, not one bit. And although some people might scoff at my suggestion that marathons should be fun, I am definitely in the ‘if it’s not fun, why do it?’ camp. So where did I go wrong? I let my race nerves get to me. At the start of the race, when I didn’t immediately feel great, I let my internal monologue tell me I was having a terrible day and couldn’t possibly reach my goals instead of cheering myself on. I need to find a way to turn a bad day into a good day, to sell myself a tale of success even if I’m feeling crappy, because once you’re fit, racing is a mental game. 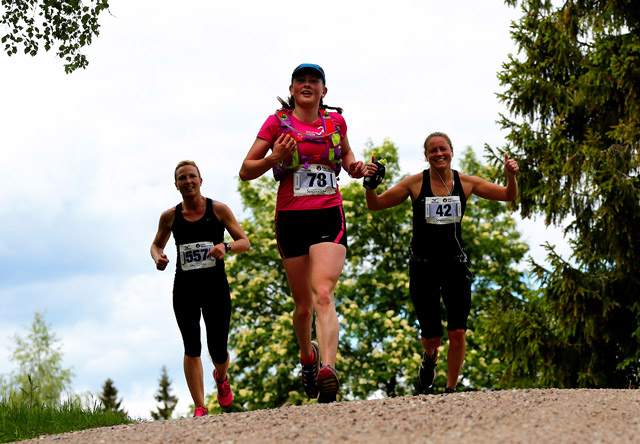 See how the two women behind me are having way more fun than me? At Nordmarka Skogsmaraton.
Consistency is king. The real way to get fit is not to eat some magic food or run some special type of interval, it’s to keep training. All. The. Time. Part of the game of becoming a better runner is becoming someone who is out running, despite dark or cold, despite time constraints. I feel I succeeded pretty well at consistency in running in 2015, but consistency also includes the stuff outside of running, especially strength training. This year I will strive to find time to do injury-preventing strength training, because being fit and injured is a horrible feeling. Which brings me to… 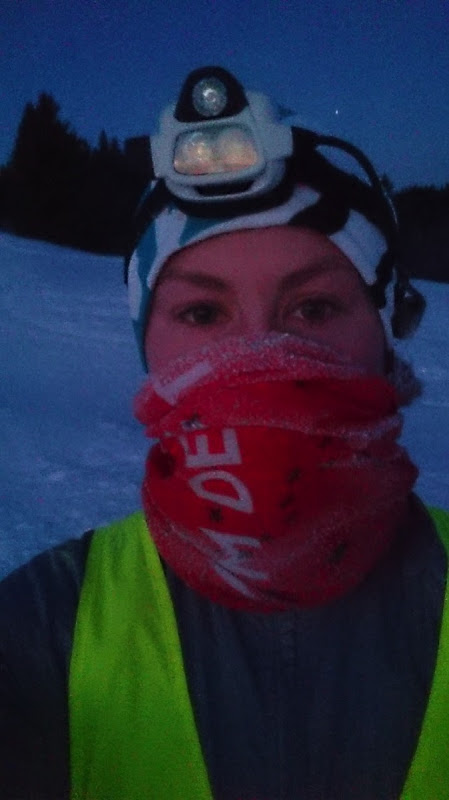 Consistency is -10 C at 6 am on a weekday.
Respect the 10% rule. For you non-runners, the 10% rule is a rule of thumb that says you shouldn’t increase the distance you run by more than 10% per week in order to avoid injury. This is one of those stupid things that you read everywhere but you don’t actually believe until you’ve broken it and seen the consequences. Without fail, every serious twinge I had last year was related to a spike in mileage. The most serious injury I had in 2015, the nagging foot pain that lead to me DNSing Ultravasan, was due to a training block that looked like this: 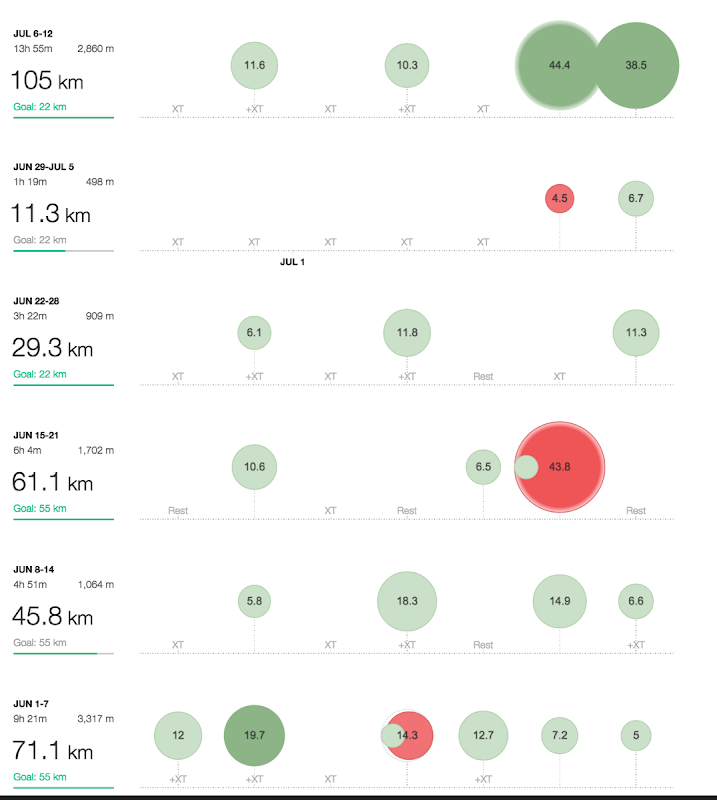 I’ll just spontaneously run a 100 km week. FOOL!
And to end on a positive note… I’m not a slow as I think I am. I typically characterize myself as a slow twitch, endurance type of person that could only ever be good at marathons or ultras. But I definitely feel like the 10K races I’ve done (Sentrumsløpet and Hytteplanmila) have come relatively easy to me. Although 10Ks aren’t exactly sprints, I have started to get excited about becoming a little faster.
So with this wealth of knowledge and optimism, what's in store for 2016? I’m glad you asked, dear reader. First off, I have signed up for Oslo Ecotrail 45K in late May, and I plan to run Sentrumsløpet 10K again in April, with a goal of seeing sub-43 minutes. The more exciting part is that I have my name in the hat for Orsières-Champex-Chamonix (OCC), which one of the little sister races of the Ultra-Trail du Mont Blance (UTMB). By ‘little’ sister, I mean that the OCC is only 55 kilometers with 3300 meters of elevation gain. The UTMB (and OCC by association) are the biggest ultra-trail running event of the season in Europe, and really want to be there. The lottery for the 1200 places at the OCC will be drawn on January 13, and I’m totally counting down the days. If I don’t get selected (and there is a very real chance that I will not), I will try to sign up for Tromsø Skyrace, which is also in August. Additionally, if I don’t get drawn, I plan to run Ultrabirken again in June to get qualifying points for next year’s OCC. The bottom line: I’m going to Chamonix, either this year or next.
Are you psyched? Cause I am!
- The Wild Bazilchuk
Labels: chamonix injury races running Scotland ultra