As a late Christmas present, here’s my Morocco trip report (only 8 weeks after the fact!).

Since 2012, The String trail in the Atlas Mountains has been the difficulty against which I have measured all other trails.

Quoth Audun on a steep, exposed trail above Lake Tahoe: “That was even harder than The String, Molly!” I never believed him. I thought nothing would ever top the String. In my mind, the String was kilometers of pure torture, an extremely narrow trail with a steep slope dropping off to the right the whole way. I automatically tend to dismount my bike to the right, which is bad news if there’s a cliff on your right. Since the 2012 trip to Morocco I’ve been working on dismounting on my left. I was about to find out if all my work had paid off.

In November, we went back to Morocco for another biking adventure. Seven people and seven bikes on one plane, and the stoke was high. 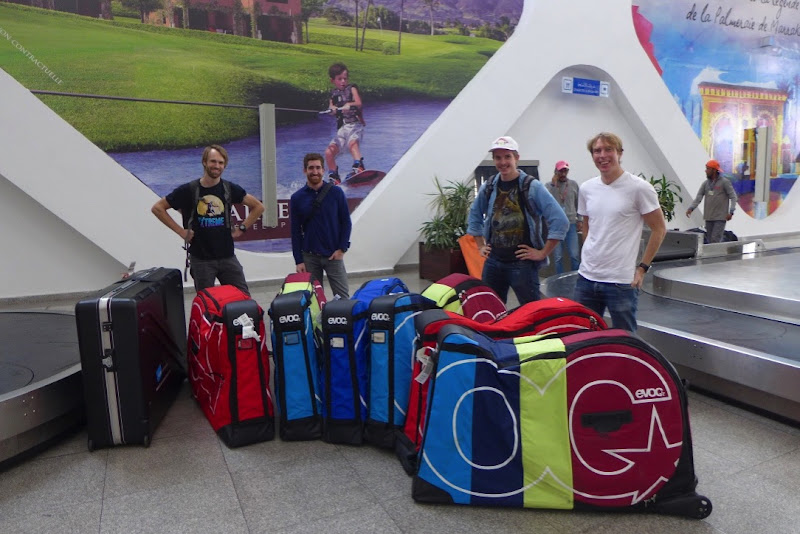 From the left, Audun, Tor Andreas, Alf Petter and David with the seven bike bags at Marrakech Airport.

On the first day, we woke up to pouring rain.  Everyone wanted to ride, but our guide Pierre Alain from Marrakech Bike Action, who has been riding in these mountains for 20 years, said no. It was simply too wet, and the mud was thick and would lock our wheels. Instead, we went for a tour of a local saffron factory... 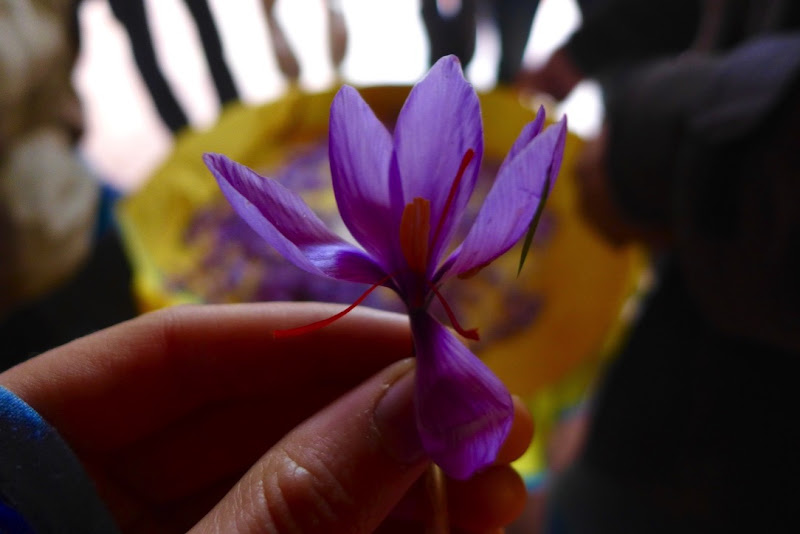 Saffron flower. The orange bits in the middle have to be plucked out (by hand), dried, and ground to make saffron. No wonder it’s so expensive!

…and for a hike around the village in the Ourika valley where we were staying. The rain had let up by the afternoon, but the ground was still muddy.

The gang looking over Ourika, including Austrians Andy and Hubert who rode with us some days.

The second day dawned grey but with no rain. I was itching to ride, feeling pent up despite the hike the day before. After a breakfast of white bread and Moroccan pancakes with honey and jam, and even some eggs (a rarity in these parts), we were ready to roll. Our van drove us high up into the mountains and we pedaled towards the Magic Carpet trail. The transport roads to the trail were muddy, but the majority of the trail was on dark shale that had absorbed the rainfall from the day before. Magic carpet indeed.

The trail brought us down through several Berber villages with houses built of clay. The houses seemed almost to have emerged organically, so well did they fit into the hillside. As I rode past Berber women in colorful headscarves, children scampering around their feet, I looked into their eyes and felt an uncomfortable lack of mutual understanding. The Berber villages in the Atlas mountains are a trip to the ways of yesteryear, and I can’t comprehend what a life limited to living in such a village, farming and raising children would be like. I am privileged to be educated, free to do essentially whatever I want and to have the means to jet off to anywhere in the world with my expensive mountain bike for fun. The gap in our life experiences is just so large. All I could do was smile, and mumble ‘As salam aleykum’, a respectful arabic greeting, and ride on. 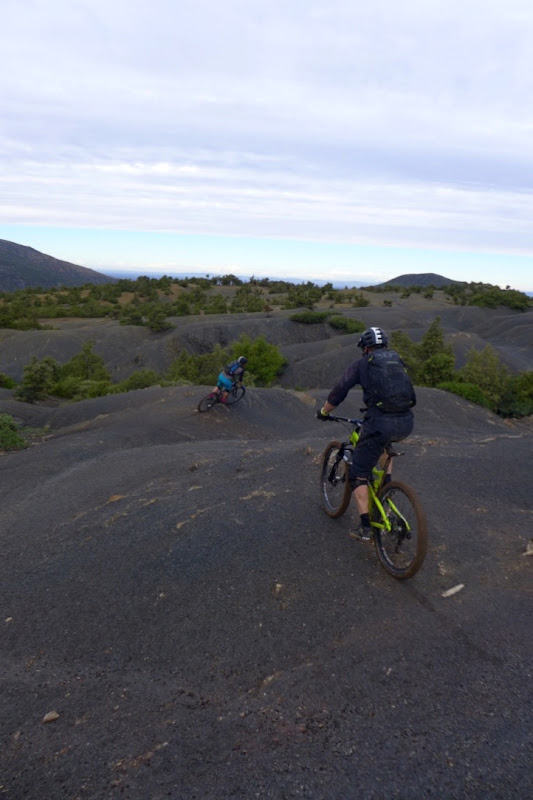 Alf Petter and Synne dropping in.

I was having a great day riding; all the pent up energy from the day before was working wonders for my guts. When I came to the top of a steep pitch, I squeezed my breaks and came uncomfortably to a stop. Often, I would just walk down these sections after having stopped, promising myself to try another time. But something came over me, and I decided to roll my bike back up the hill and give it a go. For once, my nerves were under control and I just let go and rolled down the steep pitch. It was incredibly liberating; I wish I could ride without fear like that more often. 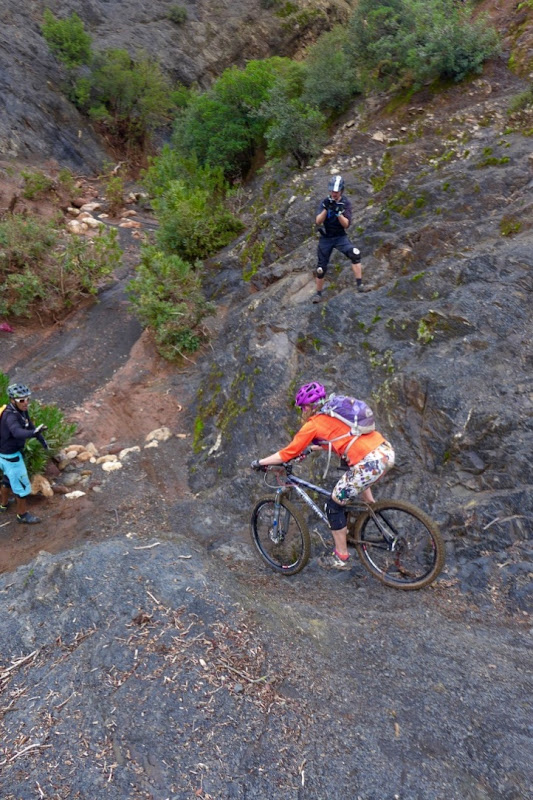 Me in action on the steep section of the Magic Carpet trail. Hassan, our guides, coaches me at the bottom of the hill while Alf Petter takes pictures. Photo by Audun.

In the afternoon, we rode another winding trail, this one more muddy than Magic Carpet. We frequently met villagers with donkeys heading home after selling and buying wares at weekly souks. Naturally, the donkeys were allowed the right of way. Donkeys are the most common mode of transport through the mountains were there are no roads, only narrow footpaths between villages. 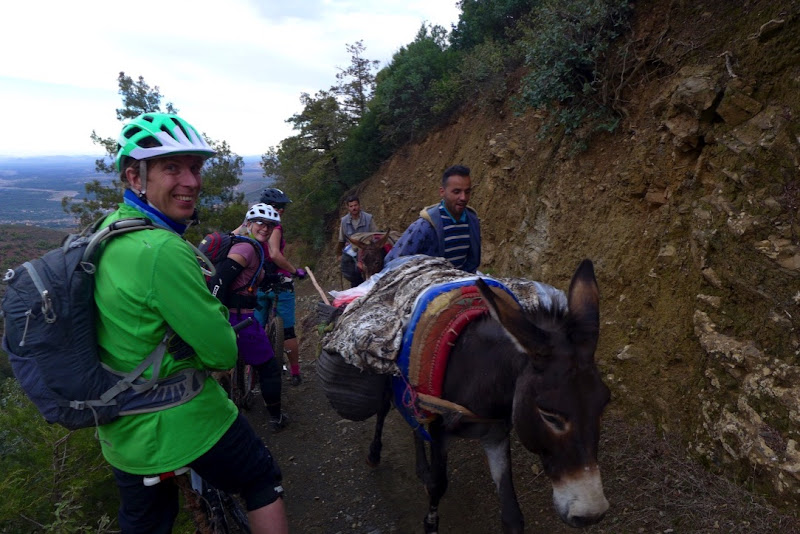 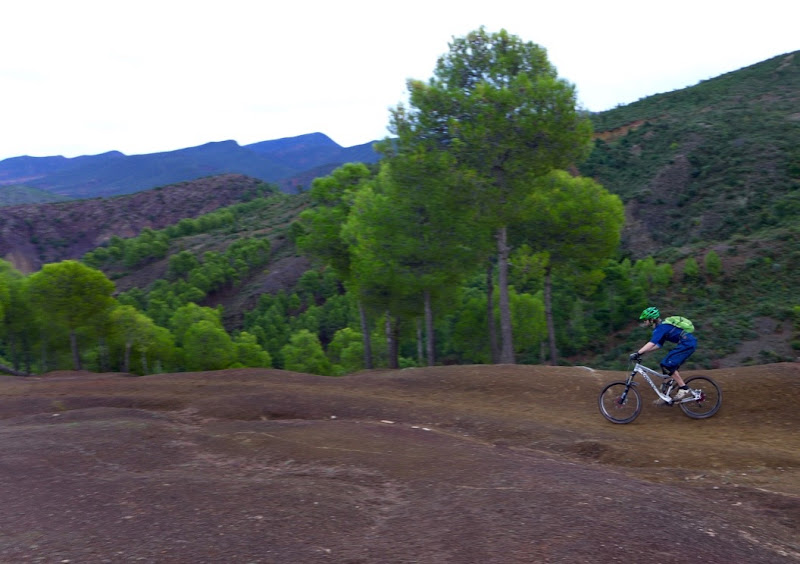 Audun zooms through the trees.

On the third day, the sun was finally shining, a welcome sight for us Norwegians who had come to Morocco for some warmth and sun. It had snowed in the High Atlas, and white towering peaks seemed to dominate the landscape we rode through, even at a distance. 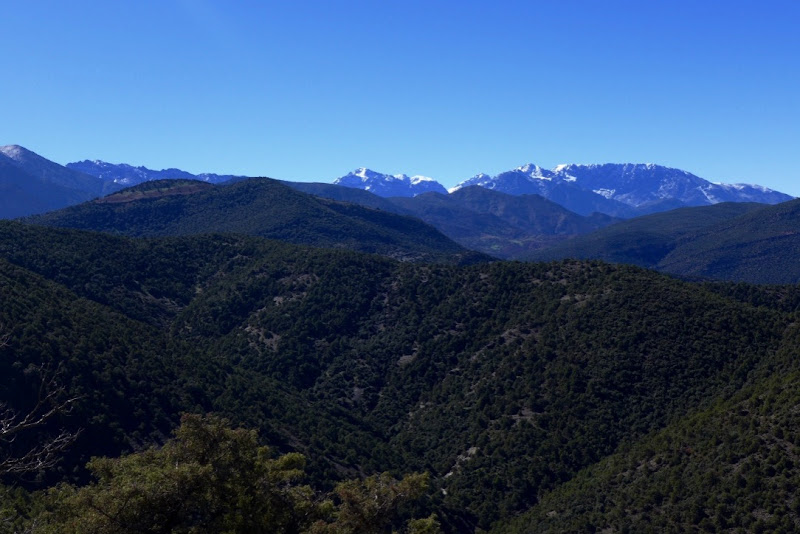 We started the morning with two trails know as Highway 65 and the Chameleon. The trails followed narrow, exposed balconies before dropping into tightly knit, twisted forests and swooping out onto open ridges. It was gorgeous, fun riding, but I couldn’t quite relax and enjoy it. Because in the afternoon, I knew, would be The String. 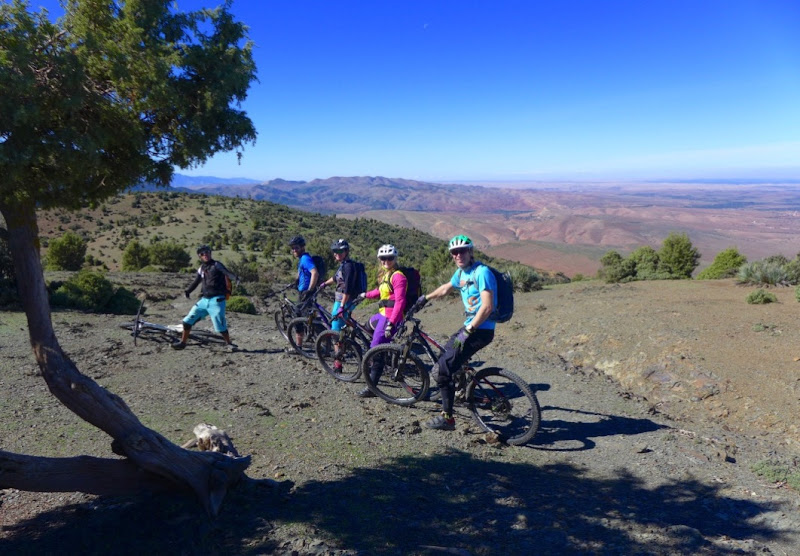 From left to right, Hassan, Thor Andreas, Synne, Vibeke and David pause on the Chameleon trail

After lunch, yet another round of delicious tagine, we pedaled off to ride the String. To say I was nervous was an understatement. I was terrified, scared I would choke again and embarrass myself. Afraid that three years later I would find no improvement. I tried to talk it down, telling Vibeke and David (who weren’t with us in Morocco last time) that it wasn’t really that big of a deal, that it was all in my head. It may have been all in my head, but it really got to me.

I just need to find a way to relax, I thought. And then I remembered my secret weapon: singing. I sang to keep my spirits up in the dark and snow on the way up Mount Kilimanjaro in 2010 (before this blog). I sang at Nordmarka Skogsmaraton after 35 km when everything hurt and I wanted to keep running. I have sung countless times in fear, fatigue and elation. So I sang to myself as I pedaled onto the String, and it worked (as it always does).

Shockingly, The String was not death-defying, and it was not the instrument of torture I remembered it. Actually, apart from the steep hillside on the right, it was kind of…easy. It feels silly to even write that, but it’s kind of true. Some things get easier with practice, and riding on exposed, steep hillsides is definitely one of them. 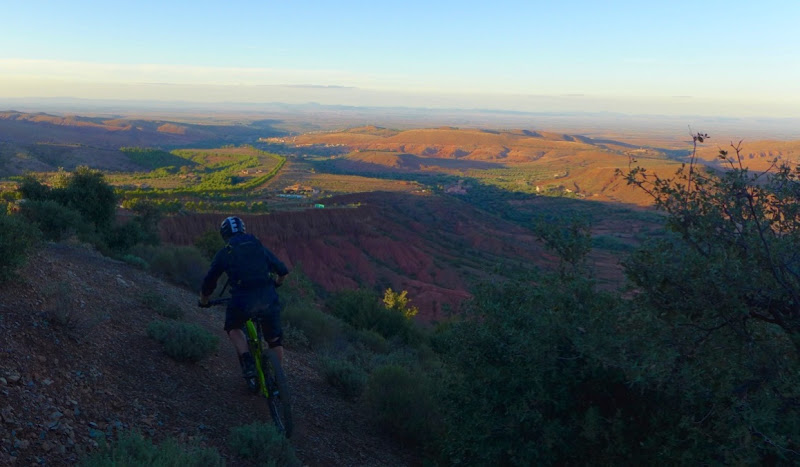 Alf Petter at the end of the String, heading down to Terre d'Amanar

At Terre d’Amanar Ecolodge that evening, we sat around a campfire and I revelled in my success. The velvety night sky was speckled with stars that seemed to reflect the glittering lights of the city of Marrakech in the distance, all in honor of my triumph over the String. 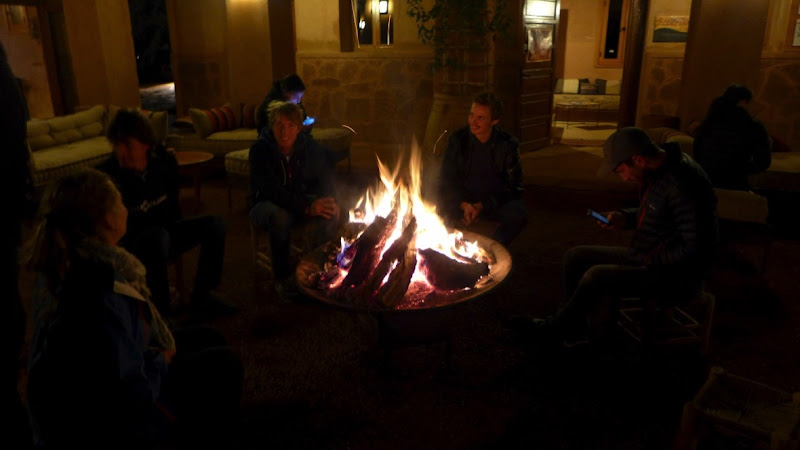 The campfire at Terre d’Amanar

The next day we rode up a mountain, and down the open mountain side with no trail. It was cool to be able to pick your own line and ride wherever you wanted to, just like skiing, but the hillsides were steep and ofter filled with loose rocks and I grew tired and frustrated. It was hot, so hot, and my hands hurt from breaking. Whine, whine, whine.

The gang on top of the nameless peak we conquered.

That afternoon I snapped. I was hot and tired and I felt like I couldn’t ride anything at all. I would point my bike in one direction and try to ride a line, only to have it seemingly disobey me and go in a different direction. I wondered riding the String was all I was capable of, if I had spent too much energy worrying about it and had none left for new challenges.

It’s amazing what a night’s sleep can do. If I could tell the "worried Molly" one thing, it would be to relax and trust that you can do this. Fresh from a great night’s sleep, we set out to ride B62, so named because the trail contained no less than 62 switchbacks. I didn’t expected to be able to ride all of the switchbacks, and I wasn’t able to, but I had fun trying all the same. I counted the switchbacks I was able to ride instead of thinking about the ones I wasn’t able to manage, the ‘glass-half-full’ approach. 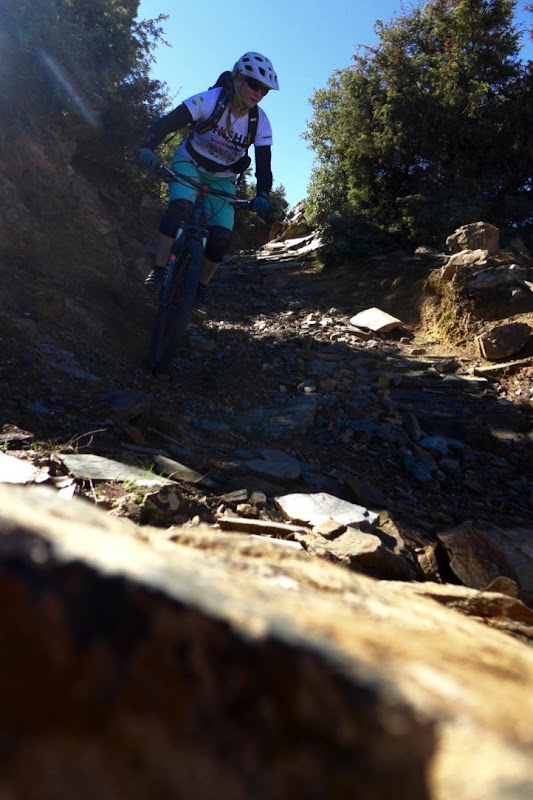 Vibeke heads into a switchback.

In the afternoon, we were shuttled up to ride a new trail that the guides had just established. We decided to name the trail ‘Le cheval est en colère’, which is French for ‘The horse is angry’. The backstory for this is that Alf Petter speaks very limited French, but he knows this one phrase and would go around saying it. Our guides, Pierre Alain and Hassan, are both native speakers and found this hilarious. So they said that’s what they would call the trail. It remains to be seen if the trail name stuck!

Le cheval est en colère was hands down my favorite trail of the trip. Everything was rideable, but just technical enough to be interesting. I felt like I was rippin’, even though I was still basically the slowest rider in our group. 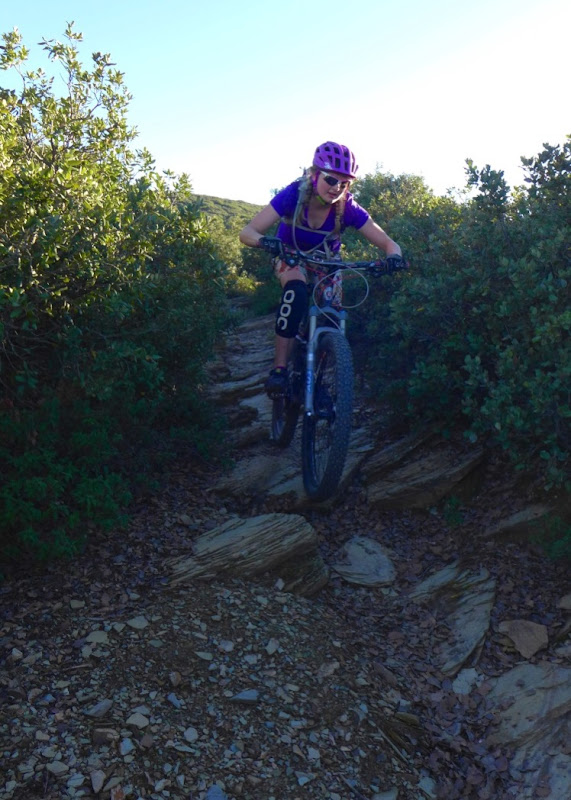 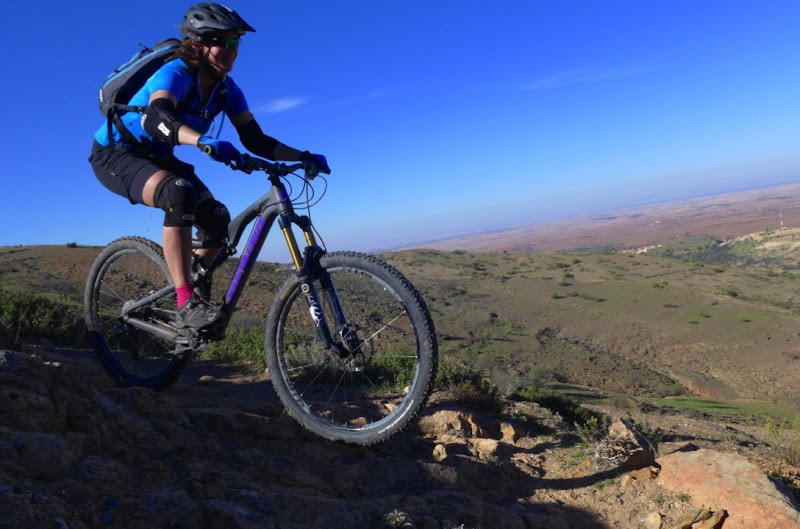 And we got to ride it twice! The second time around I rode even faster, but we had several stops because of punctures. Guess people were getting tired and careless after all the downhill riding that day! 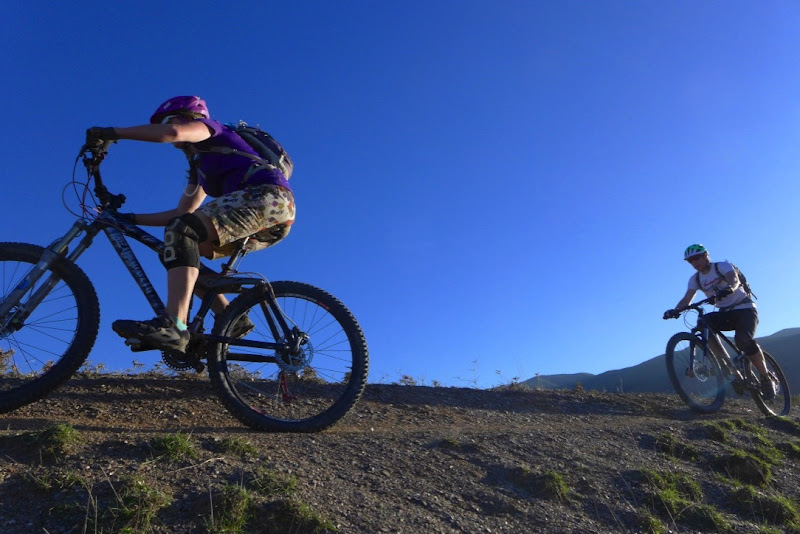 Me and David on the second round of Le cheval est en colère.

On our last day of riding I was tired, so tired and hot. The sun beat down relentlessly, and I felt like I was just fumbling around and loosing my balance all over the place. It was time for a rest. The High Atlas mountains glittered with the remains of the snowfall, waving goodbye as we rode away from them. 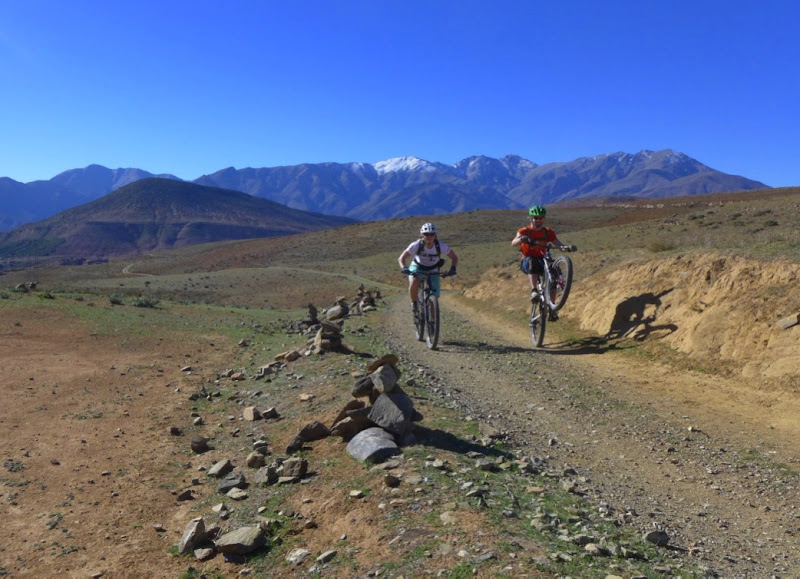 Vibeke and Audun on the last day of riding.

We spent our final afternoon in Morocco in Marrakech, and toured the Majorelle gardens. I fell in love with the bright blue color of all of the buildings, which is the signature of the gardens and is called Majorelle blue. 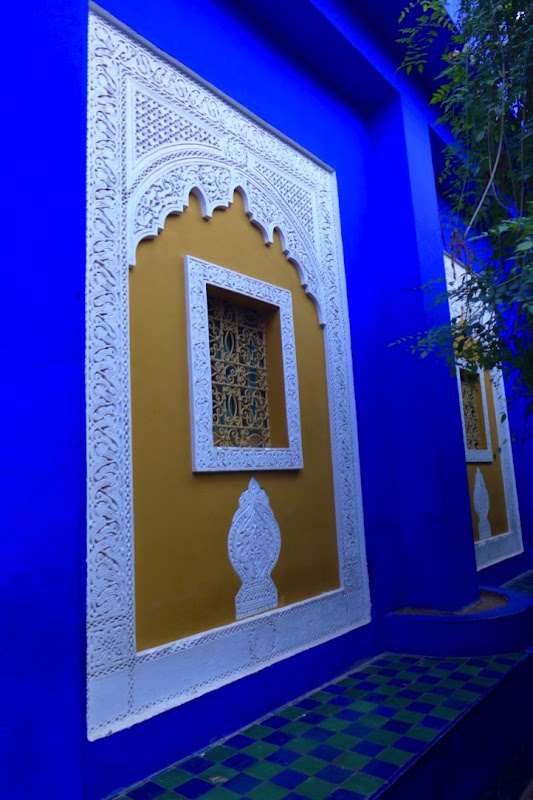 Marjorelle blue buildings with gorgeous details in the gardens in Marrakech.

The next morning we had time for a traditional Moroccan spa treatment, a hammam, before heading to the airport for our flight home. It had been a beautiful, challenging week, and it was time to go back to the real world.