Holmenkollstafetten (“the Holmenkoll Relay”) is the largest relay race in the world. It is a pure celebration of running, a day when everyone in Oslo seems to either be running a leg or two, or cheering on friends and family, or both. The relay has 15 legs, varying in length from 600 meters to almost 3 km. Holmenkollstafetten is truly special in the degree that it includes runners of all abilities. The best teams are elite runners. Many companies typically also race as a team, with notorious rivalries between the large consulting firms.
Last year, I raced two legs of Holmenkollstafetten on the team of the research institute where I was writing my master’s degree. Then someone told me that you could sign up for the whole relay alone, and it was settled. At 18.7 km total, the Holmenkollstafetten provided a great opportunity to check out my shape towards Nordmarka Skogsmaraton. Besides, when someone asks you what leg you ran, nothing beats saying, “All of them!"
I had a hard run on Wednesday, and given that the race was on Saturday, I wasn’t extremely well rested. There is also a big hill in Holmenkollstafetten (up to Holmenkollen!), and so I tried to set my expectations accordingly. I hoped to finish in around 1:45, and I made a pacing strategy for the different sections of the race: first flat, then hilly, then mostly downhill for the last half. 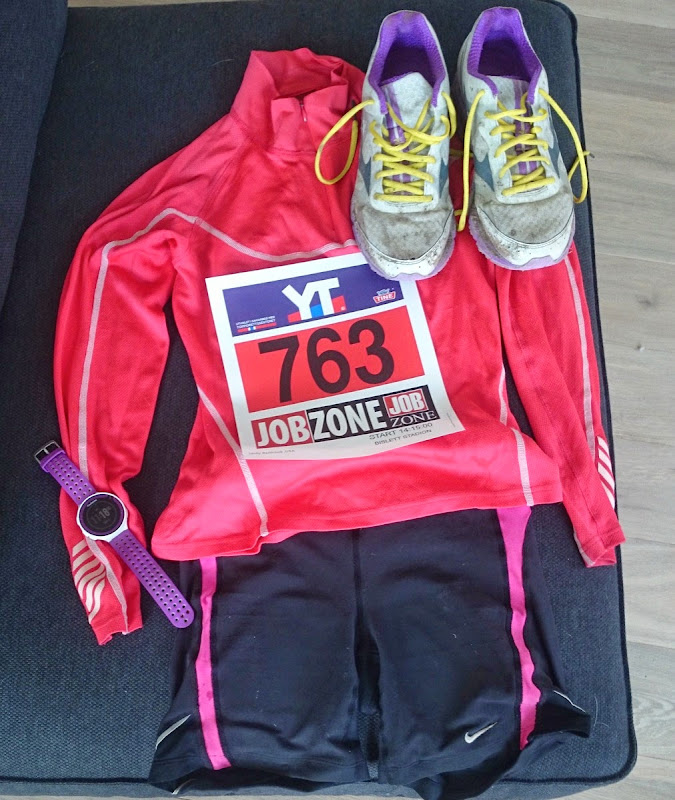 The obligatory ‘what-I-wore’ photo. Trusty Mizuno Wave Rider 17’s, Garmin Forerunner 220, Helly Hansen long-sleeved shirt and old Lycra Nike shorts. The red bib means I’m running in the singles class.
Holmenkollstafetten starts at Bislett Stadium, the fabled host of thee 1952 Olympic Games, renovated in 2005 to meet modern standards. It is an enormous, formidable track. The race starts in many waves, as there are around 3000 teams racing. The ‘single’ class starts right after the elite women and just before the elite men. I spent 20 minutes warm-up on the indoor track before heading onto the field to watch the fast women start. 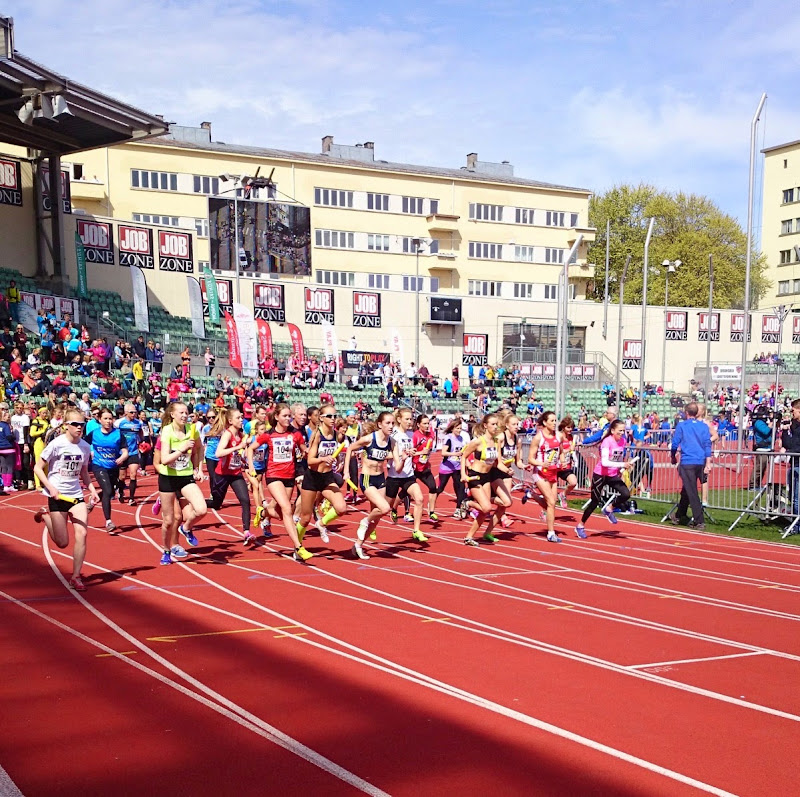 This is what fast looks like!
Just 10 minutes later I was toeing the line that the elite women had just sped off from. Strange, I thought, how nervous I had been earlier in the day. I had paced around, checked the weather, obsessed about how much and what to eat, and here I was and all I could think was Let’s do this. 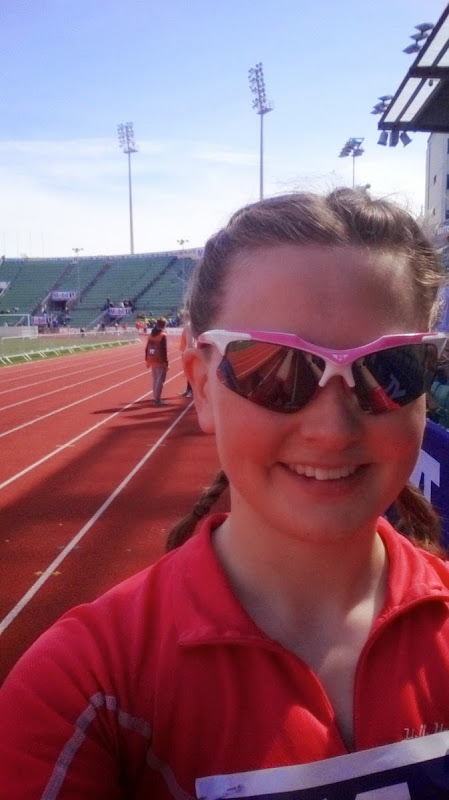 Pre-race selfie. The important thing, as we all know, is to have fast-looking shades.
I started towards the back of the pack. I would rather start too slow and be able catch people at the end. The first kilometer or so was a blur of red track, three laps, passing a couple of people and finally locking in on a woman who was going just about the right speed. By the time we exited the stadium, the lead pack was out of sight.
Outside, the streets of Oslo were crawling with people. I settled into a comfortably hard pace, and started people watching. A few minutes later, I glanced at my watch and was startled at how high my heart rate was. This couldn’t possibly be sustainably for 18+ kilometers?! I thought about slowing down, but my legs were very happy at the pace they were going. Well, I thought, you will pay if you blow up in 5 k!
Just before the University, the most of the elite men blew by me. It was pretty awesome to watch. Lanky men, booking it as hard as the could, arms pumping, one hand clutching their relay baton. 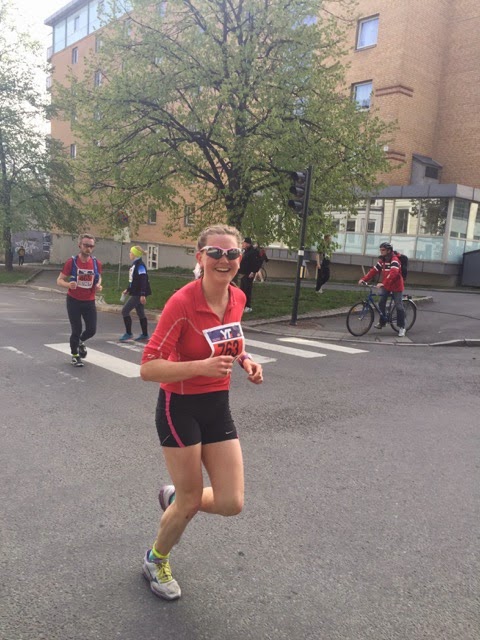 Smile for the camera. Photo by Synne
The course weaved back and forth, doing small rollers, until I barely knew where I was. (Not that I can claim to know Oslo particularly well, with the exception of the forest!) I was parched, and keep a sharp eye open for the aid station. A good thing too - it was hidden behind a mass of people waiting at an exchange! I thankfully grabbed a glass of water, although I found myself wishing that they offered something with a little sugar. Maybe I should have stuck a gel in my shorts?
I kept thinking that there would be big hills soon, and my pace would have to drop. The ‘big hills' never came, and all of a sudden I was at the base of Besserud. Besserud the leg of the relay notorious for being the most difficult, and is the place where most teams place their best runners. It is a big, relentless hill, but luckily that was one of the legs I ran last year, so I was familiar with this particular animal.
Just like bicycling, I thought, Just get into your low gear and pedal slowly up the hill. A little ways up the hill, I saw Audun warming up and waved. (He, of course, would be running Bessrud for his company). He jogged over and ran next to me for a few hundred meters, encouraging me: “You’ve got this! Good job!” After passing seeing so many people with their own cheerleading squads in the form of family or friends, I was glad to finally find mine. 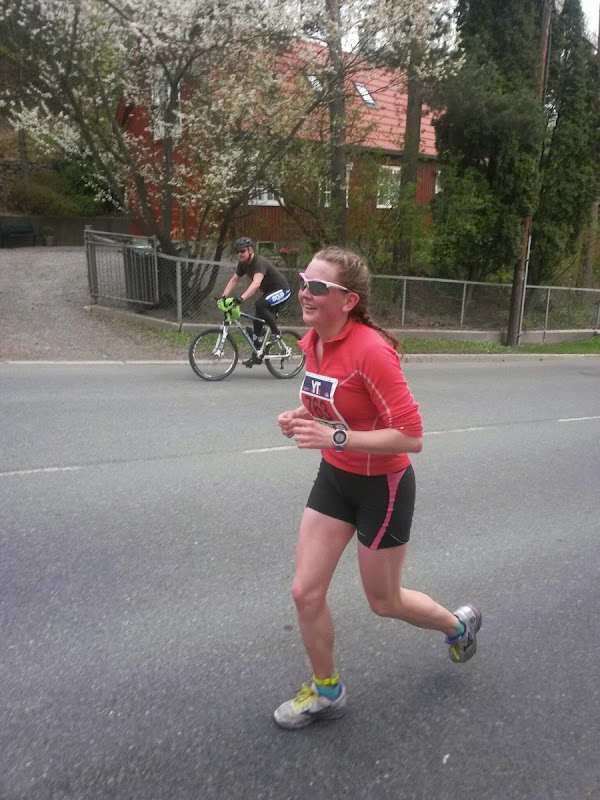 Up Besserud, bright red face to match my shirt.
There was a flat part, and then more hill, and then all of a sudden I was at the top, home free! It was all downhill from here. I was excited and hit the first stretch of steep downhill too fast, before I reigned it back. At the next relay exchange I saw my friend David, and I got another personal cheerleader.
The was a long, boring stretch with nearly no people, and then I started to look at my watch, realizing how fast I was really going. If I can just run the last 5 k in 25 minutes, I calculated, I can finish in 1:35 - a full 10 minutes faster than my goal! So with 5 kilometers left I started to monitor my pace more closely, and everything started to hurt. There was a moderate uphill, and my pace rose to above 5:10 /km - too slow! But I kept going strong, and reigned in the seconds. With 2 kilometers to go, I knocked it up one more gear, and started to pass a few people with the telltale red numbers (people running in my category!). My slower pace at the beginning of the race was finally paying off.
All of a sudden I rounded a corner and enter Bislett stadium again, ready for one final lap (as punishment? I found myself thinking). I had been going hard for a long time now, and I wanted to get this over with. I passed one more guy in the singles category before sprinting for the finish. 1:35:15. I felt so fast, like a superhero!
The prize for finishing all of the relay legs alone was this shiny plaque: 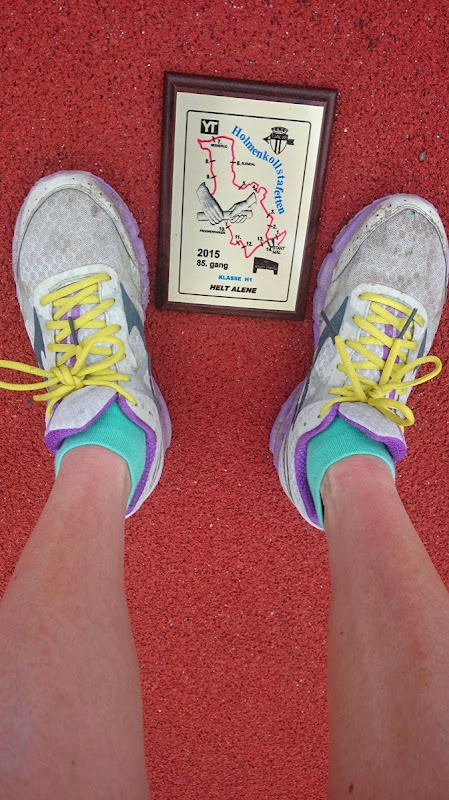 If that was a test of how my training is going, I would say I passed with flying colors. Nordmarka Skogsmarathon, here I come - only 5 weeks to go!
Strava data here
- The Wild Bazilchuk
Labels: oslo races running