It’s hard when your sitting in the city, watching the rain pour down outside, to decide whether that 4 hour drive to the mountains will be worth it. Will there really be snow there? Or are the powder day pictures on your Facebook feed all an illusion?

Inevitably, curiosity wins over laziness, and I find myself in a car for my whole Friday evening again, crossing my fingers and hoping.

In early February, Audun and I met our friends Vibeke and David in Isfjorden, Romsdalen, one of my hands-down favorite places in the world for ski mountaineering. Audun and I rolled in to agreed-upon campsite in Grøvdalen late and set up camp. Vibeke and David, driving up from Oslo, rolled in even later even later. Saturday morning dawned grey and misty, and my optimism dwindled. We got a slow start, so by the time we rolled into the parking lot the weather had started to clear off.

I changed into my boots, packed up the last bits of my pack, and got ready to click into my skis and settle into a steady, uphill rhythm. That was when I realized that the store had put the wrong size of my new NTN bindings on my skis. The bindings were hopelessly large; there was no way I could use my skis. I was, to say the least, devastated. Not only had we driven 5 hours to Romsdalen, but I had been looking forward to using my new boots and bindings since I bought them in early January!

Luck was on my side. David had just purchased new skis, but had brought his old skis just in case something was wrong with the new ones. A complicated exchange ensued, and I wound up borrowing Audun’s enormous Icelantic Keepers, which are nearly 30 cm longer than my skis (Icelantic Nomad). His boots were two sizes too big, but I put on extra socks. I would go skiing!

It was nearly lunch time by the time the ski situation was sorted out and we headed up Galtåtind. 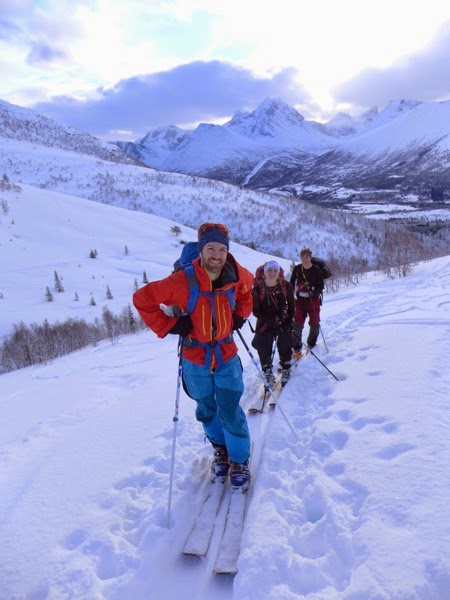 At the start of the ascent, Store Venjetind reigns supreme in the background.

The snow was surprising light and fluffy as we headed up onto the main face of Galtåtind. The shy February sunlight radiated from across the valley, illuminating the surrounding mountains. That feeling of being a tiny ant-skier, climbing among spiky mountains, was enough to make the long drive worth it.

Due to our late start, we arrived on top of Galtåtind in the late afternoon, and discarded the original idea of doing a traverse across the ridge to Loftskardtind.

Audun, David and Vibeke on the top of Galtåtind, the ridge to Loftskardtind on the left and Klauva on the right.

The descent wasn’t too shabby either, although I struggled with cramps from the too big, aggressive boots. 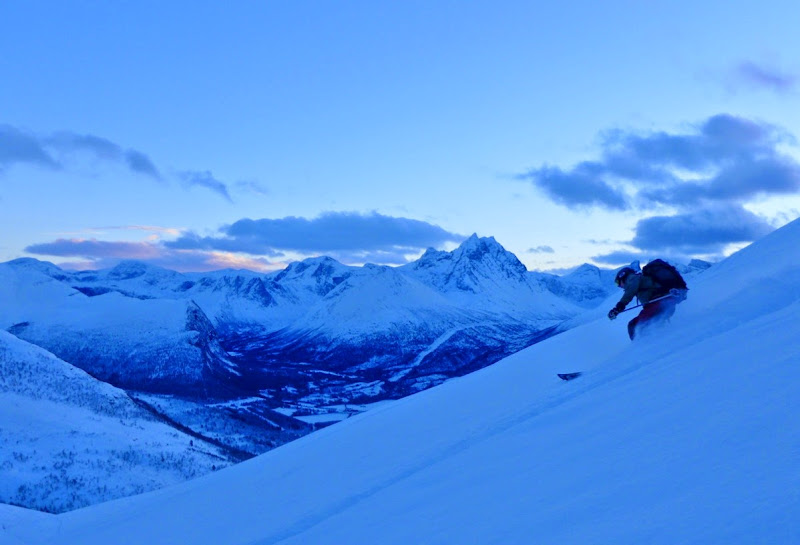 We spent a magical evening in our little tent camp in Grøvdalen, digging a nice snow pit to sit in, attempting (and failing!) to build a campfire with ridiculously wet wood and cooking the best pasta ever. All food tastes better when eaten under in the stars. Evening snow forced us into our tents early, and I slept like a log for nearly 12 hours. 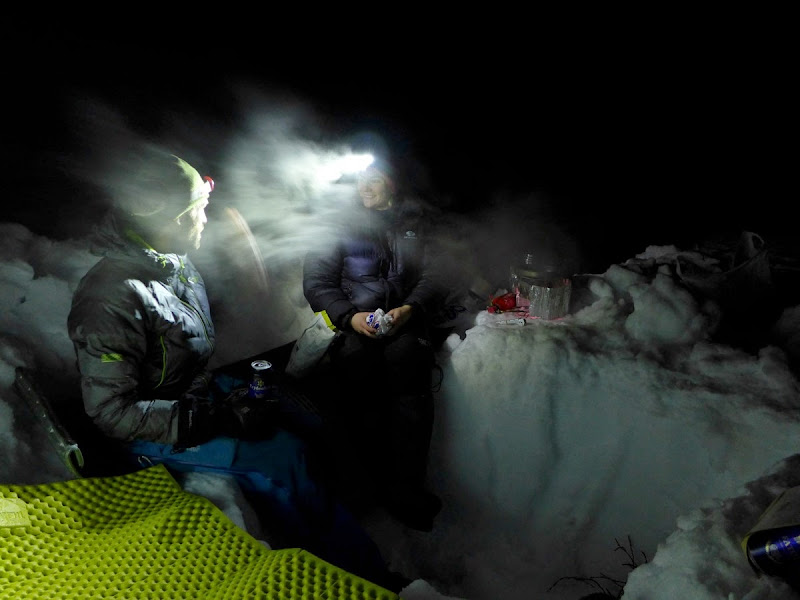 Campsite cooking - the smoke in the headlamps is steam from the boiling pasta!

The sun rose pink the next morning, illuminating the massive slope up towards Gjuratind behind our camp. 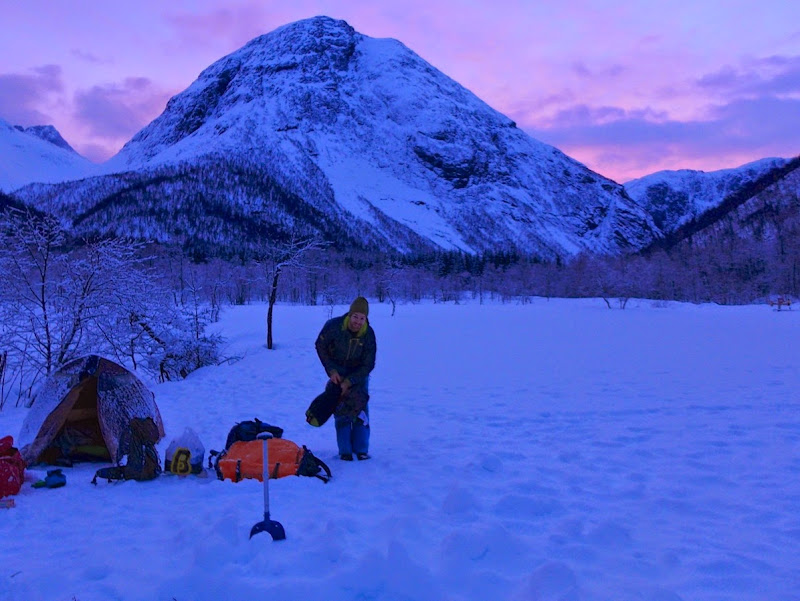 Audun packing up in the sunrise. Which isn’t super early in February in Norway.

We rounded off the weekend with a windy ski up Smørbotntind, a Sunday classic because of its short, fairly uncomplicated nature. 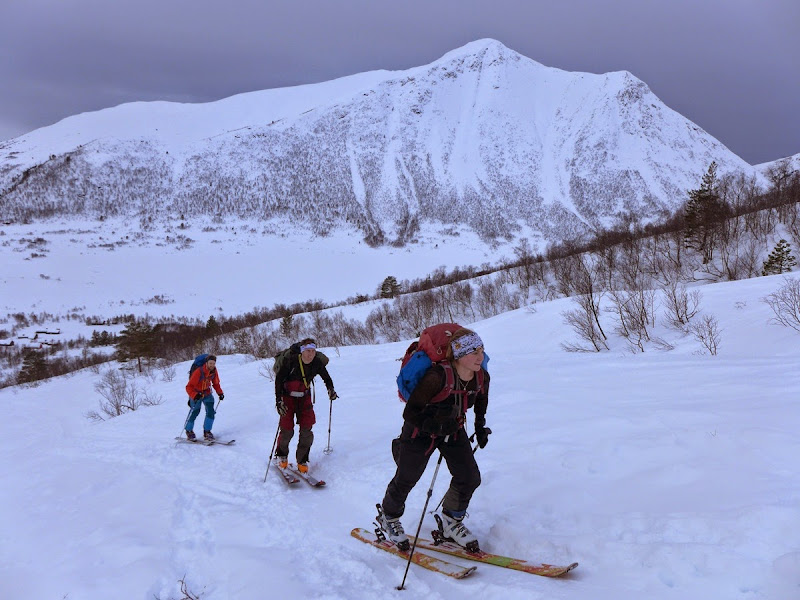 Thank you, Romsdalen. I’ll be seeing you again.

Ski optimism struck again when we drove to Øksendalen a few weeks ago. Hurricane Ole had passed through Norway, dumping a bunch of wet snow everywhere before the temperature abruptly rose to well above freezing (seriously, I was out cross-country skiing Sunday at the tail end of Ole, when the temperature transitioned from around -5 C to +5 C in the space of the two hours we were out!). Enormous wet avalanches had been triggered by the weather, although the avalanche danger had decreased as the weather cooled off again.

Still, we expected to be skiing on hard packed ice. We clung to the hope that the (hopefully not too) light snowfall on Thursday and Friday would soften the conditions slightly. The weather forecast, after all, was for beautiful, sunny weather, so even if the conditions were crappy we could enjoy the sun! 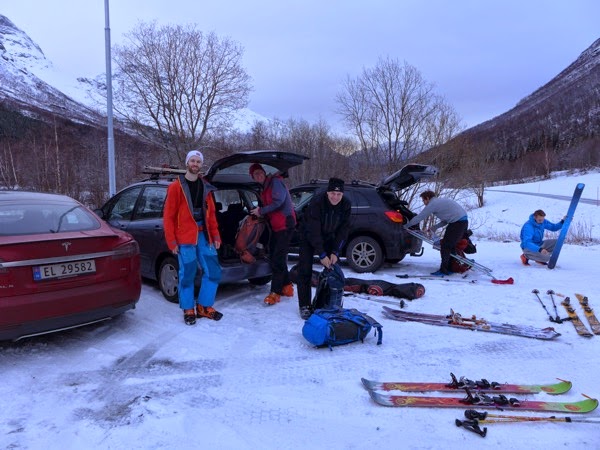 Audun, Dad, Odd Arild (Audun’s dad) and I headed up Fløtatind at around 10 am Saturday morning after an hour drive from Tingvoll. The snow was rotten and non-existent in certain places through the forest, and we had to take our skis off for a couple river crossings. 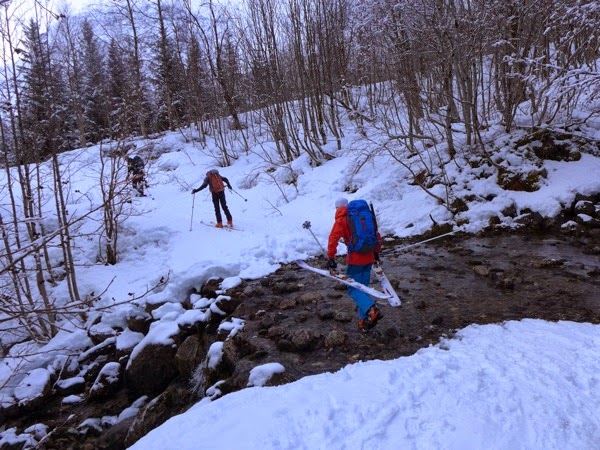 Exhibit A: crossing a river. Can this really be winter in Norway?

As we passed above treeline, we started to get the conditions we had prayed for. The hard layer formed during the thaw cycle wasn’t all ice, and there was 10 cm of fluffy new snow on top. The weather seemed to be determined to do the exact opposite of what the forecast had told it to. The clouds came in, it started snowing, and we could barely see the mountains around us. So much for soaking in the sun! 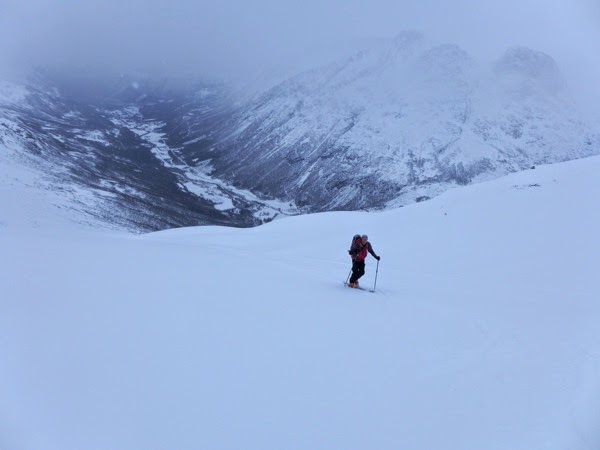 Dad on the ascent, clouds shrouding the mountains and Øksendalen spread out below us.

When we came on to the main face of the peak, the light was so bad we couldn’t judge the steepness of the slope, and we ended up on a steeper aspect than we intended to. On this face, the fresh snow was slipping a bit on the icy hard pack below, making it difficult to pack down a good skin track. After a quick discussion, Odd Arild decided to turn, while Audun, Dad and I strapped our skis on our packs, stepped into our crampons, and headed straight up. 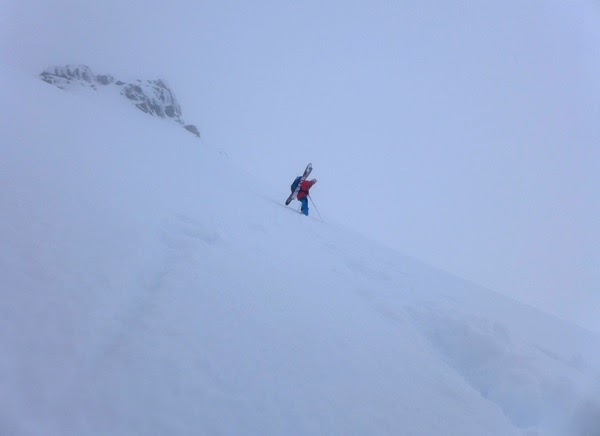 Audun booting up towards the top of Fløtatind

This turned out to be a great decision, and the final hundred-odd meters of vertical just flew by. We reached the base of a steep outcropping of rocks, somewhere on top of which the top must be. There was no obvious way up, and we thought our adventure might end there until we skirted around the outcropping and saw a steep couloir. There was a solid cornice on top of it, but it wasn’t overhanging, and there was a tiny hole to squeeze through on the side. So we got our ice axes out, and went for it. 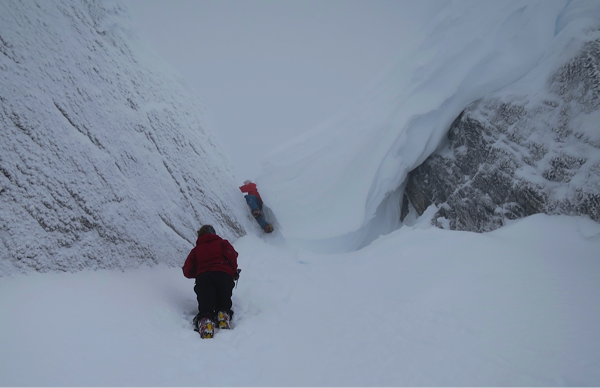 Audun between a rock and a cornice, with me in the foreground waiting my turn.

And low and behold! The top was right there! Hilariously, just as we popped up on the ridge, a group of skiers who had been ahead of us all day appeared, booting it up the ridge. They had traversed all the way around, where as we had gone straight up. 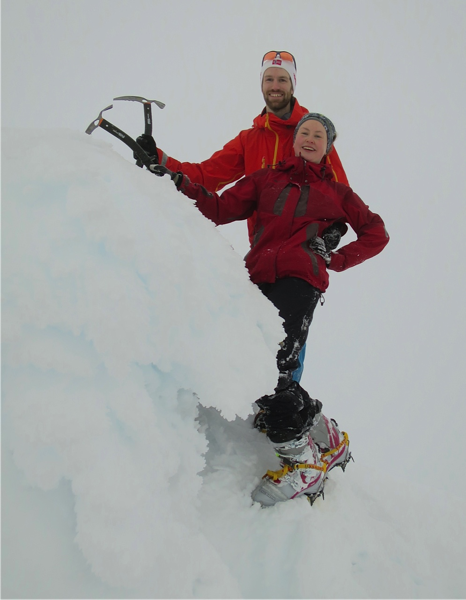 Audun and I with the frozen summit cairn

We descended through our icing hole and back down our couloir like groundhogs, to the amusement of the other group of skiers. And just as we clicked into our skis, the clouds lifted, just a tiny bit. Just enough to make the ski down really, really fun. 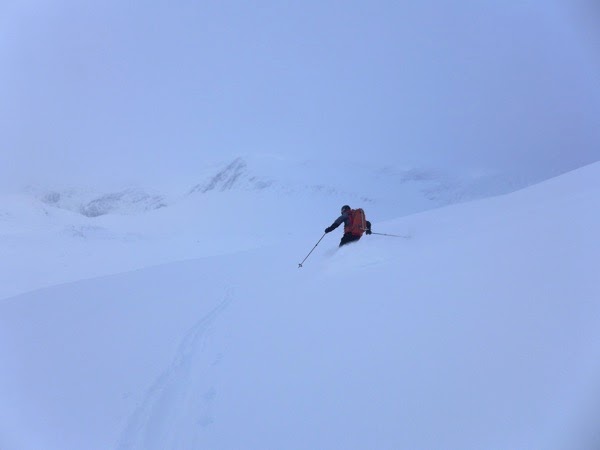 Dad on the descent, the clouds just starting to lift. 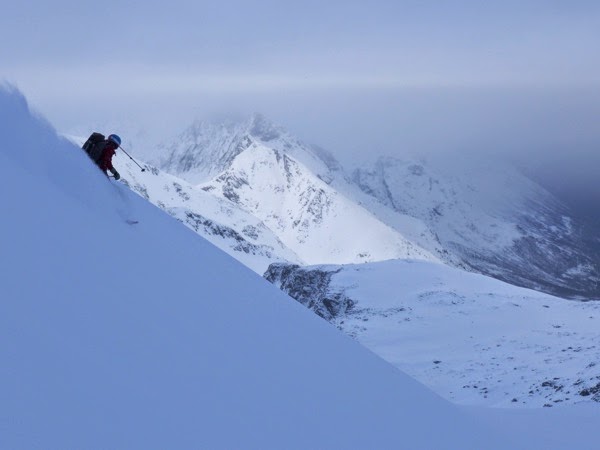 Me on the descent.

Below treeline, descent through the forest was all tight, twisty turns on wet snow. As we reached the base of the mountain, a tiny stripe of sunlight appeared on Skrondalsnebba across the valley. 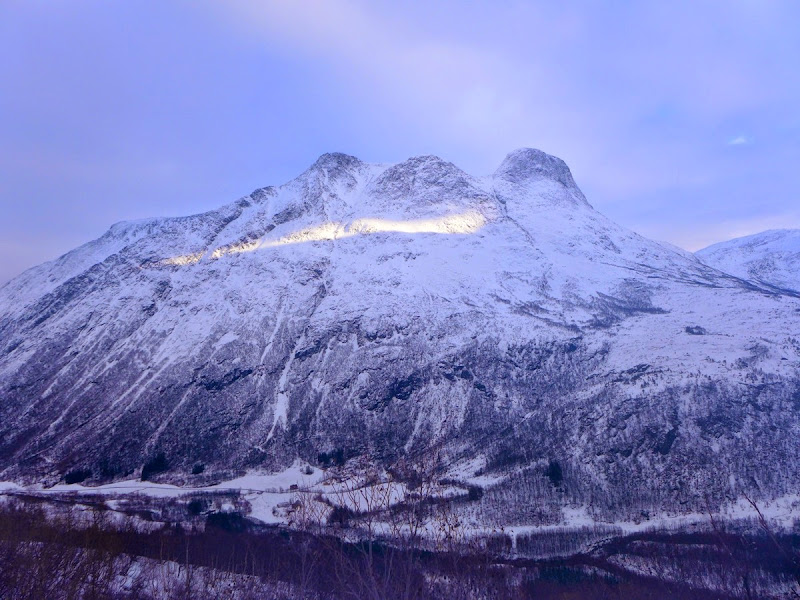 Thanks, Øksendalen, I thought, I’ll be back.