Steve Peat and me: seven days on Costa del Sol

Every fall, as the dark starts to sink in Norway and the forest trails grow increasingly wet and slippery, a group of my friends travels south to warmer trails and guided enduro biking for a week. This year, we choose Fuengirola, Spain, an unashamed haven of everything that is beach vacations in Spain. Walking around the streets of the touristy town, I always felt like I had to defend my presence. This isn’t me! I wanted to shout. I don’t do beaches. I do mountains.

And mountains we did. Our team of two guides, Simon and James from Sierra MTB, took us all over the mountains above Fuengirola and Malàga, away from the masses of white flesh rolling under parsols on the sunny beaches. 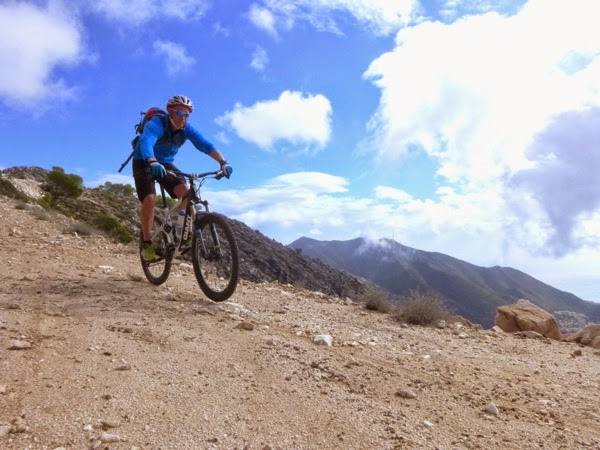 Simon on a fireroad in the Sierra Mijas.

Our first day in Fuengirola brought pouring rain, not what we were expecting from Costa del Sol. We dutifully loaded our bikes into the van and got in, hoping that it would clear off as we drove up. It didn’t. By the time we reached the trailhead for the day’s ride it was raining so hard we could barely see the landscape around us. Looking out doubtfully at each other, AP finally voiced what everyone was thinking. “We’re here to have fun. Maybe we should got find somewhere to hang out until the rain lets up.” So we went for a coffee, in which time the rain only let up slightly.

On the way up, Simon, the guide who was driving, talked to AP about how challenging the trails were. “It’s really steep here,” he emphasized, “And there are lots of sharp rocks and switchbacks, and prickly bushes you get stuck in if you fall.” I was already worried about the level of riding. I’m the worst rider in the group, and I’m always afraid that they’ll be laughing down trails that I’m terrified of. The anticipation of biking in new territory, combined with Simon insistence that biking here was dangerous and difficult drove me over the edge, and I started to think that this mountain biking thing was a bad idea. I started crying and saying something to Audun about selling my bike and going home.

Seeing that he had scared me, Simon then explained that he was used to cocky young guys showing up, thinking they were going to bomb down everything, and getting injured on the first day. I’m just the opposite of that - I need to be motivated, not warned. We finally got riding, and it wasn’t as bad as Simon had described. It was awfully muddy, though, although it gradually cleared off as we road. 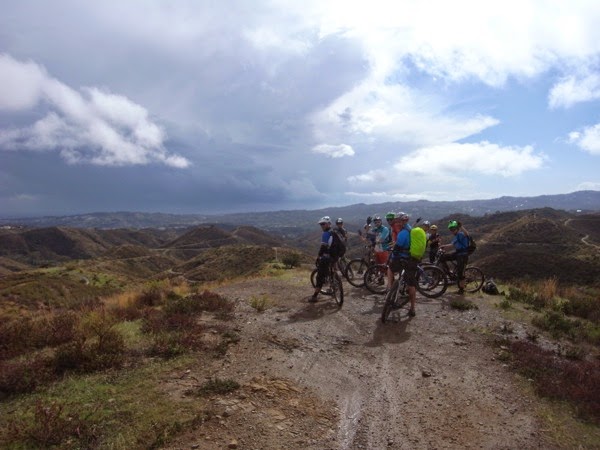 Clearing skys on the first day

The ride was mostly wide, rocky, loose trails, and I felt rather successful, given that I was planning to give up biking a few hours before. We were joined by an older, but suprisingly spry, English chap named Neil during the last half of the day. I biked with him, enjoy someone that was as slow as me, even if he was old enough to be my grandfather.

Sierra MTB provided a whole vacation house for us seven Norwegians to use, complete with a pool. Back at the house, we had to wash all of the clothes we wore and spent a considerable amount of time clean mud out of our bikes. That wet day was the benchmark for the rest of the trip, and it was all uphill from there as the trails dried out during the rest of the week.

The second day brought us up to the telecom towers above Fuengirola, down a rocky, loose piece of singletrack that the guides called Full Telecom. There was yet another addition to our group - Mike, an American from rural Virginia who lived in Kazakstan, working in the oil industry. He was on vacation with his family, but joined us for a couple days of fun.

After Telecom, we biked San Anton, a nice, fast piece of singletrack with some more technical shoots in the foothills down to Fuengirola. We had done it the day before, and it was so fun we decided to race it, staggering  our starts and chasing each other down the trail. 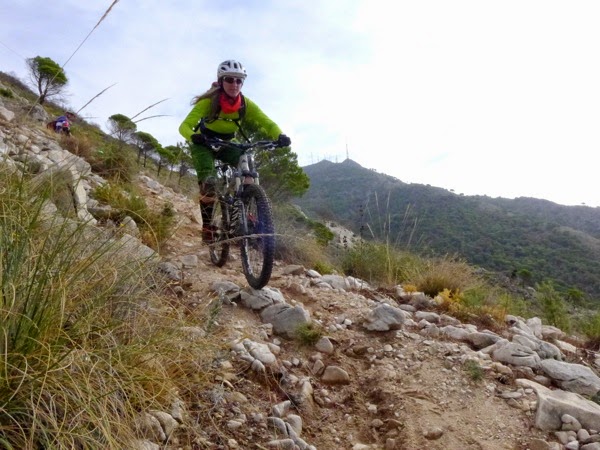 Ingvild on the second part of the Telecom trail.

We quickly relaxed into the rhythm of being on a bike trip. A full English breakfast cooked by our hosts at 9, ready to bike by 10, and riding until somewhere between 3 and 5 pm. Every ride brought us back to the coast, and lead us to the obligatory ice cream stop at the Helateria where we quickly became regulars (it was called 900 if you are looking for good gelato in Fuengirola!). 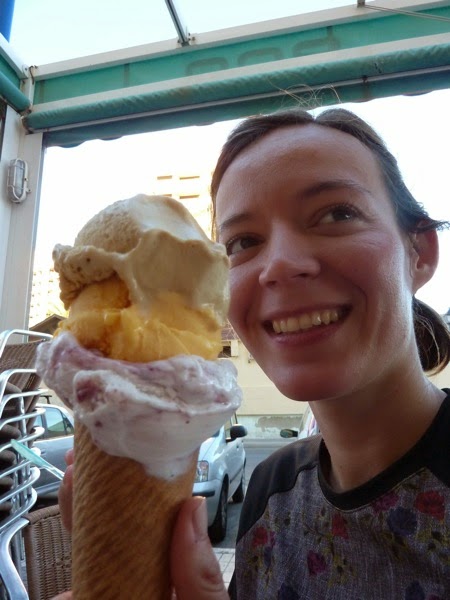 Synne enjoys an enormous ice cream after a good day of riding.

In the evenings we would wander around in the touristy center of Fuengirola until we found a place to eat. Our best meal was probably the first night, when we ended up at a pretty authentic tapas place, Charolais. 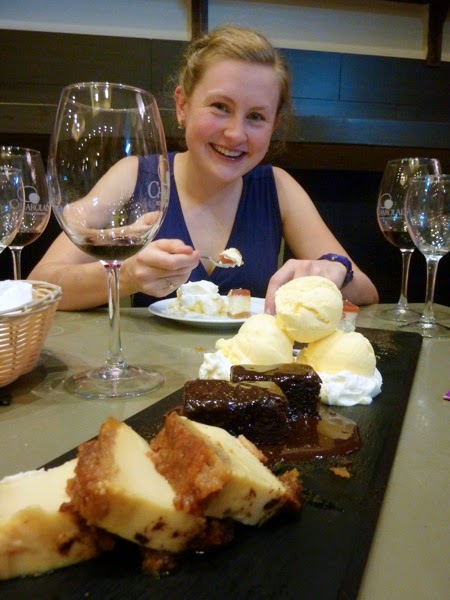 I don’t mean to brag, but the boys I travel with - Audun, AP, Øyvind and Mats - are pretty exceptional bikers. It’s always fun when the guide goes, “Oh, well, no one bikes down this part,” and then they do it anyway. On such place was this set of stairs, on a trail called Johnny’s trail after the guide who found it. Øyvind concentrated on making it down the treacherous (to my mind) set of stairs.

The stairs we treacherously steep and surrounded by the aforementioned prickly bushes. Worst of all, they end it a sharp switchback which I probably couldn’t clear without the stairs in the way. 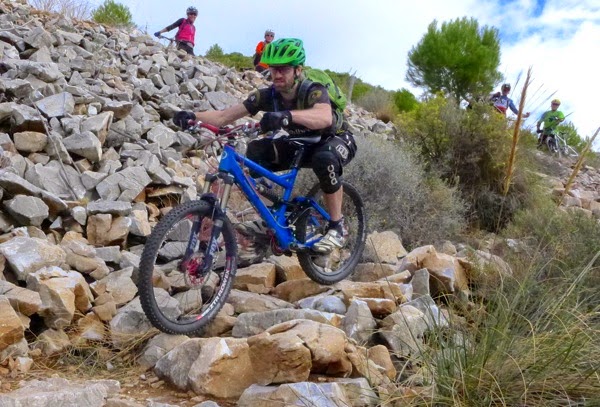 Audun nearly sits on his back wheel.

Johnny’s trail ended with a series of short stairs through dirt-packed forest trails. I was in the back, and I couldn’t decide if the stairs would get steeper, or if they were slippery. As a consequence, I keep braking to see what would happen and would loose so much momentum I would stop. My only triumph was rolling down the rocky stairs at the end of the descent - while everyone was watching. 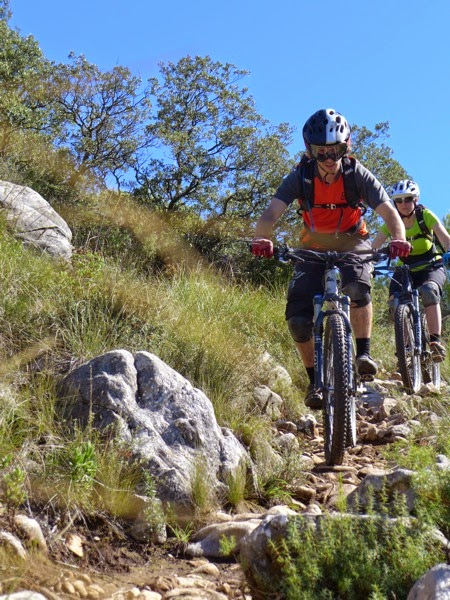 Øyvind and Ingvild hit the rocks.

All of the descents brought us all the way down to the coast, but only after biking one of the two routes through the foothills of the mountains. Our favorite was San Anton, which we biked a number of times, faster each time. The other way down was on wider trails which afforded more of a view. 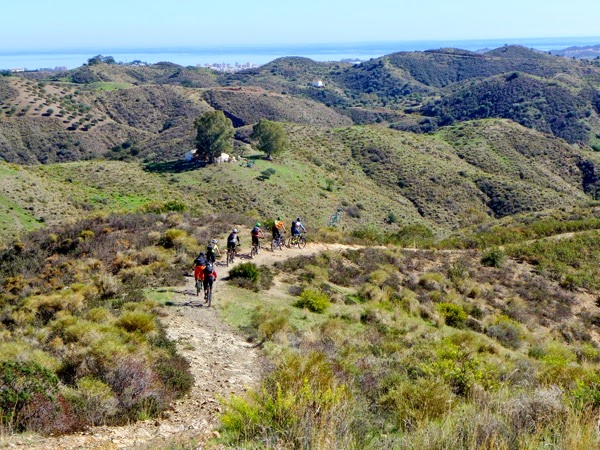 The more spectacular descent through the foothills.

The worst trail we biked was the Bikepark. This single track is built up by locals, but had gotten completely washed out by the rain. Everything was so soft, and if you didn’t have enough speed to go high on the banked turns, you ended up in the washed out, mushy crude in the middle. Luckily it was a one time experience! 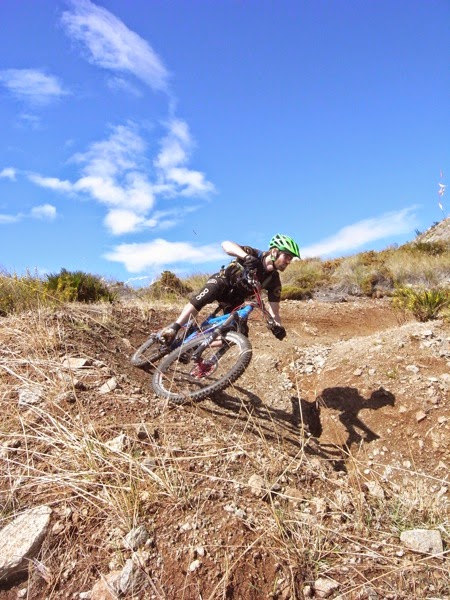 Audun hitting the banked turn in the bike park perfectly.

The most challenging day for me was the day we biked Steve Peat. Steve Peat is a professional downhill mountain biker who has been competing at the top level since the 90’s. He apparently comes to Fuengirola to train, and has a downhill track named after him. On the first day, before the guides knew what we were capable of, they told us “we don’t usually take riders down Steve Peat. It’s for the more crazy riders!"

Yet somehow on our fourth day in Spain, I was standing at the entrance, about to head down Steve Peat. The first run was awful. The rational part of my brain kept telling me that nothing was particularly difficult, I just I had to roll over it, but I couldn’t let go of my brakes, and the trail was strewn with obstacles, no relief from the challenge of picking a good line and letting up down the hill. Ingvild biked slowly in front of me for the second half, giving me a wheel to follow, and I started to bike marginally better.

At the bottom, I was shaking. Everyone assumed I wouldn’t want to do another run, but I did. I simply couldn’t leave a trail like that, that I knew I could do better. So I invoked the Boyfriend Clause, and Audun bike in front of me on the second run, to help me see the lines and encourage me. It went much better - I biked everything, except one steep, root-covered shoot that I couldn’t bring myself to let go and roll right over.

No one took pictures on Steve Peat - we were all too busy biking. 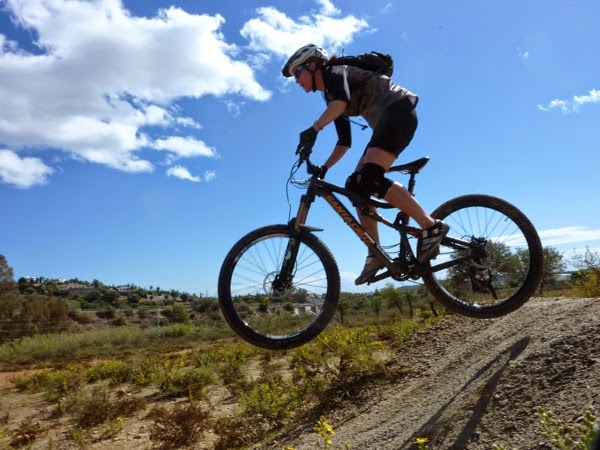 Synne flying over a jump in motorcross park.

Our most spectacular day was probably the day we ascended Pico de Mijas, fondly known as "the Golfballs". A bit of climbing on fire roads and a lot of bike pushing lead us to a summit crowned by one of those white, circular radio tower structures that looked exactly like a gigantic golfball. Our view extended to Gibraltar in the southwest to the Sierra Nevadas in the north. 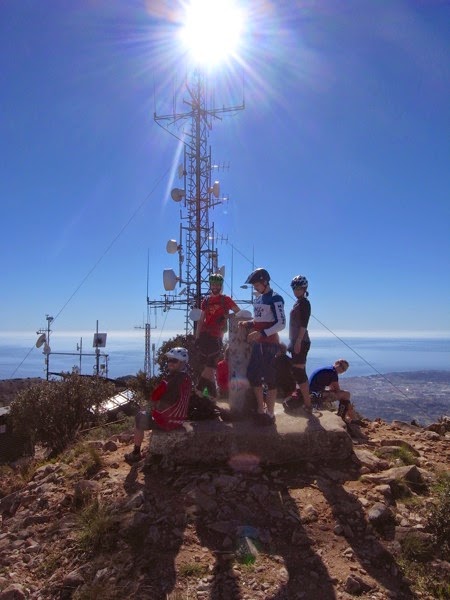 The gang on top of Pico de Mijas.

The descent was a difficult one. At one point I traded bikes with Synne, who has a bigger suspension, beefier bike than me. I was surprised at how much of a difference it made on a technical section - maybe I can at least partially blame my bike, not just my head, when it comes to technical stretches. 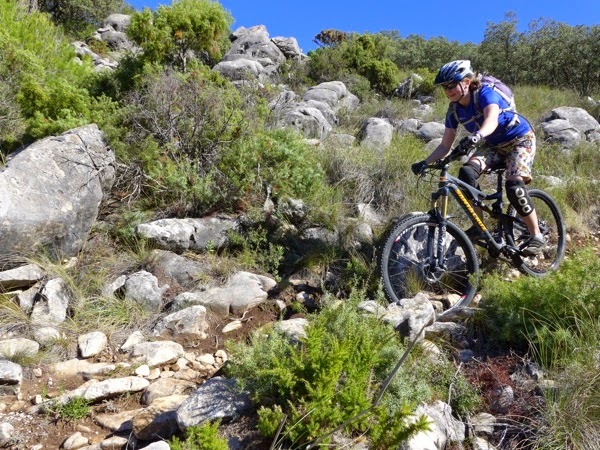 The steep switchbacks off the top of the mountain teetered out, and the trail became faster and flowy-er through the forest. 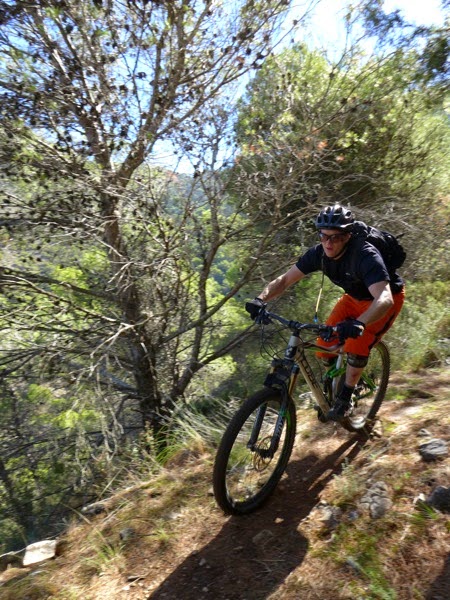 Mats at the bottom of the descent from Pico del Mijas AP jumps in the foothills on the way back to Fuengirola.

On the last day, our group grew considerably with the addition of some new Brits. We drove the two enormous vans 20 km down to the coast to Malàga to check out some new trails that the owner of Sierra MTB, Allen, had found. The first run was kind of boring, mostly a steep fireroad, and I was already tired, to I considered calling it quits. But the second run brought us down this spectacular ridge: 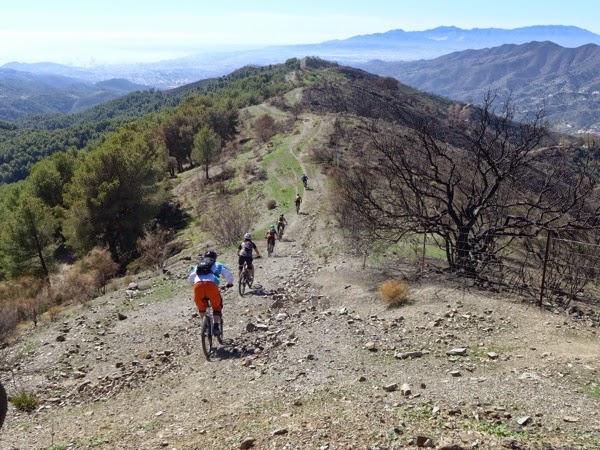 Rolling ridge above Malàga on our last day as a full group.

…and my enthusiasm grew anew.  The trial did these big rolls, going up and down steep, loose rocky sections. It was super hot, and the descents were so loose and steep I could barely cling on. But I made it down, and enjoyed traversing the rolling ridge above Malàga and the sea. 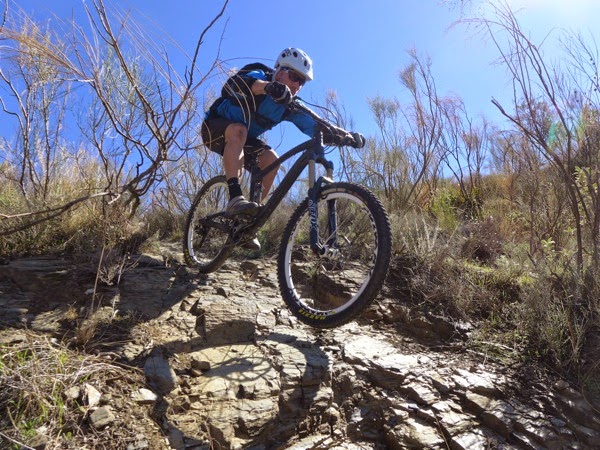 Our guide James on the trail. 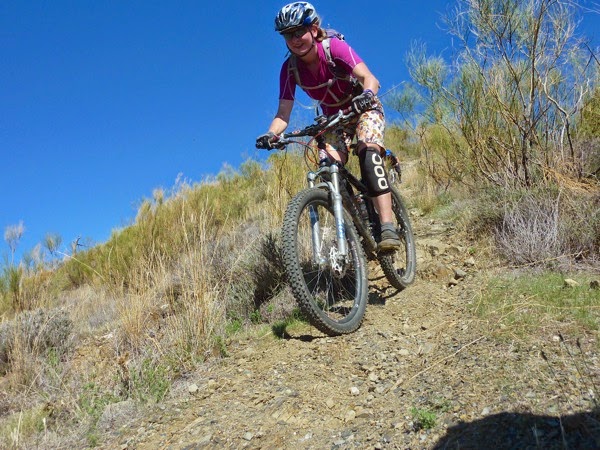 This is fun! Me back on my own bike

On the last day, everyone except Audun and I left on a super early plane. We had a evening flight, and got to enjoy one more day of biking, joining our guides with several other of the British guests. We repeated the same trails as day 3, traversing the rolling fireroad balconies above Fuengirola before descending on Johnny’s trail, a zig-zaging, rocky piece of fun. I had one goal: biking down all the stairs that I had hesitated and consequently stopped on at the first go round. Using the trick from Steve Peat, I made Audun bike directly in front of me, and made it down them all. In many ways, it’s good to be able to repeat trails so that you can see progress. 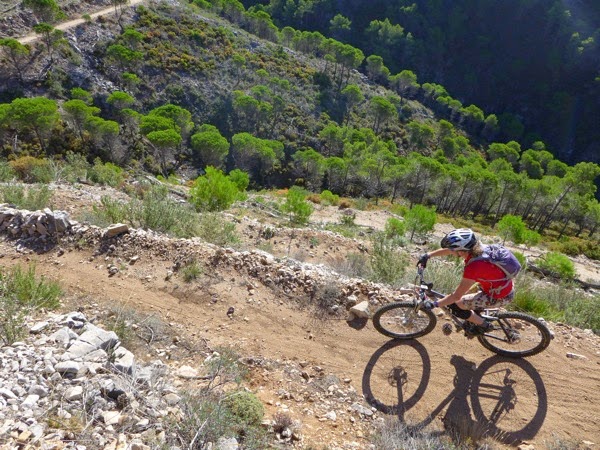 I biked for seven days straight on this vacation, partially because there was nothing else I wanted to do in the city. At the same time, this is a proof that I am somehow growing stronger. On our previous bike trips, I’ve been tired and sick of challenges after 3 or 4 days. So much biking on terrain I struggle with was really good, and this may have been our best enduro vacation so far.