JMT Part 5: Guess what my last name is?! 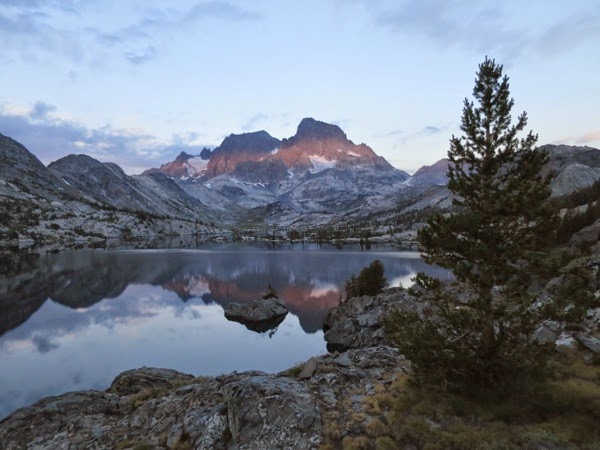 I got up extra early to watch the sunrise on Banner Peak, which rumour had it was particularly spectacular from Garnet Lake. There were some nice colors but they faded quickly because of clouds obscuring the sun. We got a late (hiker-time) start, and meandered the five miles to Shadow Lake by 11 am. Here one can either take the official JMT to Red’s Meadow, for 10 more miles of hiking, or hike 5 miles out to Agnew Meadows and take a shuttle bus to Red’s Meadow. Mom opted for the variant to Agnew Meadows, while the rest of us felt bound to the ‘real’ JMT, no matter how boring or long. We had a quick swim in the frigid inlet to Shadow Lake before charging off.

The trail climbed 700 ft on neatly graded switchback on a hill so steep I would struggled to climb it without a trail. We played a nearly endless round of ‘Fat Cat’, a game in which one player thinks of a rhyme and gives a clue to the other players so that they can guess it. (For example, I’m thinking of a Fat Cat for an overweight feline!)

We then traversed passed a couple of lakes before meandering steadily more downhill through the trees. It was a pleasant forest, but rather monotonous. With a couple miles to go to Red’s, the storm clouds rolled in for the third afternoon in a row. A few scattered drops fell and we pulled on our rain jackets. Then it appeared to clear up; maybe it would be another cop out like yesterday? But alas, it started raining again, hard. Like a sprinter gradually building up to full speed the rain came down more intensely. Then it started to hail pea-size chunks. The thunder was deafening; we couldn’t hold a regular conversation. The only thing to do was to trudge through the rain and count the time between the thunder and lightning strikes (2 seconds!). At least we were in the trees.

The trail quickly became a small river. I was cold, so I stopped to pull on my rain pants, but my shorts were so wet the pants were basically soaked by the time I got them on. We charged past Devil’s Postpile National Monument, and I admired the cool, hexagonal basalt columns, but was sure we would go back later for pictures. My camera was buried in my pack to keep it dry.

We finally arrived at the Red’s Meadow campground, but then realized that the store where we were supposed to the meet Mom and Pennie was another mile up the road. The campground was flooded, and looked to pretty bad, not like a great place to dry off. The ‘resort’ where the store was was a handful of wooden buildings at the end of the road, which was also being thoroughly washed by rainwater.

In the café at the resort we found Mom and Pennie, soaking wet from their hike out to Agnew and worried about us.  We wolfed down hot chocolate and boysenberry pie, and the good news unfolded. Pennie had booked us into a hostel at Mammoth Lakes. With beds, and showers! We jumped on the next shuttle bus to Mammoth, glad to leave the forlorn campsite behind.

Davison Street Guest House is the nitty-gritty hiker hostel in Mammoth. It’s cheap, and has a lofty common room where PCT and JMT hikers alike flock. One of Mom’s best childhood friends, Sarah, had driven from Seattle with her daughter Amanda to meet us in Mammoth. She had taken over the kitchen at the hostel and was cooking an enormous amount of chicken. Dinner was an excited affair, the first day of Mom’s birthday celebration (her birthday is July 18, so actually two days from then). As far as I could tell, the birthday celebrating part was mostly her yelling, “It’s my BIRTHDAY!” with increasing enthusiasm, but everyone was happy and full and excited and clean. 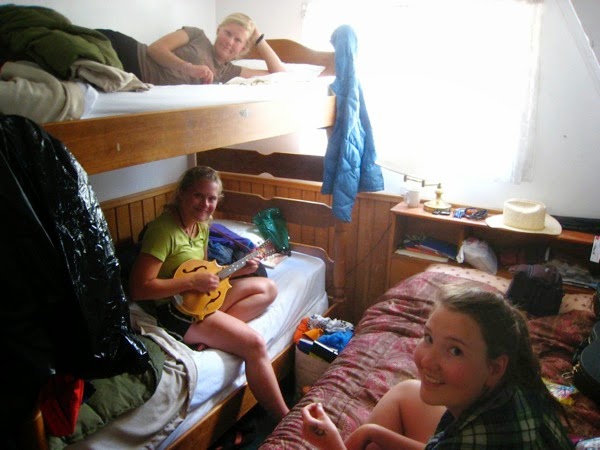 Chilling out at the hostel in Mammoth. Photo by Pennie Rand

One of the women staying in the hostel was this hippy lady named Jen, who collects trash and turns it into something useful. For example, she makes yarn out of plastic (plarn) and knits with it. She also was hiking wearing a green fleece tail. She had been hiking with a group, but wasn’t getting along with them and thought she wouldn’t be able to finish the JMT until she meet this other girl who had also lost her hiking partner. The crazy thing is, Jen and this other girl were totally compatible, had the same interests and everything. Serendipity!

Jen also hula hooped. Like she had crazy hooping skills. She could make the hoop turn around her arms and her nose, and move it all over. She had a little show in honour of mom’s BIRTHDAY. Maybe I should learn to hula hoop.

Early in the morning, I woke, realizing that it was midafternoon Norway time and I could Skype with Audun (my BF). I went out on the porch and started talking to him, wanting to tell him everything I had seen and experienced so far. All of a sudden, a scruffy-looking guy in a sleeping bag shuffled around the corner and said, “Can you keep it down? We’re sleeping here…” Turns out there was a PCT hiker sleeping on the porch. I felt embarrassed for waking them up but angry for them ruining my call.

As I later learned, the PCT hiker’s name was Patches, and he was held up in Mammoth Lakes because of an inflected blister. So infected, in fact, that he had gotten sepsis, and ended up in the hospital the next day to have  a chunk cut out of his foot. Learning this made me feel bad for getting angry in the first place.

Dad, Mom, Sarah and Amanda shuttled up to Red’s Meadow to hike around Devil’s Postpile, but the rest of us opted for a ‘city’ day. Annavitte, Zoe, Karin and I wandered around Mammoth Lakes, buying postcards and snacks. We stopped by a sports store in town that we had heard about from the other hikers, Mammoth Mountaineering, just for the heck of looking at gear.

Which is when we met Asshole Salesman. My theory is that this guy preys off newbie hikers who are insecure about the stuff in their packs. As soon as we told him we were JMT hikers he said, condescendingly, “What broke?”

I sarcastically answered, “My ball point pen,” which was true. The assumption that the only reason we would be in the store was because our gear failed ticked me off.

Asshole Salesman then proceeded to tell me that my shoes were too small (I had sport’s tape on my feet because my sandals, not my hiking shoes, rub).

To add insult to injury, when we told him that one of our group had driven the van around to Mammoth Lakes, which was why we had clean clothes, he said, “So you guys are basically awkward car camping?” I’ll show you awkward car camping, buttwipe. How about you carry my pack for 15 miles tomorrow.

We did not buy anything.

That evening we had a huge pasta dinner, and Matt, Pennie’s husband joined us, completing our group of 8. We toasted mom’s impending birthday again. She got “Boomf”, marshmellows with pictures printed on them (who knew?), and everyone got matching Team StrazilRand t-shirts with the JMT profile on them. 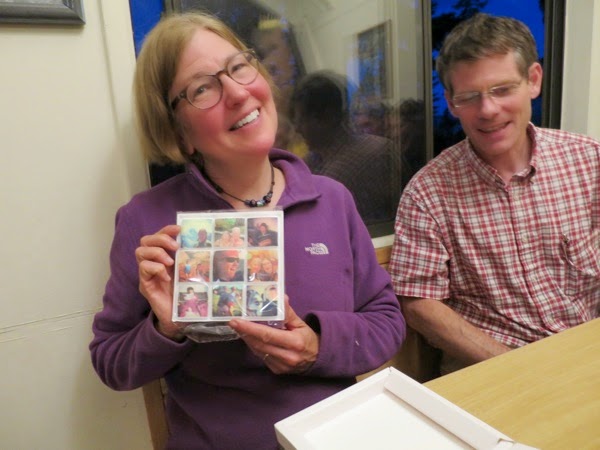 In the morning, we had to catch a shuttle bus up to Red’s Meadow, to pick up the trail where we left off. In the middle of the rush to eat breakfast and pack up, we met Ferrari Guy. He was tall, with a mustache, and wearing cool mountain bikers clothes, even though he was old enough to be my dad.

I nodded, cramming cereal into my mouth. I was in a rush, but I chitchatted back in for with us.

“So where are you headed?” he asked, in a California drawl.

“Well, we are doing the JMT, which goes to Mt Whitney,” I answered quickly.

“Yeah, that’s my dad,” I replied. (Dad is a plant physiologist).

“Yeah, when he said he worked with plants, I thought he meant a different kind of plant, if you know what I mean,” Ferrari Guy winked cheerfully.

He was an aerospace engineer. He had property in ever corner of California. If any one of the things he claimed were true, all of them were. Finally:

“Guess what my last name is?!” he exclaimed, clearly proud of what was coming.

Pennie and I played all excited. “What?!”

Then we had to rush off to catch the shuttle bus. Forty minutes later we were at Red’s, but it took some reshuffling before we were ready to set off. I was antsy; one day and two nights was long enough to spend off the trail! My pack weighed 40 lbs as we set off from Red’s, even though we were carrying 5 days of food. I felt good, like I had gotten rid of all the excess. I wouldn’t have another opportunity to get rid of stuff; no more awkward car camping! 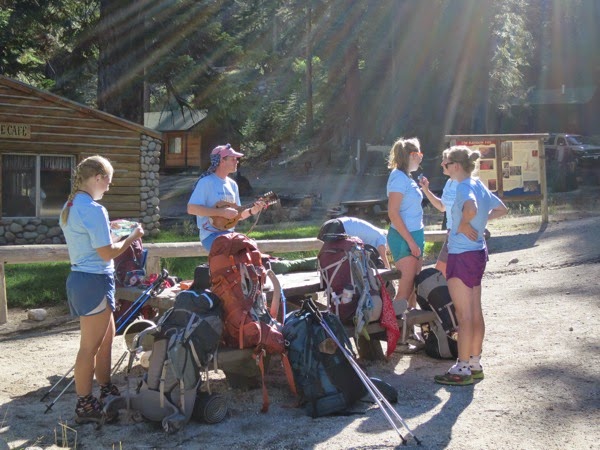 Matt tunes up before we hit the trail from Red’s. Photo by Rick Strimbeck.

Matt play an inaugural trail song on his mandolin, and we were off, up through another huge burn in the sun. 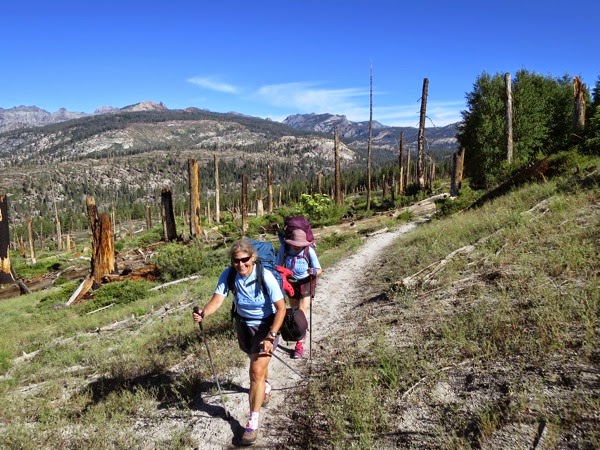 A few miles in, we left our packs by the trail to hike up a small cinder cone. A 10 minute scramble up the loose, red pumice lead us to an open vantage point. Another red cindercone was right across from us, with a verdant meadow spread below it creating an incredible contrast of color. In the distance, I could see Banner Peak, and it looked impressively far away. Looking in the opposite direction, I saw only unknown terrain. We would soon be traversing a tiny strip of the view in the distance, but the end of it all was still more than 150 miles away. 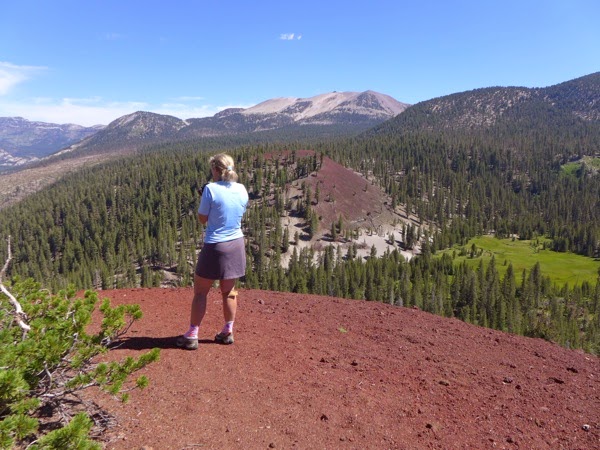 Pennie on the little cinder cone.

The rest of the hike to Duck Creek passed quick. The trail goes through a forest, the soil going from volcanic back to granite, and gradually gains elevation. We set up camp by the creek early, so Zoe, Annavitte, Karin and I had time for an hour long yoga session before dinner time. Doing yoga after hike feels magnificent, and sounds really ideal (connect with yourself! and nature!), but is definitely more uncomfortable than at home. My sleeping pad is narrower than a regular yoga mat, and you have to avoid rocks and roots. 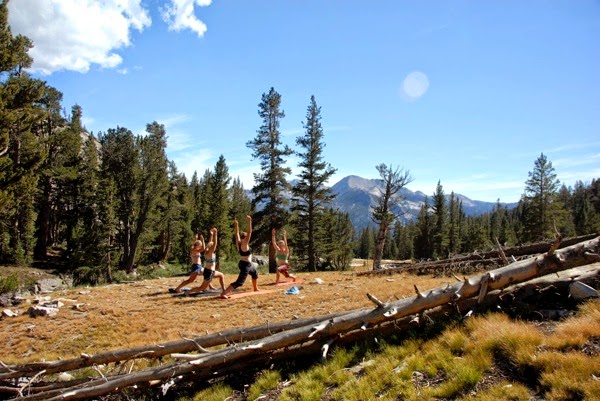 Zoe, Karin, Annavitte and me, aka Mountain Yoga Goddesses. Photo by Pennie Rand

Today it was actually Mom’s birthday (“It’s my BIRTHDAY!”), so we had salmon pea wiggle (basically mac’n’cheese with peas and canned salmon) and no-bake maple cheesecake in her name. Then I took pictures of (yet another) gorgeous Sierra sunset before collapsing in my tent. 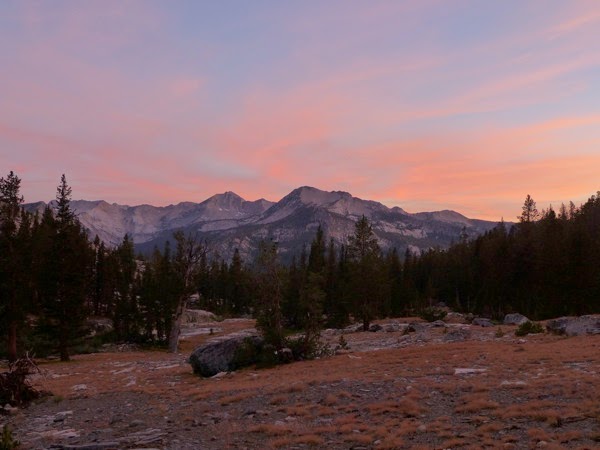