JMT part 1: In which a journey of 211 miles starts with a day hike

The weeks have passed quickly since I set out and completed the John Muir Trail with 7 of the most enjoyable people one could possibly thru-hike with. I could make all sorts of excuses about how I’ve been too busy to blog, but the honest truth is that I needed to let the whole experience marinate a little bit before I wrote about.

Before I get into the nitty-gritty, I have a confession to make. I think hiking the JMT might the single hardest thing I’ve ever done. I have thought about how to define the difficulty of the different physical endeavours, and have come to the conclusion that the most difficult endeavours are those that you actually consider quitting. The sheer number of times I mentally vowed that I would quit the JMT attests to how difficult this trip was, and not in the ways I expected.

In my darkest thru-hiker hour I proclaimed that I would only write one thing about the JMT on my blog: “THRU-HIKING SUCKS!” Needless to say, I changed my mind about that particular gem.

We were due to start the JMT July 10, but due to the difficulties of getting a permit out of Happy Isles for 8 hikers, we were starting from Mono Meadows, essentially on the east side of Yosemite Valley rather than in the Valley itself. Dad and I had taken a YARTS bus into the Valley to collect the permits while the others had driven the van, dubbed ‘White Thunder’ to Bridalveil Creek campground, where we would start the JMT the next day.

And who were we? Two families, the Strimbeck-Bazilchuks and the Rands, both originally from Richmond, Vermont and all avid outdoorsmen and women. Together, we call ourselves the StrazilRands. In my family, there’s me, Dad, Mom and Zoe (my sister, 19). The Rands consist of Pennie (the mom), Matt (the dad, who would join us in Mammoth), Annevitte (the elder sister, 19) and Karin (the younger sister, 16).

Dad and I fought our way through the crowds in Yosemite Valley to the permit office, and received our Permit Talk from one range slurping a green smoothie and another who wore more than a wildernessy amount of makeup. After consuming greasy breakfast sandwiches in the Deli (second breakfast!), we waddled off to a shuttle bus to find the trailhead.
At the Happy Isles trailhead sign which marks the official start of the JMT, Dad and I took the obligatory pictures. “Mt. Whitney via John Muir Trail 211 miles,” sign proclaimed under a list of other destination. I found this figure intimidating. Not so much the distance itself as the time it represented. We planned to be on top of Mt. Whitney in 24 days. There are few things I have done for 24 days straight. Now I was headed to the simplest form of doing: put all the stuff you need on your back and move forward. All day, every day.

Our day hike brought us up the Mist Trail. I’m not sure where the definition of trail ends and road starts, but the highly traffic trails in the National Parks are definitely cresting that limit. We swam up through a sea of shirtless college guys, mothers coaxing their children one step at a time with candy, and larger individuals for whom this seemed to be a very strenuous hike indeed. The Mist Trail ascends steeply through the trees, first up to Vernal Falls and then Nevada Falls. Both of the Falls were ghosts of their usual voluminous flow due to the drought in California.
We stopped at the top of the Vernal Falls and I got out a bag of Reese’s Peanut Butter Cups. I looked away to take in the view of the valley, and when I looked back there was a fluffy squirrel butt sticking out of the Reese’s bag. I squealed, and Dad reacted quickly, grabbing the squirrel and throwing it away. One scary experience for the squirrel probably won’t wipe away years of being feed by tourists from it's memory, but one can hope. 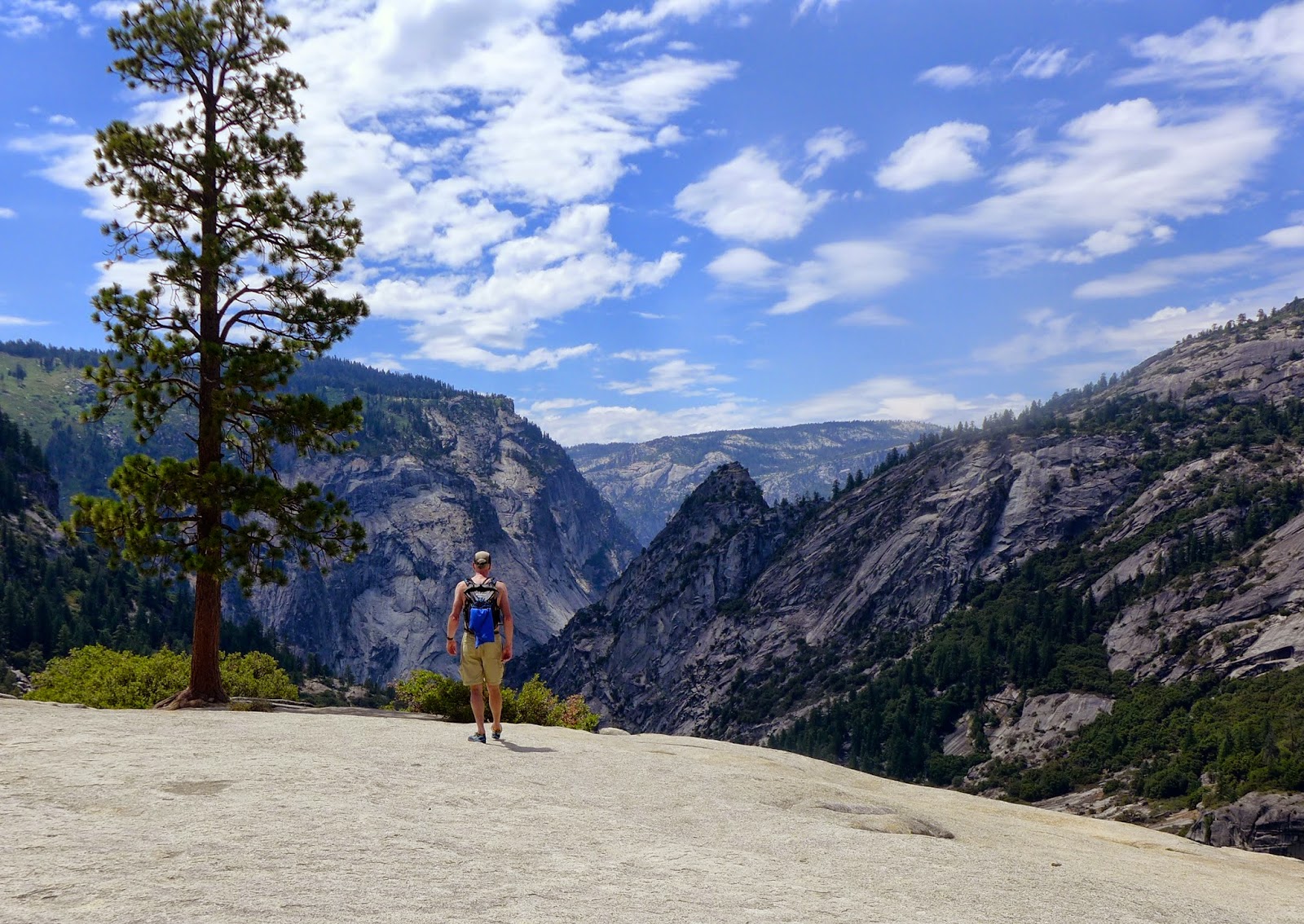 Once we cleared the top of Nevada Falls, the tourist crowds shrunk. The heat of the day started to sink in and I soak in the calm part of the river above the top of the Falls with all of my clothes on. As we eat our Deli sandwiches, enjoying the last fresh veggies in a while, fat squirrels prance around, looking for treats. I hiss and swat at them, trying to show them that humans are dangerous and mean. I don’t seem to get the message through.

We soon left the sheer granite domes of the Valley behind and hike down towards Illiouette Creek. There are several burns (areas where forest fires have been), black charred trees stark against the green undergrowth.

I started to get tired of the hot sun. I thought about how much water I had left - not as much as I’d like - and so I drank conservatively. We finally reached the Mono Meadows trailhead at 6 pm, and hitched a hike down to the campground.

When the rest of the gang arrived from their day in the Valley, we all piled in the car and drove off to Glacier Point to watch the sunset. Pennie squealed and took a zillion photos of everyone with her big DSLR. Zoe and Annevitte quietly squint through their viewfinders of their smaller DSLRS, so focused you know they must be getting the right shot. I snapped a few photos but feel the removal from the landscape that I often experience at viewpoints. Experiencing something is touching it, moving through, not just gawking at it.

We ate a late supper in the dark and discussed trail names, which you are supposed to get from other hikers. Everyone is excited about the tomorrow, the real start.
- The Wild Bazilchuk
Labels: hiking jmt mountains