We packed our skis along with our hopes into the tiny rental car and crept out of frosty, barren Oslo. Along 450 km up the E6, the main road that winds and twists through Norway, there was no snow. Only cold.

Five hours later, in the ski town of Oppdal, we saw the first snow. It was a dusting, a teaser at most. The hope prevailed with the snow. After all, a snowstorm was forecast for the weekend.

Snow shouldn't have been the important thing, but it always is. We were there to celebrate Thanksgiving. (I'm perfectly aware that it's not until tomorrow but since Americans in Norway don't get any vacation for Thanksgiving, we always celebrate during a weekend.) For the first time we had decided to host Thanksgiving at a large, comfortable mountain hut called Bårdsgarden, about 20 minutes outside of Oppdal. Part of the motivation, of course was that we might squeeze in a few turns in between turkey and pie.

The next morning grey clouds foreshadowed an impending storm. But the trusty Norwegian weather forecast said the snow wouldn't start till mid-afternoon, so me and Dad headed out for a run in the snow. 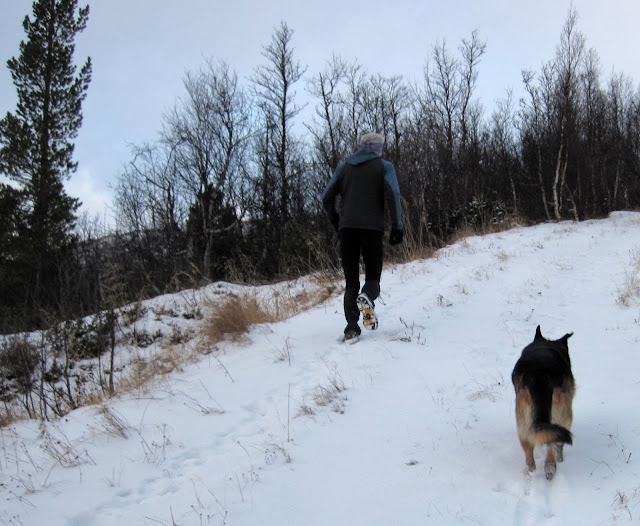 Up up up the big hill behind Bårdsgarden we went. At first I kept his tempo, until lactic acid started to build in my legs and I slowed down a tad, watching as he gained first 10, then 50 meters on me. It was OK though, because as we headed down the hill to the next valley over, the going grew tricky and I came into my own. Slippery footing, a weaving trail, slight downhill. I'm a technical runner and I own it.

The intensity of the run slowed as we continued in towards Vassendsætra, another hut at the end of Gjevilvatnet lake. We started talking about the John Muir Trail (which I shall henceforth refer to as the JMT). This 338 km long hiking trail traverses the High Sierras in California, and I've grown up listening to my dad tell stories about its beauty. We're planning a family trip to do the JMT next summer - hopefully all of us (except the faithful hound Sebastian) will be doing it next July. And I shall of course share more on the blog.

We ran all the way in to Vassendsætra, and the view reminded me why I started to run all those years ago. To be able to cover long distances in the mountains in relatively short time. To traverse the trails with loping tracks and see all the sides of a mountain. Between 2007 and 2011 I worked every summer in these mountains, and explored my obscure and well-known corners of them by running in my time off. But those are stories for another day.

It took us nearly two hours to cover the 10.5 km to Vassendsætra and back - including nearly 500 meters of climbing. Running in the snow is slow, but it sure is fun!

I ate a tiny lunch to prepare for the rigours of Thanksgiving consumption. I was not disappointed.

We were an international assortment come together to celebrate this most American holiday. Me, mom and dad; my Norwegian boyfriend Audun; two boys from Vermont on exchange in Norway who know my parents; and some Dutch friends of the family. Our spirit was exactly as it should be: one of friendship, and of overeating.

For once I contributed to dinner, or at least dessert. I have been carefully crafting the perfect lemon meringue pie for the last 3 months, so of course I brought it for Thanksgiving. It was excellent - lemon meringue pie might actually be the ultimate dessert. Light, yet satisfying. Sweet and tangy sour at the same time.

As we ate inside, a storm began to rage outside. It was snowing - it was BLIZZING! The next morning we headed up the hill behind the hut again, this time kitted out with skis and our hoods drawn up against the snow and wind. There was at least 30 cm of new snow, and breaking tracks was an anaerobic affair.


On the way down there was an almost frustrating amount of snow. It was beautiful, knee-deep powder, but the slope just wasn't steep enough. If you poled as hard as you could, you might just barely be able to do half a turn.
Sadly, one run was all she wrote. After that we cleaned up the hut and drove home in the snowstorm. Now it's time to pray to the snow gods for a good winter and more POW!