The Ardèche gorge is a 30 km stretch of river about 30 km away from Grenoble.
It's famous for the towering limestone cliffs on either side of the river, and is a popular tourist destination as the river is easily navigable by kayak or canoe.

I got into a trip down the gorge in typical Erasmus fashion - completely cluelessly. "Hey, wanna go kayaking or canoeing or something on Saturday?" "Sure!" 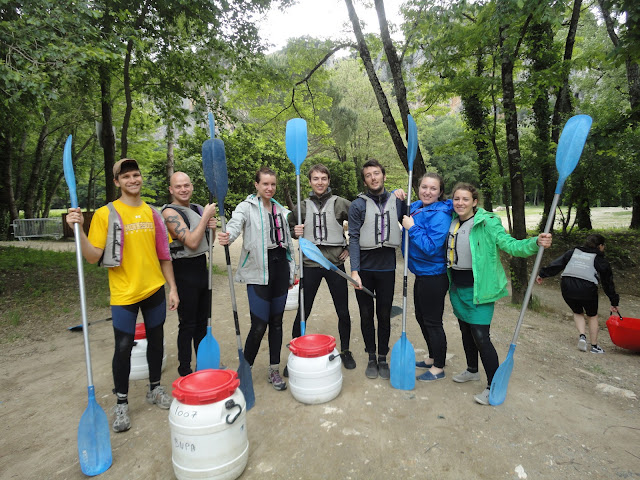 When we left Grenoble at 7 am, it was raining - a great start of a day outside. We spent most of the car ride discussing how cold it would be to spend a whole day on the river in the rain. A few hours later, the rain had cleared and we pulled into a boat rental place lined up next to a row of other boat rental places. After signing a form that said we could all swim, and being given a few cursory instructions about how to cross the rapids, we were sent off down the river.

Needless to say, there were hundreds, maybe thousands of clueless tourists on the river that day. And we were among of them.

There were some mild rapids along the river, and at every one there was someone who had flipped their boat.The strong winds on the river that day made things hard, especially for people with little to no boat experience.

Our group experienced our fair share of spills, including one dramatic moment when a boat tipped and then started to float away down the river. The boat was rescued, the tipped party swam over to the river bank and then the sun came out.

During the dismal weather of the morning, I hadn't even thought to bring sunscreen. So I ended the day with a lovely sandal-and-wetsuit tan from these shoes:

Gorges de l'Ardèche: 8/10 for enjoyable way to spend a day and beautiful place, but 2/10 for tourist attraction (sooo many people)

On Sunday I did something that made me feel like kind of an oddball. I got up early, took a bus into Vercors, and ran a race. I felt odd because I didn't know anyone else competing. I had just found the race online and thought it sounded fun. I felt odd when I had to ask the race organizers to watch my stuff while I race, because I was the only competitor who didn't arrive by car (apparently).

When I started racing the Trail du Pic St Michel, however, I felt anything but odd. I was mostly just having a good old time. The race first took us 900 vertical meters straight uphill from Lans en Vercors to the peak of Pic St Michel. As it was a mass start, the trails were rather crowded at first and running turned into uphill powerwalking.

We can over treeline to spectacular views, and a steady, steep climb.

The trail finally brought us to the edge of the characteristic Vercors balcony cliff we see from Grenoble.
Then finally, 1:20 and 8 km from the start, I reached the top of Pic St Michel


From there, the trail dropped steeply into the fog for a few hundred meters, and rolled along the balcony for a while before descending in earnest. There were some patches of snow here and there, and it had been raining, making for a slick, difficult descent. Just the way I like it! I bombed down the larger part of the descent, passing people and completely concentrated on not falling over and straining my ankle.

Needless to say, by the time I started the 150 meter climb the organizers had so kindly put in 5 km from the finished, I starting to feel tired. But 23.8 km, 1435 vertical meters, and 3:21 later, I crossed the finished line, super happy to have spent another beautiful day in the mountains.

Three days later, I'm still having trouble walking. I really shot my quads bounding down the descent! (Check out my Strava track)