There's a certain feeling I get early in the morning before I'm about to do something particularly difficult  and/or stupid. At 7 o'clock yesterday morning, it was still dark out, and I had plenty of time to prepare for the day ahead. I ate a leisurely breakfast of eggs, yoghurt and coffee (not mixed together), and wandered back to my room to do an equipment check. By this time the sun had risen - and I noticed that it was grey and drizzling.

I checked Facebook to see if I had received messages from any of the other exchanges students I was supposed to meet. No go. As far as I could tell, everyone was still ready for the long day ahead, and I was not about to throw in the towel before walking out the door.

By 9 o'clock I arrived at the agreed meeting point, and found Roddy, a Scottish exchange student. Everyone else had looked at the weather, rolled over, and gone by to sleep. At least there's someone as stupid as me out there. And we pedaled off into the light, grey drizzle.

Our goal was Alpe d'Huez, legendary climb of the Tour de France. We wanted to see the hill that makes cyclists or breaks them, the site of epic battles between the big guns of the peloton. My image of climbing Alpe d'Huez is something like this: 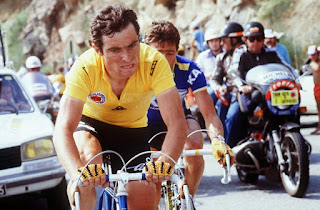 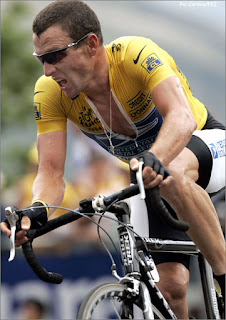 Or even this this: 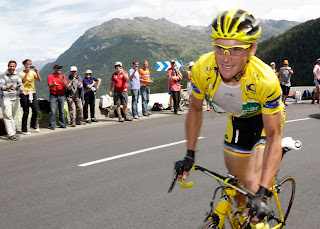 I was excited not only to tread in the masters' foot (or wheel) steps, but also to feel their pain. We would be doing the ascent from Grenoble itself, which turned out to be a noble 134 km (Only 9 km shorter than the shortest non-time trial stage of the Tour this year!). If you are going to play Tour de France, do it properly!

The first 20 km rolled away quickly under my bike, starting with climb to Uriage and descent to Vizille, which I've done a number of times. Although it was raining, it was pretty warm, and that early on a Sunday there where almost no cars.


From Vizille, we scooted through Péage de Vizille and out onto the highway up the dramatic, deep valley towards Bourg-d'Oisans. The road climbing extremely slowly, and the rain turned from a drizzle into more of a driving downpour. The beautiful valley around us was shrouded in clouds.

The closer we got to the base of the climb, the more my anticipation grew. We talked a lot about the climb: how hard we thought it would be, how fast we thought we could do it. Two and a half hours and more than 50 km from Grenoble, we reached the base of the mountain.

On the climb, we both went at our own speeds, and so I quickly lost Roddy. Alpe d'Huez consists of 21 numbered switchbacks, each of which has a sign with the name of a stage winner. The first switchback on the way up is labeled 21, the second 20, and so on - a countdown to the top. This of course that means you don't have to remember how many switchbacks you've done; you just watch the signs.

The first couple switchbacks were the steepest, but great fun. I was bouncy and excited; I was conquering the great climb of the Tour de France. I felt like this:

The roads were plastered with partially washed out graffiti, cheering on riders or commemorating groups of friends who had visited. I could image all the people lined up the road, screaming. In July the sun would be shining, and you would actually be able to see the mountains around. I wished I could see the view.

On the way up you pass through some small, charming French towns. In the weather we had, buildings would just appear suddenly appear in the mist.

At a certain point the novelty of the climb wore off. I was wet and my legs were heavy. Then I felt more like this:

It was a little frustrating that I didn't know how far it was between each switchback - the stretch between switchback 6 and 5, for example, was particularly long and frustrating because I had promised myself a snack at switchback 5, and it seemed to never appear.

The end of the climb is actually kind of anticlimatic. After 13 km of an average of 10% grade, the road kind of flattens out and passing through the stunningly unappealing town of Alpe d'Huez. So after the last switchback, you actually still have about 2 km to go. The top is just a turn around point surrounded by stores, all of which were closed in the off season.

I cruised down to the base of Alpe d'Huez village to meet Roddy at the only open café. We were the only customers. He had reached the top in 1:41, 7 minutes before me.

I wolfed down a sandwich and bowl of soup, while discussing the finer points of Scottish cuisine with Roddy. For the record, he really likes haggis, which is says 'has a unique flavor'. When I asked him what he thought about the texture (of eating intestines), he said (quote, add Scottish accent):

"The texture is... interesting."

We took the descent quite slowly because of the slick, water covered roads, even stopping to take some photos. It was also really, really cold. We were both completely soaked, and I couldn't feel my feet by the end of the descent.


Towards the bottom Roddy managed to get a flat tire, and while waiting for him I noticed that the clouds were coming off the mountains. They were big mountains. I tried to get a picture, but wasn't at a great angle.

From the base we had a 30 km runout to Vizille, which seemed completely different than in the morning (to me). The clouds had lifted, it wasn't raining, and we could see the valley much more. Roddy punctured again (!), leading to a lovely stream of curse words. I took the opportunity to eat about 6 cookies and snap some photos.

From Vizille I felt good because I knew the stretch of road we had yet to cover quite well. The only problem is there is a hill in the middle, a short climb up to Uriage. This last climb that only gains 100 vertical was the hardest part of the day. My legs where completely gone.

From Uriage the last kms were all downhill, and I cruised back to my residence.

The trip to Alpe d'Huez makes a great, challenge day trip from Grenoble (for those interested in all the stats, check out the Strava track). I would love to go back and do it again in better weather. I also think I could improve my time just by knowing the switchbacks a little better.

But now it's time for a rest day!