Where the fresh snow's at

Last weekend I was invited to my friend Fredrik’s cabin in Bjorli, and much to my enthusiasm, the forecast called for a ton of fresh snow during the week. At first the weekend was supposed to be sunny, and I thought, ‘Jackpot!’ But the forecast turned, and when seven snow-hungry skis rolled in to the cabin on Friday night, the potential for low cloud cover and high avalanche danger was all that was talked about. Then we woke up to this: 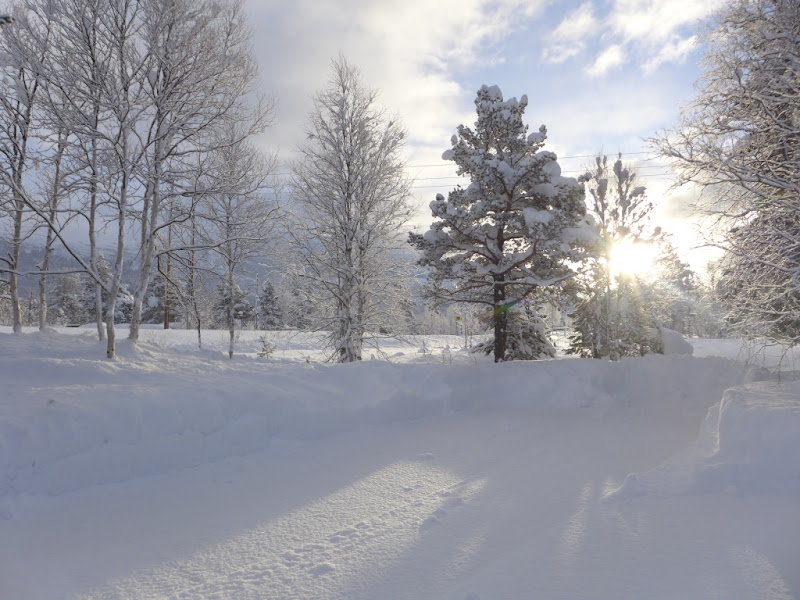 Despite the weather not being nearly as bad as we feared, the avalanche danger was quite high. So we set our sights on an easy, safe peak close to the cabin called Rånåkollen. As first we followed a day old skin track uphill, but the skier had apparently given up before treeline, and we were stuck breaking our own trail. 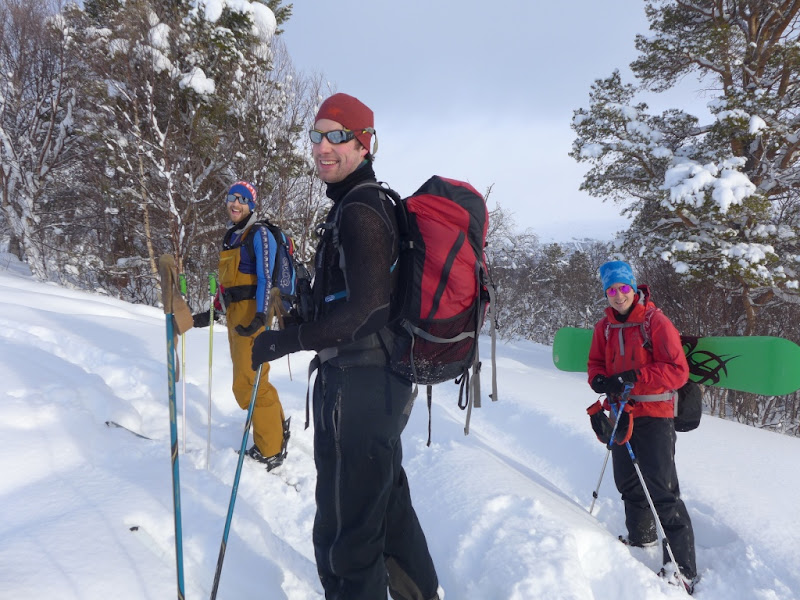 From the left Kenny, Daniel and Magnus on the first lap of Rånåkollen

Luckily there was seven of us, and like the front of the Tour de France peloton itself we rotated on trail break duty. There was nigh on a meter of fresh powder, which warmed both our hearts in a figurative and literal sense as we skinned uphill.

Alas, the forecast got the better of us in the end, and as we approached the top of Rånåkollen, the clouds rolled in. 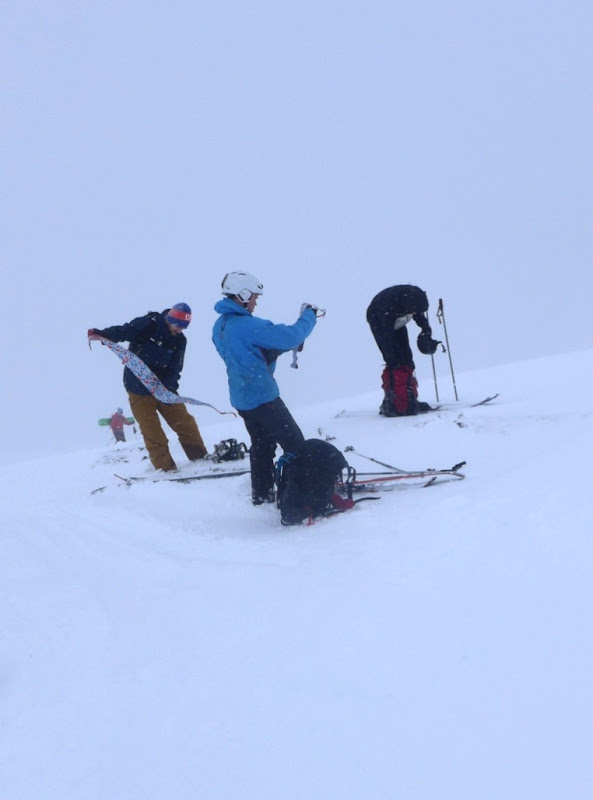 Kenny, Fredrik and Daniel folding skins in wind and white out.

Despite the low visibility, we thoroughly enjoyed the powder on the way down. 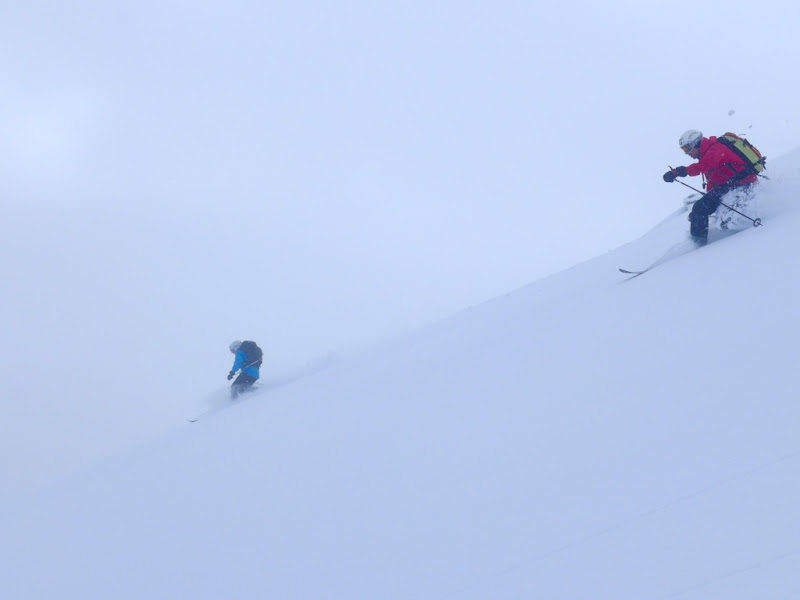 Fredrik and Andreas getting the goods.

Rånåkollen was so small that there was nothing to do but climb it again…and again. The weather fluctuated all day, sometimes giving us tantalizing glances of the scenery that we could be seeing. Skiing the same mountain (or maybe a protrusion that one can climb three times in one day should better be referred to as a hill!) several times gave us the opportunity to find better lines down each time. 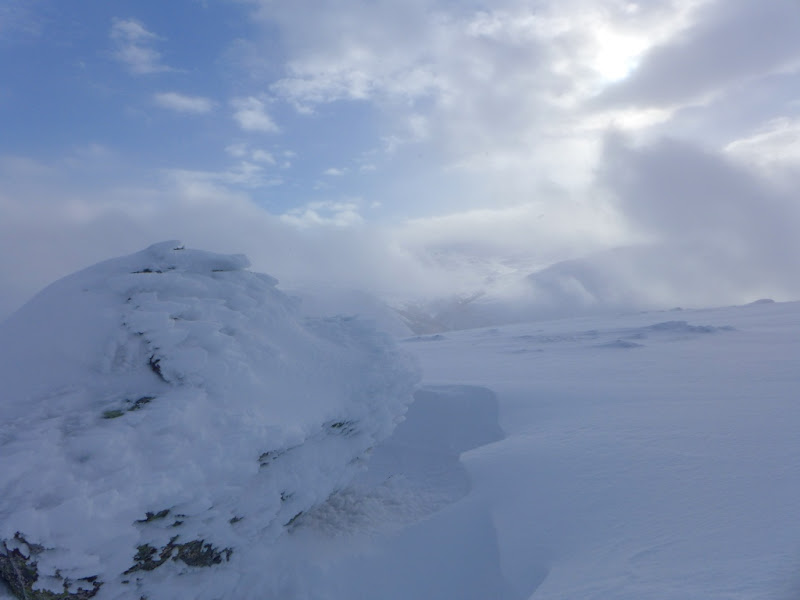 Fickel weather on top of Rånåkollen.

The major mishap of the day was went Audun decided to jump of a cliff (this in itself is entirely normal), but discovered that the low light had obscured an entirely flat landing. He promptly did a face plant and broke his binding. It was then that I learned that even on one ski, he could ski faster than me. After skiing down the mountain teetering on his single good ski, he managed to repair his binding using a binding from some extra skis Andreas had in his van. 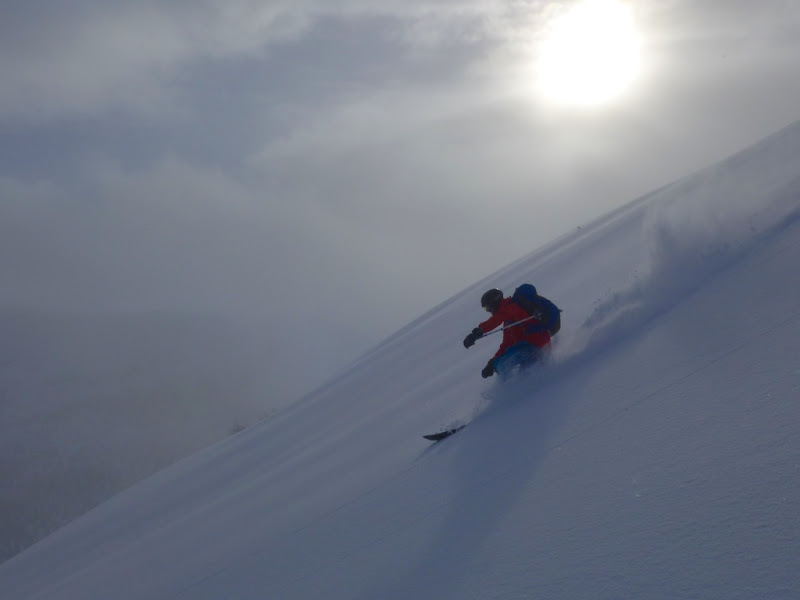 Audun in full tele in the moody sunlight.

It had been a magnificent day, and we retired after three laps up Rånåkallen to revel in powder glory and eat like there was no tomorrow. 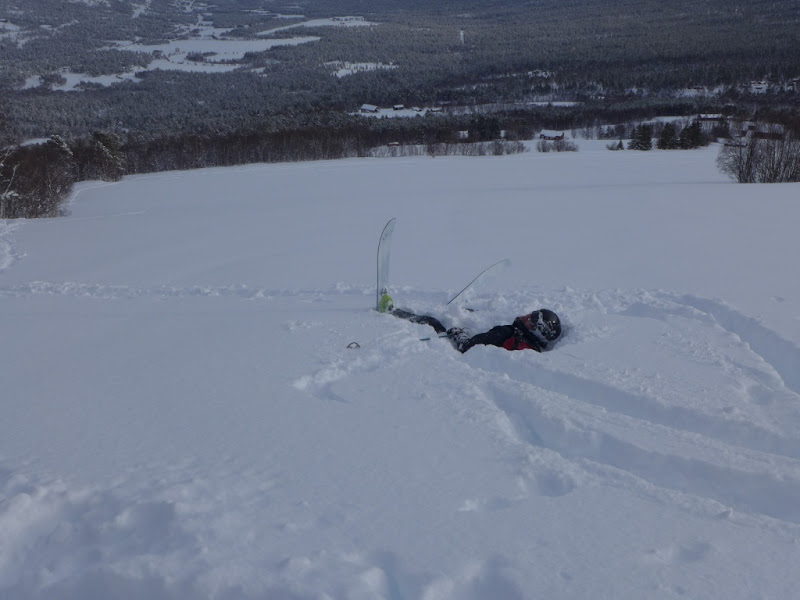 Daniel sits down to enjoy the view at the end of the day.

There was a tomorrow, and with the weather and conditions being similar to the day before we decided to try another local top, this one called ‘Toppen’ (which means the top). The skiing turned out to be not as fun on this one (too flat for all that pow!) but we had a nice day out and about. 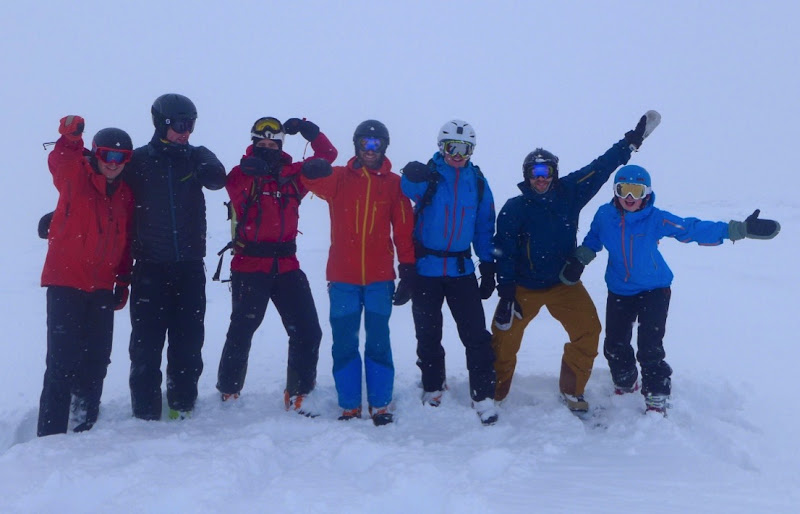 Proof that we reached the summit of Toppen. You can totally tell we’re on top of a mountain, right? From the left Magnus, Daniel, Andreas, Audun, Fredrik, Kenny and me.

Here’s a round up of the training week leading up to last weekend:

Monday: The weather was gorgeous in Oslo, and I decided to take time off in the middle of the day to go running (the perks of being a PhD student!). I’m experimenting with ‘inverting’ my training week. A traditional training week calls for a long run on the weekend, but during this season at least I would rather be skiing. So I’m trying to do the long run early in the week. I meant to do around 21K, but the discovery of a new trail along Maridalsvann extended it to about 23K. Maridalsvann is the water source for Oslo, so usually there’s a fence around the perimeter so you can’t get near the lake. But to my delight, the fence was open. I had to see what the trail was like. 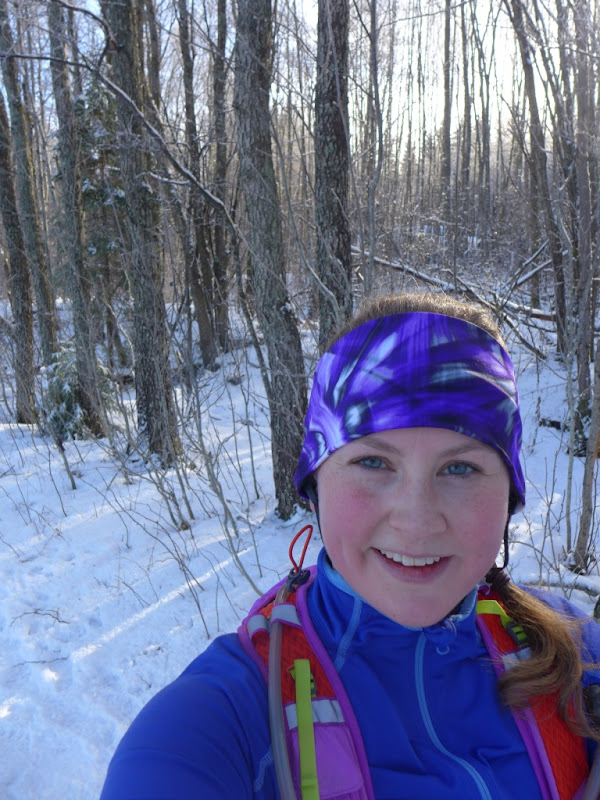 Happy to be exploring new trails! 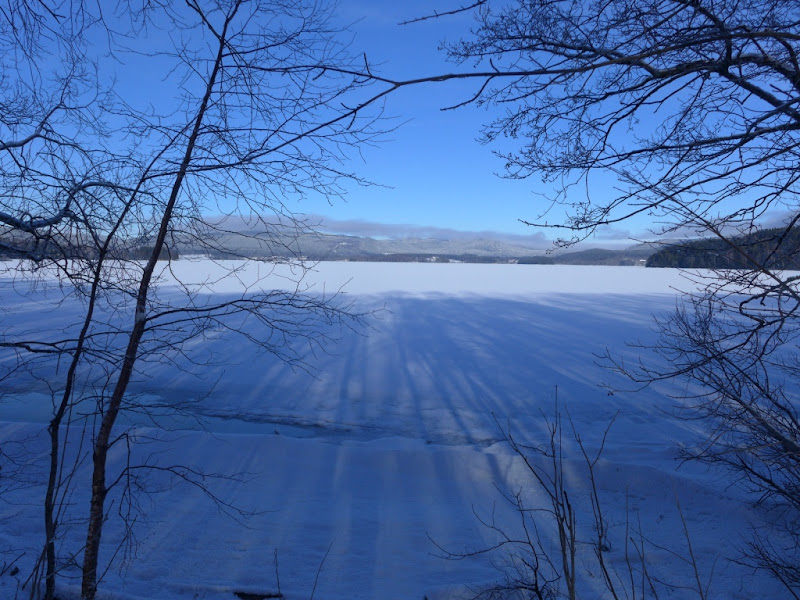 A gorgeous day at Maridalsvann.

After about 15K, I picked up the pace from leisurely to focused, trying to keep a faster pace while still maintaining a relaxed feel. The last kilometers passed quickly.

Wednesday: Rest day. Had planned to squeak in a run in the morning, but wasn’t feeling it, so decided rest was in order. In the evening, I went see the National Ballet’s production of Anna Karenina  after an excellent dinner with my friend Hanne. 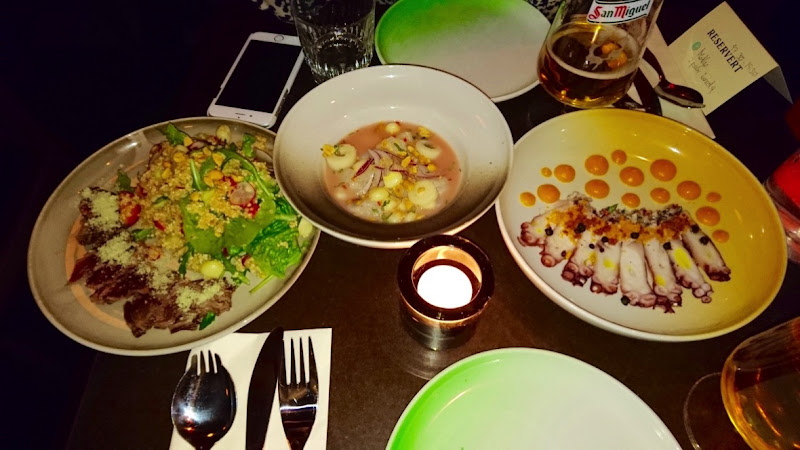 Peruvian food at Piscoteket in Oslo. From the left horse meat with quinoa salad, cod ceviche, and squid with a yummy orange sauce.

Thursdays are now speed work days, so I went back to the indoor track at Bislett in the evening. This time I was alone, and the intervals were of the extremely painful, 10 minute variety. My original idea was to do three 10 minute intervals but I felt my form getting sloppy at the end of the second and decided to call it a day. This is how I felt after the intervals: 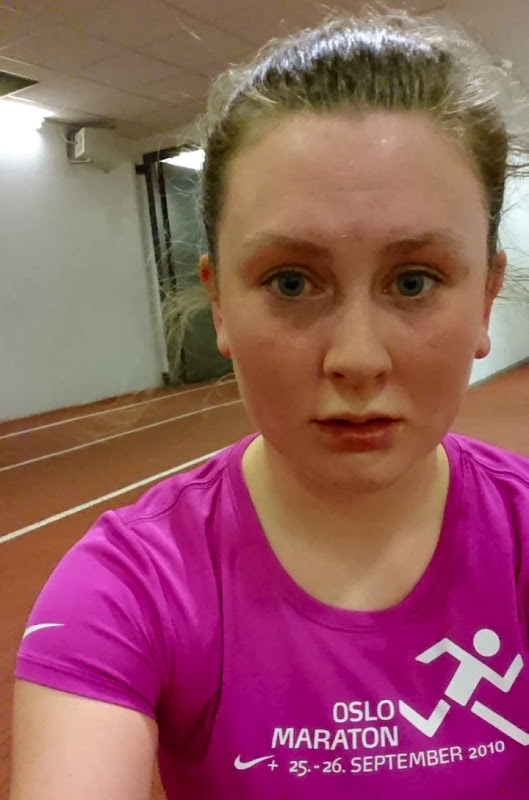 Clearly I need to do this more often.

Friday: Running commute. My legs were heavy from the intervals the evening before, but I seem to shed some of the weight on the commute. There definitely is something to recovery running. 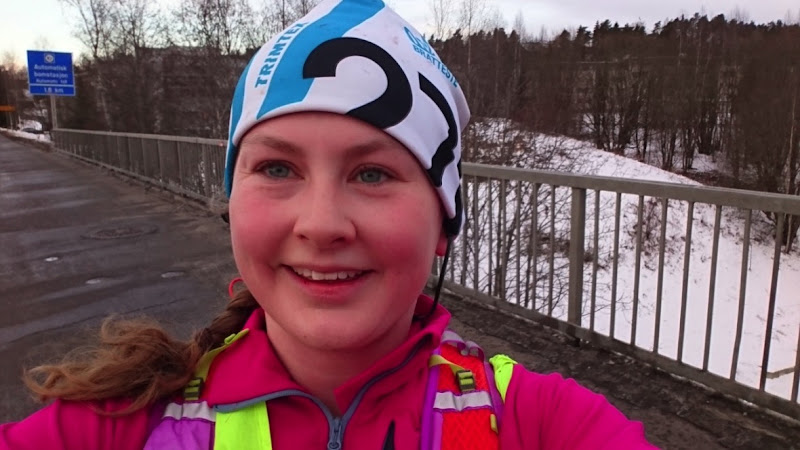 Happy morning face on the commute.