Last weekend we made the long drive from Oslo to Sogndal to visit our friends Ingvild and Øyvind (previously featured in posts such as this one and this one). They moved to Sogndal last fall and bought a house, which just begs for a visit. The weather forecast for Saturday was good, so we made a plan for a longish tour on Saturday. By staging cars on either side of the tunnel that goes under the mountains between Sogndal and Fjærland, we could ski over those same mountains in a satisfying point-to-point tour.

The day started out marvelously as we follow Tverrelv valley upwards below Frudalshesten. It was almost too hot climbing in the bowl between reflective snow slopes, and we quickly stripped down to the bare minimum of clothing necessary to climb a snow-covered mountain. As we skinned upwards, I marveled at the optimism that beautiful weather and good snow can bring. The evening before I had been tired and cranky, almost regretting the choice to spend my Friday evening in a car. In a morning’s sunshine, any regrets were wiped away. Ingvild in the sun below Frudalshesten.

Suddenly, the clouds descended on us. It happened so fast that we didn’t even contemplate the changing weather, and decided to continue simply because clouds that come in so quickly must surely disappear just as quickly. There were fresh skin tracks from some early-bird skiers headed in the right direction, so we followed them. The slope grew steeper and steeper, and I grew nervous when I realized I didn’t know what kind of terrain we had above us. Then we heard a rumbling sound, and Øyvind above me yelled, “Snow! Falling snow!” It wasn’t an avalanche, just some chunks being spit out by the sun-warmed slopes above us. This is not a good slope to be on in low visibility, I thought. But the decision had been made, and all we could do was try to get above the steep slope as quickly as possible. 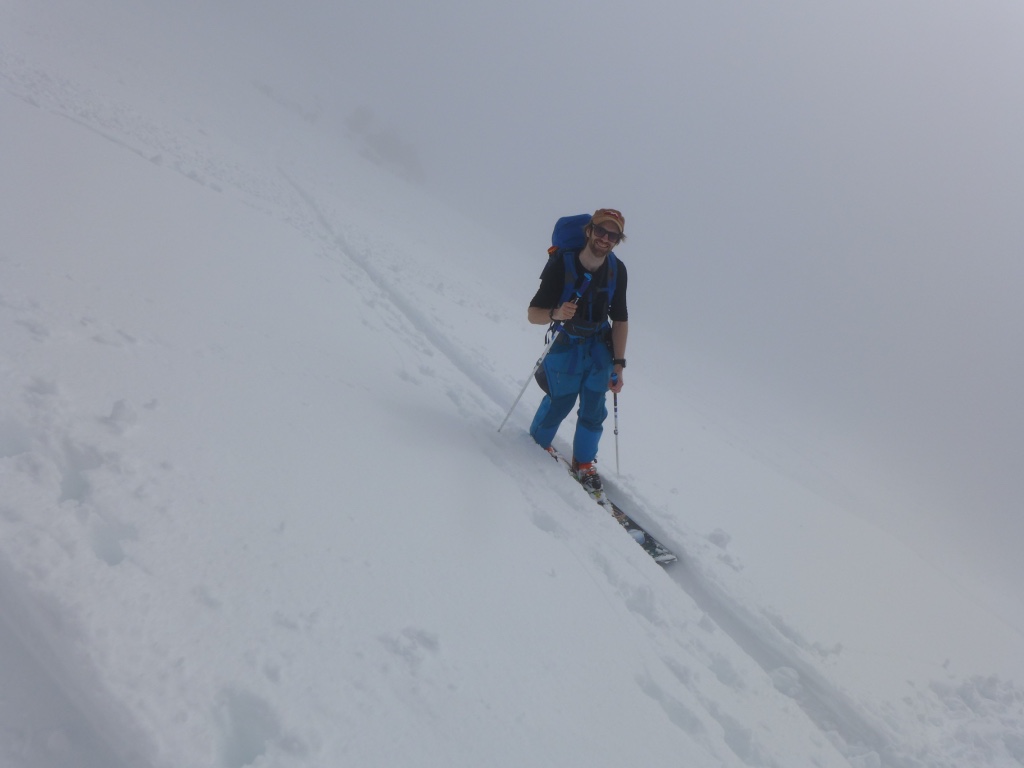 Audun in the fog. Note the chunks of snow in the background - those came down from above!

Imperceptibly at first due to the fog, the slope grew less steep. I continued to hear rumbles to my right, made horrifying by the fact that I couldn’t see how much snow was coming down. At least we weren’t below it anymore, but what if we had to descend this terrifyingly steep slope with the snow pack collapsing around us?

As suddenly as it came in, the fog rolled back. Or rather, it rolled down and we emerged above it, into the sunlight and stunning weather we had enjoyed earlier. 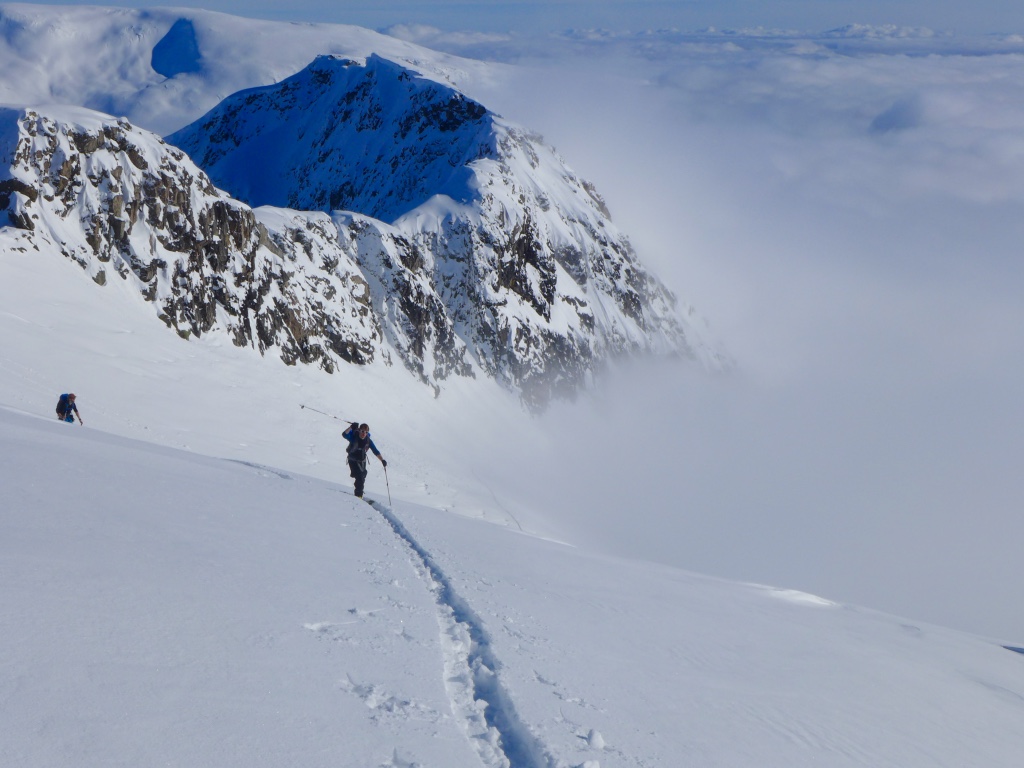 Audun (left) and Øyvind (center) on the final climb to Frudalsbreen, with the ridge line Lammenipa above the fog.

Soon we were on top of Frudalsbreen and had found our chosen route down the backside of the mountain. We stopped for lunch in the sun, nervously glancing at the fog behind us, hoping it wouldn’t creep up on us again. All at once it seemed surge forward, about to attack, and we all jumped up and got read to try and beat the fog down the mountain. The attack didn’t make it over the top of the mountain, though, and we were able to enjoy the descent in shadowed (this was the north side of the mountain) yet clear conditions. The skiing was a few centimeters of powder on a solid, wind packed crust - nice cruising, but nothing legendary. The descent was long and enjoyably graded though, and I definitely felt like I was "getting my monies worth" in terms of the effort of skinning uphill.

We decided to throw in a second, smaller top called Skredfjellet (literally "Avalanche mountain”) on our way down to the car. Skredfjellet is called “Blog mountain” by the locals, because everyone goes there to take pictures for their blogs. Guess what? So did I! 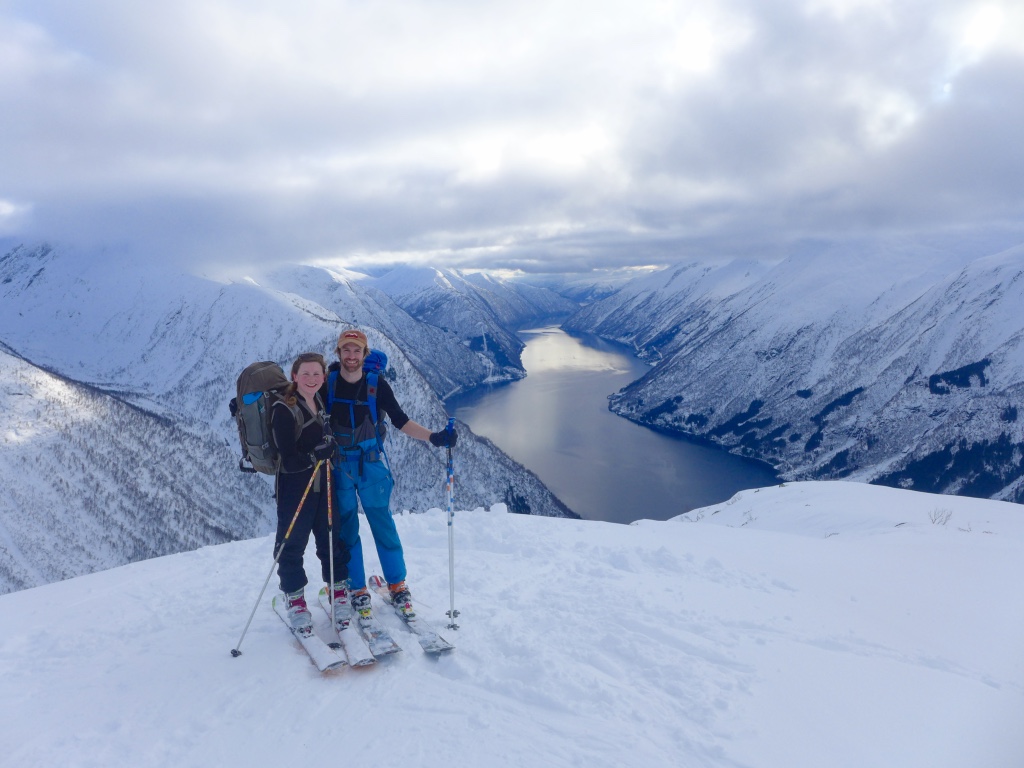 Audun and I enjoy the view from Blog Mountain.

The final descent to Fjærland was fun, playful tree skiing followed by a slide out on a rollercoaster of a trail. I arrived at the car feeling just the perfect amount of tired, elated and weathered by the sun. 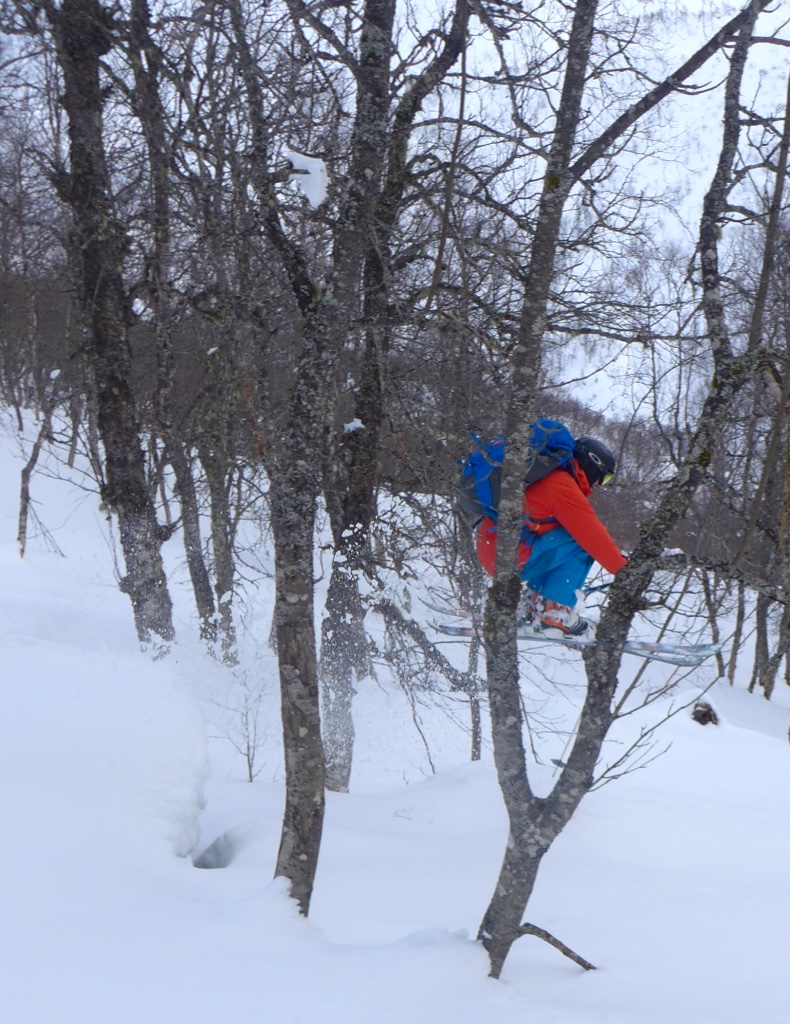 Audun playing in the trees. 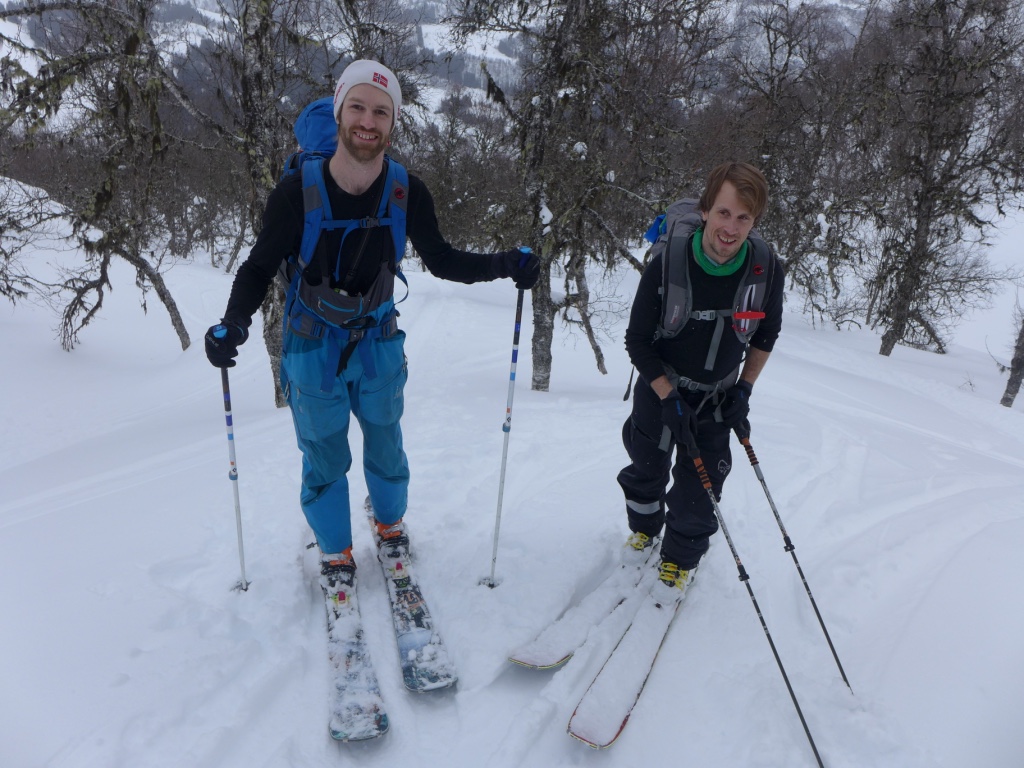 Audun and Øyvind chit-chatting in the forest of Skriki.

We skinned uphill slowly and took an exorbitantly long lunch break before break tree line and turning around. 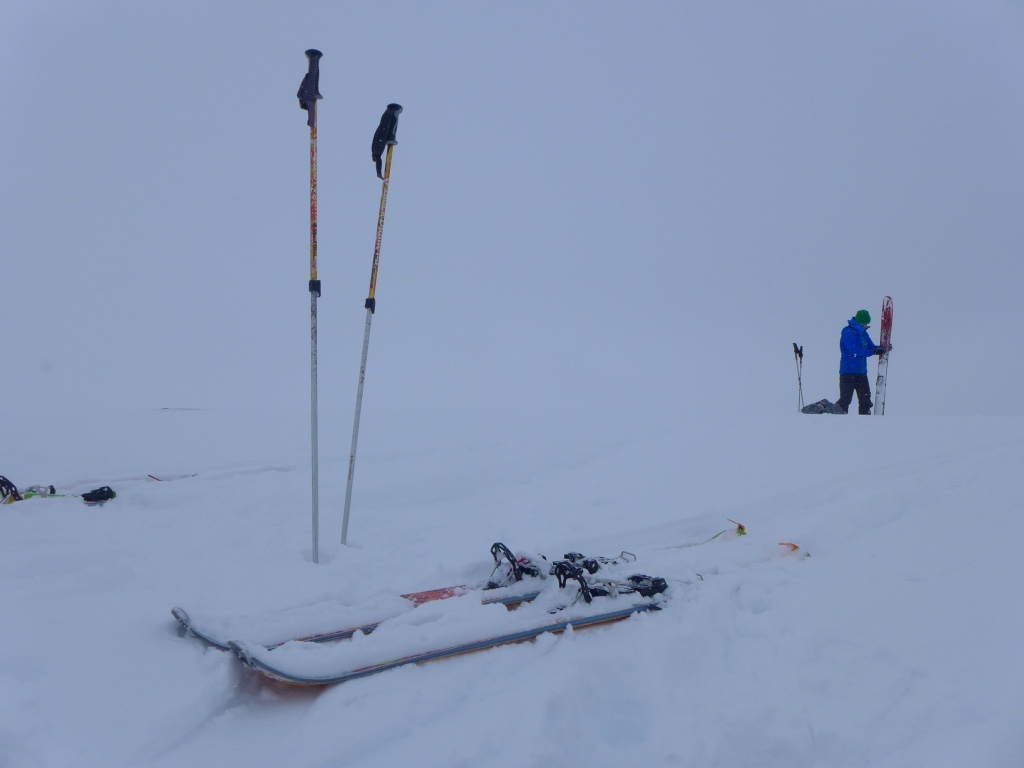 My skis and the ‘view’ from our turn-around point on Skriki. Øyvind removes his skins in the background.

The descent through the forest offered lots of possible lines and some good powder snow. Back at the car, we all agreed the shorter tour had been the perfect cap to a great weekend in Sogndal. Thanks for the visit, Ingvild and Øyvind. We’ll be back! 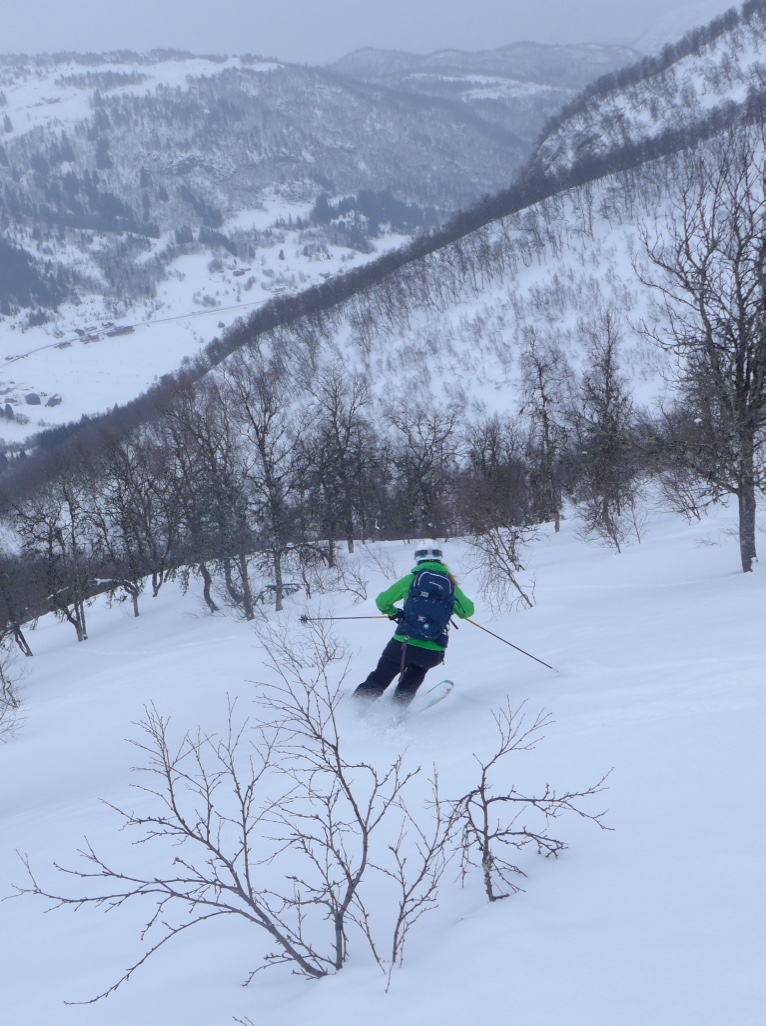 Ingvild enjoying the snow on the descent.

Here’s a recap of my training last week:

Monday: Just like last week, I did my long run on Monday, this time after work instead of in the middle of the day. Although I got home from work fairly early, I was still competing with the sunset for the last of the light. I drank a big smoothie before running because I thought it would digest easy, but it just sloshed around in my stomach for the whole run - not the best option! 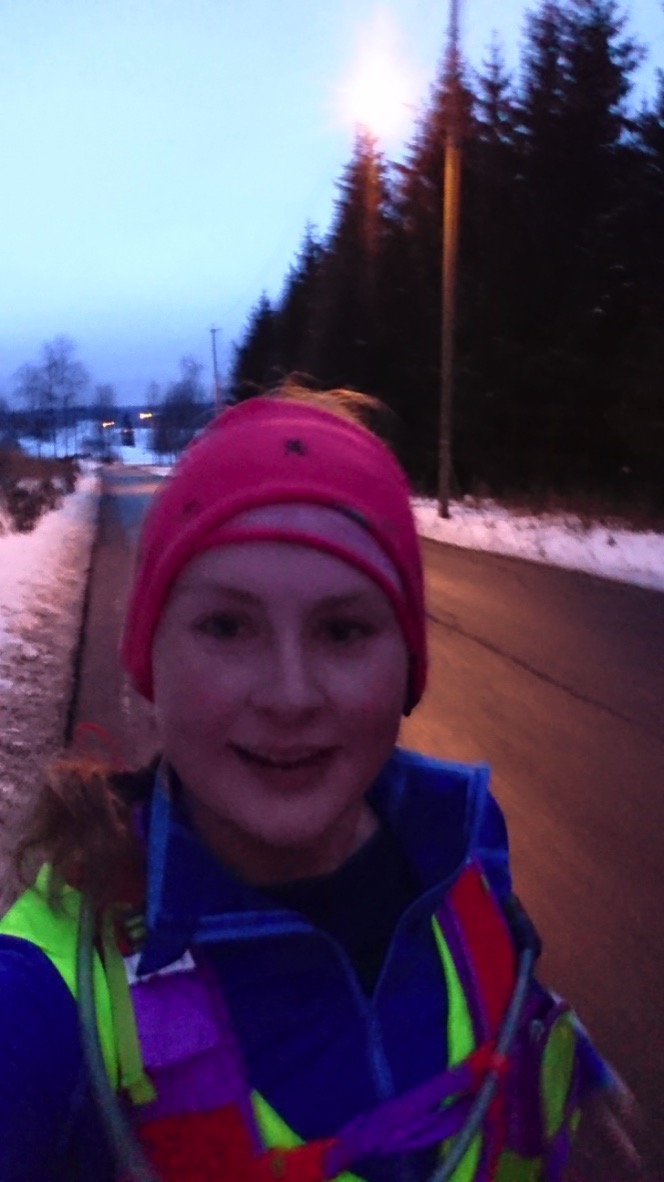 Following a similar route to last week, I ran along the magical trail that only exists during winter along Maridalsvann before picking up the road. After I turned around and headed back towards the city, I sucked down a gel and started to progressively pick up the pace, working from the 6 min/km that constitutes my long slow distance speed up to 4:50 min/km. Focusing on keeping a faster pace helped stave off the boredom of the final miles on the road. All in all this felt like a good workout, where I got to practice a little leg speed without becoming overly fatiuged. A couple of skeptical deer on a field in Maridalen.

Tuesday: A bike commuting day, to and from work and then to and from the city center for dance class. Relatively fast riding due to the aggressive salting of the bike paths, but I misjudged the temperature and spent most of the regretting that I didn’t where my shoe covers as my feet got really cold. Total: 39.9K, 482 vertical, 2h24min + 90 min dance class

Wednesday: Unintentional rest day because of a long day at work. Spent part of the day in a clean room, which meant I got to wear this outfit: 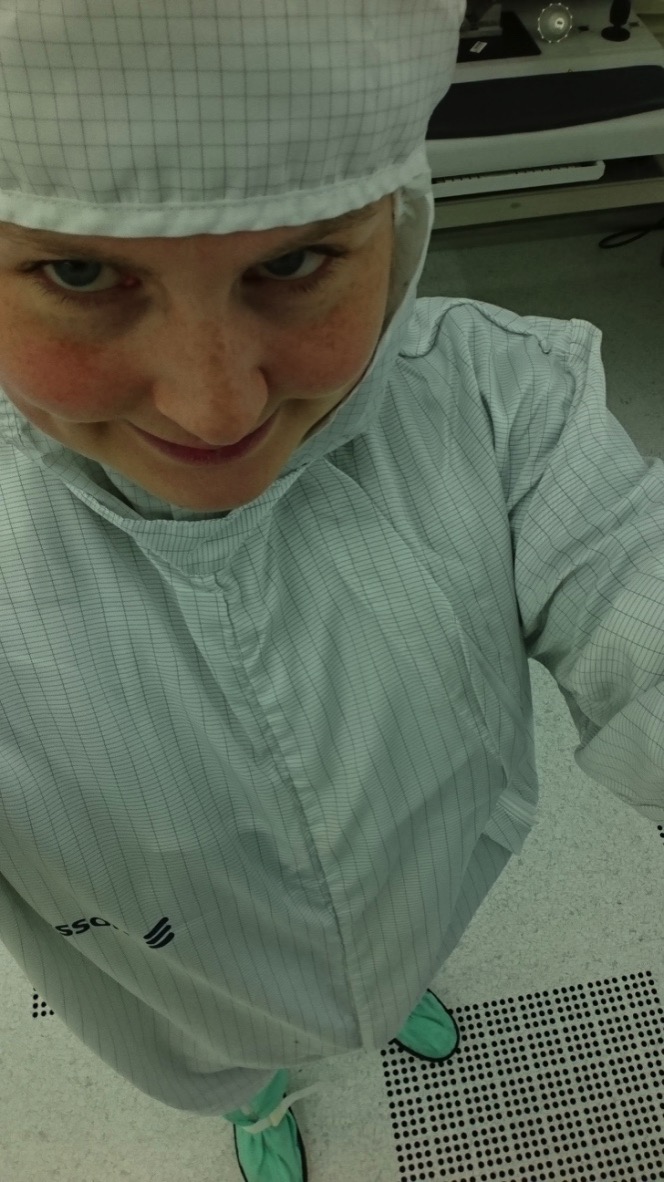 I regretted not doing yoga or something in the evening because I was feeling kind of stiff and weird.

Thursday: Workout at Bislett, the ‘Pyramid of pain’. Audun was feeling sick and so didn’t join me, and I realized again that running around a track in a circle is kind of boring, but also fun because you feel fast. 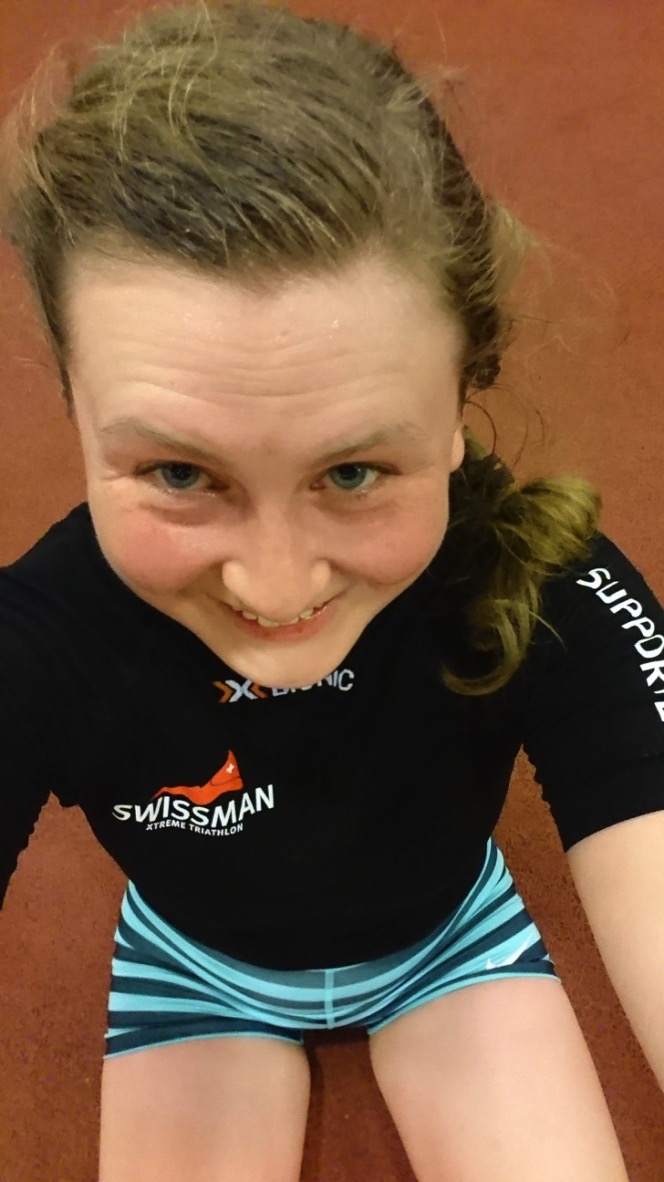 I put on some fast shots and went to the track and ran fast.

Friday: AM shake out run up the river. Basically felt awful the whole time. Thought it would be like last week where I would run off some of the weariness but that wasn’t the case. I still don’t understand how my body works sometimes! 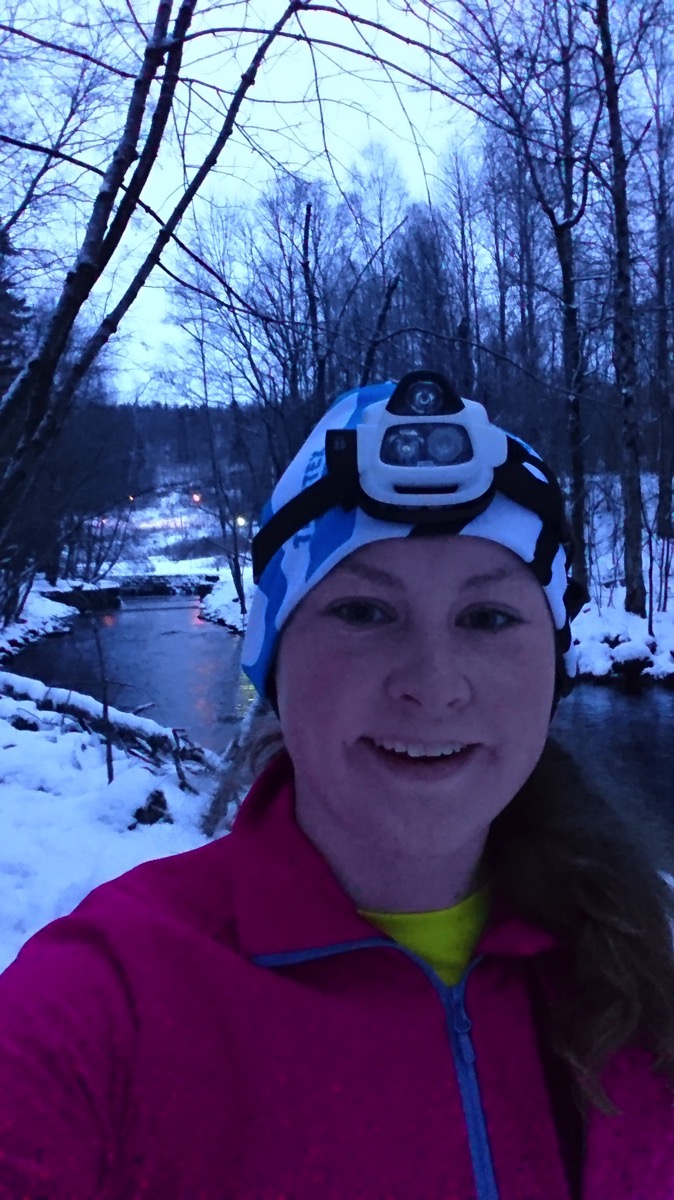 The river is beautiful even when I’m tired!